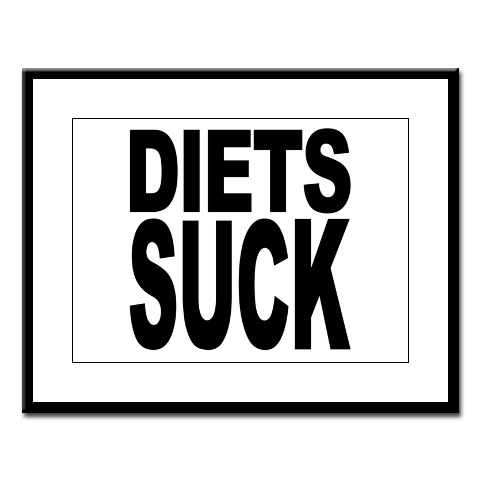 Diets suck. I am sure many of you will agree with me. Dieting or being on a diet or lifestyle change or journey or whatever you want to call it comes down to this:

There’s no pill, shake, pre-made meal(s), or anything else that is going to get you to LOSE WEIGHT and KEEP IT OFF.

Whatever you do to lose weight, you should do to maintain that weight loss. Why do you think so many of us end up gaining weight back? Because we did whatever we had to do to lose weight and then we went back to our old habits. Some of those habits are real challenges that we need help getting over. Some of us are binge-eaters or emotional eaters. We can’t just lose weight and think that ALL the problems are going to be solved. In fact, it may uncover even more problems, or problems you never wanted to face but are now in your face.

I’m not going to lie, I have a history or dieting, that is for sure, and I know I learned a lot of that behaviour from my mother (bless her) and other women (and men) in my life. I remember my mother being on Weight Watchers long ago, popping into meetings with her to weigh-in at some church in town. Later on we went together. The first time I joined weight watchers was in 1992 I believe. That was a good time. We actually worked hard together to lose weight and get fit. We went walking and swimming together. It worked. But alas, I gained the weight back that I lost. Life got in the way and I never fixed the reasons why I was overweight in the first place.

I lost the weight, then I maintained it for around 3 years. I had a huge support system. Online friends, real life friends. In fact I had a whole posse going with me to Weight Watchers every week. Many of us saw great success. It was a good time. I was extremely fit. I went to the gym regularly, I saw a personal trainer, I cycled to work every day, I got up early and did sit ups and worked out on my elliptical at home.

Sadly, my life took a turn (self-inflicted) and that’s when it came to light that whatever it was I really needed to fix in my life wasn’t weight, it was in my head. I gained all the weight back. Plus.

I “tried” a few times to get restarted again, but my head wasn’t healed, not until 2009 when it all clicked again. My friend dying at a young age (most likely related to weight issues) sealed the deal and I haven’t turned back.

I finally quit Weight Watchers in 2011 – the new program wasn’t working at all for me (but it’s probably NOT the program, it’s what’s going on in my body) and it was only frustrating to pay for something that was not giving any result. Yes I worked the program, so I’m not blaming Weight Watchers. I still believe it’s a program that really helps people get a better idea about nutrition and portion sizes. But that’s not all we need of course.

I saw a dietitian at my gym who told me I had to eat more bread. I told him I didn’t want to eat so much bread as it didn’t satisfy. He said I had to do it this way and I had to come in three times a week and work out for 75 minutes each time, I should lose 2KG a week. He also said only one hot meal a day. I thought he was mental. I had visions of killing him whilst on the treadmill. I decided to stop that nonsense after a few weeks.

I saw another dietitian who was actually willing to listen to me and embrace my non-Dutch ways of eating. She gave me some suggestions especially for in between snacks when I was hungry. She was completely baffled by my food logs and intake that I wasn’t losing any weight, especially since I was very active with running, cycling and gym. She had me do some blood tests. They found nothing. I stopped seeing her. Apparently there wasn’t much that she could do.

Update: 2017
I’ve seen at least 2 dieticians since I wrote this. Both were more for sports/ athletes. I have actually figured out that I am too lazy/ unwilling to follow something someone tells me to do. From the last dietician I actually incorporated some things. Plus she gave me some good tips about fueling and hydrating whilst training or running long distances.

My Fitness Pal
After quitting Weight Watchers I tried intuitively eating for a while. That doesn’t work, the scale just goes up. Intuitively I CAN eat an entire pizza, yes. So I joined MFP to at least keep myself in check. I am kind of a numbers geek so I liked seeing how the day pans out especially with planning ahead. The support there has been great too. I can’t say though that I’ve lost weight because of MFP though, it’s just the support I really need (I seem to have always done better WITH someone) rather than an actual provided diet.

Update: 2017
Still on MFP. Want to join me there? My user name there is “runlaugheatpie”

New Personal Trainer and Modified Paleo
In February this year (2012) I started with a personal trainer. He asked me to try a modified paleo diet. I was against this. I didn’t want to diet anymore. Of course I care if I lose weight but I needed losing weight to stop being a huge factor in my life. I agreed to try because I was after all paying the guy. But I was angry in the beginning. And felt obsessed again. Now things have settled down a bit and actually it’s OK to eat this way. And I have lost weight. After Two and a Half long years the scale is actually moving downwards again.

Basically no grains at all. No dairy. No beans.

But I do have a bit of dairy – yoghurt, cottage cheese, goat’s cheese. Pasta I’ve given up. Bread 90%. Rice 90%. Beans I am learning to live without but will eat black beans in this amazing chile con carne that my husband makes.

Currently I’m looking into the differences between primal and paleo. Seems rice and quinoa are OK. There may possibly be other differences. I have a lot of research to do.

Update: 2017
Nope, no paleo and no primal. Do I watch what kind of carbs I eat? Yes. Do I make sure I get enough protein? Yes, that too.

The point is, no diet is every going to satisfy every factor of your life. No diet is ever going to be the full answer. You have to fix your head and you have to experiment and you have to BE PATIENT. No matter what, you also have to do something that you know you can do FOREVER for the most part. Of course diets work, for the short term, but you have to find YOUR diet, for YOUR body. You are unique, there is no straightforward answer to getting you healthy and feeling good and again, if you don’t fix your head you will always end up back at square one OR be in a constant struggle with yourself.

I’m done with dieting. I’m a work in progress mentally, physically and emotionally. I have time. I’m going to be doing this for the rest of my life so I may as well enjoy the ride.

Here’s the thing – I need something more than an online group or a place to log my food. I don’t disagree with eating less grains and more natural foods, but it’s not sustainable. I need to go to a meeting (I guess like an alcoholic or drug addict would do) to be accountable to people in real life who are going through the same thing. Not to say that my dear friends aren’t supportive, they are, it’s just, well, different. Anyway, back in September 2013 I signed up again thinking I’d do it for 3 months and I didn’t do a damn thing at all (but have been paying for it since). I decided to go back to meetings now that I can actually attend a meeting and hopefully this is the gentle nudge I need to do this again and come back to my goal weight. Good news, I am still maintaining a 15KG weight loss that I started back i 2009. So all that running has at least kept me from not going in the wrong direction. While I said I was “done with dieting” and I am, believe me, I still need some guidance to learn and get my head in the right place. Losing weight is actually fairly easy, the hard part is actually understanding why you do what you do and how to get control of emotions (which is where my weakness is… Emotional Eater, table for One, all you can eat buffet please). So don’t think by any means that I am dieting (or clean eating or whatever other thing you want to call it. I am still overweight by 12KG and I want lose that weight and be healthier and stronger and better in my fitness. I need help and support to get there.

Update: 2017
Nope, no more Weight Watchers. Officially done with it for the final time. Mark my words, I won’t be going back. WW is not for athletes. I’ve got to learn this on my own.

This site uses Akismet to reduce spam. Learn how your comment data is processed.