Life was busy before and leading up to the Half and didn’t stop. With a few days break I’ll soon be off again, this time traveling to Rwanda with my company!

But the HALF in Berlin! What a day! Let me tell you what happened leading up to the day…

Normally I wouldn’t drink or eat out a few days before but a friend of ours turned 50 on the Thursday and asked us to come out at least for a glass of champagne straight after work. Of course, we obliged. Hubs and I went and had pizza (my eating/ food habits are out of whack at the moment anyway) afterwards so that we could get home early-ish and get packed up.

Saturday morning up not too painfully early, got ready and headed out at 8:30 to pick up M. She doesn’t live far from us and is actually on the way to Düsseldorf, where we happened to be flying out of to get to Berlin. The weather wasn’t so great in the Netherlands or in Germany; I’d been checking for days and it was snow, snow, snow, but funnily enough on the forecast showed a giant sun with a few clouds hanging around and warmer temps. We were keeping our fingers crossed that it wasn’t too good to be true. 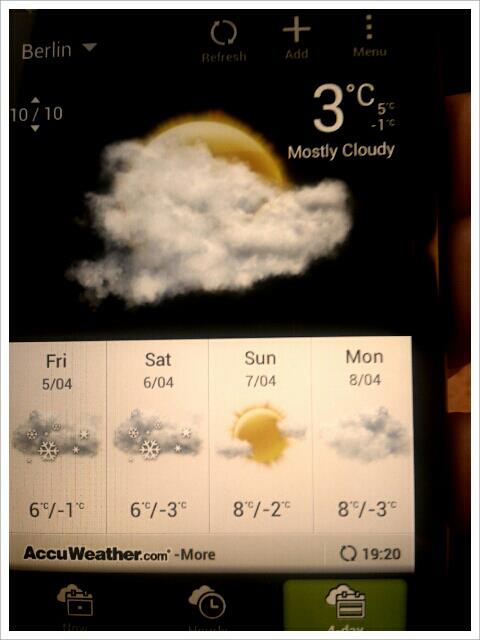 Things went pretty smooth – picked up M, were early enough at the airport, got ourselves some yummy coffees and a bit of food and eventually headed to our plane. We were off! The flight’s pretty short so it was uneventful and we arrived in Berlin with our bags being almost the first off the flight. We then figured a taxi split would be easiest – Berlin airport (Tegel) is right in the middle of the city so it’s not expensive really to get where you need to be. Found our hotel, checked in and then all decided a nap was in order!

My friend Alex. who used to be my colleague in Amsterdam, is from Berlin and moved back about a year and a half ago with her boyfriend. She happened to be volunteering at the Half and was kind enough to pick up my race packet! This took some stress off – otherwise I’d have had to immediately go to the Expo after checking into the hotel and we didn’t have a lot of time before the Expo was closed. Alex and I arranged that she would drop by the hotel and at least we could have a chat and a coffee and I’d have my race materials as a bonus. Alex was right on time and as lovely as usual to see and it was great getting a bit caught up! A while later she had to go and we all needed food as well and besides we had a big day ahead Sunday so we didn’t want to be too late!

We headed off towards the Alexanderplatz and about midway turned down a street that looked as if there were a few restaurants and we were right! We settled on Italian (I didn’t think Mexican or Korean would be a good idea…) and instead of pasta carb-loading I had risotto and a salad. Oh and a beer :) Seemed like a good idea anyway.

Back at the hotel I had a bath and got my stuff all ready for the next morning. I actually slept pretty well (the hotel bed was huge with fluffy pillows and blankets) and was up Sunday morning around 6:30 to get ready in a non-stressed way. We had decided the evening before to meet for breakfast at 7:30. There were a LOT of runners at the hotel (we were only 3KM from the Alexanderplatz, which was near the start/finish) and I didn’t want to be fighting for a table at breakfast. I was pleasantly surprised to see a HUGE breakfast room with an amazing array of different types of foods. No worries at all to get a table. I was feeling a bit nervous but made sure to eat properly (and vowed to eat all the things the next day as I didn’t have to run a race) and once we finished we went up to the room to finalize my bag and my stuff. Right before we went downstairs I just panicked and had a little cry to my husband – what if I was going to fail? I felt so nervous but I knew I did everything I could to prepare (did I?) and there was no reason to worry (was there?).

We decided that walking the 3KM to the start was the best idea. I wouldn’t take that long, right? Wrong. It actually took longer that I imagined, but we were still on time in the end. I thought walking would make my legs super “warm” so I wouldn’t have to panic about not having enough time or space to do some warming up exercises (thank dog we did this and it was so incredibly busy – there was no WAY to anything once we were at the starting corrals). It was amazingly sunny and blue skies – a bit cold but perfect weather for running! 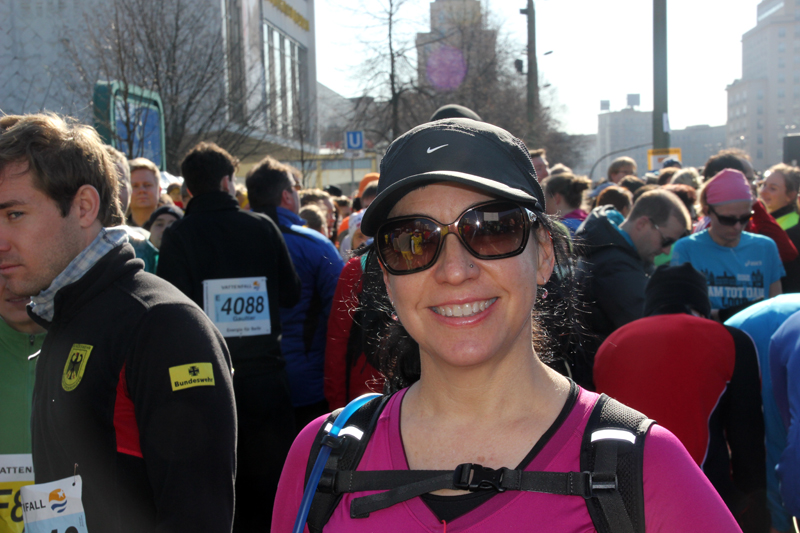 Eventually I said goodbye to Hubs and M as it was impossible to get into the corral. Hubs really wanted to see the elite runners and I just needed to somehow get into place. Start time was 10:05 and I of course was in the last corral. We were like sardines, all packed in, waiting to go. Around 10:20 we started moving slowly up to the front. At 10:30 we were off!

I had decided a few days before that I didn’t want to continually look at my watch or my heart rate. I just wanted to run and enjoy. I wanted to RUN the whole way. I knew if I thought about people who inspire me, people I love, and Lotte, the little girl with Epilepsy who inspired me to run for charity, I would make it through. I wore my “Because I Can” bracelet to think of Janet and my “Go the Distance” bracelet to think of Robby. I had a strange calm the moment we started like I really could do this!

There were no KM markers until 4 kilometers. I was actually happy with this because it felt like less than that! The route was fabulous, passing by so many historic buildings and monuments. I chose Berlin because I love it so much from an aesthetic point of view and it did not disappoint on Sunday! I eventually looked at my watch at 5K, 9K and 20K. I wanted to know where I was and if I was just intuitively on track. It was going well. At 5 I was around 31 minutes. At 9 I was at 58 minutes. Somewhere around 13 or 14 I was really starting to get tired. My brain wanted me to stop. I again thought about the ones who would get me to the next KM marker. Tammy. Robby. Janet. Lotte. Repeat. At 17 I was so happy because I thought at 18.5 I would be at Checkpoint Charlie. That would mean I was, for all intents and purposes pretty much at the home stretch. I ran through Checkpoint Charlie with a HUGE smile on my face.

I crossed the line and stopped my garmin at 2:23:24. My official time of the race was exactly the same. I DID IT!!!!!! Not only that, but I crushed my time from my first Half which was 2:41:49. Ladies and Gents that’s almost 19 minutes better than the first time!!! 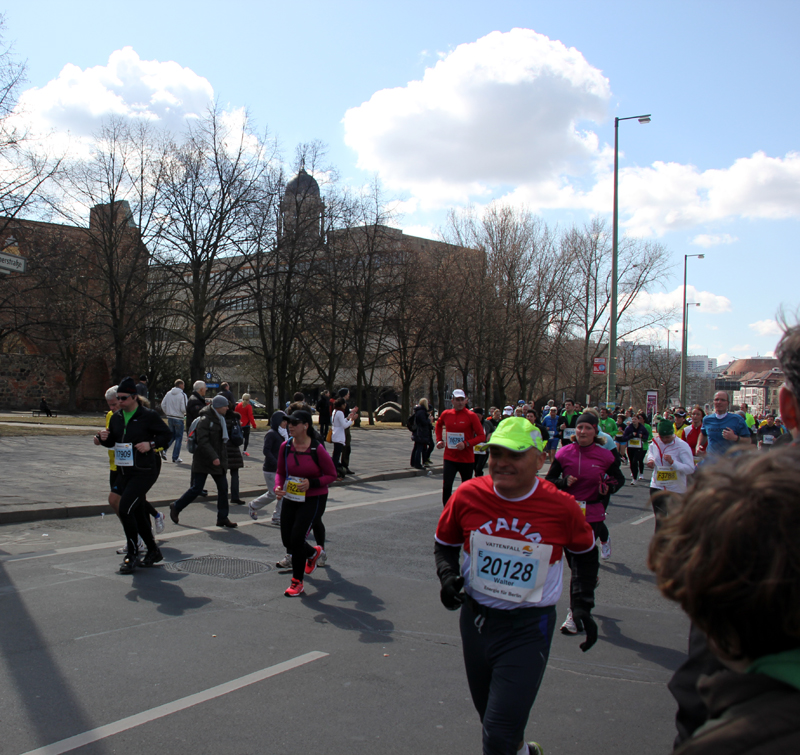 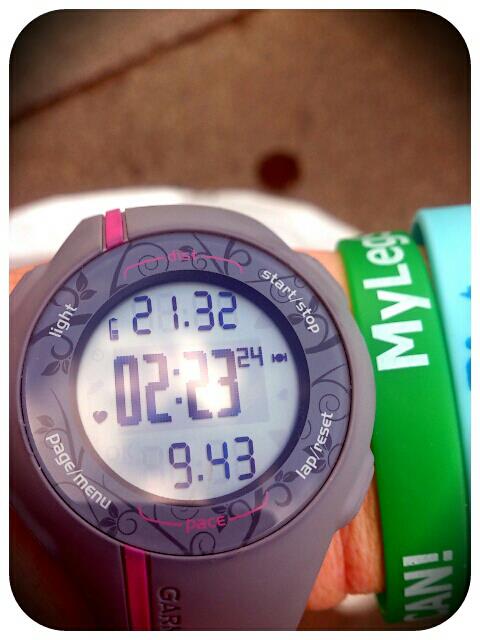 Once I finally found my posse we headed to Alexanderplatz for sausages and beers (as you do when you are in Germany) and later walked back to the hotel (making it more than 6KM just in walking around + 21K for the race), I took a nice hot bath, had a nap and we later went out to Mexican to celebrate. 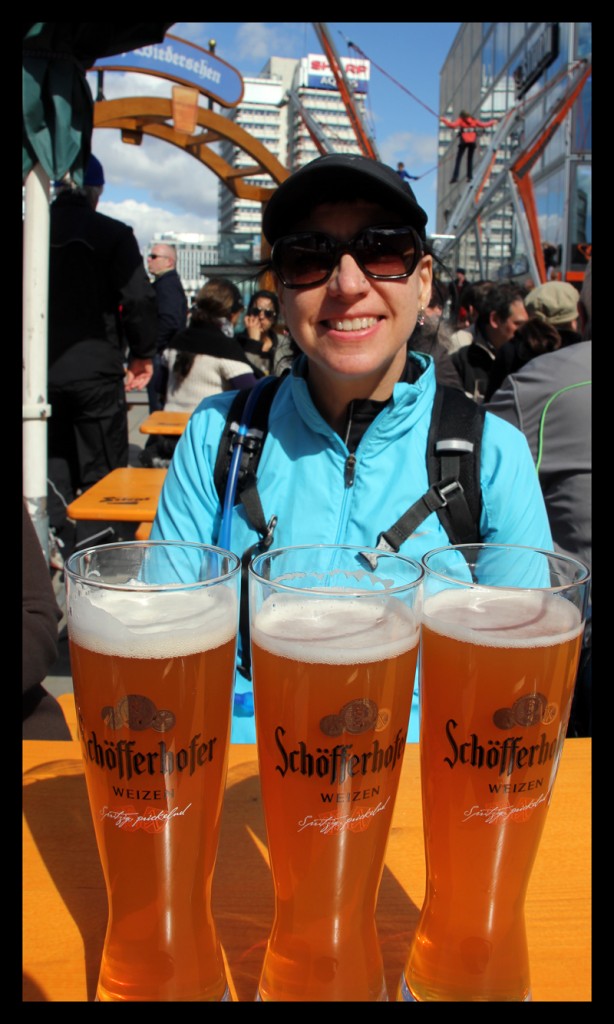 It was a great weekend, a great race and I am super grateful to everyone who supported me, especially my husband and M – it wouldn’t have been the same without them!

Since I’ve been home I’ve been under the weather and very busy at work. I haven’t done anything running or gym related. Monday I’m off to Rwanda. When I return I have a 10K in Hilversum. AFTER all of that I think my life may finally get back to normal again. Then again, I’m not sure what “normal” is…