I know a few weeks have passed now but honestly it’s been tough to actually put the feelings into words for my first marathon.

When I initially started training I did have a time in mind for my finish. At some point I realised that time wasn’t really going to matter much, the point was to finish. Still in my head, based on hundreds of re-calculations, I believed I could run this race in about 4:45. Please, G-d, anything under 5 hours. That’s where my head was at.

Kim and I had trained together and had decided to try and run the marathon together as well. I was very ok with this. Kim and I have a similar pace so we both thought 4:45 was more than doable.

I took the day off work to take care of some last minute things; physio, pick up a headband from RunnersWorld, give keys to catsitter, pack, get a massage. I think I spent more time doing things like cleaning, dusting and reading the internet than packing. I had several lists of things I needed. I kept checking the lists but I also kept avoiding the packing issue. Eventually I got it together and had most of my stuff ready. Hubs came home early and we went out to dinner at our local cafe (and SocialMile meetup point). 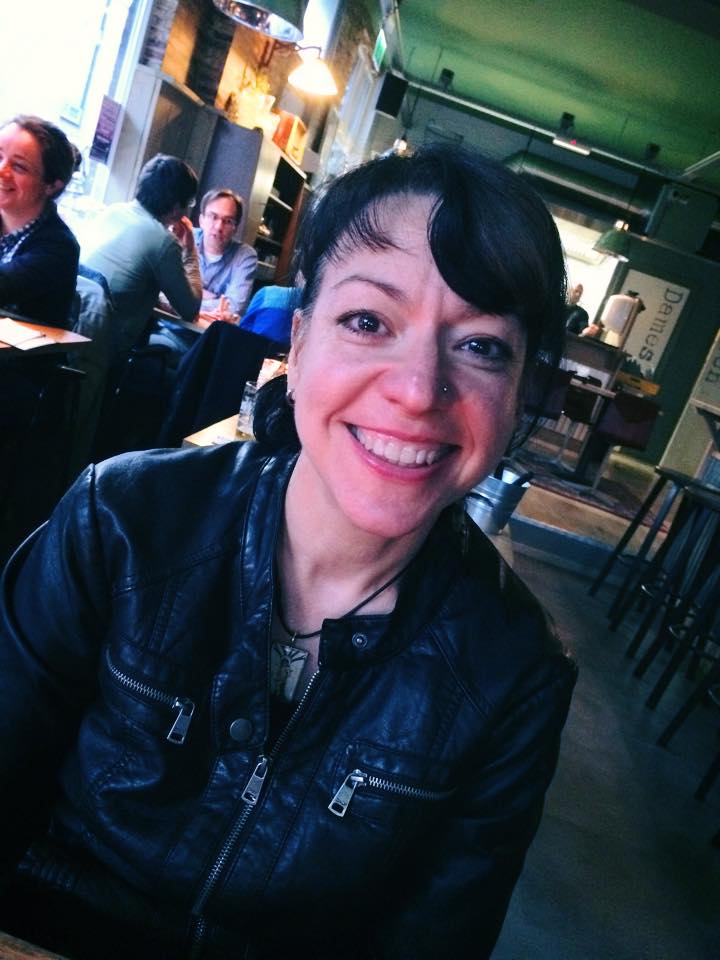 Friday Morning – We’re off to Paris!

The 8 of us (one is missing from the photo, since she’s taking the photo!) load up in the van we rented and we head off to Paris. 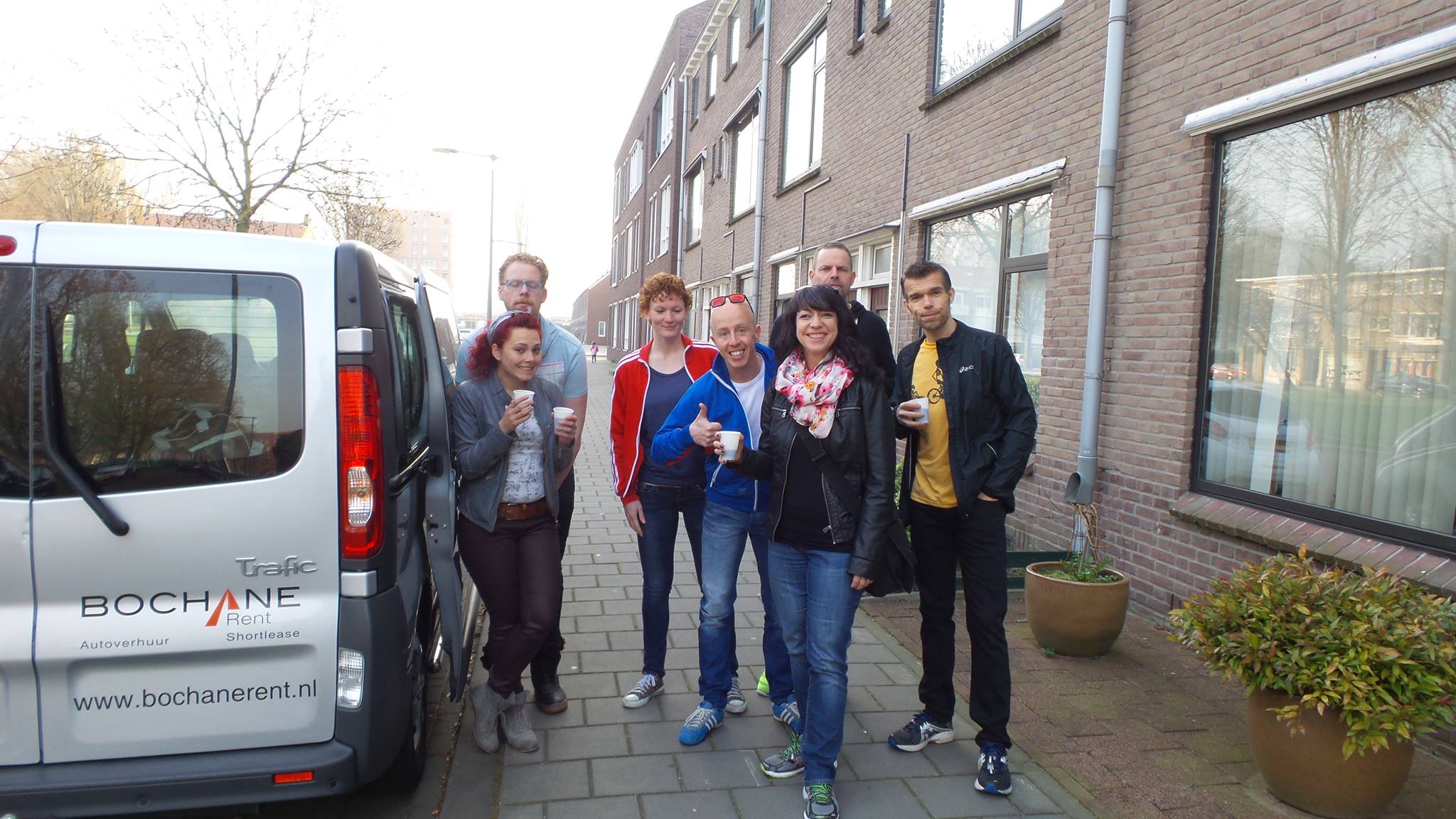 It was a comfortable ride, with the occasional potty break (thank you small bladder!), love birds in front of us and hubs doing weird things along the way: 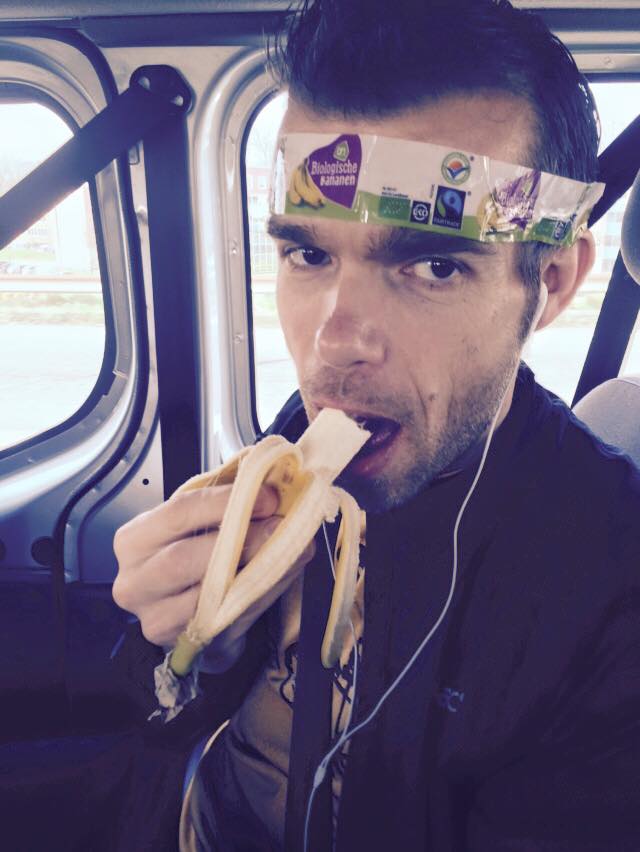 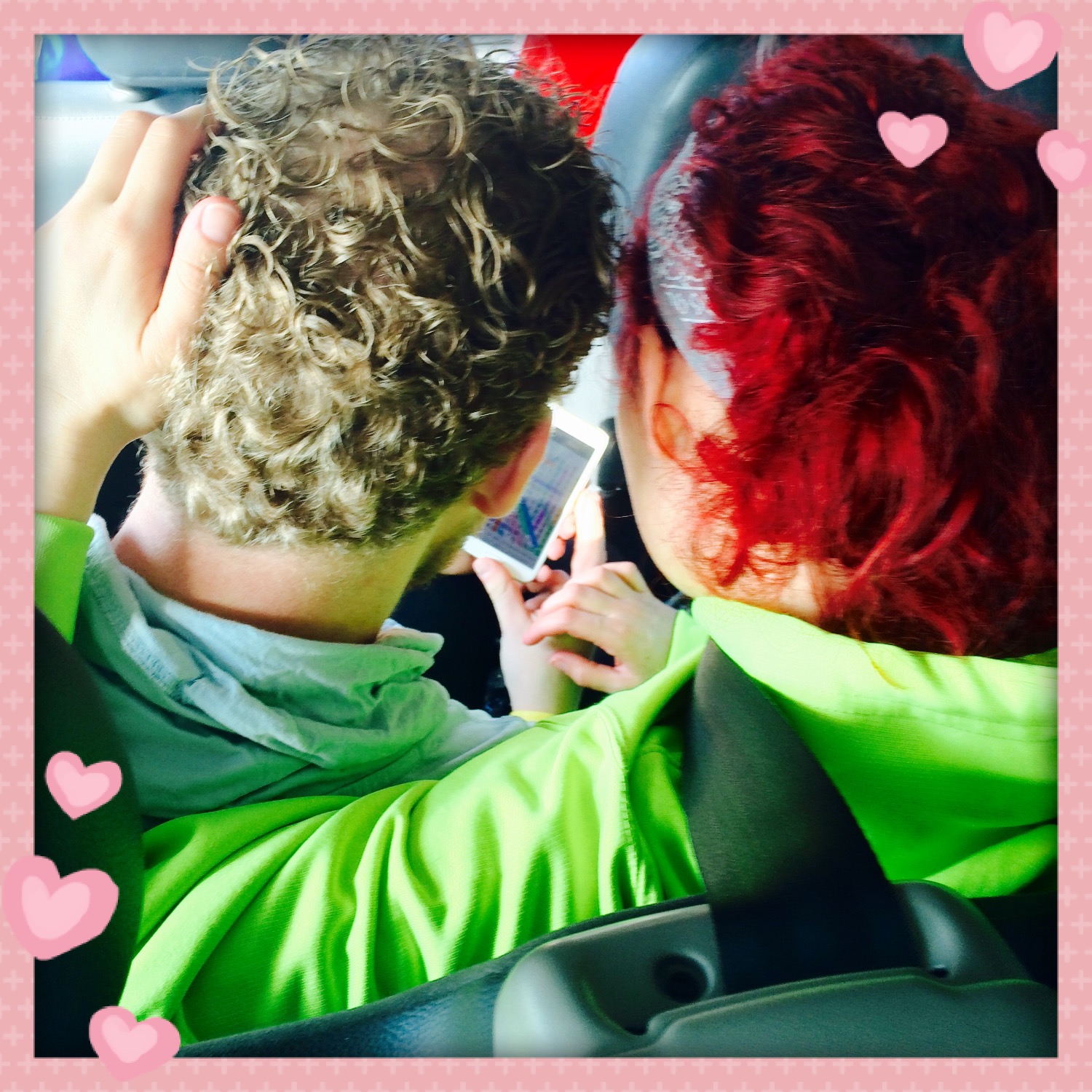 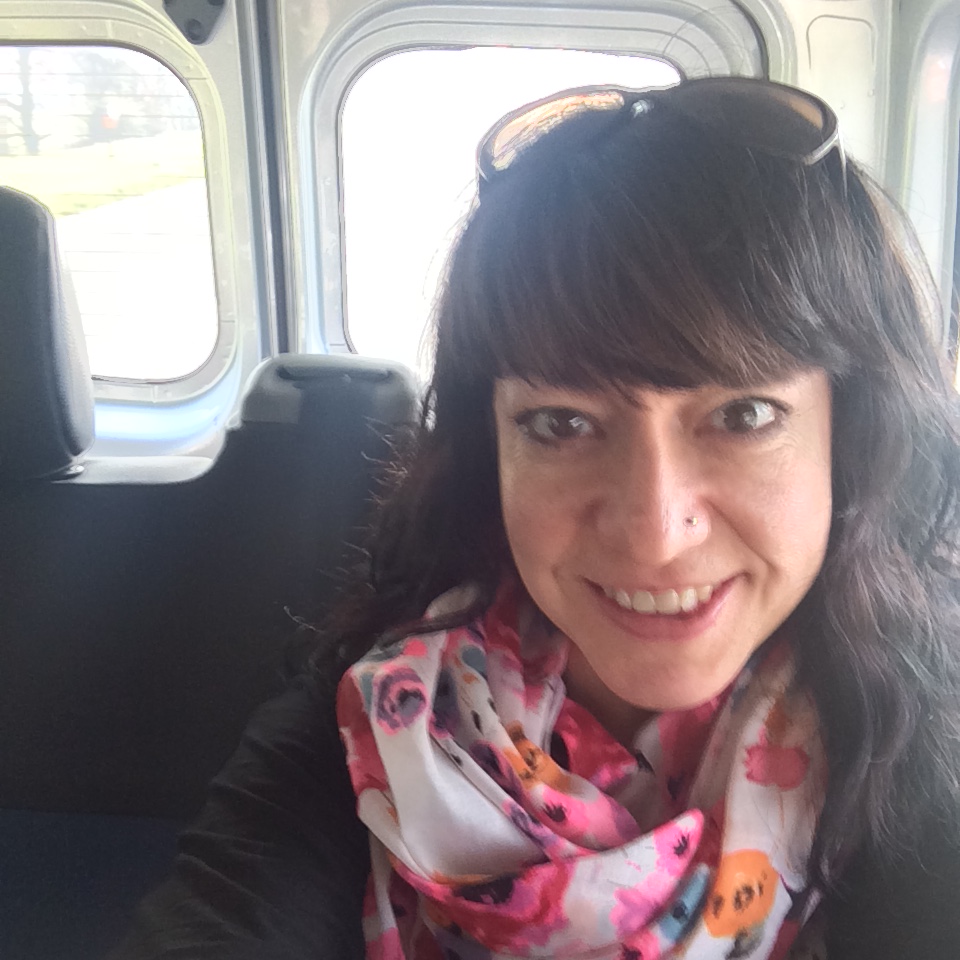 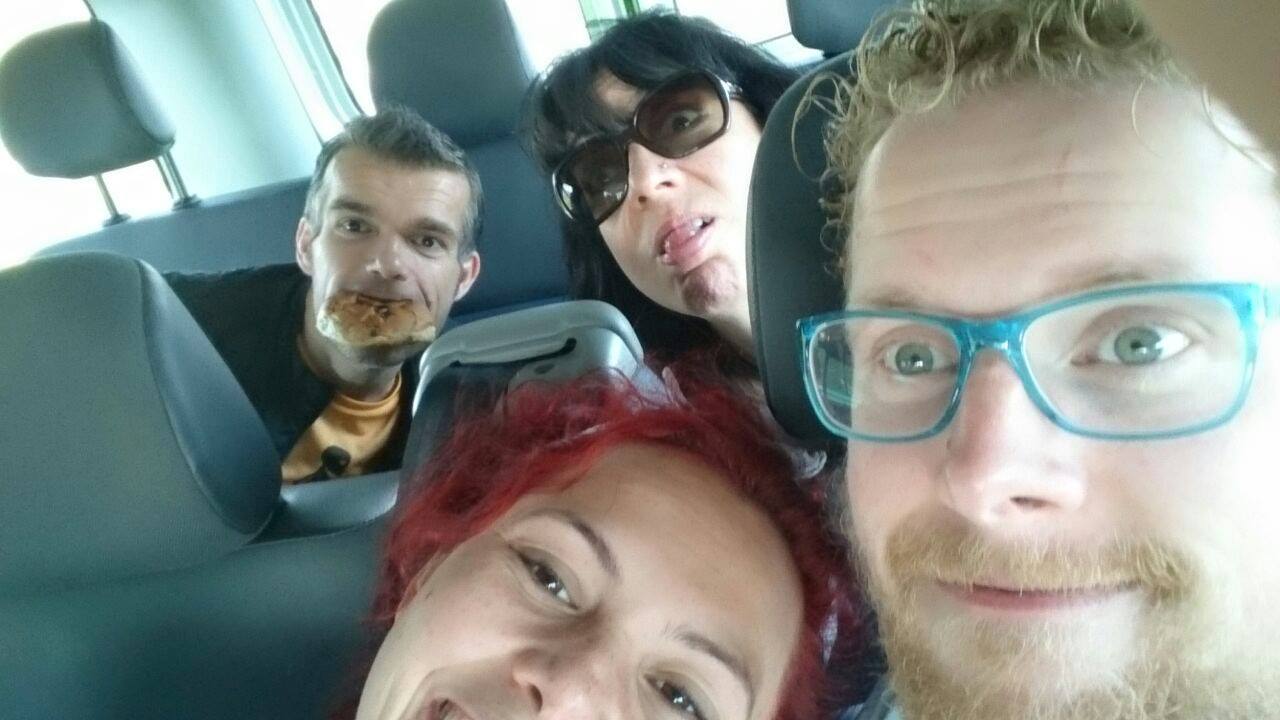 Basically we got to Paris without a hitch, found our apartment, parked the van for the duration of our stay and since we couldn’t check in yet, we headed off to the Expo by Metro to pick up our packets and get excited about the coming days (because we weren’t excited enough yet of course!!). 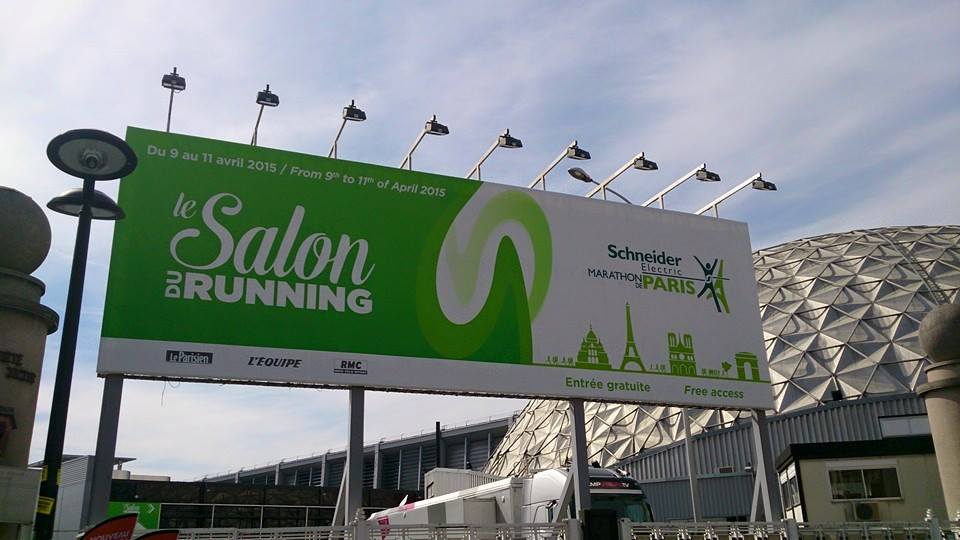 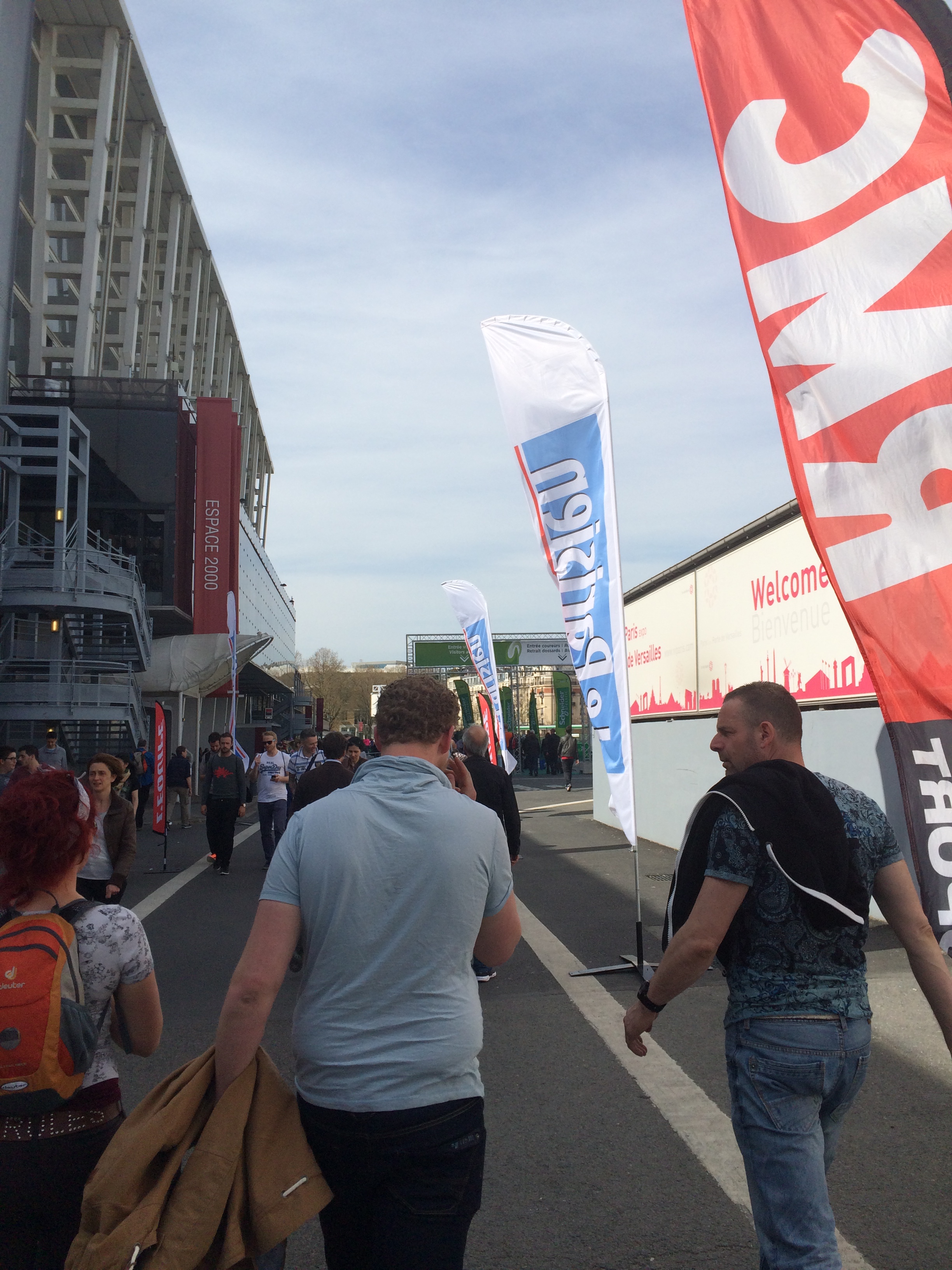 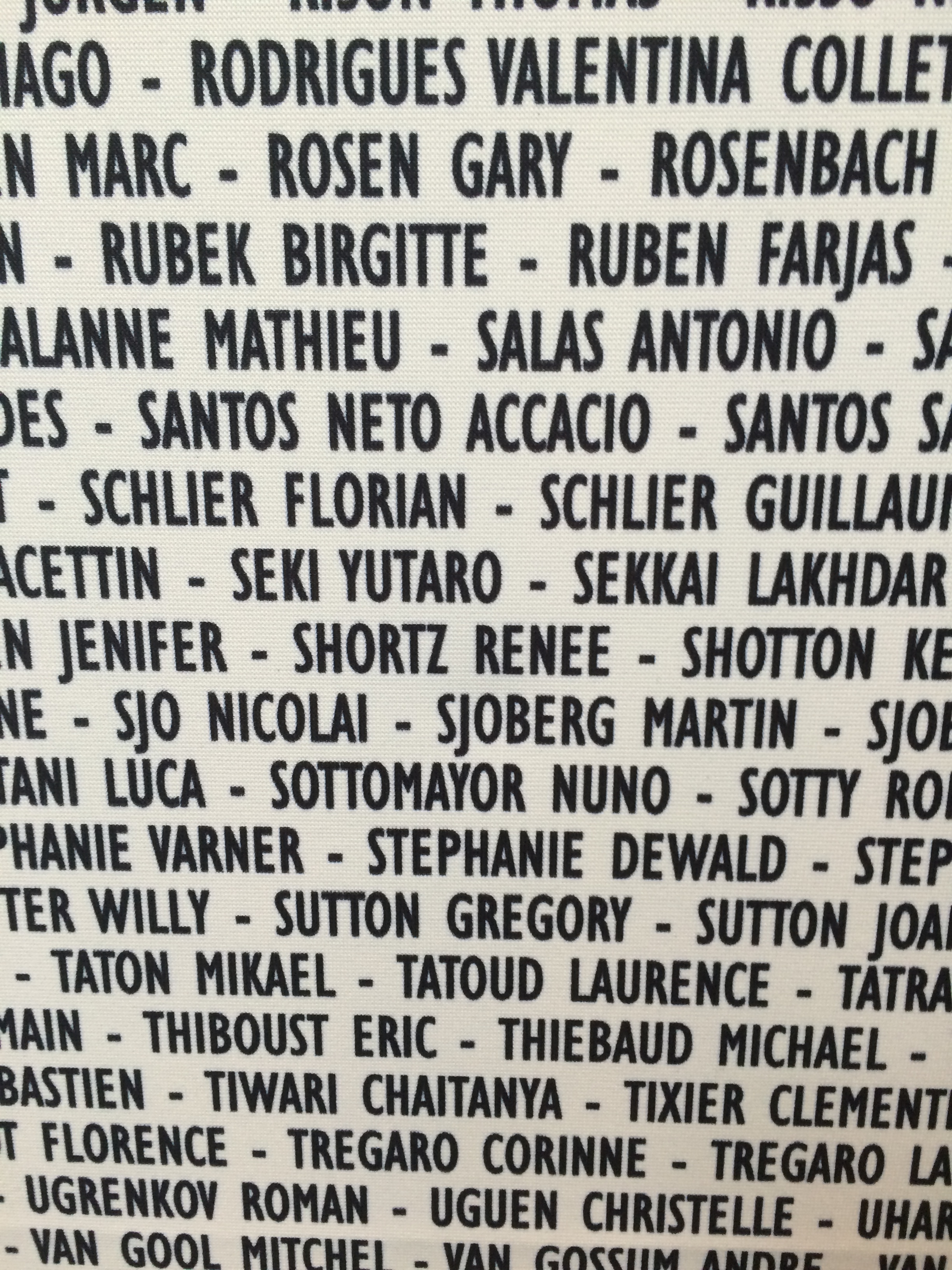 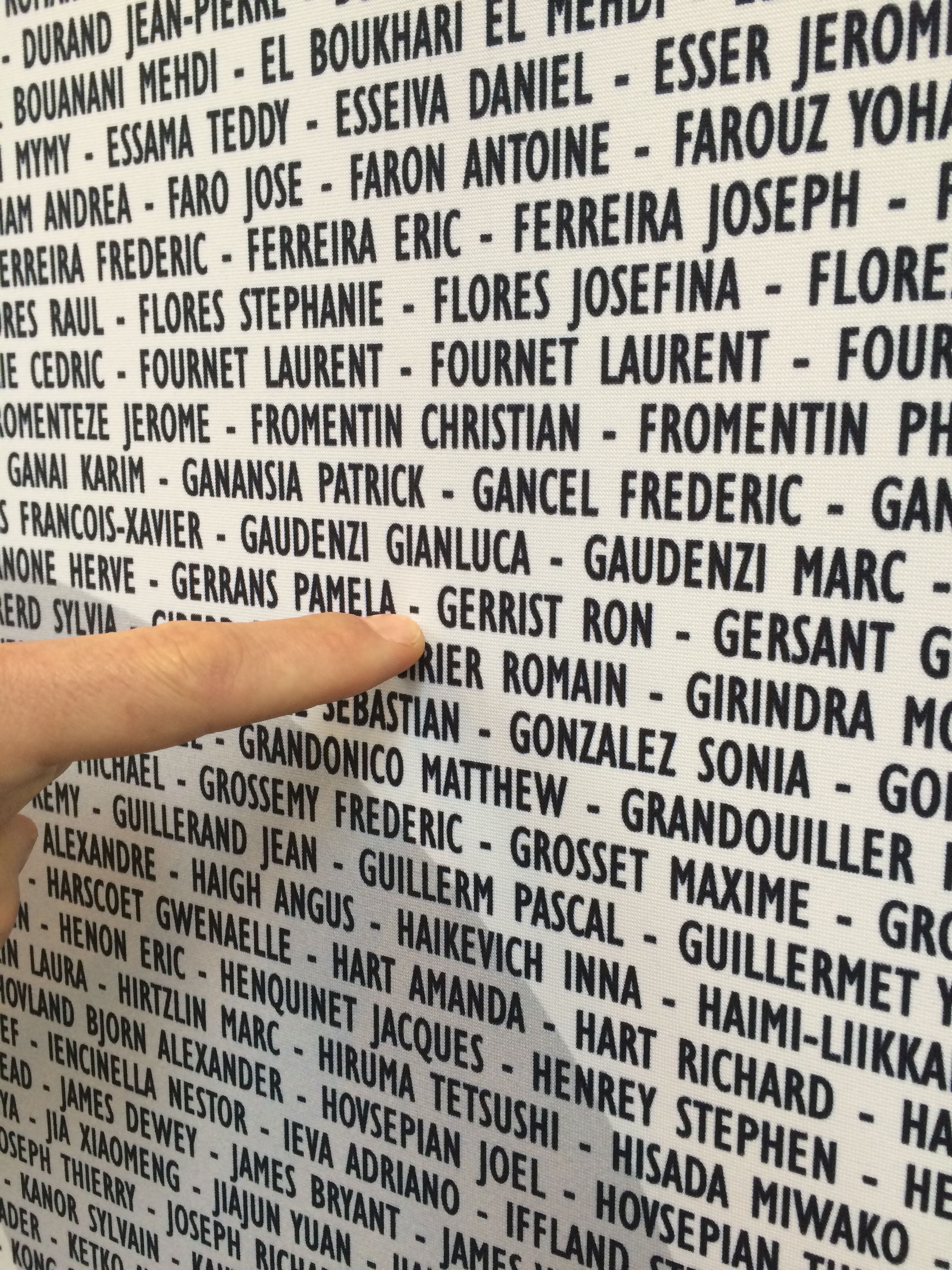 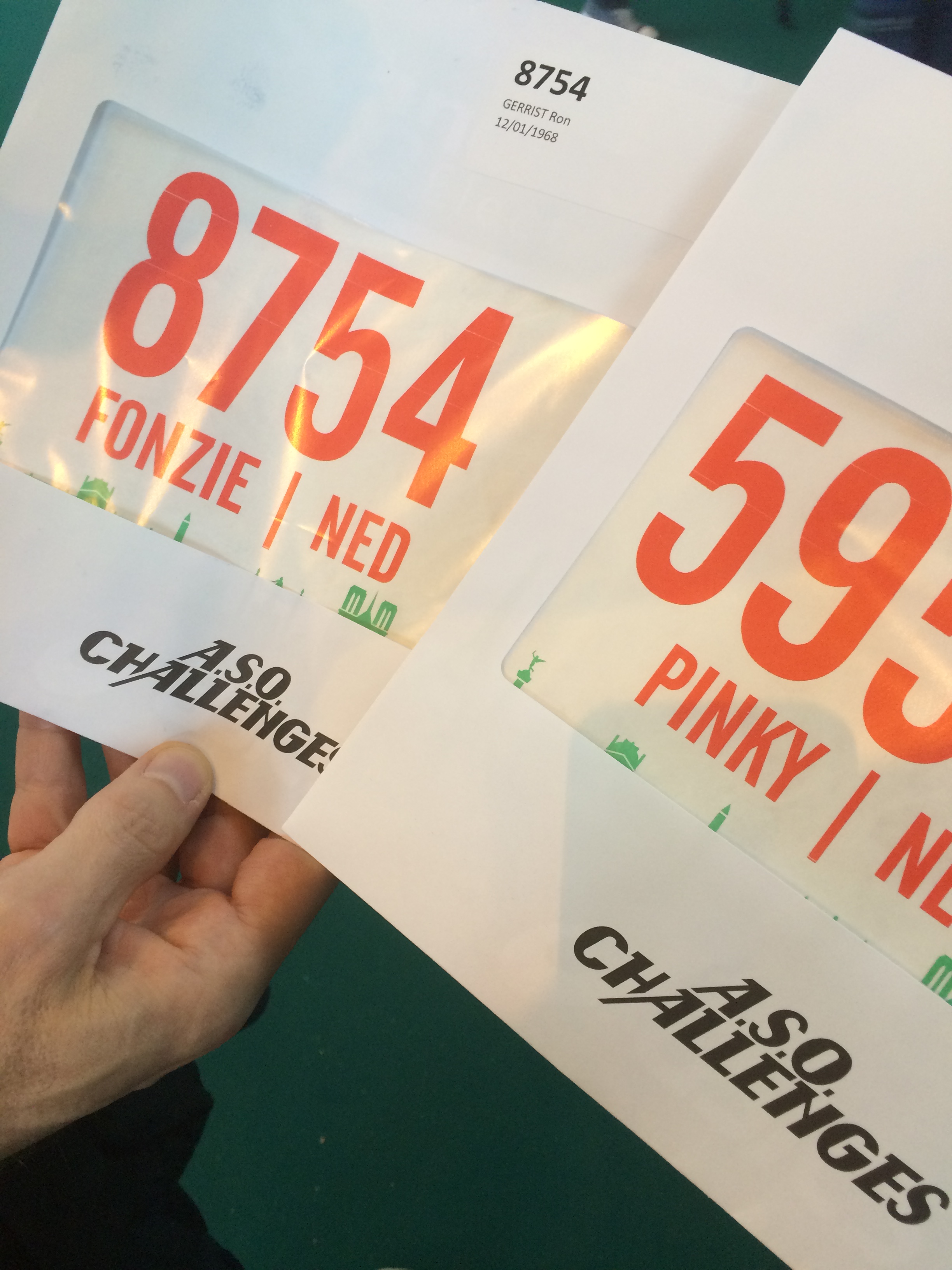 Luckily all of us running had our medical certificates accepted and Mr.Fox and Mr. K were able to change their start times (based on faster end times). We then also picked up our shirts for the 5K Breakfast Run the next morning. We looked around a bit at the expo and then left for all of us to get a coffee together before heading back to the apartment.

Once we were back at the apartment dinner was cooked up and served for the 8 of us and afterwards the hubs and I stayed in while the others headed off to the Sacre Coeur. It was time to rest since rest would be crucial for the next couple of days.

Breakfast Run! Super glad I signed up for this and in total hubs, Kim, C., Mr. Fox and I headed off to the Arc de Triomphe after a quick breakfast in the hotel. And, let us not forget Mrs. Fox, our greatest cheerleader! 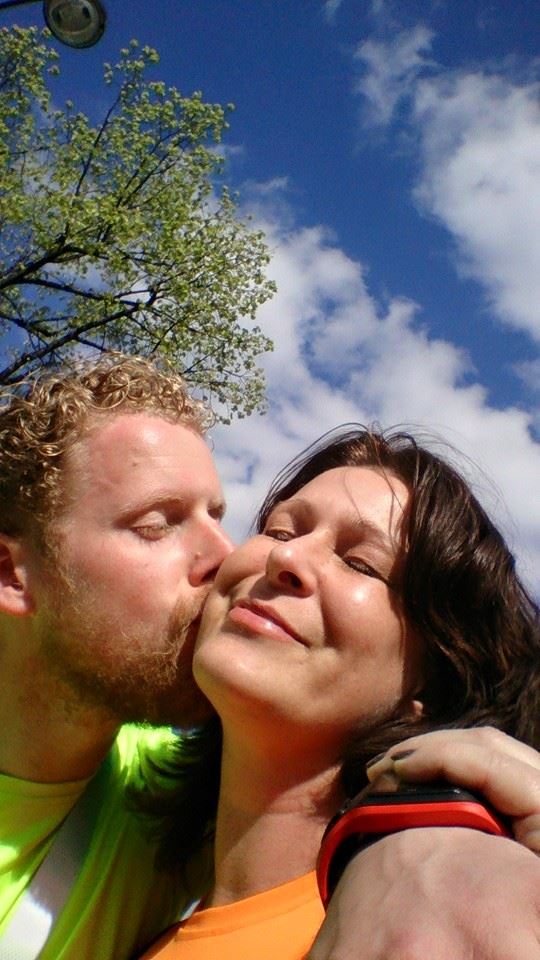 Right before the run, I “ran into” Stephanie, a Fitbloggin friend, and we had a quick chat before the start. Sadly I spaced and didn’t get a photo of the two of us.

The toughest thing about this 5K Fun Run was that it was realllllllly slow in the beginning… we were practically walking. OK, it’s a fun run and we aren’t meant to go blazing through the streets the day before the marathon but for some people the inability to even run at a slow pace (ahem *hubs*) is just a tiny bit frustrating. Anyway. During the run we noticed someone had a WESTERVOORT jacket on and if you have followed me for any length of time this name will be familiar… this is a neighbouring town where I very often can be found running. So Kim and I start chatting with the man and woman running ahead of us and it turns out to be Emma (and her husband), a friend of Sarah (who often comments – hey Sarah!) who I know only from the internet and a very brief encounter at the Stevensloop this past 15th of March. What are the odds, people! 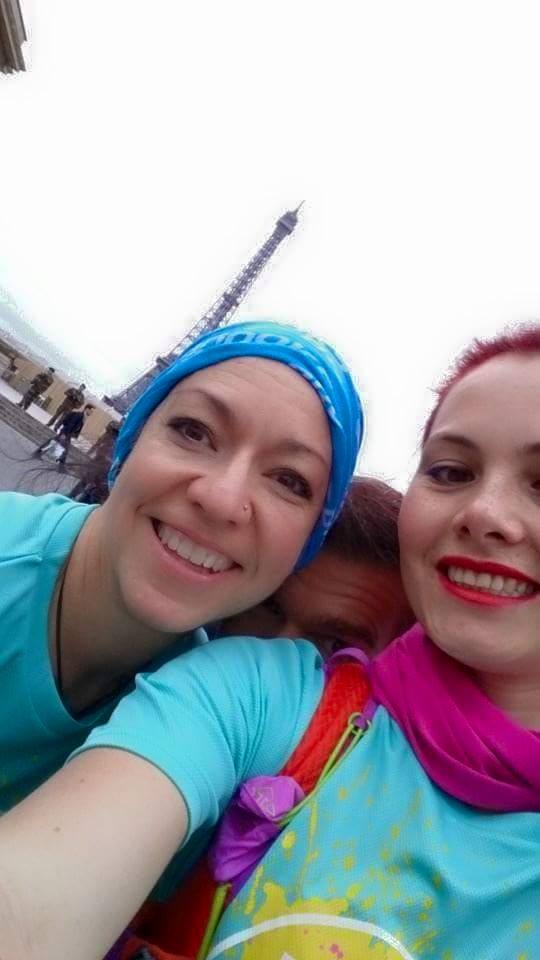 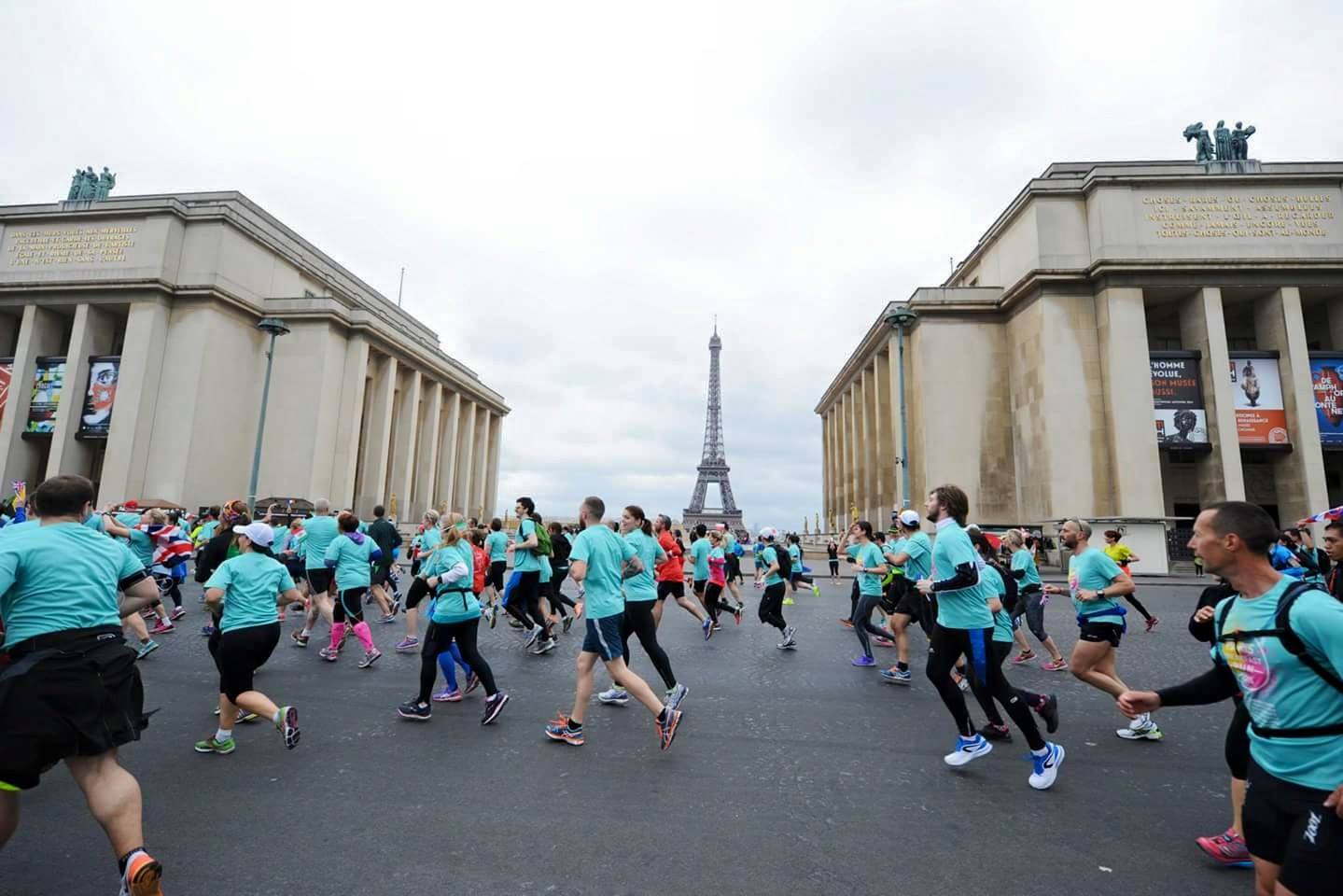 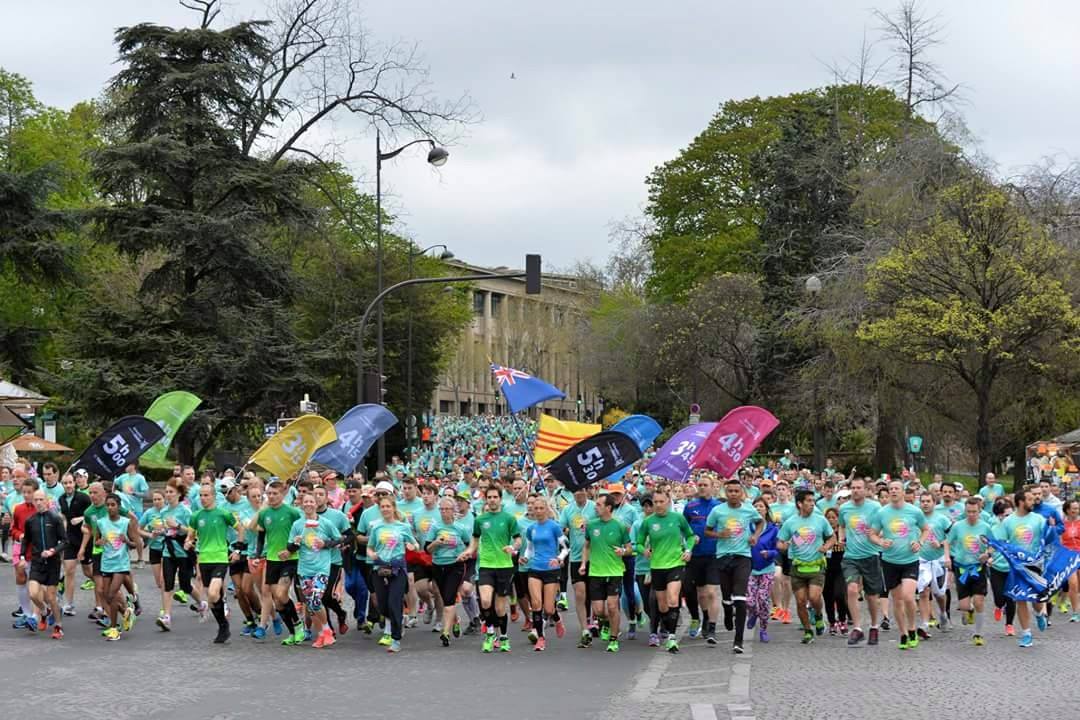 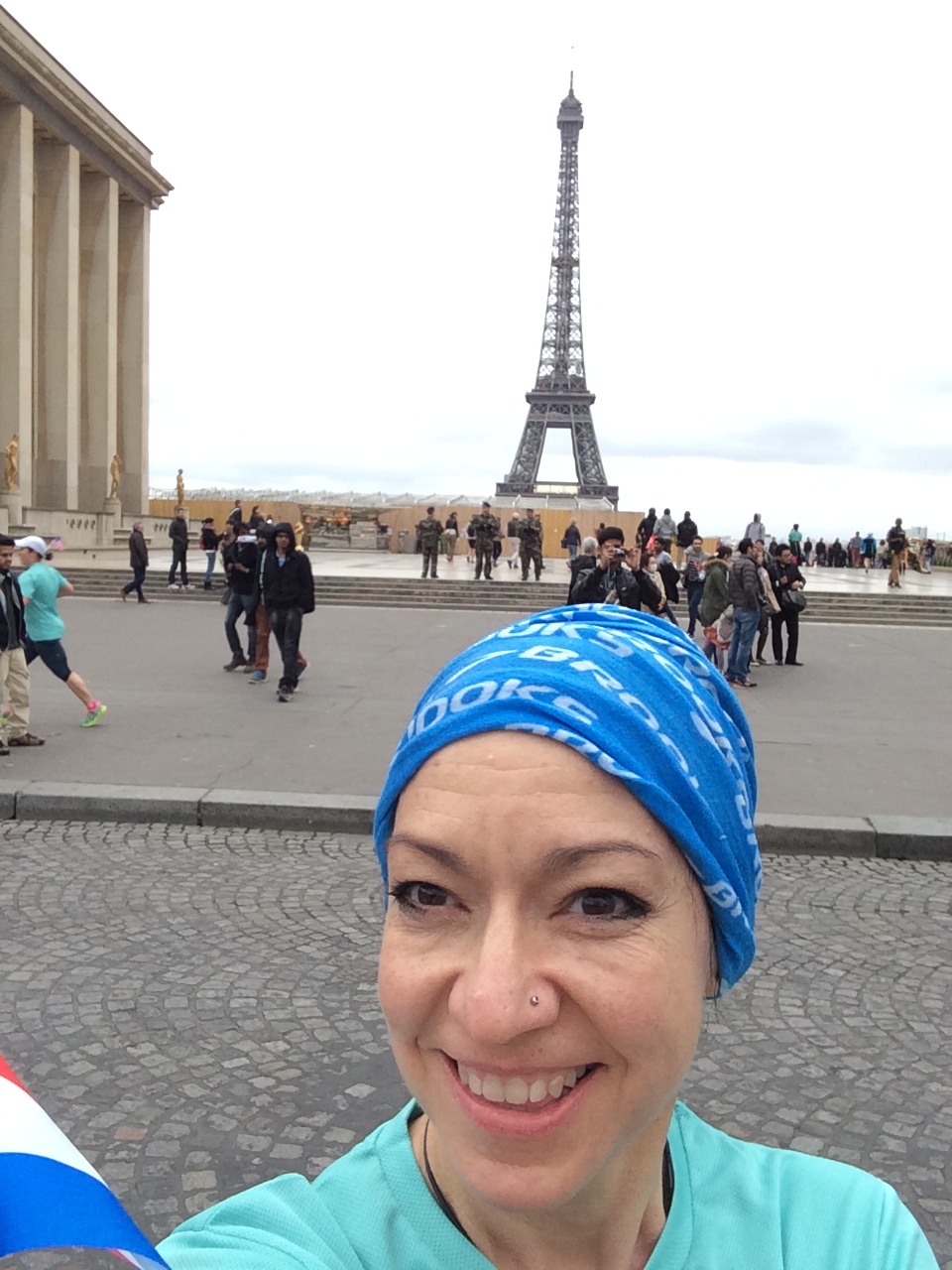 Also “ran into” Lois, Stephen and Andy from Running the World ! 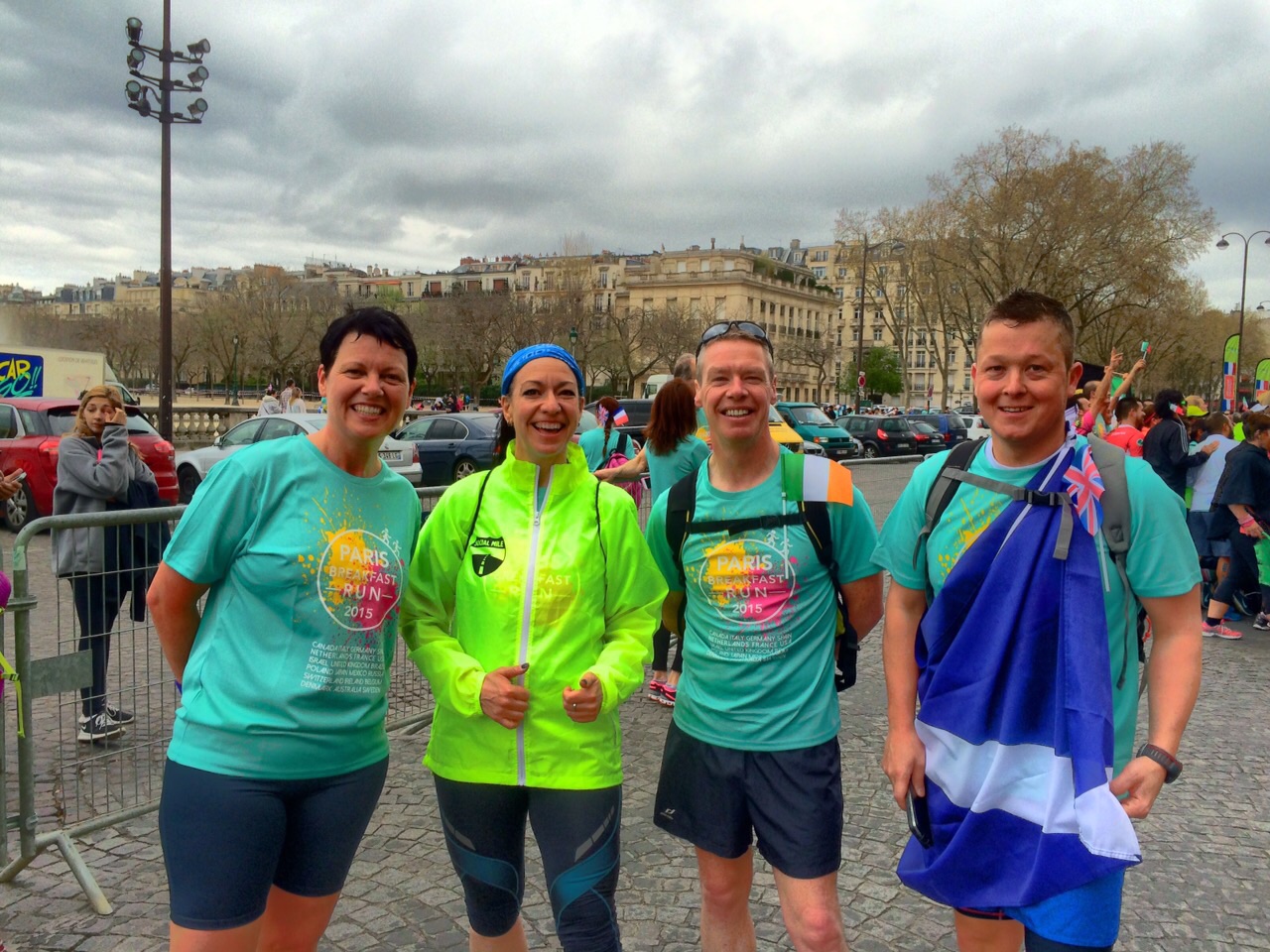 After the 5K, Mr and Mrs. Fox headed off to do their own thing, Mr. K and S, our other cheerleader were off sight-seeing, so C, Kim, Hubs and I went back to the Expo. We wanted to catch up with Scott Jurek again, like we had the opportunity to do in Berlin. 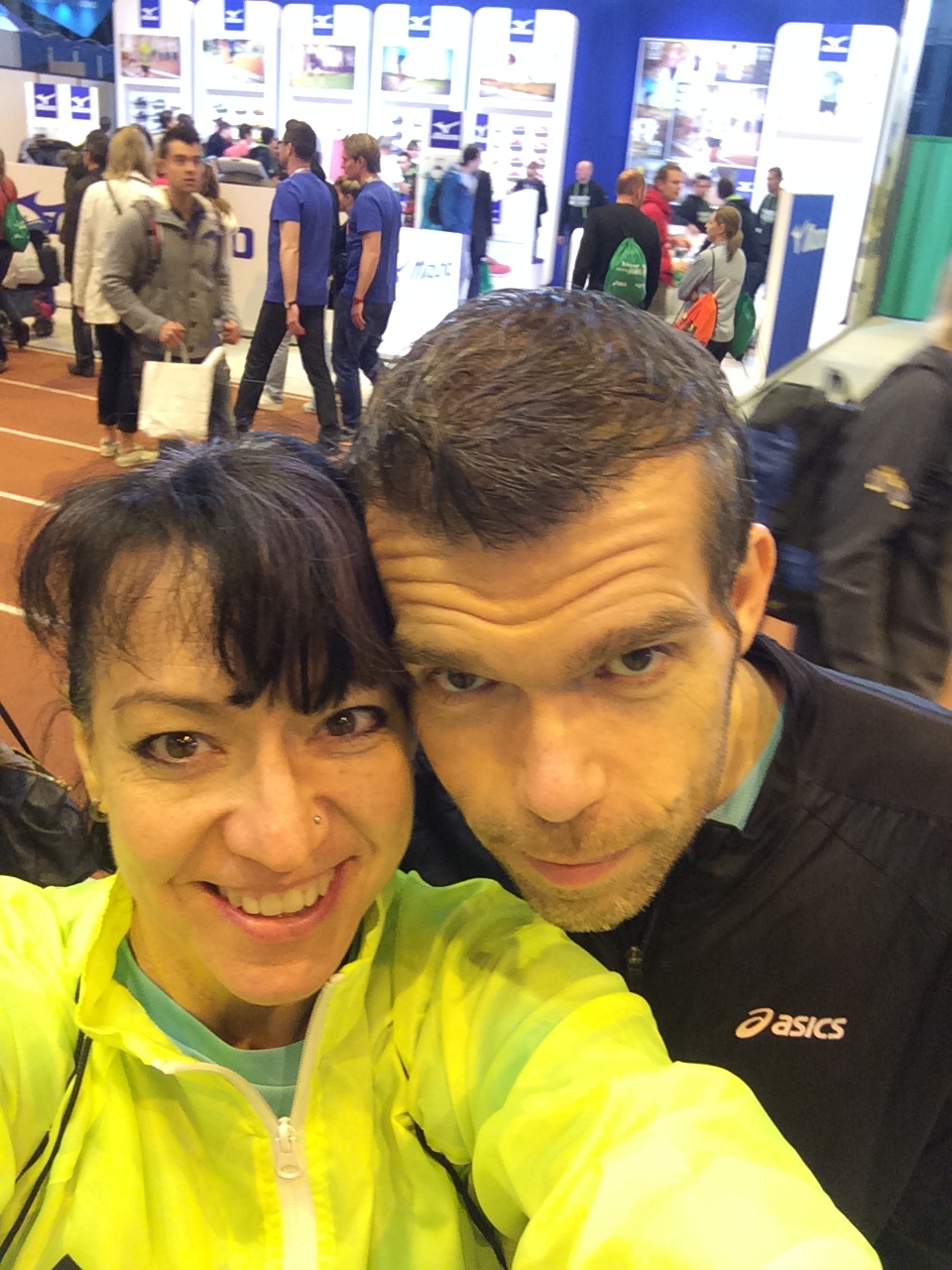 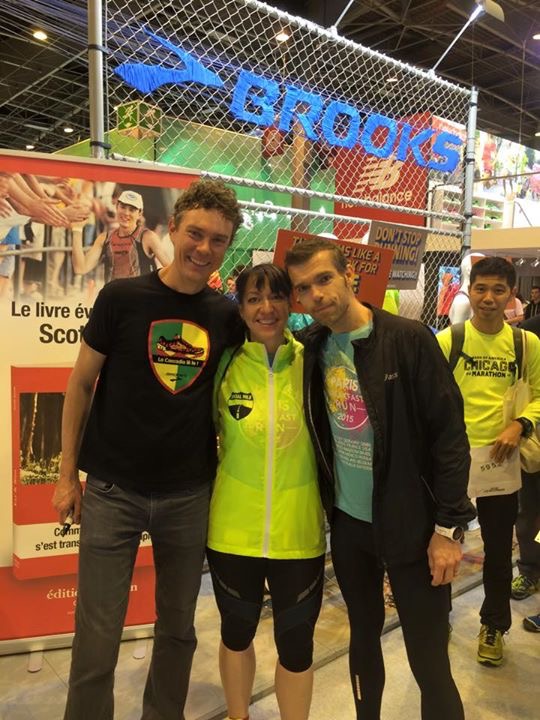 Hubs had noticed that the Garmin stand was selling the Garmin I wanted to buy at a much cheaper price, so we also ended up there where I handed over a huge chunk of change for a new watch. It had to be done.

After walking around quite a bit at the expo we then finally returned to the apartment. Hubs was the chef for this evening and he wanted to get started early on the pasta so we could eat early. While he was preparing dinner I was preparing my stuff for the next day, feeling quite nervous again but ready as I could be. We then had a very tasty pasta dinner as expected. Then, to distract myself I also got myself ready for a short but sweet meet up with a few other RTW’ers: 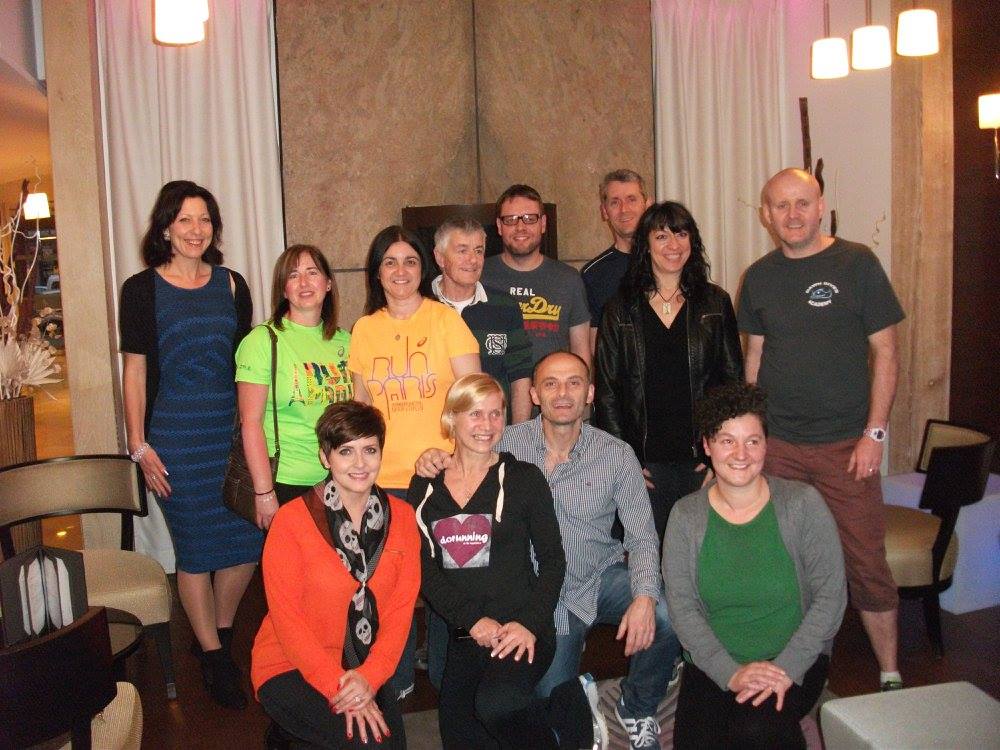 Then back at the apartment again and to bed. This was it!! Tomorrow I would become a MARATHONER!