So I think it’s fairly safe to say that training for Marathon Number Three was not optimal. I struggled sticking to the schedule and well there was summer holiday thrown in there and I was making excuses for drinking alcohol (something I gave up for Paris) and not sticking 100% to my diet. My last long run training was an absolute nightmare as well. However, the last few weeks of training and the last few races I ran (which were all training races) went really well and I was feeling strong, even as if I could DO THIS THING UNDER 5 Hours!

So as marathon weekend was upon us, the Hubs and I got our stuff packed, bought our groceries, threw everything in the car and drove the 2 hours to our destination. First stop, our airbnb apartment! Our hostess greeted us upon our exact, on-time arrival (I really have a thing about being on time so I loved that she was at the door right as we pulled up), showed us the ropes and then left us to our own devices. We immediately headed off to the expo. The tram was like a 2 minute walk from the apartment and 15 minutes ride to the city. Perfect!

The Expo was busy but not too bad. I guess we actually just made it on time. I’m more a fan of the pick-up-your-race-packet-early process and we didn’t arrive until about 2:30pm which, for me, is pushing it. We stood in a queue for quite some time and it wasn’t super clear how it was organised. The race organisation themselves would be printing the numbers on the spot this year for the first time, which I thought was a good idea environmentally and a bad idea logistically. We had to pick up the kit bag first and that’s what was causing the bottleneck. After that we were through the printing part quickly and smoothly. 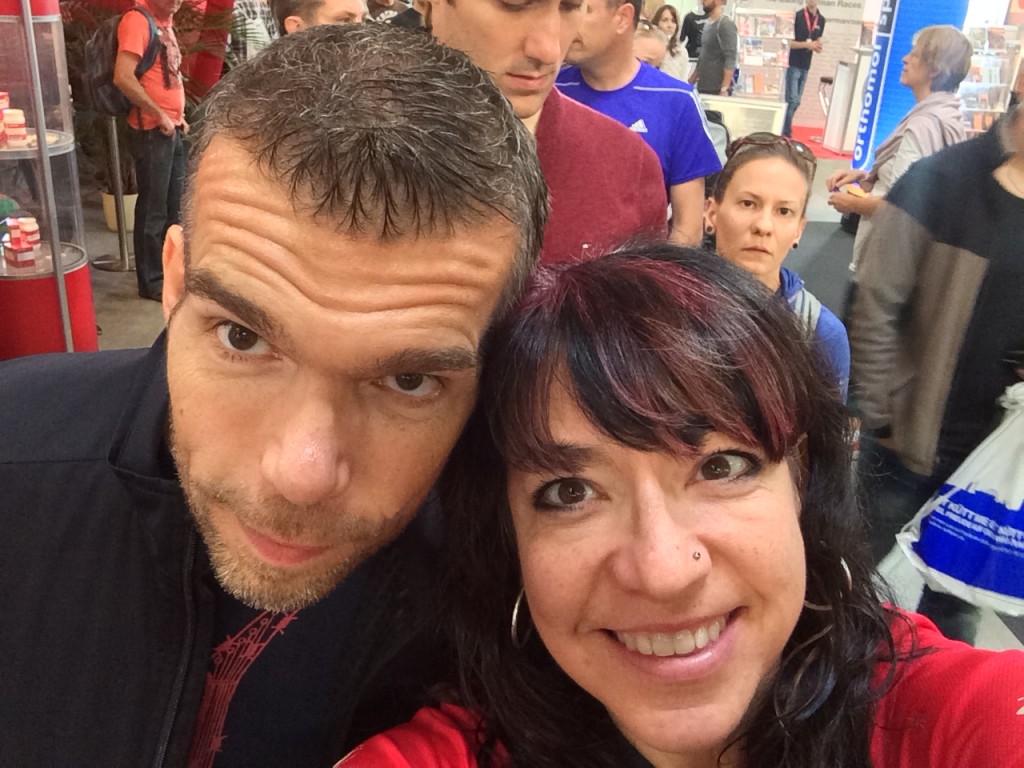 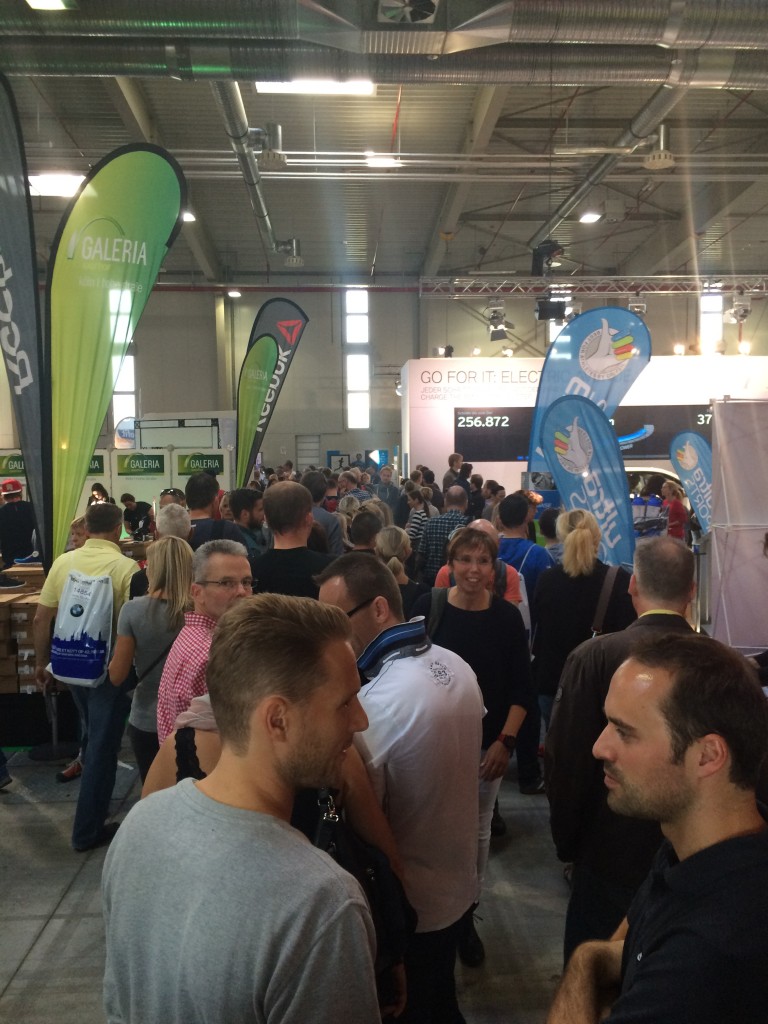 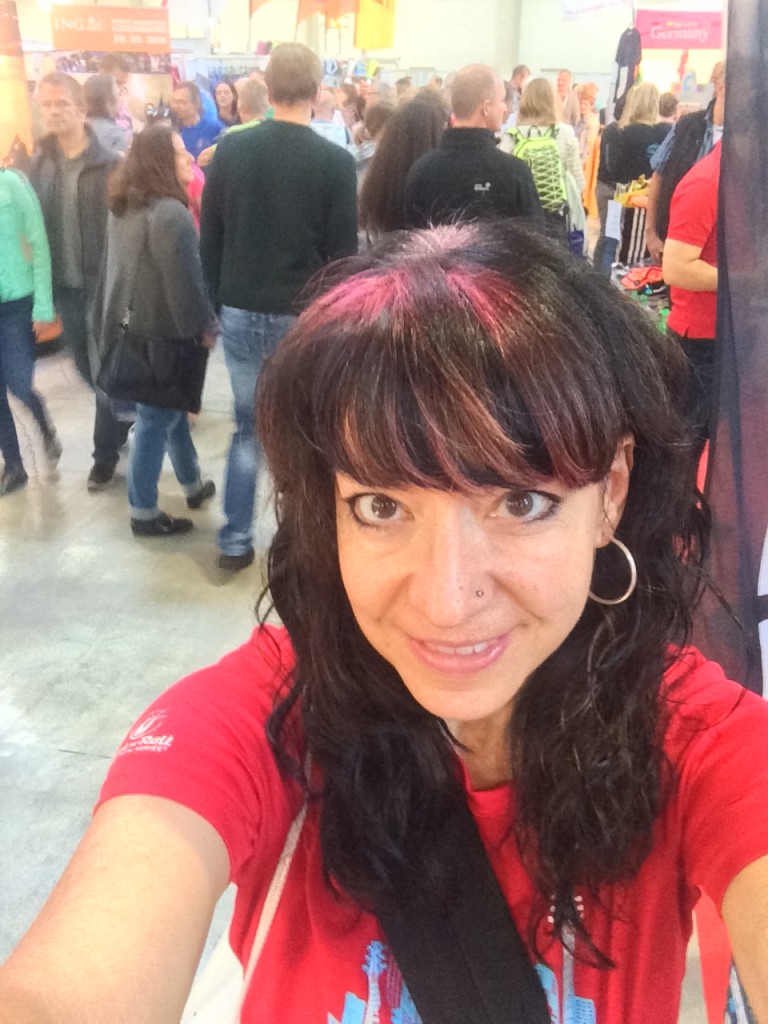 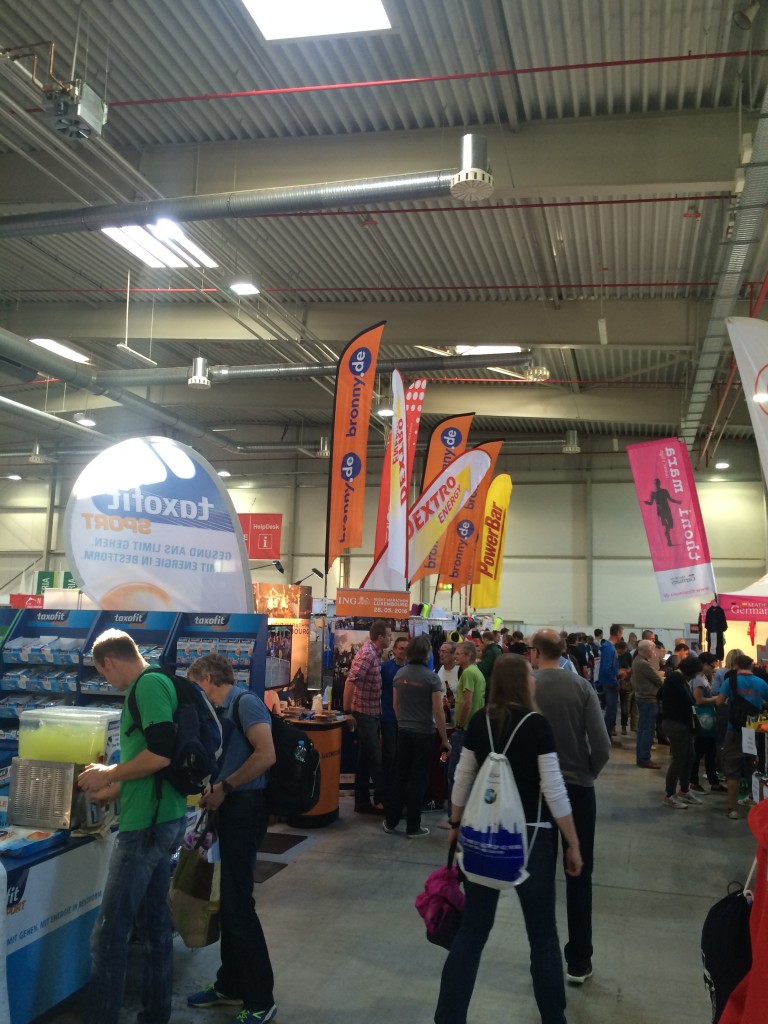 We spent a bit more time at the expo and the Hubs was worryingly looking at shoes. Because… he just doesn’t need more shoes right now! Ha! (“But I need racers!”) 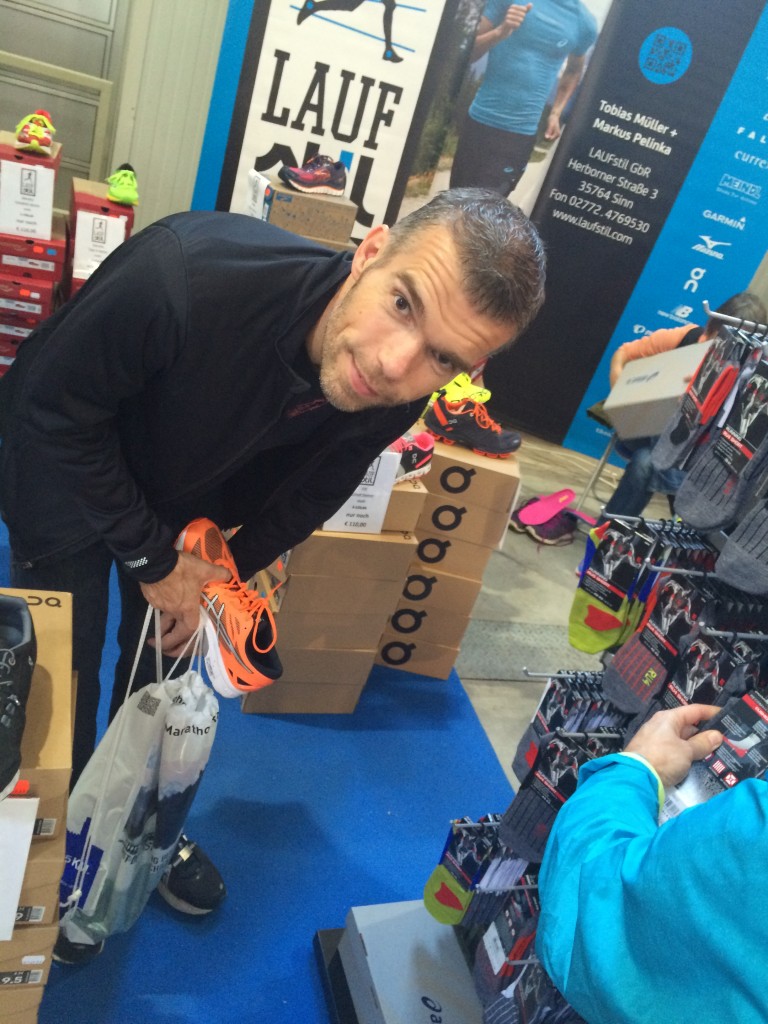 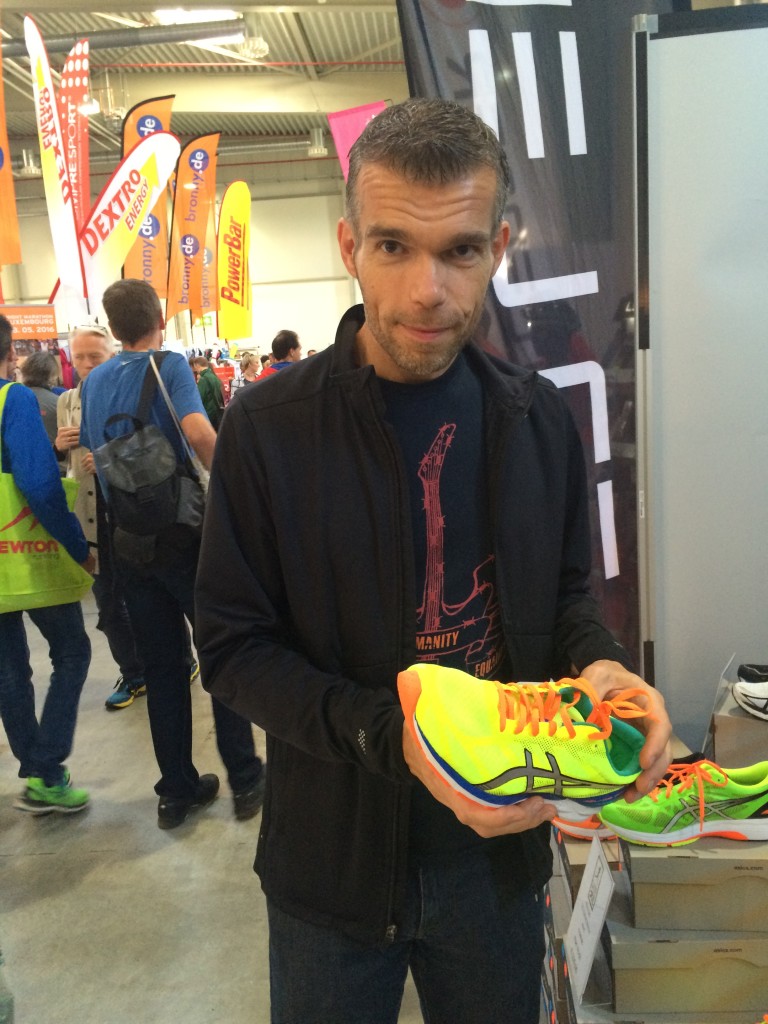 And then we also tried a few samples here and there and we bought some socks. As you do at the expo. Most importantly I wanted to try the sports drink (Dextro Energy) that would be at the drink posts since this was the first time I would not be using my (or rather the Hubs’) hydration pack. Luckily I really liked the taste of it so I knew I would be able to stomach it during the race (I have a pretty strong stomach anyway, but to be sure I don’t like to drink new stuff at a race).

Of course we did the obligatory I-Got-My-Bib shots: 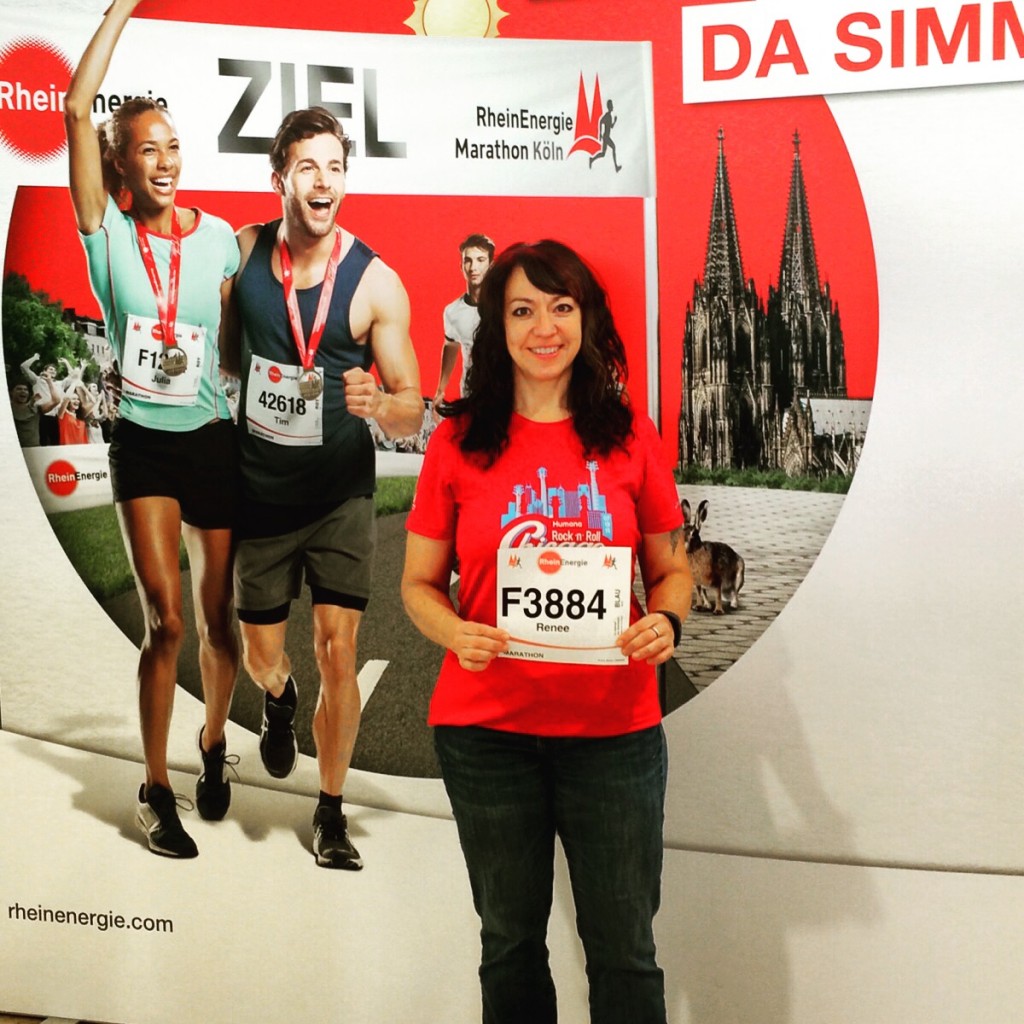 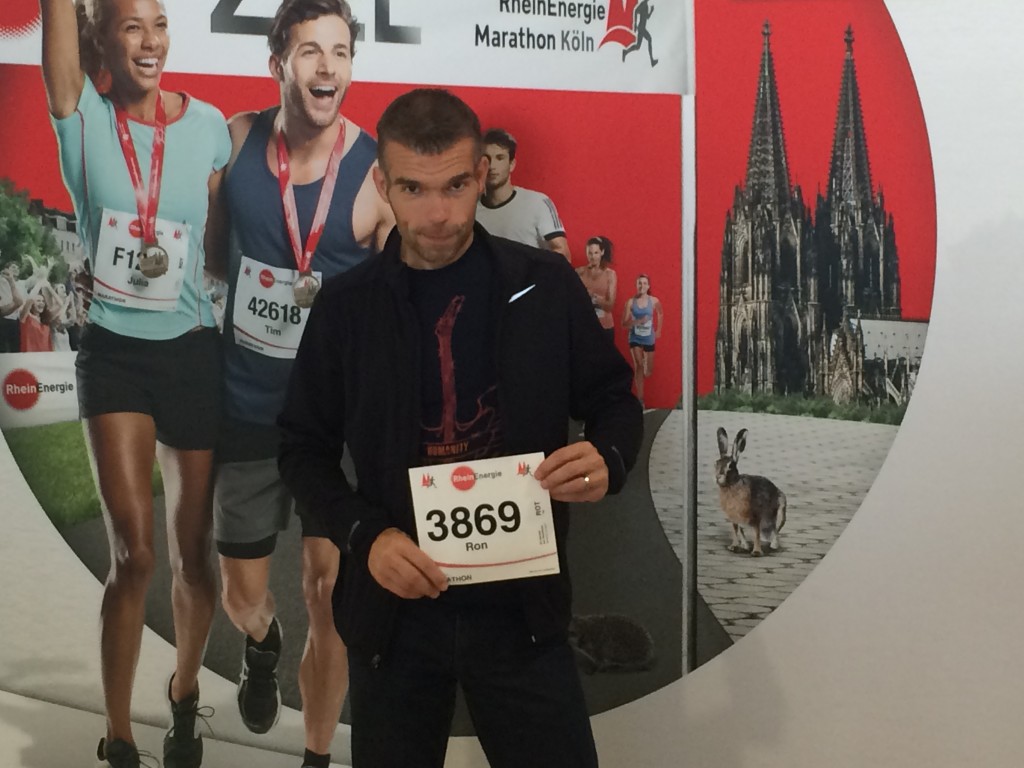 And then we were ready to head back to the apartment. 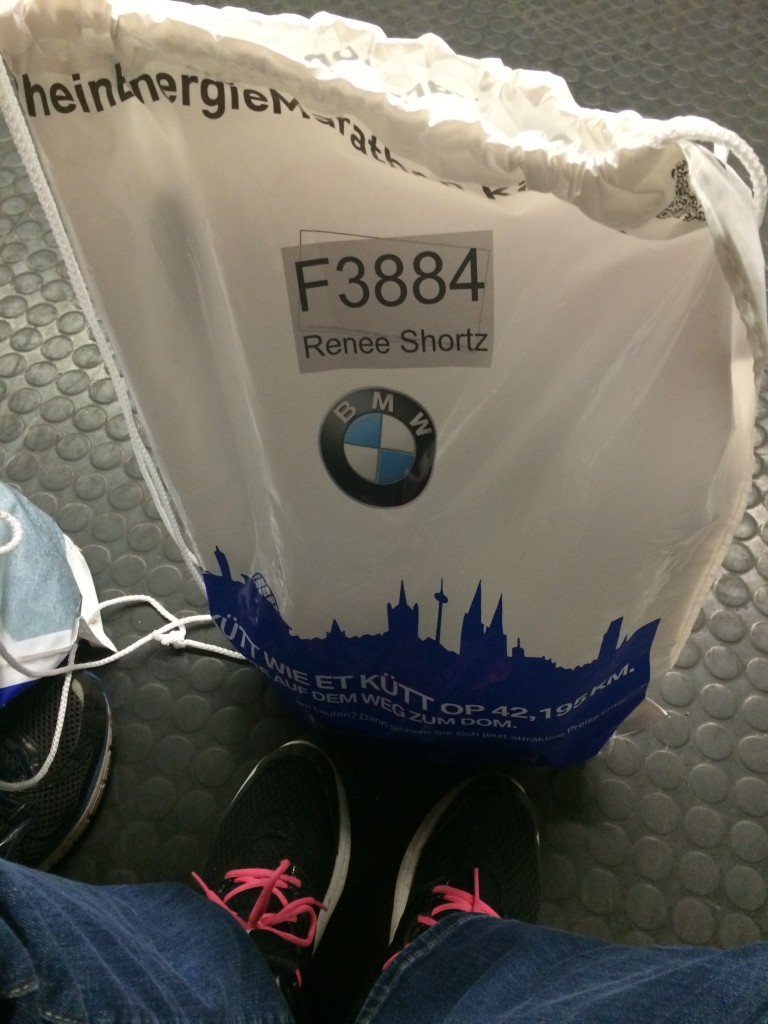 When we were finished we noticed that it was REALLY busy at the Expo. There was a queue all the way down the street! As we walked back to the metro we saw a lot of people dressed in traditional costumes. We found out later that it was German Unity Day and that’s why we were seeing a ton of lederhosen. I thought it was kind of funny/cute. 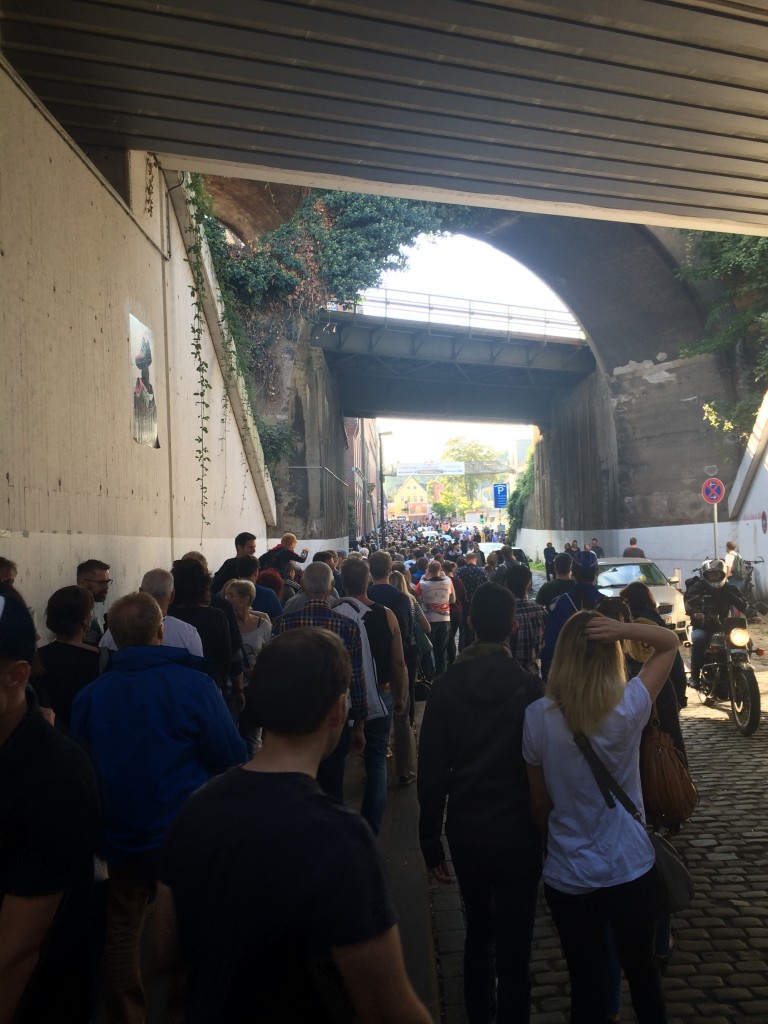 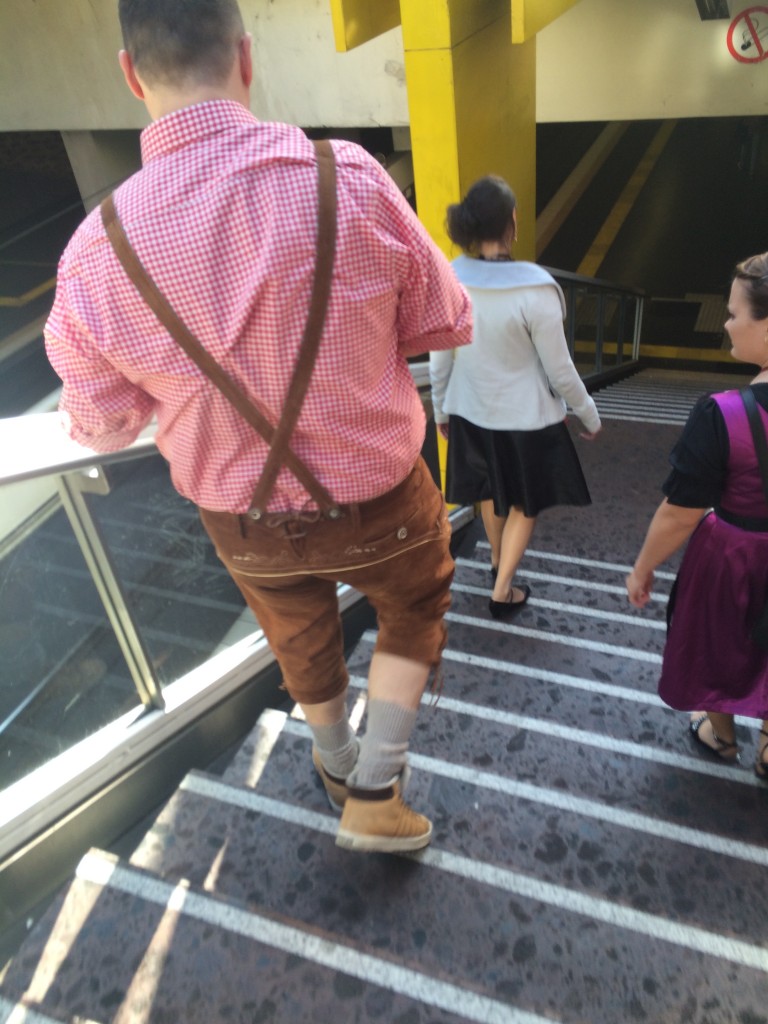 Here’s me in my relaxation pose, back at the apartment, while the Hubs prepared our carb feast: 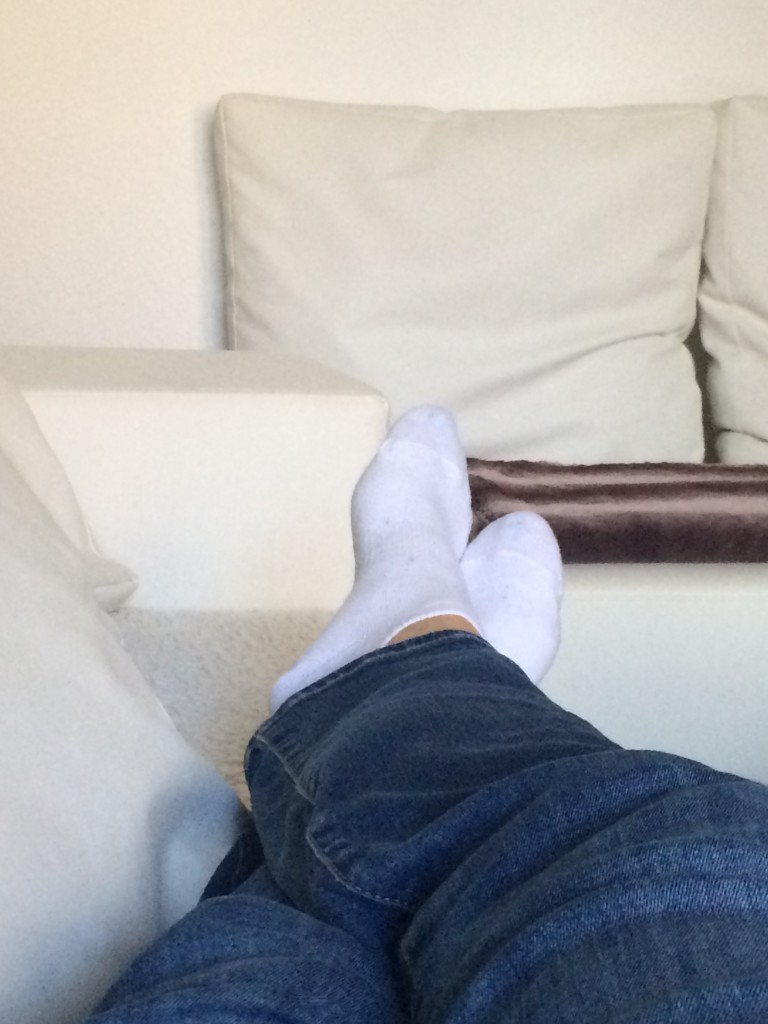 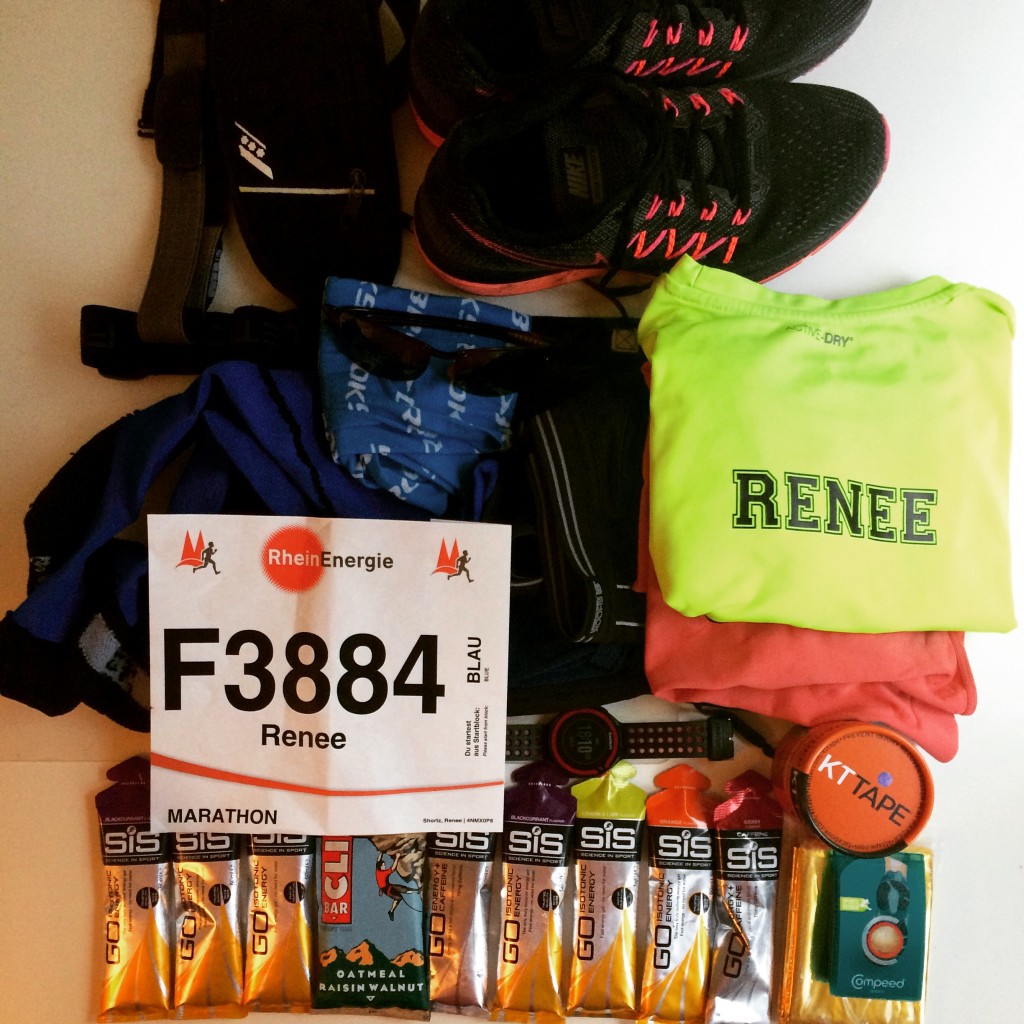 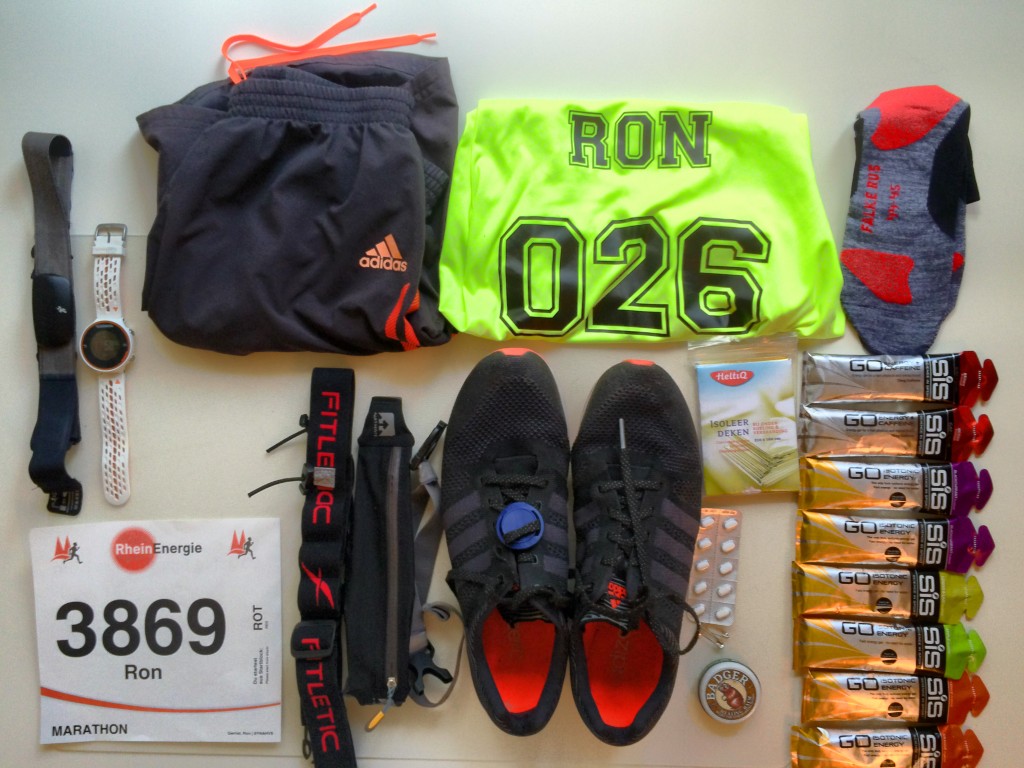 We had a good night’s sleep (at least this is a recurring theme!) and since most of our stuff was prepped the night before we didn’t really have to think a lot about what needed to happen. We had both been carb-loading a few days prior to the race with our beloved carbo loader from Etixx and race morning was no different. We had breakfast and were out the door in plenty of time to arrive at the start. In hindsight, I did not eat as much as I normally do, and this would absolutely kill me later. 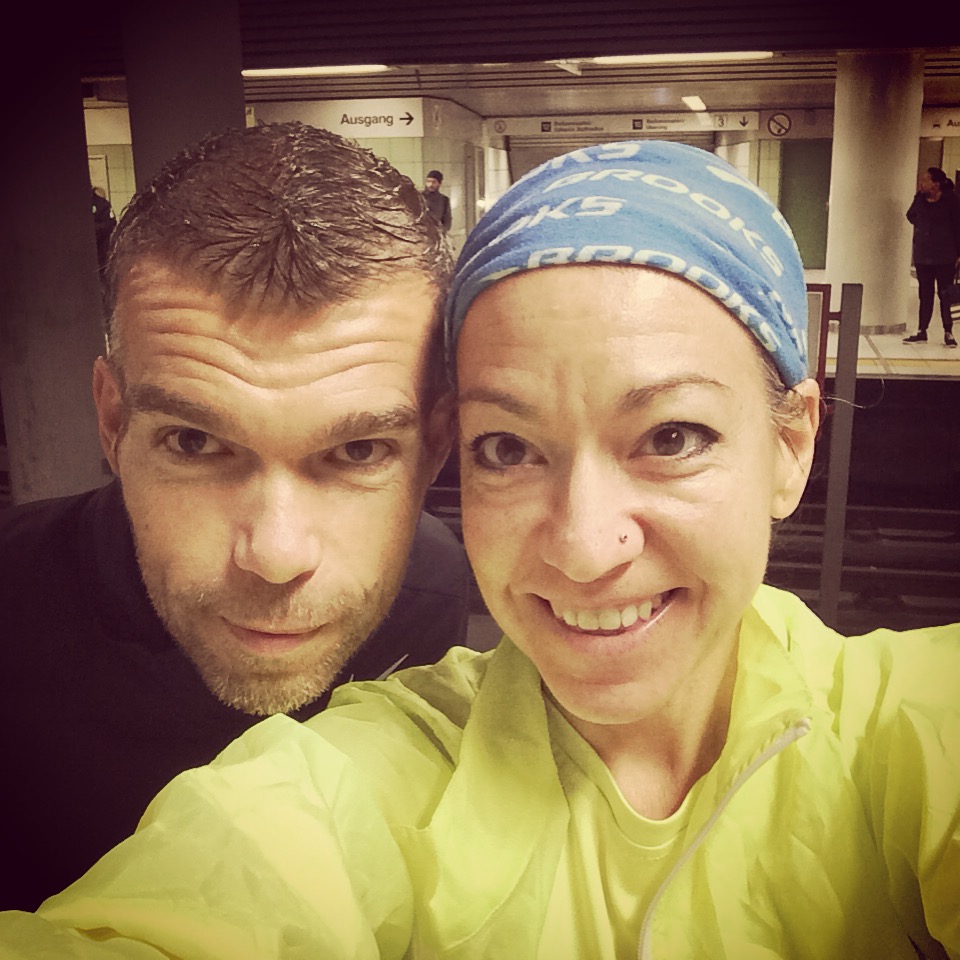 We weren’t 100% certain on where to go so we just kind of followed everyone else and eventually found the start, the loos and the kit bag drop-off. The Hubs was in the first starting wave and I was in the 4th so eventually we had to say good-bye and good-luck to each other. I decided to go to the loo one last time (I always go when I arrive at the start even if I don’t have to, because let’s face it, if you’ve had a half liter of carb-load drink or water, you are going to have to go!!) and then try to find my starting corral. Here’s where I was totally confused. It wasn’t clear at all and I ended up in a further back corral initially but finally found someone who spoke a little English and they helped me get to the right area.

The start was a bit rough, it was quite crowded and slow-going in the beginning. I wanted to try this marathon based on heart-rate using the MARCO calculator and actually, it went really well for about the first 17 kilometers (as I was trying to keep my HR under 150). My 10K time was 1:06 and my Half was 2:20. It was a tiny bit slower than desired but I still thought I would finally make it under 5 hours! After the Half though my heart rate was going up and my speed was going down! I could not understand it. I started to feel like I was running through molasses. Could this be what the Wall feels like, I wondered?

By kilometer 28 I knew I was in trouble. I was starting to feel delirious and HUNGRY. And if you feel hungry when running, it’s too late. I was taking in my gels but it wasn’t enough. Until then I hadn’t stopped except one time for about 20 seconds to drink some sports drink (water I’m fine with throwing half of it over my face, sticky sports drink, not), but right before 28 I had to walk. I had to eat something and it had to be soon. So I grabbed my clifbar from my back pocket of my shorts and did my best to choke it down. It was tough though because I was also feeling ill. I had to make sure that I got enough to drink at the next water post to really get that thing down my neck.

From 30 to 38 it was an absolute nightmare. I would try to run and it felt like I was moving backwards. I was hardly moving! My heart rate was way too high for this! So then I would walk a bit and then try to run again. It was finally after 38KM that I was feeling somewhat normal again. But I was so upset. I couldn’t even hold back my tears anymore. I failed once again. Stupid body. Why can’t I just run a marathon all the way through!? At 40KM I was 9 minutes away from the 5 hour mark. It was not going to happen today.

Finally I crossed the line, picked up my medal and made my way towards all the great stuff they have to eat. Too bad I felt like death on wheels. I really wanted to eat a bratwurst but I could only choke down a pretzel. I also drank a coke (I never drink soda but it was super tasty!). I managed to find the hubs and burst into tears. I was so disappointed (I still am, to be honest, am emotional writing this). After about 20 minutes or so I finally perked up a bit. I ran my 3rd marathon! Until this year I didn’t even know I could run 1 marathon let alone 3! 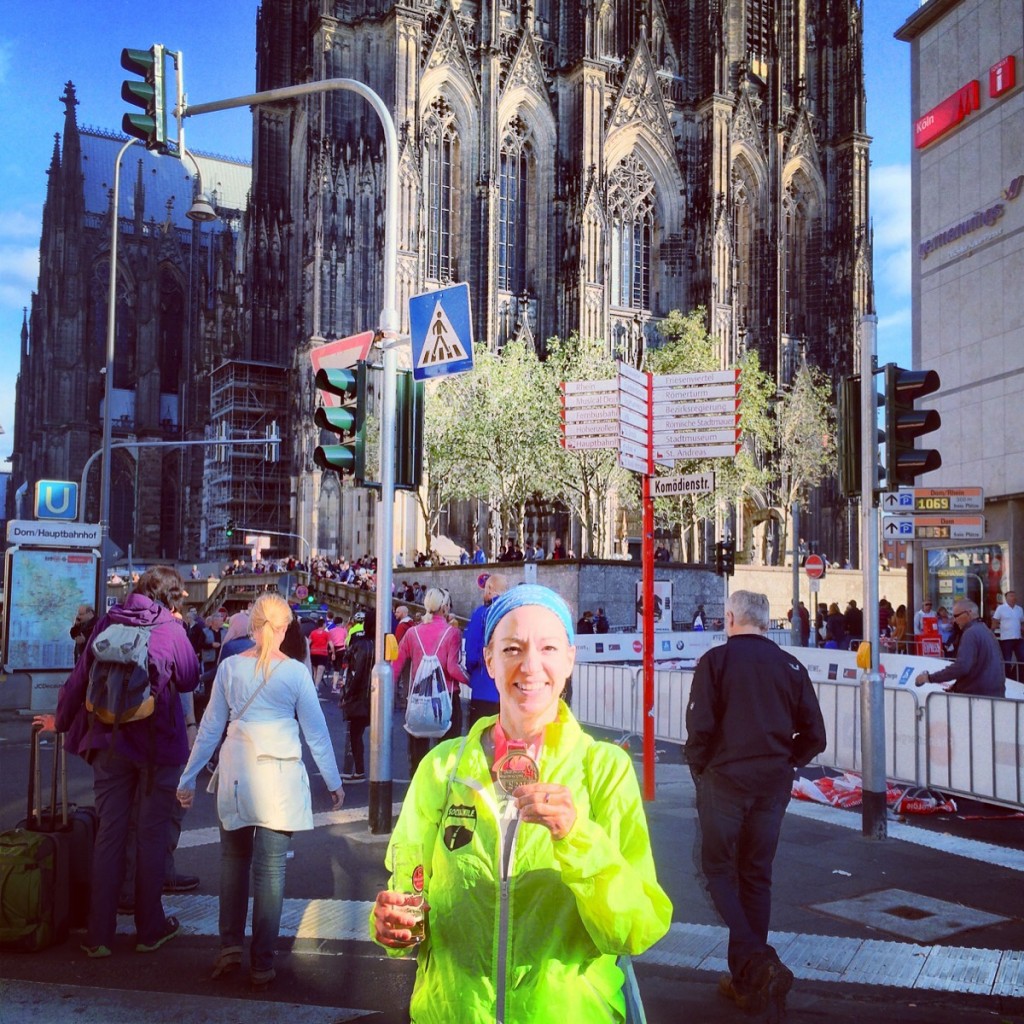 We had a quick beer in the center near the Dom and then because we were both kind of cold we stopped off in Starbucks to have a warm coffee before deciding what we wanted to eat. Then we found a “mexican” place (which wasn’t really Mexican, but my standards are high…) around dinner time where we could finally enjoy another well-deserved beer and some food. 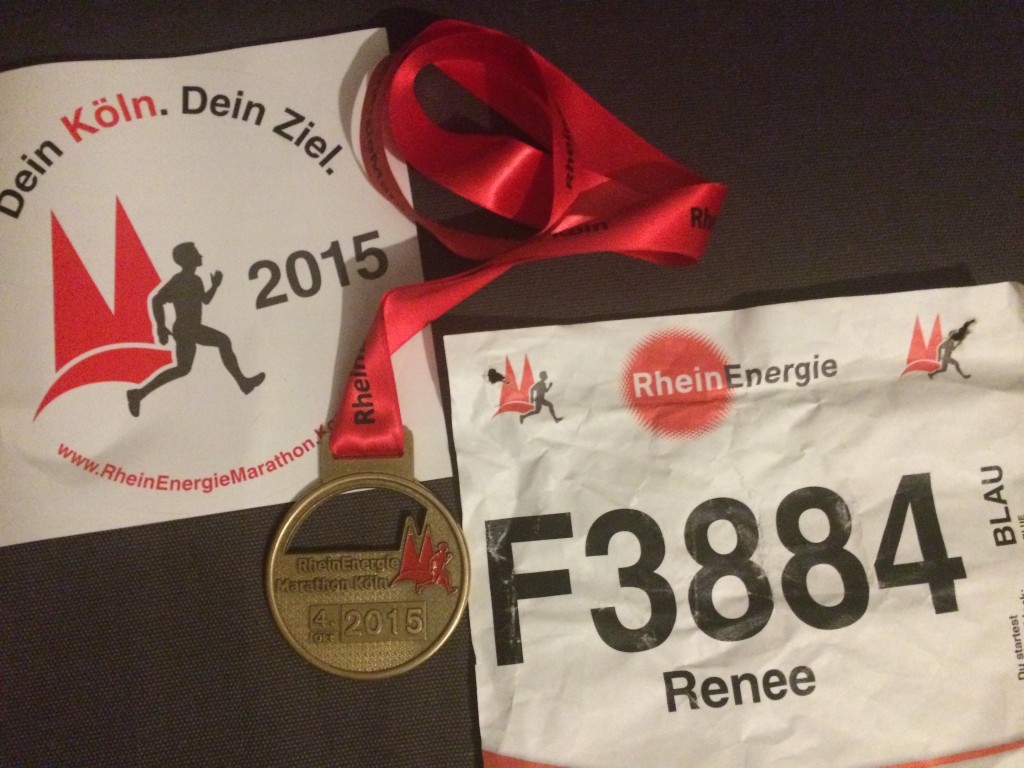 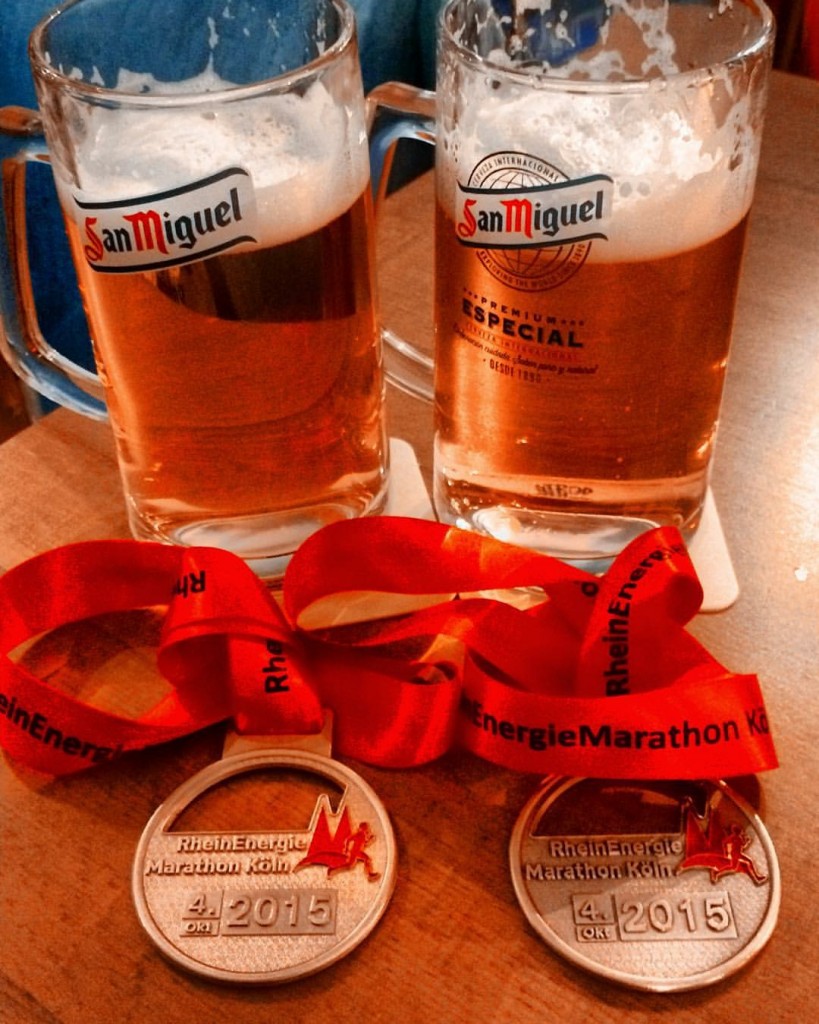 Eventually we made it back to the apartment, where we both had a nice long soak and a Tiger Balm rub down before hitting the sack. 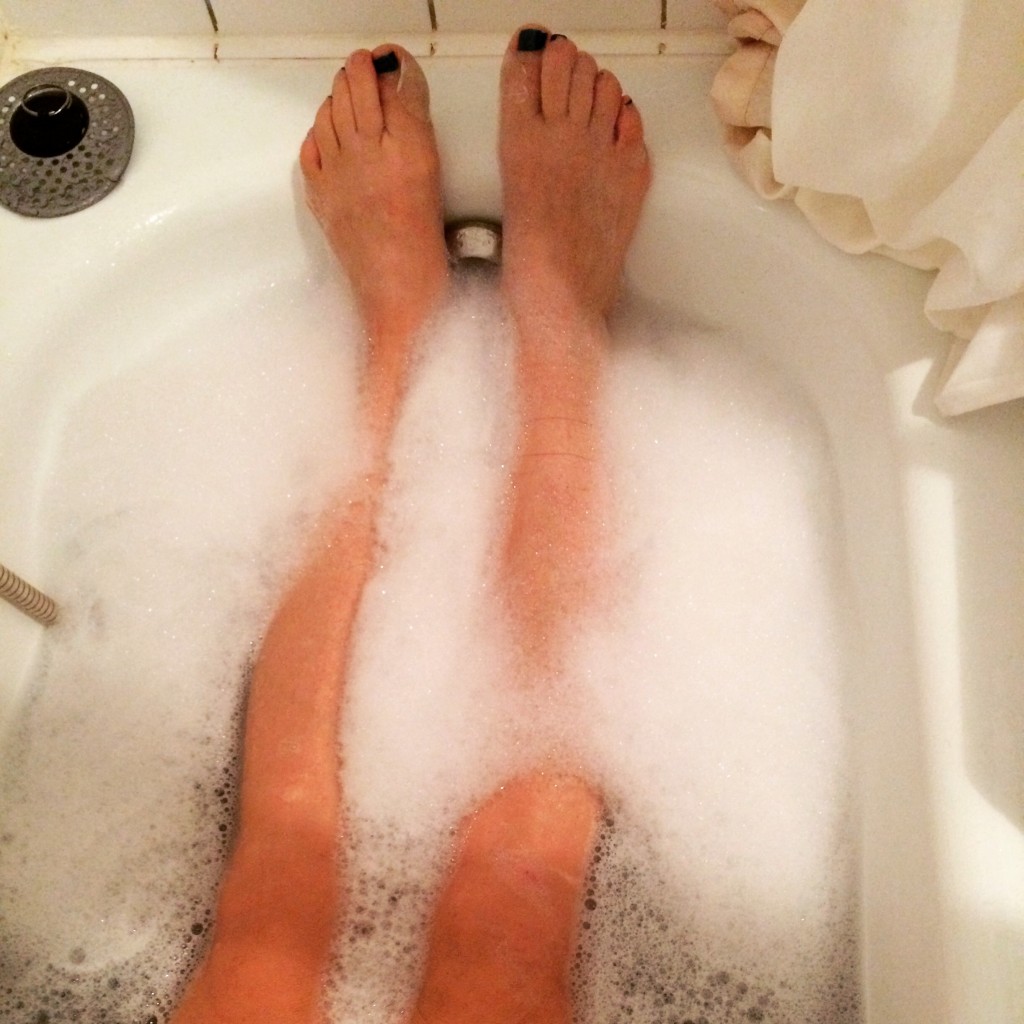 Monday, the day after. Ouch.

Since we had the day off we still wanted to take advantage in being in Germany’s Fourth Largest City before heading home. We had to check out by 11am so we slept in a bit, had a nice breakfast and then headed into town to try to gently but actively recover. We parked the car in a garage near the Hard Rock Cafe and stopped into Dunkin Donuts (we don’t have them in NL) so that we could somehow determine whether they were as good as Krispy Kreme (hahahaha!), we walked around a bit, got coffee, checked out the Lego store and then headed to the DOM for a little tour (of all the times I’ve been to Cologne, I’ve NEVER been in the Cathedral). 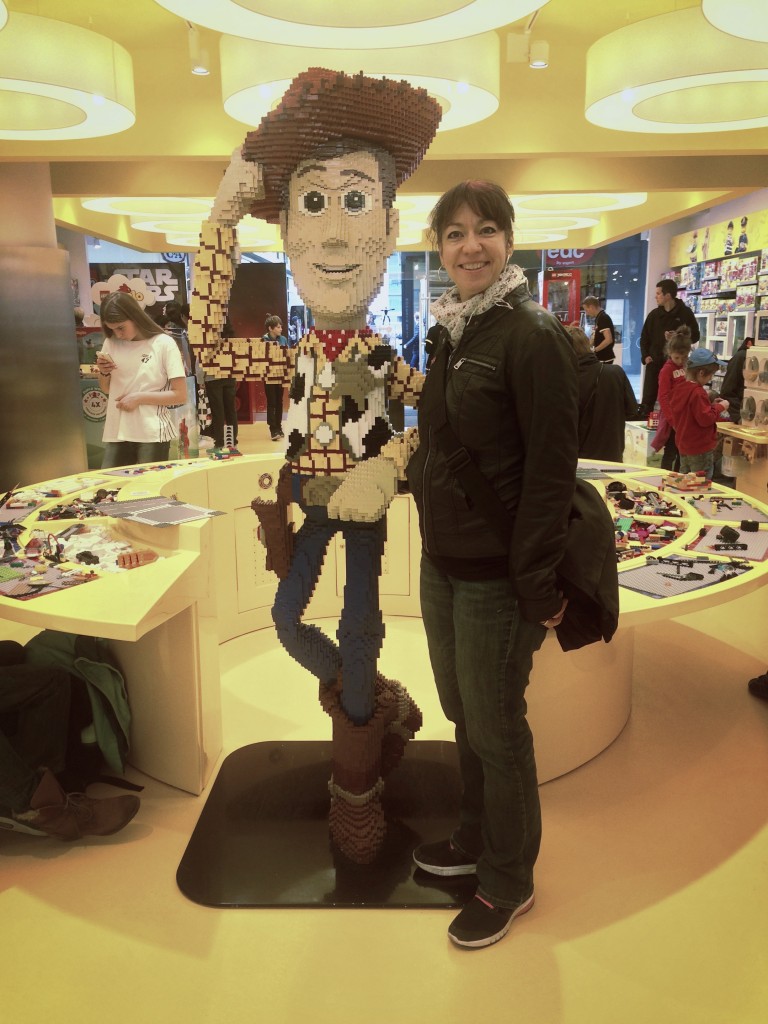 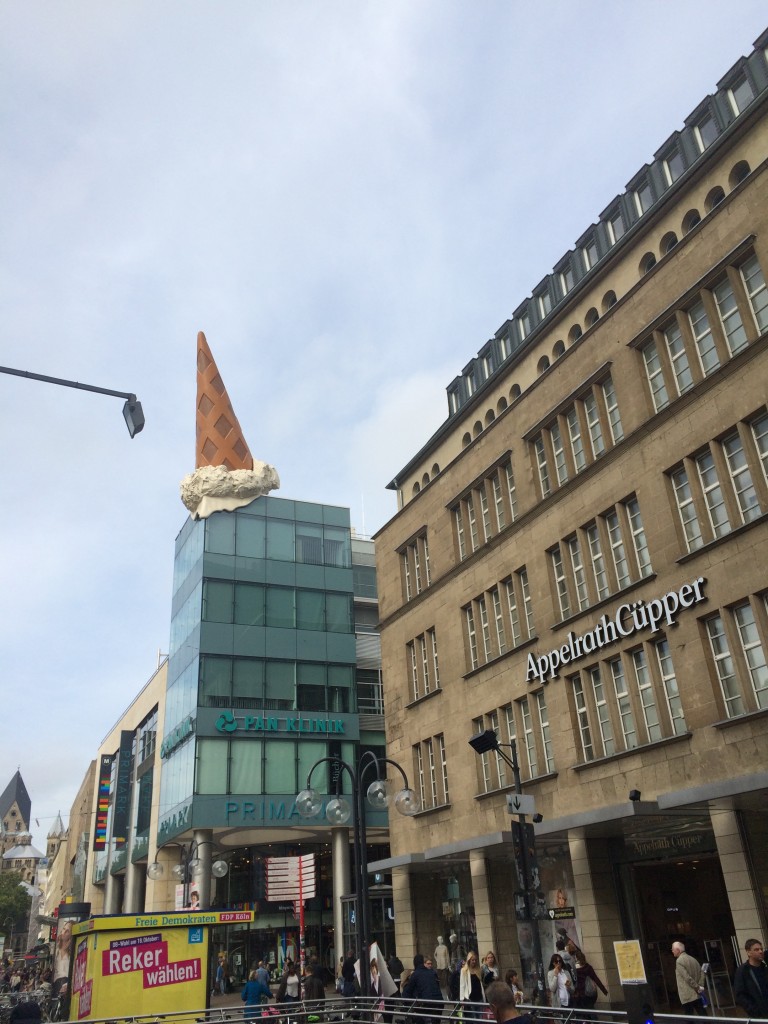 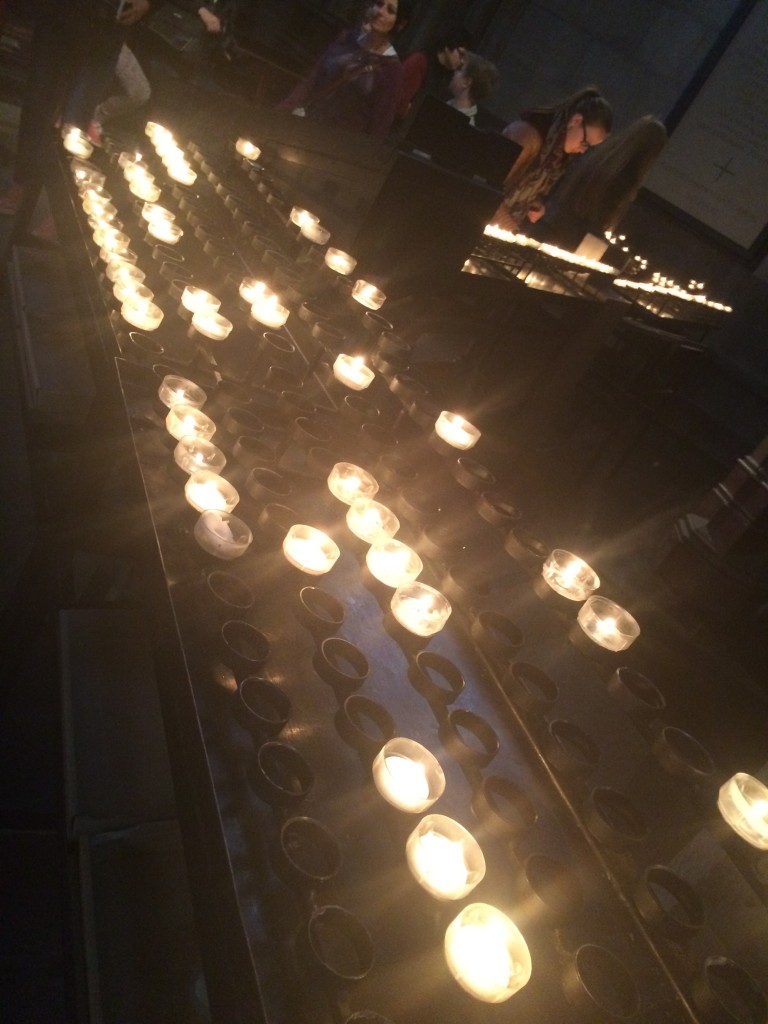 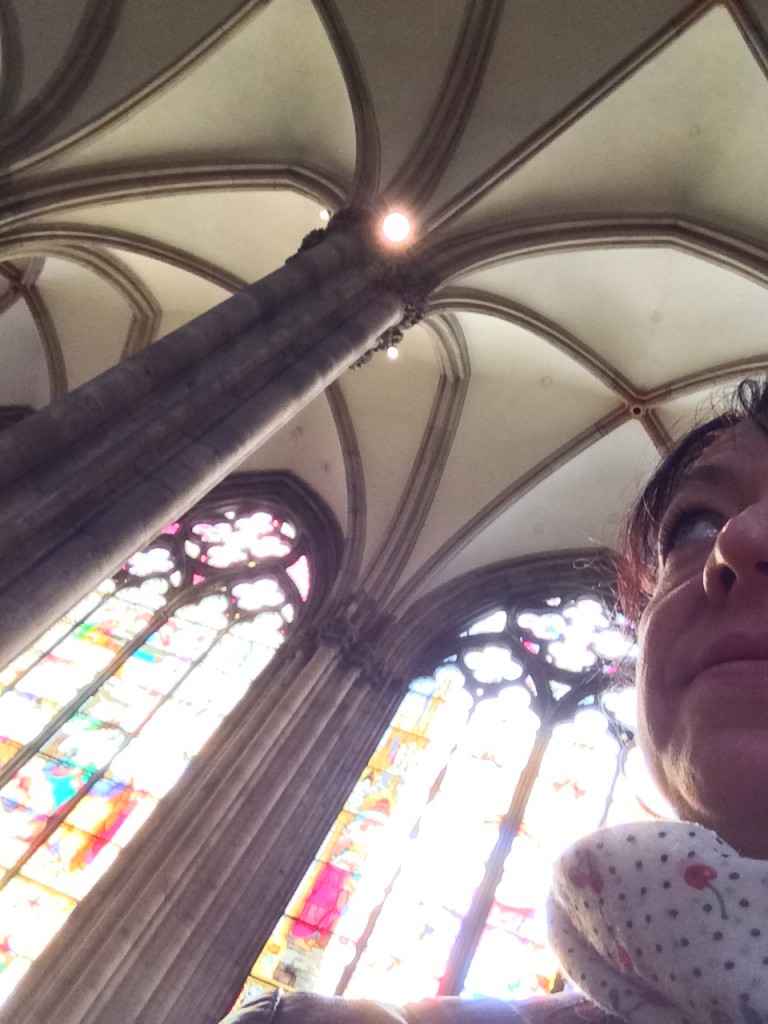 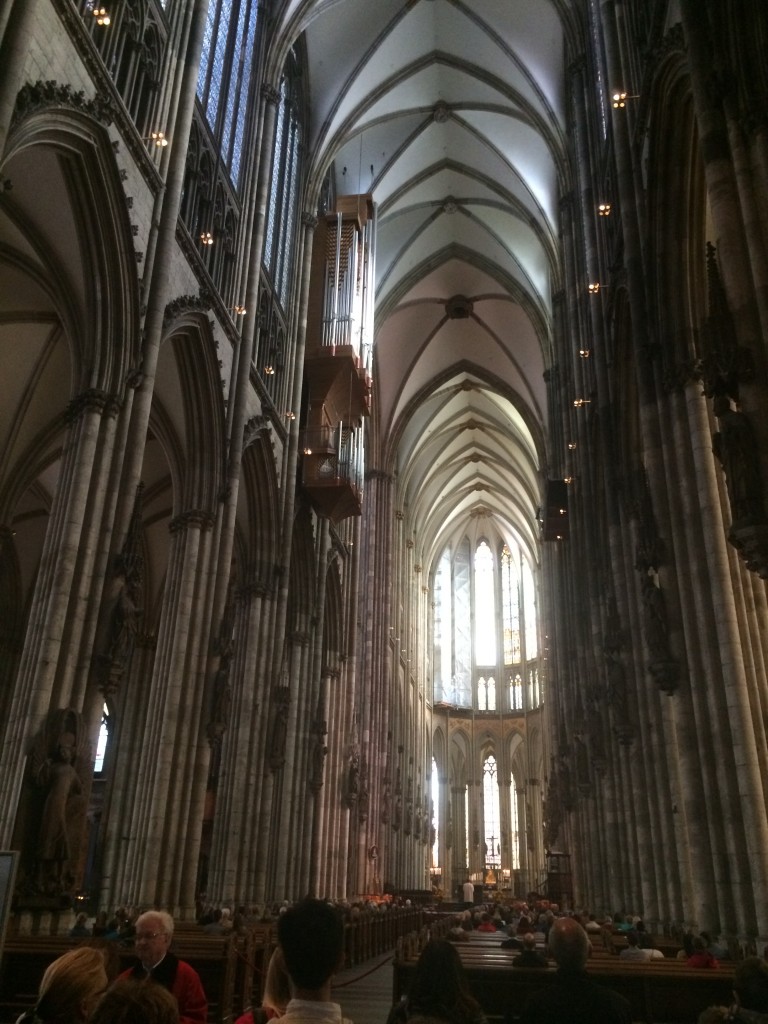 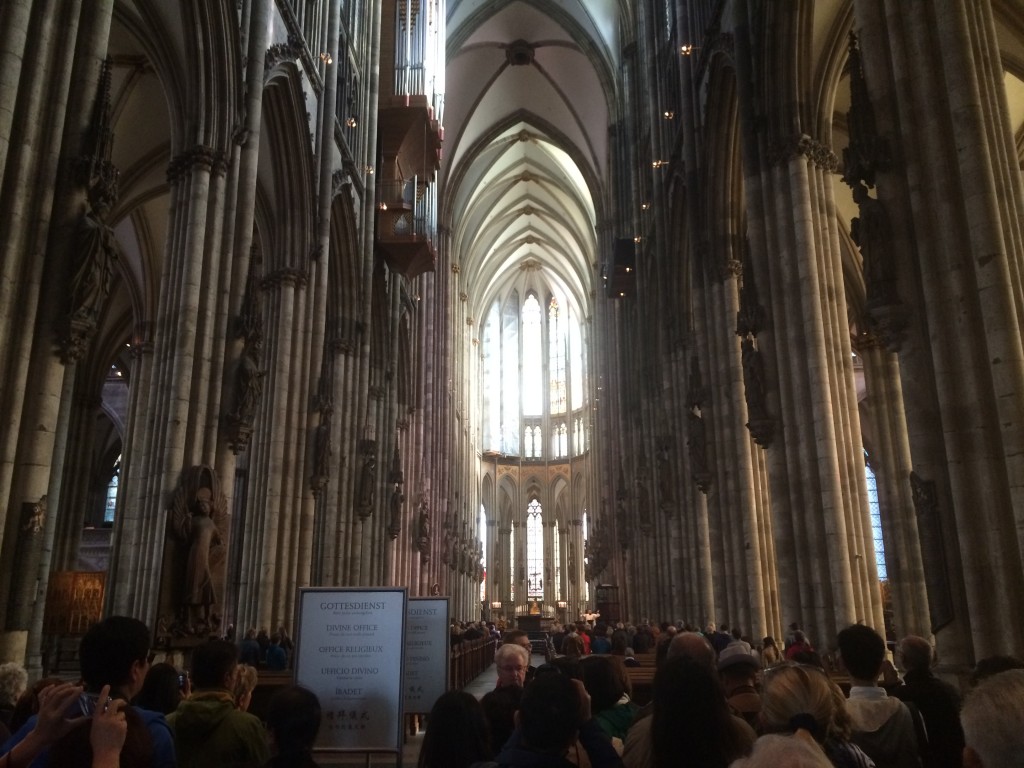 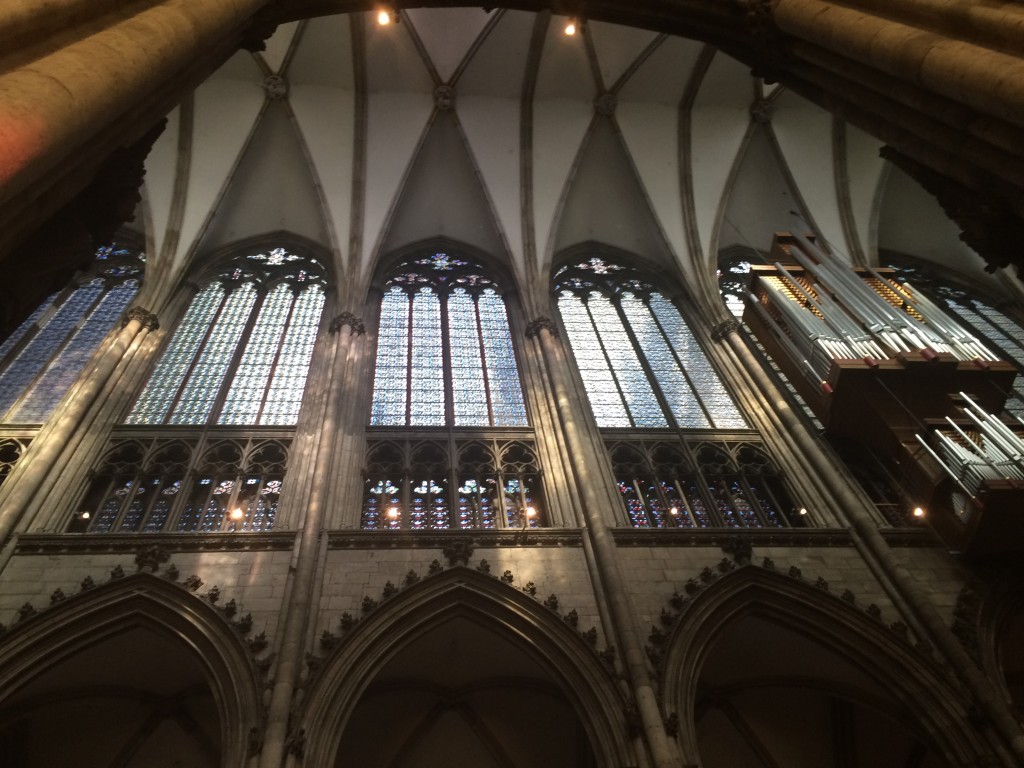 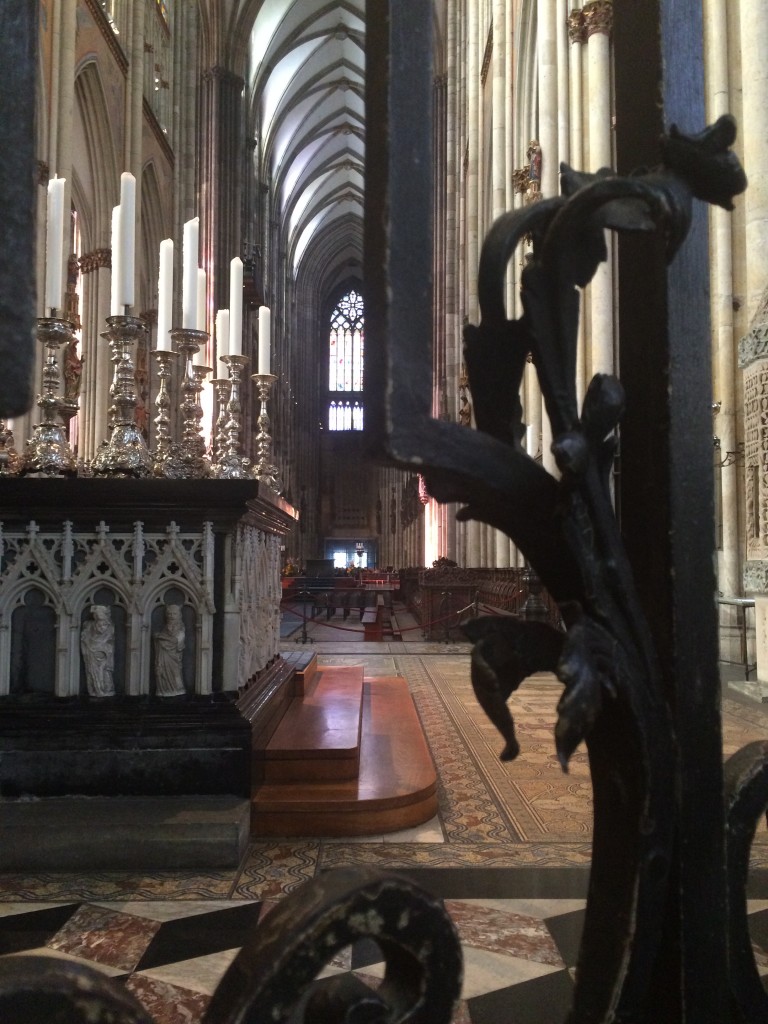 AND OF COURSE we had to go to the Hard Rock Cafe for lunch!! It’s tradition! 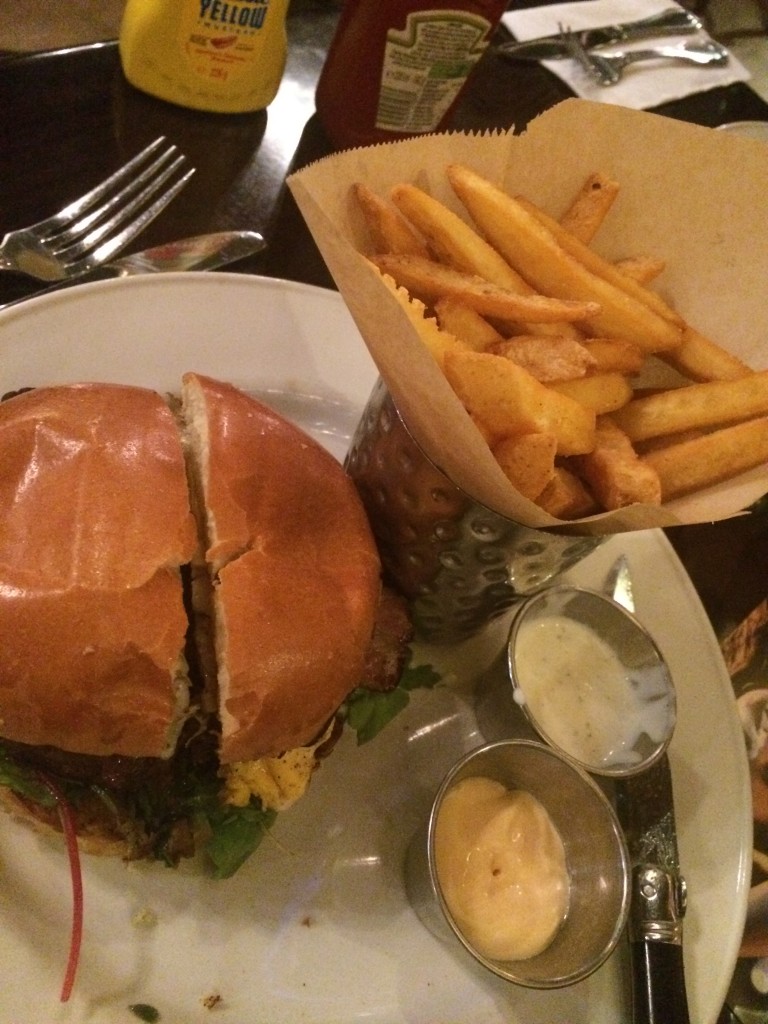 Finally it was time to go home. It was a good weekend and I still learned something from the experience. The race course itself was really nice, though there were some spots that were hard on the feet and it was NOT flat like everyone says! It’s a great city and in general it was very well organised. We had some confusion because we aren’t German speakers and I think if the organisation really wants to appeal to international runners (because this could be a good replacement if one doesn’t get into Berlin) they should accommodate just a little bit more to other languages or at least English. The finish line food set up was AMAZING, I’ve never seen anything like it and you could just fill up a tray full of food – fruit, sausages, donuts, pretzels, yoghurt, energy bars, etc – and take all you wanted.

Have you ever done a race where it completely went wrong about halfway through? Have you run any race where you felt like you were going to be ill or you hit a “wall” and it took you a while to feel better again? Have you finish a race and cried because you were upset and NOT because you did something amazing?