The lovely River has bestowed upon me the 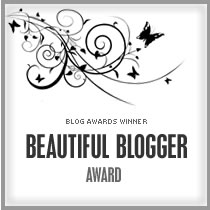 So sweet considering I happen to think she is quite beautiful herself.

Of course with any award there are rules:  As I pass this on to 7 other beautiful bloggers I have to tell you 7 things about myself:

1) My favourite smell in the whole wide world is the smell of the rain hitting the dry New Mexico desert. There is *nothing* better. Really. If someone could bottle it and send it to me, I would be very grateful.

2) Because of my eye “issues” I am cross-eyed fairly often – mostly when I’m tired, stressed or, ahem, under the influence of alcohol. I used to be very sensitive about it when people would say something or make a joke, but now I don’t really care.

3) When I was 10 I saw a movie filmed in Paris in the 1950’s and I decided I would learn French and live in Paris when I was all grown up (my reality was Dutch and the Netherlands; close enough).

4) I shop-lifted once. I stole a calligraphy pen from a stationery shop in Las Cruces, NM. I felt so guilty I took the pen back after about an hour.

5) I played the violin in school (starting from age 10) and did so the first two years by ear only (I could not read music).

6) I am obsessed by my eyebrows. I am constantly plucking them. I was told at my makeover in February that my eyebrows were a little thin. Yes, I am *that* older lady who is now filling in her eyebrows.

and to the lovelies I would like to give this award further to: