Because we all need a recap, right?

OMG you guys, what a week.

Monday was my birthday, but I swear I did nothing but eat treats all day, come home, eat a yummy dinner and more treats and then drank wine and had face-time with my dad and stepmom. It was a GREAT day, but Tuesday I had the worst food hangover. Seriously.

Tuesday, even though I was exhausted, the hubs and I were attempting to do a 10K, since we had a 10K coming up. We basically did the run I did last Sunday. It was really good considering how tired I was – I had two fast KM’s of 5:53 and 5:57. Keep in mind that I consider my average pace to be around 6:30 per KM.

Wednesday I was able to work from home and actually I got quite a bit done not only work-wise, but at home. I also took the opportunity to make a double lunch, extra stuff at dinner and fully prepped my food for the next day. I really love it when I don’t have to get up before 5am just to make food – I do it because I have to do it, but when I have time to prep the day before? AWESOMENESS.

Thursday another stressful day at work and my running partner was so tired that she wanted to skip our run after work. Fine with me; I knew hubs was going to have a little spin on his new shoes (took back the new ones and had to get a smaller pair) so we ran again at Sonsbeek, and actually things were going really well for me until BAM! I fell at around 2.3KM. I’m fine and nothing is badly damaged but I was kind of annoyed because my pace was pretty good. Have a little bruise on my hand, arm and knee, otherwise totally fine. Hubs was right behind me when it happened, so he helped me up, I walked it off and we continued. Luckily I have had zero muscle ache from this fall, so obviously then it wasn’t that bad (not like the time I crashed and burned in my dad’s neighbourhood in March 2011).

Friday! Rough day at work (again. what’s new?), but I left “early” to go and pick up my friend Maria who I know from school (yes that long ago). She lives in London but comes here every year for a big conference. We’ve been seeing each other again since around 2008; a few times in London, a few times here – we always end up going for Mexican food so this year was no different, except for the fact that another friend of mine was in the country as well so I invited them both to my birthday dinner (with of course my lovely M and my hubs). Good fun (bad food but there’s not much we can do about that), few drinks, home just before midnight like good old people do (I’m old now you guys!).

Saturday I got up early with Maria to take her to the train station. Then I did my few errands and went downtown to pick up my race pack for the Bridge to Bridge the next day. I met up with Patrycja, my friend from the Meetup club who was doing her first 3EM (almost 5K) and she asked me advise on all kinds of things and we talked about running in general and losing weight and other stuff (since we are both “foreigners” in Arnhem and the Netherlands we talked about that too). THEN, I saw someone that looked familiar and heard “Pinky??” – it was Joanna! Joanna came to pick up her and her running mates packets as well, to eliminate the stress of picking them up the next day. We almost met each other at the Hilversum Spieren voor Spieren Run and the Rotterdam Ladies Run. This time it all worked out even before the race. Joanna ran the 10EM and I was doing the 6EM so we wouldn’t see each other race day. 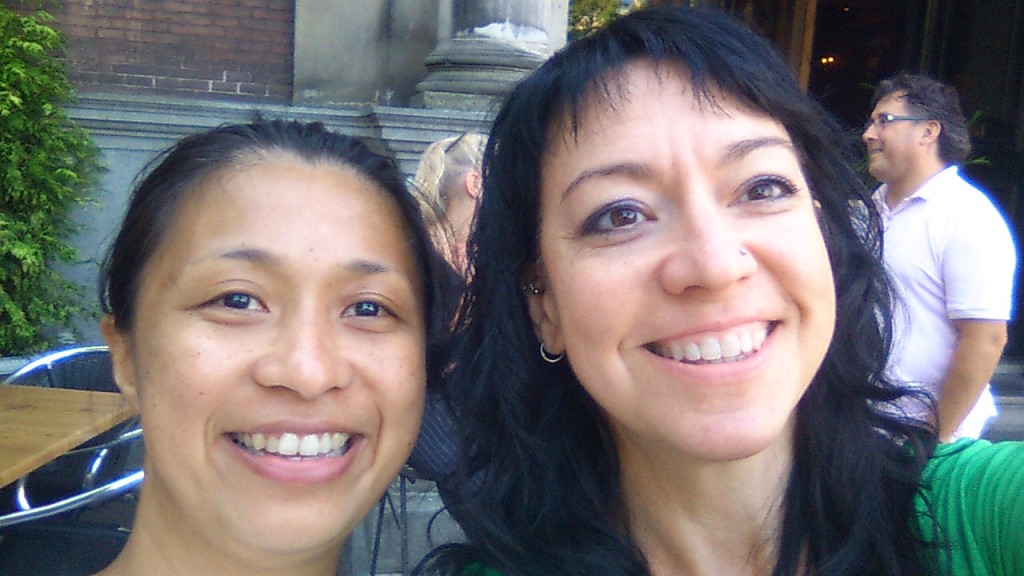 Today was the Bridge to Bridge. This was my second time doing the Bridge to Bridge, the first time was actually a 5K, this time (they changed distances for some reason) I did the 6 English Miles (almost 10K). The first time was pretty awesome, I had my fastest 5K time ever (only once have I managed a 5K under 30 minutes, this race was 29:58 -yes mofo’s that is still under 30 minutes). It was warm but not too bad, in fact I recall it being rather pleasant. Today was just insane. Almost 30 degrees(86 F) and our part started at 1:45pm, so pretty much almost at peak heat hour. We cycled the 3K downtown and had a drink before warming up (a “normal” drink of sparkling water with lemon), and then pretty much we were off. The first 3K I managed at a good pace of 6:30 but after that it was just kind of crazy. I had to walk quite a bit, it was just too hot. I had one other kilometer that I managed in 6:45 but the others were in the 7 – 8 minutes range. Luckily it was VERY well organised. Lots of water stations, sponges and even people with spray hoses. I came in at 1:10. Not my finest race but very happy to have participated. We stuck around to see Patrycja come in and cheer her to the finish line then had a couple of beers and came home. WHAT A DAY! 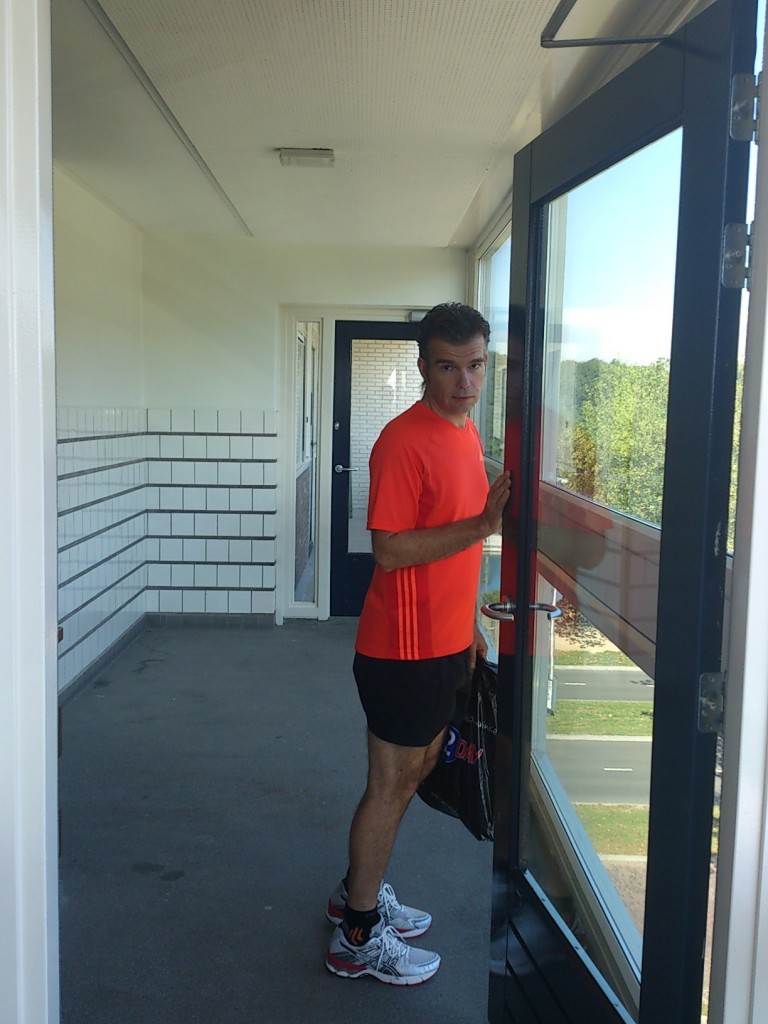 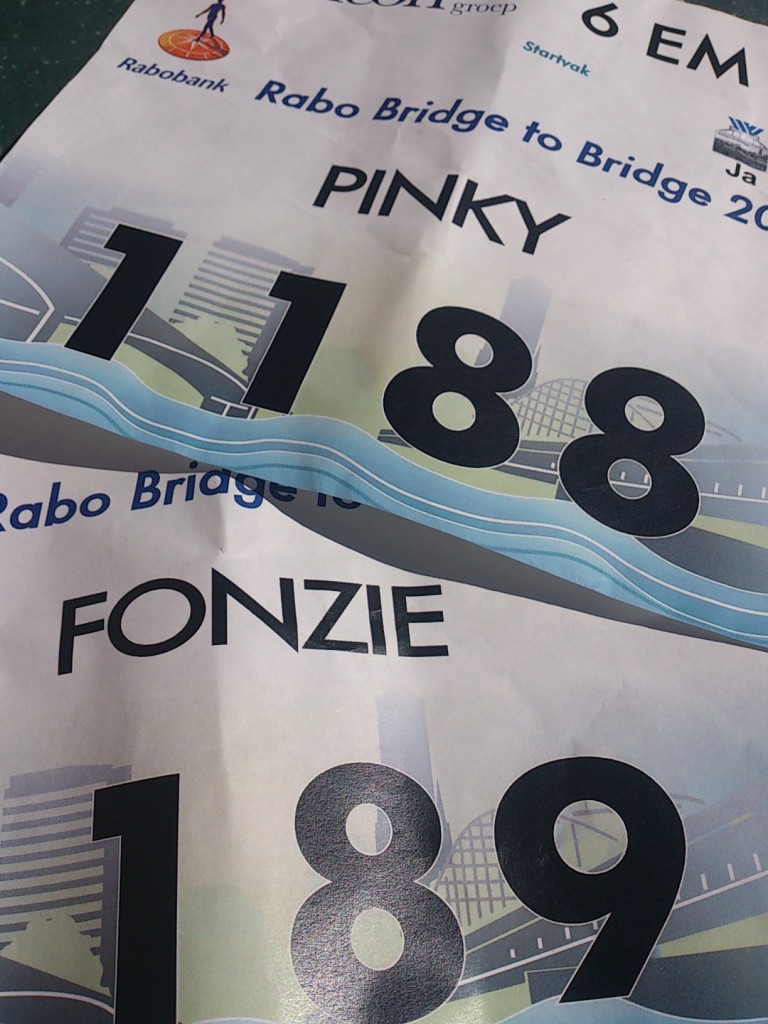 we were able to personalise our bibs, so we decided to do something different. 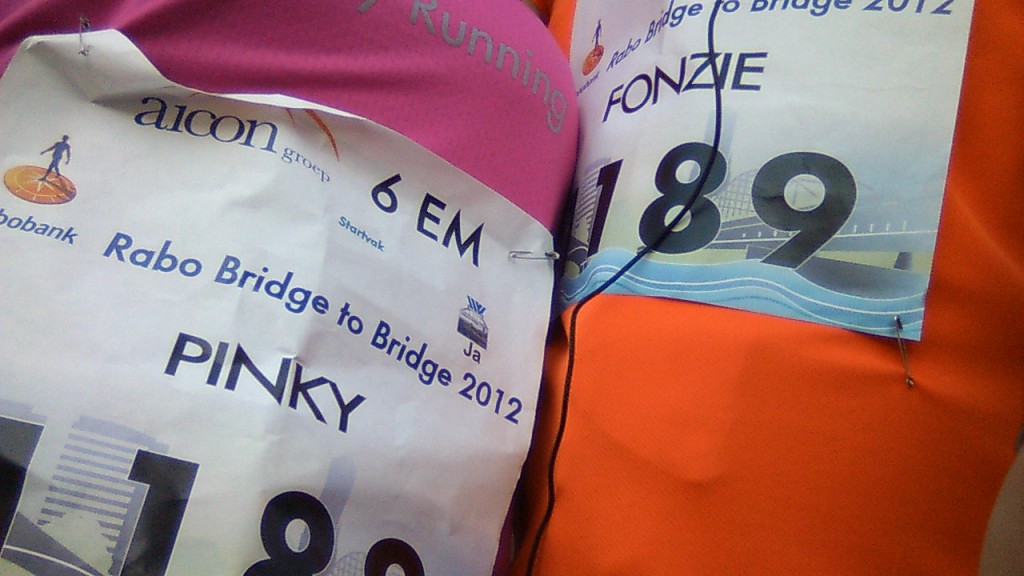 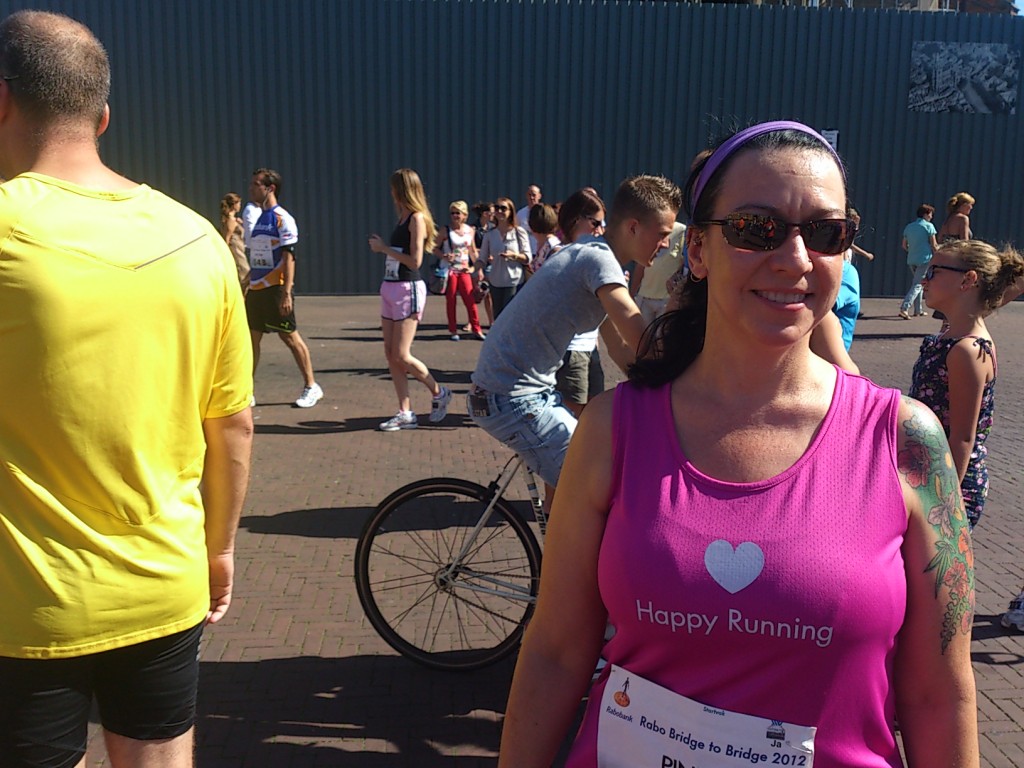 notice my new headband that my friend Suz sent to me, just in time for my birthday! 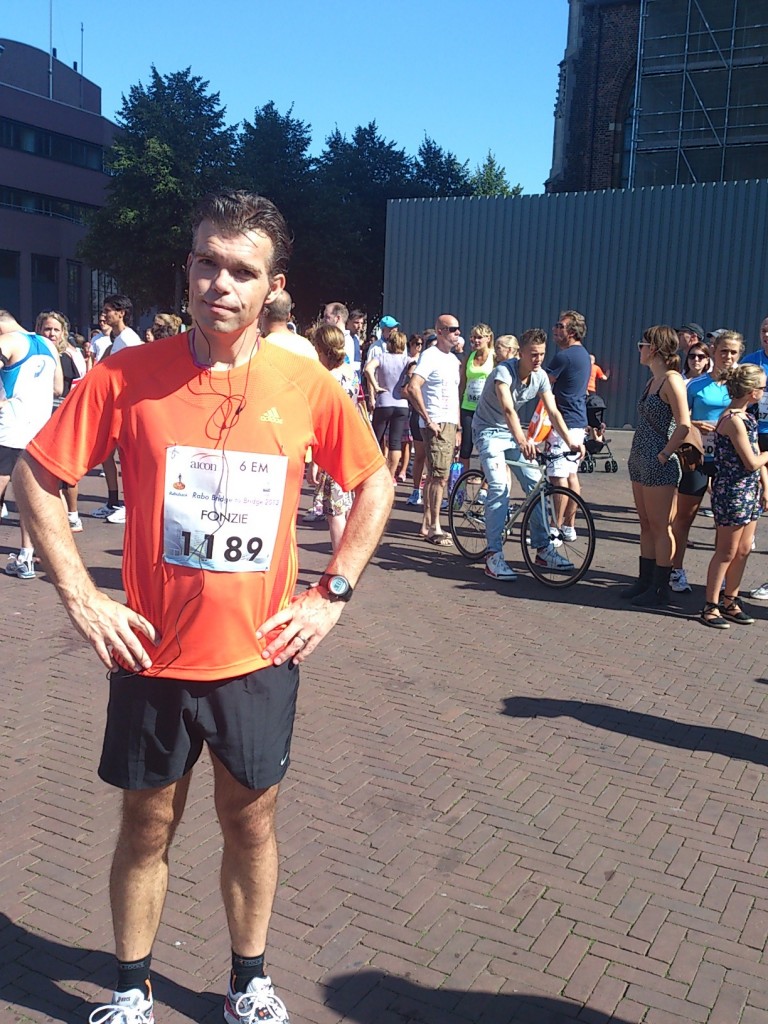 The Fonz is READY! 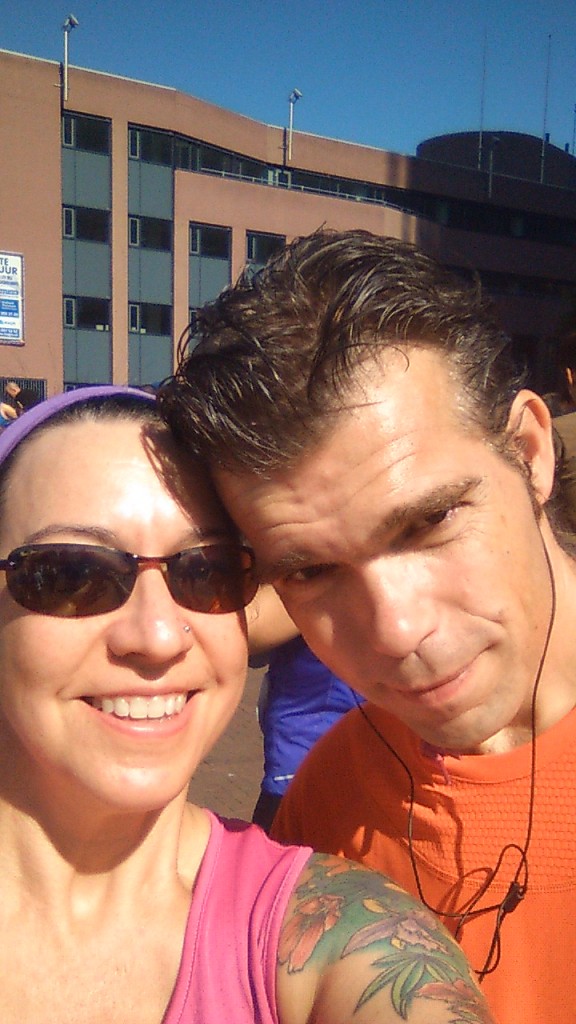 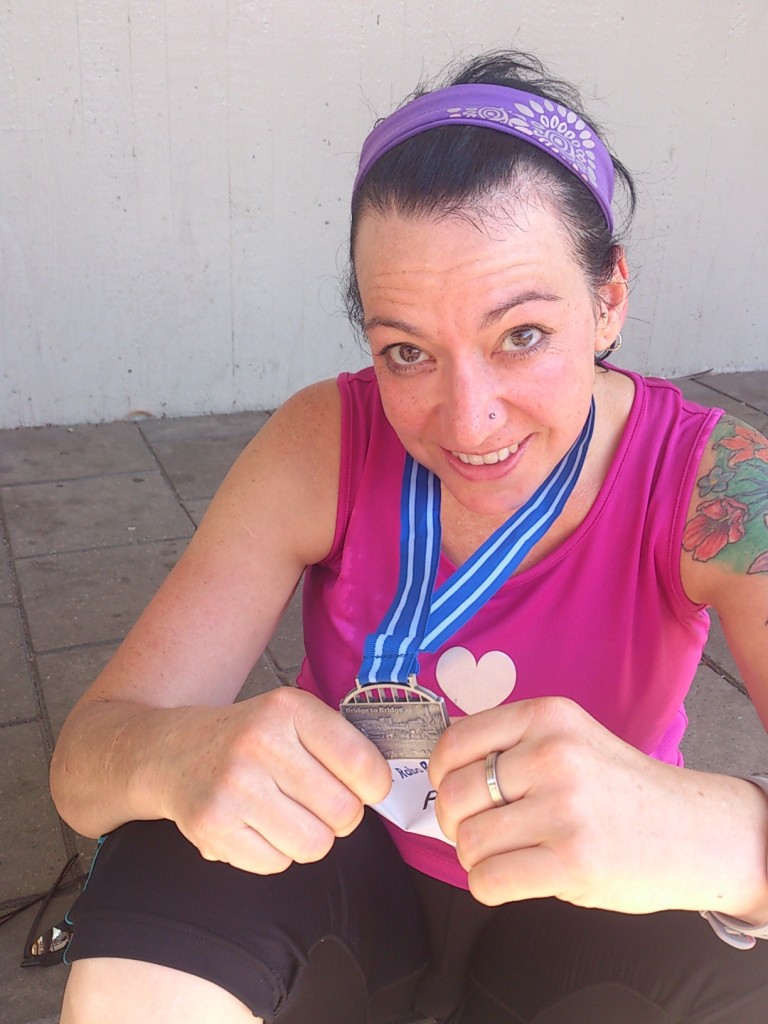 A Hot Mess with a Medal 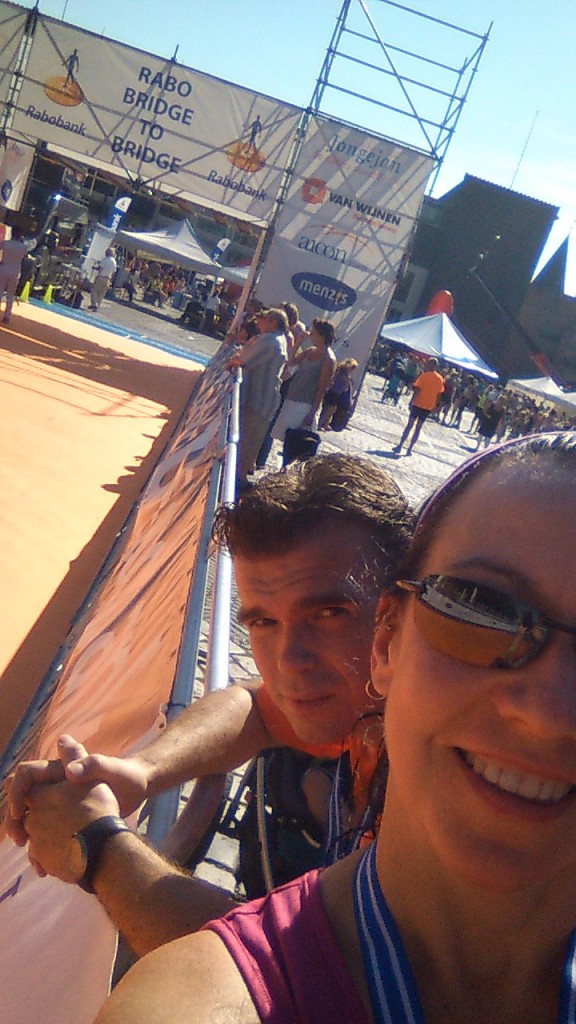 staking out our place at the finish for the 3EM’ers

So, how was your week?