I suffer from PFD – Part I

And I’m in a bad way. It could be enhanced by hormones or jetlag but honestly, I just feel, well… empty.

What an amazing, crazy weekend. How crazy was it to fly to go to Baltimore, MD just for 4 days??? I thought I had lost my mind when I bought the ticket to Fitbloggin back in January, and originally I was going to share a hotel room with Paola who unfortunately wasn’t able to go as of a couple months ago. I thought maybe that was a sign I shouldn’t go, but I put it out on twitter anyway, “did anyone need a roommate for Fitbloggin – I lost mine and need to share a hotel room with someone?”

What do you know. Robby answered the call. 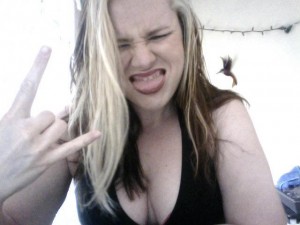 my kind of girl

My first thought was excitement, because I really like Robby, and I’ve been chatting with her and reading her blog on and off for about 3 years. Then I thought “does she know me? does she have any idea if she really wants me to stay with her? what if she doesn’t like me?” Yeah. Dumb, I know.

Then at some point two others came on board. Michelle and Melissa. With how nervous I was and those old feelings of insecurity cropping up (and self-doubt “what the fuck am I actually doing??”) I had zero to be worried about. I could not have asked for 3 better friends to stay with last weekend, women I didn’t really know at all, who were just, for lack of a better word, amazing. 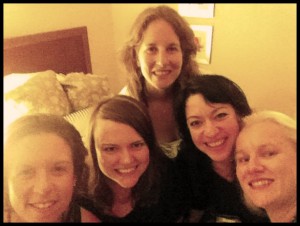 My extremely long day of travelling on Thursday was all about getting checked in and registered as soon as I got to the hotel (driving from DC to Baltimore is hell during rush hour – I learned the cold hard truth that not all airports are like Amsterdam that have a train directly to where you want to go, right at the airport), and immediately I met more amazing women, including Sheryl 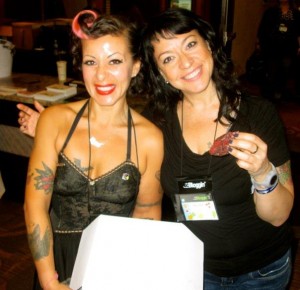 Bitchcakes and Pinky together in one room! (and yes that’s a red velvet donut in my hand as well…) 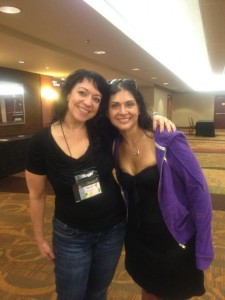 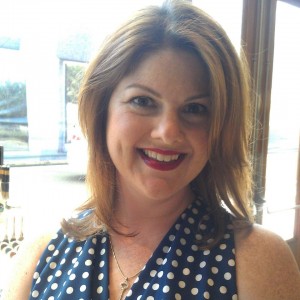 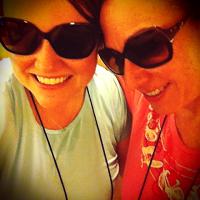 These were of the first of many – there were several others as we trudged along to a bar called the Green Turtle so Robby could watch her beloved Giants play football during which we luckily witnessed a Dine ‘n Dasher apprehended by a Flying Bartender and our very own Robby, who put that little fella in his place until the cops arrived (Exciting stuff!). I ate a crab cake something or another (I was recommended to eat crab whilst in Baltimore) but at some point I just really needed to get some sleep so I hopped in a cab with some others and went back to the hotel. As luck would have it, my girl Kenlie was in the lobby so I finally got that long-awaited in person hug! 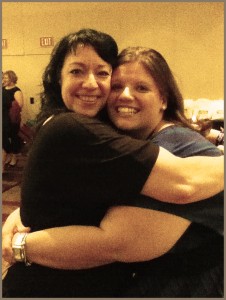 hug number 372 (we were making up for all the hugs we wanted to give over the last year or so, in a very short period of time)

I needed sleep and we had a early start for the morning!

Robby was out later than we were so she slept while Michelle and I got up early to go do cross-fit. Yes, cross-fit! I was totally pumped about trying it and with Reebok as our sponsor I was pretty sure there was a possibility to get our asses kicked. While I’m sure it wasn’t like a true WOD it was a chance to know what it was all about. Michelle and I were pretty much already wrecked after this class as were several others. Afterwards we had some breakfast and then later attended Cathe Friedrich’s class. Wow. I guess she didn’t get the memo that we just did cross-fit. My abs and thighs – ouch. With Cathe after the workout: 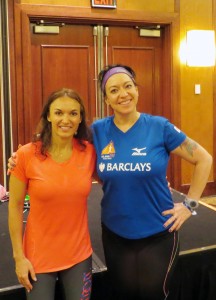 Between the workouts we had breakfast which was graciously provided for by several different sponsors – we had eggs and quinoa and Weight Watchers cheese and plenty of other stuff. Let’s just say we did NOT go hungry nor did we eat a bunch of crap that weekend (well, mostly not!) After Cathe’s workout we walked around, got free stuff, tried lots of yummy samples of things. Spent some time with the Reebok ladies (and got free stuff) and talked with Martha McKittrick for a longer period of time about the health benefits of maple syrup. See the video for Robby’s, mine and Michelle’s 5 seconds of fame.

At some point we realised we were going to miss the Self-Acceptance and Weight Loss discussion hosted by Shauna, KC Anderson and Mara Glatzel, if we didn’t go up to our room and finally shower and get dressed like normal people did, so we hobbled upstairs (after 3,682 squats one tends to hobble) to do just that. Melissa finally arrived and was graciously greeted by me half-naked and Michelle in the shower. It was adoration at first sight.

We were in fact late for the session but not by too much. To be honest, I’m going to have to go back to this subject at another time because my head is swimming with all kinds of thoughts regarding acceptance. I’ve written about it a lot (I think) since for 2.5 years nothing happened in the weight loss department and I was pretty much forced to accept where I am now or be miserable and angry for a very long time. In any case, a great session, which you can also read about here.

I believe after that I attended Emily‘s Session “Using Social Media to Drive Blog Traffic” – again Emily is a blogger at Skinny Emmie which I have a great amount of respect for; I’ve been reading her blog for a good couple of years and I just really like her a lot. So it was good to get some ideas from her (that I now really need to put into action, or rather, I feel like I do) to improve my and your lowfatpie blogging experience. And of course it was lovely to meet her afterwards.

At some point we lost a couple of the girls so Melissa and I hung out for a bit. We walked over across the road and had some delicious eats and beer (because let’s face it, after all that exercise, it was necessary) and after dinner we reconnected with our roomies to all go to the evening Ignite session which is described as

This was great fun and I even won a winter running cap with speakers over the ears for coming the farthest for the conference.

Afterwards there was mingling and deciding what to do and eventually 5 of us went upstairs (since Dawn wasn’t sleeping in our room but still our sister from another mister) and basically had a few drinks but more importantly lots and lots of laughs. We later went down to the hotel bar for a few more bevvies where I was able to talk to Alan for a bit and my lovely Kenz again as well. At some point we went to another room where Sue was celebrating her birthday (it was, after all, after midnight) – it was a very full hotel room to say the least! We didn’t hang out too long, because even though our Zumba instructor for the next morning was seriously getting her drink on, we didn’t want to have any sort of strange alcoholic beverages still swimming around our bellies for her class.

I seem to only be up to Saturday now, so I’ll stop here so that you can go take a break or a nap or have a 5 course dinner, whatever you would rather be doing right now other than reading this recap.