Week 15 – This is pretty much it #roadtoberlin

Well, we are seriously in taper week my friends! As of this writing there is officially less than 7 full days before the start of my SIXTH marathon. And the first time running the full distance in Berlin.

Week 15 was not the best week for me emotionally. Well, let’s be honest, the last several weeks I’ve kind of mentally been all over the map. It gets tiring to continually have pain (or have my foot tingling) and it gets tiring to continually go to various appointments and still not have any relief or answers. I try to go on and I try to start each day as positive as I can and it just wasn’t a great week. That’s ok. I’m human.

Monday – Rest day. Didn’t sleep well Sunday night so it was good it was a rest day. Actually cooked dinner that night. Rarely happens with our schedule. Something I missed and something the dietician mentioned that I really do need to do (have a warm meal in the evening).

Tuesday – Was supposed to be intervals day, however, I had an appointment with the chiropractor late in the afternoon and I didn’t really feel like it once I got home. So, another day of rest.

I actually was super happy to find out that the chiro is American! I don’t have any issue communicating what I need to say in Dutch, but there is just nothing like really speaking your own language! So really it was a great appointment. He had me do tons of tests, readjusted my L3,4 and 5 a few times, and cracked my neck for good measure. I didn’t actually know what to expect – I hadn’t been to a chiro since I lived in Portland (so, maybe 25 years ago??). I will see him again next week. Since the appointment I do have to say I’ve had less tingling, in fact Wednesday I had none but it was back on Thursday.

Wednesday – I did have an appointment with the manual therapist and wasn’t on time to cancel (since I ended up going to the chiro so soon), so I went, explained to him that I saw the chiro and he didn’t want to take any risks that he would undo anything, so we agreed that our appointment was cancelled. Too bad I got up at the crack of dawn to be there for 7 am… I went back home and had another shot of espresso before going to work!

As far as running goes, it was time to get those intervals done. Ron also had to do intervals so we both headed back to the dike (it gets boring to run the same places, but the dike is handy because there is no traffic save for cyclists and maybe a tractor or two :D ). 6 x 800’s with 200 meters rest in between. 800’s were around 5:28 minutes per km. I have to say the intervals are going really really well for several weeks now. In fact, this time around it’s been great, I can’t believe I can manage it when for Paris it was a total nightmare. Maybe it helps me in the end? 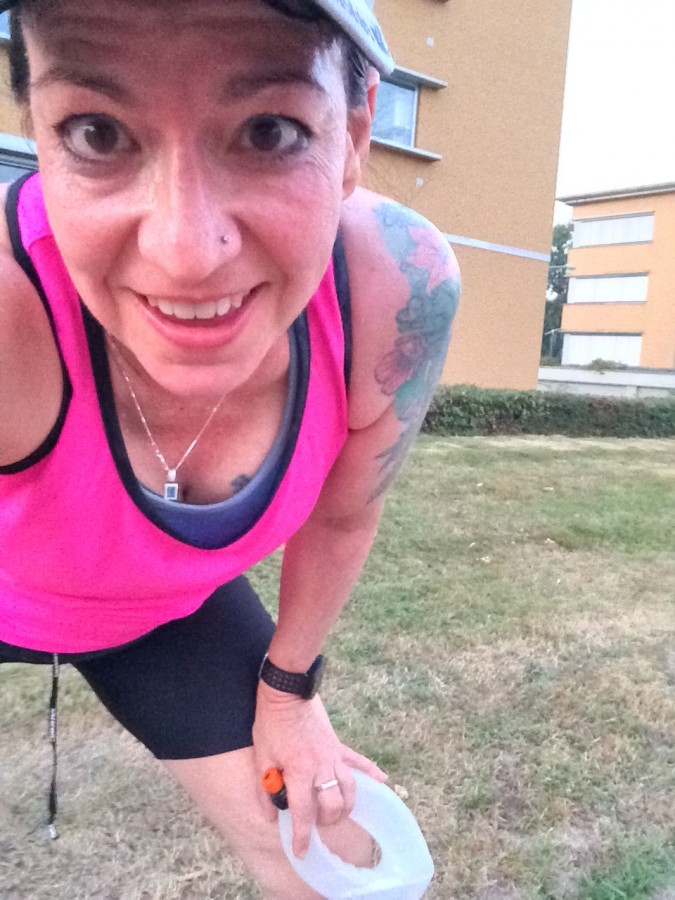 Thursday – I had my threshold run on the plan, but to be honest I did NOT feel like running at all. It was very warm and I thought biking would be much nicer. So, Ron and I both went on a little bike ride – 20 KM – then went to Cafe Metropole again for dinner. And beers. I’m glad we did that, I did not have a great day at work and I just wanted to do something nice that had nothing to do with running. 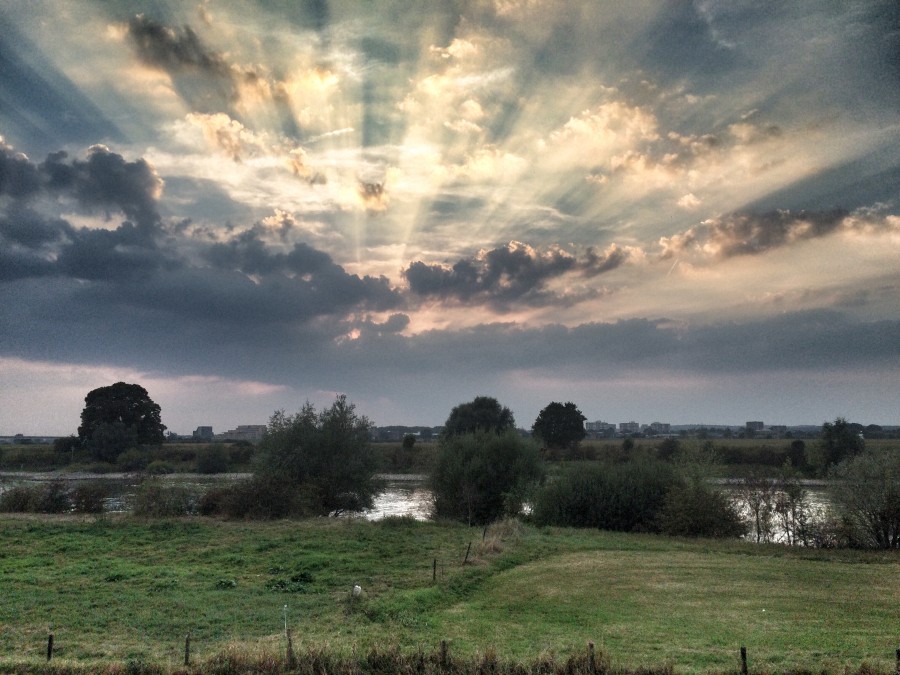 gorgeous view before the sun set.

Friday – I had another stressful day at work, and even ended up working late and was not feeling it at all. I guess that is what happens during taper time? Anyway I fiddled around for a quite a bit before going out and programmed my workout in my Garmin. We left the house together (Ron had to do his own workout) but then I noticed my Garmin didn’t sync! So I went back in the apartment to try to sync the watch again. It just wasn’t happening! I thought OK you just have to go and deal with it and it’s fine and you will make it without the d*mn workout on your watch! It was supposed to be 4KM easy/ 4KM threshold / 4KM easy, but it was getting late and I did not want to get stuck out in the dark. So I made it 3/4/3 and just had to keep an eye on my pace during the threshold part. The thing is, I MADE IT. I made it all on my own and I made it without the workout on the Garmin. So, basically I pushed through and got it down. Threshold average pace 5:41 min per kilometer. I didn’t feel great before but I certainly felt better afterwards! 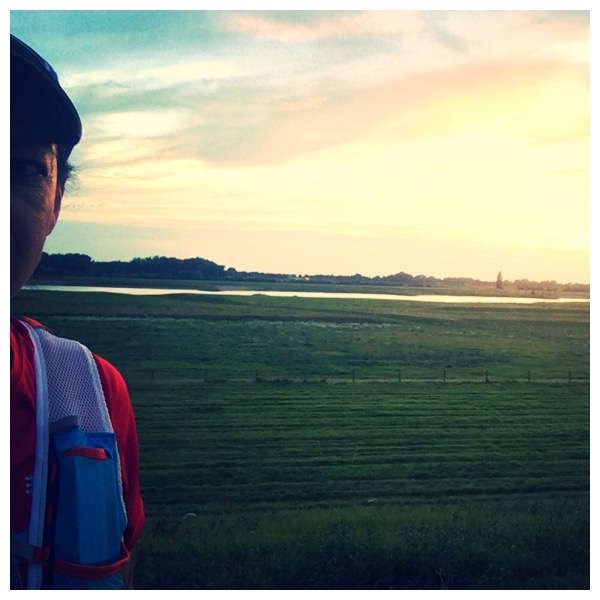 trying to beat the sun again at Westervoort

Saturday – up EARLY. I should have been sleeping in but I made a date with a colleague to meet up in Wolfheze by bike and then we’d cycle together to the Commemoration Ceremonies near Ede where the paratroopers dropped in 1944 for Operation Market Garden. Every year I miss this and I decided I was finally going! I had in my head that Wolfheze was about 10KM from house, but actually… it was 17!!! 17KM at 8:30 in the morning with HILLS. Ugh. Then we had another 5 to go to get to the drop zones. The paratroopers were supposed to drop around 10am but the weather conditions weren’t right so I missed them again. But it was still nice being out there, tons of old soldiers around from England, Scotland, Canada, the US and Poland. I had plans to meet Ron later in town, so around 11:30 I cycled 17 KM back to the city center of Arnhem. 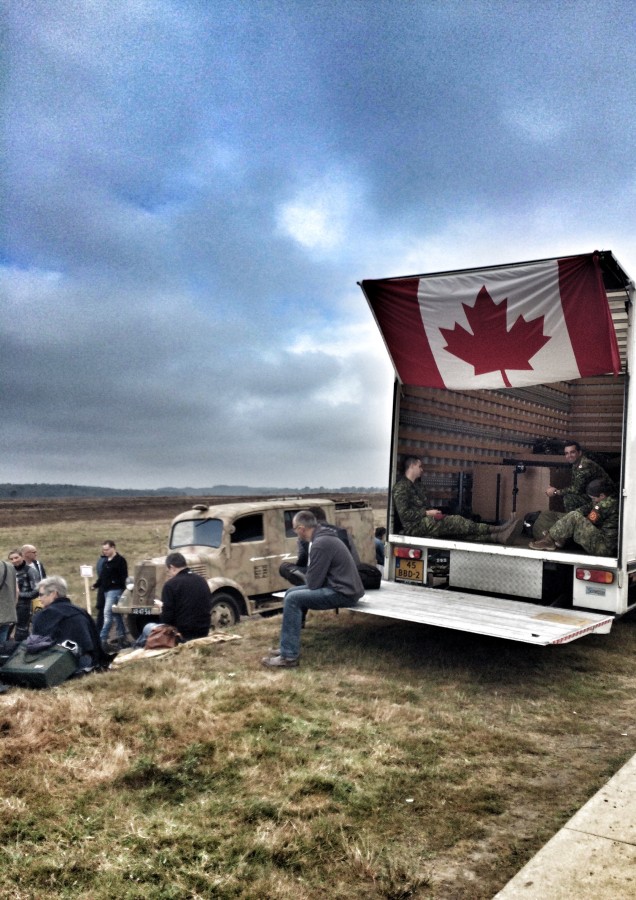 soldiers out at the Ginkelse Hei 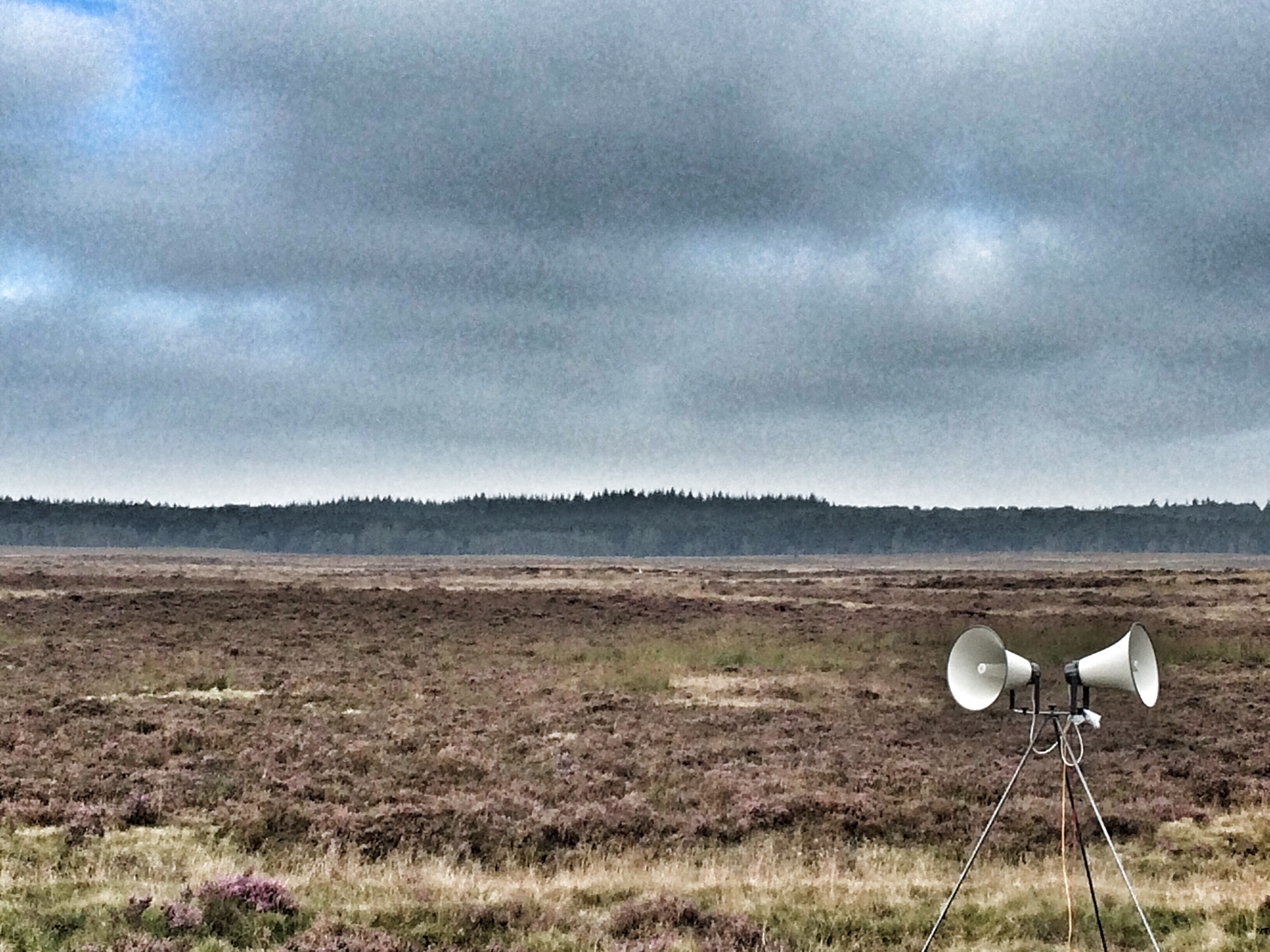 on the Heath near the drop zones 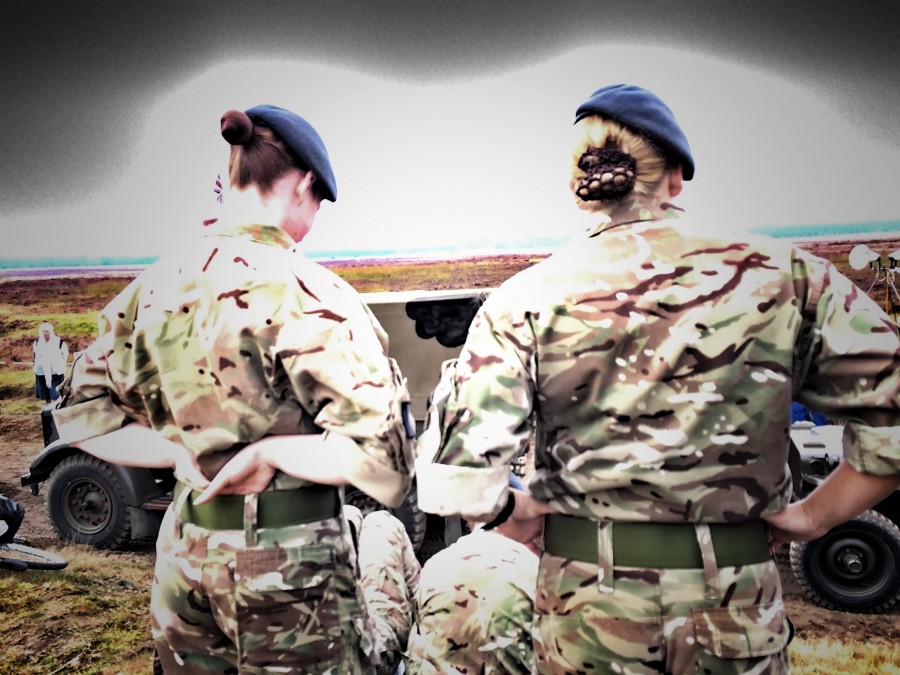 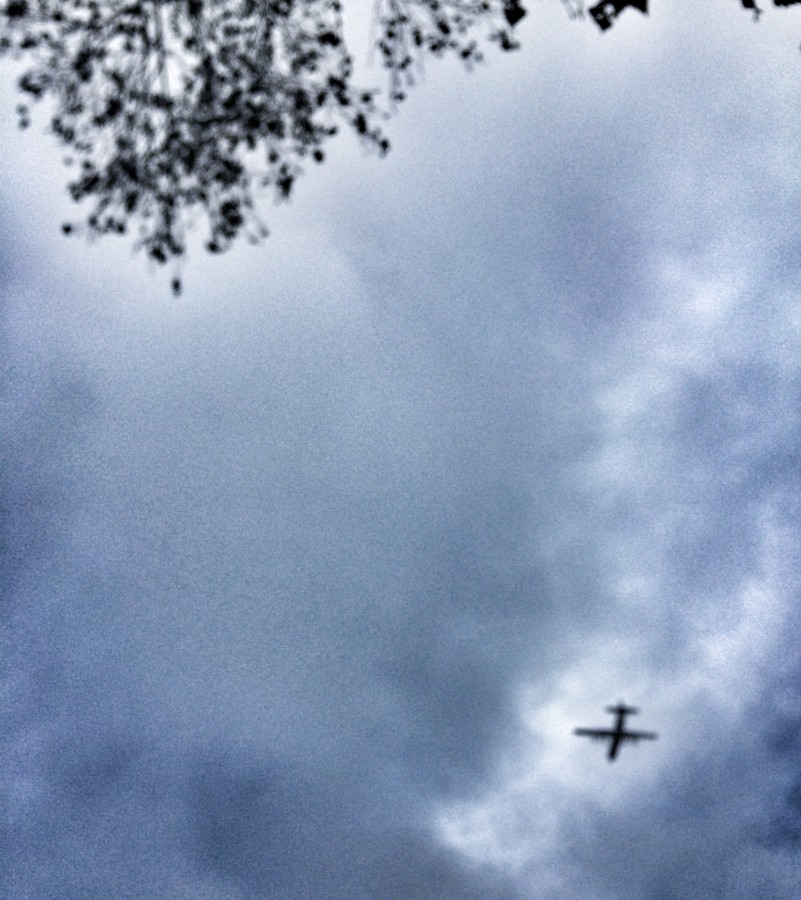 We were able to see only a few of the old planes.

I met up with Ron and had coffee and lunch, and then we went to see A Bridge Too Far, which was playing for free at the cinema (since it’s all about the Commemoration these last few weeks). I hadn’t seen the movie for about 30 years! I also didn’t realise it was a 3 hour film! It was totally a different experience to see the film knowing that I was sitting in the place where the bridge was simply too far for the operation to be successful. I’m very thankful for the allies, that they took on such a challenge even though the odds were really against them.

After the movie, we met Melissa for a drink before she went went to meet some other people and Ron and I ate dinner, since we were now too late to get to the supermarket to cook at home… it was a LONG day actually.

Sunday – LAST long run day. Slept in a bit, though sleep was not the best as the foot was tingling occasionally (which wakes me up). We had a leisurely morning, breakfast, coffee and then got dressed to go out to the dairy farm (that we run past all the time on the dike!) – they have a new shop and were having an open house to celebrate! The store is super nice and I made a mental commitment to go again more often for our eggs, milk and cheese (and honey and jam and other local products). 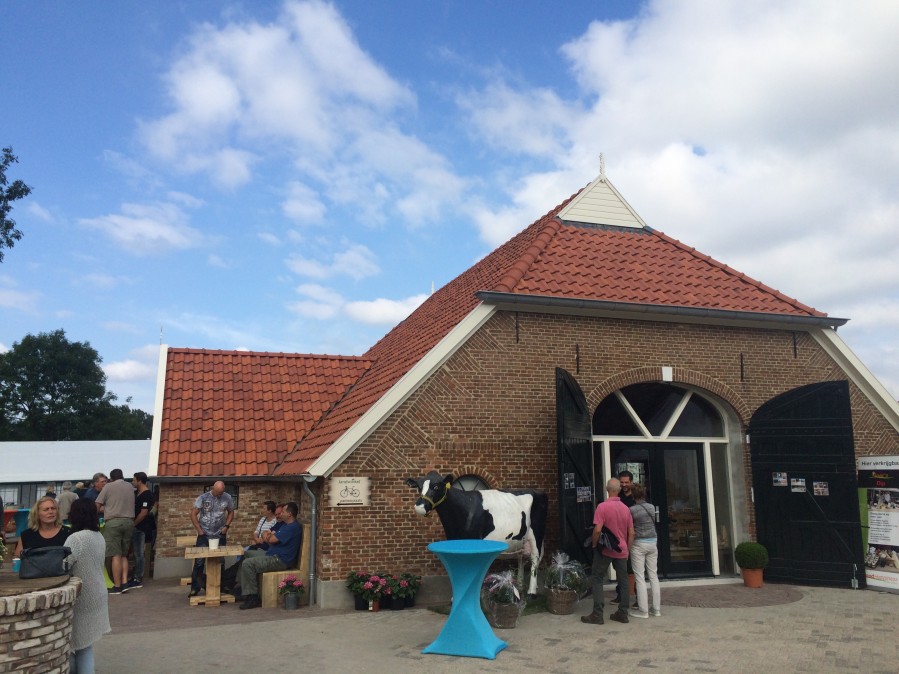 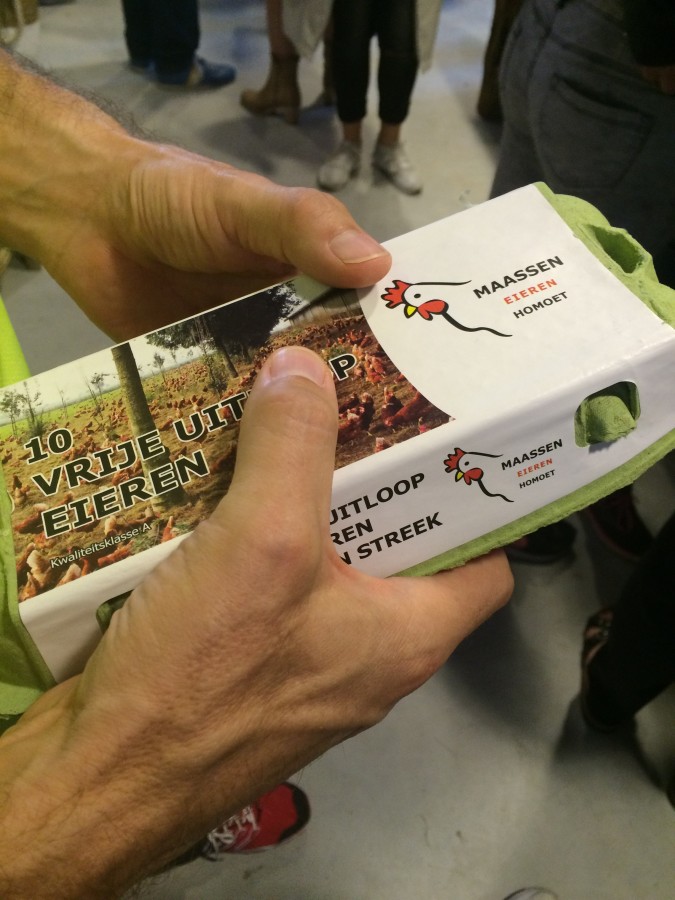 at least we bought eggs (after consuming our weight in cheese) 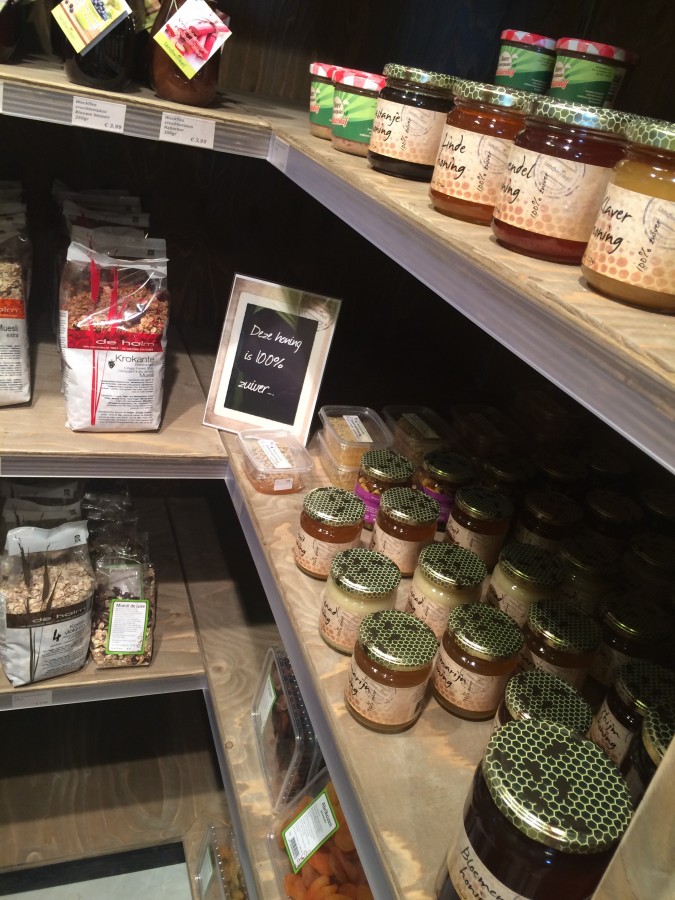 Afterwards we went home, got all our running gear together and went out to see my mother-in-law. We had a nice visit with her and about an hour later we headed out for our run. Since I really only needed to do somewhere around 10KM my plan was basically just to do the first 5KM at a good tempo and then the 2nd half I would take it in and enjoy my surroundings. And it was LOVELY. What a great, beautiful, sunny, cool, pre-fall day. And my legs felt fine. My foot felt fine. And I was in the woods. What more could one want? 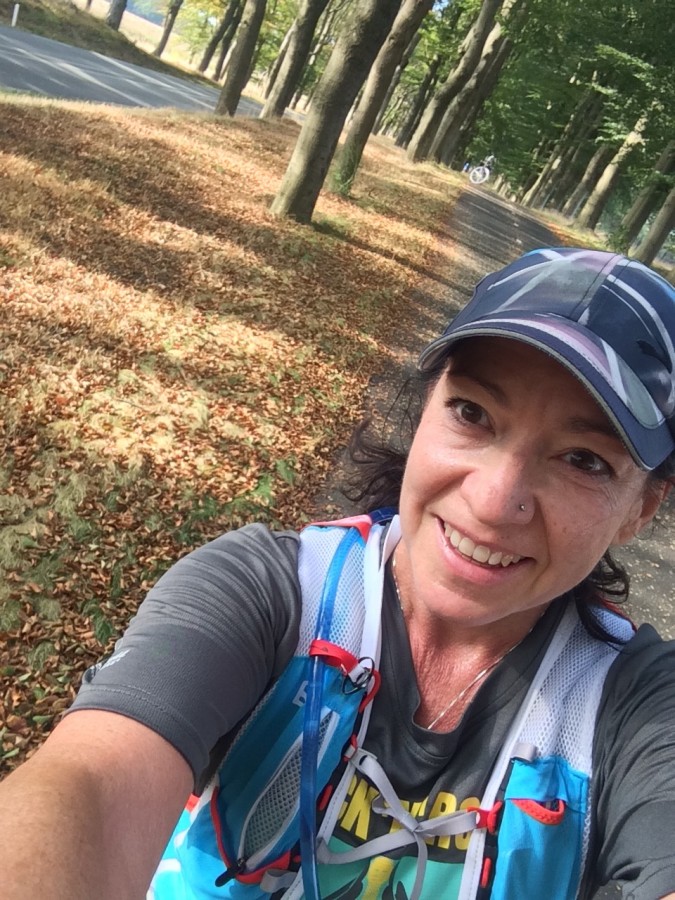 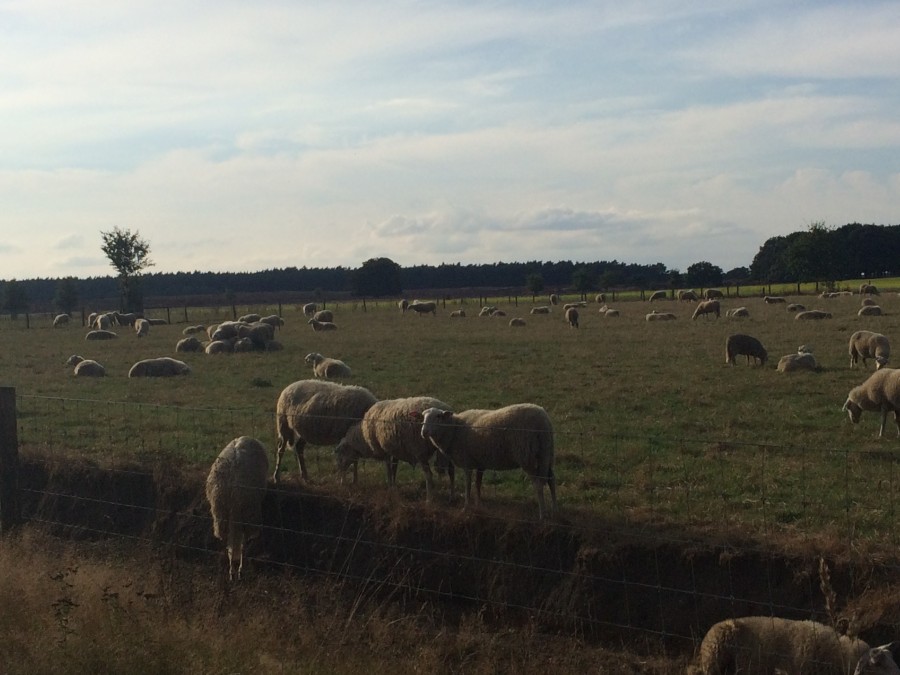 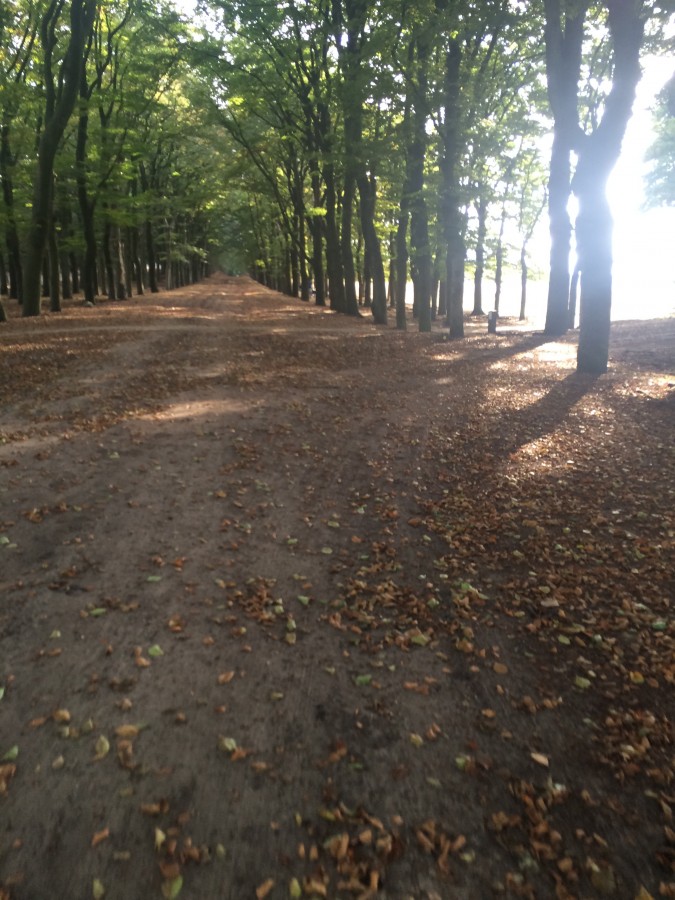 So that’s it. Next week is more tapering, trying to eat decently, and getting ready for our trip on Friday morning to BERLIN!!!!!

How was your week? Are you training or are you just running to enjoy the run? Do you buy locally sourced products? Have you ever heard of Operation Market Garden and A Bridge Too Far?