I know it’s a week later but it’s been crazy since I’ve returned from Italy! Where to start? 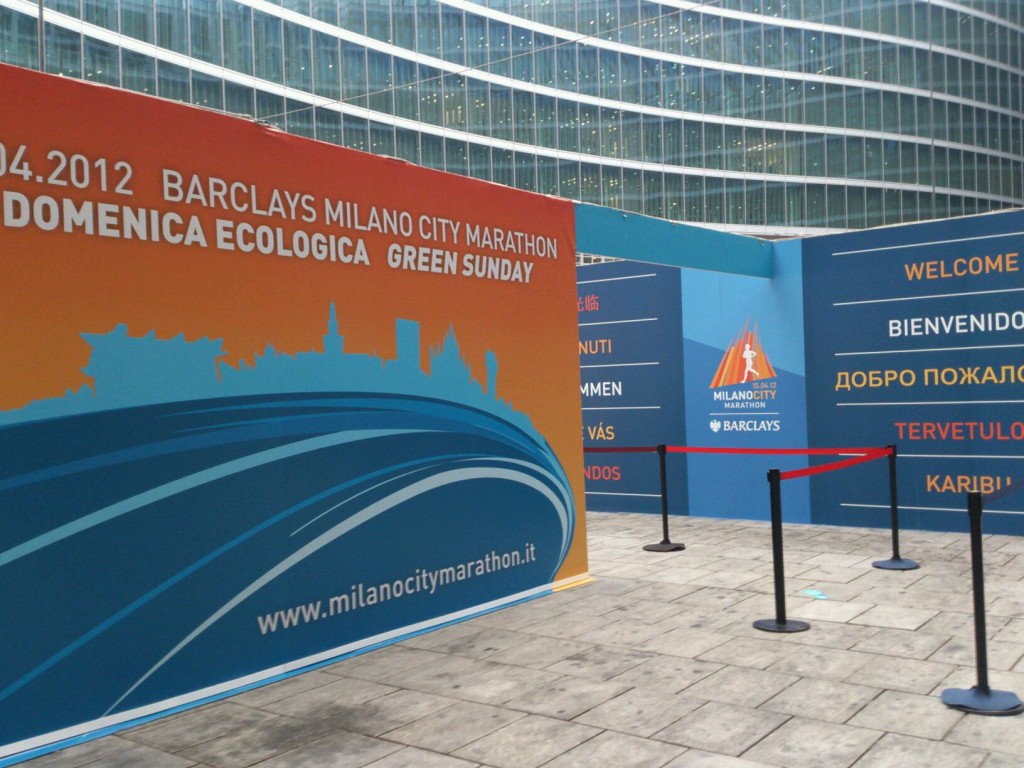 I actually took Thursday (the 12th) off of work because I hadn’t actually had much time to prep for the trip and the race. A few days before I received a phone call which inquired whether I would be able to leg 2 instead of leg 4 (10K vs. 7K) as the organisers had kind of messed up our order. Considering that I hadn’t really trained for 10K I stated my preference and hoped for the best. On Thursday, just in case, I went out around lunchtime and did 9K here in Westervoort (it’s a 1.5KM walk to the bridge and then a 7+K loop back up to the bridge again) as I didn’t want to do 10K cold after only doing little 5 and 6K training runs with the Hubs. Afterwards I was able to get my bag packed and prep up some food to take with me to be prepared for hunger and not give in to carbo-snacks.

On Friday I was up just a little earlier than usual and out the door a little earlier than usual and on the train at 6:45 to Schiphol. I’m one of those like to be early rather than late so to be sure I could check in my bag on time and get some coffee I arrived at the airport around 8 (my flight was at 10:20). Admittedly I did eat a muffin from Starbucks (and I did enjoy every bite without any stomach repercussions) but that was as exciting as my time at the airport got. The flight was uneventful (well besides the group of quacking ladies sitting all around me) and I arrived in Milan two hours later. I picked up my bag, and caught the €5 shuttle to Milano’s Centrale FS (Central Station) and then picked up some metro tickets to get to my hotel. Of course being the control freak I am, I had already studied the underground map to determine which metro lines I needed to get where I wanted to be :) Of course I figured out later that Centrale FS was totally walkable but better to have taken the underground instead of schlepping my wheelie bag down the street a kilometer.

My hotel was luckily recommended by a colleague who is originally from Sicily but lived up in Milan for probably the last 15 years. Originally we were told that we might have accommodation paid for by MCM who was sponsoring us in the race, but sadly this was not the case. I was happy anyway with my hotel and the location which was extremely central and I would most definitely go back there again.

I got settled in and was a little bit tired so I decided to take a quick cat nap before going out to have a look around. Once I was up and fresh again I decided to walk down the main road my hotel was just off of Corso Buenos Aires (a major shopping street), looked in a few shops and then decided to go to the Duomo, walk around, maybe get something to eat. 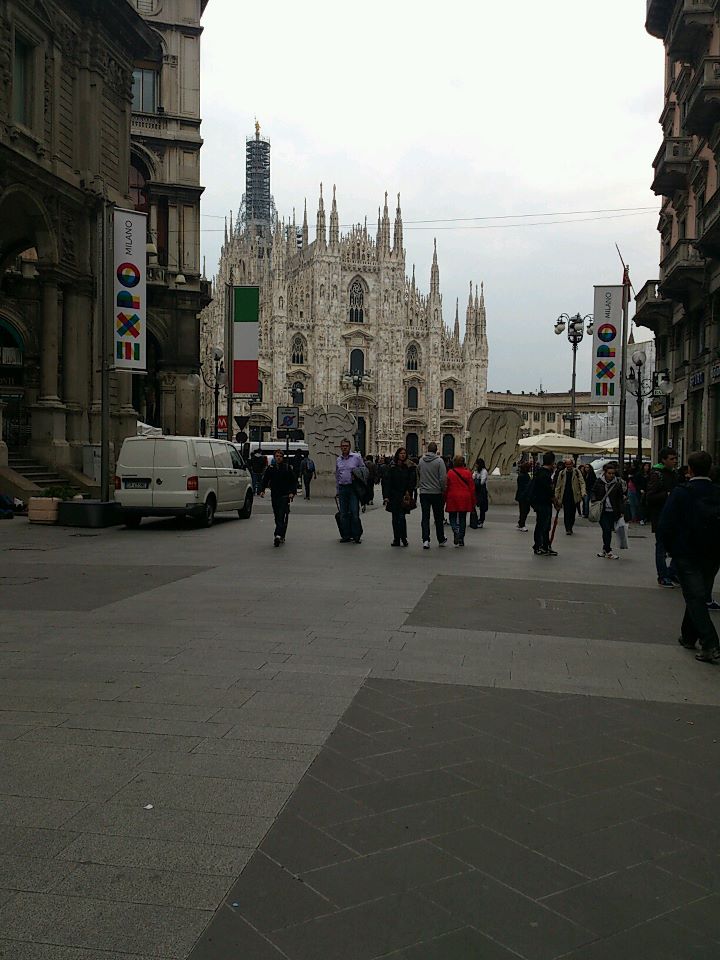 I’ve been to Milan once before and I am still in awe of this building: 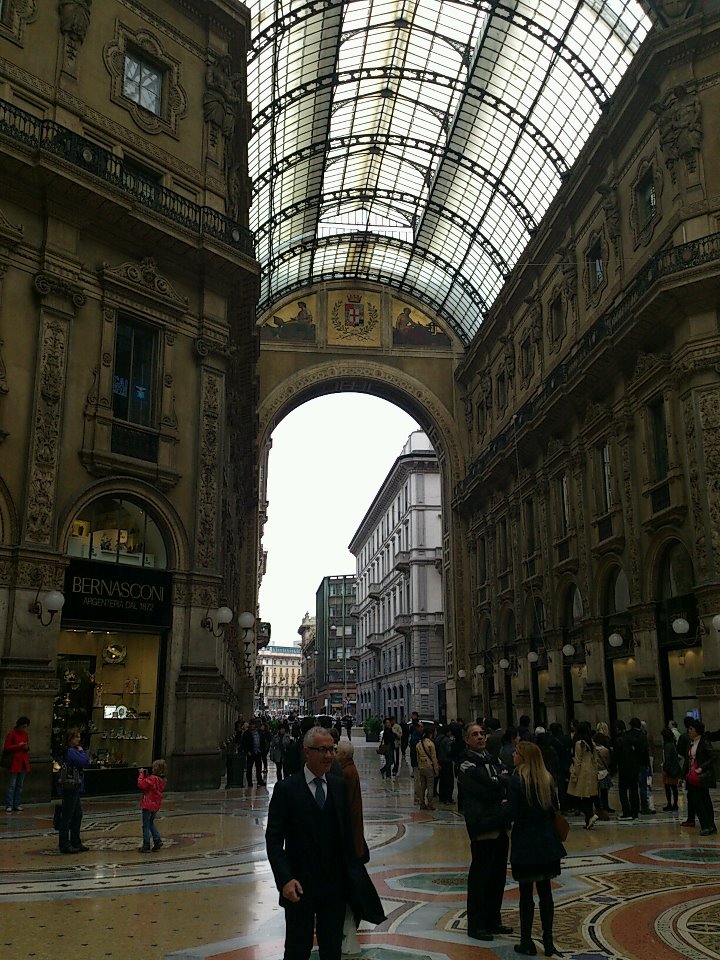 Of course this is the major tourist section of town and I just wanted to get a salad but at prices around €20 I really didn’t want to stick around there. I was looking at one place and the waiter was trying to get me to come in but I said no, it was too expensive and I just needed a salad nothing else, so he actually recommended me to go somewhere very close to there as it was cheaper. Unfortunately that salad was €12 and I could have made a better one myself but with fresher ingredients and less money. Ah well. They did have a good espresso :) 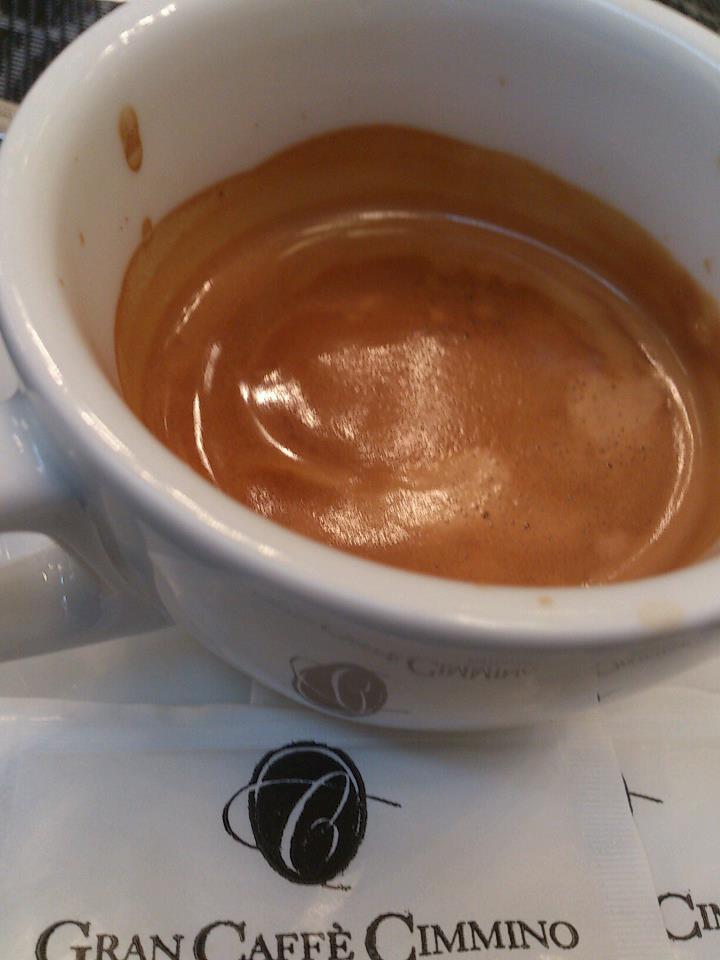 as much as I wanted to, I did NOT order my favourite Sicilian dessert that happened to be available at this restaurant… 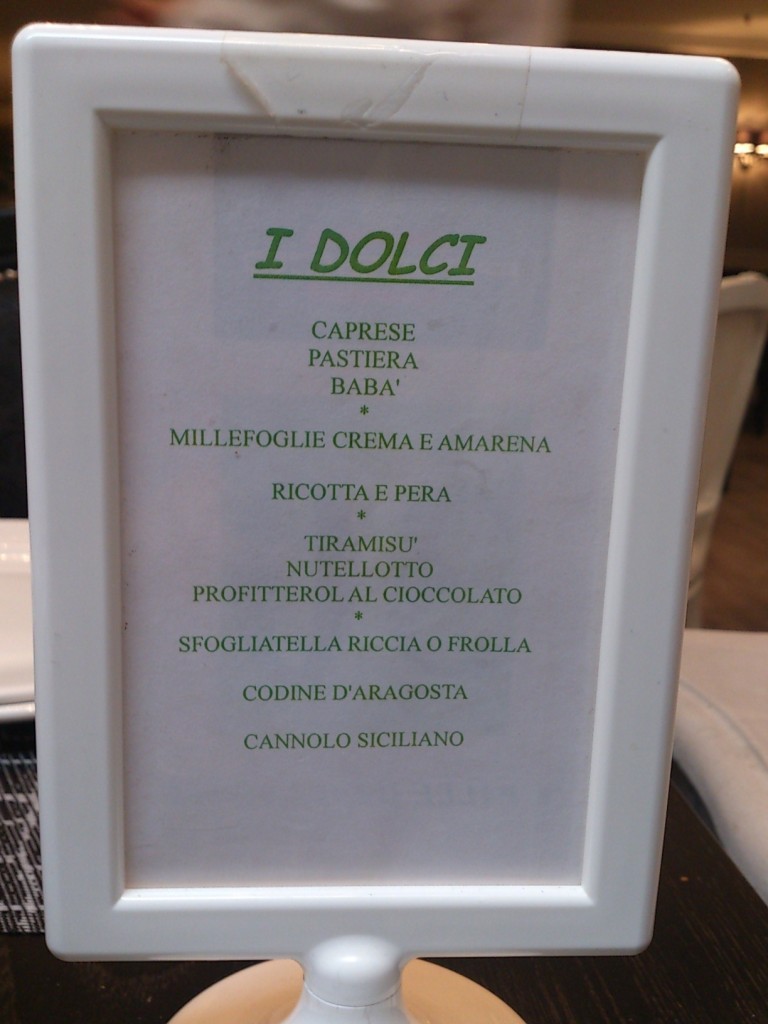 At that stage I got a message from Monique that the VIP party was at 8pm that evening and could I come? So after I finished up my sub-par salad and coffee I headed out to the Expo where the MCM Village was located. Of course I didn’t fully get that right and ended up walking in the rain quite a bit but finally found it. 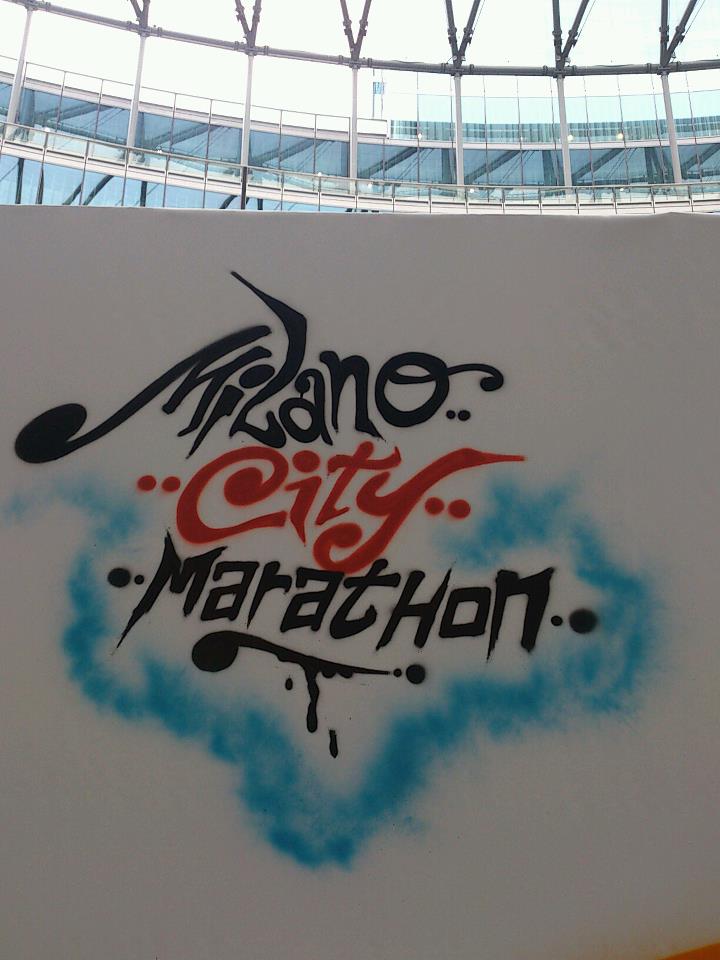 Amazingly enough as I was walking out I heard someone call my name! Hanna, who I’ve never met before, recognised me from my photos here and on Daily Mile :) How coincidental is that? I mean, sure, it was possible I suppose, but we didn’t plan on meeting there and I had no idea she would be with her boyfriend who was picking up his race packet for the marathon! We chatted for a few minutes and we went out separate ways. I headed back to the hotel, with a slight detour to the supermarket to pick up some snacks. Then I hung out for a while in my hotel room before going out again to the Expo to meet Monique and go to the VIP Party.

To be honest, we were a bit late in and maybe that’s why, but the VIP party wasn’t much. We did get a complimentary beverage and a water bottle, and there was food available but we did not partake.

Monique and Alessandro, one of the MCM organisers: 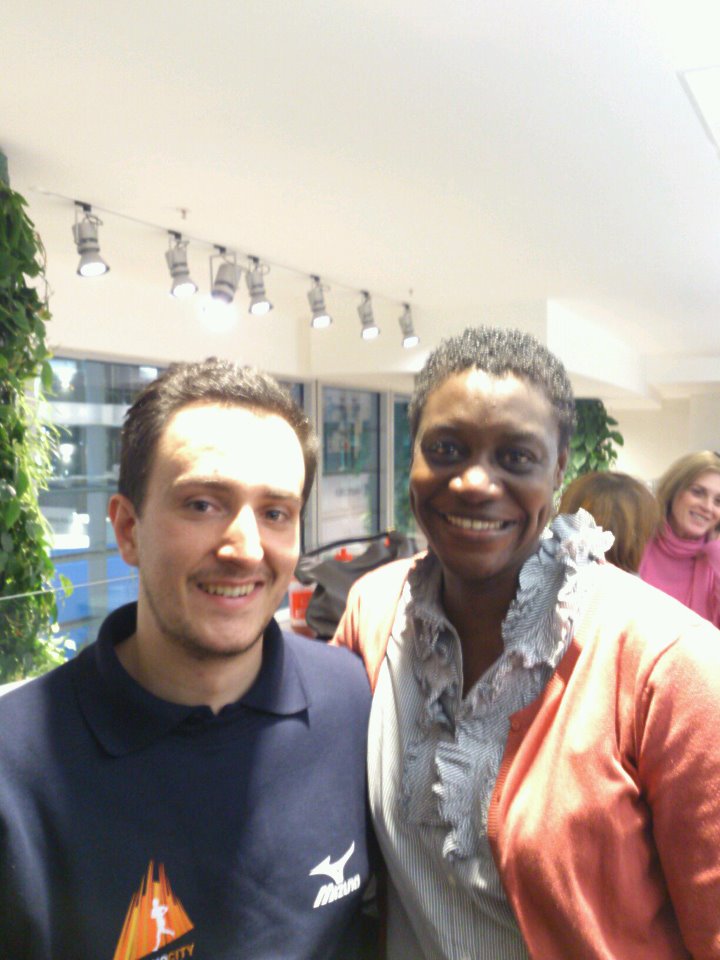 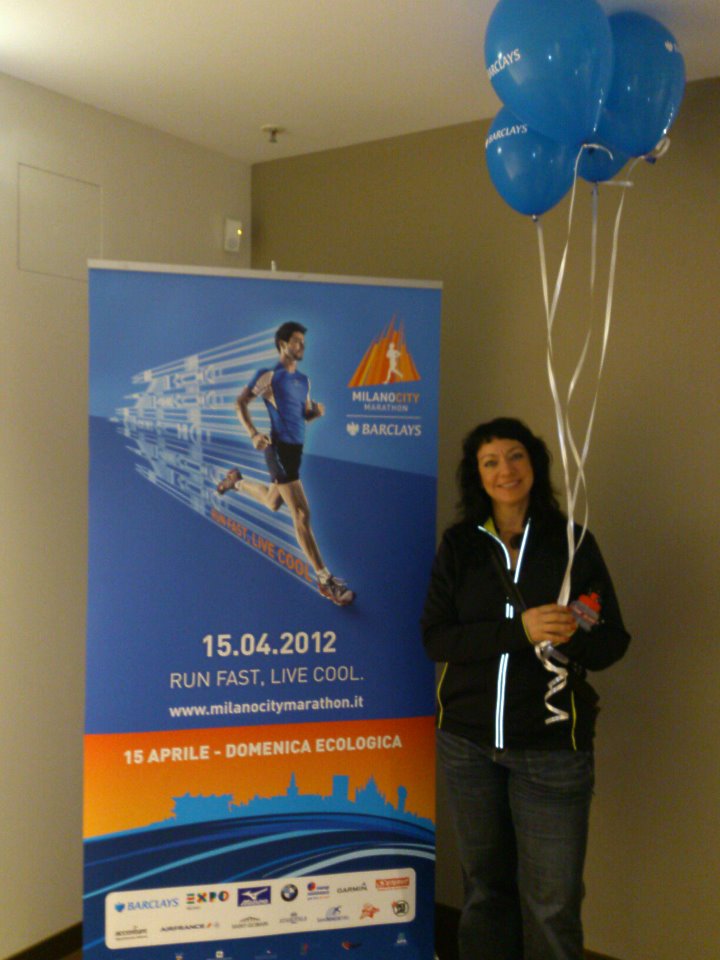 Monique had quite the adventure just even getting to Milan so we both were not 100% into the party. Ended up back at the hotel I’d say around 9:30 where I chilled out with a glass of wine and some nuts (pistachio – paleo style, yeah!!) 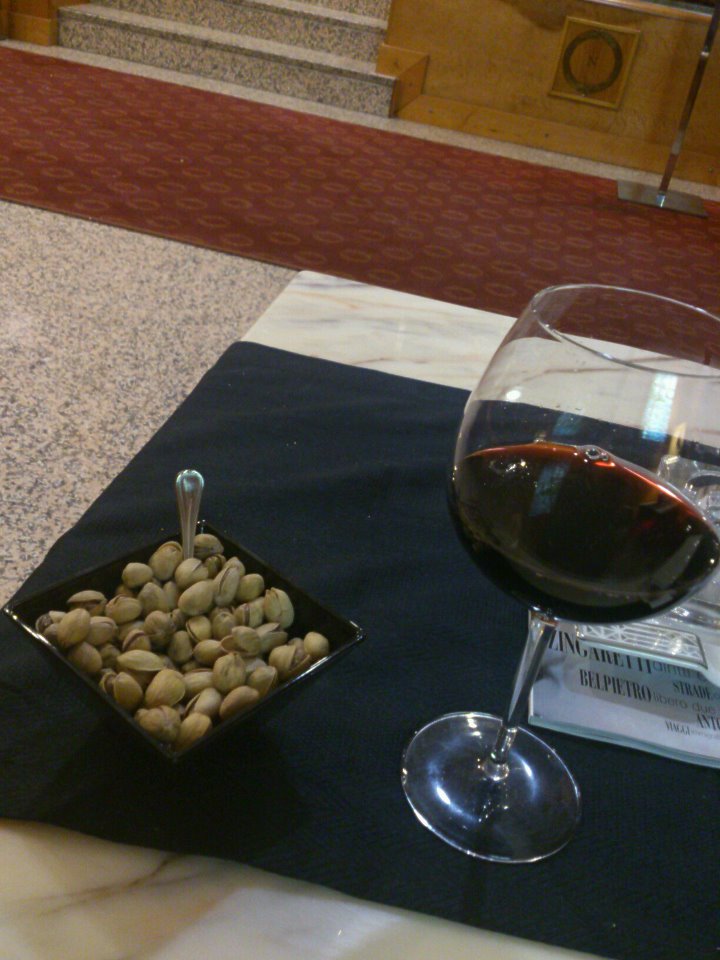 Saturday morning up early to meet the girls (Maya and her mom and sister and Monique; Hanna lives in Milan and skipped the tour) at the Duomo for a walking tour. As I said, I’ve been to Milan before but I don’t recall much from the trip and I certainly didn’t do anything touristy so the walking tour was a really nice experience. We spent about one hour alone in the Duomo, and then through the Galleria and up a shopping street until we reached the palace, which happened to be where the finish line of the race was :) 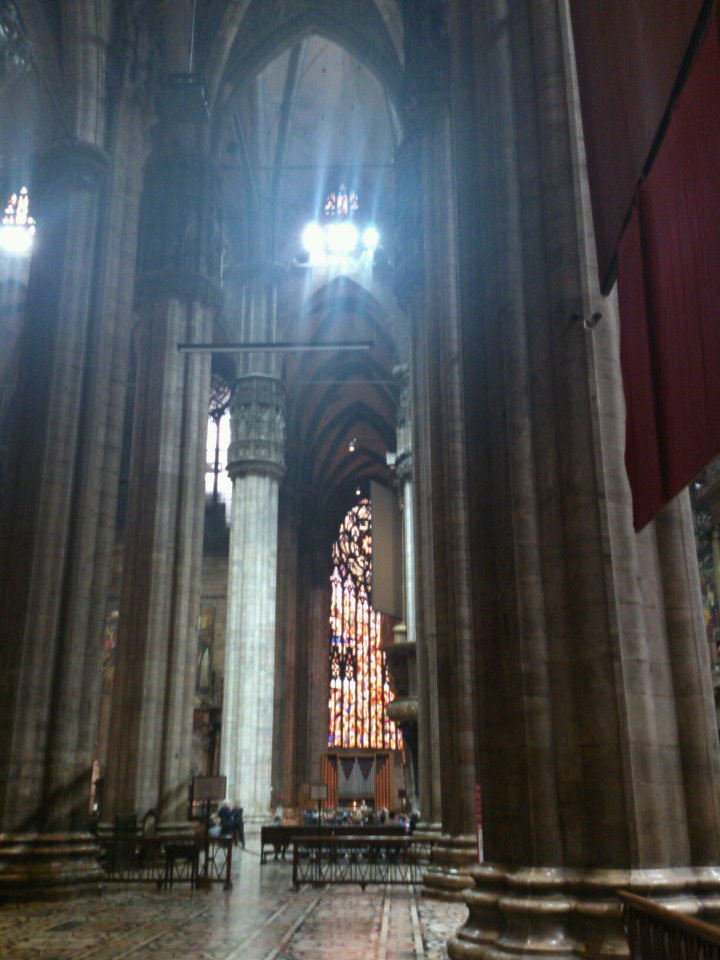 Fun Fact: I did not know that Leonardo da Vinci actually lived and worked in Milan for quite some time 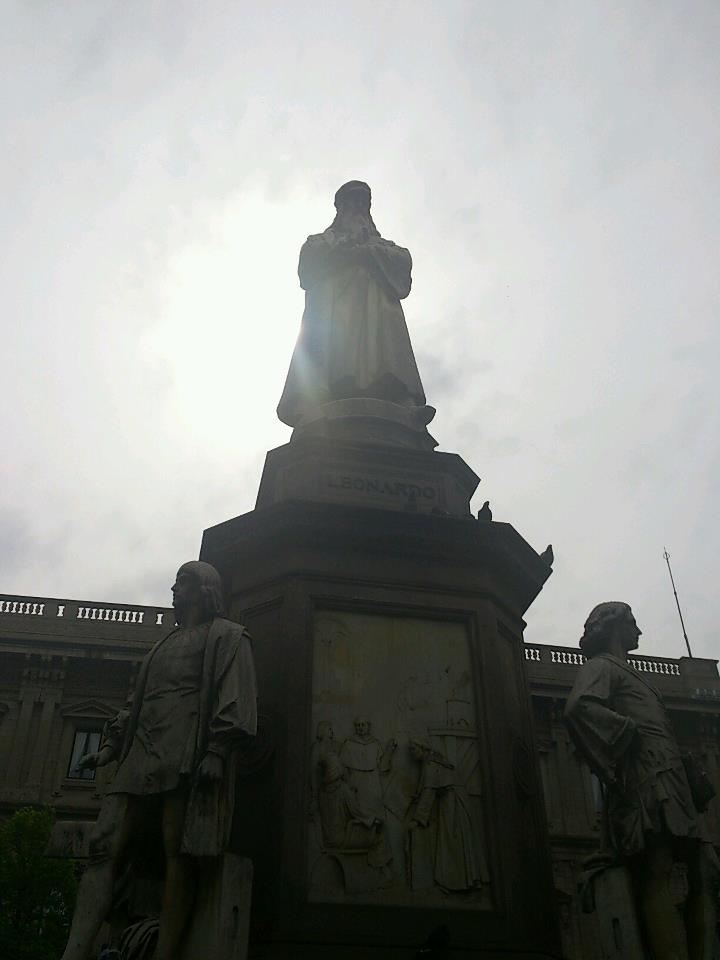 When I saw this I really started feeling nervous and excited! 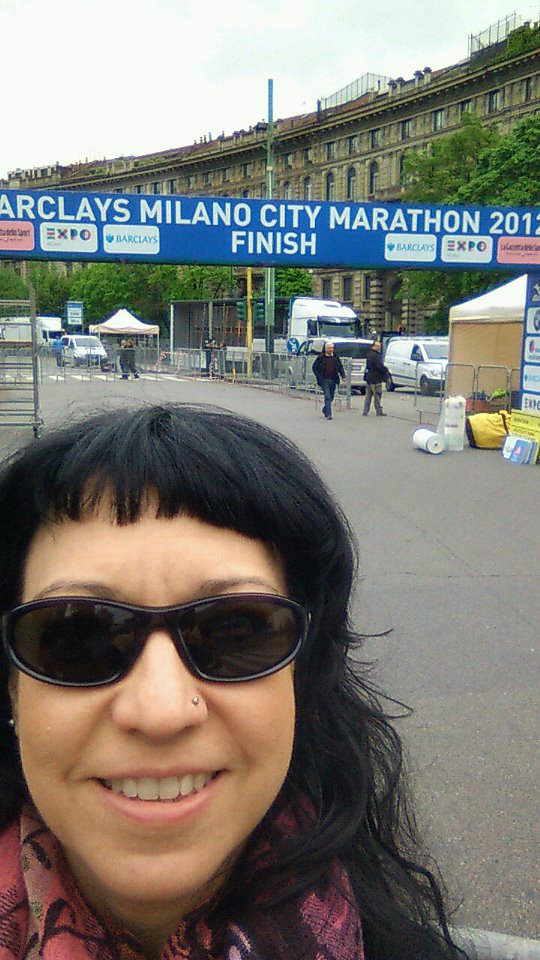 After the tour we went and had lunch, then went to the Expo to pick up our race packets and goody bags and got our T-shirts personalised (and I went and finally had a cappuccino even though it’s totally not done in the afternoon in Italy) and then at some point we all parted ways again at least for a few hours. Hanna was kind enough to not only invite us for dinner, but even made sure she had something for me to eat since she knew I was off grains (serious hospitality!!).

Quickly back at the hotel I prepped my luggage, my race gear bag and my clothes for the next day and then off to Hanna and Francesco’s for dinner!

As it had been raining off and on I was still hopeful that we would have some sunshine on the day of the race itself but sadly it wasn’t meant to be. It was already raining when I woke up at 7:30 and it just continued. I had my breakfast and did my final checks before leaving the hotel (I had to check out but leave my luggage there) and I was off to my part of the Marathon (the red bit at the end) 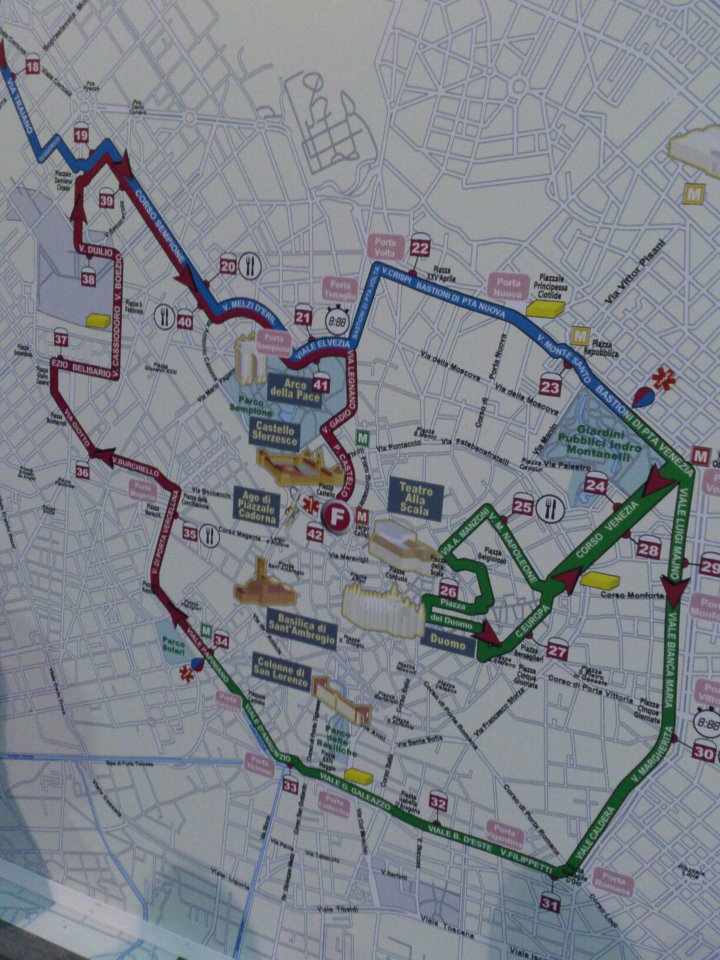 I arrived quite early for my leg but wanted to be sure I could drop off my bag on time. I spent probably the first 1.5 hours in McDonald’s of all places (I know :( ) because I just wanted to sit next to the window, have a coffee and stay warm (did you know in Italy they actually steam the milk for cappuccinos unlike in most other countries??) while I watched the first Marathoners come in around the 33K mark. At around 12:30 I walked back up to my area, waited the obligatory ages to use the loo for the last time and then I waited in my section for Hanna. I thought she would be in anywhere from 1:15pm to 1:30pm but alas she was there much later and it was absolutely bucketing down (and of course I had to use the loo again by the time she arrived but because I didn’t know where she was, I didn’t) – I felt so bad for her, she really got the worst of it.

Then suddenly, she was there! She passed off our timing chip bracelet, I started my iPod and my Garmin and off I went! The first KM marker was 34… remember I was supposed to be doing 7K??? Yeah, it was definitely going to be more than that! It rained the WHOLE time and I was soaked to the bone. I actually ran all the way through except for maybe a minute and a half when i had a little stitch in my side around 6K. In the end I came through in 1:00:58 at a smidge under 9 kilometers. 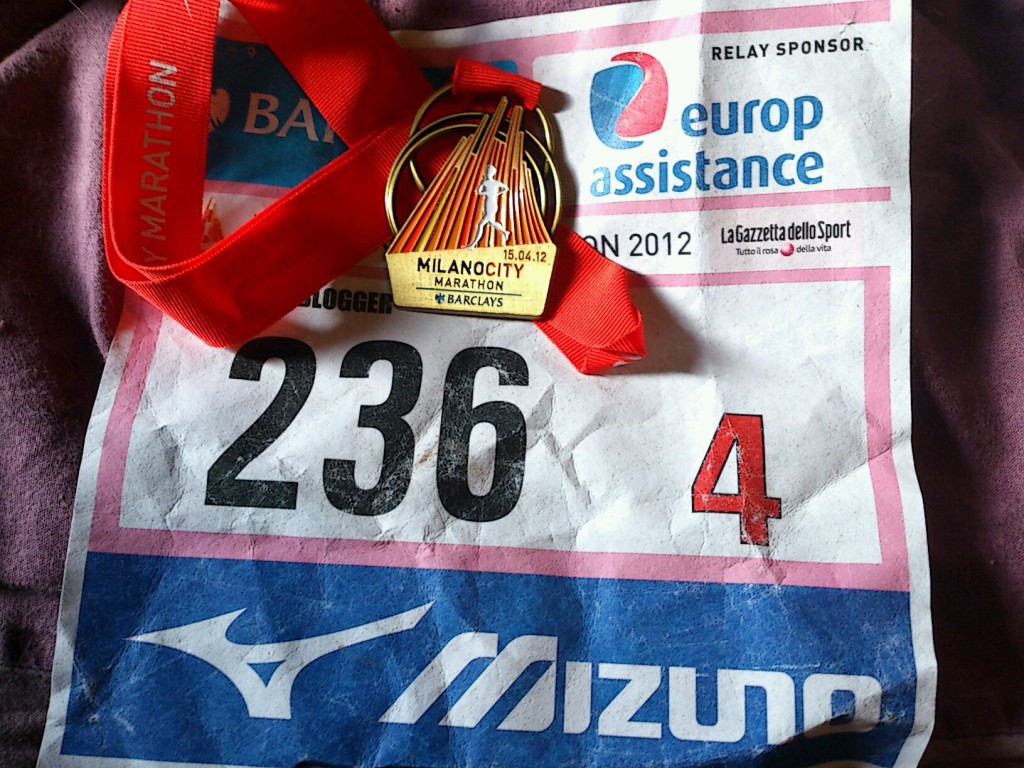 I found my bag and my teammates eventually and we took some photos (that I’m still waiting for *wink* Maya), Maya headed off with her family and Monique, Hanna and I went over to a Gelato place for coffee and, well, gelato! Francesco was still moving and smiling after completely the Marathon so he joined us as well. 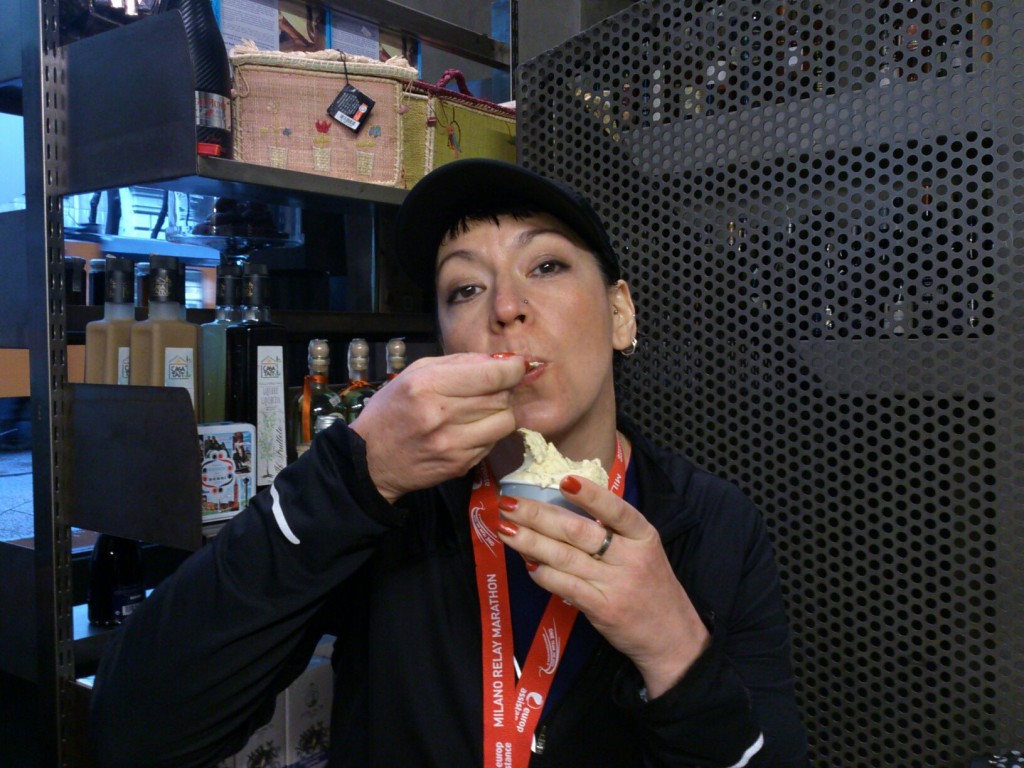 Hanna and Francesco were kind enough to let me shower at their place and afterwards I sadly had to go back to the hotel, pick up my luggage and go to the airport. My adventure was over.

Lots of things learned about this experience, mainly that I need to really do something about my need for everything to be organised and sorted out in advance. I do think I would have done a few things differently but I think all in all Monique had a pretty tough task in front of her to bring four busy people together for a Marathon relay. I’m really glad I was asked to do it, and I’m glad to have met 3 (plus one mom and one sister!) lovely ladies I wouldn’t have met otherwise. Would I run Milan again? I’m not so sure. Maybe. Maybe not. The race wasn’t bad, I found the organisation good, I thought they took quite good care of us but personally I don’t think the route is that beautiful. My leg was quite OK but only at the end did I get to see some amazing architecture and history in front of me. It’s not the Marathon Organisation’s fault of course if the route isn’t gorgeous, I just think I’d like to try a few more places like perhaps Barcelona or Paris in the future.