Lisbon Half Marathon T – 1 and Day of Recap

Usually when you are on holiday in a place you’ve never (or, ok, in my case only twice very briefly) been, you try to get in as much as possible, right? Not us. We are probably the people you don’t want to travel with. Our Motto “Relax. Take it easy” And not in the Mika way. We’re not scared or terrified. We are super chilled. 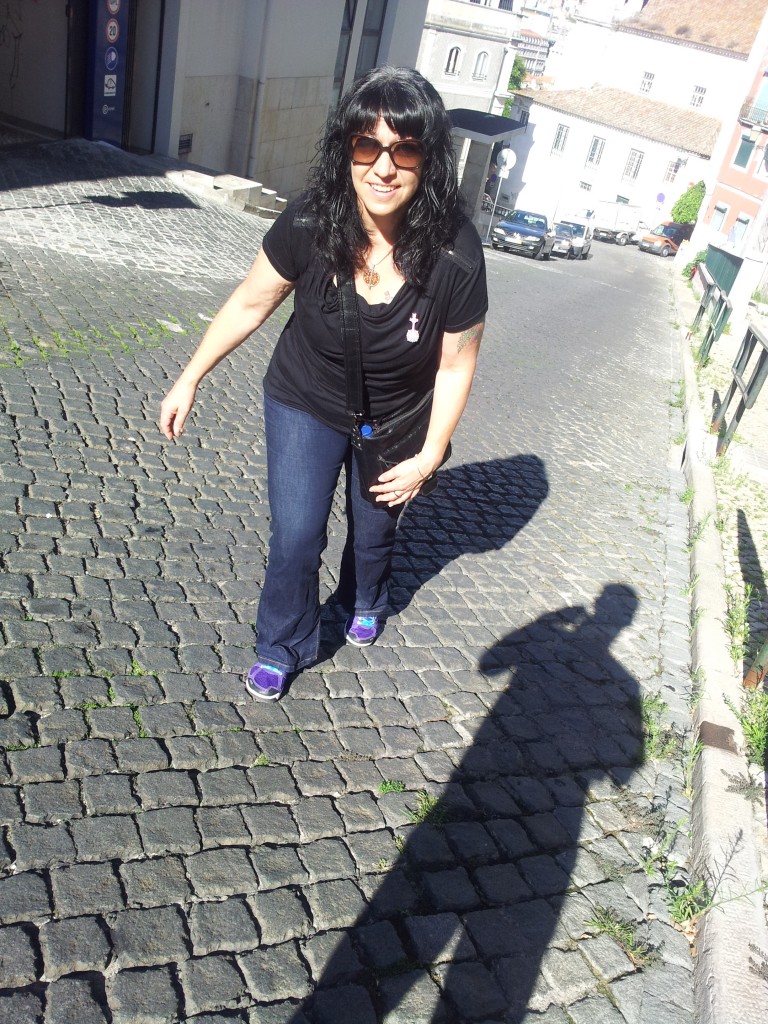 Not Running Up that Hill

It was absolutely glorious weather. GLO.RI.US. Too bad the economy is in the toilet in Portugal and I know too much about the bureaucracy there (my parents lived in the Algarve for 4 years) or I would move there in a heartbeat. It’s super cheap too. Even the expensive places are cheap.

As it was T -1 for dinner we knew we didn’t want to take risks so went to an “Italian- Portuguese” restaurant (ie a tourist place) for pasta. We actually saw several other runners there (it was obvious by the clothing) and at some point we met a Dutch guy who organises races in the Netherlands and trips in Europe for Dutch runners who want a group trip. Unbelievably, the guy lives in Arnhem! So we go all the way to Lisbon to meet a guy from the same city we live in!! Small world!

We had dinner and headed off to our apartment (climbing the hill) pretty early, got our gear all ready and I am fairly certain I was in the bed at 9:30. I wanted to make sure I was fully rested for the next day – a good race starts with a good night’s sleep!!

Woke up, pretty nervous about the race. Still felt pretty sleepy even after almost 9 hours of sleep. We wanted to be out of the door by 7:45 to be sure we were at Oriente Station by 8:30. We were fully on schedule. Up, dressed, food, coffee, bit of water and out of the door. Down the hill and to the metro station was not but a few minutes and then we noticed… the metro station entrance is closed! WHAT??? OK. Keep Calm and Go to the Next Entrance. *phew*, it was open.

We were not the only runners at the station. Once we changed and São Sebastião there were a ton of runners everywhere! We arrived at Oriente just in time and merged into a queue for the busses. (Yes I said ‘merged’. To me, this means cutting in line, to my husband it’s “normal”; sorry that we are “those” people) The shuttle bus was the only way to get to the starting line on the Vasco de Gama bridge and the ride was a good 20 -25 minutes, allllllll the way across the bridge and then back. There was that moment before we got on the bus that I thought “OMG WHAT IF THERE ARE NO TOILETS AT THE STARTING LINE???” and thinking maybe I should stand in the queues for the portaloos at Oriente. However, there was nothing to worry about, plenty of loos on the bridge. By the time we arrived it was 9:15 and the walk to the loos on “our” side (the way was blocked off by fences – Half Marathoners on the right, fun runners on the left) about 10 minutes. We waited in the queue finally for the loos, 20 minutes… the sun was already blazing… totally wishing I’d had more water… 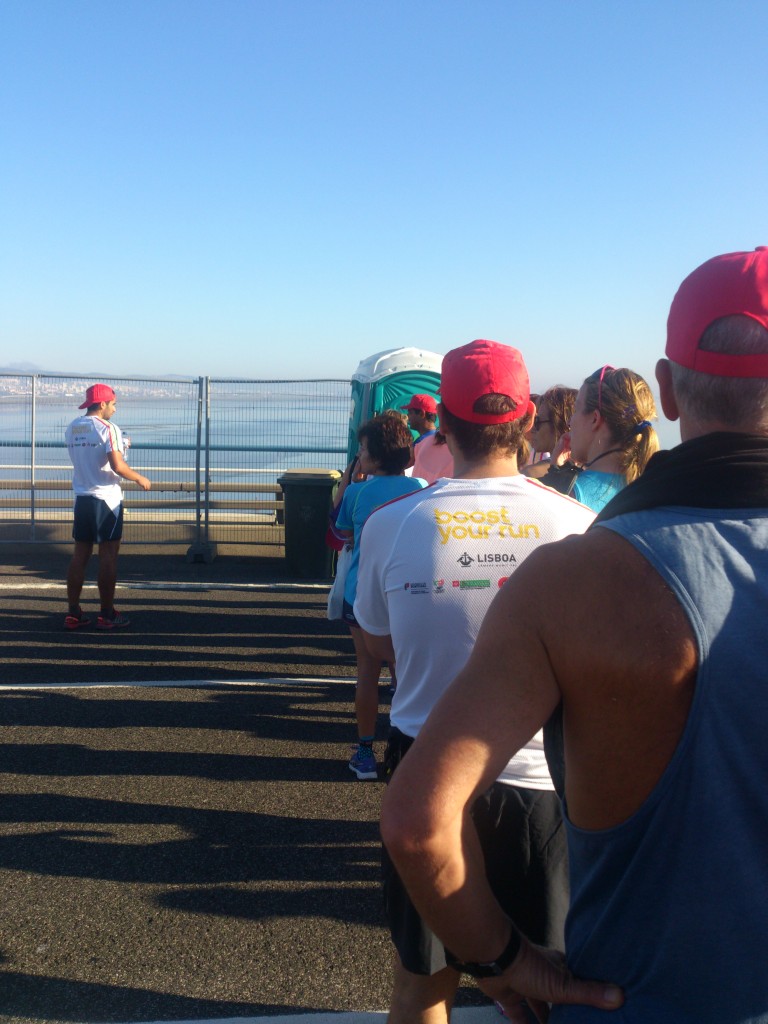 And… the wait for the loo is a long one… 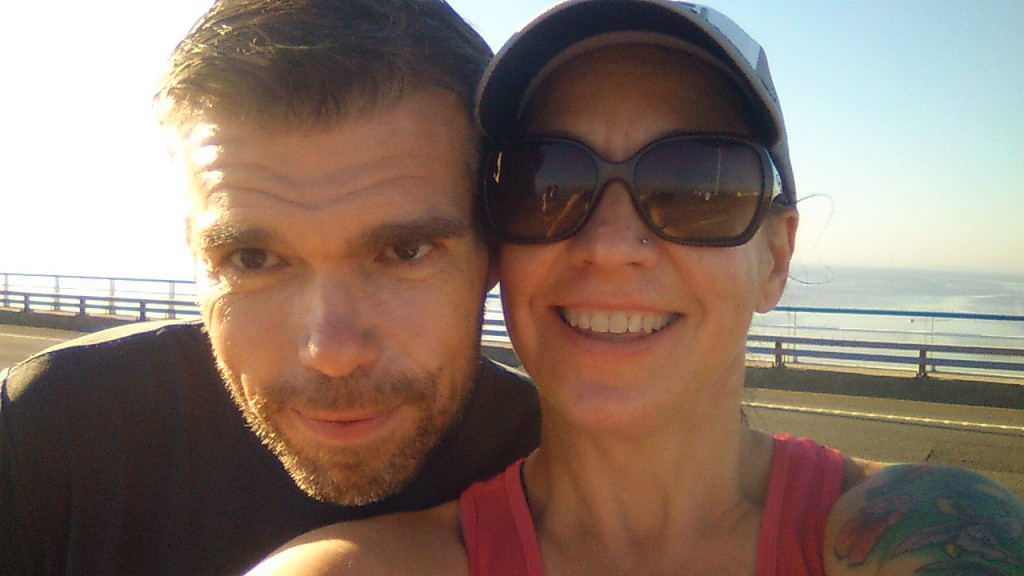 On the bridge before the start 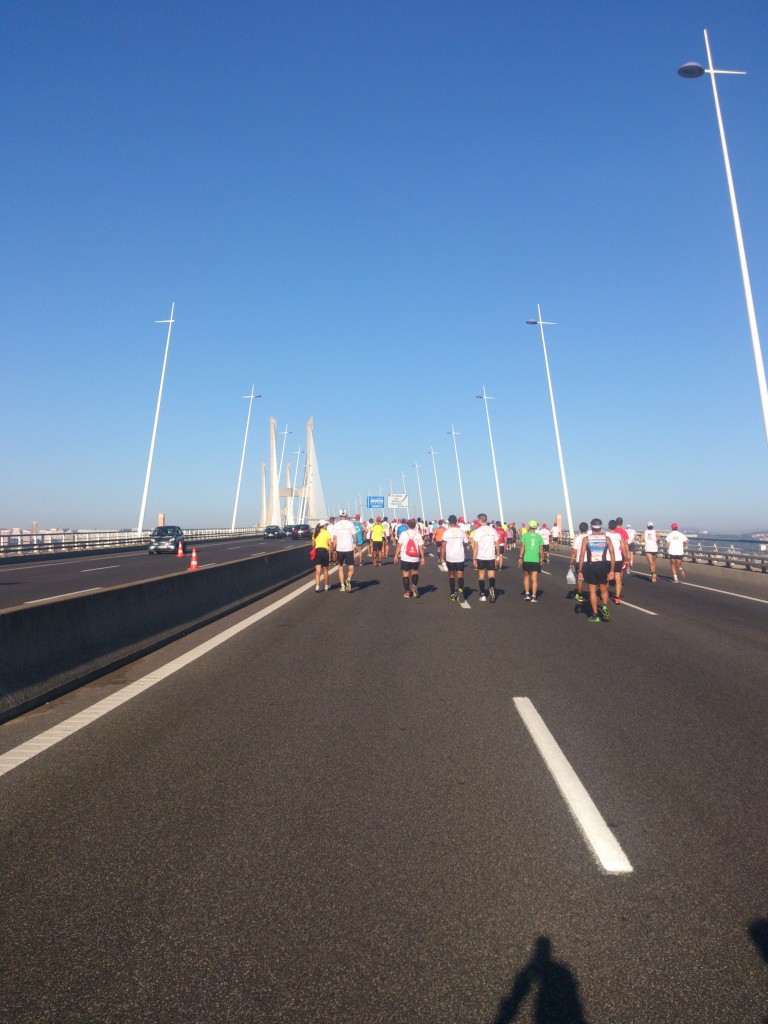 the long walk to the start 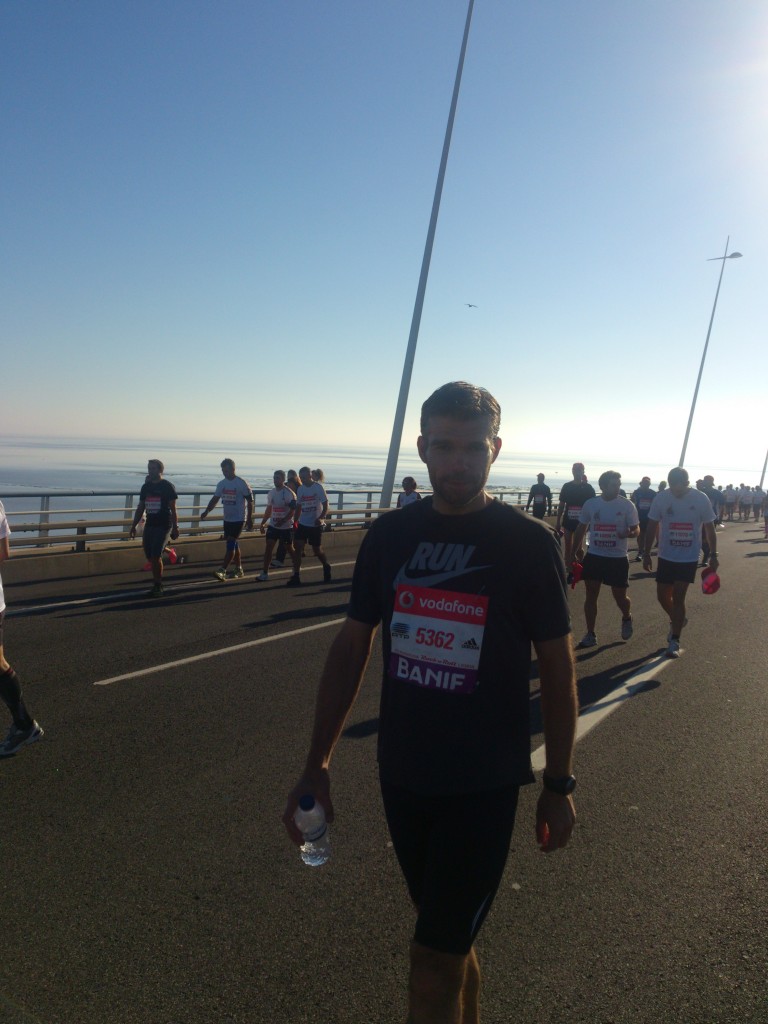 (Sidenote: I love when this song comes on my playlist, even though I always get tears in my eyes; I always think of my friend Michael, who sadly died almost 5 years ago – I’m running this song for you, man and I love you and miss you every day)

All along the course there were plenty of water stations, live music, and I think about 12KM there was powerade drinks, at 14 there was fruit. I took advantage of every station. I must have had 2 litres of water to drink along the course and was still sweating like a mofo! I have to say this was a TOUGH race, well organised, but TOUGH for me because of the heat. Also, not the most beautiful course, but I loved starting on the bridge and the music was pretty cool along the way. At the end we got our medal, a goody bag and a free ice cream. Hubs came in at 1:53 – AWESOME for him, HIS FIRST HALF!!! He was waiting for me at our designated meeting point and afterwards we just hung out, got some grub, drank some beers and rested in the shade of the park near the water listening to live music. 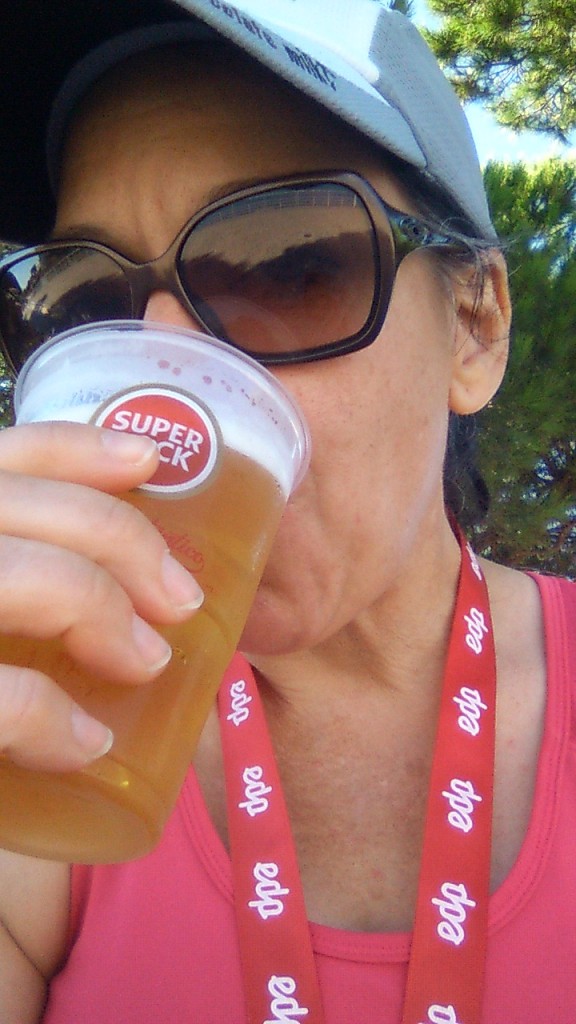 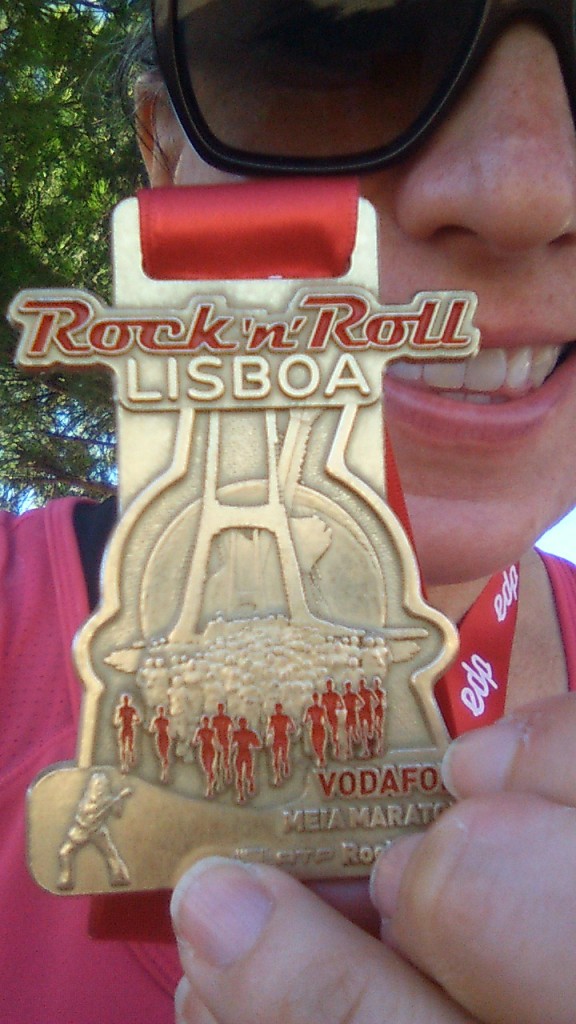 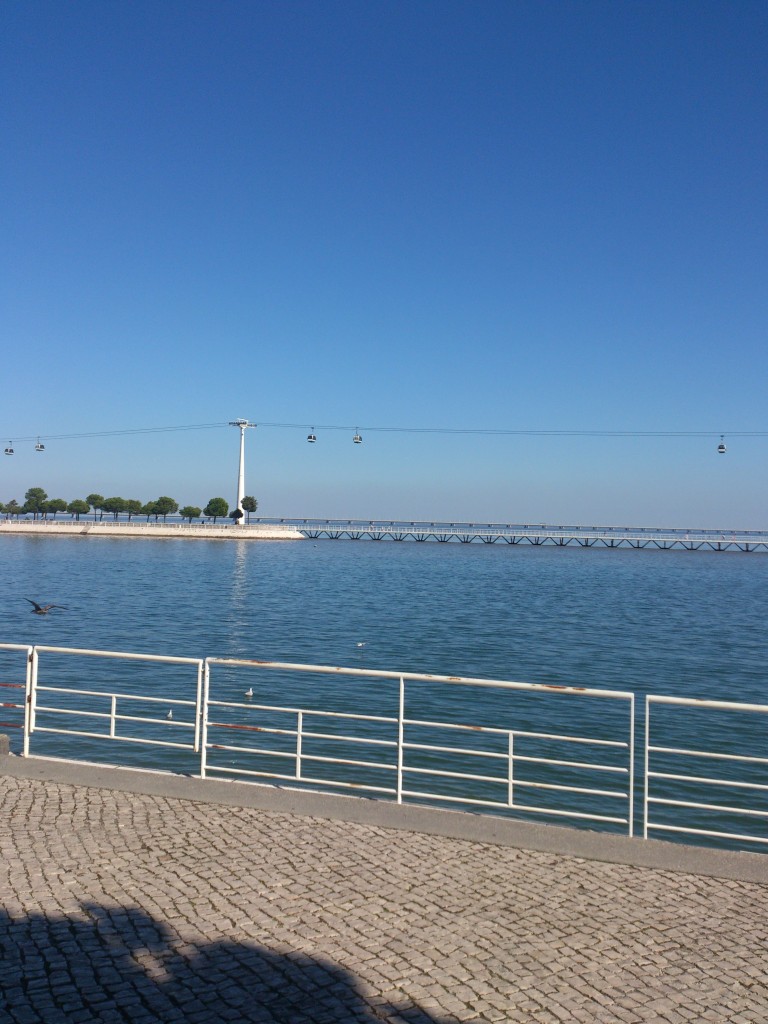 What a great view after the race complete with beer and live music.

Amazing day, amazing race, nice and relaxed afterwards. Once we got back to our apartment we finally could shower off all of the heat and sweat and got changed to go and have a relaxed dinner. We were both fairly destroyed physically once we finally put our heads to the pillows and got some sleep.

Have you ever done a Rock ‘n Roll Half or Full Marathon? If not, would you like to?