As you all know, this year I was selected to be one of the 100 rock’n’bloggers for the Rock ‘n Roll Marathon Series. As a rock’n’blogger I receive free entry to any and all RnR races I choose this year. There is no other compensation. All opinions are my own and my experience is purely in my own words. Just so ya know :)

Just a couple weeks after returning from Chicago, I was off again, this time to The Fair City of Dublin! I was lucky to have travel and running companions with me to add to the fun. We met up with Babette at the airport and started the weekend! Flight was good and we arrived on time to a gorgeous sunny day! M and I went for hotel check-in and then straight to the Expo. Since Babette was staying somewhere else we met up with her at the Expo a bit later. She was also with some ex-colleagues who were running as well.

The expo was small but really fun! We picked up my race packet and got the swag, walked around, ate cupcakes, checked out the stalls and M even got a really amazing massager for her back and neck. Once we were all done at the expo we headed back and decided to have a drink and dinner finally at (probably a very touristy) Irish (hahaha as if they aren’t Irish in Ireland) pub – SO MUCH FUN, YOU GUYS!! Irish music, Irish dancing and we were sitting RIGHT ON THE STAGE. Really enjoyed that, loads. 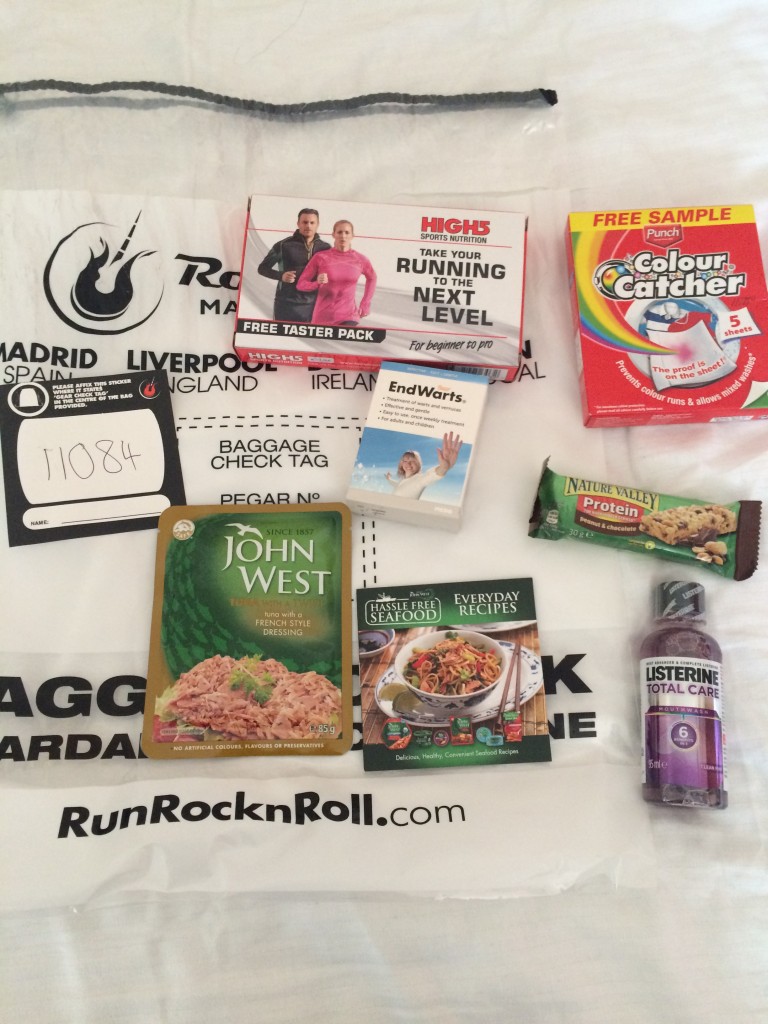 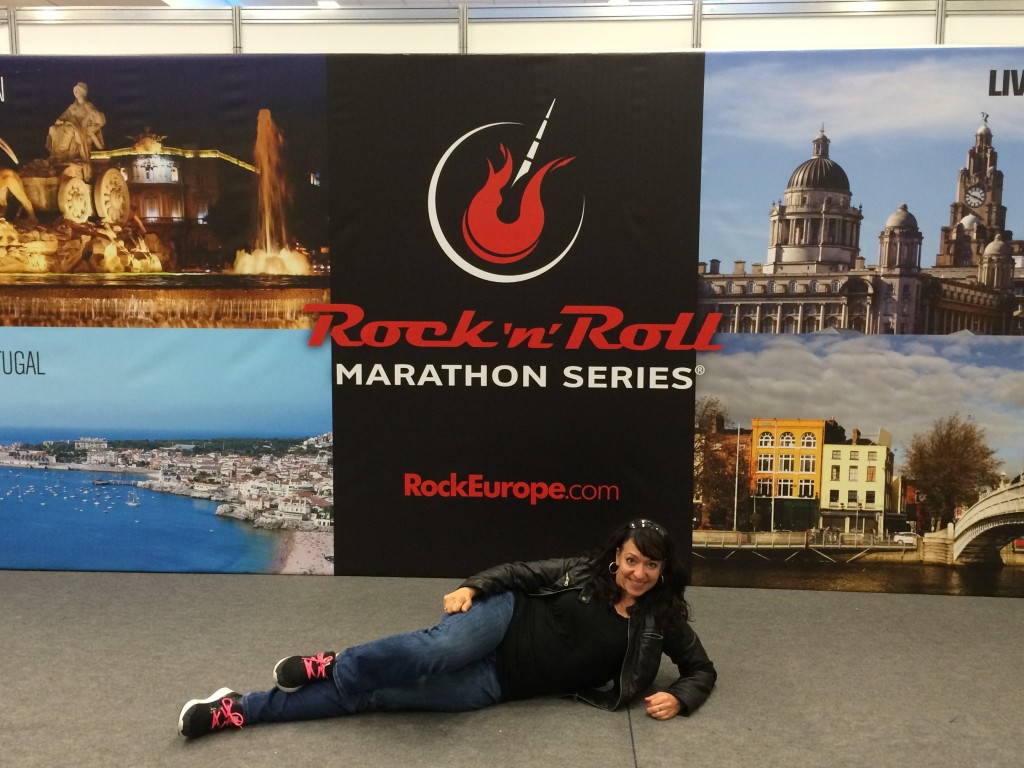 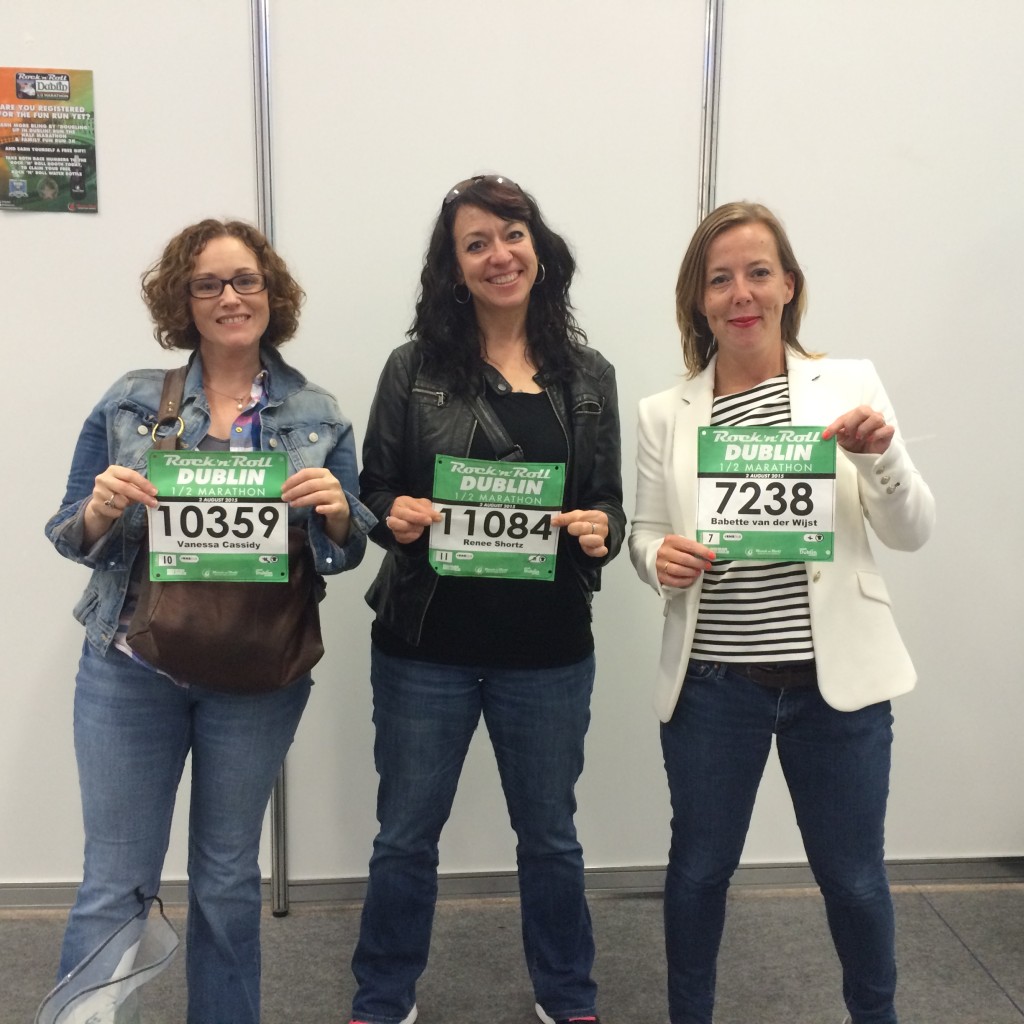 The Girls Ready to Rock 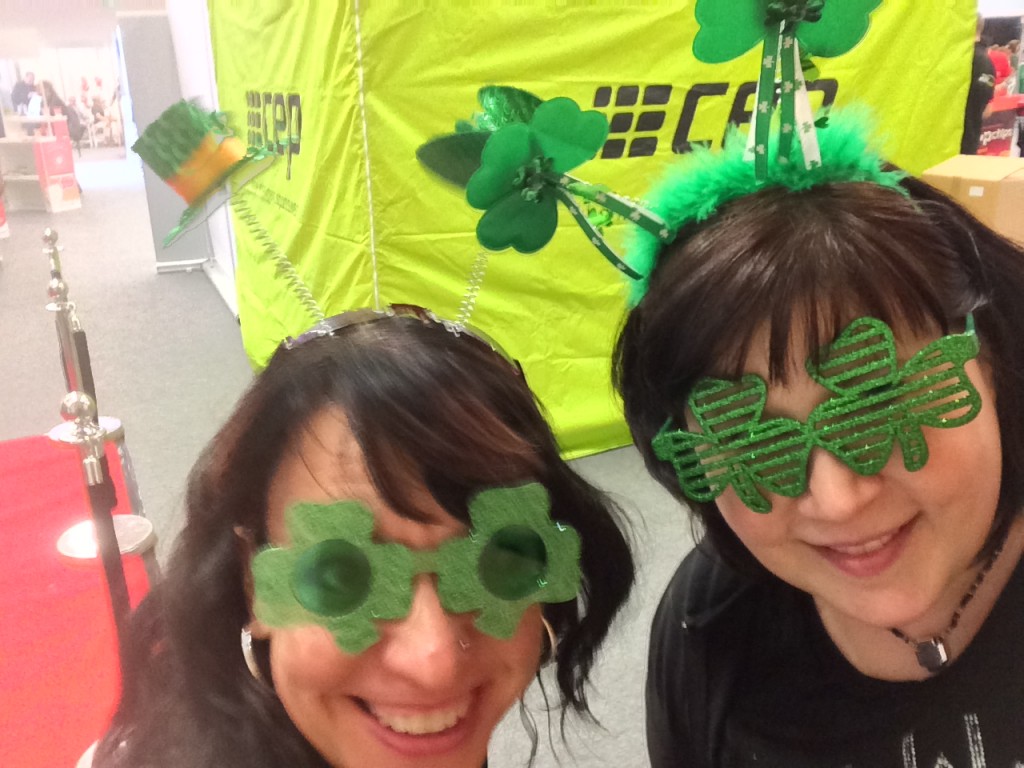 So much fun at the expo! 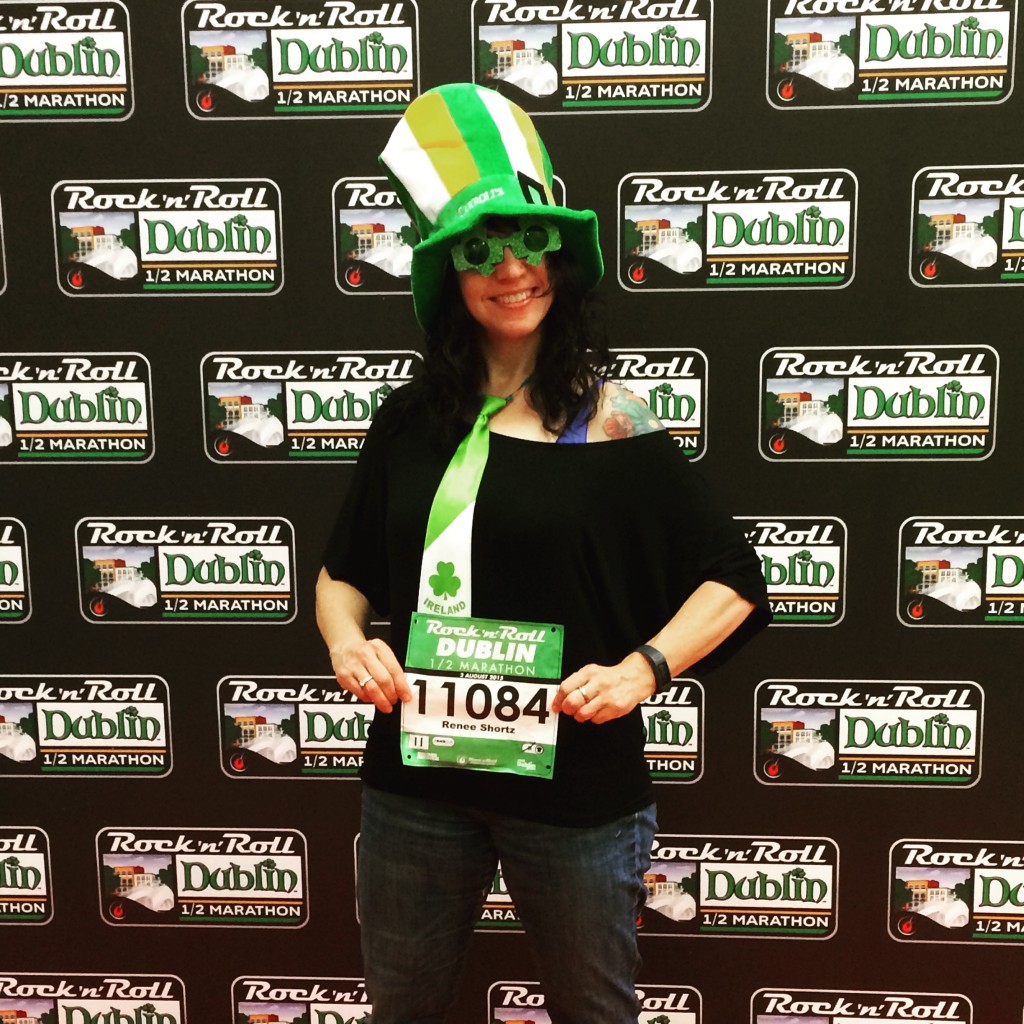 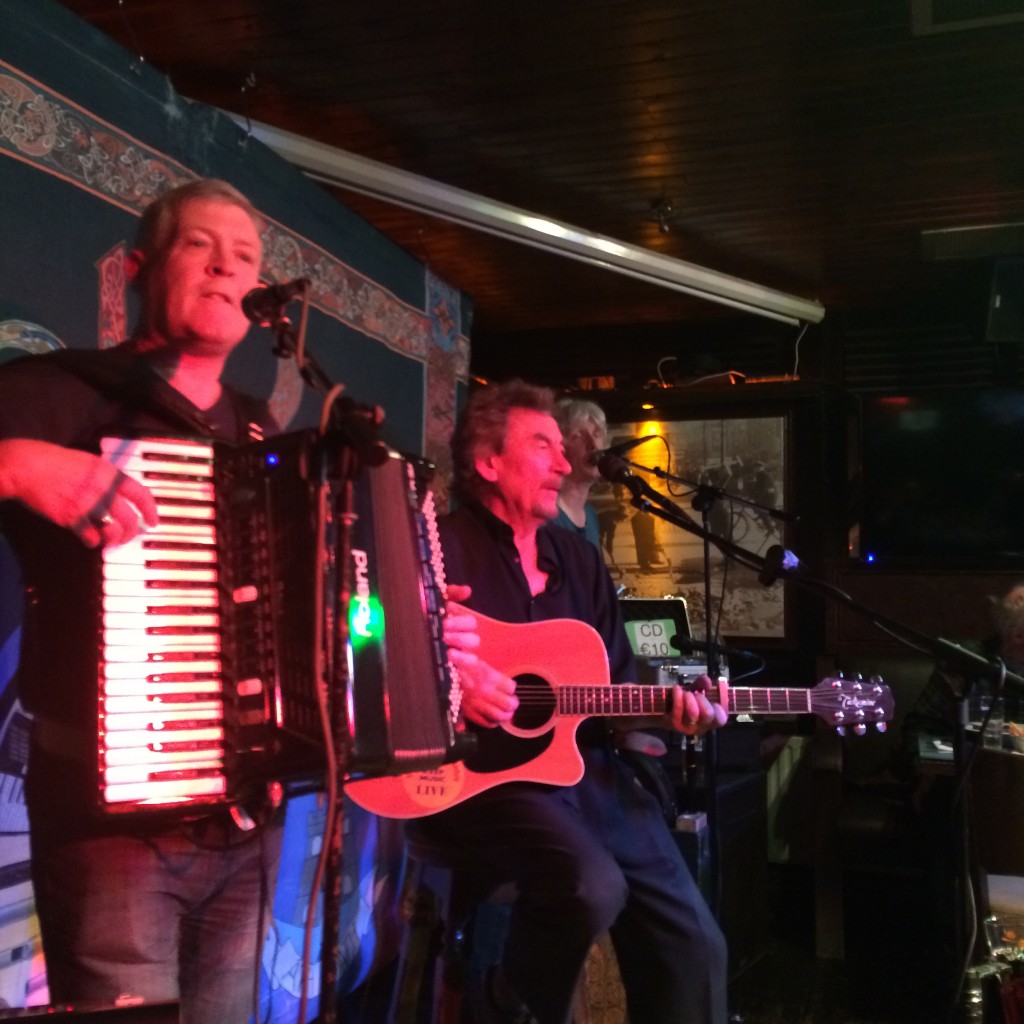 Irish Music For the Win! 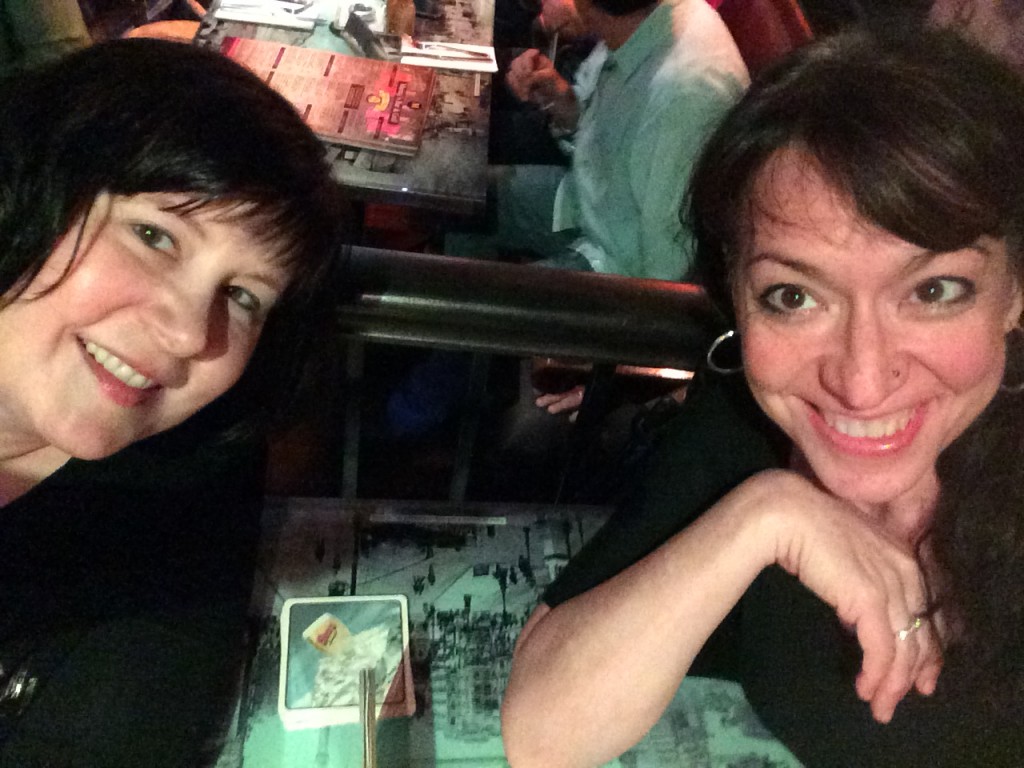 Girls Friday Night out in Dublin!

Saturday morning we were up and breakfasted (a new word haha!) and then headed out on a city bike tour. Since I want to keep that a bit separate, you can read about it here. In a word though – AMAZING! We were so lucky with the weather and seeing a city by bike is SO recommended. The tour we took was See Dublin by Bike.

After our tour, M and I had something to eat (one downside to the tour – no food or drink); I was ravenous and also needed coffee! It was good to have a bit of a nosh! Afterwards we walked around a bit, went to the supermarket to arrange some breakfast for me for the next morning and then had a bit of a rest. Later on we met up with Babette for PASTA – what else!

Once we had dinner, we then went for a drink afterwards (since it was early and we WERE in Dublin… gotta hit the pub!) and were hoping to have the same music and dancing situation but sadly it was not the same as the night before. So Babette went to her hostel and M and I headed back for the hotel. I had to be up early so I wanted to be fully prepared.

I got flat pinky ready, had all my gear out, my breakfast ready to be prepped (instant oatmeal – I wouldn’t make breakfast because I had to leave before it started) and M and I turned in for an early night to dreamland. 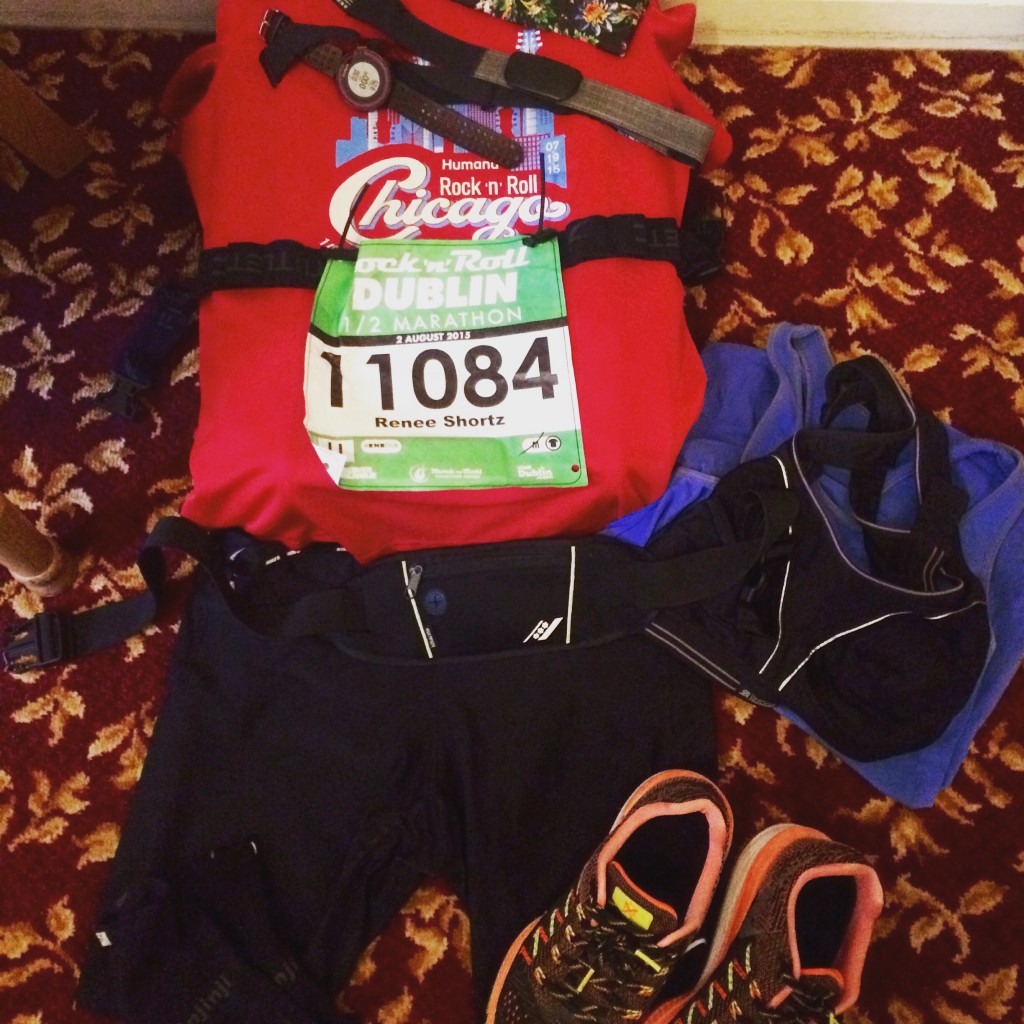 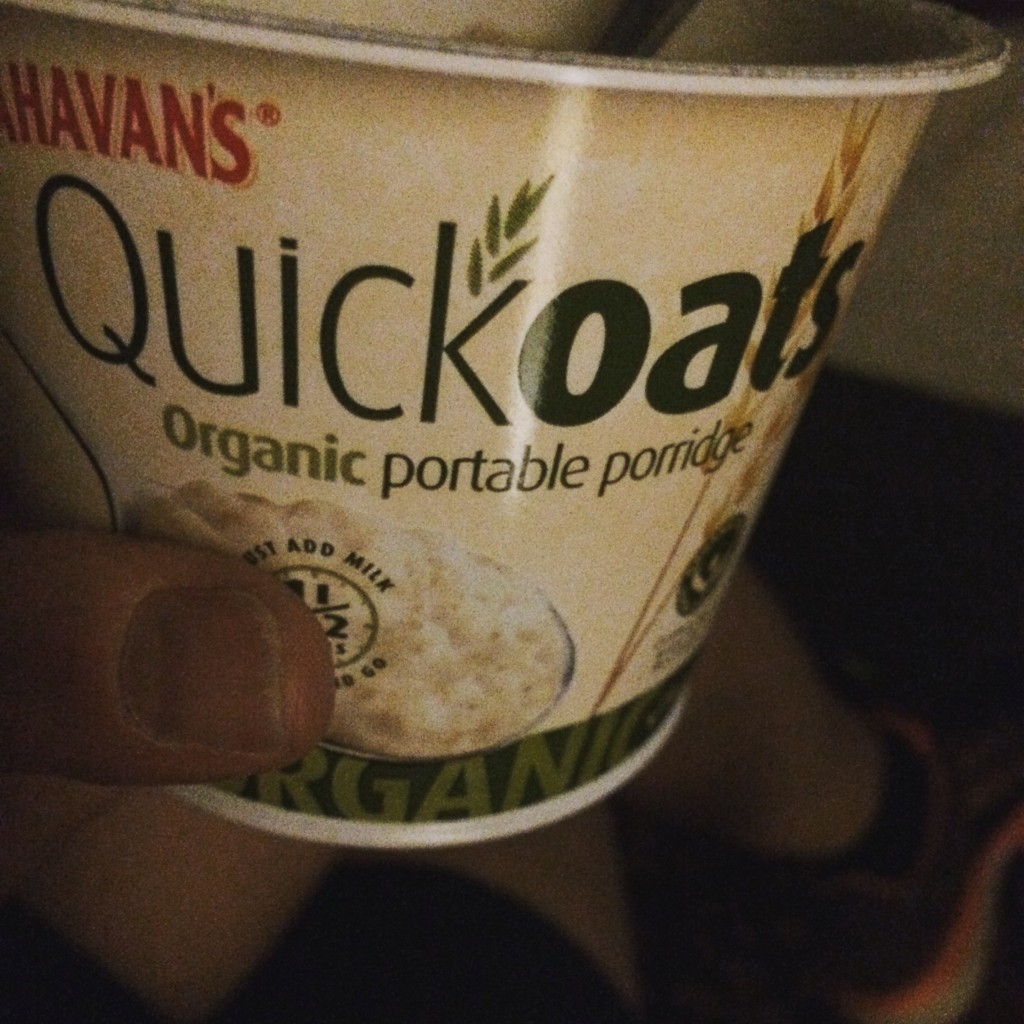 I had a good night’s rest and woke up easily with my alarm, tried to be as quiet as possible so as to not disturb M. I got ready and ate my breakfast pretty much in utter silence! I was nervous because I hadn’t really been feeling that well and I was certain it would be pissing down with rain the whole day (which is fine for oxygen content but not so great when you have a cold). I left the hotel right on time and meet up with my friend Sue (we met in Paris!), her husband Graham (also met in Paris) and a couple of their running friends. It was SO awesome to see them again. And of course I was SO happy to be meeting up with Babette as well! We waited about 10 minutes on a street corner (ha!) and there she was in the tram, waving at me! 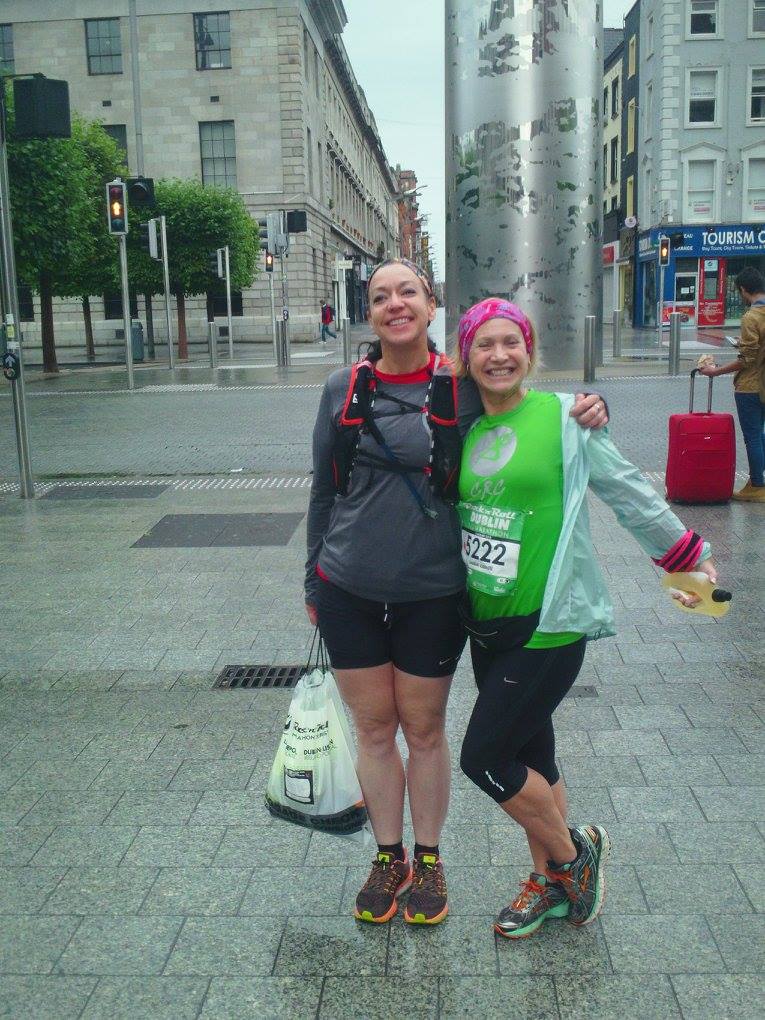 So grateful to Graham who took these photos of us! I found out the day before that Sue and Graham were staying just a stone’s throw from us – so easy to meet and go to the race together! 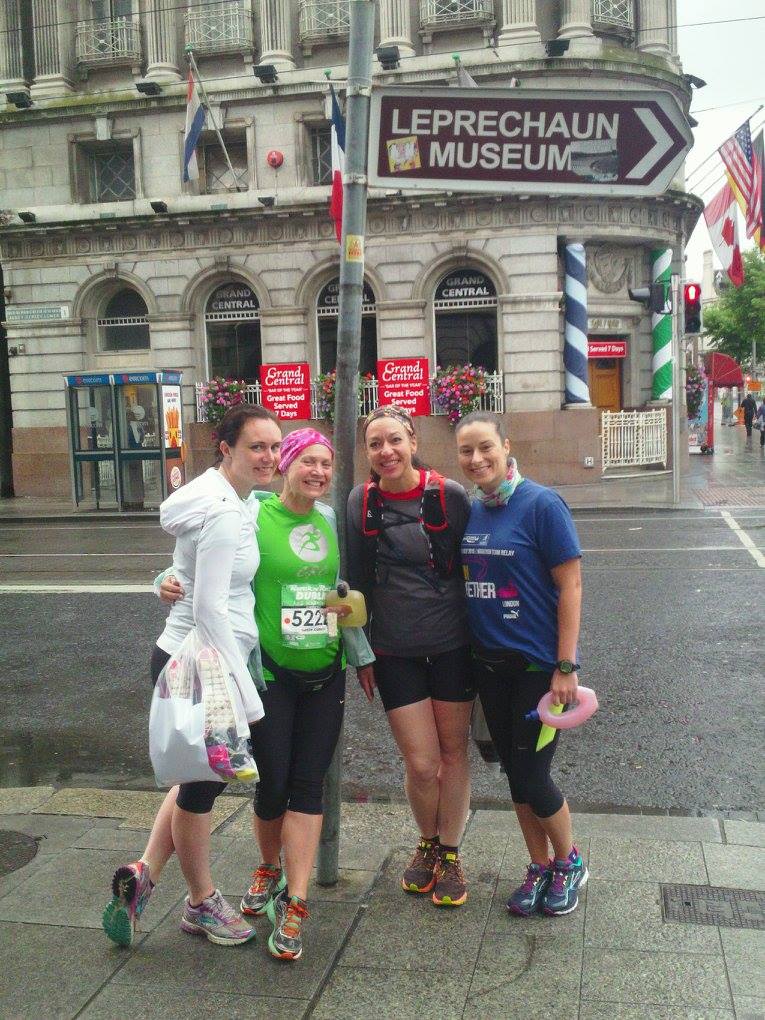 We then walked to the start, which wasn’t far at all, maybe a kilometer in total. We did the usual routine: walk around confused, chat with each other nervously, selfie poses, wait in the queue for the loos, drop off the stuff at baggage drop, find starting corral. Babette had a faster corral start than I did, but I did eventually find Lois and Stephen (also met in Paris!) and in fact noticed in a corral selfie later that Lois was even in my corral! 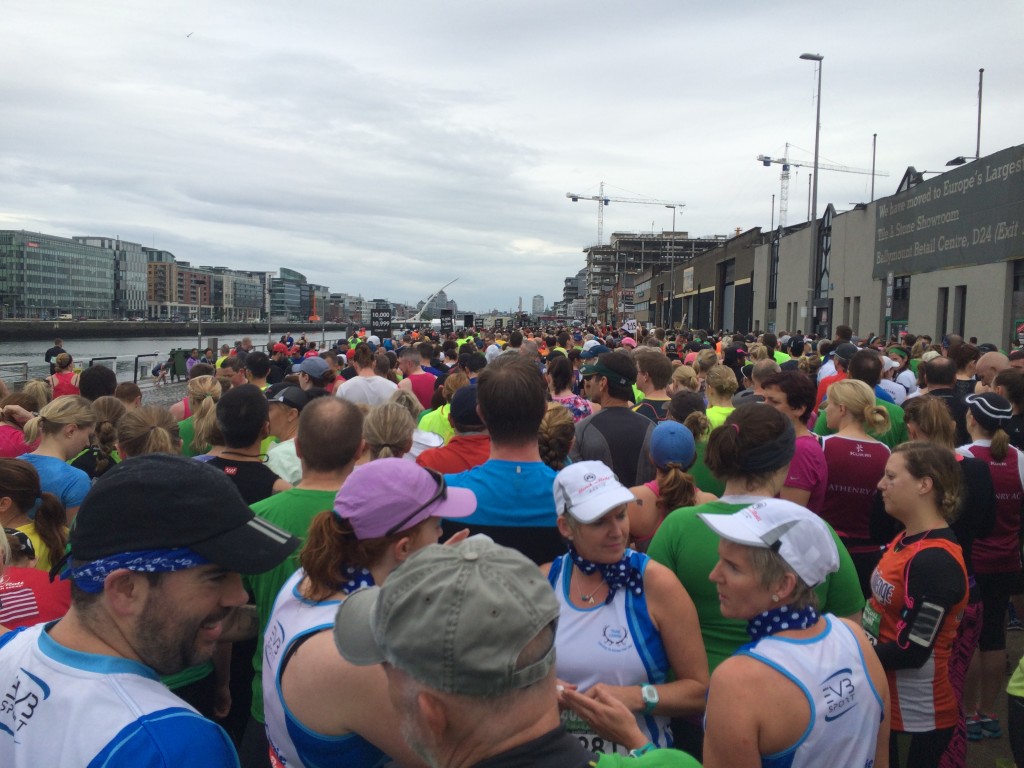 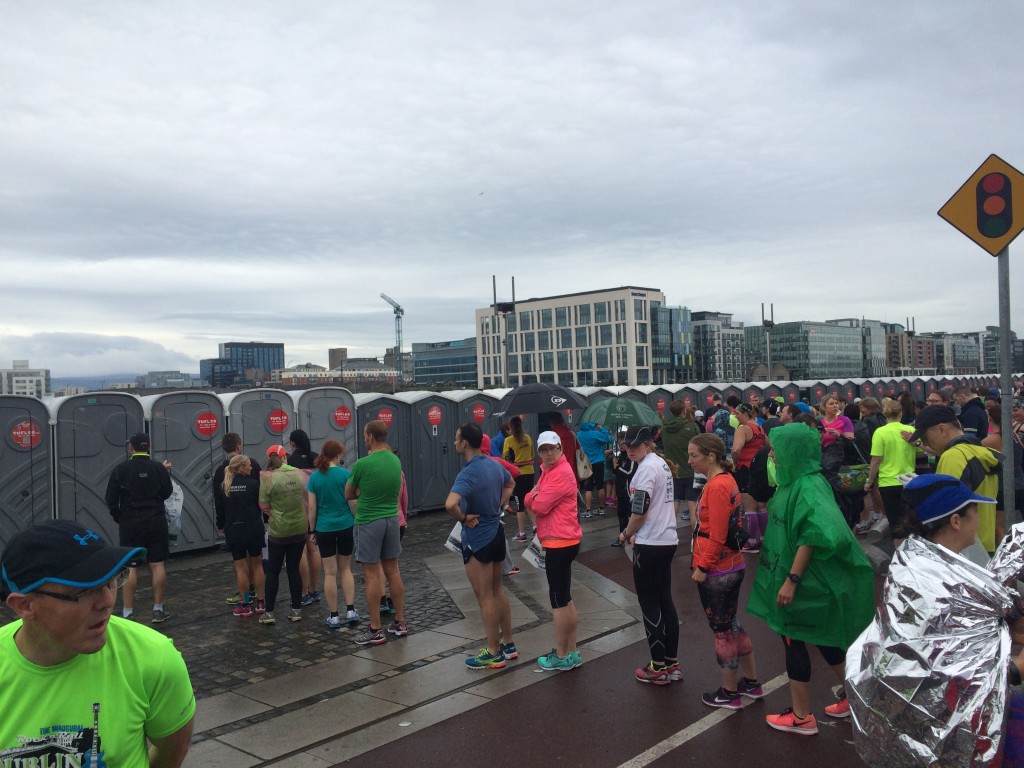 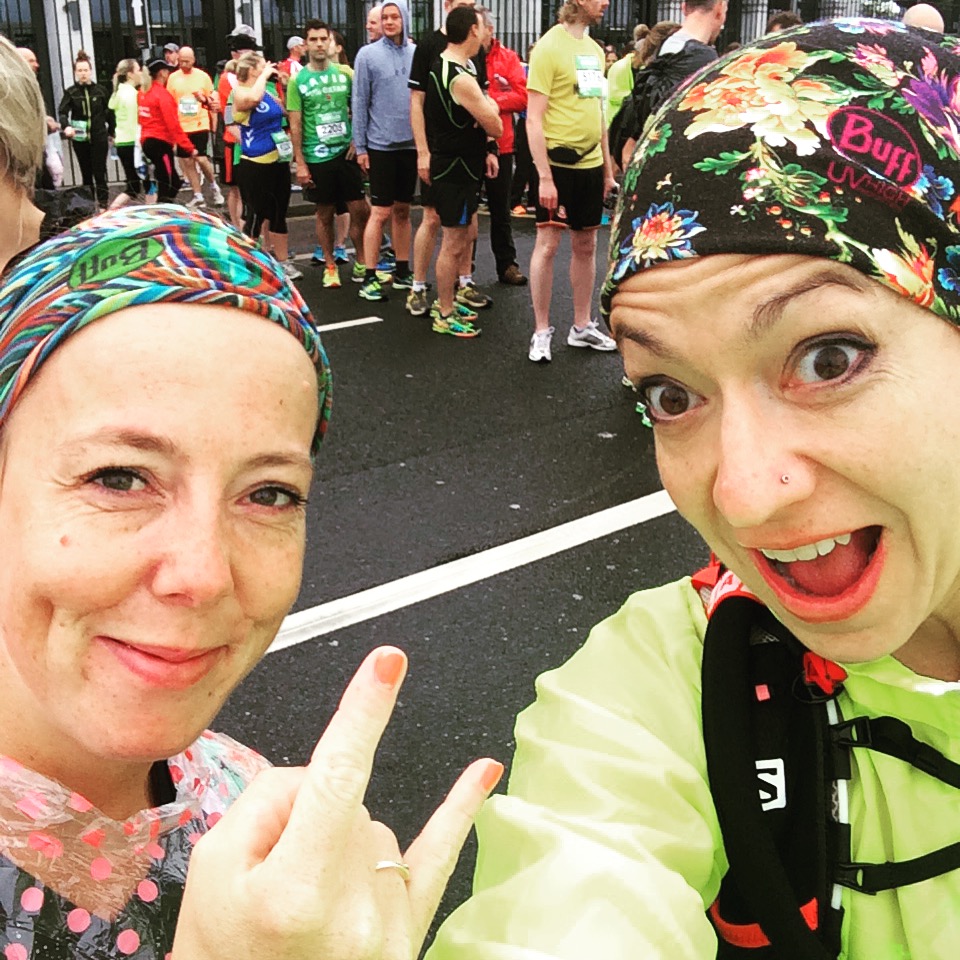 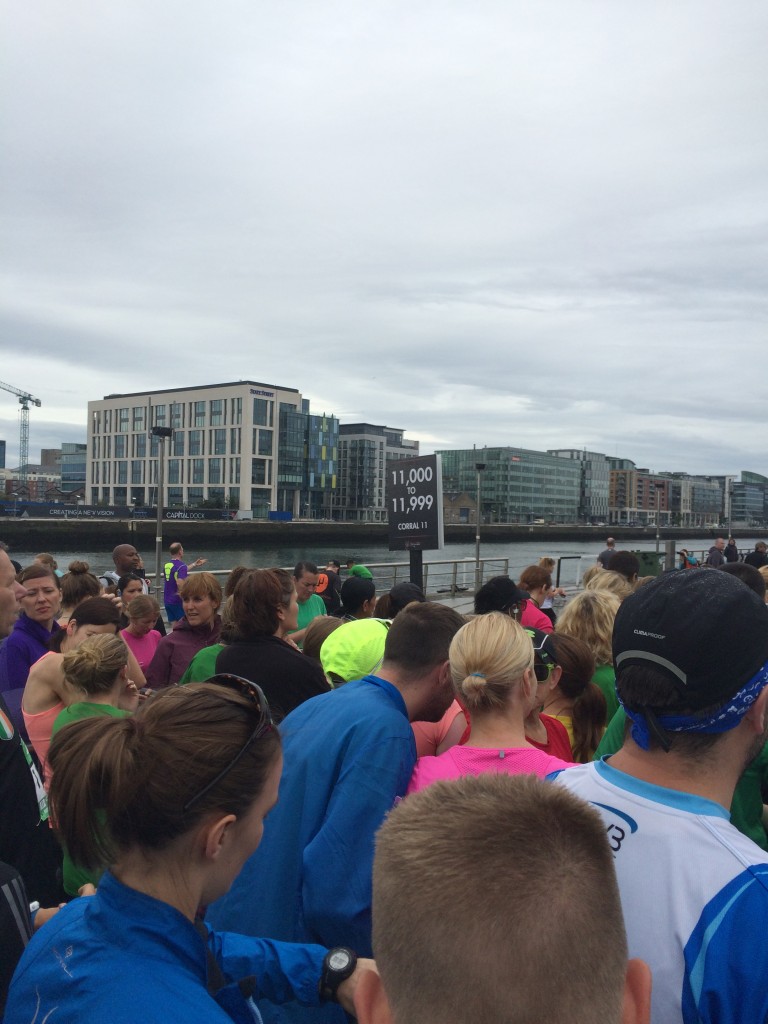 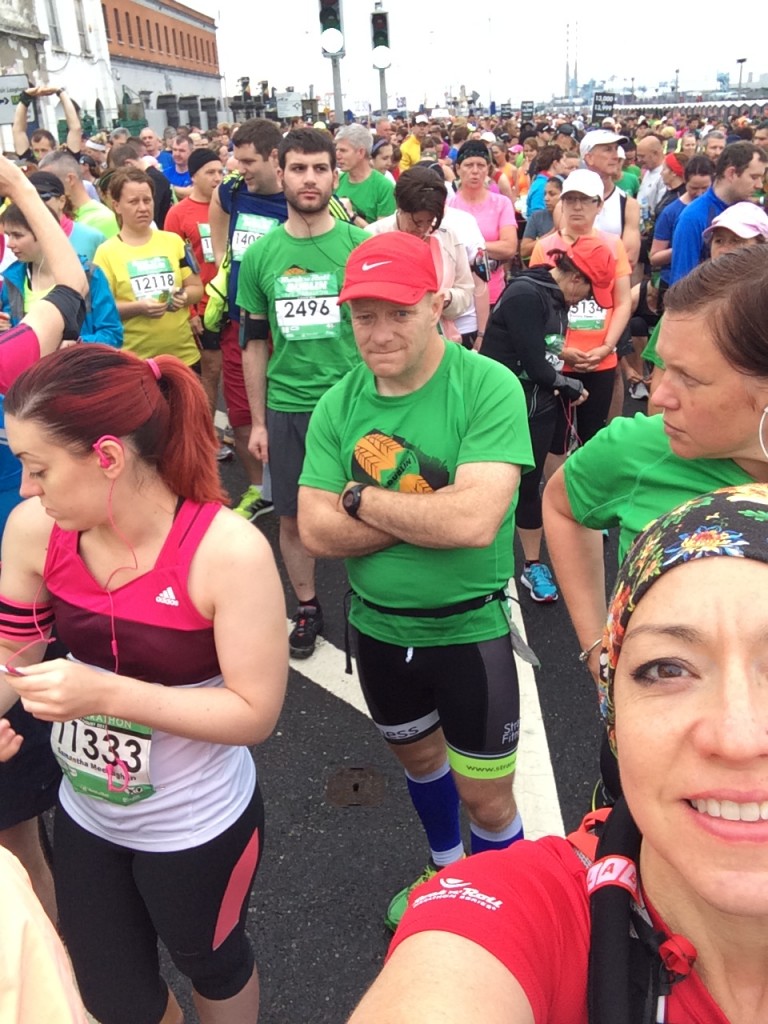 It was raining but not hard and it wasn’t very cold. Eventually it was time to start!

I absolutely LOVED the first Half of the Half! It was just amazing to run through Dublin and it felt pretty good, not too crowded or with pushy runners all over the place. We went up a couple of hills but they weren’t as dreadful as I had imagined. Many places I had seen the day before because of the bike tour! So, bike tour, again, for the win!

I started to struggle a bit around 14 or 15K. My breathing was off, it was humid as well I was feeling the fact that I’d been ill and probably needed more recovery and rest from all of the jet-setting I’d been doing. By the time we reached Phoenix Park I was struggling. However, I always do my best to maintain a positive attitude and I try not to let too much negativity in my head space. A couple of things: I loved the music! I’m so glad I’ve committed to running without music during RnR races so I can really appreciate what the race organisers have come up with! Also, RnR always and I mean ALWAYS does 100% on taking care of the runners during the race. Plenty of loos (didn’t need them this time) and fully stocked water and sport drink stations. I will continue to run RnR races even when I’m not a rock’nblogger because of the total package. Anyway! I loved running in the park. And by the way, HUGE park! I even stopped near the US Ambassador’s house for a selfie. Because, you know, I’m patriotic and stuff. 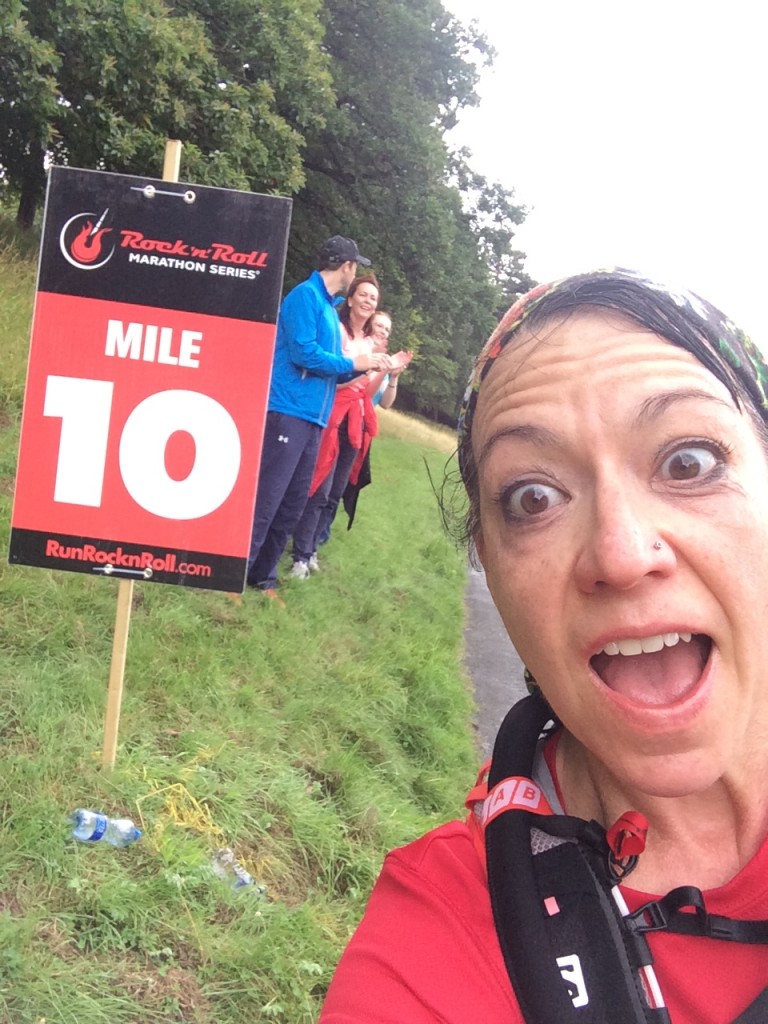 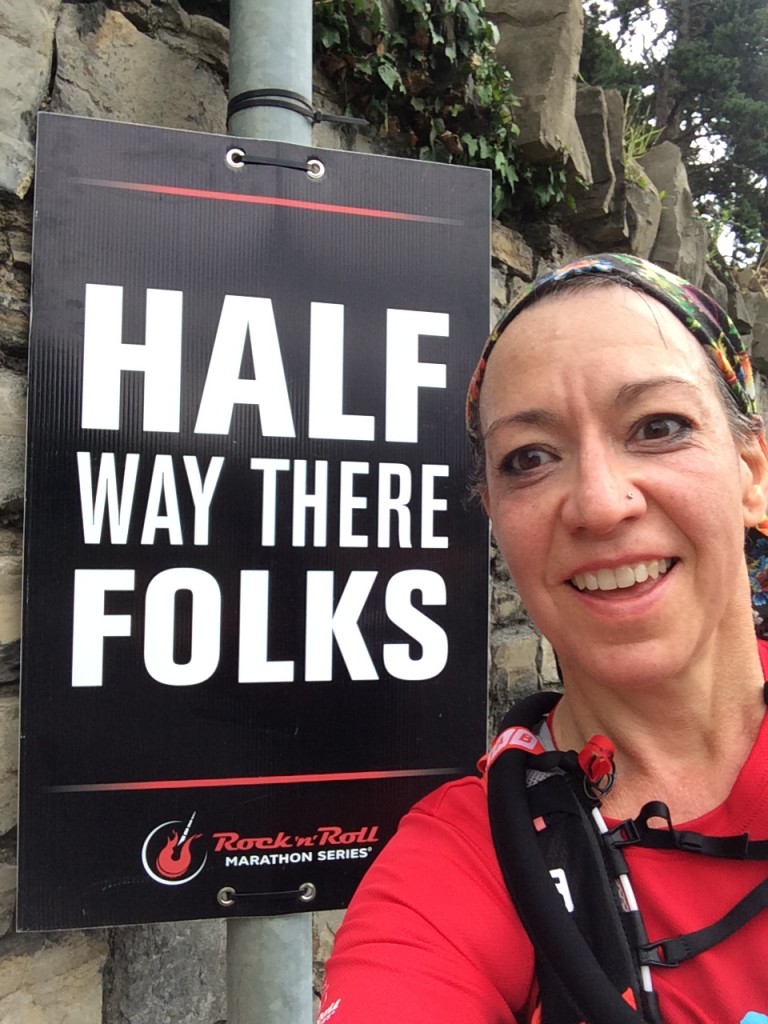 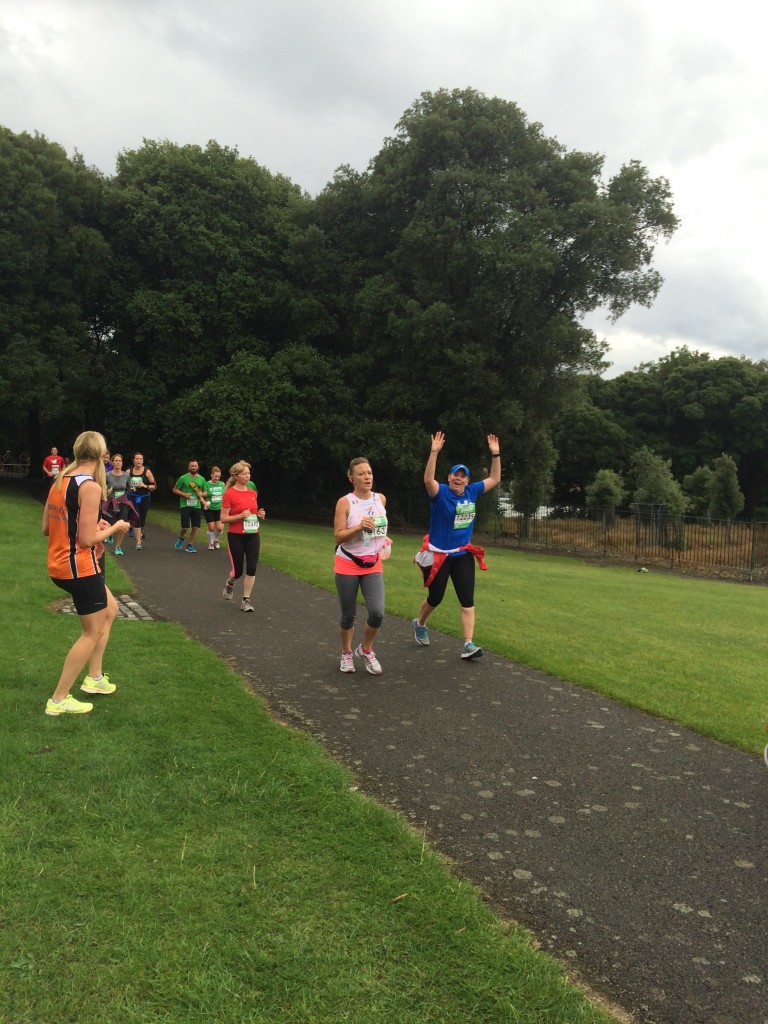 Catching a few other runners in Phoenix Park 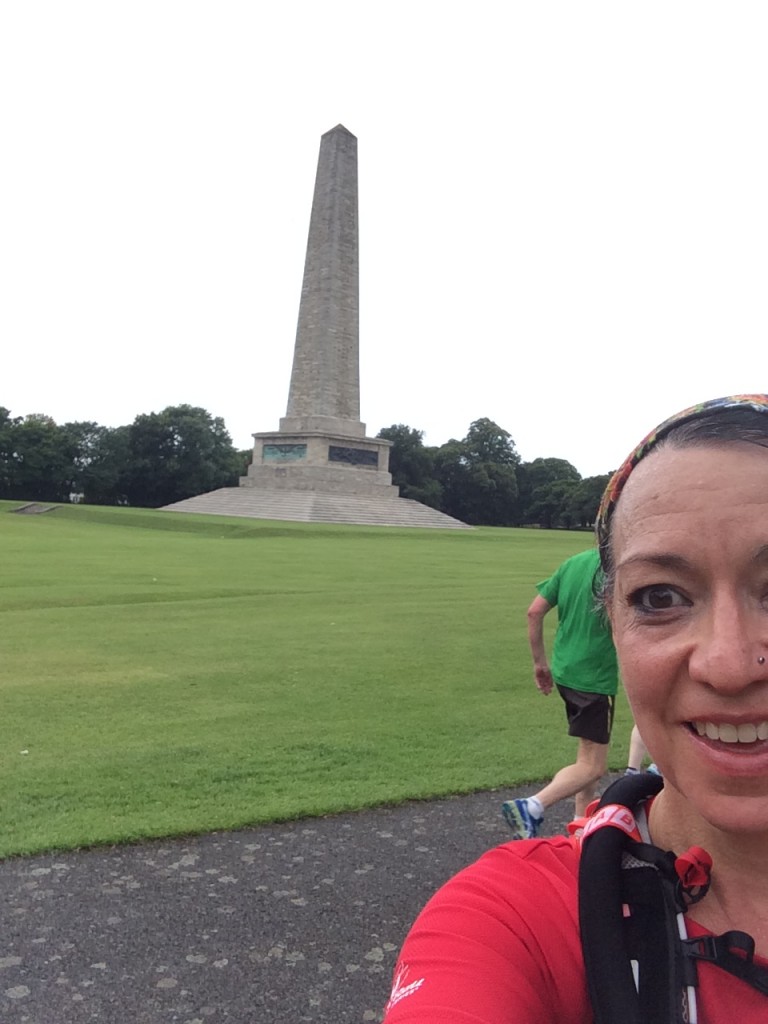 Selfie with the Wellington Monument 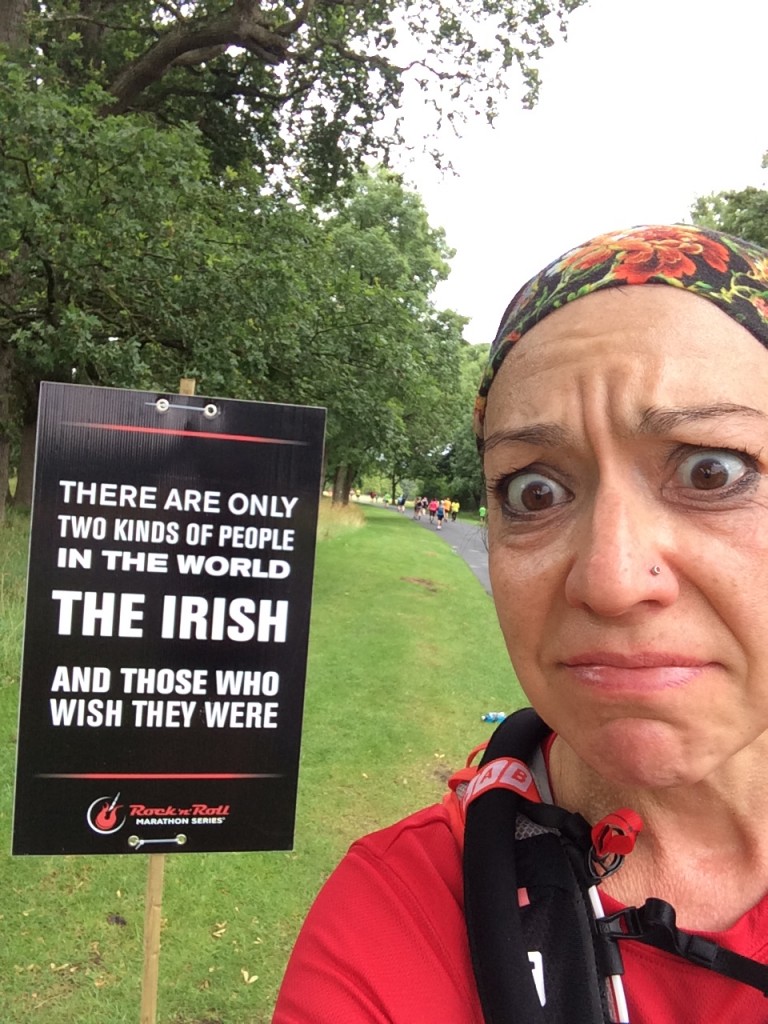 Yeah. Not so sure. 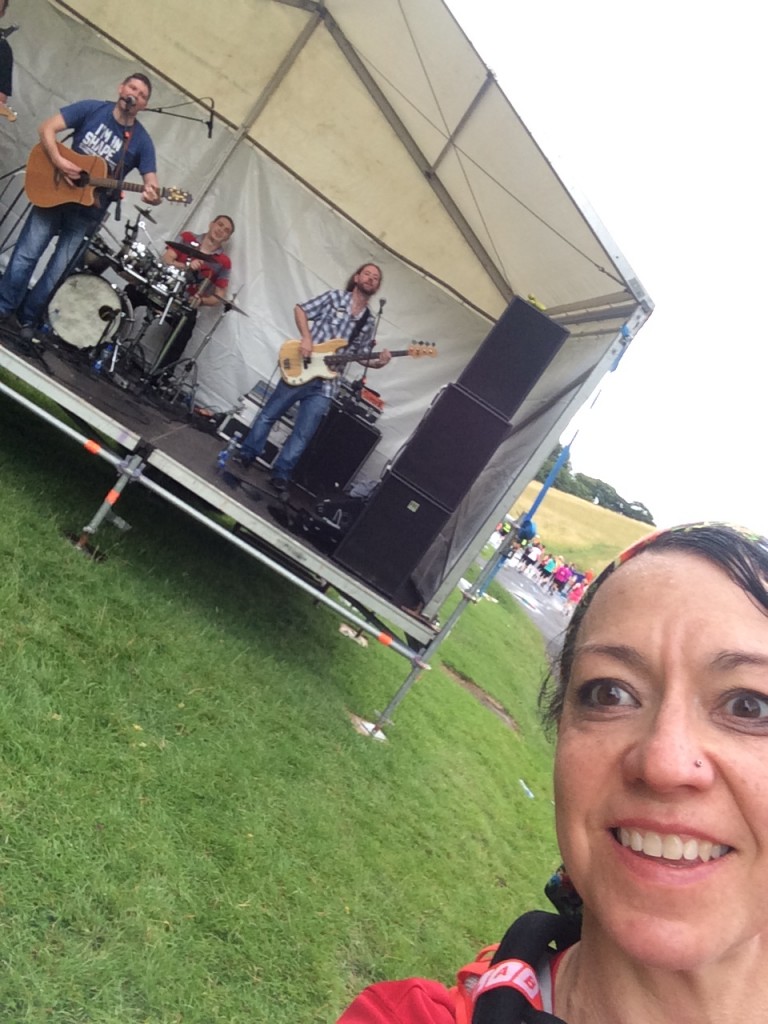 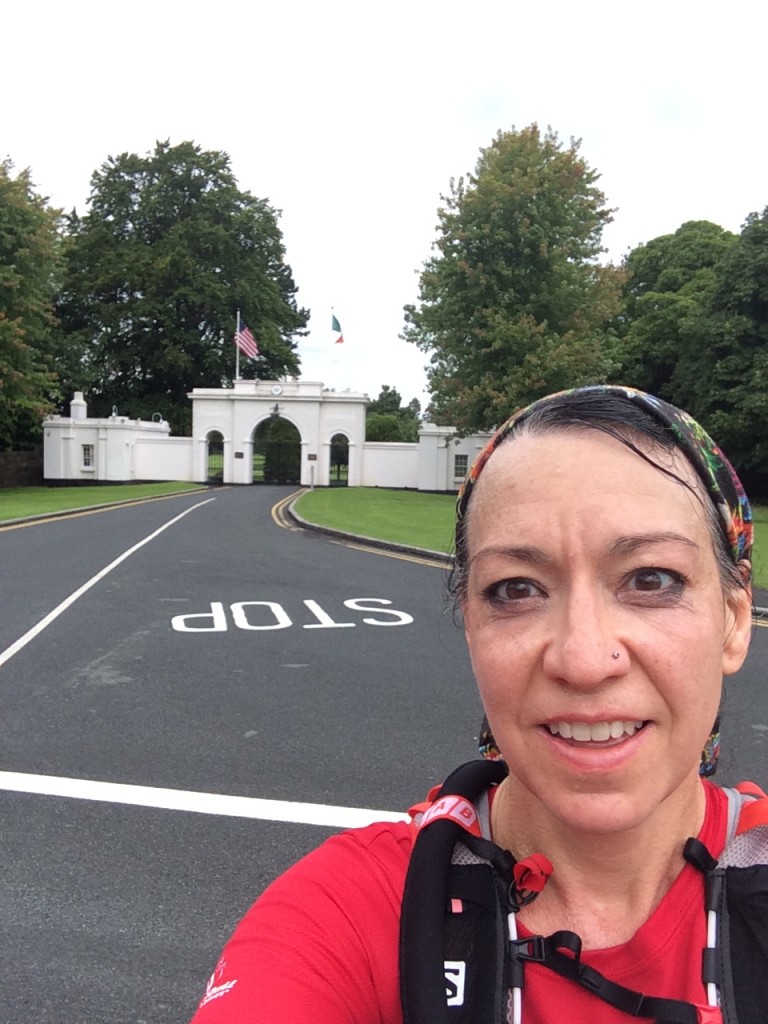 In front of the US Ambassadors residence

By the time that I was coming up to finish, Babette was waiting and cheering for me and she jumped in at the end to help me get over the finish! YES!! Another medal for the collection! 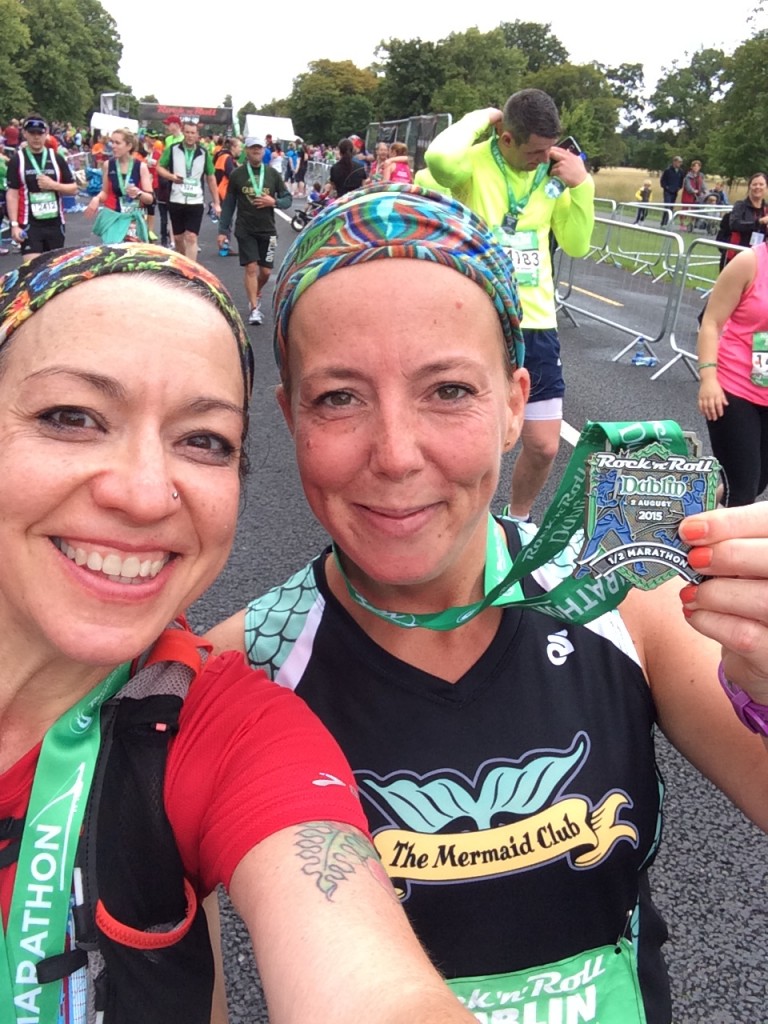 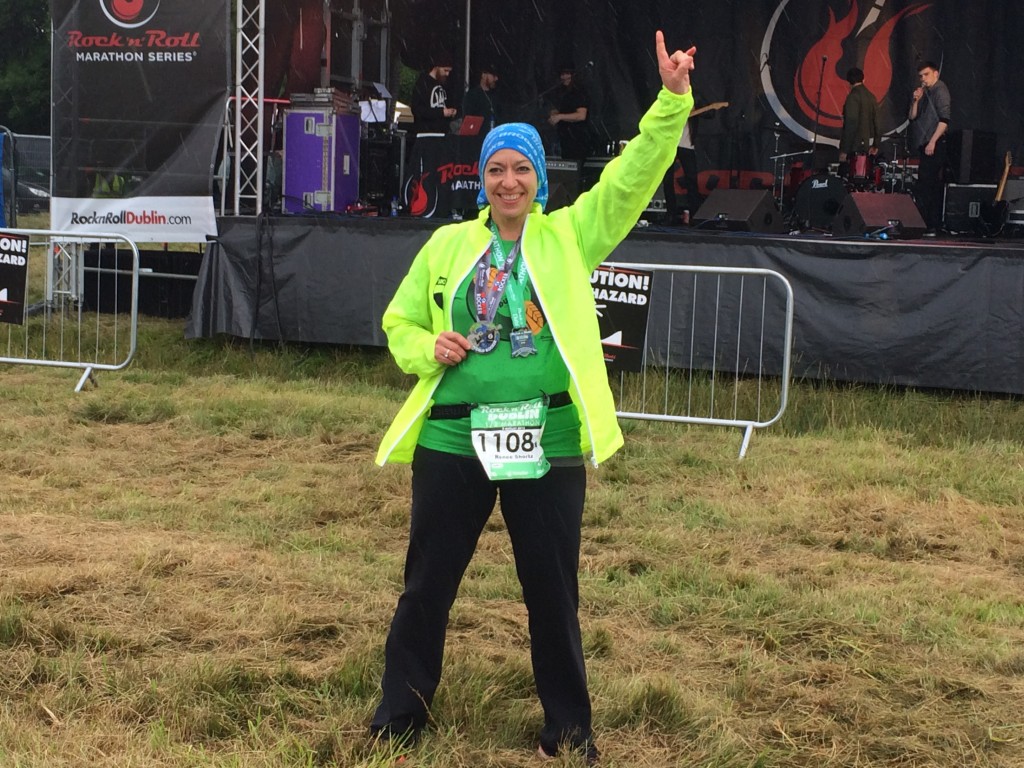 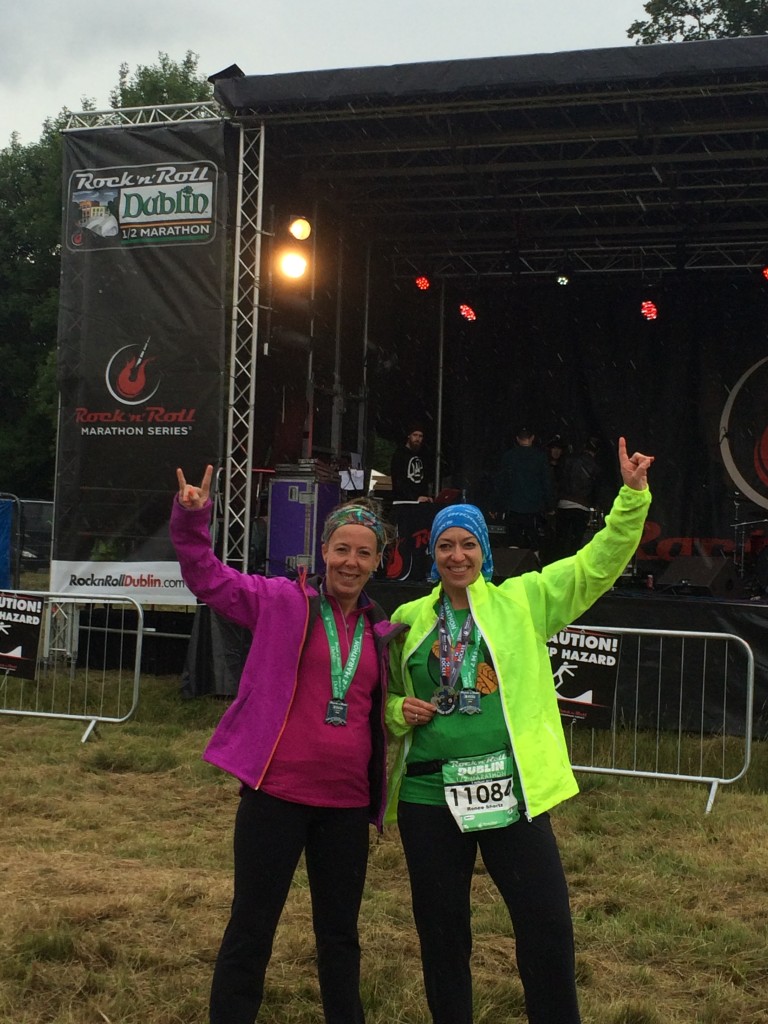 Afterwards there was a 5K fun run but I decided 1 Half Marathon was enough for that day. We changed some of our clothes and managed to find M at the finish as well. Then, we walked over for me to collect my WORLD ROCKER medal!! 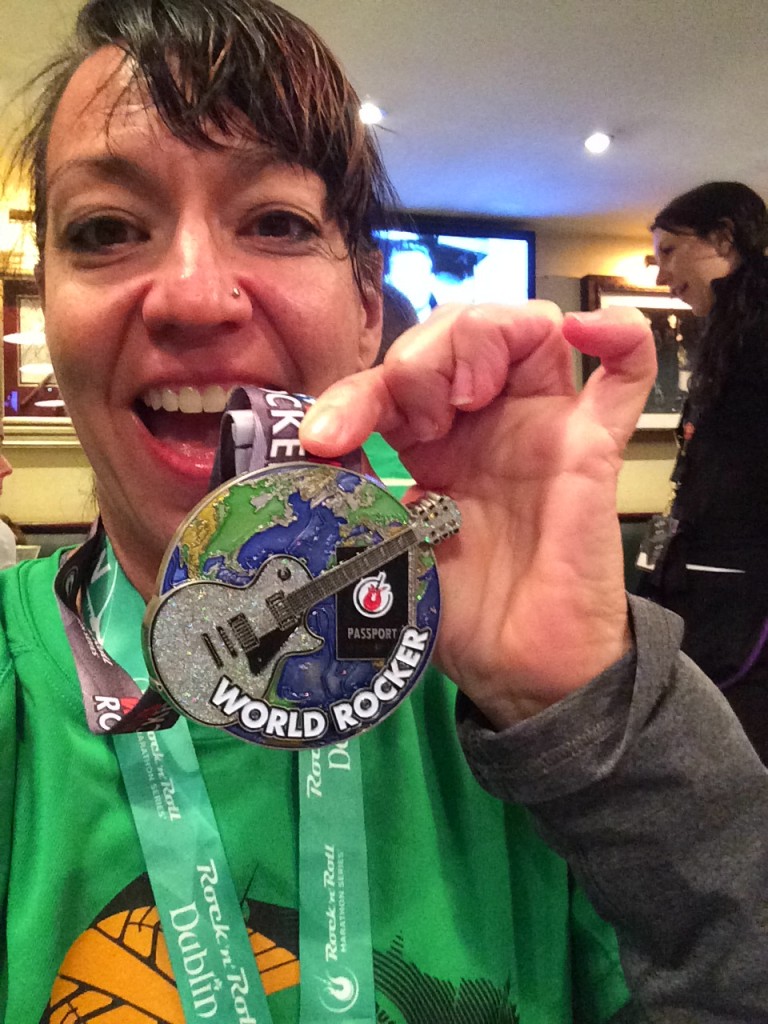 Unfortunately it was raining pretty steadily and a lot of people left. A sad day for the bands who showed up to play for us. I got a coffee and spent a few moments texting Sue (from DoThingsAlways) and I was able to find her as well! Sue actually is a rock’nblogger too, she lives in Canada but is originally from Scotland. I’m so lucky to get to meet people from all over with this fun little hobby of mine. 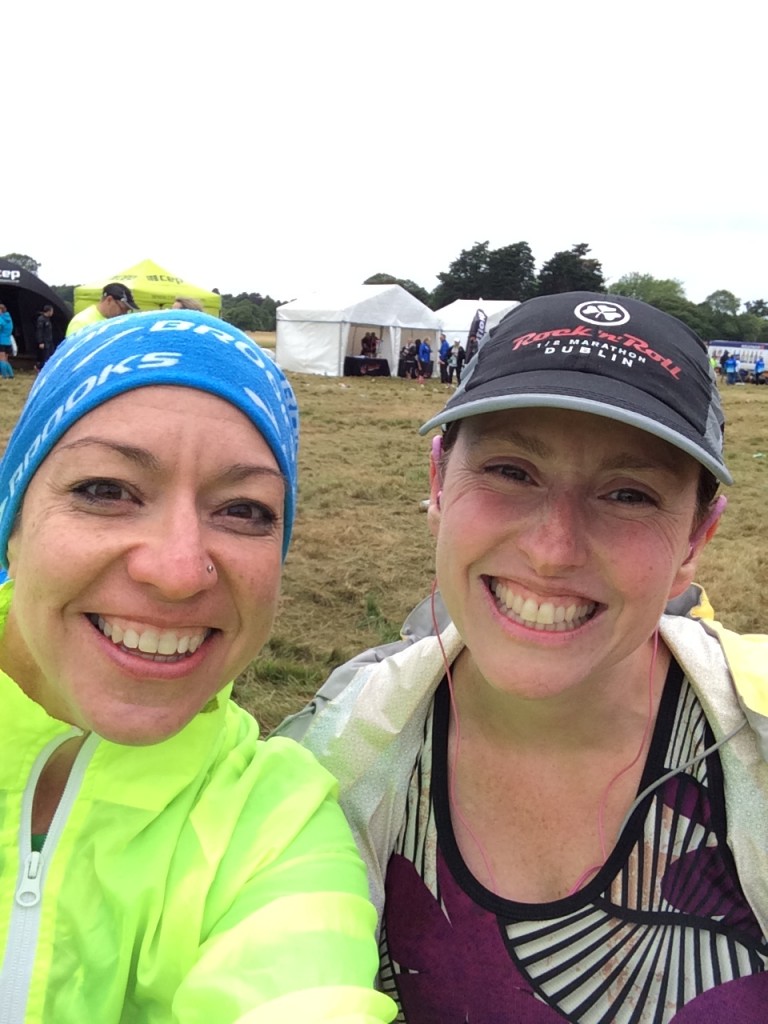 with the amazing Susan, another Rock’n’Blogger!

OF course by the time we got back into town (great transportation set up by the organisation as well) we HAD to hit up the HardRockCafe for our food and beer reward. NOM!! 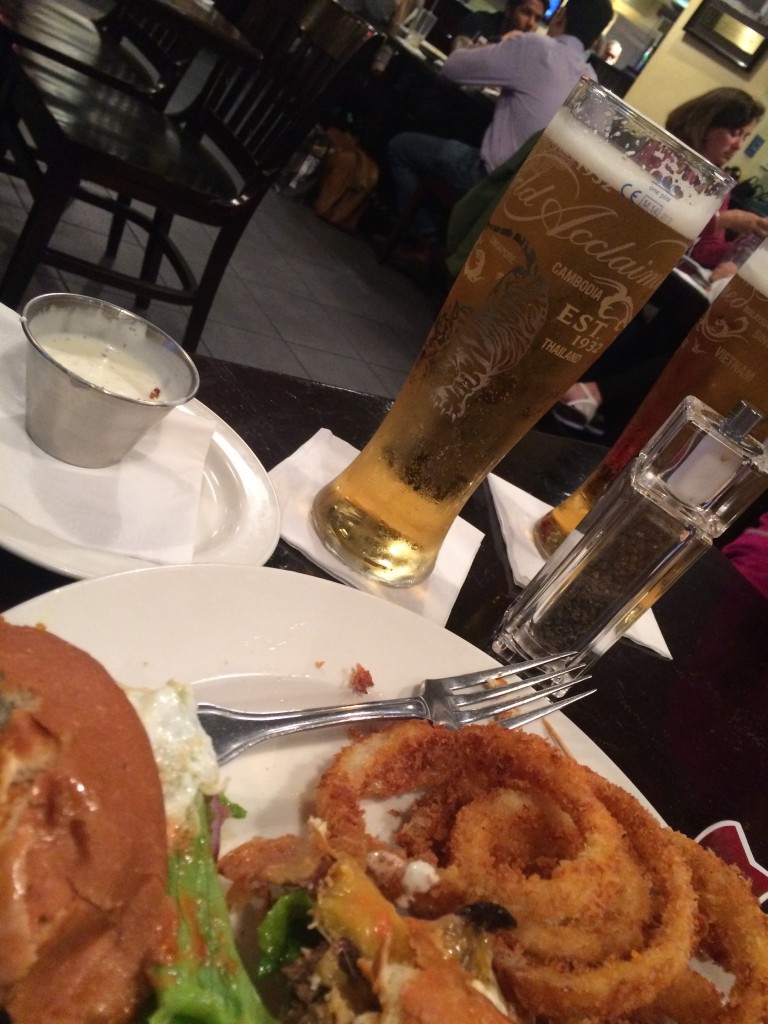 Food Rewards after the Half!

I would love to do this race again! Now that I know about the hills, I would love to try it when I’m not exhausted and have been sick! It was not my best race ever but I can say that I really enjoyed it! So if you ever get a chance and want to Rock and Run Dublin, I definitely give this one two thumbs up!