WOW that was AWESOME!

I just returned home from my 1/4 Marathon at Egmond aan Zee. I have to say, it was incredible! I am so happy that Donna asked me last month in London if I wanted to do this race, as she and her hubs would be coming over to participate.

Being that I normally jump into something without really knowing what I’m getting into, I kind of panicked after I read what the course was really like. And how I described it yesterday was not completely correct. It was more like this:

To be honest, my thoughts went back to my first race and how horrible the beach part of the run was. Back then I thought to myself “I never want to run on the beach again!” So what was I thinking, signing up for a bloody race, ON THE COAST, in January??? I mean, I don’t know if you guys know what the weather is like here, but January is usually not super-friendly and you can pretty much count on a free skin ex-foliation just from walking along the beach, the wind is that bad. But, OK, I like to keep to my commitments and I’d already missed out on my New Year’s Eve run, so, I was going to do this thing.

What a gorgeous day it turned out to be for a run! I mean, January people! I was completely ready for wind gales and crappy sand but it was none of that (ok, a little wind). Unfortunately I did not find Donna before the race and I had to give up my telephone at a certain point (we were texting each other). I was warming up a bit when a woman came over to me to tell me how cute my skirt was and hubs, who was behind the gates, just assumed that I had found Donna because we’d spent the few minutes before the start chit chatting with each other. 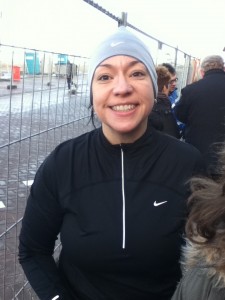 The race started and I felt pretty good. Normally when I’m just training, I really like a good 5 minute (or more if it’s really cold out) warm up. With races you never know if you’ll have the space or time to warm up and today was no exception. I did warm up a wee bit whilst making our way to the start and then a bit of running in place and light stretching before the bell went off (Bell? Horn? Start thingee?). Sometimes during a race I feel like I get off to a rocky start because of lack of warm up. Today? Piece of pie. The first bit was through the seaside village of Egmond and then we hit the beach after a couple of kilometres.

What a glorious run on the beach! Getting down near the North Sea’s edge was in soft sand but near the water it was nice, flat and packed! TOTALLY different from Zandvoort! I was able to run the whole way on the beach, unlike last year, until we reached this incredibly steep hill to go up and into the dunes. THAT I had to walk up and guess what? Not a single soul was running up that hill!

Last week Wednesday when I was rushing around trying to get to the American Consulate on time, I did something to my knee and have been feeling twinges ever since. This hill kind of made my knee uber-sensitive. Once I was all the way UP, I had to go DOWN into the dunes. It was a little painful, so I just stayed on the right and made my way slowly down onto the paved area of the dunes. I got running again and felt OK. I carried on for a couple more kilometers when, around 8KM I saw several Highland Cows (If you are Scottish, “Heeland Coo”), in the middle of the Dutch DUNES! 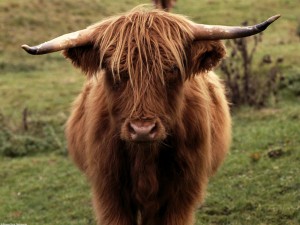 Like 10 of them! I was so amazed I don’t know how I stayed upright!

Anyway, I carried on, making my way up one more dune hill (the third) and soon I was making my way to the finish. In true racing style I picked up my pace this last 500 meters to get myself strong over the finish line. Final time 1:16:32. I lost several minutes climbing my way up the hill and a few walking down the hill into the dunes. It’s fine, I’m happy with the result. I thought maybe 1:20 and set my playlist up for that, so really, I beat the time that I thought I would make it in at.

Here’s Donna and I afterwards (we finally caught up with each other!) both with lovely hat/running hair

Funnily enough, after I got home I was just going through the tweets that mentioned #Egmond and I came across @ellensassen and followed her (her tweet was in English; not that I’m opposed to Dutch, but that the tweet about a race in NL was in English interested me); turns out she came in about 30 seconds before I did! We must have been running next to each other! How coincidental is that??

Next Race: Zandvoort Circuit Run, 27th of March. Totally ready for it!

Did you have a race this weekend? Did you start training or even go for your first run of 2011? When is your first/next race of this year?