I had every intention of getting my Foodie Friday post up yesterday, then I ended up going out for “a quick drink” with colleagues and it turned into me getting home (station) at 9pm. Well, you only live once right? :)

So Food went a tad better this week – definitely had WAY less sweets and crap, but at some point we were celebrating 3 birthdays on my floor at work and they all brought AMAZING food. One colleague brought some asian snacks – vegetarian loempias, some fried veggie and meat thing and sticky rice rolls with coconutty-chicken. Oh. Em. Gee. Another colleague brought homemade lemon bread (cake) and another picked up some amazing cakes at a dutch bakery. Yes, I’m weak. And I’m totally ok with it!

I had in fact packed my lunch and snacks for that day, but I just kept them for the next day. Less prep and more sleeping for me the next morning!

Was hungrier than normal this week too – and it’s nowt to do with eating less because I’m not eating the holiday crap, it’s ALL about lack of sleep. What would this journey (ugh, I still hate that word) be without having learned something along the way? I know by now that when I’m REALLY tired, I also seem to have a hunger that nothing can truly satiate. So in the coming week, I’m going to do a little experiment. I’m going to get 7-8 (that will be tough but minimum 7) hours of sleep each night, or at least attempt it by being in bed by 10pm each evening. I will know probably immediately if this is what is causing my hunger because when I don’t get enough sleep it’s an immediate effect (meaning more hunger).

I’m trying to eat plenty of protein these days as well, and complex carbs. I feel like I still am eating too much, so next week I want to supplement my protein/carb snacks with some veg. This week I did manage to snack on some delicious cherry tomatoes and yesterday I chopped up 150g of cucumber slices. Some people call it rabbit food, I just happen to like that stuff!!

Been trying to get all my fruits in as well – normally I have a yoghurt with fruit, but I’ve switched to kwark (or quark or fromage frais) as it has more protein. I only have half a banana and measure out 50g of mixed berries (from the frozen section) and throw in a mandarin or two. I’ve been adding seeds and nuts as well (Lucky me, Lynda sent me Chia Seeds). What I find the most difficult is the balance of what I eat, the amount, and the actual calories. For example, I bought these Wasa Spelt/Dinkel crackers but they are 100cals each cracker!! I find them healthier than a Wasa “light” or a matze cracker AND more filling. So what’s the best decision there, you know? Hmmmmm. 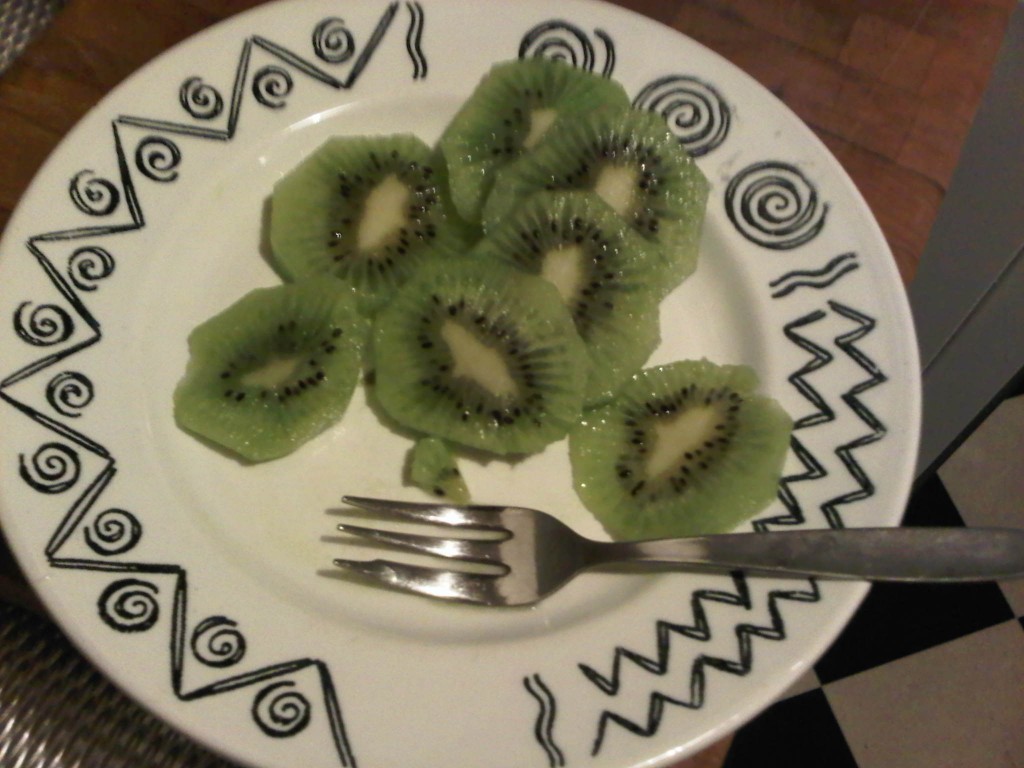 Veggies and Eggs (for breakfast) – this is a good bulky breakfast and actually I had steamed the broccoli AND cut up the veg the night before so it’s not a difficult thing to do in the morning. 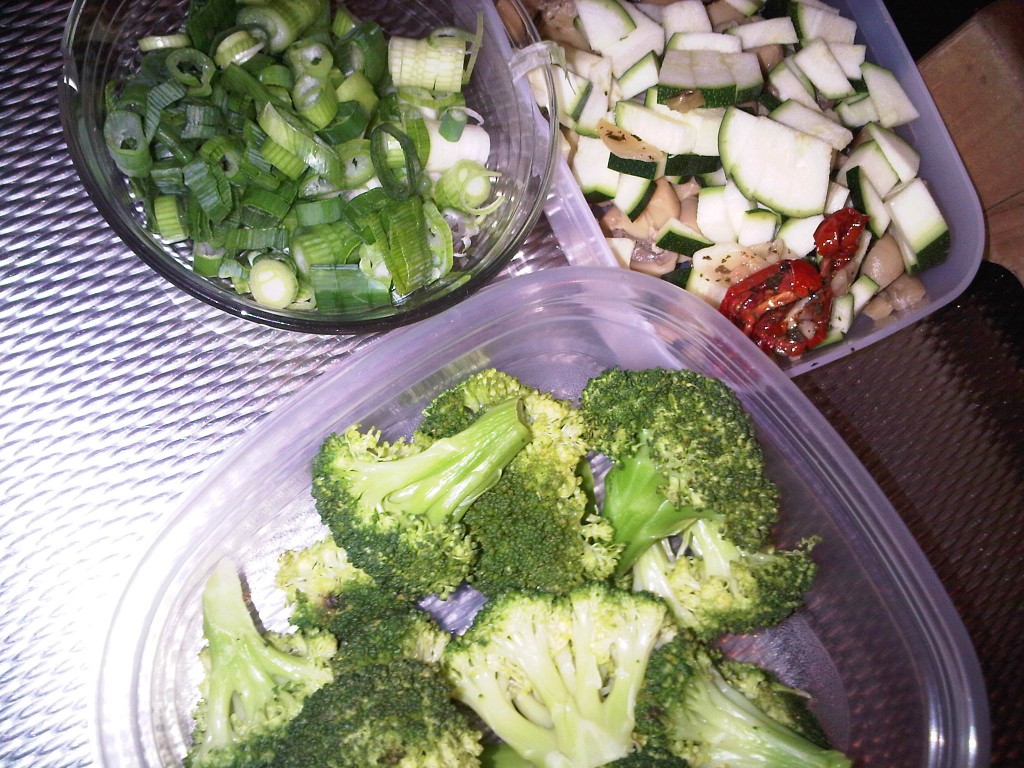 End Result, eaten in the train of course :)

Leftover Lasagne (yeah, not uber healthy but not horrible either) 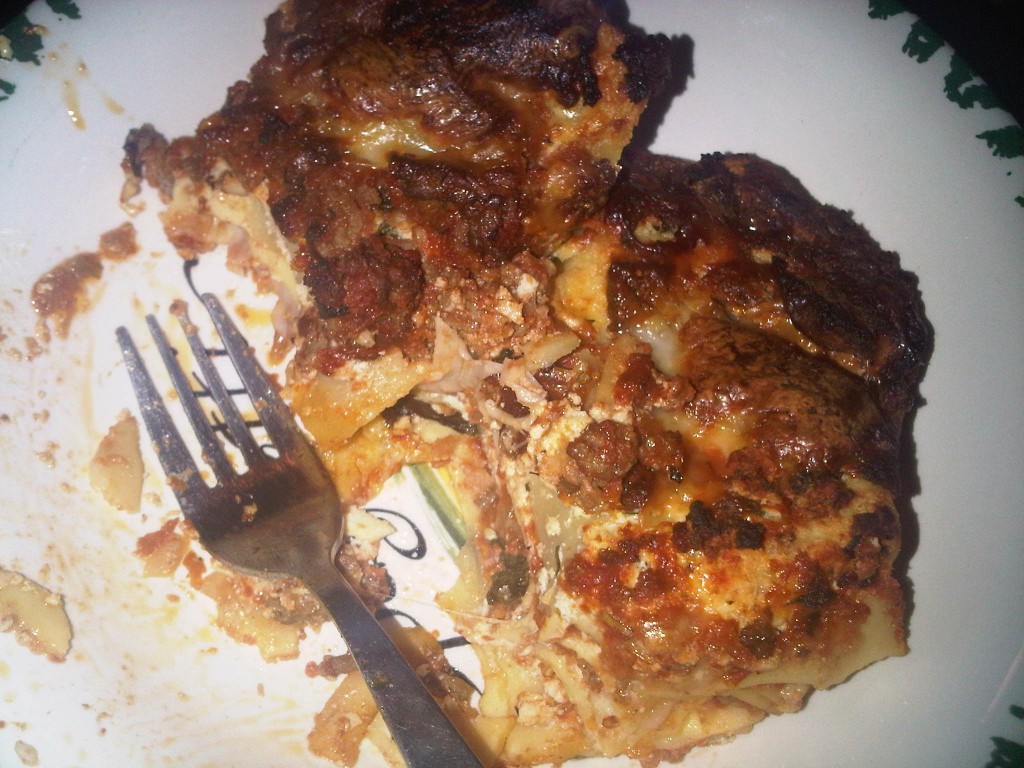 I made salmon, string beans and rice one evening – salmon I love and is SO good for you!! This is just with sea salt, black pepper, fresh rosemary and 1TBSP sesame oil mixed with lemon juice. DELICIOUS (when cooked,obviously) 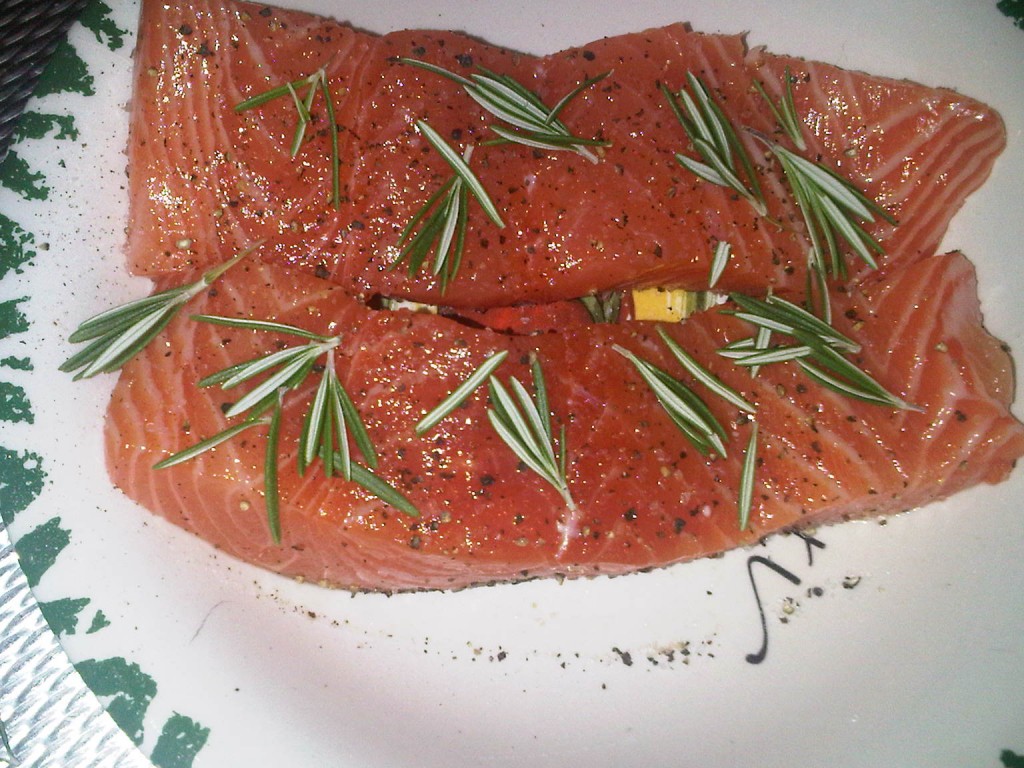 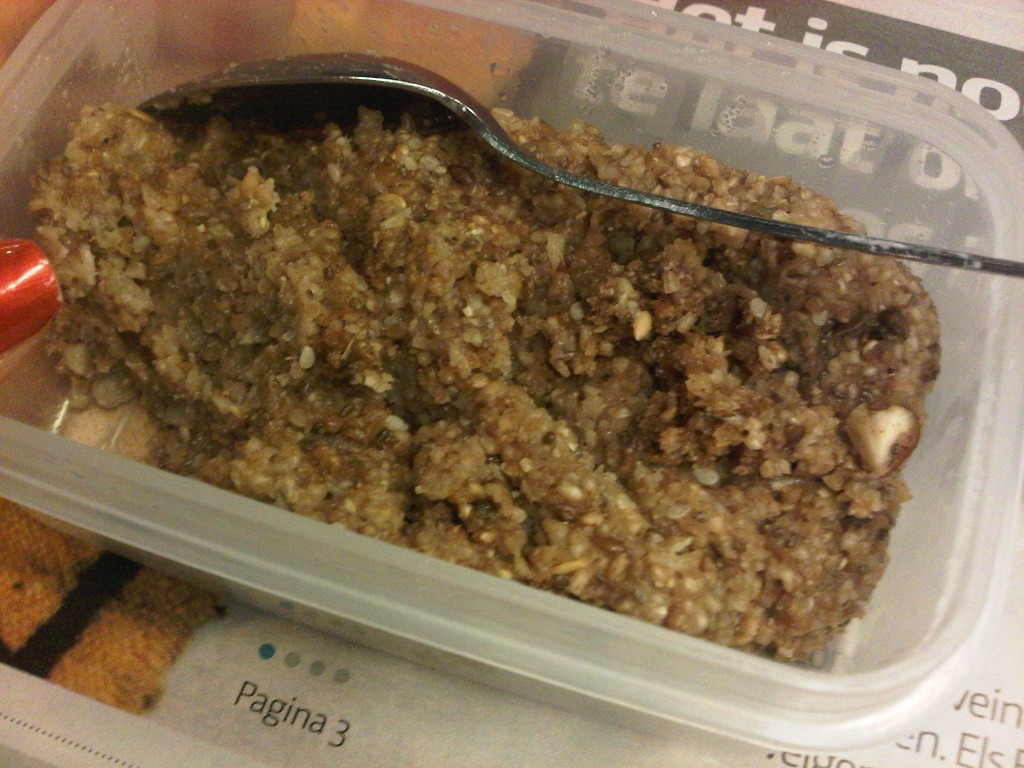 Had a couple of amazing lunches as well, but keep forgetting to take my phone with me when I go for lunch. Funnily enough, yesterday I was sitting next to a new colleague (who brings her lunch AND also happens to be a runner) and I noticed her lunch looked incredibly similar to what I was having a few weeks back… kamut, roasted veggies and chicken and I said to her as much. The look on her face was priceless – she was so surprised I even knew what kamut was! Another foodie doing her best to eat healthy!

So, there it is. Not 100% in the groove yet. Will probably not do a week in review simply because…

Yes, hubs will be driving me to Egmond aan Zee where I will participate for the 2nd time in the Quarter Marathon part of the race. I’m excited to say the least!! This is my first race since June when I had to stop for 5 months for my knee to heal. Things are different now – I’m running with no pressure at all in my head about being faster or better or does my butt look bigger than that person’s, etc. I’m running because THANK YOU UNIVERSE, I CAN!!!! It’s a massive relief to be able to do this again.

If I’m lucky I will also get to run with or see Donna who’s flying over from London and Alinda who lives here in the Netherlands as well (and is an expat like Me!!). Donna and I met last year prior to Egmond (along with Scott over at Your Inner Skinny) and then caught up with each other after the race!

I have done one run this week, just over 6KM – it was a rough week for commuting and weather. Usually weather doesn’t stop me at all since, well, I live in the Netherlands and it is what it is! But gale force winds are not something I want to run in. Plus I nearly got blown over just walking from the bus to home one evening (heard from a friend that her DOG actually blew over on his side!!!). Tomorrow is 10.5KM – since there’s no pressure then it doesn’t really matter what my time is – I’ll be sure to update though if the situation is any different than last year.

I have some other news I want to share with you, and that WILL happen tomorrow – I’ve already slightly let the cat out of the bag on Twitter, but not fully here yet. It’s VERY EXCITING though, it involves TRAVEL and RUNNING (hopefully some beer in there too and then my life is complete!) and I’m really honoured to have been chosen to be a part of an AMAZING team…