Things happen when you run

Running is usually just a “thing” we do, to prove something to ourselves, or to feel good about ourselves, or even to burn off the indulgence of a holiday, or a birthday, or a heavy weekend out. Running is so much more than just a physical thing for most of us who do run though… it’s a mix between physical and mental. I know for me, running is a sort of therapy. I feel much more grounded and peaceful within myself when I’m able to just get out in the fresh air (or even rain) and go for a good run to rid myself of negative feelings or thoughts. Running is brilliant, don’t let anyone tell you it’s not (and if you don’t like running, I respect that, it’s also not necessarily for everyone).

It’s become that kind of habit or hobby if you will, that I actually like to run if possible whenever and wherever I travel not only because, well, who doesn’t want to run in London’s Hyde Park, Berlin’s Tiergarten or around the Colosseum in Rome??? Seriously, I’m from a town of 40,000 people – I dreamt of living in another country but couldn’t have known I actually would. I dreamt of traveling and seeing the places and things that I’d only heard about on television or read about it books, but couldn’t have known those things would actually happen.

I always tell people, there are a few things that are “me” – running, traveling, coffee, music. An Ultimate Trip would include all four of these things, but generally speaking I have at least three of them combined.

Back in April or so, I met another expat (expat wife, trailing spouse or whatever you want to call it… but mostly just a cool chick from California who lived in the Netherlands like I do)this time on DailyMile, and in May I was struggling to get out for a run, as was she (she actually had a race to do) and basically she helped me get out and do something rather than sitting on my butt feeling sorry for myself. (Remember that sad little Half Marathon that happened in April, yeah it was after that). Since then I’ve had the opportunity to meet Monique in person and read her travel and running blog often (and feel envious about where she gets to run!!).

Imagine my surprise when she asked me if I wanted to be on a relay team for a Marathon? Uh, let me think about that for a milli-second – OF COURSE I WANT TO BE A PART OF A RELAY TEAM FOR A MARATHON! What better opportunity to take part in a marathon and not have to run the whole thing? She went on to explain to me that we would be a team of similar ladies… travelers, runners, bloggers, expats! GREAT! Where do I sign up!? 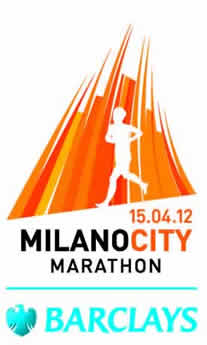 Ladies and Gents – On April 15th 2012 I will be running the 7KM leg of the MILANO CITY MARATHON!

That’s not all… yesterday I was reading more about the relay, it seems the 7KM is the LAST LEG of the relay. I’m going to be the one crossing the finish line *gulp* !!

My team consists of:
Monique, who is no stranger to traveling and running; I highly recommend you check out her blog here at Mo Travels:: Mo Runs

Hanna, who lives in Milan and blogs at Run Like Noone is Watching and can be found on twitter here

and Maya Marie who blogs here at Livin Life Daily who currently lives in Spain.