As you all know, on Sunday 28th March I participated in my very first race. And, as you all know, this is a pretty big deal considering that I only started running a year ago. At well over 200lbs too!

Leading up to the event I had been training and thinking about reaching the distance rather than even thinking about the time. I knew that the course would be different than running at home (around one of my usual routes) so after careful consideration of my usual pace, I figured I could do 12KM in around 1 hour and 20 minutes, but added 10 minutes for the 3KM that we had to run on the beach. The race rules were that you had to finish within 105 minutes of the “last start” (with 15,000 participants, the starts were staggered – my start was at 1.02pm, the last start at 1.20pm), which meant that I had just over 2 hours. I really had no doubt once I figured that out, that I would be able to finish. Even if I walked the entire beach I would still finish on time.

The predicted weather for the weekend was unfortunately for rain but the Universe was on our side and we really had none. It wasn’t extremely sunny out but it was dry and that was good enough for me! A friend of mine was supposed to join us on the company team but she was ill and had to cancel, so it was just Hubs and I in the car to Zandvoort. We live on the east side of the country, right next to the German border, and Zandvoort is literally on the coast, near Amsterdam, so we had a good hour and a half to drive. Me being the nervous one hating to be late, we left earlier rather than later so that we would have no issues with parking or with finding the rest of the crew. Our daylight savings time kicked in only on Saturday night (as opposed to 2 weeks ago for North America) and we made sure to go to bed early as we knew we would have an early start!

We awoke around 7.30, had a good hearty breakfast (but not too hearty) and made a few sandwiches for later. I also bought some energy gel the day before and some chocolate recovery bars but actually later decided not to take the gel in case it would make me ill (better to test it out first). We got dressed in our running gear, got our iPods together, made sure we had all of our information (number, time chip, etc) and left the house around 9,.30. As expected we arrived early, eventually found out where we had to meet everyone and settled in with a cup of coffee. I have to say I had totally forgotten how cold and windy it could be on the coast and Sunday was no exception. The wind was crazy and it was pretty cold!

The other guys finally arrived around 12.15 and we were meant to take a team photo at 12.50 but I didn’t realize I had to leave my bag in a specific area so I had to walk back to drop it off (in hindsight I won’t do this again, because I had too many things with me that I didn’t want to have stolen so I ended up running with my blackberry in my pocket and Hubs with his keys, wallet, phone as well) Yeah I pretty much was the one to hose the group photo, but whatever.

Our start was at 1.02pm. Just before one we all went to where our group was supposed to be and proceeded to yell and cheer and generally pump each other up before we had to go. I turned on my iPod and already started running in place since I’m pretty accustomed to a 5 min warm-up for my workouts. And then we were off!

To be honest, the track itself was quite ok, but it was a bit hilly in areas, though I totally expected that, what with it being a race track and all. The first 5 KM or nearly 5 were on the race track. What I did not expect was how rude people were on the track! There was a LOT of pushing and shoving and people running on the side of the track to pass on the right. Within probably 2 KM I already saw guys pissing on the side of the track as well. This really shocked me because we literally only had just started! Surely you would go to the loo before you start a race?? But anyway… I was going to stay on the right of the track but decided to run a bit more in the middle of everyone so I wouldn’t get pushed by runners trying to pass me.

When I reached the end of the track, we headed for the beach. At that moment, I saw my friends from Den Haag cheering me on! I knew they would be there, as they had been tweeting about it, but I really thought they were joking as I knew they were also going out on Saturday night (and trust me, when I go out with these guys I’m on little sleep, likely too much alcohol and/or a belly full to the brim with food, but always a good time, no doubt about that!). My friend R actually said he’d be wearing a Black and Pink Yankees cap and he’s quite tall so that’s how I recognized them. At that moment, I felt really, really good. That I was running and that my friends came out to cheer me on felt absolutely brilliant.

But the beach was really hard. And it was crazy. There was no real rhyme or reason to how people were running it. I headed for the water’s edge as I thought it would be easier to run on but the water kept coming in and it was just too soft. People were zigzagging all over the place, pushing and shoving and after about halfway (1.5KM) I just had to stop trying to run and just walk it. I found out later that most of my team also had to walk part of the beach and on top of that, one of the girls (the girlfriend of a colleague) got pushed onto the sand and was so angry that she got up, found the guy who did it and punched him in the face! Her boyfriend didn’t know about it until later – he was trying to get to the finish line faster than her because she *always* beats his time. So here he was celebrating that he was a few minutes faster and she’d already beaten a guy up in addition to running!).

After the never-ending beach from hell I finally reached the end and started the run through the town centre. This part I loved as well! There were so many people on the sidelines cheering and yelling, there was music playing, people were smiling and clapping – it felt amazing! I think I was smiling throughout the entire town run.

Finally it was time to hit the race track again. I knew it was about 2 more KM so I paced myself a bit and then decided to speed up. As I reached closer to the finish line I saw my friends again! And I smiled and did a Rocky Pose and ran as hard I as could towards the finish line.

My official time was 1:28:24 nearly 2 minutes faster than I expected! And I got the best compliment from my colleague who has been an amazing support to me – he said I looked absolutely glorious crossing the line and he was so proud of me.

The end was also a little bit weird though. As I crossed there was just a bottleneck of people standing around, cheering each other, fixing their shoes, stretching, etc. I couldn’t believe it. I mean, why would a person just stop in the middle of the way when other runners are coming across? So the cool down part wasn’t so great, but ok, I survived. I saw two (male) colleagues just ahead of me, which means I was only just behind them in official race time (and these are guys you would expect to kick ass on this kind of thing – athletic, football-playing types). We slowly reached the end where we could walk through and pick up our medal and get a sport drink (which I never ever consume but thought it was a good time to try). Afterwards I turned in my time chip and had a message on my phone (since I Had it with me) that Hubs had picked up the bag and a phone call from my colleague that they were back at the place we originally met up in a few hours earlier. As I was walking my friends found me and we went together to the café. I had to make a pit stop and pretty much all my colleagues left, so the 5 of us went to eat fries (well-deserved) and finally around 4pm we left to go home. We were all pretty much frozen at that point and my friends had to go back to Den Haag as well as we needed to head back to Arnhem.

The ride home was uneventful but still I felt really, really satisfied. I did it! I ran my first race! 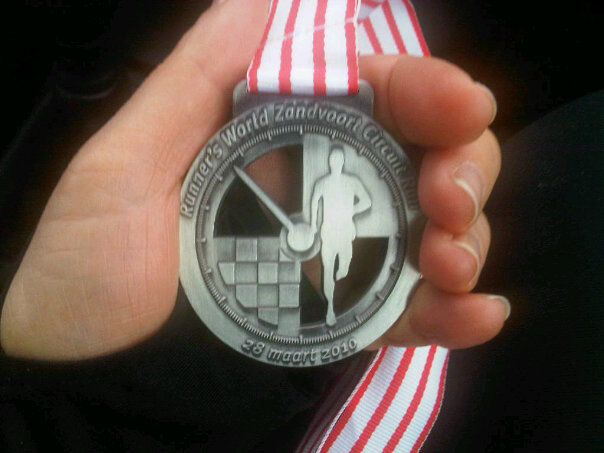