Monday – rest day. It must not have been very exciting because I honestly can’t remember anything that happened on this day! 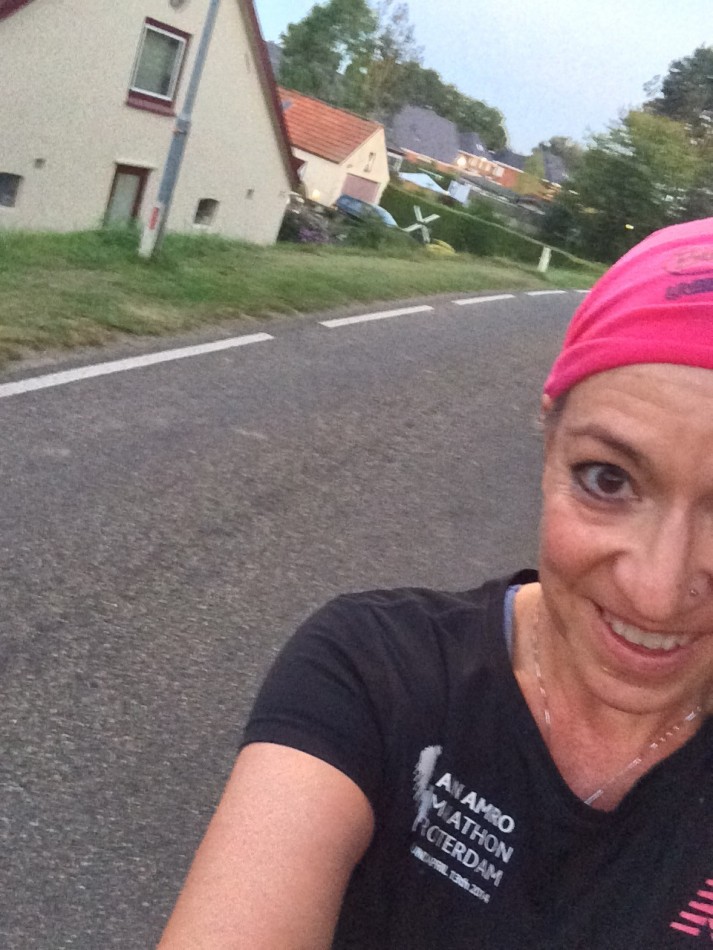 Also, got my copy of Like the Wind magazine in the mail, and I’m featured! They contacted me a while ago via Instagram about my tattoo and they wanted to know the story behind it. I was so happy to share the story! LTW is different than other running magazines as it’s stories from and about runners and contains some amazing artwork. 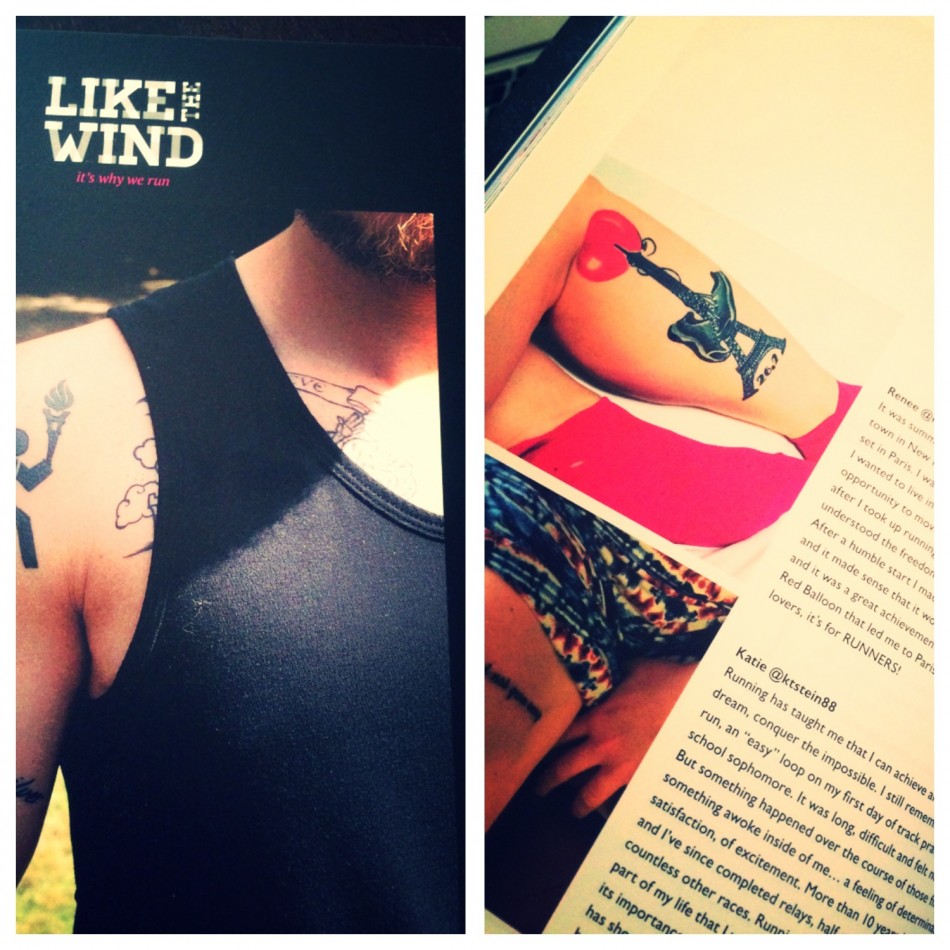 my leg is now “famous”

Wednesday – officially was a cross training day, thought I’d take a rest day, ended up cycling. Since we never know how long the good weather will last, I wanted to take advantage. Ron had a long interval (warm-up then 6 x 6 miles with rest in between, then cool down) and I could tell he wasn’t feeling it, so I offered to just go with him on the bike. In the beginning he was super grumpy; I did my best to help him and cheer him on and it seemed to work. It really helps a huge amount when someone is there pushing you in a good way, helping you keep up your pace. Super proud of him – he didn’t want to do it, wasn’t feeling it and then he smashed it out anyway! We ran/biked 23KM, got home, picked up his bike and went to Café Metropole for dinner (when 2 people are both training for a marathon, dinnertime gets tricky). 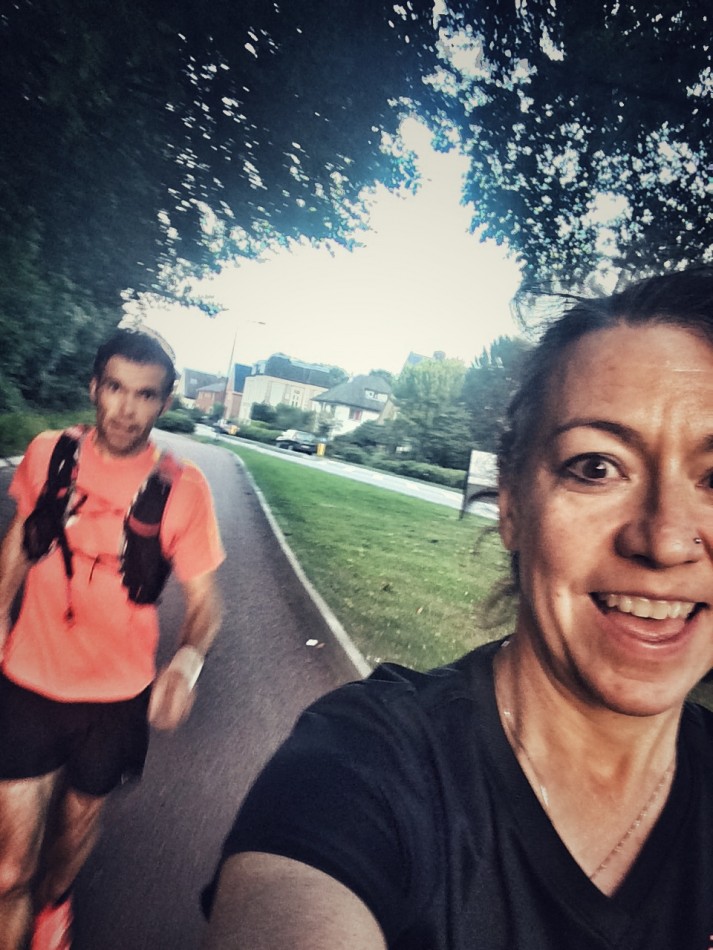 Thursday – threshold run on the plan. So this was the night that Ron was going to be coaching and cheering me on; I had 4 KM at a relaxed tempo, then 4KM at threshold, then 4KM back at relaxed tempo. So instead of looking at my watch all the time I simply followed his pace.

The first 4KM were average pace 6:30, then threshold was average 5:52… BUT… Ron actually ran negative splits on the 4KM which meant that I did as well! That pretty much never happens! The 3rd 4KM was then run on average 6:15. Yep it’s easier to run faster “relaxed” after pushing yourself for 25 minutes. I was super, super happy with the outcome of this run. Total distance: 12 kilometers. 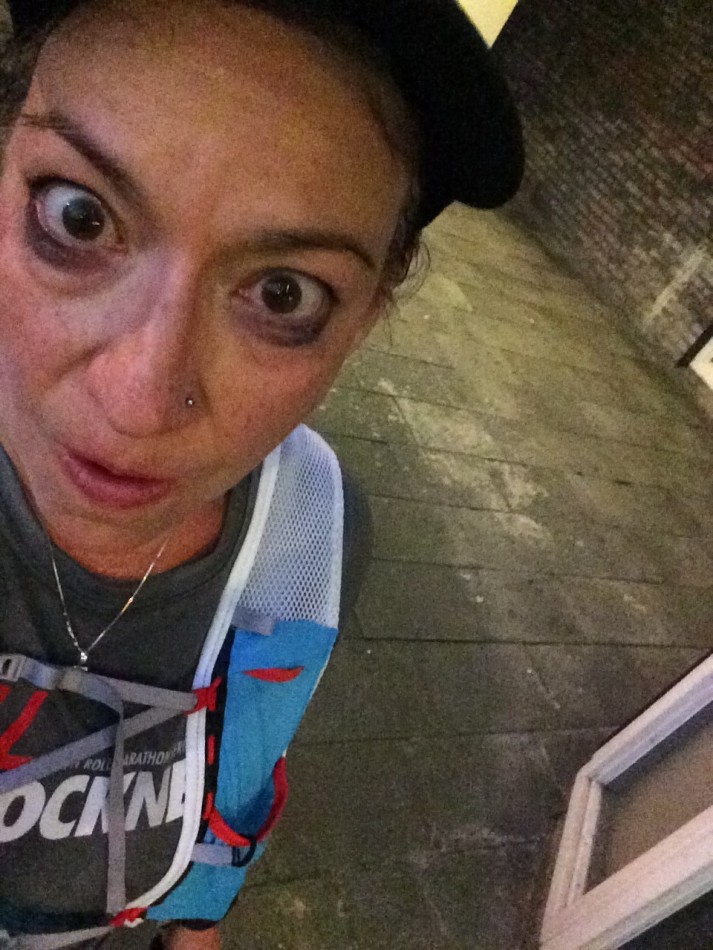 running is so glamourous.

Friday – 10K with Gerrit (switched run from Saturday). I haven’t seen Gerrit for a couple of weeks, so we had planned earlier in the week to meet up before his holiday. I also had chatted with Vincent a few times about running together, so I asked him if he wanted to come along. Ron figured he would join too, and why not? The more the merrier. Vincent lives nearby so Ron and I hopped on the bikes to pick up Vinny and we all cycled the 4KM over to Gerrit’s place. We picked a 10KM route that is actually part of the Bridge To Bridge Run (which is taking place upcoming Sunday – it’s part of the commemoration of Operation Market Garden; “Run to Remember Freedom”). It was a nice relaxed run, a little bit tough the second half but that’s mostly because of going up the bridges and uphill. Total distance: 10 kilometers running +/- 8 kilometers biking. 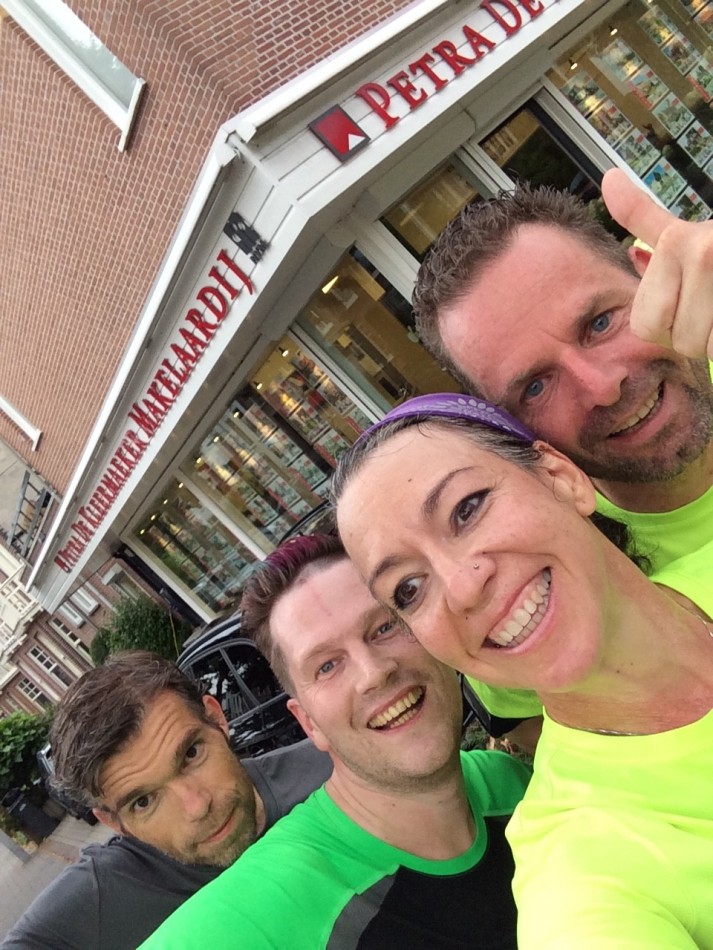 No running, gym or anything on the schedule! Just hanging out and getting ready to go out. Ron and I got dressed up and headed to an Italian restaurant for early dinner and then to a classical concert at The Soestdijk Palace gardens. 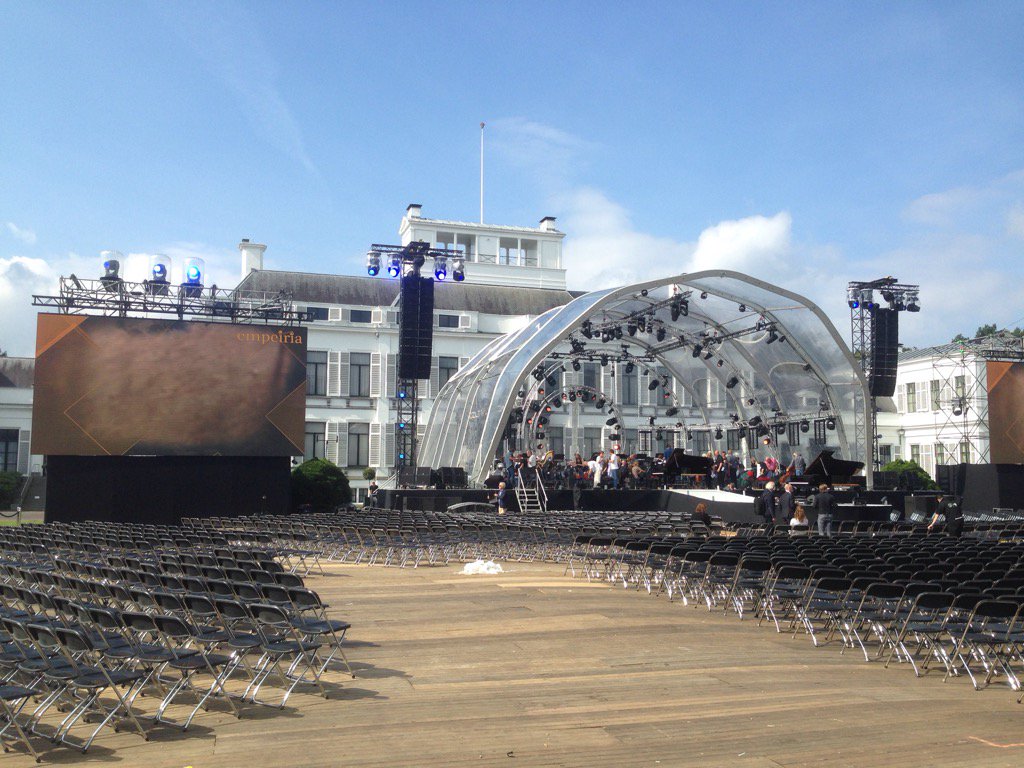 We actually went for the headliner – Ludovico Einaudi. If you don’t know Einaudi, well then, you really need to take 10 minutes out of your day to just listen to one or two songs. His music is mesmerising. Yes, I’m a rock chick at heart but I played classical music (violin) growing up and I still have a very deep love and appreciation for classical music.

Here’s one of my favorites:

(OK I realise that is a HUGE adjustment from 50 cent! HA!)

Anyway, we were there, Vincent and Wendy also had tickets and my brother and sister in law were there as well. In fact, we didn’t buy our tickets together at all, but Chris and Mariska were sitting DIRECTLY behind us! What are the chances!? 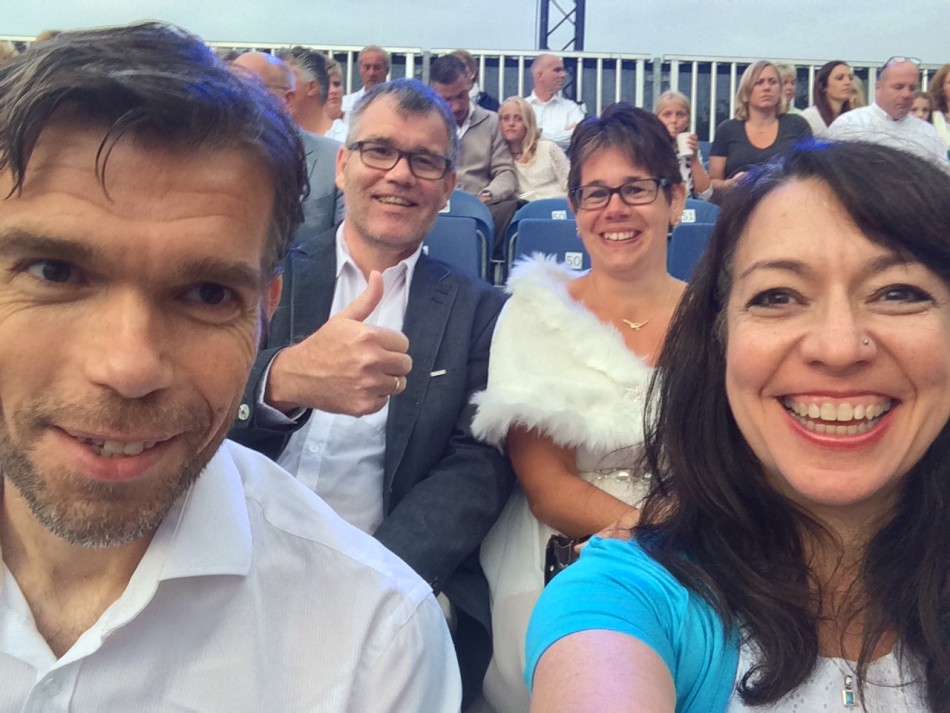 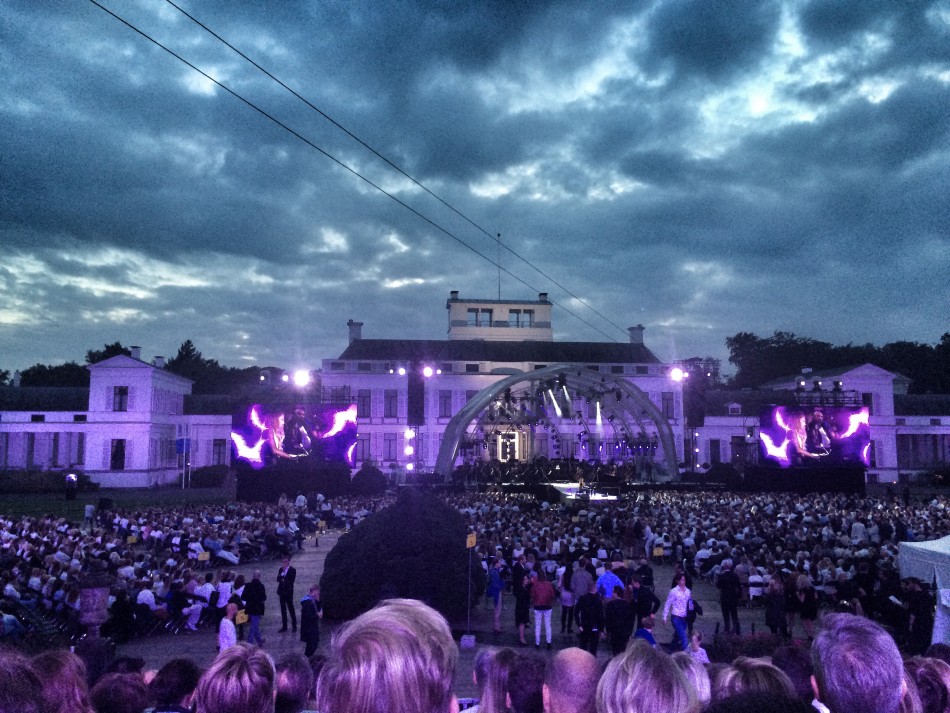 dramatic background for the concert

The show was amazing but we got home very late. Tough for the two of us getting-old people!

Sunday – this was the day I was going to get 30 kilometers finally. I have already been thinking about how to run / walk the marathon without feeling like I’m dying or falling apart, so I set up my watch to have me run every 4.5 kilometers then walk 500 meters in between, five times. Then the last 5 kilometers I split up as 3 kilometers / 500 meters walking / 1.5 kilometers running. I DID manage the 25 approximately how I wanted to run it (anywhere between 6:30 and 7:00). The last 5 kilometers were just so very hard. I ran out of water at 28 kilometers. But I KNEW I would make it this time, no matter what. I had no choice. I was not at home, I was not near my bike. I HAD to reach my destination as it was the only way to get back home. Again, Ron ran “with” me – meaning he did his thing and circled back occasionally to check on me. I did 30 and he did 38! But I definitely felt again what a mental game running is. No matter what distance you have to run, there are always these stages: 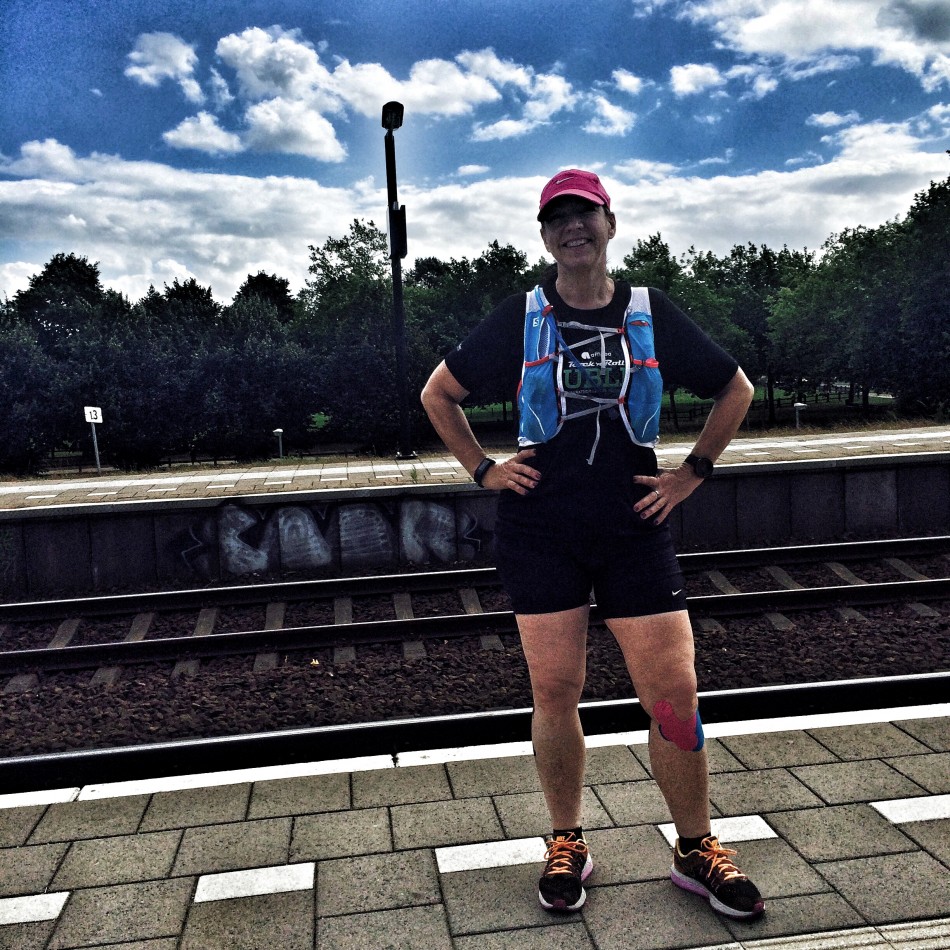 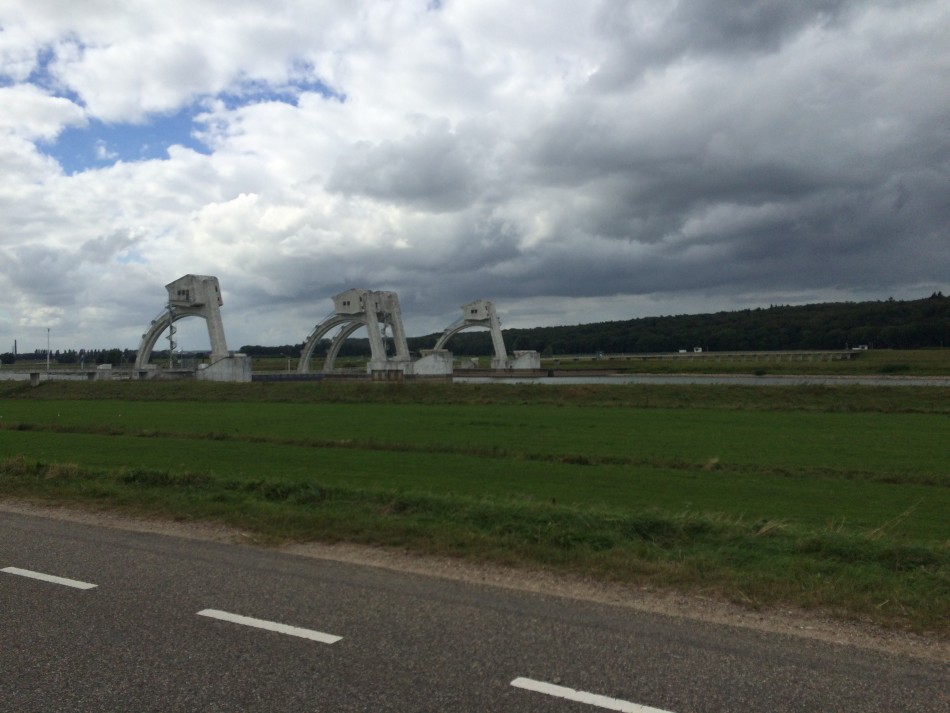 yeah! made it to Driel! 5 kilometers!

10 kilometers! Shoot this is going to be a breeze! 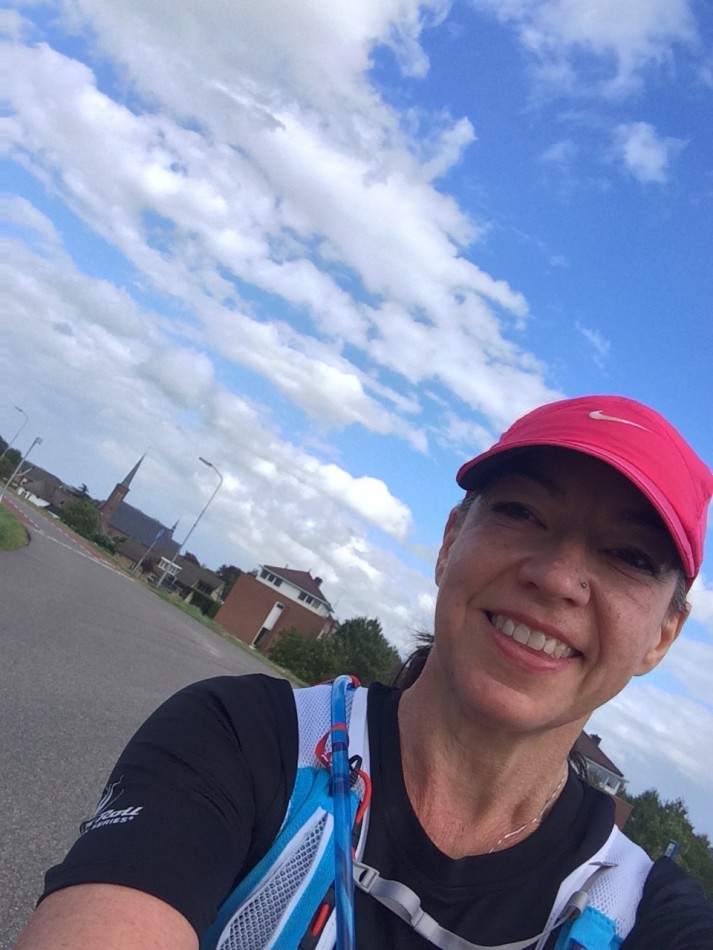 15k, maybe if I look at the pretty horses it will distract me from the pain in my knee. 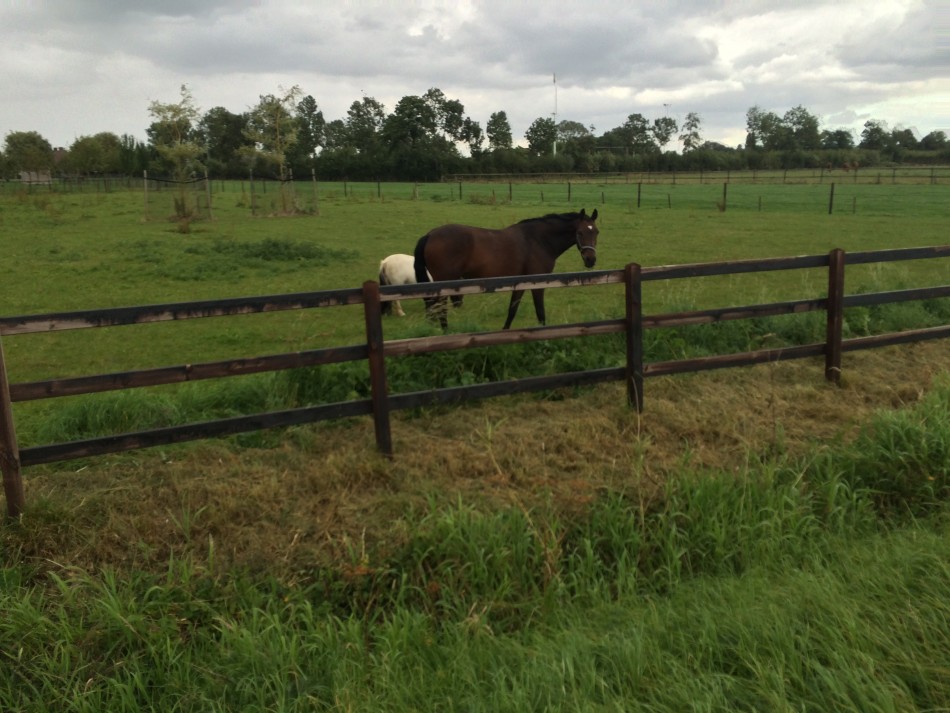 may I ride you to my destination, Mr. Horse? 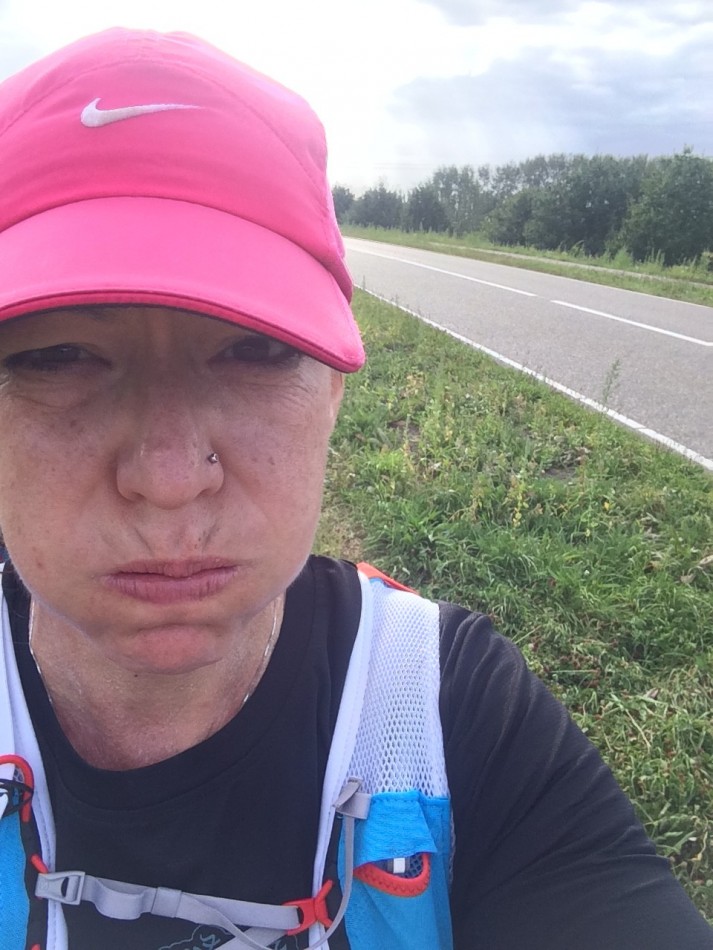 25KM, ARE YOU KIDDING ME???? *GRITS TEETH IN DETERMINATION* 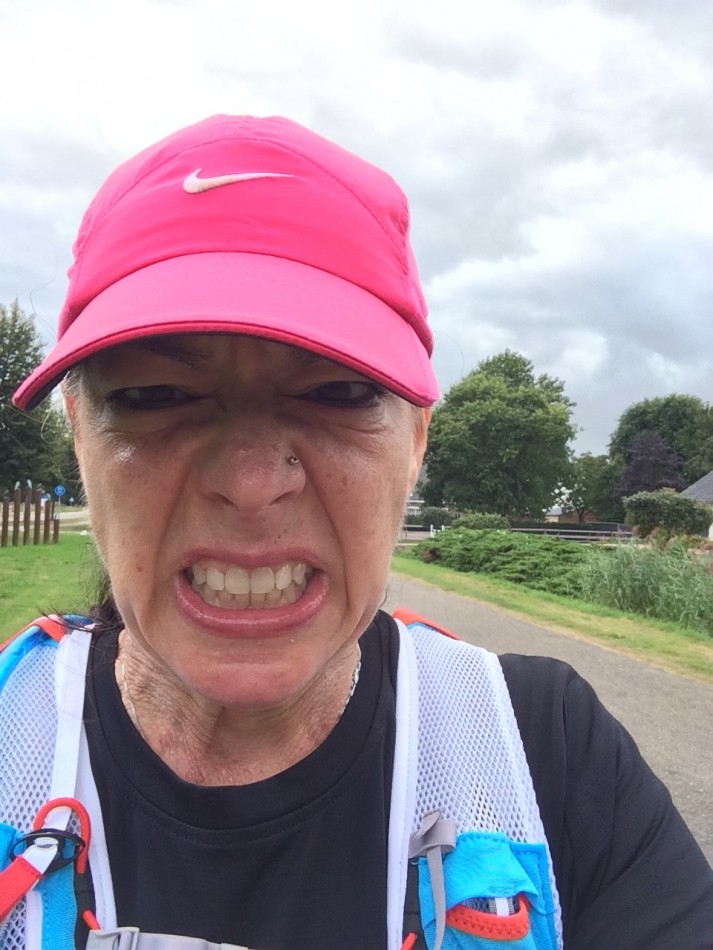 WHEN IS THIS RUN OVER???

END – Jeebus that was the hardest thing EVER. HOW THE HELL WILL I MAKE 42 KILOMETERS? 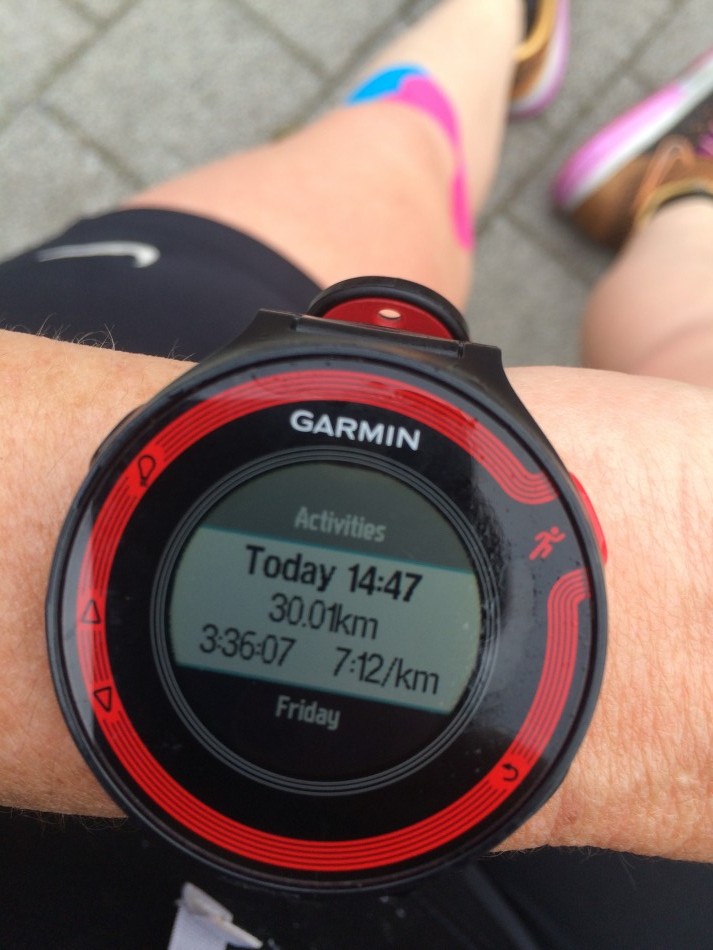 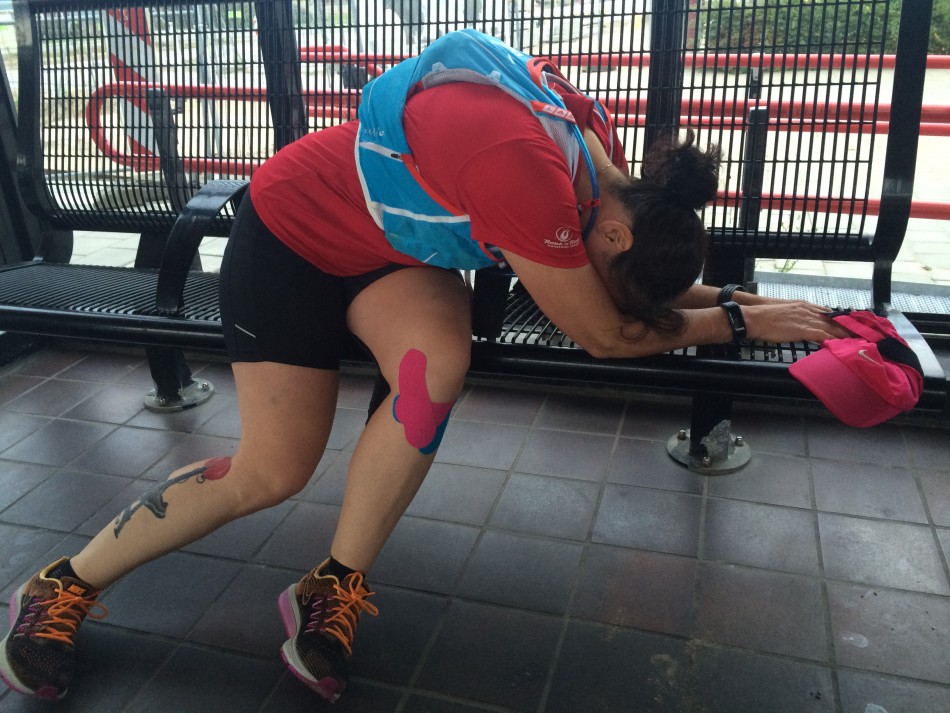 all i want to do is lay down now.

Of course once you eat and drink all the things it’s easier to feel good about it all again!

Well I guess that’s what a birthday weekend should feel like, right?

Have you gone through “phases” of running, no matter what the distance? Do you think longer distances require more mental strength?

On to Week 14 – this week is the beginning of the taper, sports massage, manual therapist, sports massage and a race on Sunday. Who said running was free???