Maybe it seems like it shouldn’t be a big deal. I’ve done this before. Five times, in fact. It’s not a big deal, right?

WRONG. It’s pretty huge. I’ve wanted to run the Berlin Marathon actually from the moment I decided to do a marathon (Paris and Berlin were the top contenders – Paris actually won because I did not get into the Berlin marathon when I entered the lottery! But after that happened, Paris just made more sense.). My second half-marathon ever was in Berlin. It was amazing that that even happened since my first was such a nightmare and it took me then two years to even consider running another Half. So I guess you could say Berlin is already a catalyst for pretty much ALL halfs and any distance further.

The first time I went to Berlin I was overweight and certainly not very athletic. I tried to be active, and we were definitely active that weekend, riding around Berlin on the Fat Tire Bike Tour, seeing the city from a different perspective. That weekend I also fell down quite a bit of stairs and wrecked my ankle. So my weight limited me and now my ankle was swollen and painful and I could hardly walk. To run Berlin is kind of an amazing thing, when you know that the first time you visited you were pretty limited, mobility-wise. 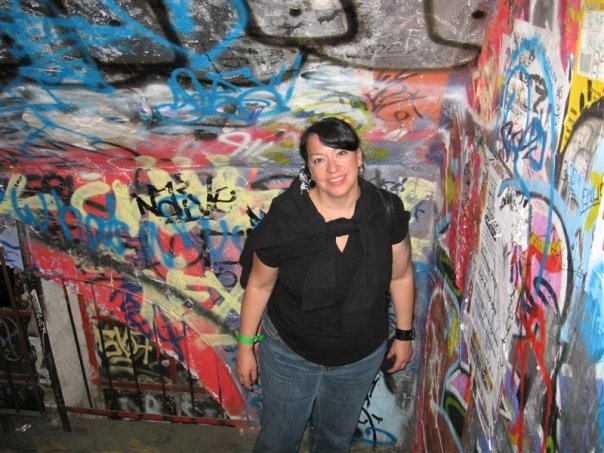 Right before I tumbled down the stairs. 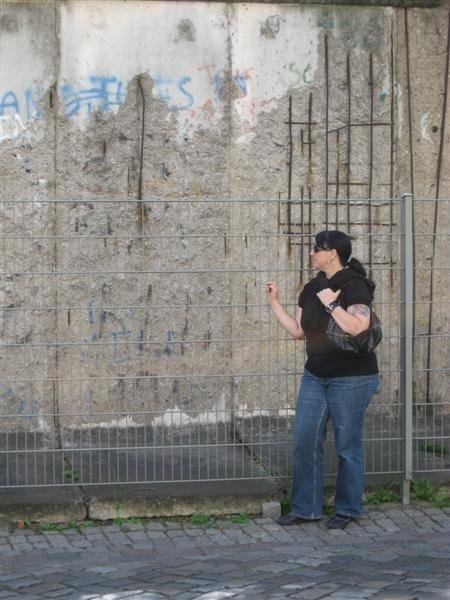 Standing at part of the former Berlin Wall. 2008.

My 2nd Half Marathon in Berlin gave me the courage and the belief that I could really do this and ever since then I have dreamt of the full marathon. I had a slight taste of it 2 years ago when Ron ran the marathon and I rented a bike to get around the city a bit to see him at certain mile markers. At that point I’d been to Berlin a few times and knew my way around enough (and had GPS on the phone) to do that.

So here we are. 2 more weeks and that dream of running the Berlin Marathon will be true!!! So how about an update of Week 14 marathon training?

Monday – Rest Day. I was super tired from the weekend. Didn’t sleep well at all so I pretty much decided nothing was on the schedule for Monday (as in, no bootcamp, again).

Tuesday – Easy 7K on the plan. Was pretty warm so I waited until 8pm to go out. To be perfectly honest I was still feeling pretty sore from Sunday so I knew it was really going to be “easy”. Plus I ate my salad way too late in the day… and that did not bode well during the run… if you know what I mean. I had to stop off at the Esso to use their facilities. Thank Dog! Stupid digestive system (actually it’s very smart and works rather efficiently, but still!!). Anyway, after the brief stop I was able to run a bit more comfortably. 7km on the money. Pretty warm still, too. 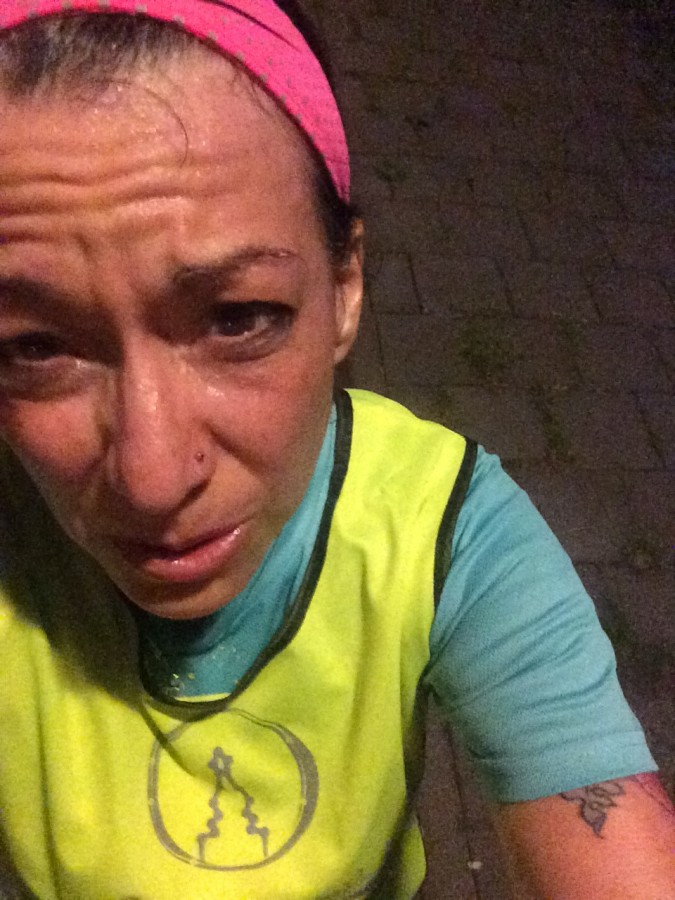 Wednesday – I had manual therapy in the morning. Basically he poked and prodded at my foot again. One more visit and I’m done. At least until after the marathon. We’ll see how it goes. It was pretty warm and Ron and I had planned on going to the track after work. It’s amazing how it’s like 10 degrees warmer on the track!!! We were sweating like little piggies in peak sunshine! I had intervals on the plan and wasn’t feeling it but decided I was just going to do it. 4 x 1200 meters + 200 meters rest. All intervals were done at 5:45! Total KM’s: 8.3 Felt GREAT after this workout! 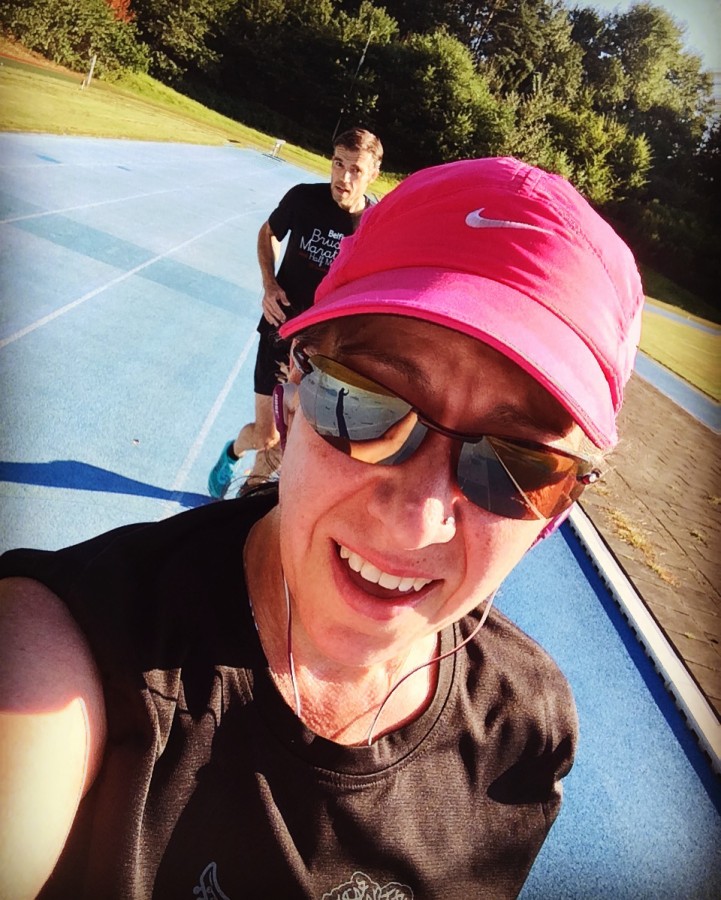 Thursday – I had sport massage right after work. Amazing. Felt much, much better. Then I Went cycling in the evening whilst the Fonz did his run and of course he chose a super hilly route. It was tough and while it didn’t really wreck the massage I did something to my hip and I had tons of pain when I went to bed. So naturally I slept like utter shite. Ugh. Stupid leg. Anyway, Cycling KM’s: 19 in total. 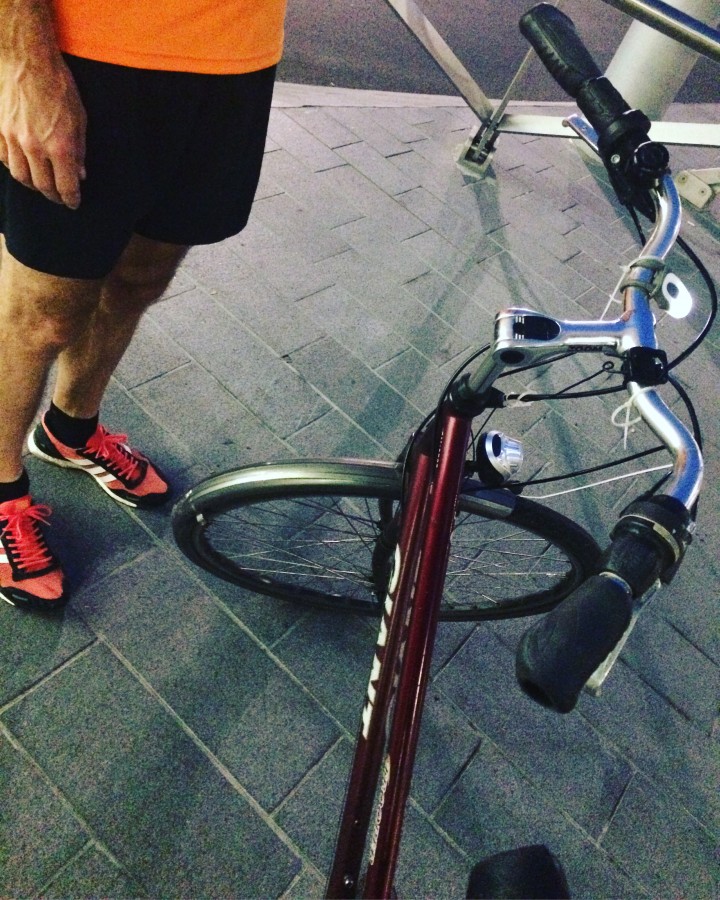 Friday – rest day! I had an appointment with a Sports Dietician after work. I’ll expand more on that separately but I have the feeling that someone FINALLY understands what I’m trying to accomplish. YES, I want to lose weight, but most importantly I want to learn how to properly fuel my body, so that I can get through the hard runs without hitting a wall. If I lose weight in the process, great. Once I know the plan I will share with you guys.

Saturday – I was supposed to have an easy 30 minute run as per the schedule but I decided later in the day that it just wasn’t going to happen. I went to the hairdresser (was seriously necessary) and then I spent some time at a cafe in the library reading the play that a friend gave me for my birthday.

It was so nice to just relax, take some time out, drink some coffee and read. I never read anymore. No time! But in the future I’d like to change that.

The kids were with us and they pleasantly surprised me with a couple of birthday presents and then The Girl insisted we try her new minty mud mask from Lush (which all four of us did, The Boy and Ron included and some hilarity ensued). So really, it was a great decision to take a rest day and really just do some nice things for myself and with the family.

Sunday – Bridge to Bridge 10 English Miles; I had 2 hours running on my schedule, I knew 10 miles would take me around 1:45 and I thought it would really be enough. This is the Sixth time I’ve done this run and the 3rd time I’ve done 10 miles. Last year I did the 10 mile AND the 3 mile. The first year I did the 3 mile and the 2nd year the 6 mile. Basically this run is in my city where I run ALL the time so I know it like the back of my hand and I don’t mind it at all! This year they even changed the course; we started on the Bridge (the John Frost Bridge, otherwise known as “A Bridge Too Far” which was destroyed during Operation Market Garden<) went slightly “backwards” if you compare it to the old course, ran up towards the Sacherov (but not all the way) bridge, along the dike a (where strangely enough cows were just hanging out, not fenced in or anything), back up towards the John Frost and then past it, over to the Mandela Bridge, through the city center and then finished on the bridge. The finish was tough! WHO PLANS A FINISH RUNNING 1KM UPHILL???

On average 6:29, finished in 1:45, just as I thought. was very happy with that, though last year I was 5 minutes faster and then everyone I know who ran had a great PR and I started to feel crap again and then I pretty much had to slap some sense into myself to stop comparing myself to others!! MY race was great, I had very little pain in my foot and in my knee, I didn’t feel ill or hungry or that I didn’t have enough fuel. It was a success, FOR ME. 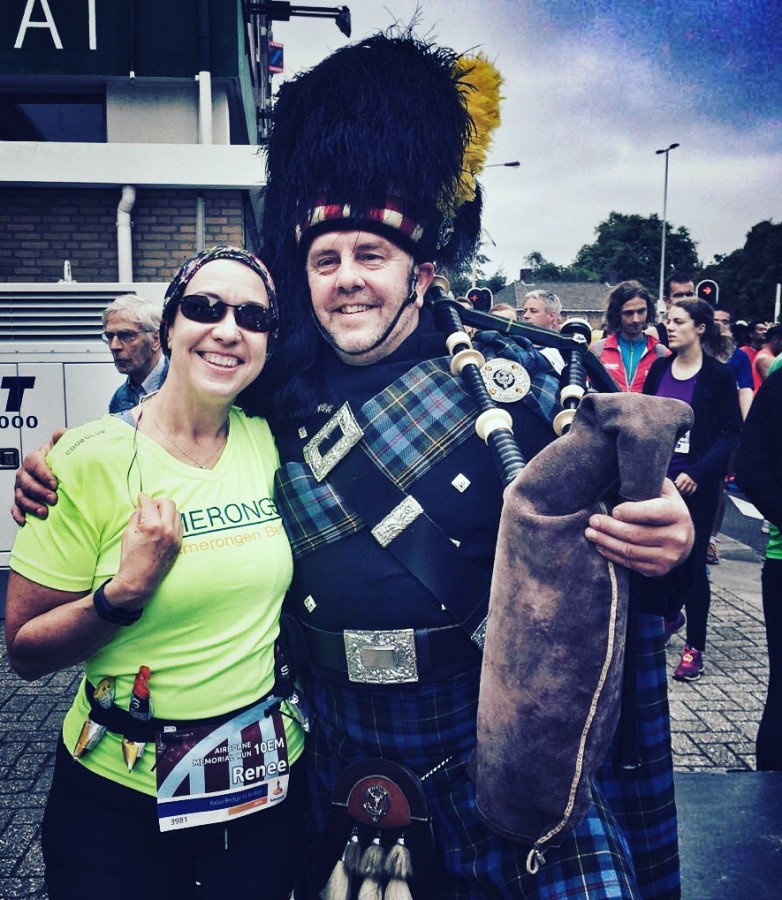 With the bagpiper before the race 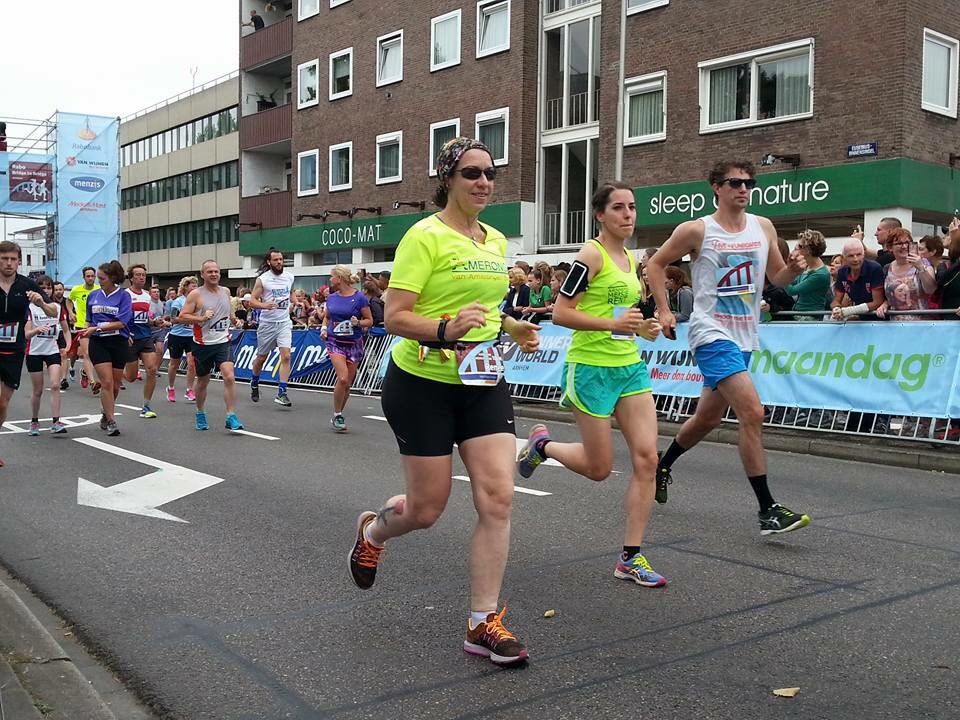 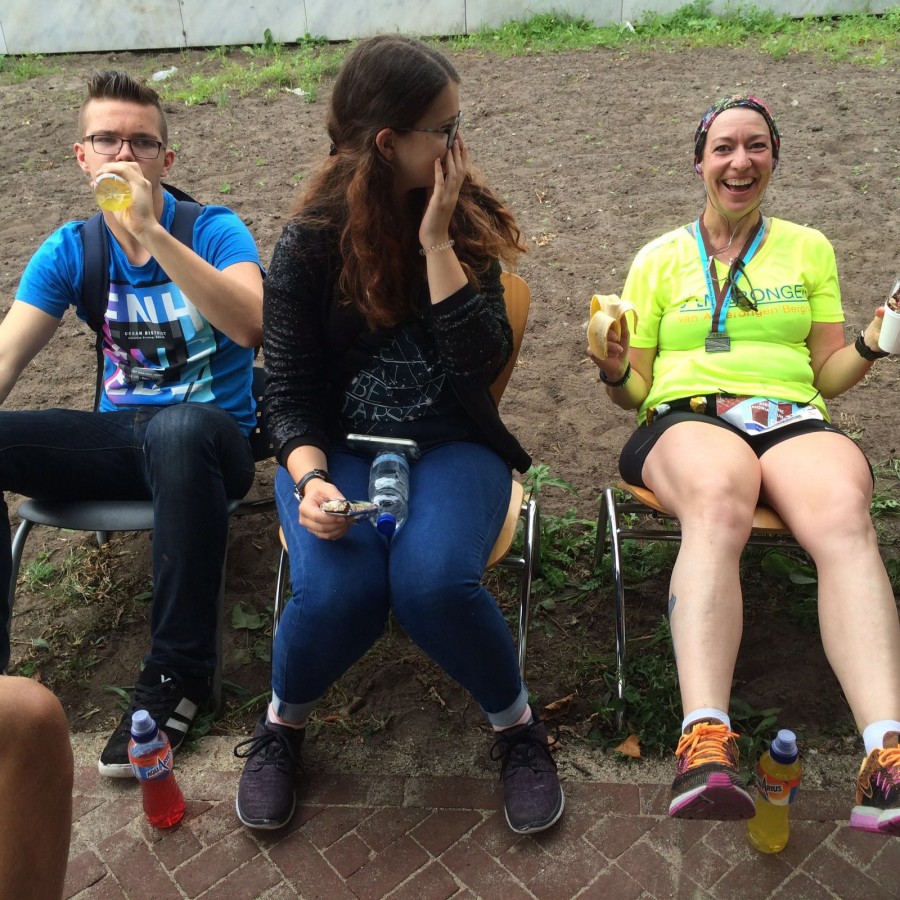 Afterwards the chair I was sitting in suddenly sunk into the ground!

I’m super curious how the next two weeks will go – I’m just going to keep following the schedule and try to keep my thoughts in a positive space. Berlin is a dream marathon. It doesn’t have to be a PR marathon.

How was your week? Have you ever done a race where you finished UPHILL? With all your training do you have any time to read?