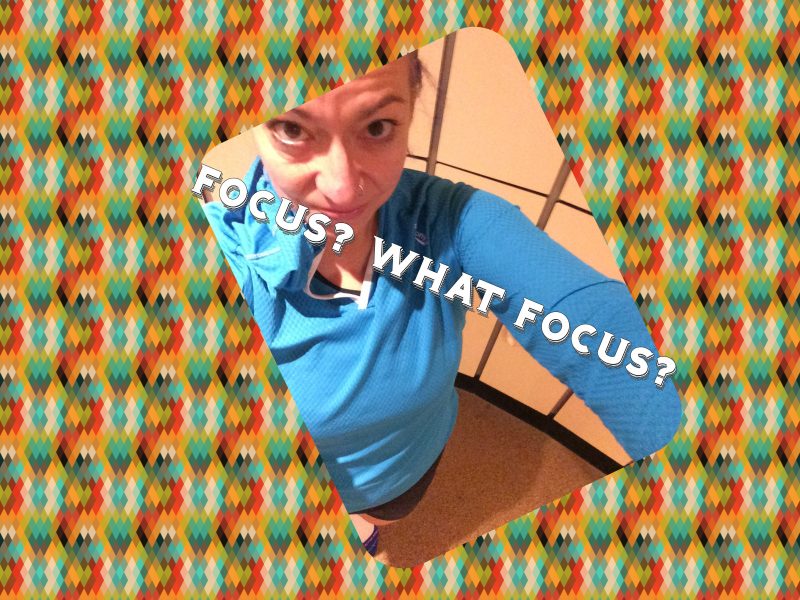 It was a weird week.  But I think a lot has to do with still being away and traveling back at the beginning of the week.

Monday – we were still in Naples, but had to be at the airport around 12:45 so it was breakfast, pack, check out and head over to the Duomo for the last bit of sightseeing.  Luckily we could leave our bags at the B&B  Unluckily that meant going up and down those damn stairs a few more times.  The Duomo was lovely.  I’ll elaborate more in another post so that you don’t get bogged down with travel photos/posts if that’s not your thing. 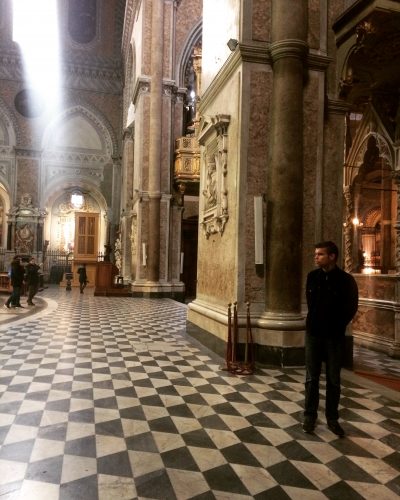 Flight was at 2, we arrived at Schiphol at 4:30 and by the time we got home it was 7:30.   Plenty of time for one load of laundry and a couple episodes of Suits.

Tuesday –  Back to work.  3km walk at lunch.  First client in the evening wasn’t until 7pm, so I had enough time to go home first to eat something.  Bike commute to work 4.4km.  Commute to the Health Centre and home 10.7km. 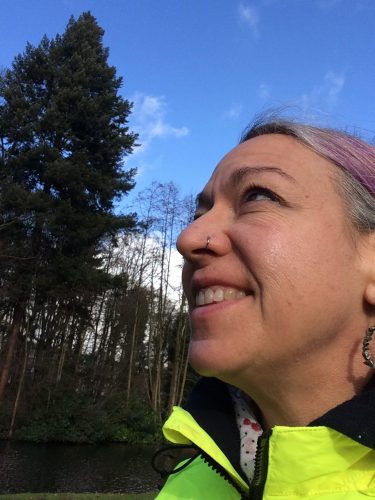 Wednesday – another working day, not too stressful.  However, I needed to go to the physio at 5:15 and I had an appointment at the gym at 7pm so it was all a little be too rushed for comfort.  I saw yet another physio –  this is one of the ones we sports massage practitioners work with and he was interested in what’s been going on all this time with my foot.  As per usual lots of tests to see if there was a link to the foot and for the first time someone said to me that it is rather common for people with flat feet to have an issue with their fourth toe!  But… apparently at the metatarsal section of the foot there is quite some compression which is probably not helping the tingling / funny bone feeling in the fourth toe (where my ortho said I had bursitis and yet nothing really changed after I got the 2nd shot of cortisone…) and also it seems that between my tibia and my heel the muscles/ligaments are quite stuck – there was a lot of pain when he pressed on my ankle and also under my knee when he did the anterior drawer test.   In a nutshell, it’s not “just” my toe, there is something else going on here.  His advise?  Give the new orthotics a good run (uh, walk?) and he showed me a stretch to do for my ankle and foot;  if no improvement he’ll get together with my podiatrist to see if adjustments need to be made again.  I have my new orthotics since the 5th of Jan, so not really enough time to know if they are correct or not.  If they are high enough to raise up my feet, it should ease the compression and eventually I’ll have no weird feeling in my toe at some point.

After the physio, Ron picked me up, we went home, got my gym stuff, picked up Vincent and headed to the gym.  I had an appointment with one of the trainers at 7 regarding some food advice and at 8pm was spinning!  It was SO busy!  There was only 1 bike over!   Bike commute 2.2km (had to leave the bike at work to take the bus to the physio).  No lunch walk.

Thursday – another day at the office.  I also had been trying, unsuccessfully, to get an appointment at the eye doctor because my left eye has been bugging me for the past 6 months or so.  (I have to say, I really hate that I have, what seems to be, so many ailments.  I feel like a healthy person who is kind of falling apart.)  I’ve been to the opticians many times as my left lens, that was for YEARS perfect, suddenly wasn’t feeling great anymore.  They gave me two different types of new lenses but I feel like I don’t see well out of them (well the first one, definitely not, it was just the wrong prescription).  I was pretty much told that I needed to just accept the situation and wear reading glasses more often.  Anyway, long story short, over the phone my doc said she would NOT give a referral (this via the assistant).  So now I had to go see the doctor to get her to give me the referral.  Sigh.  While I do love the socialised system in general, sometimes it’s a real bummer.   So now I’m getting cranky with the assistant who can’t seem to book an appointment for me until sometime next week (but “you’ll have to call back on Thursday”) who suddenly then had an opening.  At 3:20.  That day.  Ugh.  So quick arrangements with work and I was able to go.  I had to come back though, so I was at work until 6pm (I live around the corner from work and my doctor isn’t far from home either).  At 8 I had a date with my friend Gerrit.  He and his husband took care of our cats and I wanted to not only catch up with him but thank him in person for helping us out.  It was lovely to see him and then we even made a date for the next day to go see a movie together! Yay for spontaneity and friendship!  Total biking commute 11 (home/work/doctor/work/home)  + 7.8  into town and back for a drink with Gerrit = 18.8km.

Friday – ah… my glorious day off.  I was supposed to be having a long lie-in but Ron woke me up at 7:15 to tell me that there was a fire in the apartment building directly across from us and that’s why I was hearing sirens (in case I was hearing them).  Shocking.  It’s never happened so close to where I live and it really frightened me.  I thought about the people who lived there and hoped they were safe.  Then I saw my kitties and I hoped there were no animals in there.

Fire across the parking lot from us!

The fire was out pretty quickly once the fire brigade could actually get up there.  Apparently everyone is safe, but their apartment is a goner.  After all that negative excitement I didn’t do much.  A bit of this and that in the house.  Finally caught up on the blog and some social media.  Did some laundry and then got ready to meet Gerrit to see Call Me by Your Name.  Beautiful Film by the way!!

I had to quickly leave Gerrit and bike back home since we were meeting up with the kids at 7:30.  They wanted to treat their dad to dinner and a movie for his birthday, which I thought was great. Even my Step-D’s boyfriend chipped in.  So we had a good dinner at Happy Italy (Ironic, we were just eating the best Italian food ever a week ago, everything seems so sup-par now – but it’s the thought of course!) and then we went to see The Commuter.   It was an ok movie, definitely entertaining.    I don’t normally see two movies in one day, sometimes not even in one month so kind of a special day for sure!   But… that meant I did NOT reach my step goal.   Total biking 7.2km,

Saturday – Up and At ’em again.  Spinning at 9:30 AND… I needed to catch up yet again on the Burpees, Planks and Push-ups challenge so that was an additional 70 burpees, 70 push-ups and 3.5 minutes of planking after my quads were already set on fire in RPM class.  Go big or go home, right?   In the afternoon I walked 4km into town, not only to get my steps but to take care of an errand that needed to be done.  For the rest it was a bit lazy.  My house is a tip and I don’t care at the moment. 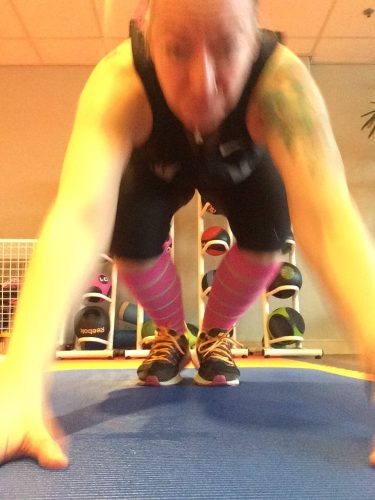 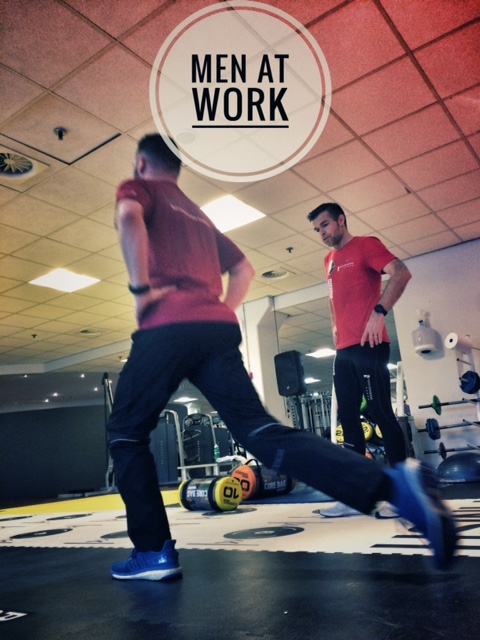 Of course Ron and Vincent were busy at the gym too!

Sunday –  No wonder I’m always tired!  I have packed so much into this weekend!   I had a date with my friend Yvonne and her mother in Amsterdam AND I really wanted to run, so I got up early (7:30) and headed out at 8:30 to just do a nice easy round.  It was so nice out!  Cold but the sun really started to shine.  Unfortunately it was also icy and I was running mostly along the dike so the paths were not really cleared for traffic (no cars go out there where it was icy, usually just bikes and people walking their dogs).   I meant to do 10KM, it ended up being 11km. Slow, but felt really good!   After I got home I quickly ate something, showered and got ready and I was off to Amsterdam.   We had tickets to see “The Complete Works of Shakespeare (abridged)” and it was HILARIOUS.  This show has been playing on the West End for some time in London and they’ve been doing the dutch version for a while now (we actually saw it on the last day).   I was a little bit worried that I wouldn’t get everything (Shakespeare is hard enough in English, let alone in Dutch!), but that really wasn’t the point.  You can’t really do Shakespeare in 2 hours with only 3 actors without it being a complete slapstick.  I got what I needed to get and I got the humor so I’m really happy with that.  Sometimes I actually realise that I do speak this language fluently!  I should stop doubting myself!   After the show it was back on the train and back home.  Ron was running on his own, so we met up at the train station to drop by one of our favorite pubs.  Quick drink and then back home.  Once I got home I started preparing a few things to have a smooth transition to go to bed and we settled in for an episode of Suits to close out the weekend. 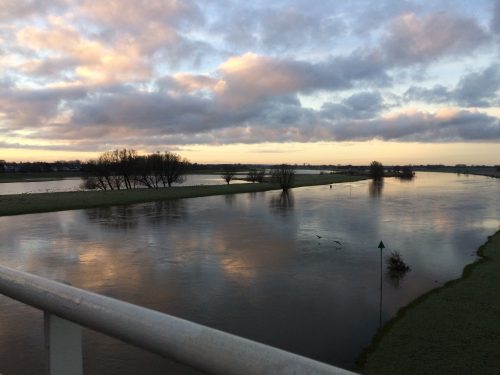 the sun’s come up over the Ijssel River 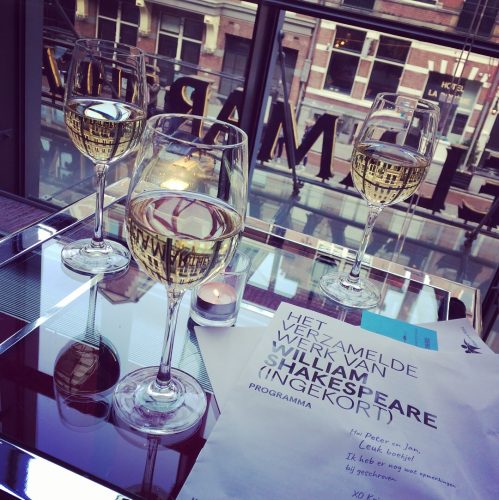 oh waiting for the show in Amsterdam to start is just dreadful!

Food Logging:  nope, didn’t happen at all
No Junk at work: Not achieved – had cookies on Weds and Thurs. Not a big deal, but I don’t want the junk and I am working on figuring out the triggers (could be TOM)

Goal for Week 4 is to get back on track again and get my lunch walks in.  Food Logging and No Junk At Work is on the menu.

How was your week?  Have you ever seen two movies in one day?  Are you doing Rachel’s Challenge? Still surviving the winter?