This week is the last travel interruption for a while so the last travel + eating challenge!  Obviously if I am home and following a schedule and my food plan then I have a higher chance of being successful with my weight loss goals.  Traveling is something I choose to do and it’s really a luxury problem so I can’t complain too much.  This time around we were headed off to Spain – my dad and stepmom had been on a cruise and then decided to stop off in Spain for a bit – San Sebastian, Madrid and then Málaga.  Since we had already been away (and the travel budget slightly depleted) in Liverpool for 5 days, we decided to just go for the weekend to at least see them for a couple of days.   I have never been anywhere on the Costa del Sol, but knowing how much I love Spain in general, it did not disappoint!

But first let’s look at the week –

Monday – AM Workout DONE!  I also decided late Sunday afternoon to take part in a cooper test offered by Runiversity and this would be a good indication where I am at, for training purposes.  To my very pleasant surprise I had a +22m improvement from the last time I did the test (more than a year ago I think – I do not like doing the cooper test because either there is no improvement at all or the last time I had +7, which I consider pretty much no improvement).  Also was surprised to see my friend and dedicated cat sitter Gerrit at the test as well! 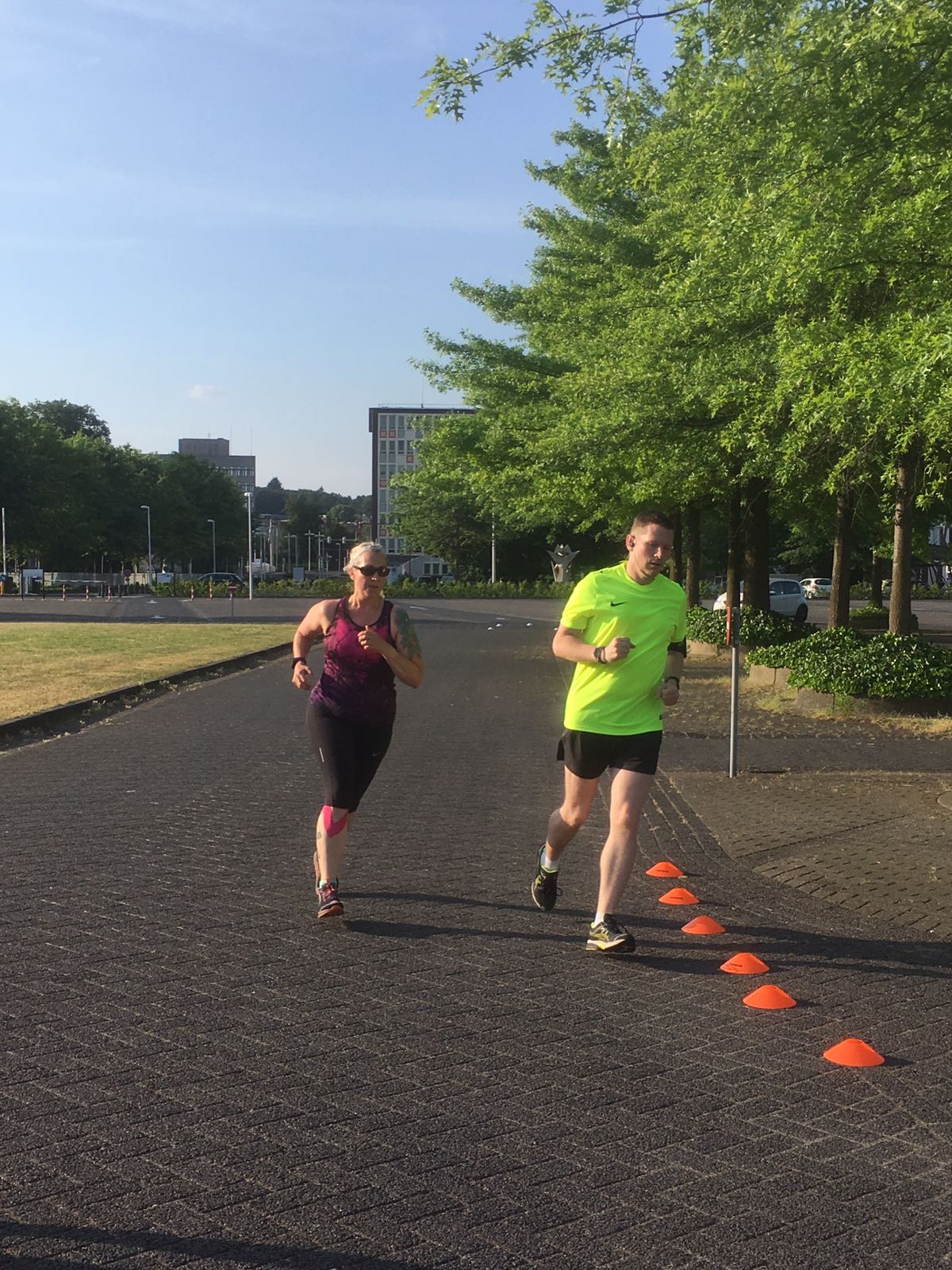 Gerrit and I neck and neck.

Tuesday – AM Workout DONE!  begrudgingly I may add, but I did it.  Had a very stressful day at work, went to the psychologist as well (nicely timed since I had a lot of stress in the office), then I had 3 clients on my last Tuesday night for massage. Of course I biked to and from the Health Center giving me extra bike commuting kilometers that day. 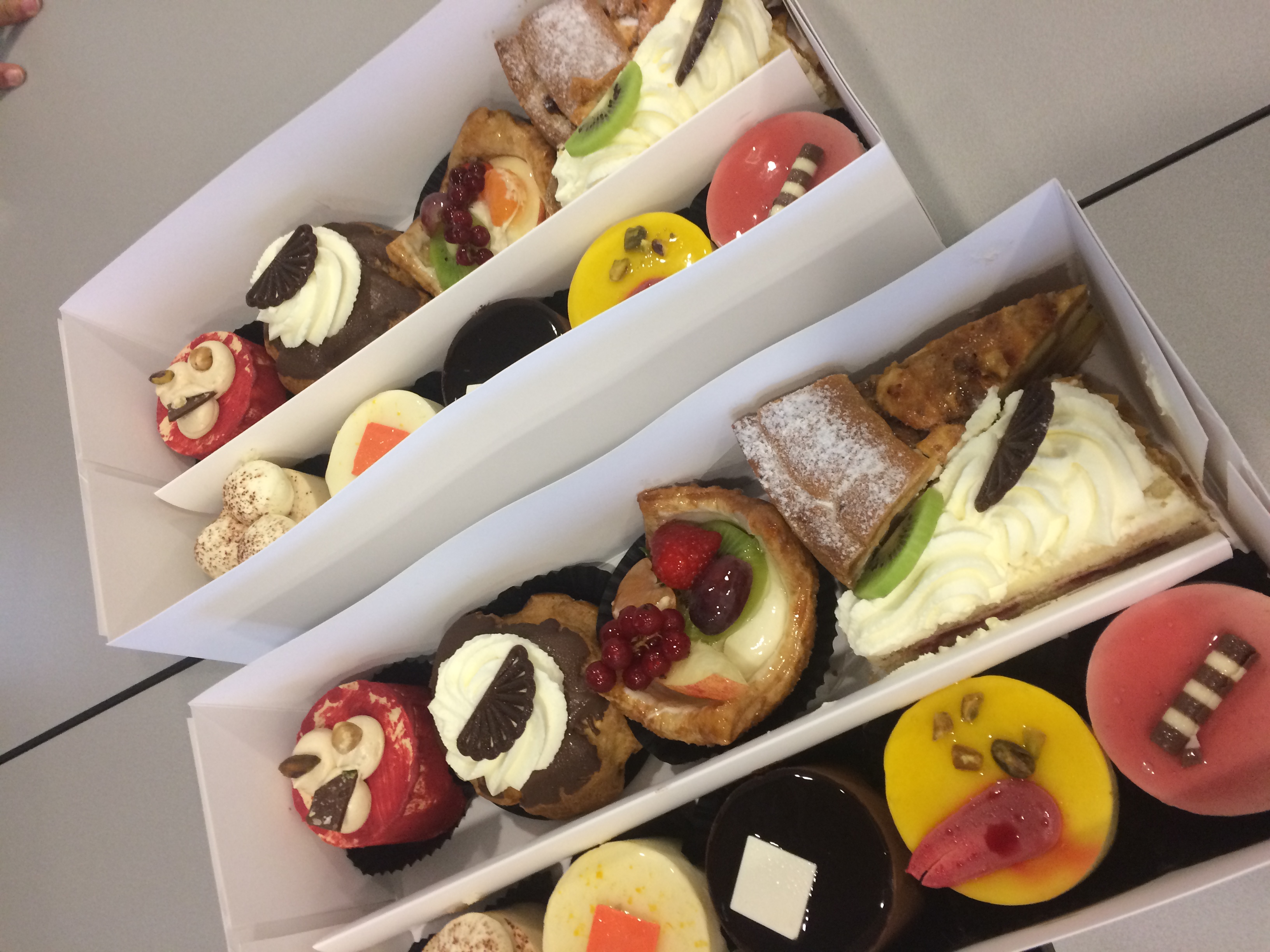 Wednesday – Rest day.  Tired, still a bit stressed from work.  No desire to do anything. So I didn’t.

Thursday – Ended up doing neither the AM workout nor bodypump; got up early for a 4KM run. Had a walk at lunch as well, and of course had to tidy up at home after work and pack for our trip. 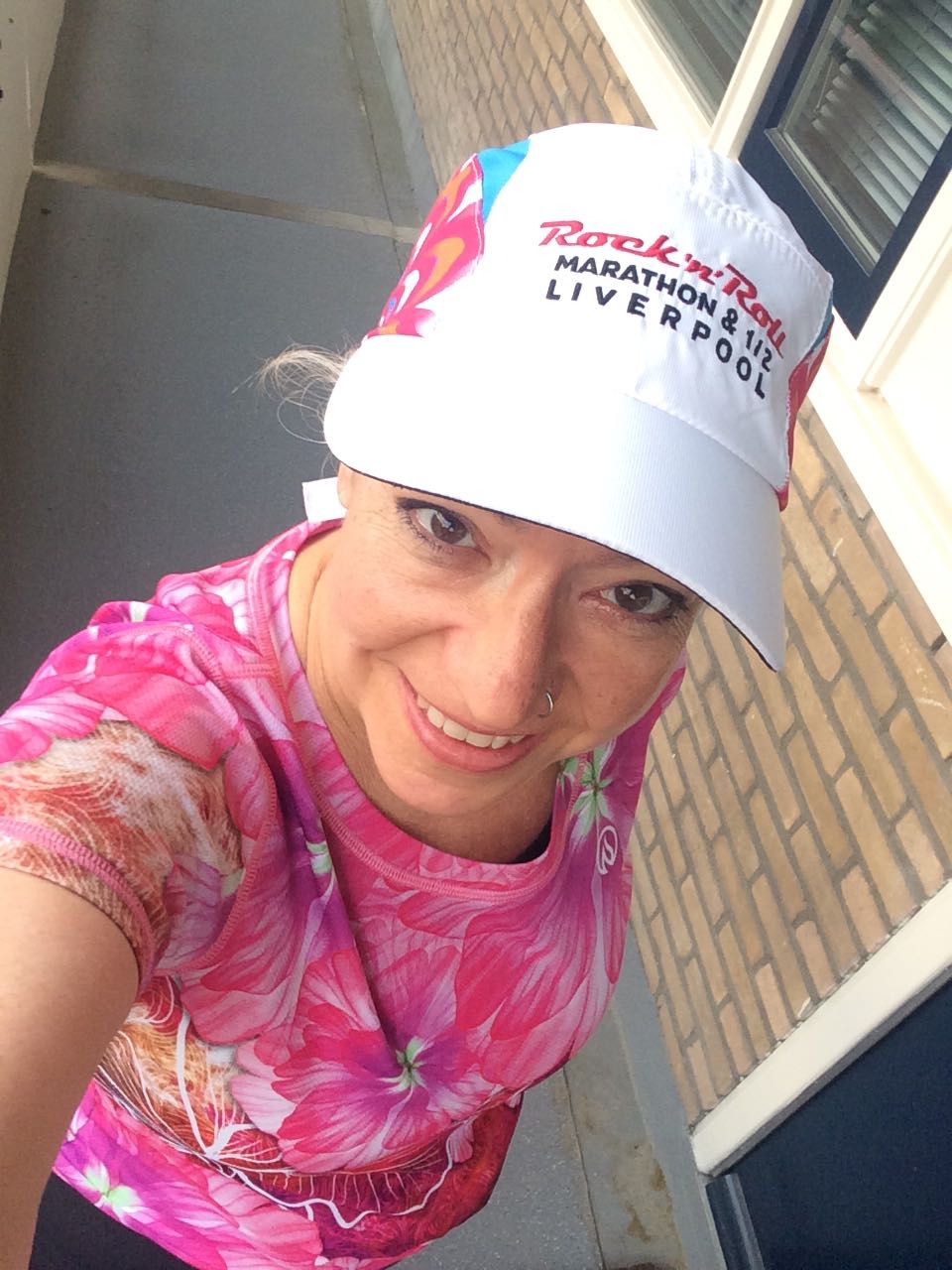 Ready to Rumble at 6am

Friday – We may as well have not gone to bed because the alarm went off at 2am to leave by 3:15.  Interesting ride to the airport in the pitch dark as well where we discovered our main headlamps were both out.  UGH.  (crisis averted but it was scary once we had no highway lights).   Flight was delayed as well but we still arrived around 10am, and met up with my parents at 12 for lunch!  How awesome is that!  Lunch, catching up and soaking up some sun.  Around 3pm we all agreed that a siesta was necessary.  We were staying only 1 min walk from where my parents were staying so we all walked back to our places together and then met up with them again at 8 for dinner.  There is a theme here.  It revolves around Food and Drink (and some sleep). 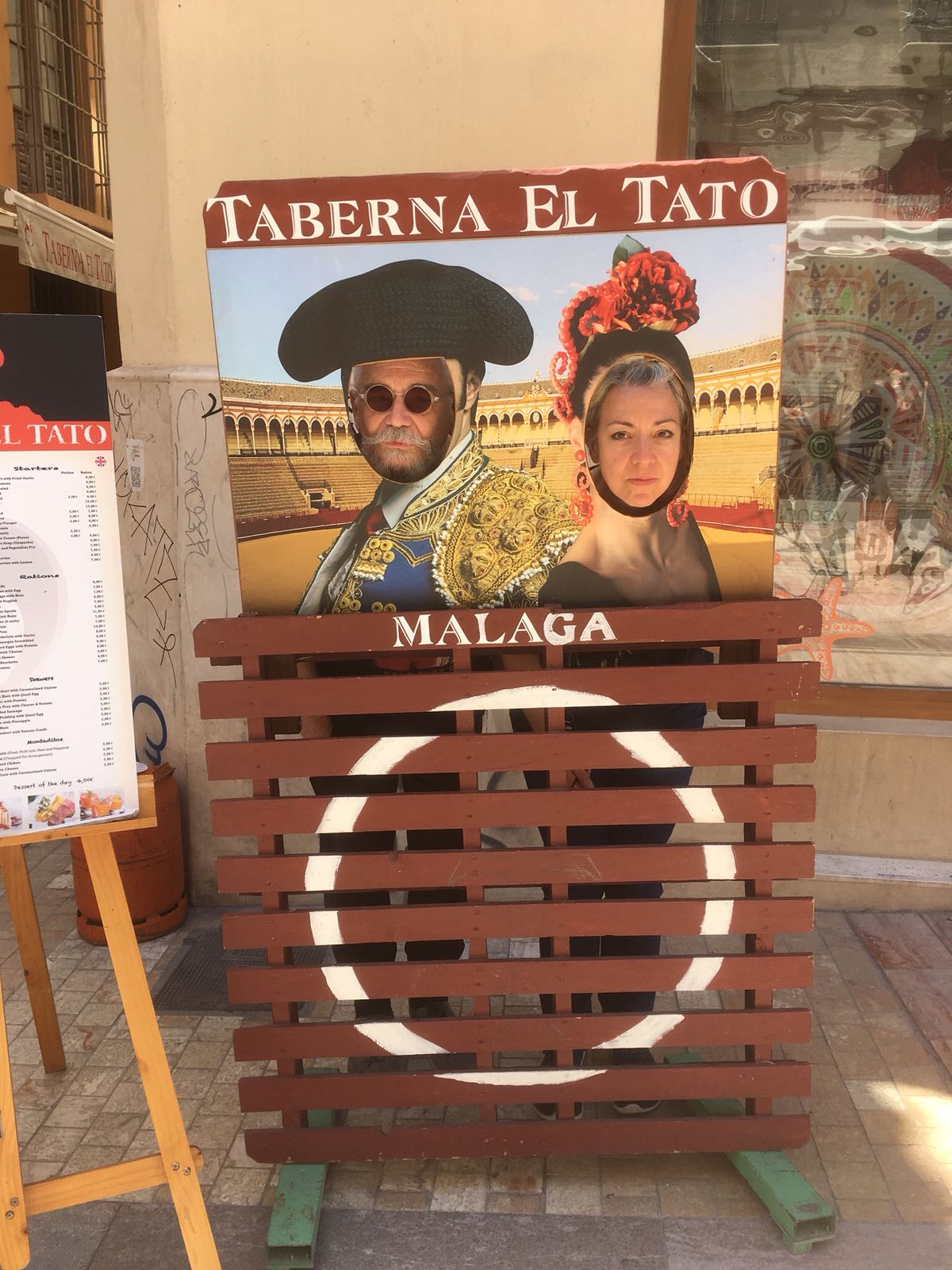 dad and I being silly

Saturday – Instead of lying in the sun we opted for an early morning run!  The evening before we thought it would be good to go and run a bit around the harbour and the beach and just see where the road took us.  Plans with my parents were for lunch so we had plenty of time.  It was beautiful, the temperature was perfect 17C/ 63F and there was a tiny bit of a breeze.  Plenty of runners out and by the time we got back it was already much warmer.  Once again my paces were much faster without even trying so I’m going to chalk that up to rest and already being a tiny bit lighter. In the end it was 8KM. 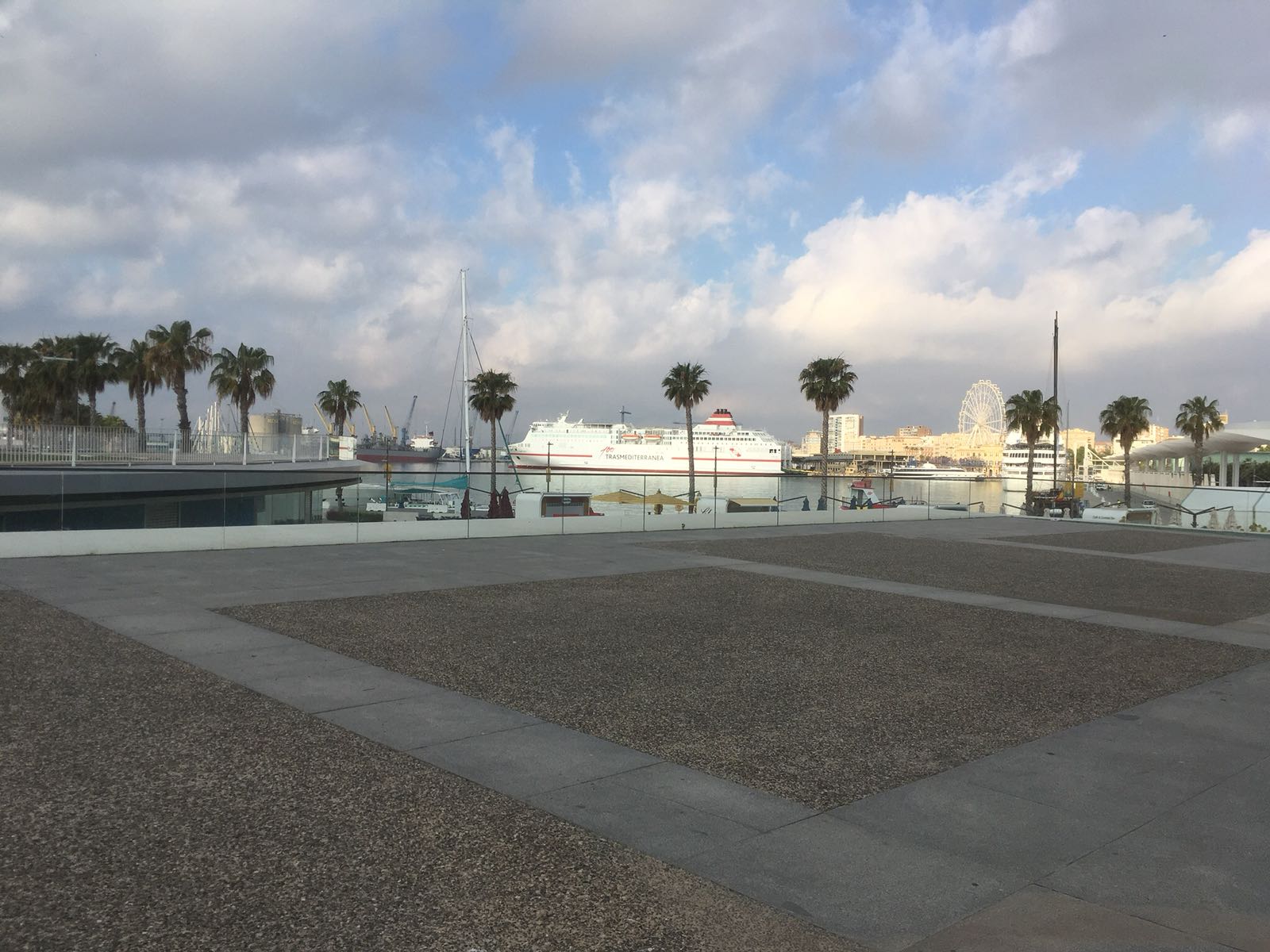 Once we were back in the apartment, we ate a bit, had some coffee and leisurely got ready to go eat again.

In the afternoon it was lunch, the Pablo Picasso Museum (he was born in Málaga) where there was also an additional Andy Warhol exhibition (I did both but I was the only one interested in Warhol).  My parents went back for their siesta and once I was done in the museum Ron and I went and had a drink sitting on a lovely terrace near the cathedral.   We just stayed out and then met up with them later for… you guessed it… dinner. 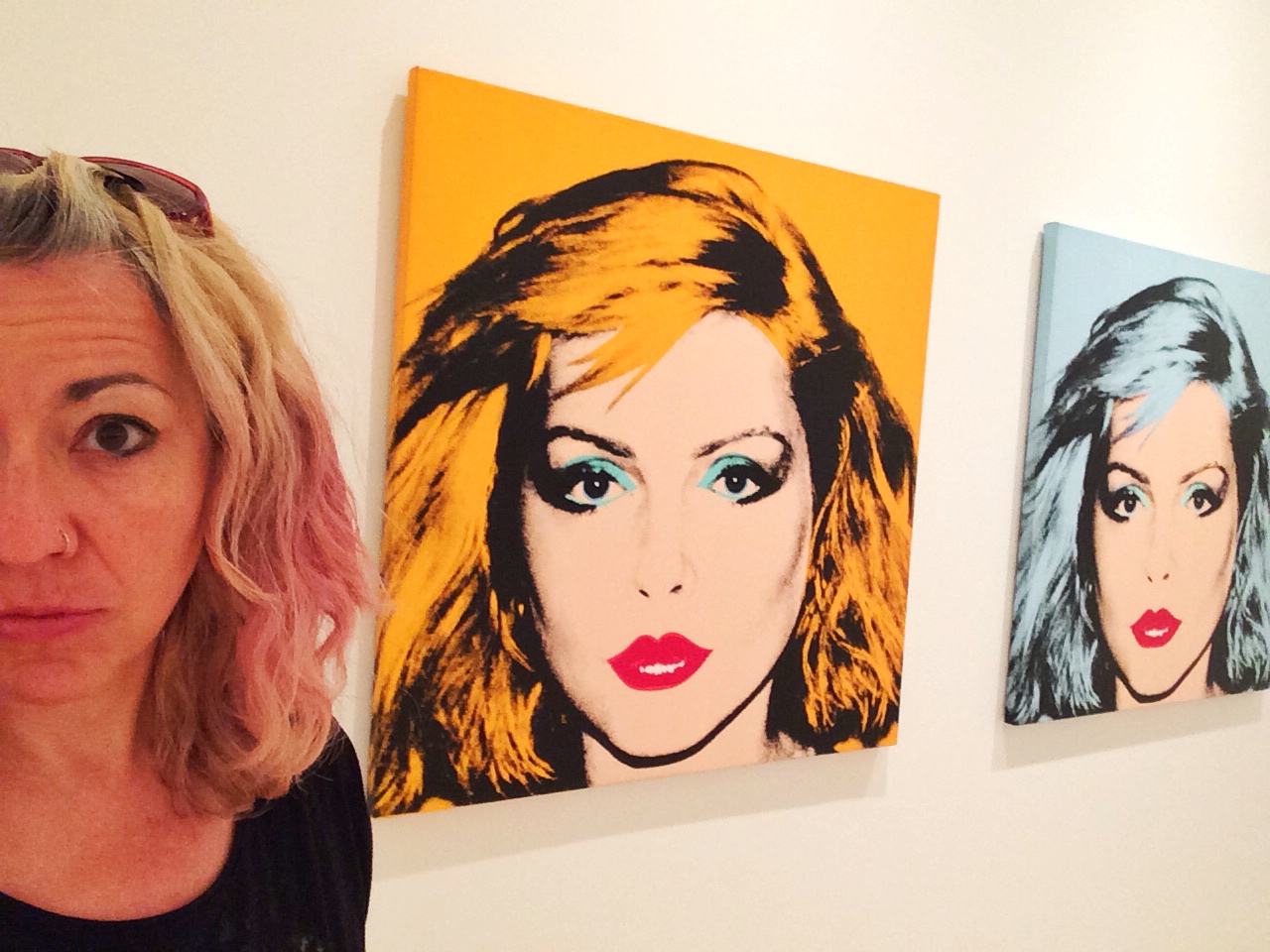 Sunday – we WERE going to go to the beach but … we loved the run so much Saturday that we decided to run again on Sunday.  Torremolinos is “only” 16KM  / 10 miles from Málaga, why not run to there and then take the train back?  (Fun Fact:  I have been a Soft Cell/ Marc Almond fan since the early 80’s.  A song called “memorabilia”  mentions Torremolinos, so naturally I *had* to go there)

It looked easy enough on the map.  It was a series of boardwalks, bike paths and normal sidewalks and then eventually beach.  Or so we thought!  Going out of Málaga was easy enough and it was pretty far along a boardwalk out of town.  There was a triathlon going on as well so we stopped in admiration, watching the swim portion kick off.  Then we had to start running towards the airport, but apparently the bike paths had either been changed or just not completed yet!  So at some stage we had to cross the highway!  Thankfully the triathlon WAS taking place – this was exactly where the bike portion was happening and there were no cars on this section of the road!   In the end there were dirt paths, rocky paths, sidewalks, half sidewalks, partially on the road (thankfully only for like 2 minutes) and beach that didn’t have a boardwalk so we had to backtrack and hit Torremolinos from another path.  But it was AMAZING.  Like, really, best morning ever!  But so surreal, because we were there, then we were on a train back and then suddenly we were in Málaga again like nothing ever happened! 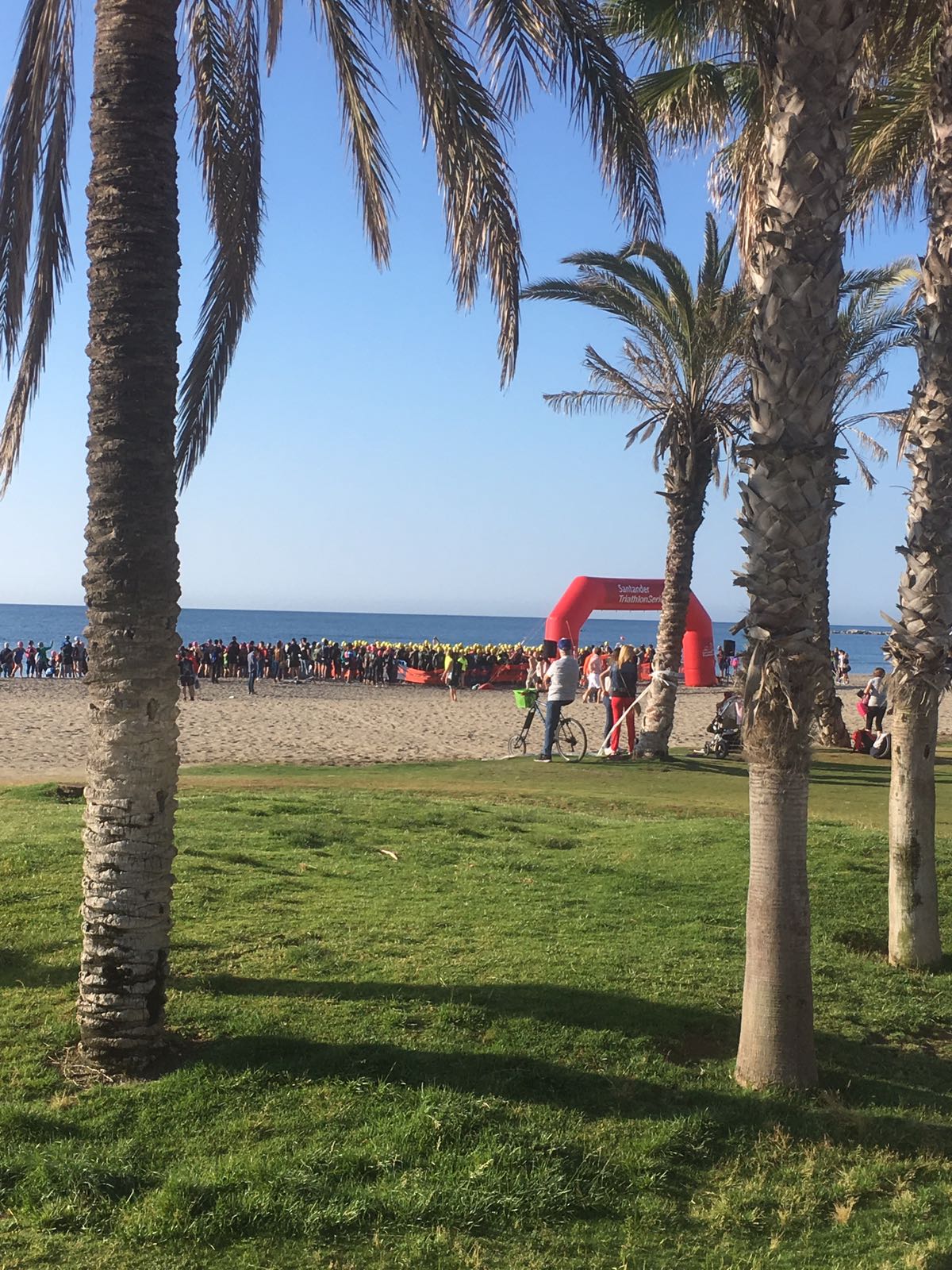 malaga triathlon – half and sprint 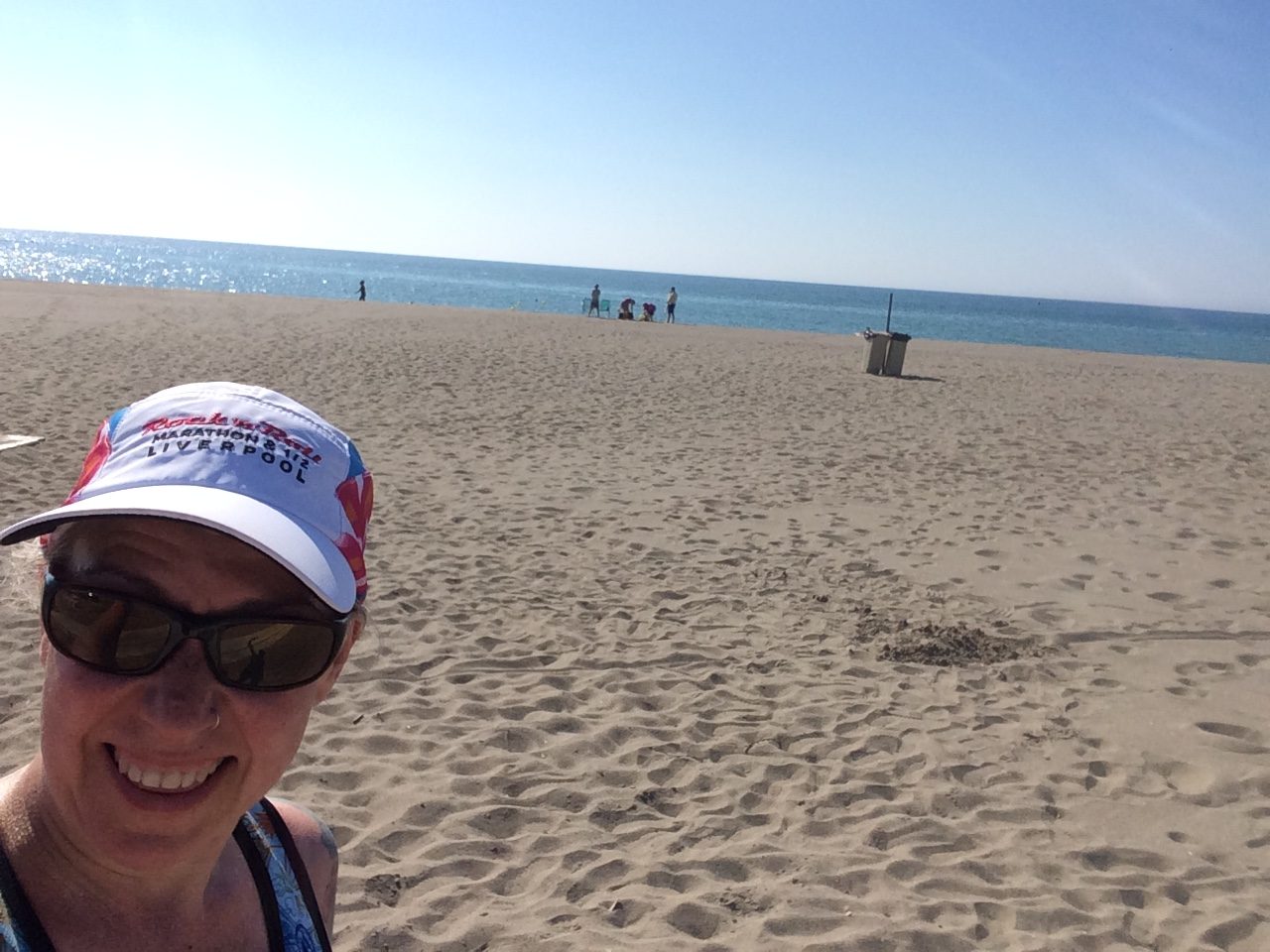 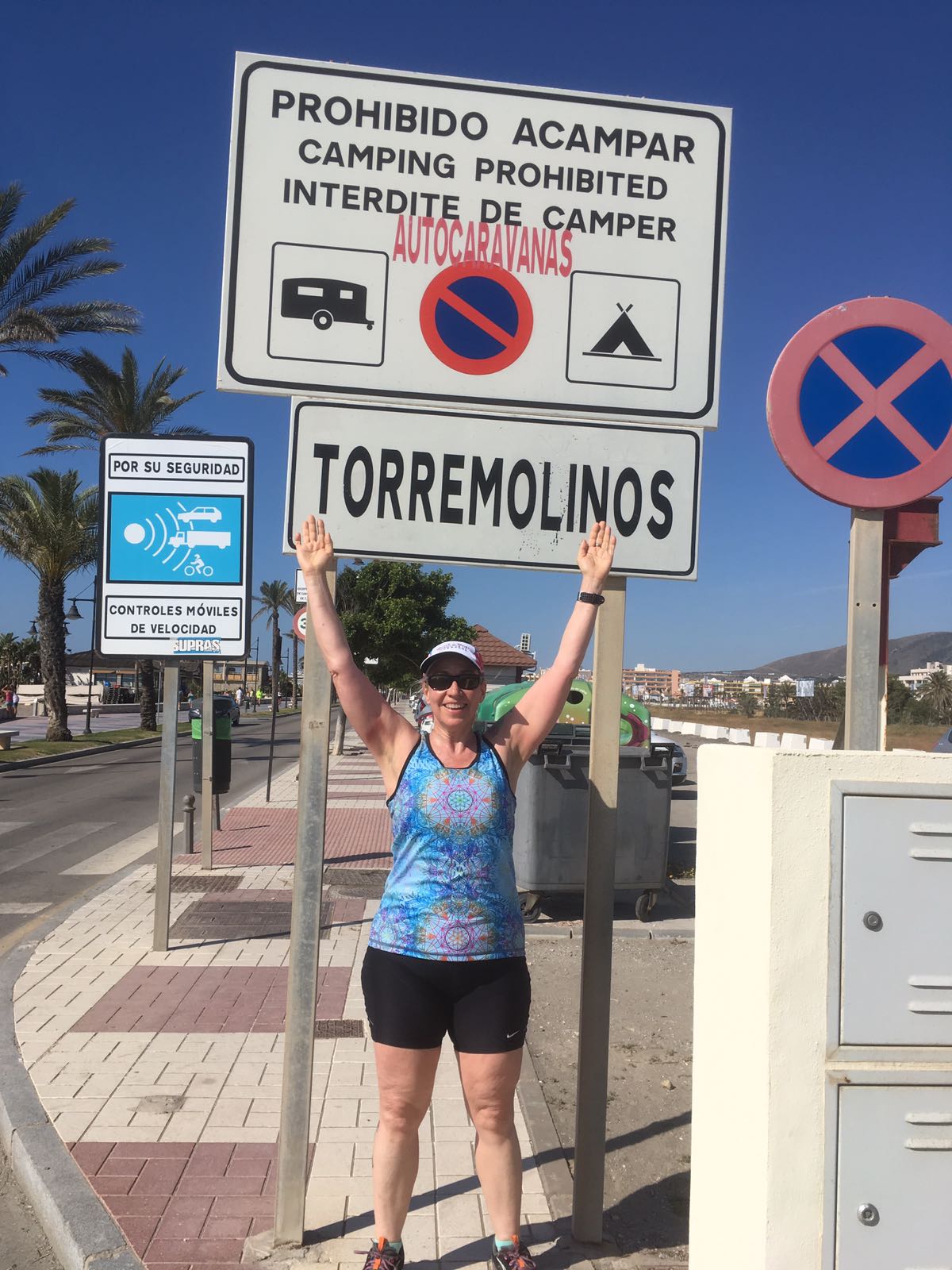 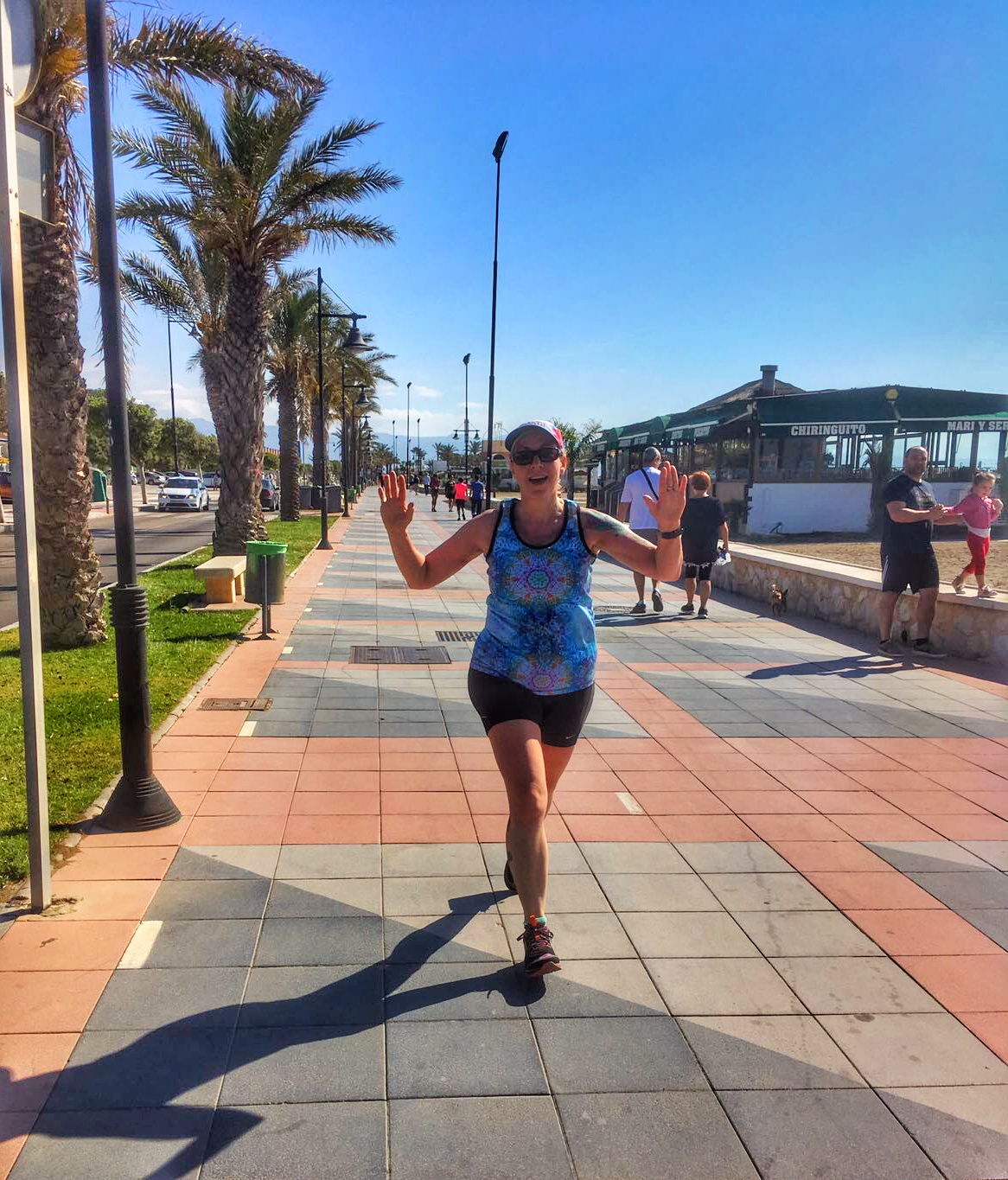 pretty much sums up how I felt about this run – happy, excited and a spring in my step! 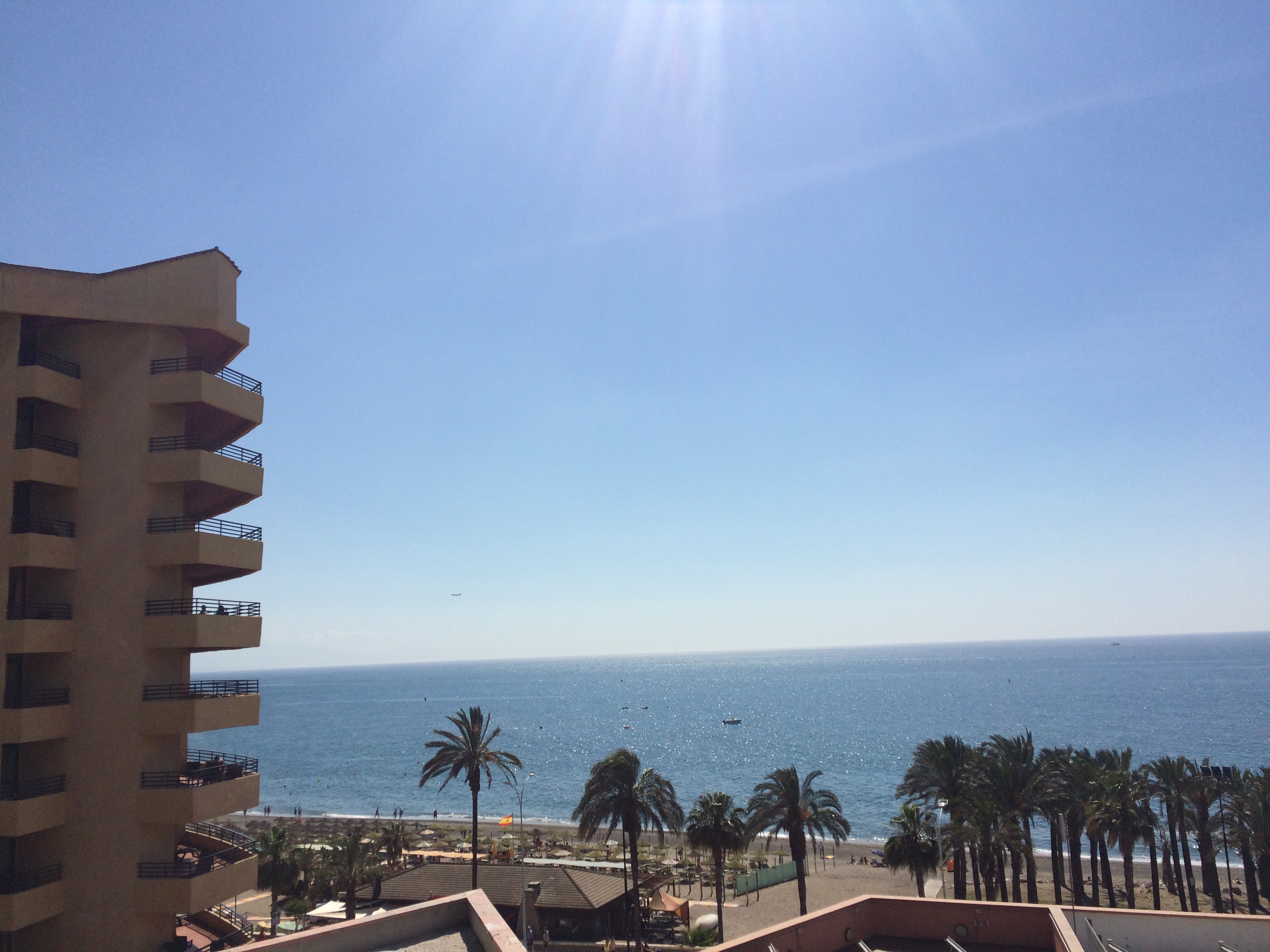 view from the top

We showered, changed and met up with my parents at 1pm and, you guessed it had lunch and then later made our way to Centre Pompidou to check out the latest exhibition there, followed by a beverage overlooking the harbor, a very slight siesta and… DINNER. 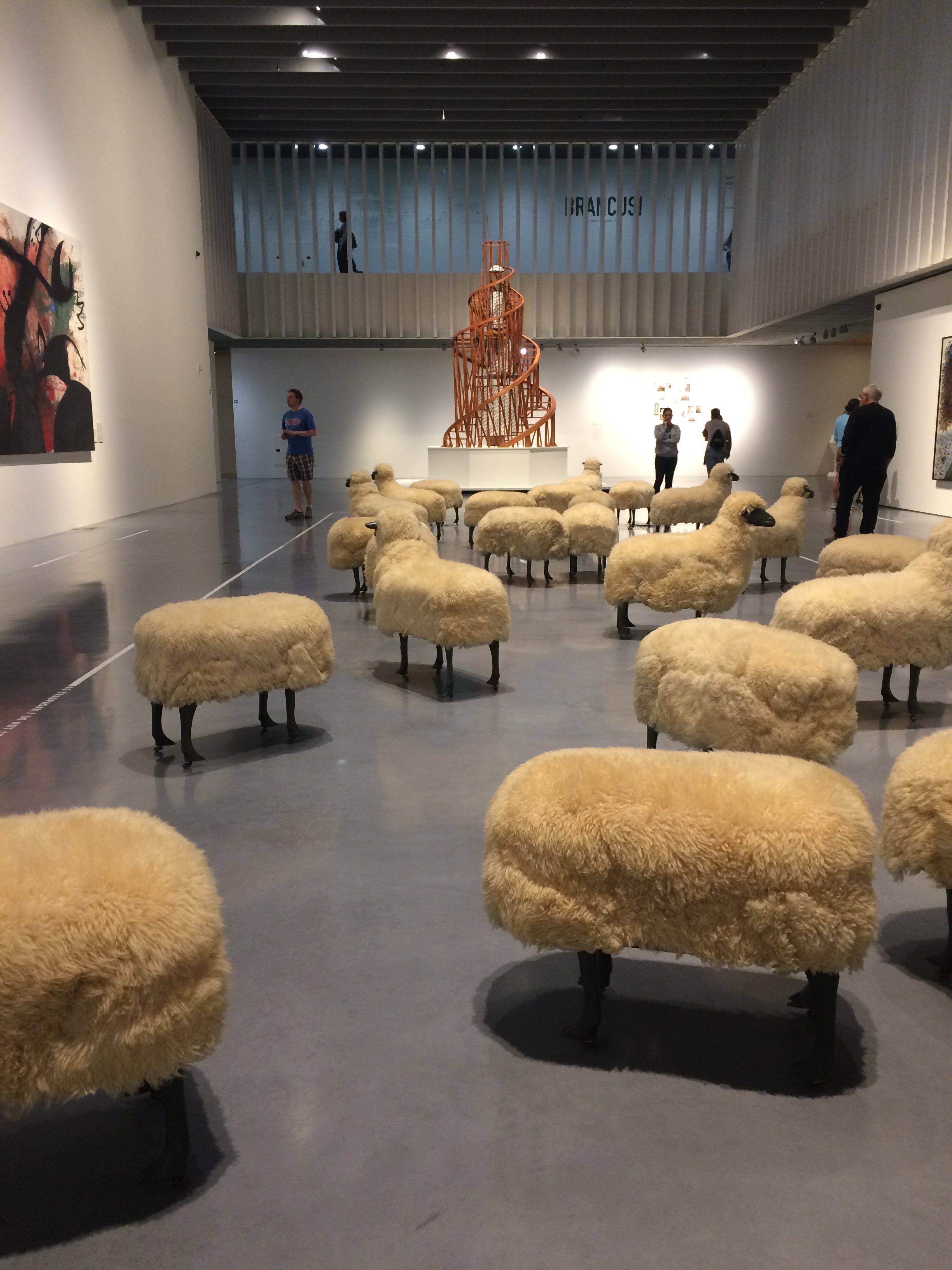 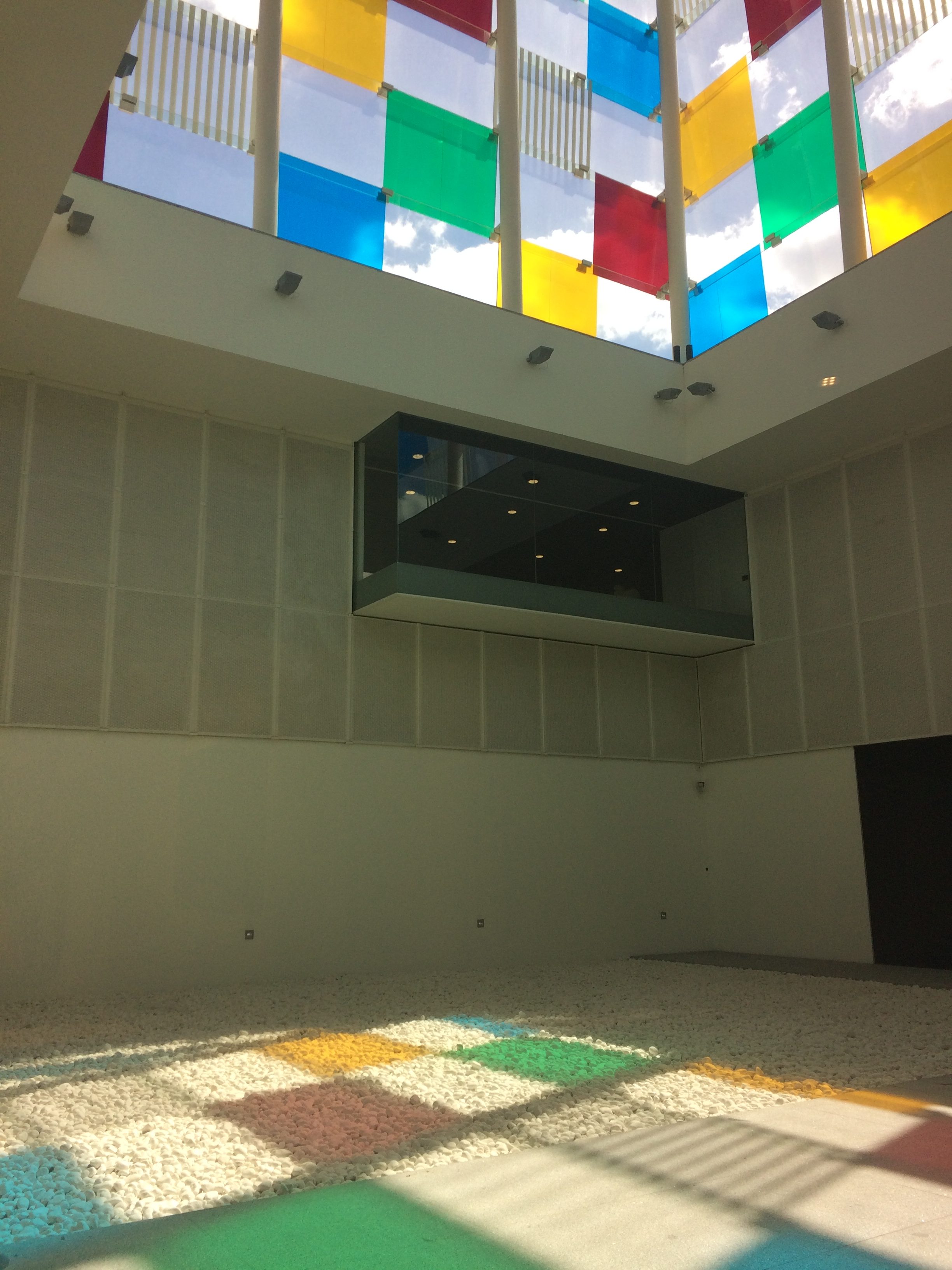 Reflection from the Cube of Centre Pompidou

Dinner of course runs quite late in Spain, so around 10:30pm Dad was in search of his last ice cream cone of the day (and Ron and I followed suit – though it was also my first one thankyouverymuch) and with cones in hand we all walked back towards our temporary lodgings and had to say goodbye until next time. 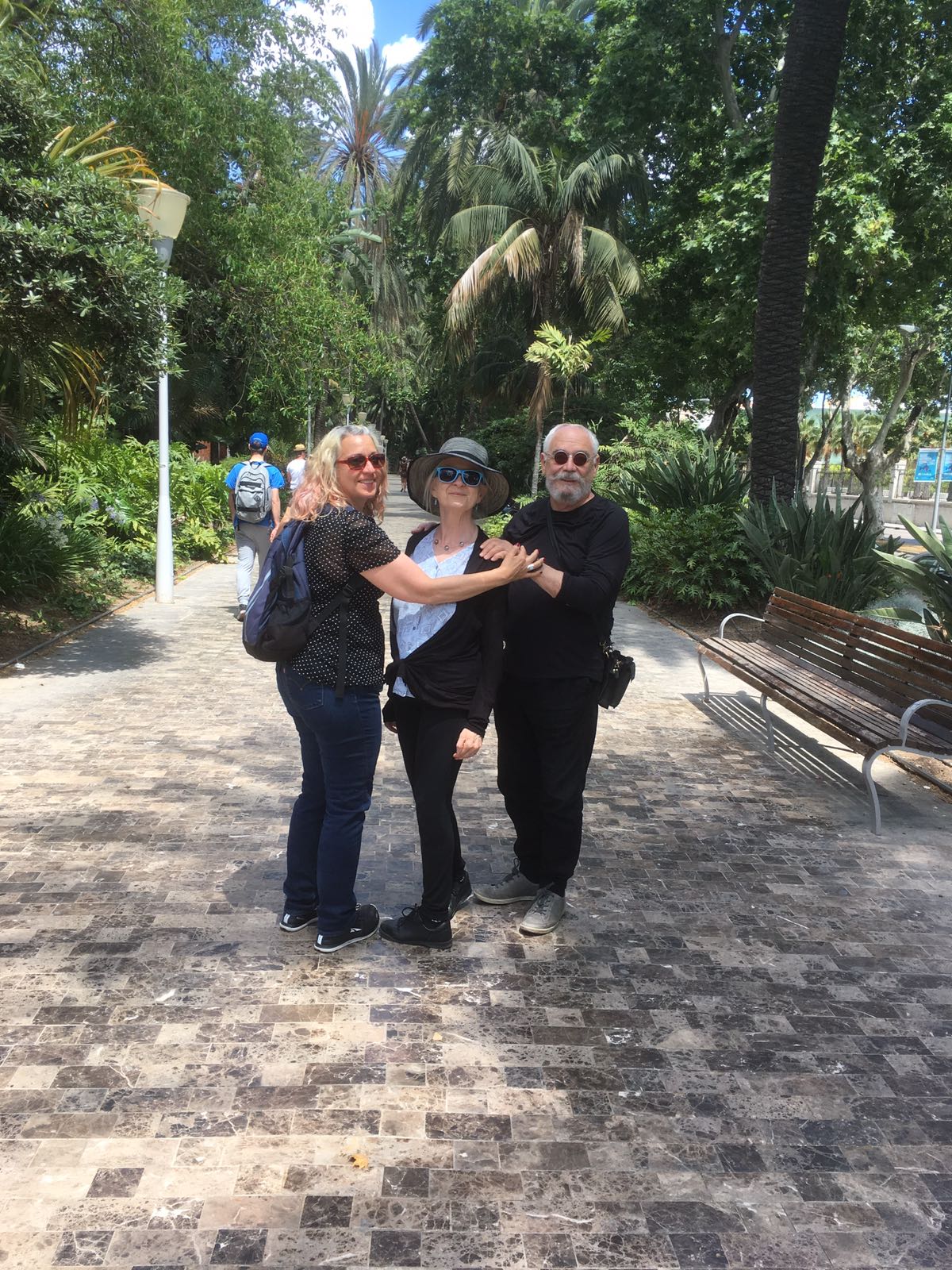 We had such an amazing weekend – and though it was short, after the week I had at work, it was just what the doctor ordered.  Plus, all those extra kilometers!  And feeling GOOD whilst running.  Total bonus.

Coming up Week 23:
I am leaving plans a bit open this week as it’s my last week before training starts officially for the Warsaw Marathon.

On Wednesday I’ll sum up May and touch on what I think went well and what could be changed/improved, and in general what my plans are this month.  Wednesday is Weigh-In Day of course as well but I’ll just touch on it high level so that you won’t get bogged down in all the details