What a great race! I really was so happy to run again after being “off” for five months. Looking back I’m kind of glad now that I was forced to take a break because I am really appreciating the ability to run so much more now. Last year it was becoming such a chore. I HAD to train. I HAD to make up the missed sessions. I HAD to complete the damn Half Marathon I signed up for which I clearly wasn’t prepared. Running should be a WANT not a MUST. It should be fun. It certainly wasn’t fun for a period of time, not with the pain or the pressure. I feel like a new girl, like I’m starting fresh :)

Last Sunday was the Egmond aan Zee Quarter and Half Marathon. Last year I ran this race and really enjoyed it! It was cold, but lovely out. I felt really pleased finishing it. This time was no different :)

But to go back a bit; I don’t normally drink much alcohol a few days before a race. I guess I just want to really focus on being healthy and not having a lot of extra toxins floating around so I really keep it to a minimum. For example, the night before a race I will have pasta for dinner (I know it’s silly – especially if I’m “only” doing a 10K, it’s not truly necessary to carb load, but whatever) and usually 2 glasses of red wine. I don’t usually drink alcohol during the week at all, so that means also not the Friday, So literally I’ll have had 2 units of alcohol the whole week before a race (in general I have around 6 or 7 units of alcohol a week. It may seem like a lot, but actually it was probably anywhere from 12-20 a couple of years ago. The “recommendation” for ladies is around 7 units a week or one glass a day. No I’m not justifying, I swear and I don’t need AA so please don’t do an intervention on me!). It’s just one of those rituals I have, like we all have, before a race – I like it and I don’t see the harm in it.

I suppose I don’t really need to tell you that I regretted it afterwards. I definitely did. I didn’t feel well, I was tired and very thirsty the next day. But I sucked it up, drank loads and loads of water, took some ibuprofen and eventually I felt better. I prepped my clothes and my bag for Sunday. Hubs made pasta and I had one glass of wine (drinking it very slowly) and then went to bed at 10pm. I needed to be sure to get enough sleep.

I woke up Sunday morning and started my race day routine. Get dressed. Get hair tamed and in a ponytail. Make and eat oatmeal. One cup of coffee. Last minute checks. iPod. Phone. Safety pins. Yep, everything. We got in the car and took off.

But I didn’t feel that well. My stomach was quite rumbly and I felt a little bit burpy. I wondered if this was going to be the race day that I would be ill and not able to run. Or I’d be like those marathon runners who finish will all kinds of stuff running down their leg. At some point we HAD to take a potty break. I won’t give you details, but I will say I felt better afterwards. In fact, quite normal. Phew, that was close!

I had already made arrangements to meet with Alinda and hopefully Donna and quite possibly Natasha; Alinda was at that point the only one of which I had a solid plan. We arrived in Heiloo probably 2 minutes before her train arrived! How exciting to meet the Sugar Runner in person!!

We recognized each other right away, both in pink skirts :) and chatted all the way on the bus until we arrived by bus at Egmond. Then we chatted all the way (with the Hubs chatting as well) up to the start – I was late, it was overcrowded and I was nervous!! Eventually we just said goodbye and they wished me luck. We were off!!!

It was an absolutely gorgeous morning! The sun was shining (I had to borrow Alinda’s sunglasses!), it was cold but not so bad once we started. Running through town was going really well, though I felt a bit too fast. After 1K I literally ran into Donna! We run-hugged but we were both at a different pace so I hoped to catch her at the end. After another 1K I literally ran into Natasha! Again a little run-hug and quick chat but soon I was picking it up again. I knew I’d be slower on the beach so I wanted to be sure to make good time.

And there we were. At the beach. The tricky part is going down, the sand is soft and there are lots of imprints in the sand from the other runners. Once we were by the sea though it was fine – the sand was hard and it was just 3KM of running straight through up until we hit the dunes. Going up again, soft sand – that was a killer on the thighs. I found it slightly hysterical if not annoying that people were trying to run up the dune, flinging sand in other runners faces. Sand-which anyone??

Running up and down the hills in the dunes again was tough on the thighs, but I kept going – a lot of people were walking around 7 – 8 KM but honestly I didn’t want to stop, I knew I could keep going and that any “message” to stop was coming from my head and not my body. I had a very tiny “break” when I picked up a warm sports drink, but it was *maybe* all of 45 seconds that I walked.

At KM marker 9 I tried to pick up the pace again a little bit, got through the dunes and we started to go through the town again. The awesome part of this race? The last 500 metres is going ever so slightly downhill so I just completely cruised towards the finish line. My time: 1:15:35. Pretty much the same as last year, only 57 seconds faster. That’s WITH 5 MONTHS OFF!!

The worst part of the race? They ran out of medals!! Apparently many Halfers switched to the quarter marathon, something I find a little bit unfair if you ask me – all of those people still performed “better” (ugh for lack of a better word) than the ones who truly knew they could only do a 10.5K, so they got our medals. We should receive our medal by mail sometime in February.

So great day all in all, in fact a total success. Running, sunshine, beach, and having friends with you who support you. What more do you want from a race? Oh, yeah, the Bling!! Ha! Still was worth it :) 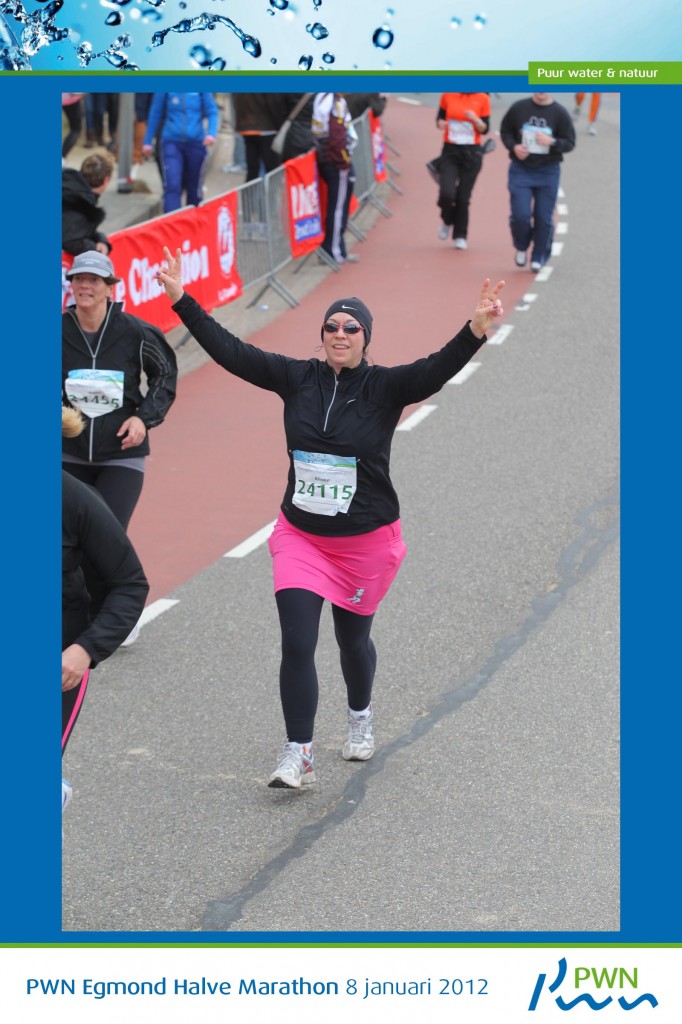