I know I haven’t written for a while and that’s a combination of too little time and not knowing where to start.

I have some stuff on my mind, I want to share it, I REALLY do, but I have to also be careful what I say here on the blog in case it could affect my every day “normal” life. Nothing to worry about, just stuff I am worrying about that is making me angsty!

Anyway I missed a couple of food fests because I also haven’t had time to cook. That’s what you get for having goals people! It’s OR I cook and go to the gym less or I go to the gym twice a week and run twice a week and do all that other food prep stuff as well. However, tonight, I decided to skip the gym to cook for my husband. Normally I get a buckload of recipes from WebMD in my email but nothing was inspiring me. I didn’t even know what I wanted to eat so I just googled “paleo burgers”.

I found this recipe at the Civilized Caveman and then tweaked it a bit.

Process:
1. In a large mixing bowl, combine your ground beef, honey, dijon mustard, sea salt, and pepper
2. Using your hands, mix the meat well to ensure an even coating
3. Once mixed, make 6 patties about 1/2 inch thick and set on a plate
4. They are now ready to grill
5. Grill over medium high heat about 7-10 minutes on the first side and 5 minutes on the second side until done to your liking
6. Serve over a bed of Sweet Potato Apple Hash below

Process:
1. Preheat a skillet over medium-high heat
2. Melt a cooking oil of your choice, I used coconut oil
3. Add your apples and onions and saute until the onions start to carmelize and turn brown
4. Next add your sweet potatoes and saute for 2-3 minutes
5. Now take some water, and pour in the skillet mixing well and ensuring nothing is stuck to the bottom of the pan
6. Cover the entire pan and let the water steam your potatoes
7. I diced my potatoes really small so all it took was one session of steaming all of the water off and they were done
8. If after all your water has evaporated your potatoes still aren’t done, just add more water and repeat
9. Once done to your liking, turn off the heat and add the cinnamon and mix well, then plate
10. Enjoy

and here’s what I did –
I took 400g of mince (lean, bio) and added 1/4 cup of bio honey and dijon mustard, a bit of salt and a bit of pepper. Mixed that up and left it to the side for a bit.
In the meanwhile I also cut up some broccoli and put it in the steam basket so we’d have a green veggie to go with our meal.

The potato hash was so easy. Take a giant (well, to me) sweet potato (this one was a bit over 2 cups, I measured on the scale and it was 230 grams), a half a red onion (had one leftover from lunch) and a granny smith apple and peeled and chopped that up. The sweet potato was in one bowl and the apple and onion in the other. Then I thought, “this is missing something” so I added a teaspoon of New Mexico Hot Red Chili and some of the McCormick’s Garlic Powder that I got from Fitbloggin. I heated up one tablespoon of coconut oil and started to saute the onion and apple.

After a couple of minutes I added the sweet potato in the pan. Then I had another thought “Damn. Bacon would be so good in this” so I added the rest of the lean bacon bits that we had in the fridge (75g) and let that cook with the potato for a bit. At this point I had formed up four burgers and put them in a big pan that I sprayed with some olive oil just in case.

Hubs got a burger on a sesame bagel with some rucola greens, some hash and broccoli. I got a loaded plate of everything but the bread. 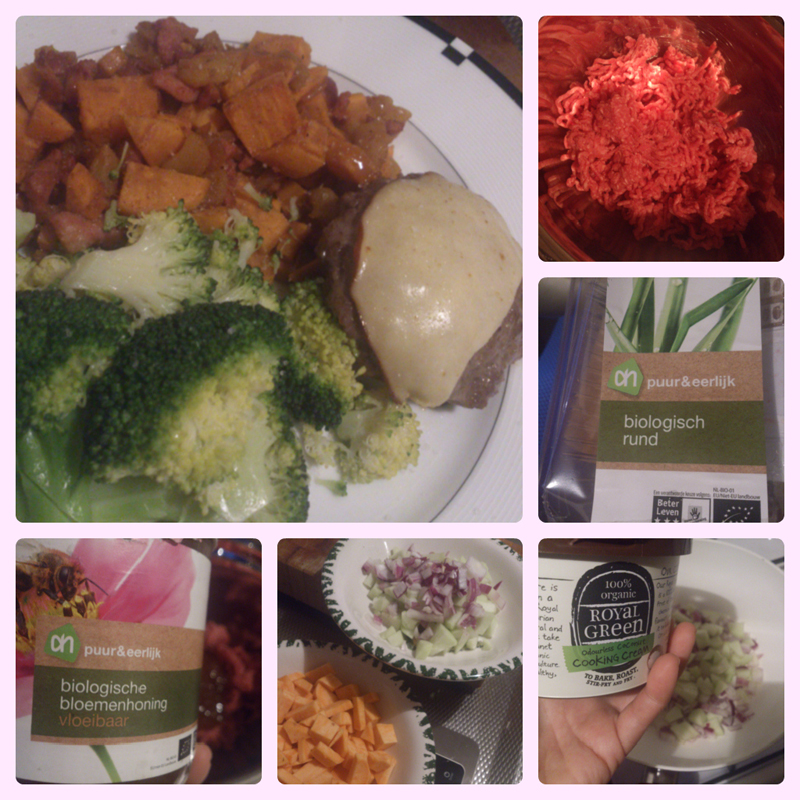 The burgers were absolutely delicious! I never could have imagined putting honey in my meat to make a burger but it was amazing. The kick from the Dijon was also nice, subtle but still had some “oomph” to it. The hash was amazing. I will totally make that again. I think the bacon and the chili powder really sealed the deal. The best part? It took maybe 30 minutes to prep and cook this entire meal. My kind of recipe!!

We did end up eating two burgers and splitting everything else in half (well, I took a bit of broccoli to put in my lunch for tomorrow).

Check out the Civilized Caveman for more delicious paleo recipes! And if you try this one (one or the other or both) please let me know what you think!

What do you do with your burgers? How do you normally eat your sweet potatoes?