On Sunday we woke up early to hit the breakfast bar on time. It wasn’t totally ideal but we did our best with carbs (cereal, toast, danish) and sweet things like honey and jam. We also had our carb-loader drink and prepared another to take with us. Since we were VIP we weren’t too worried about crowds, portaloos or checking in our bags. It was all sorted for us. 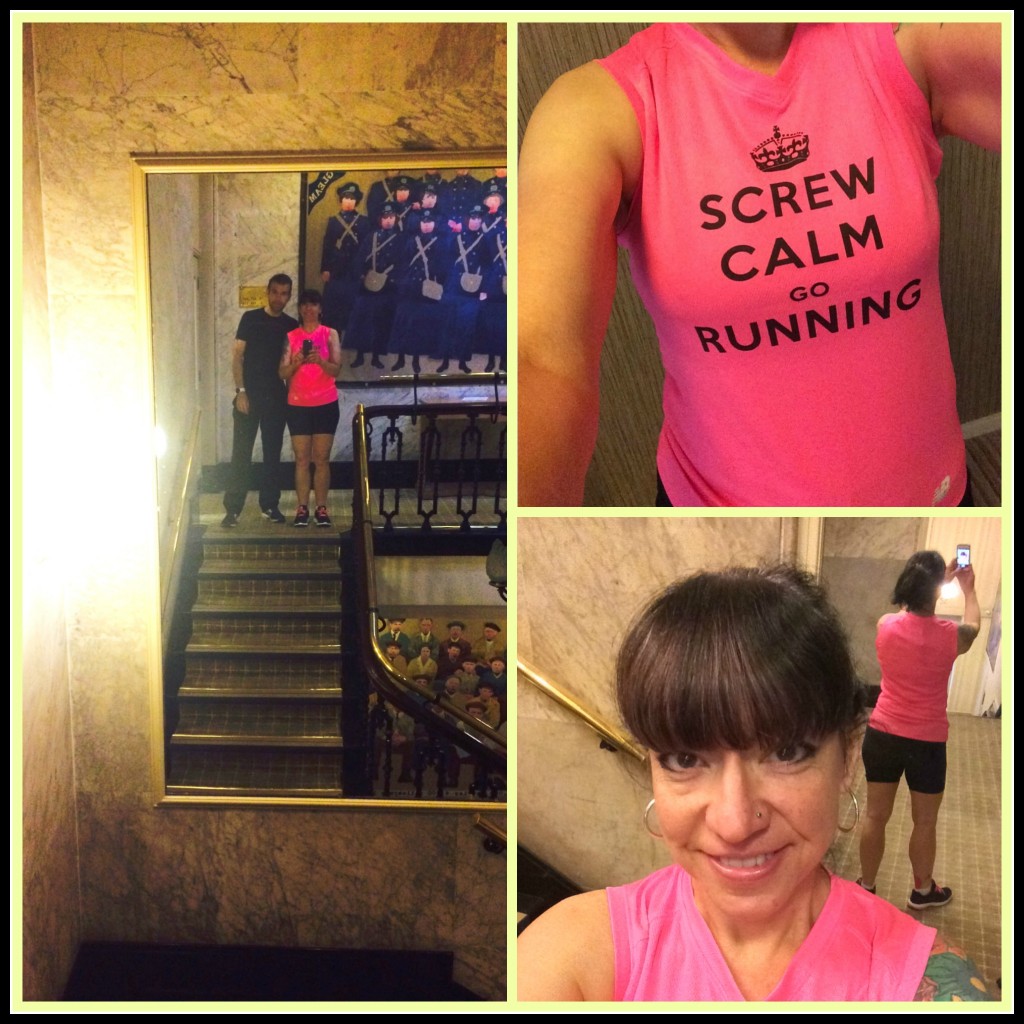 I think this should be my marathon shirt from now on.

I invited my friend Rob (we met in Paris) and he had Adrian with him, a friend of his from York. I wasn’t able to arrange it to far in advance, but when we arrived at VIP it wasn’t too busy so I asked Jessica if Rob and Adrian could come up to VIP with us. She kindly obliged. Rob and Adrian were super happy about it as well! 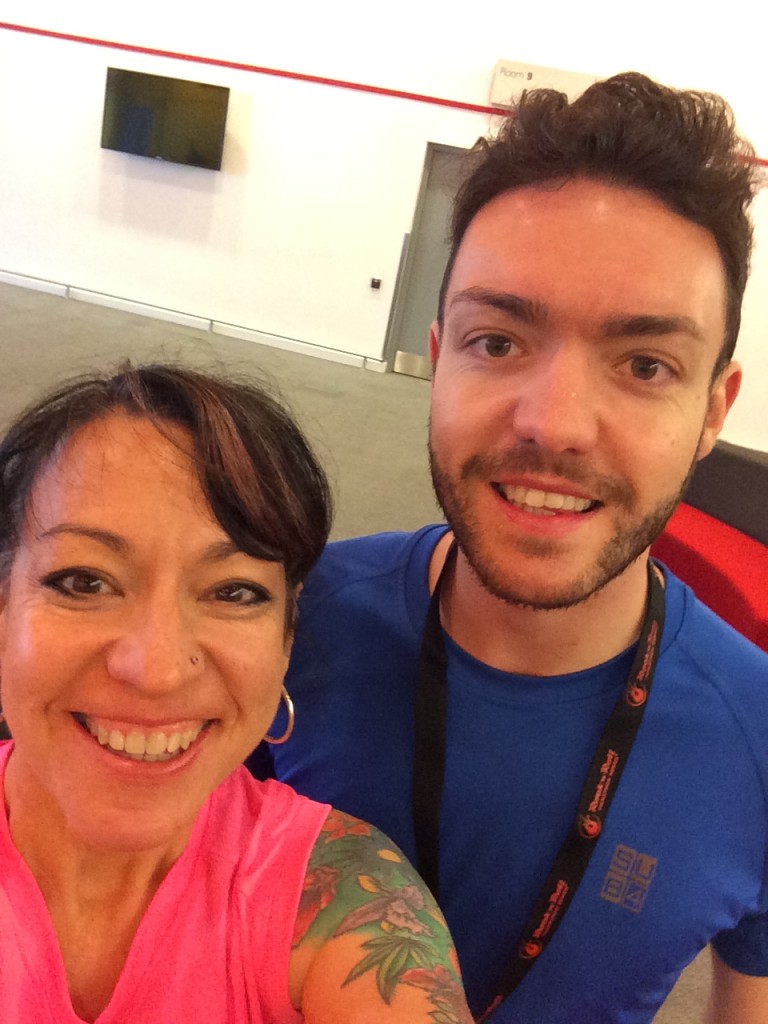 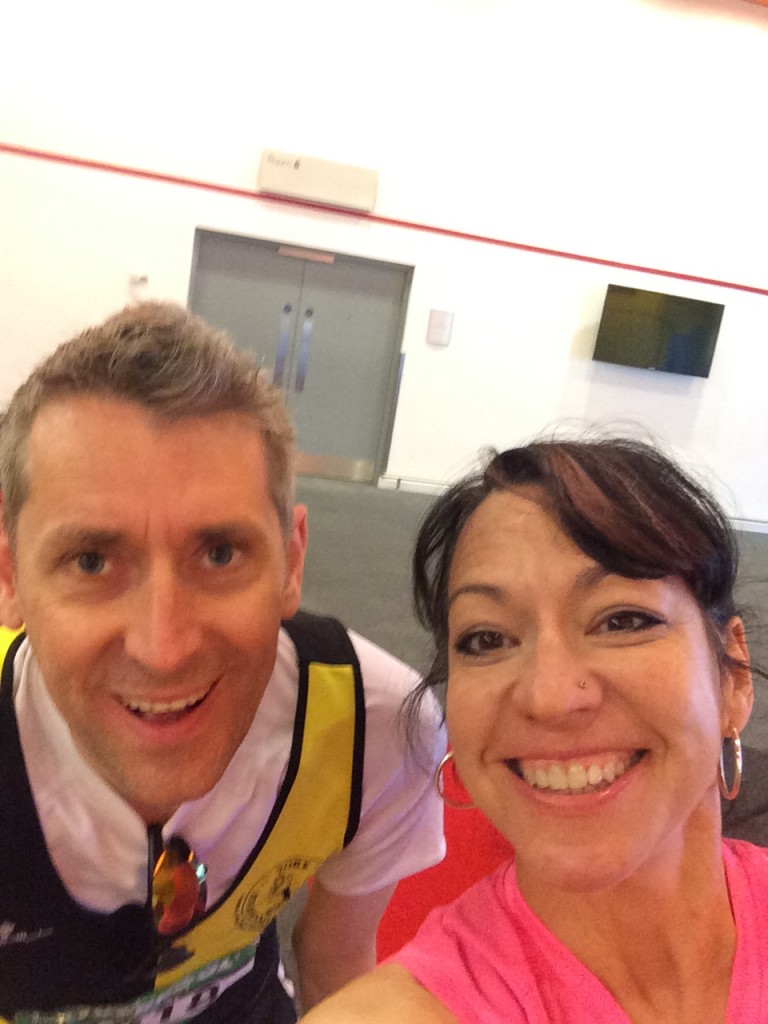 We saw Nicky and Marc there briefly (the beauty and brains behind Running the World)- the were running the Half – and the guys and I nervously chatted before finally heading out to the starting corrals. I was in 8, then guys were in much faster pens (the Hubs in the first corral, Adrian in the 2nd and Rob in the 4th). So by the time we went to the starting area I was on my own. 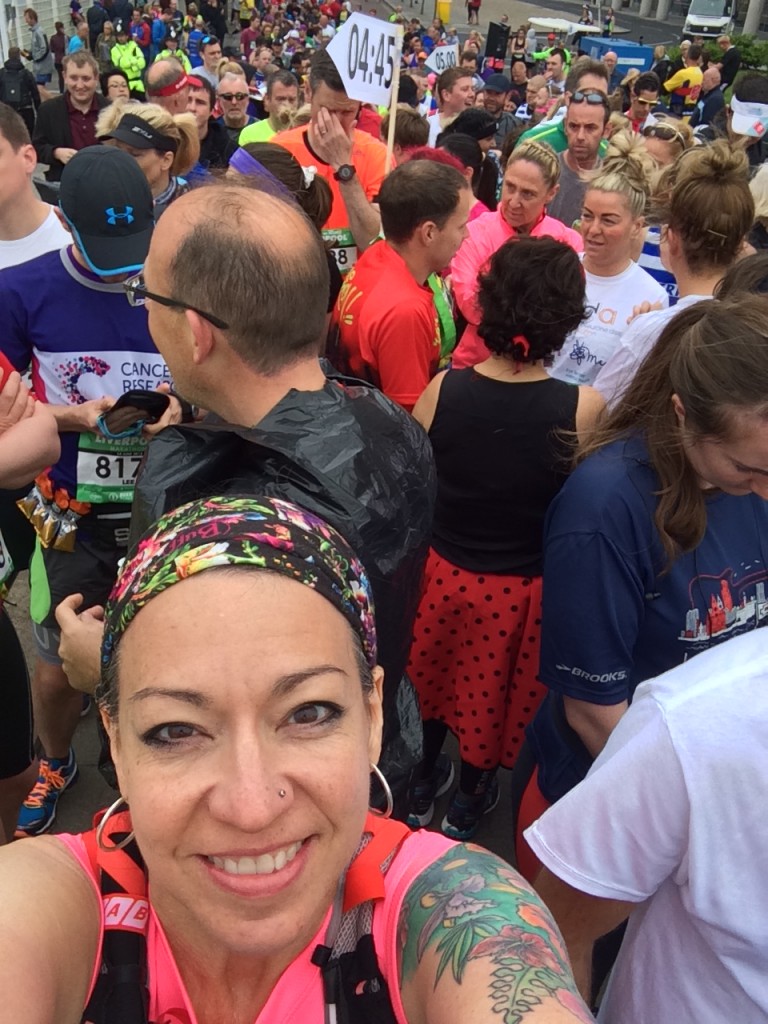 Holy Crap I’m really going to do this again??

I wish I was better at remember each mile. but the fact of the matter is, I’m so busy taking it all in with some crazy grin on my face whilst running that I forget some details. I do remember that I had to pee almost immediately after starting (yay?); I simply had had too much to drink before the start. At the first drink station, there were also loos (there were loos at EVERY drink station) so I made the first good decision of the race. I noticed later there were even queues to use the loos and I’m glad I went when I did.

We were so lucky with the weather – it really wasn’t too hot and not too humid either (it was supposed to rain but never did). Even with the hills (Hello. Why did no one tell me there were hills in Liverpool???) my pace was really good. At some point (I think around 7KM but not totally sure) I saw the first runners coming back around the other side of the road and they all had 1’s on their bibs so I had a good feeling I would see the hubs. And I did!! So, so awesome so see his smiling face!

Up one of the hardest hills were the High5 Support Crew – tons of students from a local university cheering us on and attempting to “help” us run up the hill! Was great though, even if no one carried me. There was a drum band, water and High5 energy drink. I stopped to snap a few pics and thank them for their support. 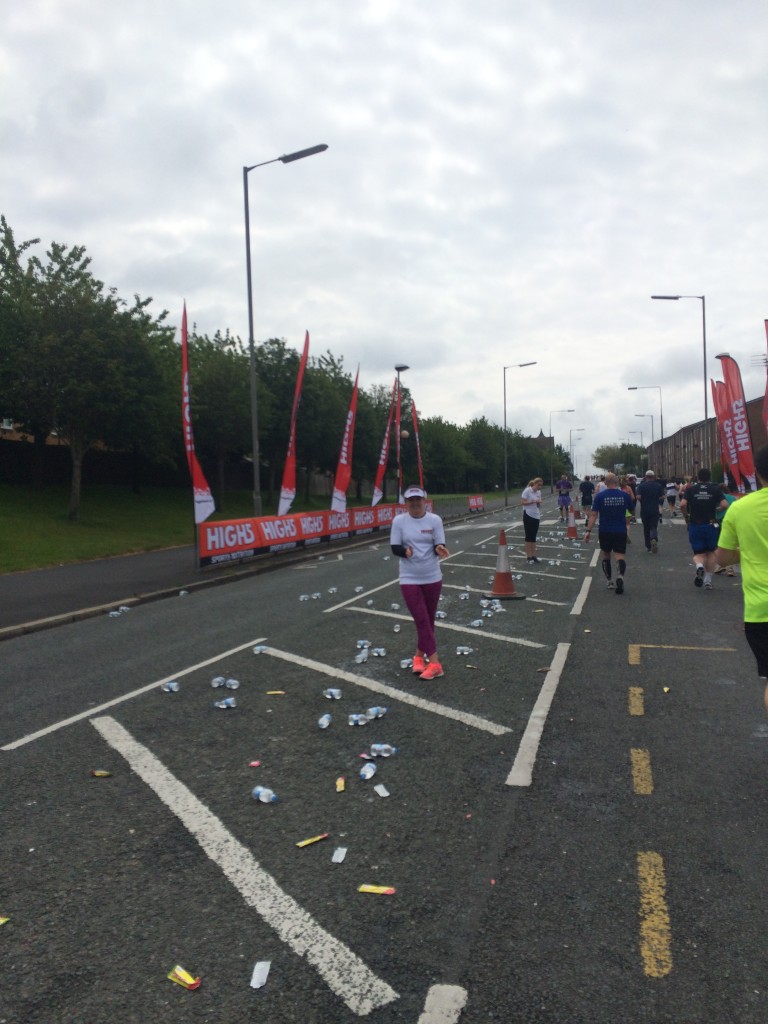 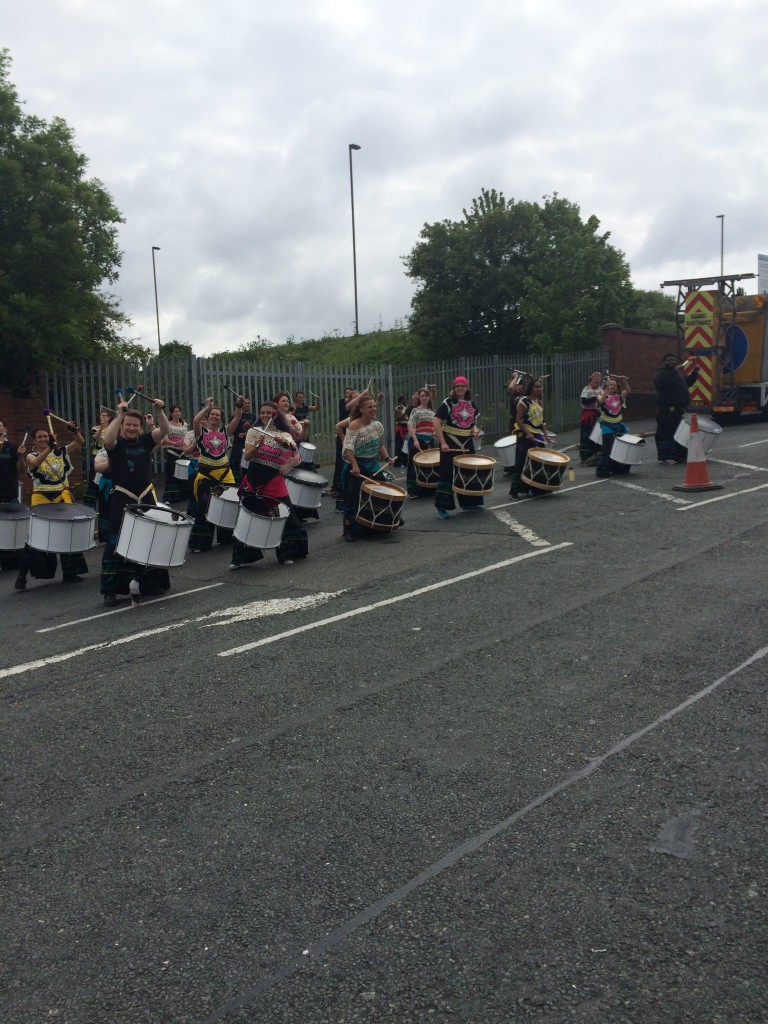 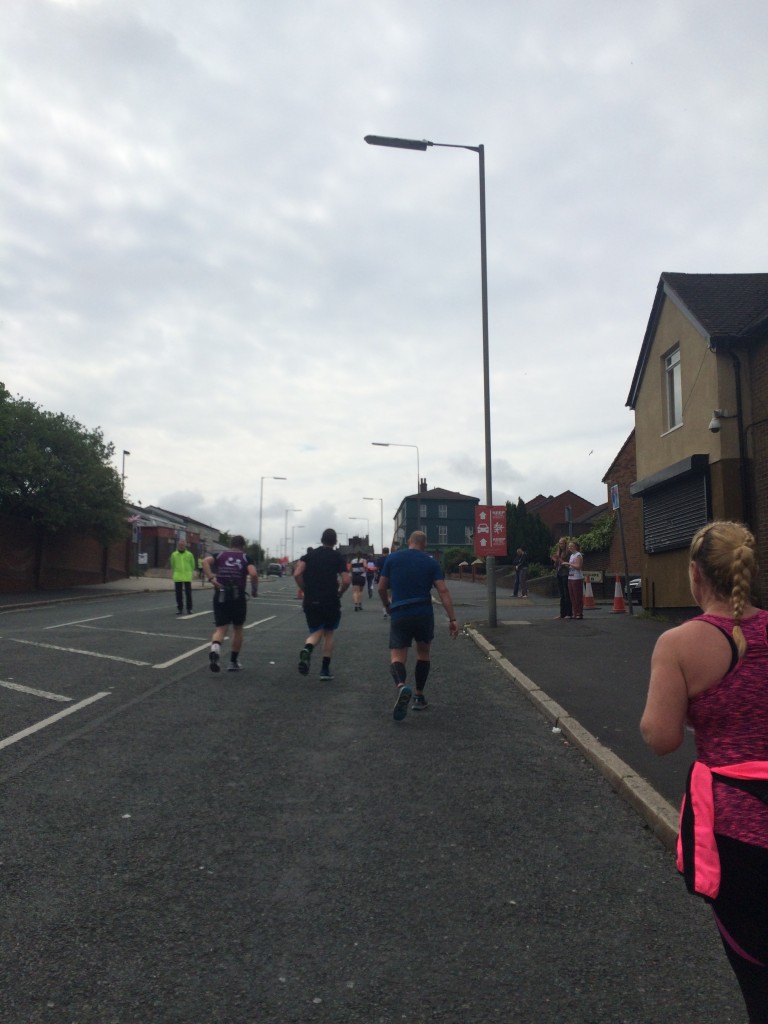 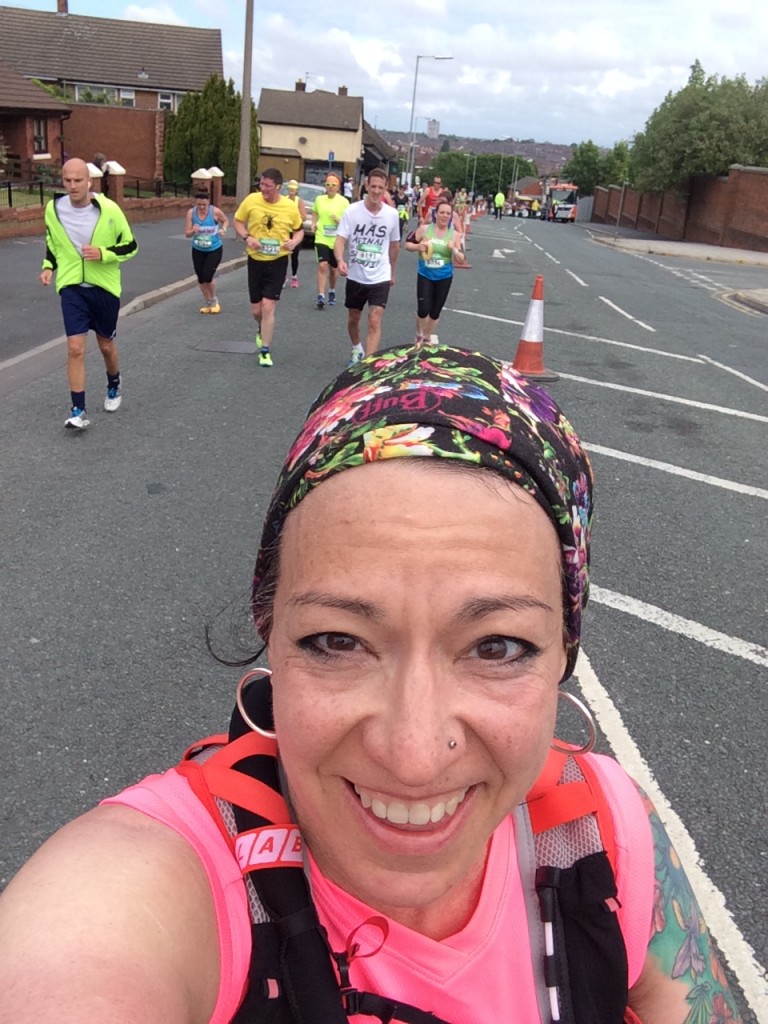 i am smiling but these hills are killing! 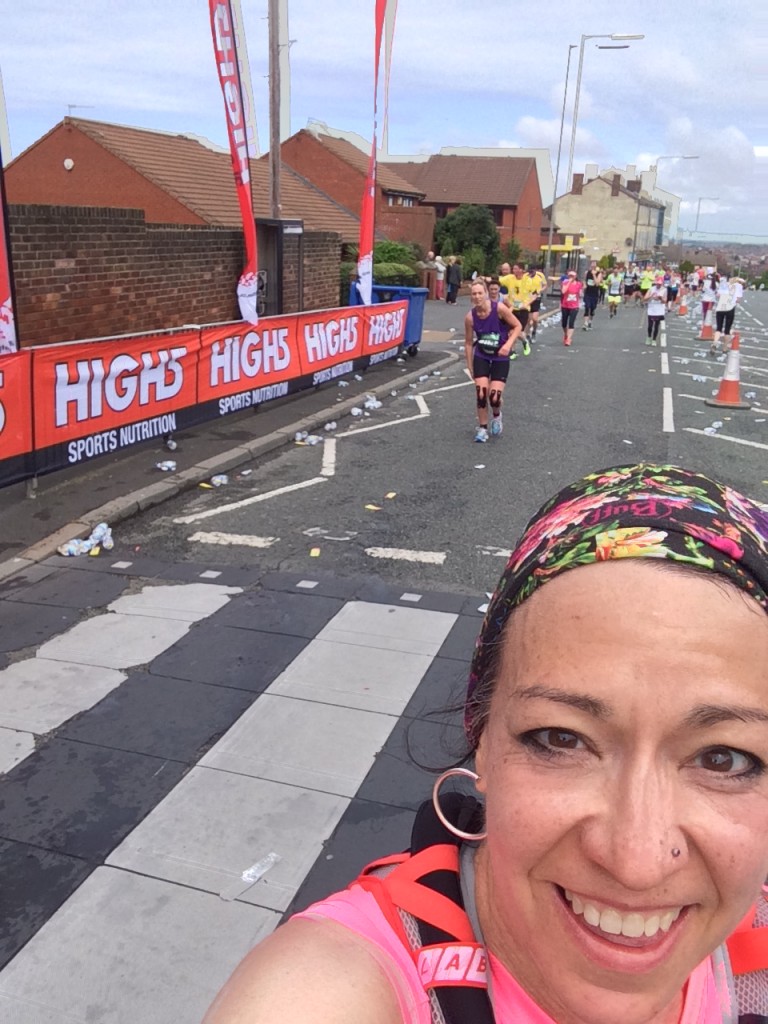 High-5 to the rescue!

Sometime around 10 miles (16K) I ran into Lesley! Lesley and I “met” on a spin-off group and we hadn’t had the chance yet to meet in person, so imagine my happy surprise that I found her along the way! We ran together until the Half Marathon point, where I wanted to stop and walk a wee bit. This was probably my worst decision of the race…

It was starting to get warm, i could see that others were also a bit affected by the temperature, but mostly I was just really feeling the hills in my legs. Luckily the bands along the way REALLY kept me going. And, something else I didn’t know about Liverpool? It’s so GREEN! We ran through so many parks (or maybe the same ones, I have no idea! ha!), it was just incredibly beautiful. 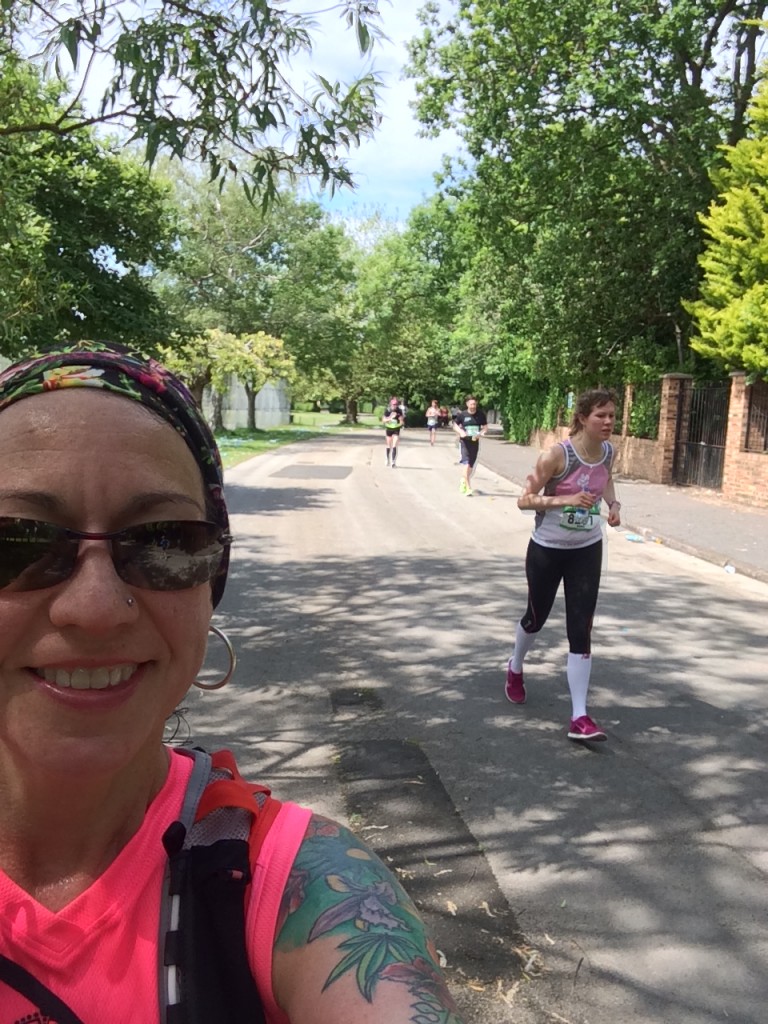 somewhere after the half 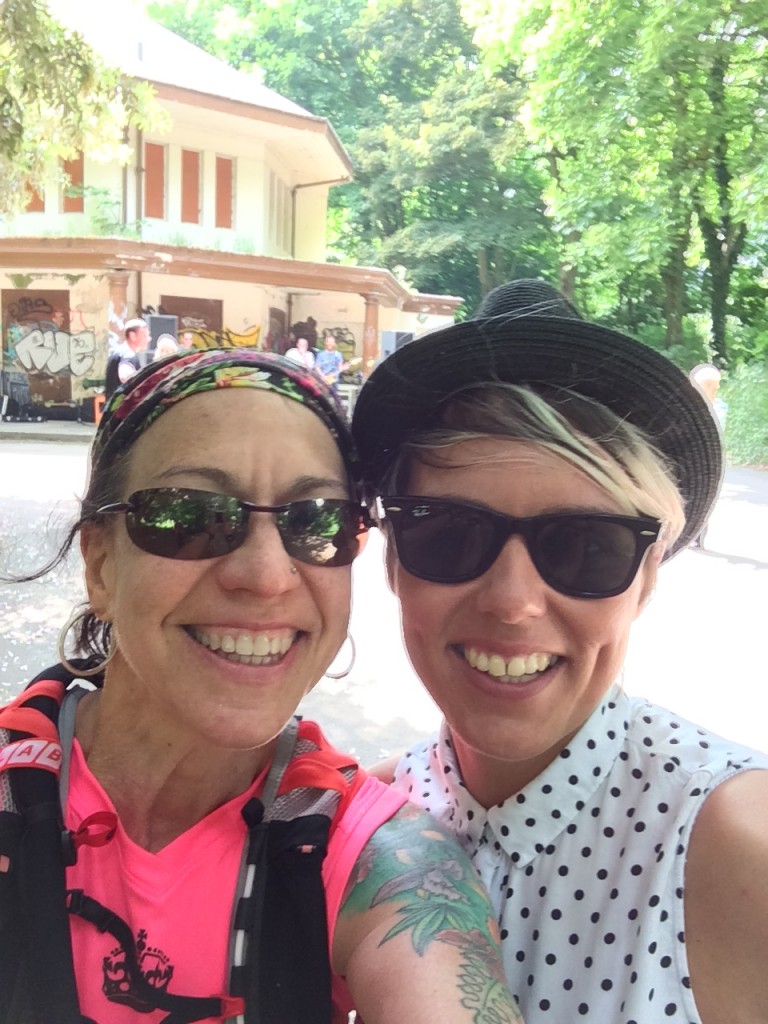 one of the awesome singers along the way

My favorite part, at 29KM was Penny Lane! As we came through we passed the corner and I could hear the music playing. I could feel tears welling up in my eyes. Growing up with the Beatles and running here in liverpool just made it so special. I know it’s uber-cheesy but I just thought about my dad and how the music influenced my life. 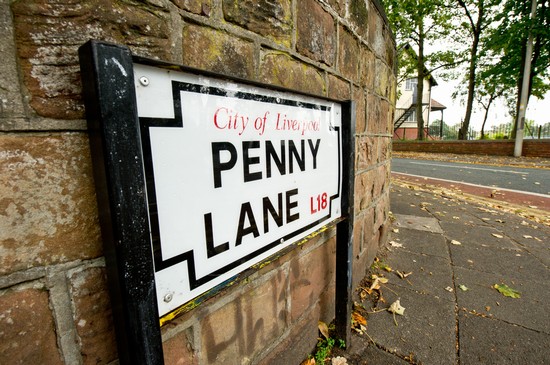 it’s in my ears and in my eyes

Finally the beer and burgers from the weekend were catching up with me and I had to use the loo again. Nobody wants to talk about it yet we all know what a whole bunch of running will do to the belly when it has stuff in there that needs to come out. However, I have to say, the loos and water stops were so well organised! Clean loos and even lots of paper! Anyway, I’ll spare you the details, the tummy just wasn’t feeling it but I was able to solve that problem swiftly.

It was just after mile 22 when we came down a bit of a hill and ended up right smack dab at the river Mersey! What an amazing sight! I mean it really took my breath away! I stopped then and took some photos and admired the view for a moment. I then started running again and saw that quite close behind me was the 4:45 pacer. I picked up my pace enough to have him a bit further behind me. Alas, I just couldn’t continue. I saw George and we verbally High-Fived one another. This was by far the loneliest part of the race. I think if I would do it again, I would bring my headphones just for these moments. 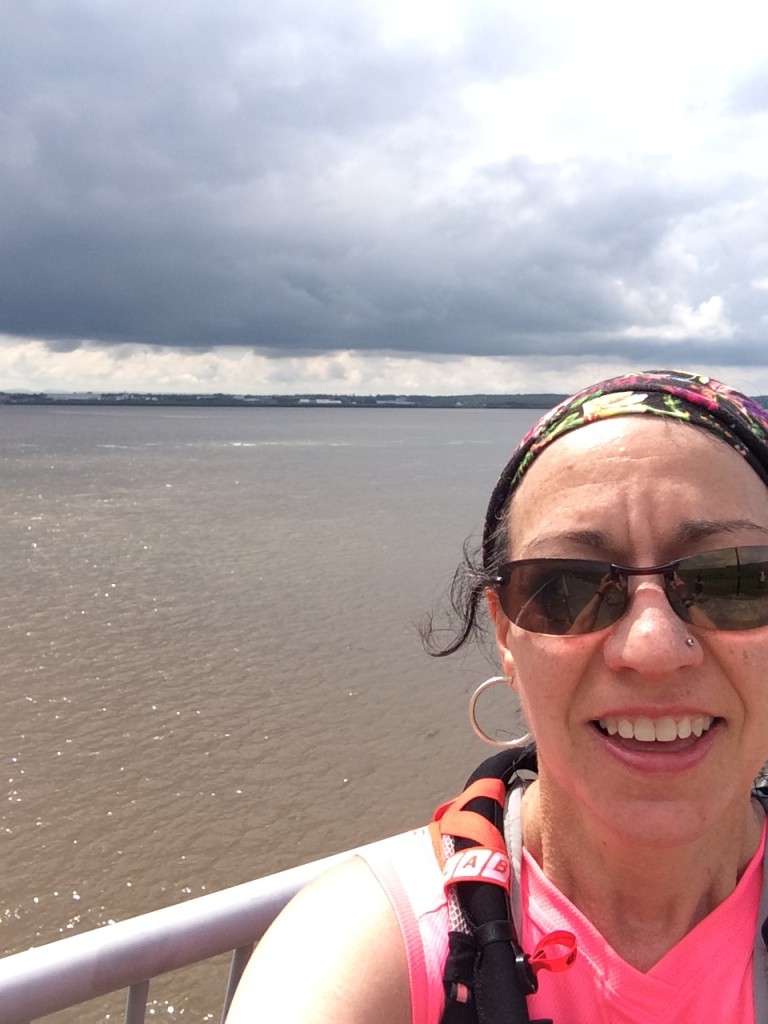 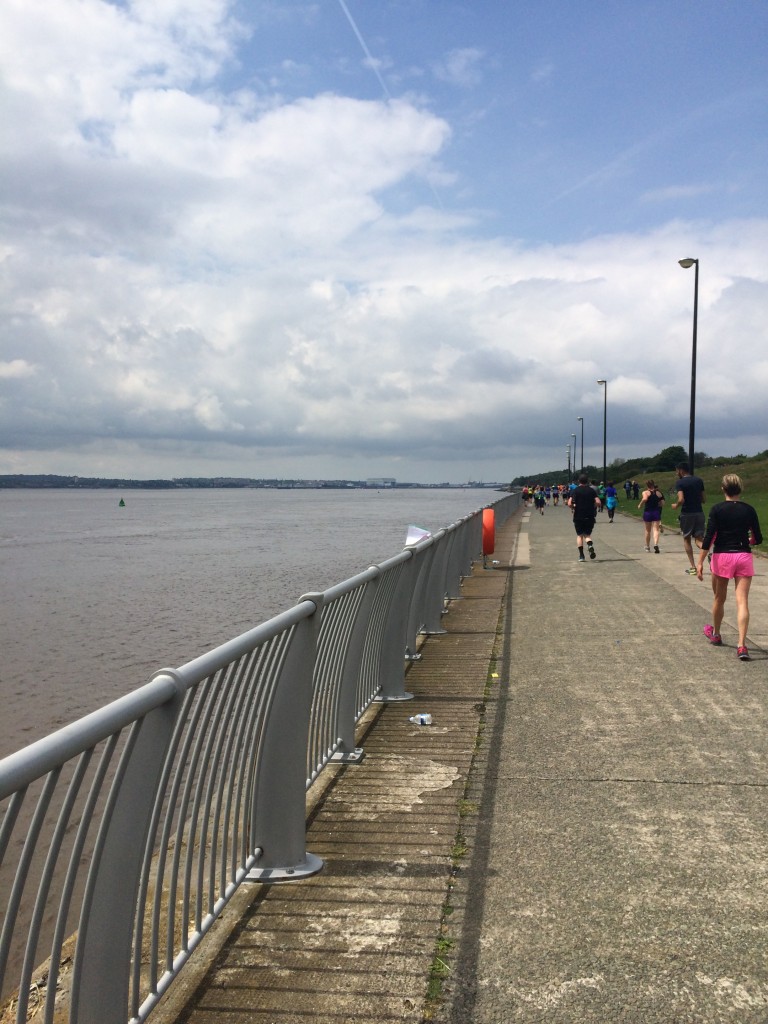 Mile 23 -25 were just killer. FINALLY we came around where I could actually see the docs again and hit mile 26. I was JUST under 5 hours. I cranked it up again and sprinted for the finish! SPRINTED! What a bummer to come in at 5 hours and THREE SECONDS. So much for under 5 hours! I know it’s still a great accomplishment, but I can’t help but be a bit bummed. Why didn’t I sprint sooner? Why did I stop so much? Oh well, the things we learn, eh?

I came through the Echo arena again to collect my medal and once again felt like bursting into tears. It’s so hard to describe the feeling of accomplishment, especially when you still have doubts about your abilities and negative self-talk going on in your head. I was SO happy to be done! And who did I find after collecting my medal? Lesley!! 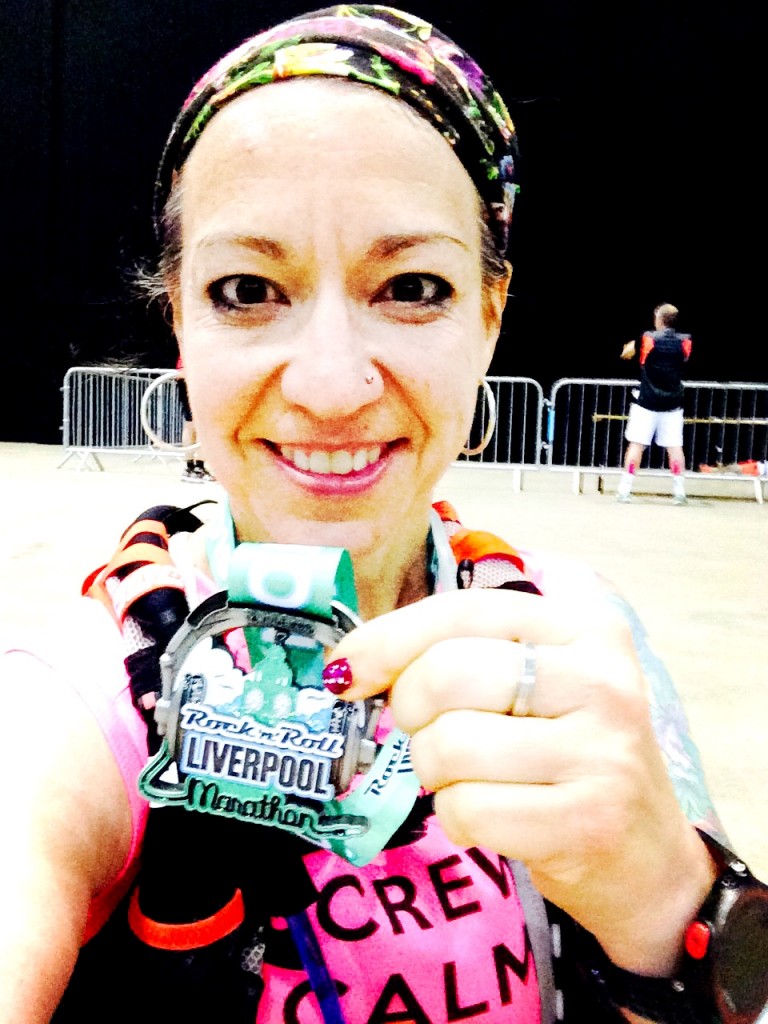 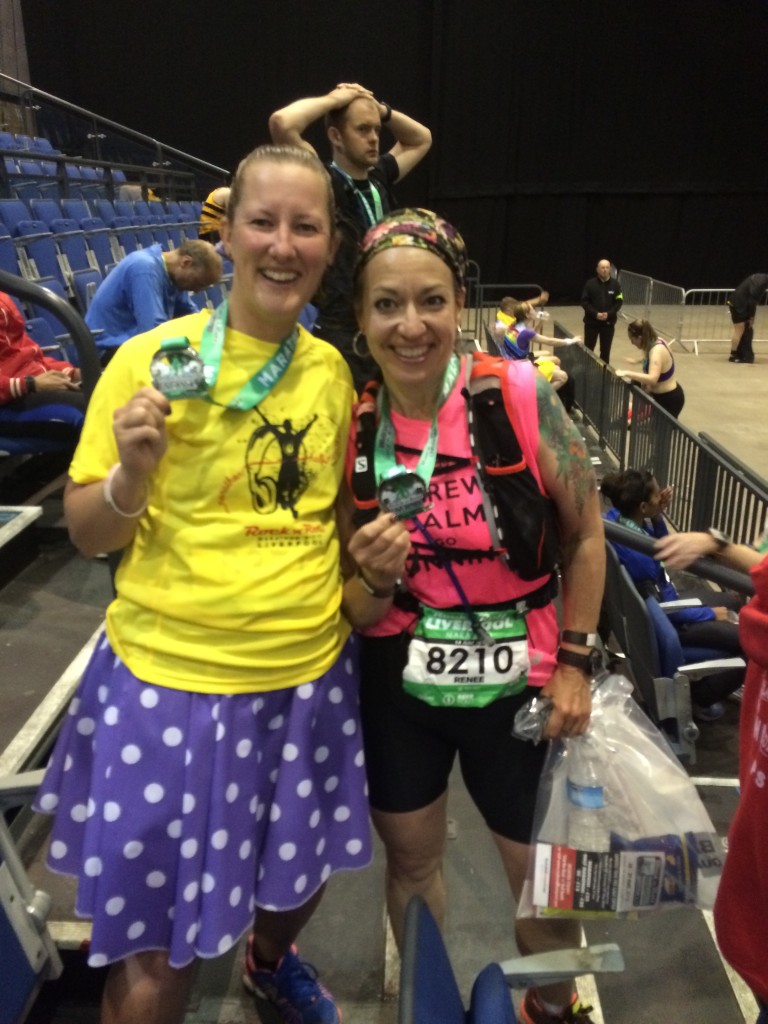 I collected my goodie bag and hobbled UP the arena stairs to go out of the building (who thinks of these things??? we just ran a friggin marathon!) and over to the FREE PINT OF BEER area and to pick up my extra medal for running both races in the weekend. 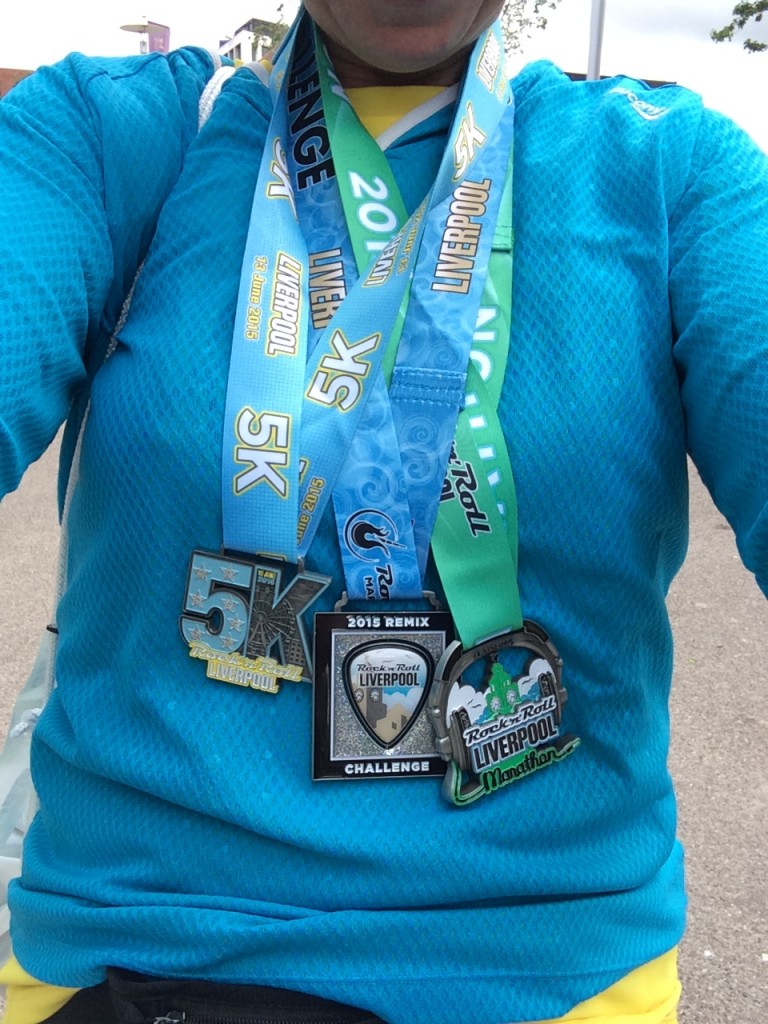 I got up to the VIP area where my man (who ran it in 3:16 even after having an altercation with some bikers and a tumble to the ground, ripping up his hands and leg) was waiting for me. Jessica was there but most everyone had gone. Rob and Adi had to get back to York. Marc and Nicky were off at Revolution celebrating. So, after finally getting off my shoes and socks and switching to compression socks, we made our way over to the Revolution bar with the other RTW’ers! 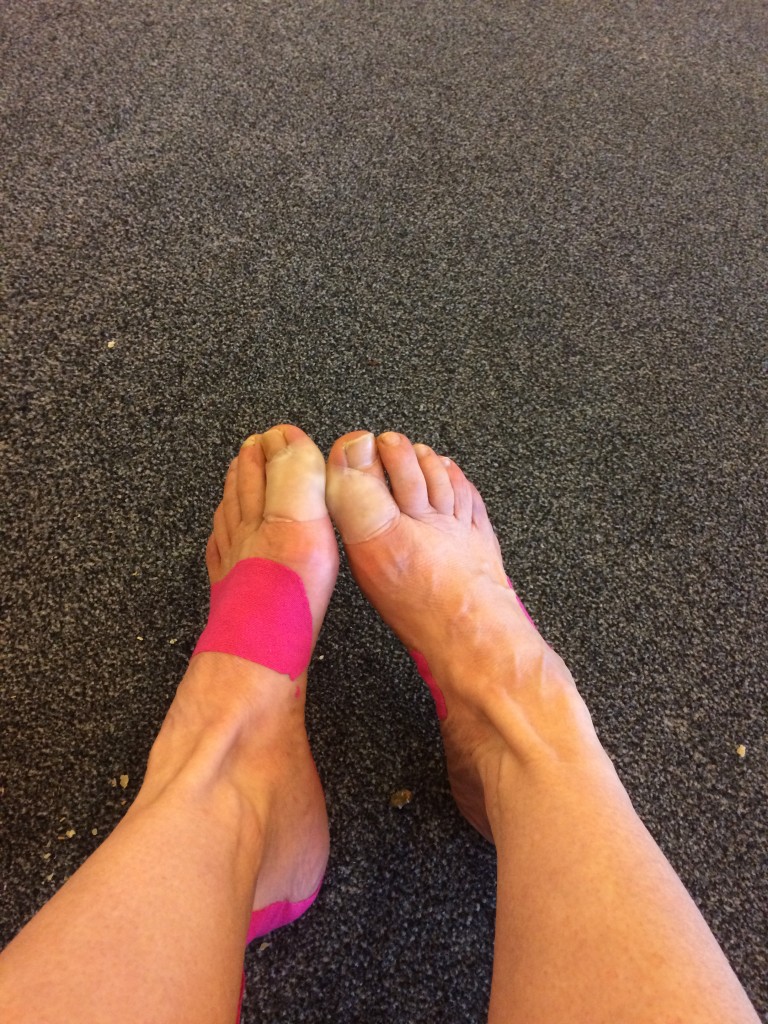 my poor dogs were killing me!

It was an absolutely fabulous time at Revolution with some truly wonderful people – I wish I had photos to share but I may snag a few off Nicky or Karen or Steve or Joni… It was finally time to go hobble to get food or it was going to be a liquid dinner and no after show for us!

I promise Part III won’t take as long as Part I and II! After Party and final thoughts coming up!