This week was a bit different than normal. I took the week off (though normally we have around 3 weeks of summer holiday, we did not plan on going anywhere this year. Good thing too as there were quite some issues and discussions about schedules during “our” 3 weeks holiday with the kids this year) and my main plan was to clean up and clear out a bit at home, exercise and eat right. I managed two of those three and also had a little fun as well.

Tuesday – was supposed to be interval training. It was, sort of! Ron and I needed to take The Boy to work (he’s 15 and he works at a supermarket now) and we decided to do a run in the neighborhood, which just so happens to be pretty much the Montferlandloop (up to 15KM depending on how you run it). It was warm and humid once again, and I figured I would try to do my intervals and throw some extra mileage in to the works since I didn’t do the longrun from week 7. But… Montferland is not a run for the faint of heart. It can be very challenging with the hills. So I had to do 3 times 10 minutes with some rest in between, but it just. wasn’t. happening. However, I still ran 12.5KM. I think my best shot at the 10 minutes was around 8 and the last interval I split 5 min/rest/5min. Anyway. It was most certainly better than nothing. 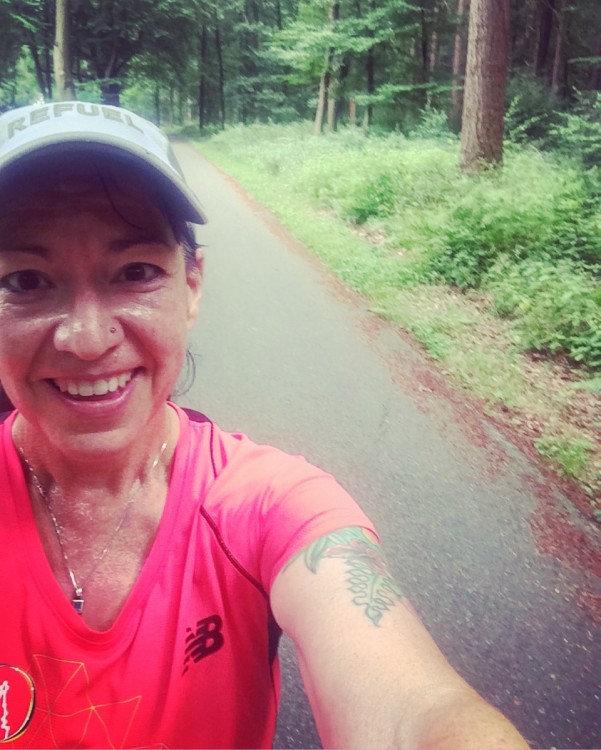 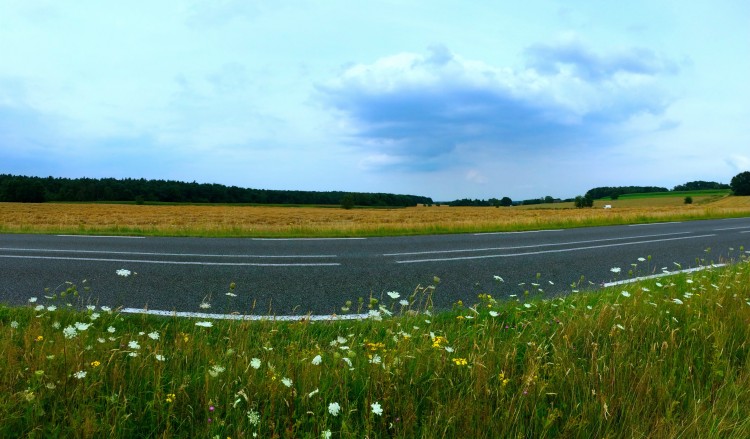 Wednesday – rest day! I meant to go to bootcamp but I stayed home to finish up some clearing out/ cleaning I was doing at home.

Thursday – something fun! On the plan was a recovery run, but because we now have a SocialMile in Delft (“015”) and because I was on vacation, I decided some weeks ago I would go to Delft to run with my crew. My friend Babette organises the runs every Thursday and she phoned me earlier in the week to ask if I wanted to stay over so that we could run together as well on Friday. Did I ever! So I packed for a few scenarios (beach, running, normal clothes) and headed off to Delft with My Trainer Vincent and My Hero Chantor. The run was lovely; beautiful area of the Netherlands and great to end up in the center of town to make our presence known, do some planking and take some fun pictures. Total was 8.5KM. Afterwards we had a drink together and then I bid Vincent and Chantor farewell as they had to go back to Arnhem. 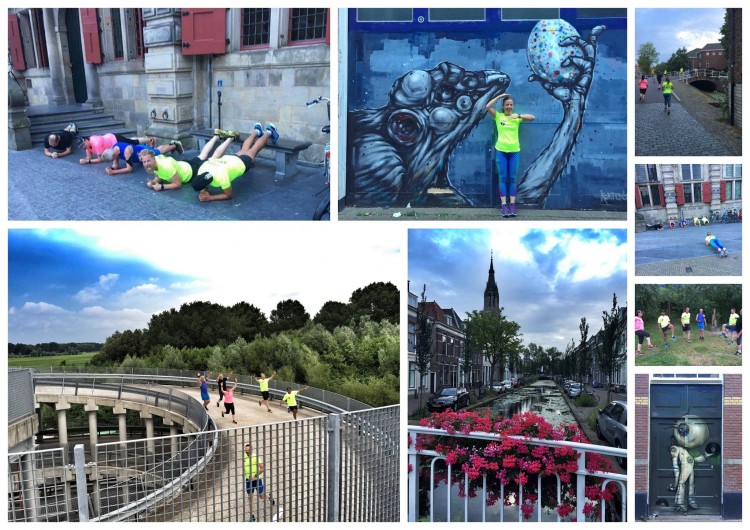 Photo courtesy of SocialMile 015 and Babette.

Friday, intervals (again!). This time I was meant to do 6 x 1KM (1000’s) at around 5:45 – 5:50 min per KM and 90 seconds rest in between. Babetee also luckily had intervals on her schedule (we are actually traveling together to Berlin!), not the same but time and distance worked out to be almost exactly the same. So, we went to the coast!

Ah how I love and miss the sea! We drove over to Kijkduin, which isn’t so far from her place (she lives on the edge of the Hague – where I used to live) and decided to go out into the wind first and then turn around when we were halfway to meet up with each other in the end. Though the wind made it quite challenging for the first 3 KM, the 2nd half of the training I was actually able to hit my target. It helped a LOT to know Babette was there with me. I don’t know why this is; I have done LOADS of training alone and it was fine. I think when I’m mentally not 100% in shape, I really need the support more. 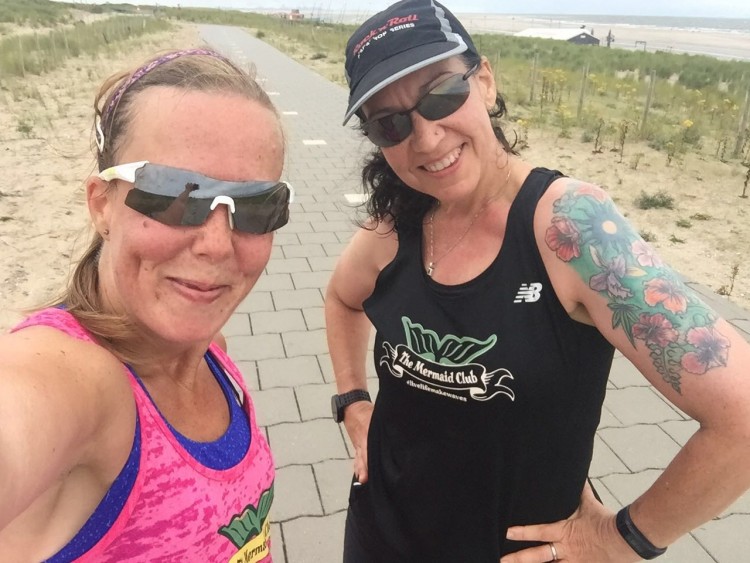 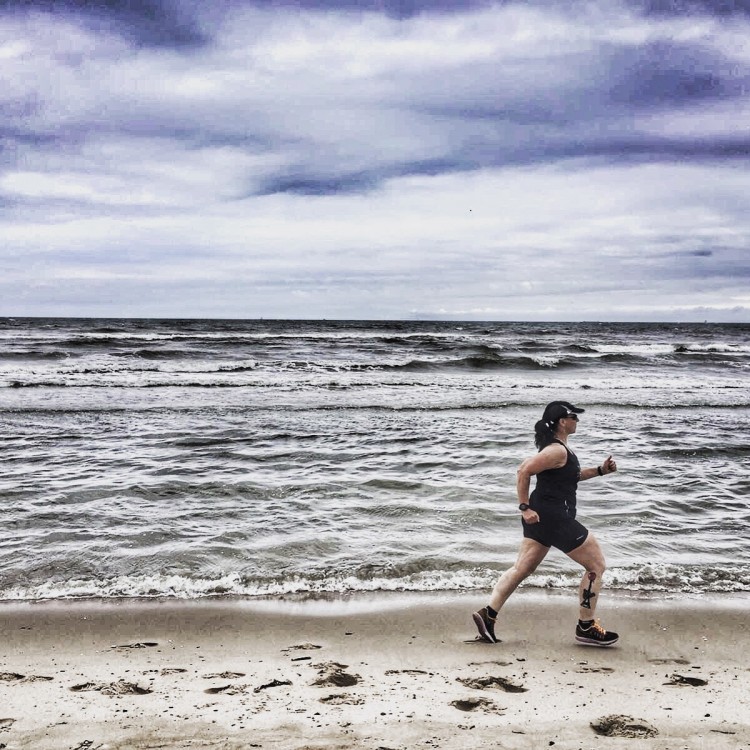 So, successful intervals and afterwards to Scheveningen to the Fat Mermaid (since we were both running as “Mermaids” from the Mermaid Club for drinks and food. GREAT afternoon – such a lovely day together. 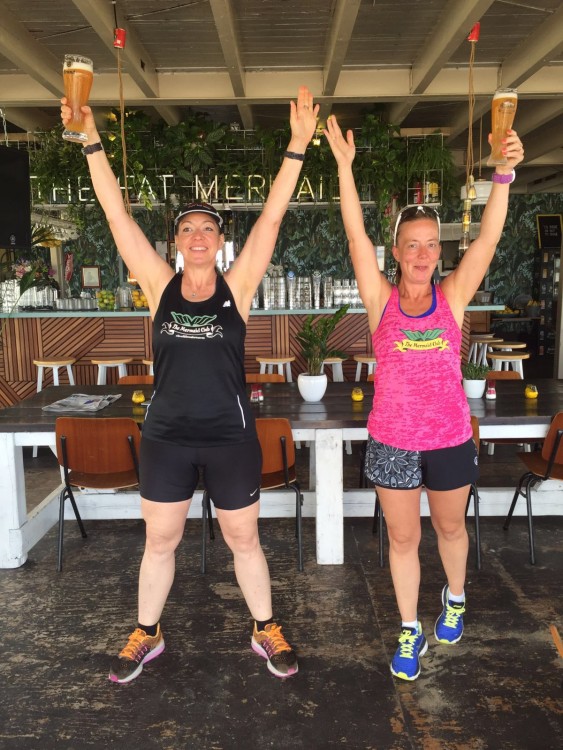 Saturday – rest day! I actually had an appointment in the morning with the trainer from Boot Camp for the “afval” race. As suspected, I lost zero (in fact I gained 300gr) BUT… my waist is 5cm smaller. Too weird. I think it’s a lot. Maybe it’s really true, but it seems like a lot! To be fair we do a LOT of ab work at boot camp and especially with boxing you twist your core quite a bit. So. There’s that. But seriously, I really do want to drop a few kilos. But I also do need to really put the effort into my diet. Being on vacation… even at home… doesn’t help.

Sunday – Long Run! Originally I had it in my head that I was going to have to run alone. I had it already envisioned that I would find a nice route away from home, somewhere I hadn’t been before so that I would stay motivated and interested in my environment (sometimes it’s really hard to be motivated when you run the same damn routes over and over and over and over again). So I started already looking for places to go and planning it out (I do this with the bike route planner online since I can run on the bike paths as well) and figuring out if I could get there by train, etc., when my husband asked me if I would like it if he went with me. Well, DUH!! Of course I would like that!

So ultimately I planned out a route from Zevenaar down to Tolkamer around a lake (Bijland), up to Pannerden and then back to Zevenaar. Since Ron went with me I no longer had to worry about train schedules as we just drove the 12KM to the station and parked the car. With a little luck we were hoping to beat the predicted rain that was headed our way. 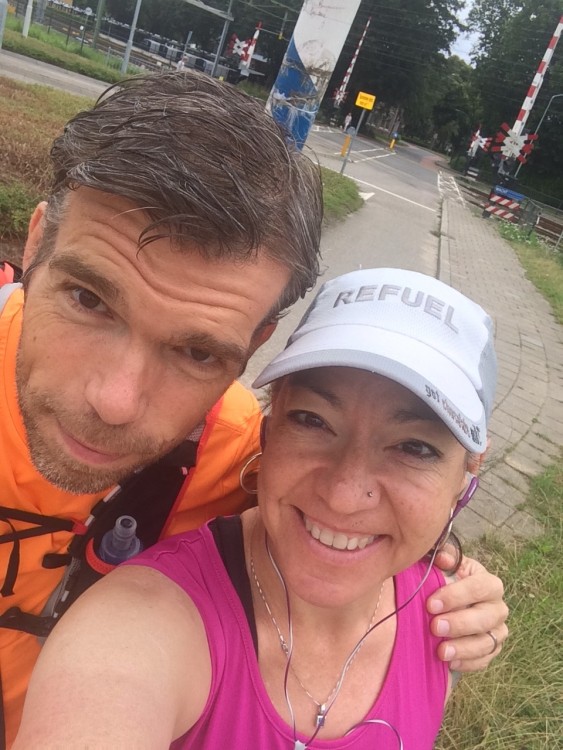 We set out at a nice pace – he ran ahead of me after a couple of kilometers, but looped back occasionally to see if I was OK and if I needed water. I’d say the first 10k actually went quite well; my pace was good and I was feeling fine. 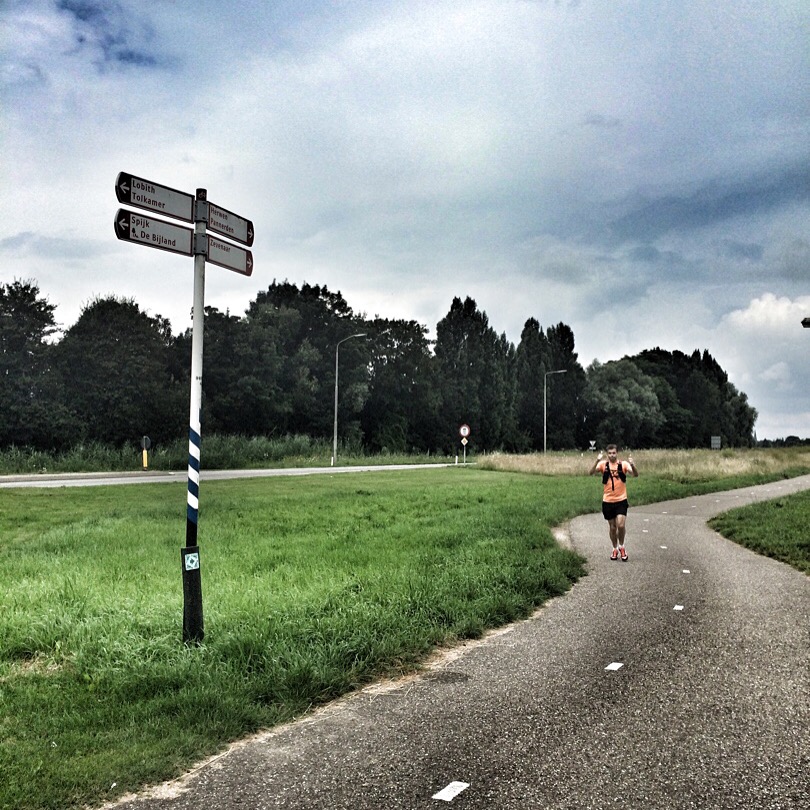 Half Way to Half Way 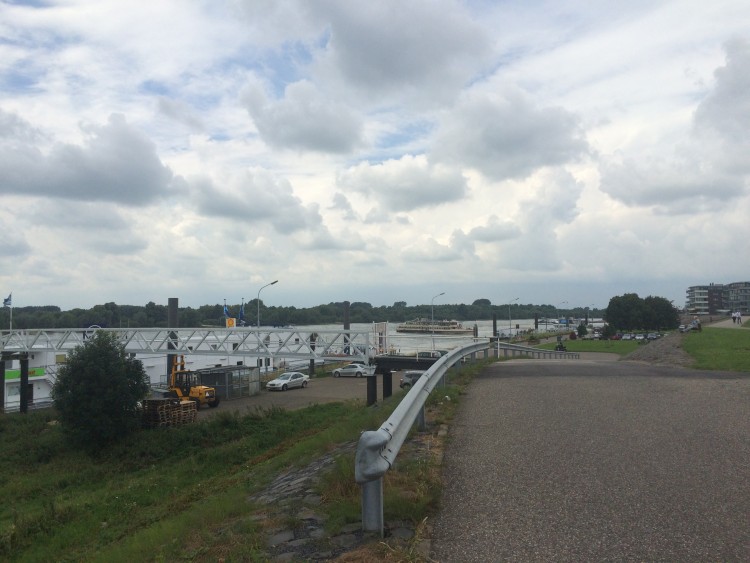 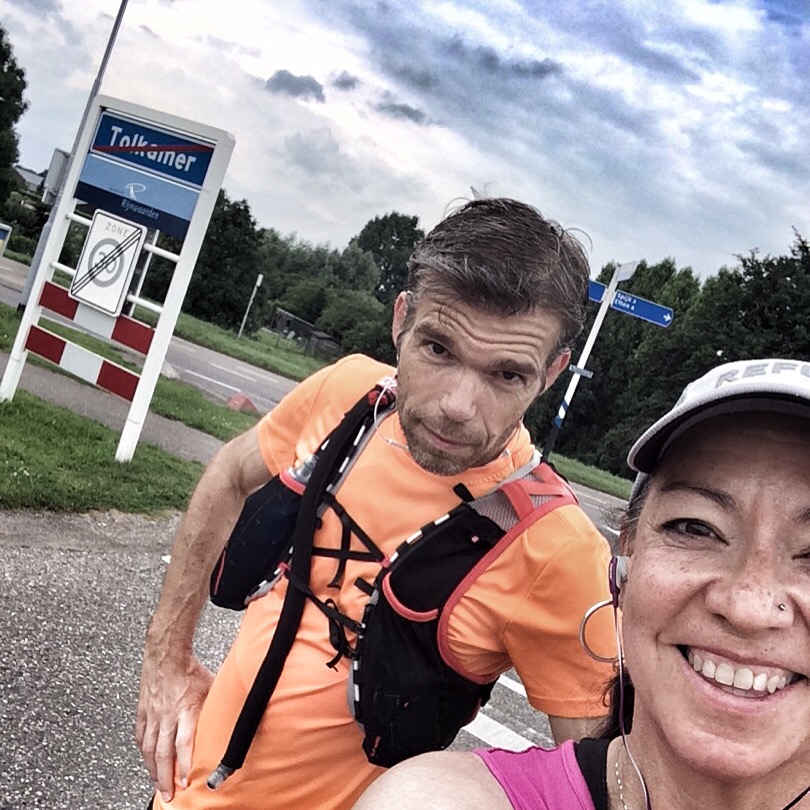 We struggled a bit with the route, went the wrong way a few times so there was some stopping and starting. I was surprised when we reached Tolkamer; I had no idea it was pretty much directly on the Rhine river. Super nice! We then headed off to the lake which we were supposed to run around… but again went the wrong way and followed the dike up and around to Pannerden. Once we reached Pannerden, we were both toast! My pace definitely dropped and I walked a bit. That’s when we knew, with only 5KM to go (we thought – it was actually 6) we just had to suck it up and go. Lots of nice things to see along the way and even barely escaped a thunderstorm that we could see (and hear!) on the other side of the lake (that we were meant to be running around!). 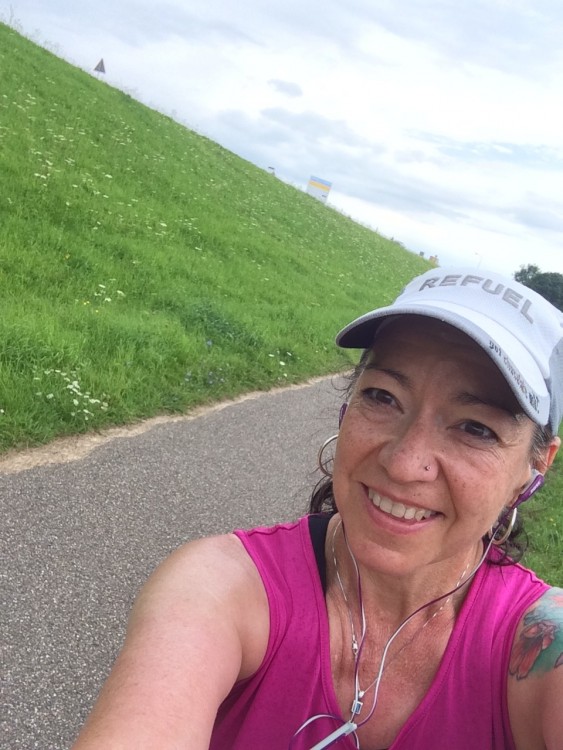 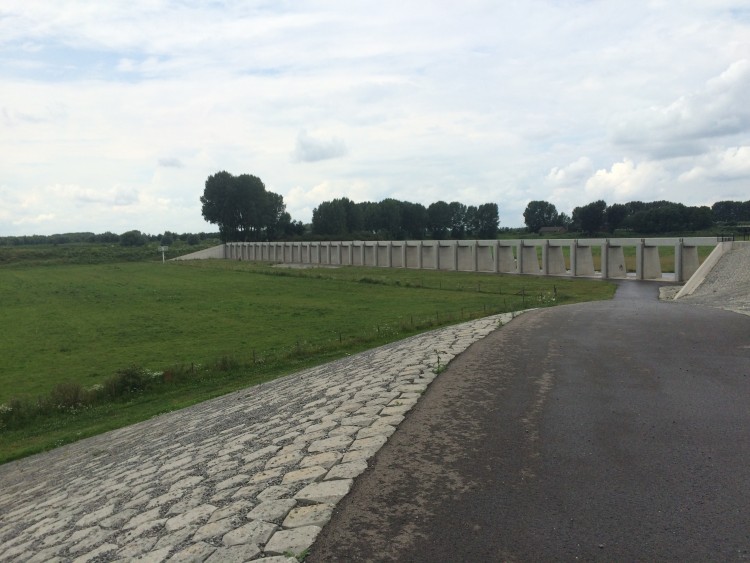 some sort of water control area near Pannerden

At 2KM to go I said to Ron to just run back to the car, I would be there soon anyway, no need to circle back again. And actually it was 3KM since we weren’t quite at the station yet! 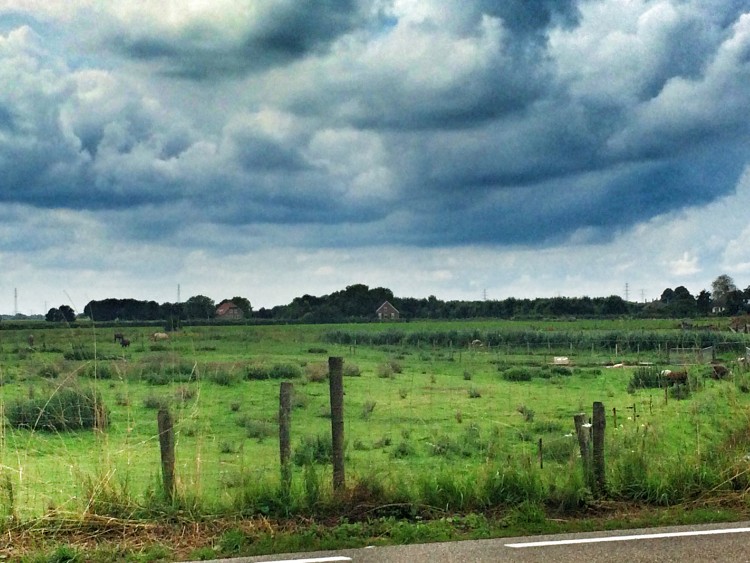 Afterwards we headed over to a cafe to eat all the things, then did some grocery shopping (as it was getting late), then home, food prepped, showered, went out to dinner (more all of the things eating!) and then had a quick drink before heading home.

After all, it was the last day of our vacation as well!

We’re halfway there now – only 8 weeks to go!

Do you ever have a staycation? Do you mix practical with training and fun?