Holy crap you guys. 13 days until the end of the year. I’m ready to see the back end of it.

it’s not like it’s been horrible, but it’s not been great either. I haven’t got much to complain about, but I can’t say I’m excited about how everything has turned out.

Don’t worry. I can find the positives. There are some. I’ll save that for my end of the year post, ok?

In the meantime. Hello DECEMBER. We’ve been waiting for you.

In case you haven’t seen all the blasting posts all over my Facebook page (which is a REAL possibility due to the algorithms of facebook and my sad lack of using 3,682 hashtags in each and every post and my not willing pay for my posts to be “boosted”) This month I have been running every day for Marcothon. What’s Marcothon? Well The challenge – Marcothon, started by a guy called Marco Consani – is pretty simple. Run 3 miles or 25 minutes minimum everyday in December. Including Christmas Day. If you miss a day, you’re out. Its a way of keeping motivation up at the end of the year for people who need a bit of a kick out the door. Its now in its 8th year and thousands of runners across the world are doing it. It’s not for everyone, in fact 25 mins per day is a lot for me especially when I’m used to having rest days, my back and my foot is/was jacked up and I don’t have any “reason” to run these days. (wrong attitude, but I’ll get to that)

However I thought, what the heck. I’ll try it. It makes me feel like there is a goal in sight, a reason to keep going and finally got me shifted in my thinking. I don’t have to have a reason. I could literally run 25 minutes, I could run/walk it, I could go a half hour, 45 min, an hour; it doesn’t matter! I can run when I like and for how long and I can be proud of myself for doing it and pleased with the results. In the beginning it was kind of a struggle. I had some crappy runs. And my back, man it was killing me (since Athens, actually). But there was a turning point, I think, last week. I had one run where my legs were heavy but I think it had something to do with running on the treadmill the day before. I am starting to actually think I may hit my 2016 running goal of 1600 kilometers. If you had asked me in November if I’d make that I’d have laughed you out of my general area. But now… I don’t know… it could happen. It might be tricky but it could happen. 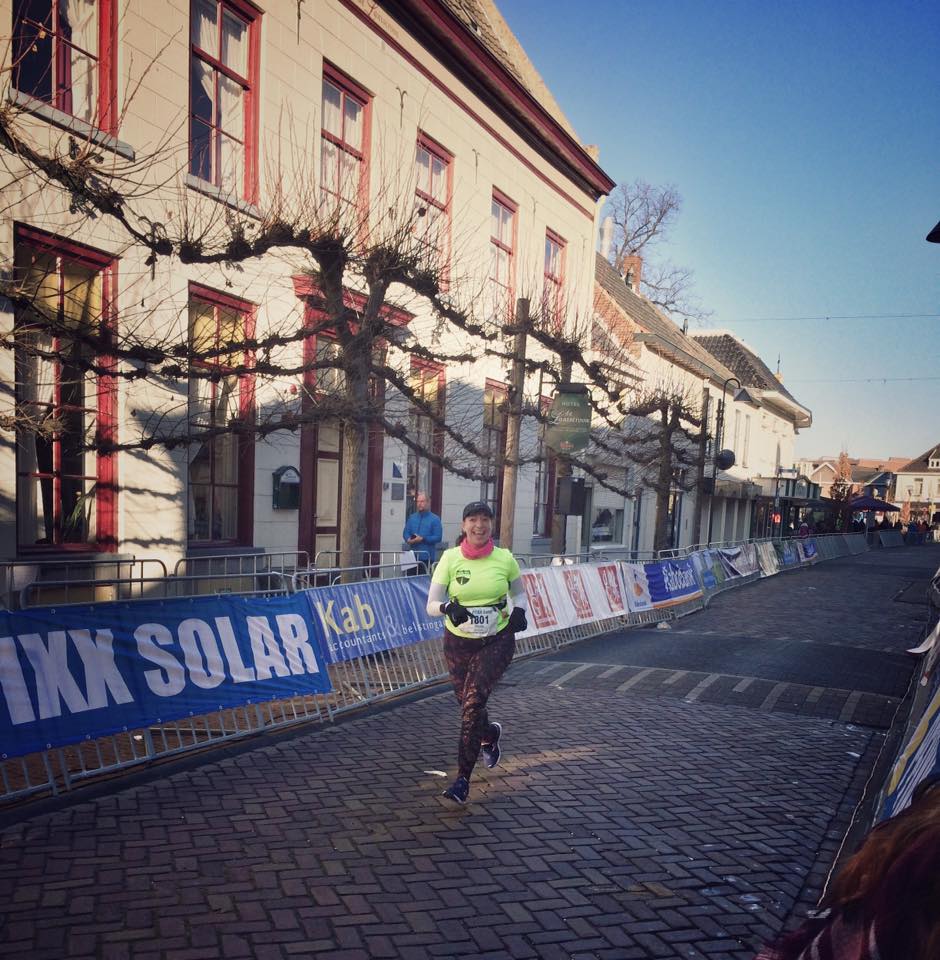 a rare capture of flying feet

On the other hand I feel pretty isolated in my running. I’ve no one to run with because everyone has progressed and gotten down to these amazing racing weights and I’ve gone backwards in tempo and upwards in weight. Not going to lie, I’m envious. I don’t want to go to my running group (which is major because I love them. ALL of them) because I feel like I’m even too slow for the slow group. See how confidence can swing from one end of the pendulum to the other? I miss my running mates but I actually feel embarrassed. It’s nutso. Once again stupid Negative Nancy living in my head rent free for the 100th time in my life. I think what I need to do is just bite the bullet and start going again and kick Nancy to the curb once and for all. I’m starting my new running program on the 30th of December so maybe that will help. Actually I’m certain it will. I don’t need a new year to have hopes for new beginnings, but it kind of makes sense. This year running has been disappointing. I couldn’t train for Paris like I wanted to because of school, then I failed my exam anyway. I finally had my foot operated on but really wasn’t healed before the next round of training. I gained weight (ok, maybe this isn’t a big deal, but when you are CONSTANTLY FIGHTING YOUR WEIGHT it gets really old, I’m just sick of it. Stop eating chocolate you say? Sure I could do that, but chocolate isn’t why I’m overweight), putting me at 8 effing years (9? I’m losing count at this point) fighting the same damn battle. I had the worst physical marathon experience ever (on the positive side I made a good decision to let my body heal). I’m ready for a new start now. I want to see some positive changes and I’m going to work towards those changes. I promise when I recap the year I’ll say only positive stuff, OK? With maybe one or two whiny complaints haha!

Have you every participated in a “every day —– challenge”? I have often tried and never usually get to the end. I intend to make it this time.