I wrote a post earlier this week but have decided to try again in another way, at least giving my impressions for anyone who may be interested to do this in the future.

But I’m going to be honest, it wasn’t the greatest thing that ever happened to me. I didn’t feel “amazing” at the end. I did it, yes, and I’m proud that I did, but I didn’t have an experience that will propel you into signing up immediately after reading this post.

Leading up to the Half, I knew I wasn’t fully prepared; I hadn’t done all of my runs as my training indicated I should do and my head has been playing games with me for weeks now, so mentally I also wasn’t ready. I figured I would just keep going – I’d done 16KM a few times and figured it’s “just 5 more”, surely I could do it if I could do 16? My last 16KM training, which included walking, I did in 1:50, I figured I could do the half in 2:30. I was so wrong.

The weather was against me actually. It had been very hot for at least a week leading up to the event. I had to go out and buy new running clothes because I pretty much only had winter gear, long pants, that sort of thing. I also bought a belt to put my phone and iPod in, and that held two 20oz bottles of water. I should mention I am not a fan of carrying anything on a run and, regardless of function I really hate those water belts in general. I had taken Tara’s advise a while back to carry water with me and it seemed to help with the headaches to keep hydrated (I mention Tara, but actually several people said it was dehydration that was giving me the headaches; Tara showed me a type of bottle she carries and I bought something similar). With the temperatures as they were, I knew I would need to have water with me, hence the belt.

I prepared for the race like I normally do. Lots of water a few days before. Carb-loading. On the morning of the race I had my big bowl of oatmeal and packed a raisin bun with peanut butter and banana for later. I also had a Luna Bar with me (I stocked up on these while I was in the States) and a PowerBar that I’d bought the day before the race when I went to pick up my race packet.

This race was in Utrecht, only 35 minutes by train (as opposed to the races I normally do in the North, more than 1 hour drive/train) but I wanted to be early just to try and relax and get into the spirit. Hubs and my friend Melissa were there with me to support. We actually arrived at around 12:15 but I wasn’t due to start until 2pm. We sat in the “party area” and watched the Marathoners running on the big screen. I drank more water, ate my PowerBar, did some warming up and tried to get my head in a good place. 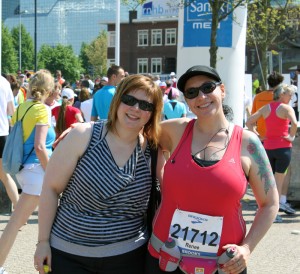 After several trips to the toilet “to be sure”, it was time for me to say so-long to M and Hubs and line up for the race. There were no corrals which kind of confused me. I think I made it towards the start at about 3 minutes past 2 o’clock. And… we were off.

Just after starting I felt so incredibly thirsty. This happened to me at the last race too and I put it down to nerves. I was surprised at how quickly we’d reached 3 kilometers, right before the first bridge we had to cross. I felt really good then, my legs felt great, my head was calm but I was thirsty. I didn’t want to start drinking too soon as I had no idea if there were toilets along the course (turns out there weren’t) and I didn’t want to have to go before I’d reached the half way point.

It was incredibly hot out. I don’t know where the first water station was, but it was a welcome treat to have a drink. At this point we were out of Utrecht and in De Meern (I think) where the locals were out cheering and spraying us down with water hoses. I was so happy to see these people. In fact all along the way people were supporting us to keep us cool.

I must have been around the 8KM mark when I walked a minute or two. Here’s where I took a drink of my own bottled water (which was enhanced with some powder that replenished electrolytes). I picked it up again and about 1KM later is where I saw the first casualty – a guy laying on the ground surrounded by First Responders.

Just over halfway I walked again a few minutes. My feet were hurting, my whole body was overheating, I had to just cool down a bit. I sent a message to M and Hubs that I made it more than half but they were actually tracking me on Endomondo so they already knew. We were about to approach another bridge, I walked up that and started running again going downhill. Around the 16 mark I was starting to feel very lightheaded. I think I had basically used every ounce of fuel I had in my body at that point and was completely empty. From 16 to the end it was a series of walking and running. At one point around 19 a group of maybe 10 people saw me and started cheering for me (I was walking then) “Come on Renée! You can do it! It’s not far now! Pick it up!” I found this very motivating and gave me the boost I needed so I started running again and they all cheered! Was a very nice feeling!

Sadly I could not carry on running the last 2 kilometers. I just continued to walk/run. Around 150m from the finish I decided I had to run across the line and not walk. So I put everything I had back into my legs and went for it. At 50m I saw my husband and M and somehow had the strength to smile and wave.

Crossing the line was actually the weirdest moment of the race. The woman ahead of me decided to run over the line with her very small child and they were taking up a huge amount of space that I couldn’t seem to get through. I had to actually slow down to cross the line! Plus my “finish” photo is basically her and her kid and my trying to get around them. This really pissed me off to be honest. 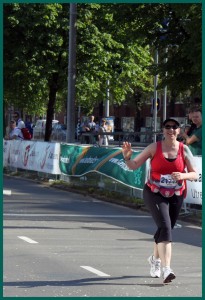 So. That’s it. I did it. I crossed the line. I got my medal and I felt like complete and utter shit. I found Hubs and M, I got a beer, dug around for my sandwich, but it was too late. I was so empty and feeling so bad that I threw up all that stuff anyway on the train ride home. I honestly don’t feel great about it. I don’t know that I’ll do it again.

Things I learned:
1) You have to train. Don’t be stupid and not train. If you don’t have time to train then don’t do a half-marathon
2) You have to eat more. You need to eat enough fuel that will keep you going throughout the race. And, if you want to do gels and stuff during the race, test them out before a race so you are sure you won’t get sick (I wanted to try some gels but ended up not and was advised NOT to do this during a race. Not everyone reacts to gels well)
3) Look up the course beforehand. No toilets along the way is kind of unacceptable.
4) “Just 5 more Kilometers” is bullshit. It was like trying to cross the frickin Sahara. You can play tricks with your mind and try to motivate yourself into something but be realistic.

I wanted to finish at 2:30. I finished at 2:41. I know that I finished and that’s great, but I’m kind of embarrassed about the time. If I do another Half (ever) it’s not going to be in spring or summer. I would much rather run in cooler temperatures.

I didn’t want to make a negative post about it, this is just my honest feeling about the whole thing. Acceptance is also about admitting things maybe aren’t the best for you – I think my weight holds me back too. For now I will probably stick to 10 – 16KM races. I know I can do these, I feel good at the end, accomplished, proud. I felt nothing like that at the end of this race, just sick, disappointed and like I wanted to keel over.