Seven Hills and that Pesky Little Problem I have

I desperately wanted to do it the next year but I had that little knee problem and was out of commission for this event in 2011.

So as soon as I could run again (when was that, back in November or December last year?) I knew that the Zevenheuvelenloop would be done in 2012! Oh yes!!

I mentioned a few times this summer that I was training more hilly terrain and to be honest, I’m really glad I did. That, in combination with the stuff I did with the physio and then later at the gym (and at home) really helped me this time around in Nijmegen.

Unfortunately hubs’ was not able to run with me. Though he has tried, he just has too many problems with his hips. We are really not sure what to do – we thought maybe new and proper fitting shoes would help, and it did a little but not enough. We also discovered that he absolutely has to run his own pace to run a minimum of 5KM without pain. Running with me (ie slower) makes the pain come faster. So we knew at some point that a 15KM was definitely not in the cards for him.

I asked my running hero, Marcellus, if he wanted to take hubs’ place and he accepted :) This is a fairly big deal because while I don’t mind going all over the country to do races, most people I know stick to their own area. He’s Dutch, and pretty much lived here his whole life (except for one year in the US) and had never been to Nijmegen! (though this is typical; I, as a foreigner, have been to more places than most Dutch people have been in their own country). Marcellus is the one who encouraged me to keep going through my C25K program and convinced me to skip right over a 5K (and a 10K) for my first race to join the company running team to participate in a 12K. So, yeah, I was pretty excited to have him at least start with me at this race. 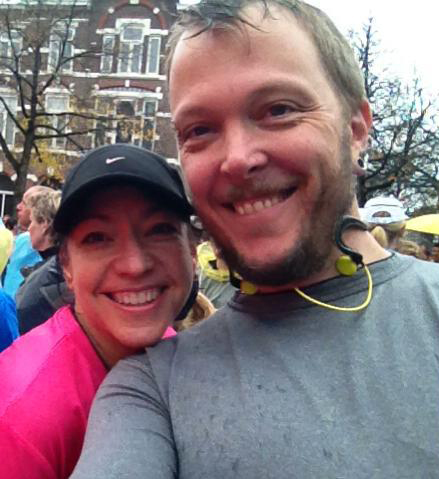 Unfortunately it had been raining all morning the day of the race, though this is not something we are not used to, and to be honest I always seem to have my best times when it’s raining so off we went from Arnhem to Nijmegen (a 20 minute train ride). We met M and another colleague at Starbucks before we headed off to our starting corral. It was cold and we weren’t due to start out until about 13:45 (we were in the last corral) but that time came and went with no sign of starting any time soon. Since we arrived around 13:00 I already questioned myself if I should try to use the loo again (I’d been about a 1000 times already) but I thought no, I’ll be fine, we are going to start soon anyway.

I think it must have been about 14:30, somehow the rain stopped and clouds parted and suddenly the sun was shining! It was glorious! And finally… we were off! But now… I really had to use the loo… 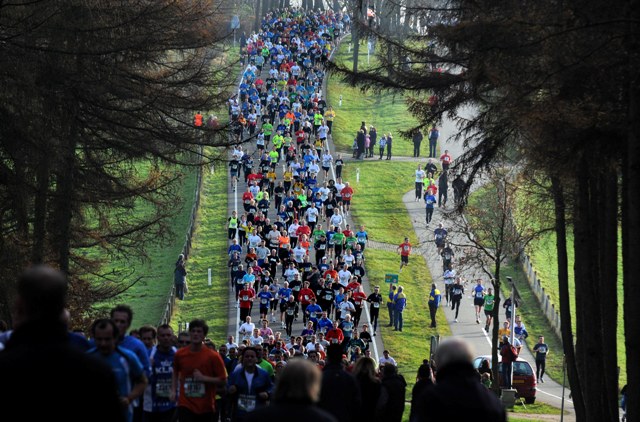 What I really wanted to accomplish was just beating my original time in 2010 of 1:39:26 and to be honest it was looking pretty good, BUT…

I really needed the loo.

And every time it seemed like I could go, the loos were locked up.

Finally around 9.5KM there was a portapotty that was open. Finally some relief!!

The bad news? I lost about 3 minutes in that damn thing! I did my best to make up some time and had a good couple of KM’s, but it wasn’t going to be my day to break any records. Oh, wait, but I did. My time? 1:39:20. Six seconds faster! Ha!

I seriously need to do something about my bladder!!