Recap: 7HL Run To the Hills. All Seven of them.

On Sunday, the 21st of November I participated in the Zevenheuvelenloop or Seven Hills Run in Nijmegen. Where, you ask? Nijmegen. I know, most of you have probably never even heard of it, but this run is a major event – approximately 25,000 participants including world class/ world record holders and breakers. And they don’t call it the Seven Hills for nothing, that’s for sure.
.

Usually when people think about the Netherlands (if they know where it is in the first place), they think of flat landscape, dykes, windmills, the sea, tulips, cheese and let’s not forget, dope. But dope has nothing to do with anything here folks. Most of the Netherlands is at sea-level and the Dutch are so innovative that they built some serious dykes and dams to protect the land, people and animals from flooding – so much so that other countries consult the Dutch often when it comes to this kind of thing.
.

In the west, it is flat. Flat as a pancake. Flat as a board. No real elevation to speak of. In fact, some areas are even BELOW sea level. Makes things like cycling really ideal. That’s why people cycle everywhere. Young and old. It’s so easy to get around here. In fact I prefer my bicycle to the car. Because in this tiny country, with 17 million people you can imagine what traffic gets like – major traffic jams. Why take the car when you can take a bicycle? It’s faster and you even have your own paths and traffic lights. Awesome.
.

The flatness also is great for running outdoors. I mean you can just head out and go from your front steps practically. No wonder it feels so easy (and sometimes boring and unmotivating, to be honest) to just go and run for 30 – 60 minutes. It’s not really hard work. At least not right in my neighbourhood. There’s one spot with a little bit of elevation but I’m used to it so I know how to run it. I didn’t really train for the Seven Hills. I thought, hmmm, how bad can it be?
.

Then I watched a few videos and checked out some photos. What did I get myself into?
.

Where I live we have hills. In Nijmegen we have some serious hills. Well, what could I do? I was just going to go for it.
.

I did what I’ve been doing the last few races – loading up on carbs the day before and not eating many vegetables and fruit (because let’s face it – who wants to suddenly feel the urge to go to the bathroom mid run???). Turns out I had to do this anyway since I was not really at home Saturday and I had no food with me (I was stuck in Den Haag due to issues with the trains), so I relied on getting sandwiches whilst underway. Hubs made our favourite spaghetti alla norma (so a few veggies), and we hit the sack around 11pm to be sure we were well-rested for the race.
.

I woke up on Sunday morning around 8.30 and even had a shower (even though I knew I would get sweaty and stinky; I just wanted to be fresh) and made a big, yummy bowl of oatmeal with pumpkin, banana and flax seeds to be sure I was properly fueled. Hubs also made some peanut butter sandwiches to take with us and we packed a bag with our race packets, water and a change of clothes. After searching high and low for safety pins (the last time we participated in a race I had to do this as well and then I put them somewhere and said to hubs “Don’t forget – this is where the pins are now.” Of course- we forgot) and finding them finally twenty minutes later, we found out way to the bus stop to get to the train station. Whilst in the bus I started feeling that familiar monthly “tingle” in my belly. Oh, no, this can’t be the day I’m going to get my period, is it???
.

We arrived at the train station and I decided to go to the drug store to buy some emergency materials, just in case. We jumped on a train a few minutes after that and arrived in Nijmegen twenty minutes later.
.

We had arranged to be able to use the facilities at our local running store Run2Day (our store is in Arnhem of course, but our customer card is valid at all Run2Day stores) to not only drop our bags off, but to have a cup of coffee and some typical Dutch treats beforehand (gevuldekoek), plus we were able to use the toilet facilities and just hang out and relax before we had to go to our starting places. Hubs and I were in the last corral, purely based on the fact that when I registered both of us, I put that our expected finish time would be two hours (I had no idea to be honest, so I just put down two hours) so we were definitely put in with the slow runners (which is fine, I’m not fast and am not bothered in my placement). This meant that our actual starting time was nearly one hour after the official start. So we hung out for quite a long time in the shop before going out. And good thing, because I did indeed get a visit from my Aunt Flo wearing her Big Red Hat (and took some ibuprofen because the cramps hit me already when we arrived at the shop).
. 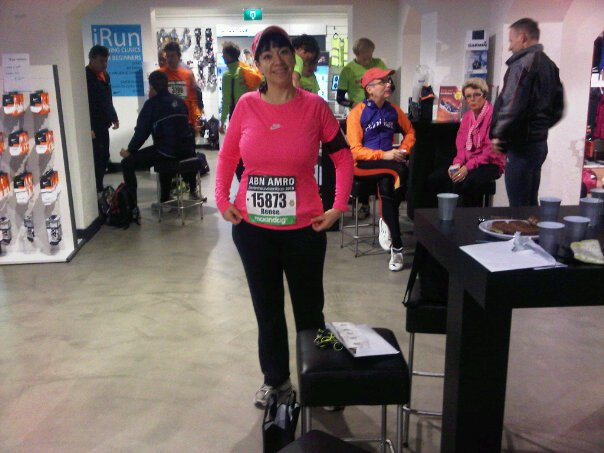 We couldn’t have asked for better weather really. Well, maybe it could have been a wee bit warmer but the sun was shining and it was dry and in November in the Netherlands that’s pretty darned good weather. I have to say I was nervous but really excited and pleased to be running on such a gorgeous day. I had no idea what was ahead of me.
.

I loved the first 2 kilometers, since these were purely through town and there were loads of people on the road cheering, playing music, holding signs up for their family and friends, and then came the first hill… I thought “OK, if this is what the hills are like I can handle this.” My legs felt great, my hips, and the ibuprofen was working – everything was going really well. We approached hill number two, more difficult than the first but still fine. People were already starting to walk, which I was kind of surprised about. There were at least two more hills before the first water station and I decided to take an energy drink (they only give out probably about 3 sips to a cup), which I did slow down and walk to drink it so I didn’t accidentally choke on it. A couple more hills and we were at kilometer nine when we made a pretty big drop in elevation – I thought OK maybe the worst is over… but no, ahead of me, I saw the hundreds of runners ahead of me climbing a giant hill and I my brain said to me “You have GOT to be kidding me!” I honestly thought I was going to cry. And these wouldn’t tears of fear or sadness, but more amazement. Could I do it?
.

I hit the hill and my pace slowed. I think I pretty much waddled up than hill more than anything. It wasn’t running, it wasn’t walking, it was the most I could do, was waddle like a duck to get myself up and over. Finally when we started to go down again I actually ran like hell to catch up my pace a bit. Though I know running downhill is hard on your joints, I just kept a good focus on how I was hitting the ground and how my knees felt and had no issues. At kilometer ten was another drink post and at 11 and 12 were the last hills. Finally at 13 we were on the stretch back into the centre of town. I picked up my pace yet again. I noticed at kilometer ten I was coming in around 1:06 – which was a really good sign; I can usually do nine kilometers in one hour, so I was a bit ahead of myself. I kept going and I finally passed a few ladies that had been just ahead of me the whole way. The last kilometer was really hard to keep going at a faster pace but I pushed it and crossed the line. Hubs was there yelling for me which helped get me over the finish. When he greeted me on the other side I had to grab hold of him; I felt a bit nauseous and thought I was going to pass out. I couldn’t believe it. I looked at my iPod and it said I made it in 1:41, while I was going for around 1:45 – 1:50. I couldn’t wait to find out my real official time.
. 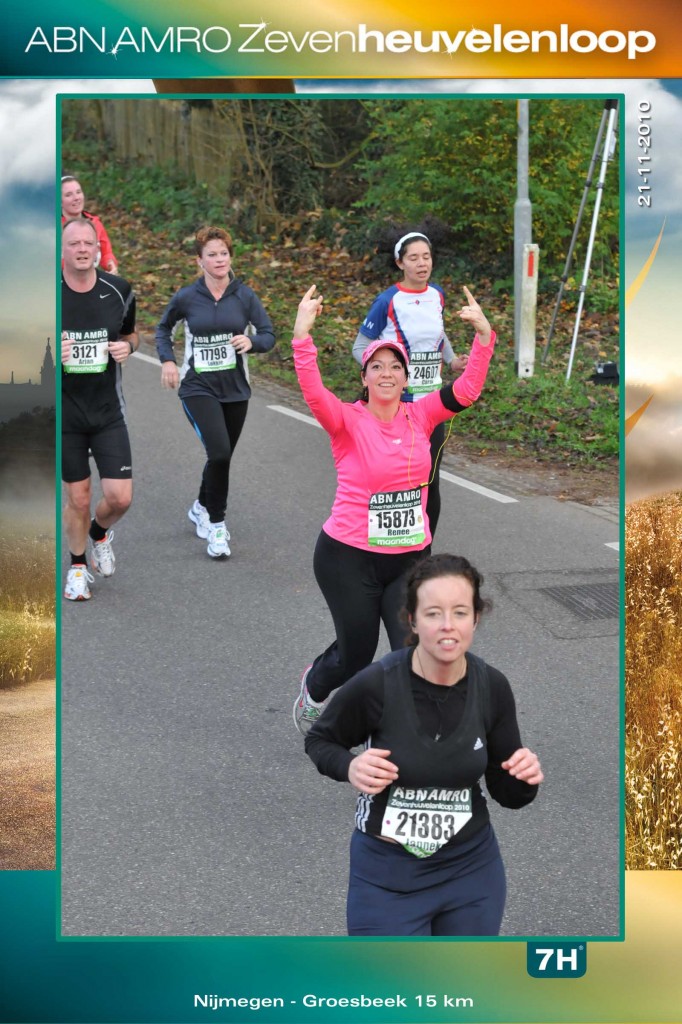 We got through the crowd and picked up our medals and made the walk back to Run2Day. We were drenched in sweat and now really cold and all we could think of was getting into a warm bar and having a COLD BEER! After picking up our stuff we left and dropped into the nearest bar and relaxed for a bit, and eventually changed clothes and headed back to the train station.
.

We did a quick on our last race results at the Dam tot Damloop in Amsterdam; I remembered they had taken our official time also at the 15KM mark – I was at 1:45 that day. So that means I was an entire 6 minutes faster this time!
.

I will most definitely be doing this race again. Now that I know what to expect I will also be training a bit more for hills. What an amazing race!
. 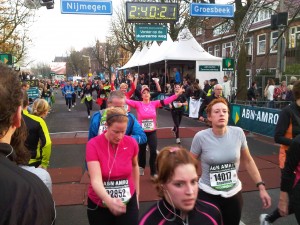