A-MAY-zing May (see what I did there?)

Yeah, Yeah I KNOW it’s the middle of June now.

So let me tell you a little something about when you suddenly have a lot of time. Actually, you don’t quite know what to do with yourself! Hence the silence. Sure I would have been able to blog more because I’ve so much free time on my hands but to be perfectly honest, it’s kind of hard to get a new rhythm when you are so used to the old.

The job is going well. I don’t hate it, but I don’t love it yet either. At this moment i’m neutral and hopeful :) It’s not terrible, the people are very nice and let’s face it, not having to get up at the buttcrack of dawn is a total bonus. I don’t have to be at work until 9am but I could start at 7 if I want, and many people do just that. So it’s kind of weird to hear people saying “Have a good evening!” at 3:30pm but that’s how it goes. I’ve cycled to work just about every day, though I think two days I walked. I know the positives, there are no real negatives, I just really miss my friends and I miss knowing what I am doing. It will be better soon, I’m sure.

My back, acupuncture, manual and physiotherapy

At the beginning of May I was still in quite a state with my back and my SI joint. I went actually 3 times to manual therapy and once to physio and am still seeing my acupuncturist regularly. Manual therapy HURTS like a you-know-what!! WOW. However, I do think it helped quite a bit. My physiotherapist gave me some core work exercises to do and I now have a stability ball at home. Though, to be honest, I’m pretty bad about doing my exercises at home… I just need to do them, I know and it will benefit me, I know… but…

Incredibly enough, during a month where I had tons of pain and not a lot of energy, I ran more than 100 KM’s in May. I haven’t done that since January, but it had a lot to do with our run in Millau.

Millau was AMAZING. Like seriously. It was beautiful weather most of the time and the bridge was just breathtaking. I could not get enough of the bridge! I was pretty worried about the run, since my back was totally jacked up but decided I was just going to do what I could do and hope to make it within the time limits! Plan was to move as much as possible before the race to acclimate and I was armed with my foam roller and not afraid to use it! We stayed in a little apartment about 20 kilometres from Millau itself (and we drove down there so it was easy to get around) and on the Saturday we drove in to get our race packs and got familiar with where to park, etc. It’s awesome staying in an apartment because you can make sure you have all of your food items you need, especially on race day! 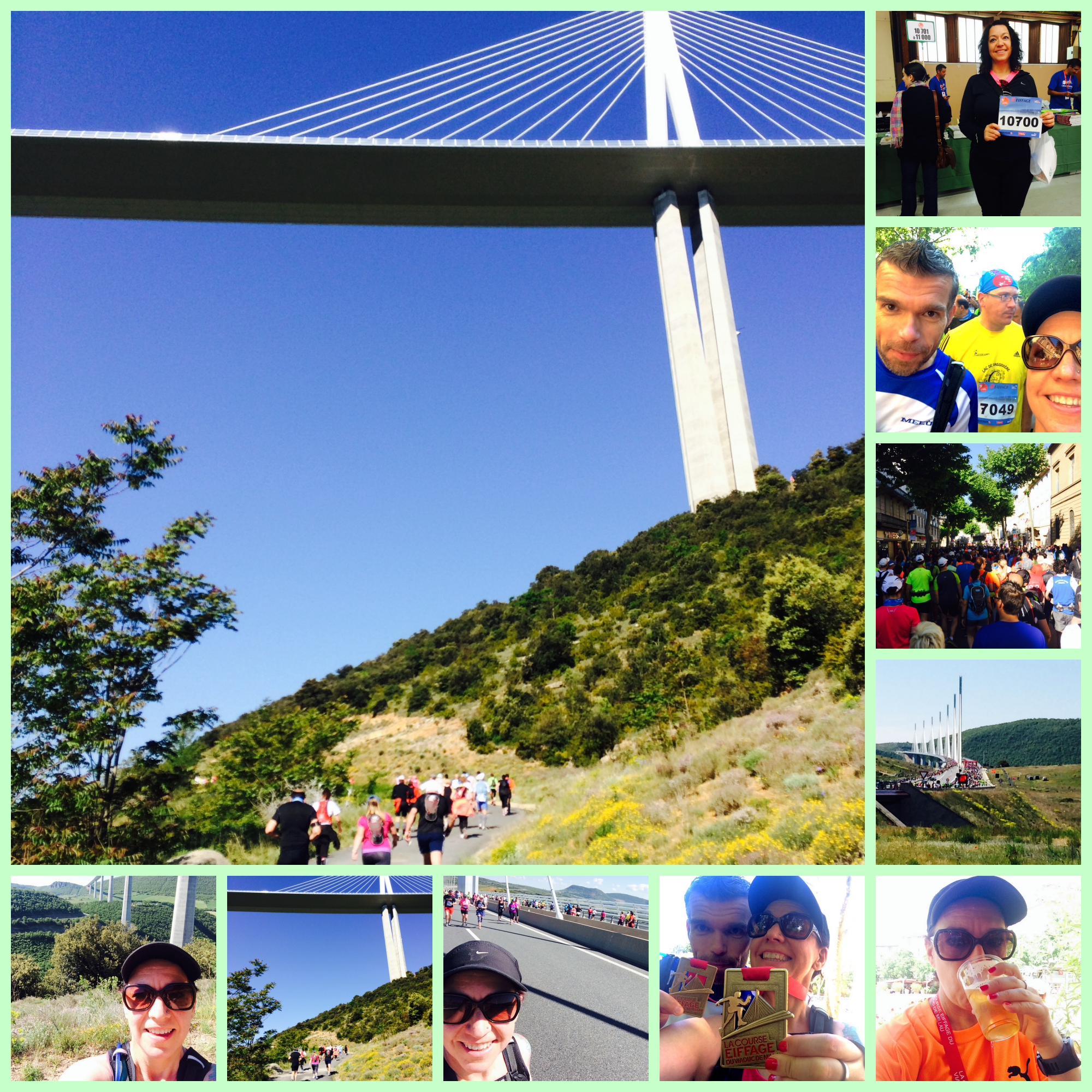 Highlights. and I mean HIGH.

Race morning started EARLY, we wanted to be in Millau by 7:30am as the race officially started at 9am. I could tell it was going to be a GLORIOUS day and we were prepared for temps to reach around 25 degrees (C). It was super busy at the corrals and the lines for the loos were incredibly long, but hey, that’s just something you have to go through if you don’t want to pee your pants along the way! We started right on time and already in the beginning I thought, “hey, this is not so bad!” but pretty much right at the 5KM mark we started to to up. And I mean UP. 3KM up a winding mountain road. Craziness. I had to walk it but I was NOT alone (of course my husband, Speedy Gonzales, ran all the way up). Finally I reached the drink post, ran through that and came up to the bridge – Stunning! The luckiest bit of the race was right when I started actually running the Bridge, I saw the Hubs on the other side! He was waving and calling my name! That gave me so much energy, I LOVED seeing him.

Crossing the bridge was tough because it was still going up! Only at the end when we turned to run the other side did it finally go down. I finally could run steadily again, all the way down to to the drink post again. I thought at that point the worst was over, but NO! from about 17KM – 20KM we were going up and down again! Once we hit 20KM we reached the outskirts of the town and it was downhill, 3 more kilometres! I not only made the time limits, I was WELL within the time, but it was the longest I’d ever run, 3 hours and 13 minutes. Incredible. I would totally do it again.

The most incredible part of it all – after 3+ hours of unsteady paths and going up and down hills… my back stopped hurting. It was almost becoming debilitating and now, nothing. WHAT A RELIEF.

The weekend after I met up with my old colleagues to do the Zuidas Run. I ran this a few years back, in fact one of my first races, the 4 English Mile (there’s a 4 and a 10), in 44 minutes. It was lovely seeing my colleagues/ friends again and again we had good weather so I was happy to run it. Again I started out feeling pretty fine so I just kept going. This time around I did it in 40 minutes! 40! This is really unheard of for me – 6.5KM in 40min! Normally I don’t focus too much on time but man it feels good to really run again.

The weekend after THAT I ran the 10K Stuwwalloop – pretty tough race here in my area through the woods and again uphill! Was pretty hot that day so my race time wasn’t stellar – 1:11:45 – in fact I wasn’t the LAST person in, but I was second to last. Never mind, I still came through with a smile on my face!

So yeah – lots of running in May, even though I turned my life upside down with my new job and had such bad back pain until the middle of the month. Thanks to a combination of things, I am confident that I’m back on the right track now.

So that’s the update, more for the current period coming up – more running, training and I’m sure you are wondering what is happening with Weight Watchers…???

Have you had an amazing time lately? Are you training for anything? What have you accomplished in the last couple of months?