Where did we leave off?

Oh hey! Hi! Remember me?  it’s been ages since I caught up here and while I had the best intentions we all know what that means, right? Life happens and priorities are shifted.  I have been having a good time in the meantime I can promise you that.

This was a really interesting experience for me.  I went through a range of feelings and emotions.  You should know that I am myself pretty much all the time, I don’t pretend to be something I’m not and that means I’m also showing and even speaking about the fact that I am not always so self-confident.  I went to Hamburg feeling super insecure.  I only really know Dani and not even that well (we met years ago at Fitbloggin and now she is living in Amsterdam).  The other only people I knew from the team were Nora and Janet and that was from literally running into each other at Rock’n’Roll Dublin 2017.   So yeah, I’m off to Hamburg to run 250+ kilometers with 9 people I really don’t know and I’m feeling insecure.

There really was nothing to worry about though.  We fell into the groove with each other almost right away and then we were basically off.  No turning back, right?   Everyone had different personalities and there were definitely times of stress – but this is not to be avoided when you are tired, hungry and not feeling great (we had several on the team who either didn’t feel well – including me – or had injuries rearing their ugly heads.  we had a runner who was lost on two occasions, several times we were driving the wrong way – which is so nice in the middle of the night, NOT).   In the end I am really glad to have had the opportunity, and while I’m not sure I would do it again, I am certainly not saying “never again”.

We all had 3 legs, my total mileage was around 25KM.  I was extremely nervous for my night leg, so much so that I didn’t really eat enough when I had the chance around 8pm earlier that night, and it was raining like hell pretty much off and on the whole weekend.  In the end it was my night leg that I loved the most.  It had stopped raining minutes before I started and I only had to do a 5K on a dyke around a small body of water.   The silence and the full moon shining down on the water was simply stunning.  The little beady sheep eyes looking on at me?  Less stunning but kind of funny.

After the race (which ended up North on the Wadden Sea) a few of us drove back down to Cologne where I stayed one more night.   Hanging out with my new friends in Cologne was such a great time. 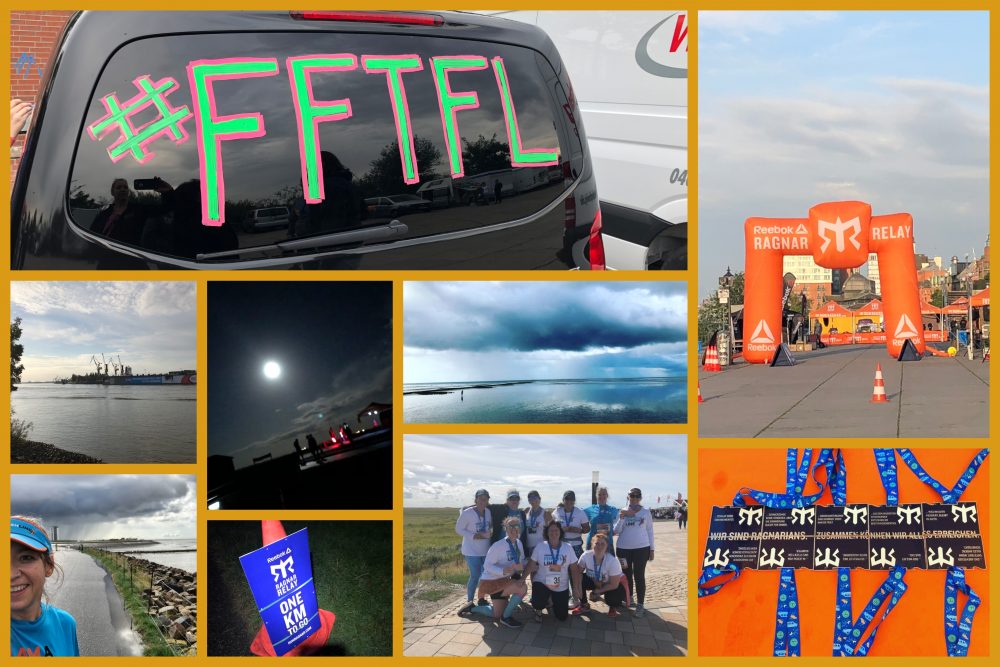 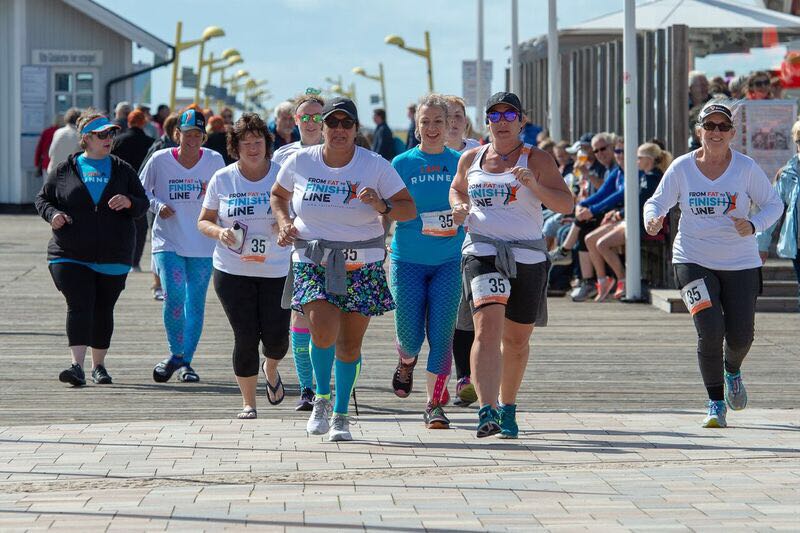 The husband gave me a lovely birthday present of a trip to warm and sunny Palermo! I had such a blast. We ran Parkrun (our 3rd) and Ron actually came in first place (it’s not a race, but for local, regular parkrunners it’s always a challenge to be number 1) which he was very happy about. We also ran our long run in Palermo up to Mount Pellegrino and back. It was supposed to be 30KM, I only managed 25 as it was hot, hot, hot and surfaces weren’t always that great to run on! We also did a city bike tour on my birthday morning and ate plenty of ice cream and cannoli. On our last full day we spent the day at the beach at Cefalu. It was absolutely amazing. Now there’s another place in Italy I have to get back to! 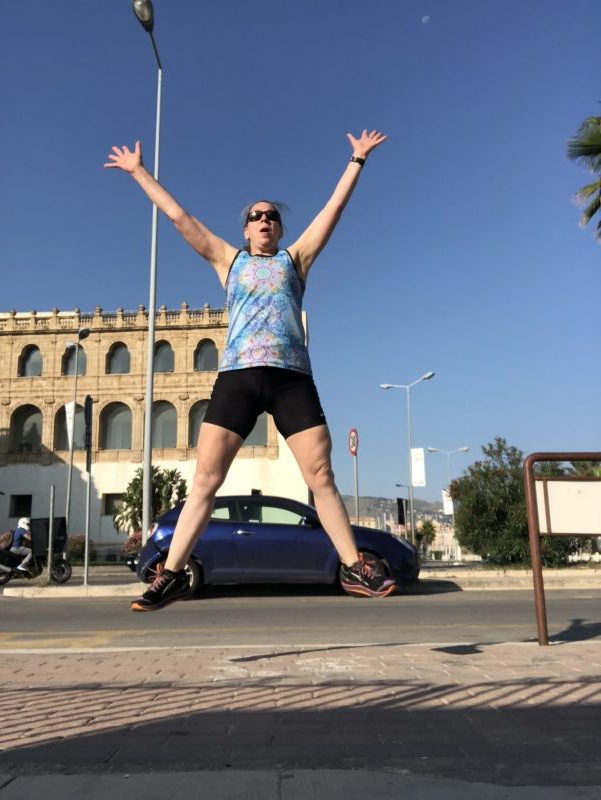 warming up for ParkRun 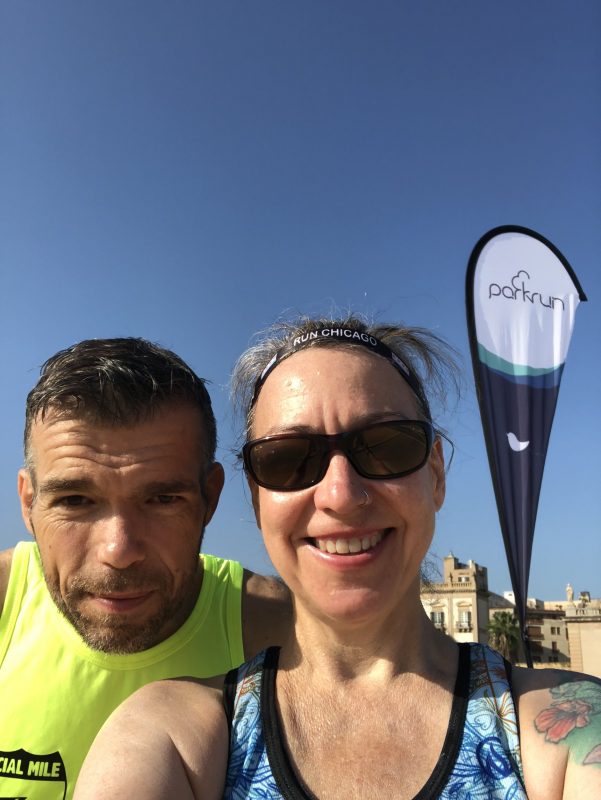 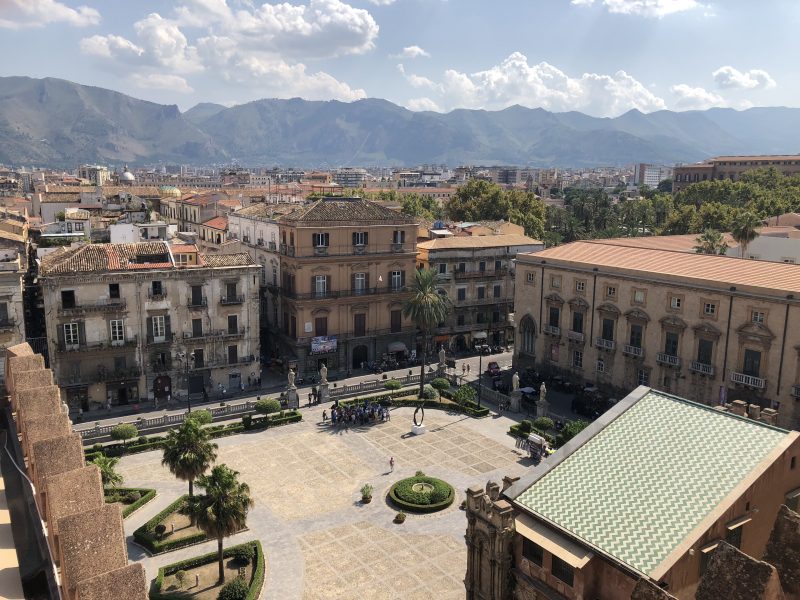 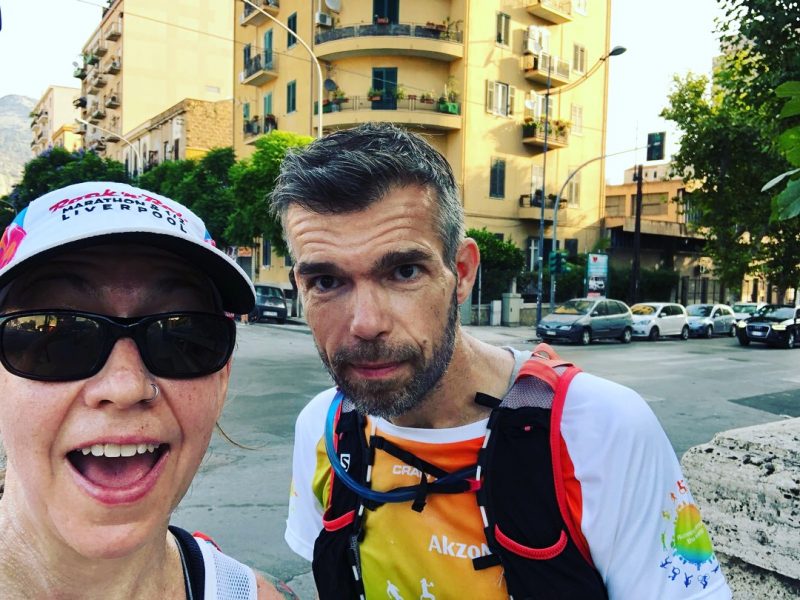 when it was still fun (haha!) 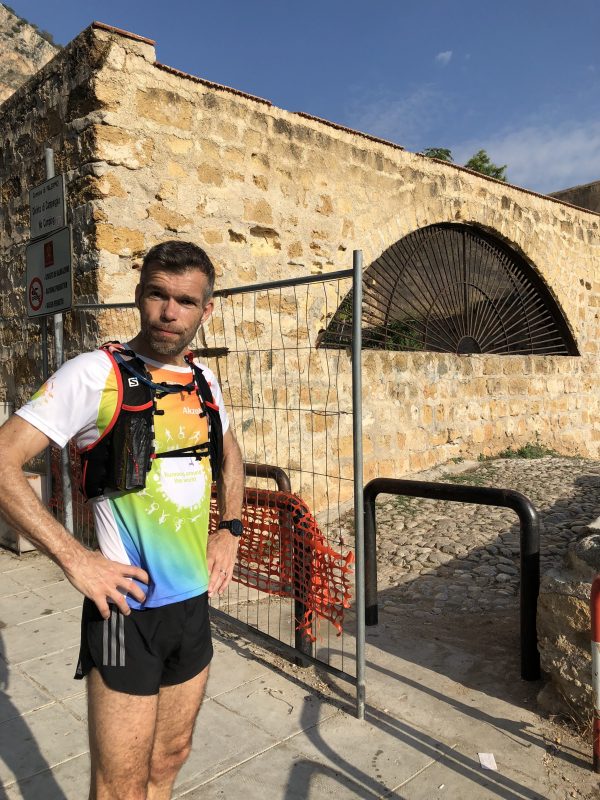 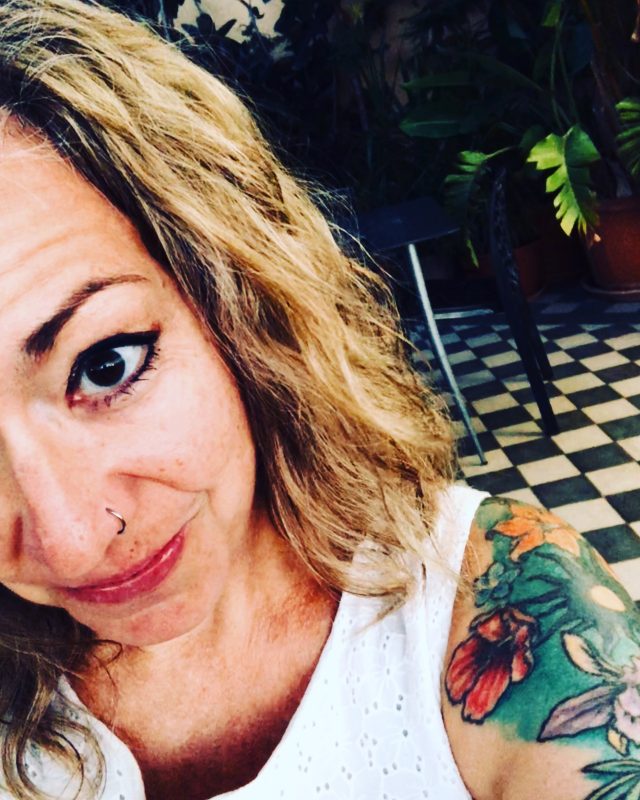 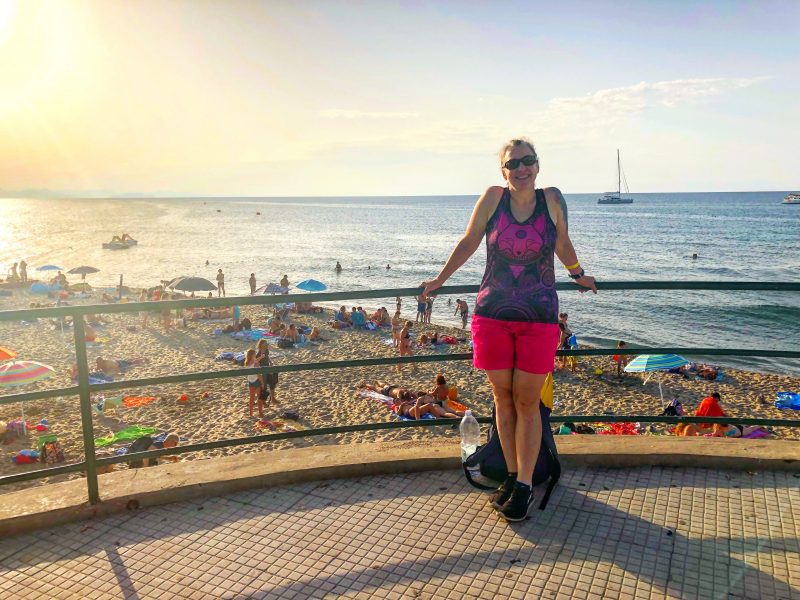 Loved the beach so much

With SO many of our friends running Berlin we couldn’t stand to NOT be there so we decided fairly spontaneously to go for the weekend. With it only being a (if you do it non-stop) 5.5 hour car ride it’s very doable (and something we’ve done a few times before) so before we left we picked up our SocialMile club flag so that our running friends would be able to spot us easily along the route.

What a blast!  We found a hotel not really in the center of it all but right next to Schlosspark so already when we arrived we changed clothes and went to do our training.  Gorgeous!   Just a few KM’s to get the legs supple again.   We discovered the hotel had bikes we could rent for just EUR 5 per day so we arranged to bike into town instead of bother with buses and u-bahns.  On the plan was dinner with some of our English friends, most of whom we know from Paris/Liverpool/Dublin races.   It was hard not to be a bit envious – Berlin is really one of my favorite cities ever and I really loved the marathon, even though my foot didn’t love me at the time I ran it!   After dinner of course we had to bike back which was  a LOT trickier than on the way in because of course now it was dark and we were not overly familiar with the bike paths. We made it back safe and sound though and before hitting the sack planned out our marathon day.

We met up with Kim in the morning  at the 5KM mark (Kim is from SocialMile and the one I ran with in Paris in my first marathon).  She and the dog were supporting the other SocialMile runners so we wanted to at least hang out together as much as possible.  It was a beautiful day!  For some too warm, but for us, just perfect.  On the second stop on the course (around 20KM) I met up with my IG friend Selda and we hung out until we went to the 3rd stop on the course (33KM) where we ran into Jayne’s husband (Jayne was running, Martin was not).   I saw so many friends on the course and I was so happy to be able to give those runners a hug who needed one at that moment.  The flag really came in handy!

After the marathon we met up again with our English friends and had celebratory beer and food.  Berlin never disappoints!

On Monday we had breakfast, chilled out a bit and then checked out of our hotel.  First we were going to run 14 – 15KM and then we would drive home.   Being envious, as I mentioned above, we ran through the park again, along the Spree and over to the Brandenburg Gate.  Still a glorious day and quite a nice run.  It took us ages to get home after that.  Neither one of us really wanted to go home, so we kept stopping for coffee, food, a pee break, etc.  (changing clothes and a wipe down happened on the first stop of course). 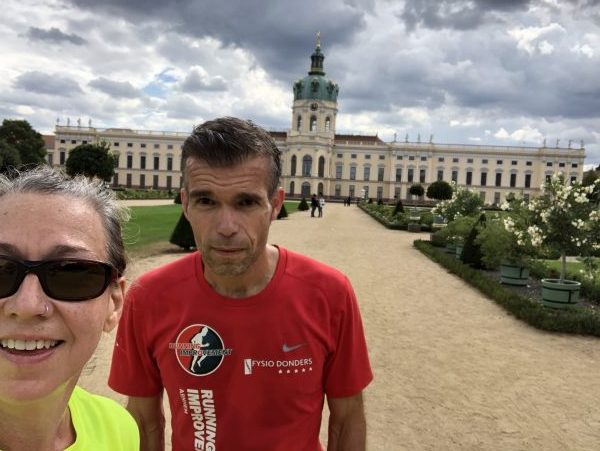 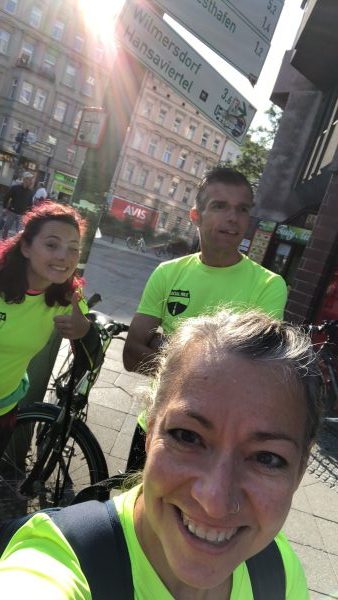 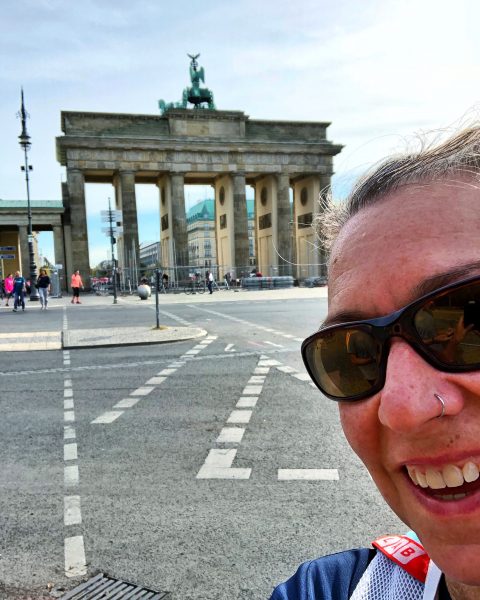 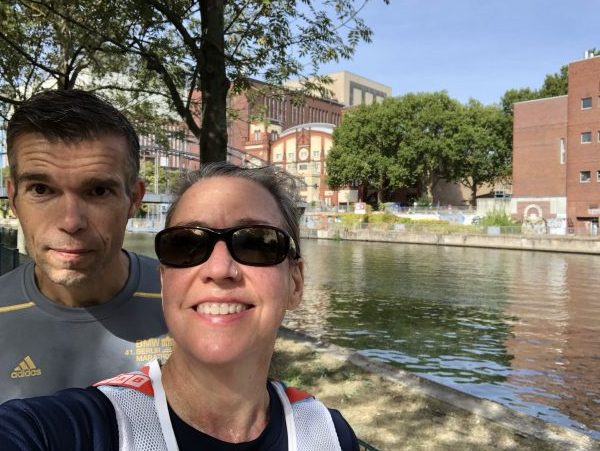 Of course the event I was training for was also about to happen.  But let’s talk about that one in another post shall we?

How’ve you been?  Any spontaneous trips or races done in the last several weeks?