On Sunday, Hubs and I went to Amsterdam to run in the Zuidas Business Run 2010.  There were two courses we could sign up for, a 16K and a 6K.  Considering the fact that we had only just done a 12K the month before and that was the maximum that either of us had ever run, we didn’t think it would be a great idea to go for a 16K.  Also considering the fact that Hubs does not get to train as much as I do because of school and work commitments, it wasn’t realistic at all.  So we signed on to do the 6K.

Of course we had trained, but at this stage a 6K is kind of like a workout.  I know for some people 6K is a lot and trust me, knowing that I only could run about 1 minute at a time this time last year before I had to start walking again, I am not taking this for granted at all.  Fact is, at this stage, if I don’t do 6K as a workout, then I really am not making any effort at all.  6K is a little bit more than 2 rounds around our park.  It’s 40 minutes of exercise.  If I went to the gym I would do let’s say 20 minutes on the elliptical and 20 minutes on the treadmill or bike.  At this stage in my fitness level this is just how it is (On that note, I know people who do 10K regularly as just their workout.  I would love to be at that stage but 10K would take me more than 1 hour and sometimes I don’t have time for that).

Anyway… training up to the 6K wasn’t really going that well.  I hadn’t really run a full half an hour without stopping for a good two weeks prior to this event and to be honest, though I was ready, I wasn’t really looking forward to it.  I really wanted to do the run in 40 – 45 minutes, but once I made that decision I had actually done it twice at 38 minutes.  When things weren’t going that well I thought I really wouldn’t make this personal goal.  I also wanted to train at least twice before the event and I managed only once.  At that point I thought, “Ok, well, just go and do your best.  You can’t do more than your best.”

On Sunday we woke up pretty early.  Our journey to Amsterdam started around 9.20 with bus and train.  The 12K started at 11.30 and we wanted to see our team mates off who were participating.  What was cool was that it was happening right outside the station that we needed to be at so our 11.10 arrival gave us plenty of time to find them.  11.30 came and they were off.  We spent the next hour just hanging out, eating our peanut butter sandwiches and getting excited about our race.

At around the almost-hour mark runners started coming over the finish line (10 miles / 16 K in an hour!!) so we stood at the finish line cheering them on.  I figured that my Big Encourager (M), would be in around 1 hour and 15 minutes.  At 1:18 there he was – the first one from our team.  About 7 minutes later was V, my colleague who ran the NYC marathon just last year – the 2nd from our team and the first female.  Not surprising at all really, these are our team superstars.  (V actually told me she hadn’t trained for 3 months.  3 months!!  And then just ran 16K!!  Amazing!)

It was pretty warm out and I noticed right away in my breathing that I was definitely not used to daytime running!  I thought also that I hadn’t hydrated enough the days before and certainly not that day (because let’s face it, we all know that runners have bladder issues and I really wasn’t in the mood to pee my pants during the race), but there were no water stands along the way for us at all.  I was so incredibly thirsty, overheated and sweating like a pig.  The good part of the race was that I beat a seemingly fit male colleague.  Also it was a fairly easy route to run, though the negative would be that a part of the run was in Amstel Park and we had to run through families relaxing and walking around that area.

I had to walk a few bits of the run.  I really didn’t want to but I had to.  I crossed at 43.  Still within the range but I know I can do better.  In hindsight (and after using my brand spanking new Polar heart rate monitor) I ran too fast at the beginning.  I need to learn how to pace myself.  Next run will be better because I have a long time to train and to learn what my best pace is for endurance (next run is 16K in September).

A few colleagues were there to cheer us in and straight afterwards we hit the beer tent.  After all, what’s a good run worth if you can’t have an ice cold Heineken afterwards.

M has a video of me crossing the line, but hasn’t uploaded it yet.  As soon as I have it I will share it with you.  Until then, here I am coming in (hubs took the photo and you can see M making a video on the other side of me). 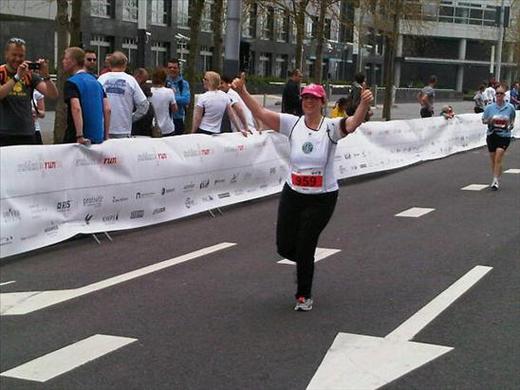 I am definitely getting hooked on this running thing!