It’s been quite a while since my regular Sunday afternoon runs and I have to say, I’ve missed it. I did run whilst in New Mexico, that was a totally different experience. Prior to my holiday I’d lost a bit of that “oomph” that I normally have to go running and I think it’s now safe to say that my “oomph” is back!

This week I actually did a bit of cycling, but haven’t made it back to the gym. I think the cycling has kept my legs and perhaps my whole body at a good enough condition to not have to start over too much with running. As I’m totally burnt out by the park, I decided to go to Westervoort again, a village that’s only about 2KM walk from my apartment. It was an absolutely gorgeous day for it and I wanted to experience the dikes in a different light (the last time was in serious winter conditions). 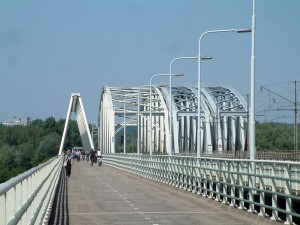 I started off by walking about 1.5KM to get properly warmed up. As I crossed the road over to the side where the bicycle path is on the bridge I started my run. I told myself that if it was too much that it was totally ok to walk a bit. Before I even reached the end of the bridge I’d hit 1 KM. My goal was to do 8KM.

Because it was so nice out there were tons of people out as well! lots of walkers and bicyclists along the dikes – I loved it! I cut through some farms at one point to head back as I had already reached halfway point by then. I couldn’t believe I was still running at 5KM and then 6KM! As I approached the bridge to go back I was feeling it in my derriere. I had to cross the busy road again so at that point I decided to walk. That was at 7.5KM so I cooled down for the rest of the 8K training and walked another 1KM home.

It feels good to run again. I was starting to panic a bit about the Zaandvoort Circuit Run 12K that I’m signed up for next week, but now I know it’s really going to be fine. This is a special race for me, it’s the very first one I did one year ago and now I’m really looking forward to it!

I haven’t done any real training for the Half-Marathon in April and to be honest I’m not so sure I’m going to be able to do a real proper program at this point. I’m just going to keep running, building up to long runs, dropping back, doing some cross training. It won’t be ideal, but the fact that I’m doing it is way better than not doing it at all.

Running in Westervoort has inspired me to sign up for the Westervoort Midzomerrun on the 3rd of July – I’ll participate in the 10K. Why not? It’s practically like running in my back yard!