(I realize now I haven’t even done a race re-cap for Groet aan Schoorl, the race I did in February…)

This past Sunday I participated in the 4th annual Zandvoort Circuit Run, a race near and dear to my heart as it’s the first race I’ve ever participated in last year. That’s right, my very first race wasn’t a 5K or a 10K, no I had to go straight for the 12K. I remember being extremely nervous about it, not knowing what to expect, except for being freaked out about the 3KM I would have to run on the beach. I remember also at that point, I had only been running for about a year AND I’d had an operation on my foot just four months prior to the event. I was (and still am) on my company’s running team and we were ALL doing the 12K and raising money for charity.

This year, my anniversary race, was a different experience. First of all, I have I think 8 or 9 races under my belt, so I don’t feel super nervous anymore. Secondly, this year my team was split up, some of us doing the 5k and some doing the 12K. I remember last year I had too much stuff with me and I felt uncomfortable leaving things behind (even though we had a special place to put everything). This year I could bring whatever I wanted because Hubs decided he was well enough (untrained) to do the 5K and I was signed up for the 12. These races started at different times so we didn’t have to leave our stuff anywhere. Last year I didn’t even think about bringing dry clothes with me, or extra food, this year I was fully prepared, plus I was able to bring my camera! 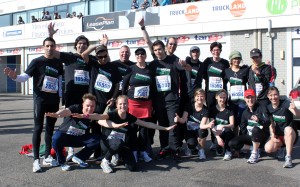 Hubs at Left, M with sunglasses 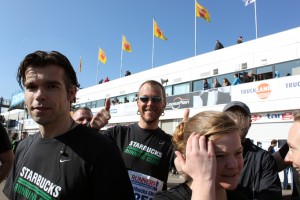 A tiny part of the circuit 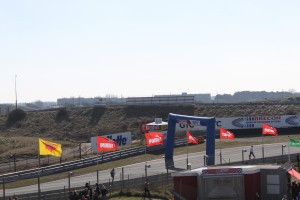 Getting ready in our corral 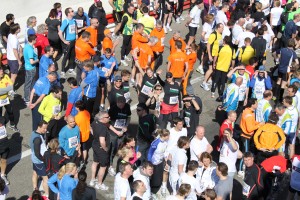 This time was also different because the weather was AMAZING! Last year was grey and cold and windy, but Sunday was blue skies and sun! It was still a bit cool out, but while running it was pretty darn hot! We started on the racing circuit (the 5K our guys ran the hour before, but we only did 4K of it) which I still found rather challenging. I notice that people generally start off at the speed of light and last year I felt kind of intimidated by it all… now that I know myself and I know what my pace is, I just went at a pace I could handle up and around the curves of the track. I was already incredibly hot just after even 10 minutes and dying of thirst (which rarely happens!!) so I knew I had to pace myself to make it through to the first water station without losing it!

The Masses before the start 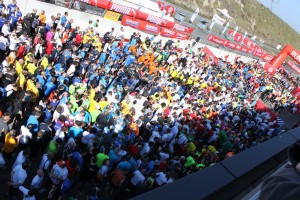 Last year the beach was impossible, really; people were falling all over the place, even one of my team mates was pushed down (and she got up, chased after the guy and punched him in the face…). I had to walk a lot of the beach part just because it was so difficult and I’d never run on the beach before. This time the beach was perfect for the most part! Packed sand and pretty easy to maneuver. It was so gorgeous and I felt really privileged to be taking part of this event at that very moment. 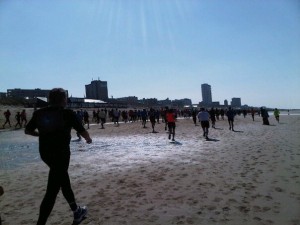 I ran the whole beach part (approx 3 KM) until the dune at the end that we had to go up and that I had to walk (I may never know what it’s like to RUN up a sand dune!). I caught my breath at the top and carried on, passing the 8 KM mark noticing the time was pretty favourable at that point. Then we ran through the town – this is my favourite part of the course; people everywhere, cheering, marching bands playing, such a great vibe. A few times I “ran into” one of my team mates, checked in with each other (thumbs up, question mark look on face, thumbs up in return, nods) but around 10K he was walking a bit and I decided to just go for it. 2K to go it had to be a piece of cake from there… 11K home stretch, and then crossing the line at 12K at 1:25:23 exactly 3 minutes earlier than last year. YES!

Afterwards we caught up with several team members and had a look at the charity we had raised money for this year, Shelter Box, in which our team personally obtained 10 boxes (and 800 are going to Japan this week) AND I ran into a couple of girls who also had skirts on from www.runningskirts.com, but found out they actually sell those skirts here in the Netherlands at Hiphardlopen. No more having to order from the States! Whoo Hoo!

We headed off to the boulevard to enjoy post-race beers and a chat (me, Hubs, my running inspiration M, his boyfriend and another colleague from work) and too soon we had to leave the West again to return home. 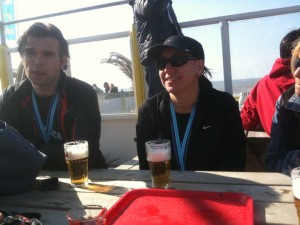 Next race is the Half-Marathon in Utrecht, which I’m totally unprepared for, but am going to do anyway. There is something I am also coming to terms with; I really can not go much faster than I did one year ago (I can run for longer periods, but not really faster), and I’m sure it’s my weight that keeps me from that. In accepting this, the importance becomes more about doing it rather than having amazing time. If I finish the Half within 2:30 I will be happy with that. The point is to keep going. I can be angry and hate my body for giving up on me (in not losing any more weight) or I can embrace and be amazed that my body can run, bike, walk. I’m active, I’m enjoying it and I’m committed and that’s what counts, right?

Other races: Zuidas in Amsterdam (8K), end of May, Westervoort (10K) in July, Dam tot Damloop in September (16K), Seven Hills (15K) in Nijmegen in November. I’m actually considering other races but haven’t signed up and/or committed in my head yet to them. I think it would actually be nice at this point to do a race a month. Stay tuned.