I have four posts in my drafts for my blog, so at least there’s been an attempt to write. It’s been particularly mental the past month – September always is anyway at work (I work in finance, it’s year-end), and socially it was busy as well.

My birthday weekend was spent with my family – normally we end up not having the kids on my birthday so Hubs and I usually just spend it together, but somehow our schedule ended up that we were the four of us together! The kids are older now, but they always have been pretty easy going (I’m a very lucky stepmom if you ask me; the “normal” horror stories don’t apply to me or my kids, the ex, Hubs, etc.) and it’s quite pleasant going out with them. The Girl and I even did our nails the same and got glammed up and we all went out for Japanese! Yum!

The next weekend Hubs and I were off to Belfast. Every year we go away as my “gift” – remember last year we went to Rome? Neither one of us had ever been to Belfast and hubs had never even been to Ireland –it was a great deal for flight and hotel so we decided to go for it! Our friend M (you’ve seen/heard about her before) joined us as well which is always loads of fun. We did a lot of touristy stuff, hit quite a few pubs, had some good food and walked a LOT. The highlight was probably the Giant’s Causeway – in a word: Incredible! 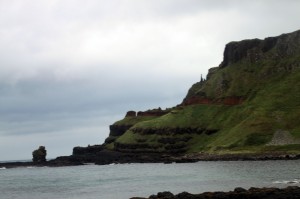 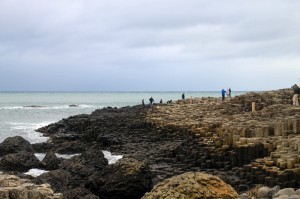 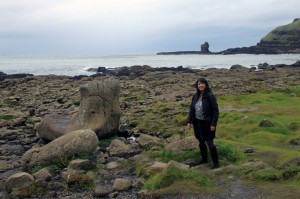 After I returned, it was back to work and back to Hell Month. I found out that I’d been nominated to go to Berlin for a special event that was happening for my company the next week! I was over the moon! Not only is Berlin one of my favourite cities ever, it was a chance to be in an open forum and actually ask questions and even meet our CEO! But did I mention it was Hell Month? Yeah, the timing was awful, but HELL YEAH I was going!

Prior to that though… I had the Leontien Ladies Ride – 70KM for Stichting Pink Ribbon. I have to say I was not looking forward to it anymore. I was exhausted from work and didn’t feel like I’d really taken all of my opportunities to ride my bike and be fully prepared. Plus it was turning out that my family wasn’t going to be able to come with me – we’d originally thought we’d all go down the Saturday before, spend the day and stay over in a hotel, but it was just too expensive, plus we also thought, yeah, all day Saturday, then they’d have to hang out all day Sunday as well…I was going to have to get up pretty early on Sunday and get my bike on the train to Den Bosch on my own. I don’t mind doing stuff alone, but at this point I just wasn’t feeling it. Even that morning Hubs thought I may not make it – I was rushing, left late, then had to call him while I was on my way to the station because I couldn’t even remember if I locked our storage area or not (I was struggling getting everything in my bike bags, late, stressed). But I made it and after a rocky start (like, literally finding the start), I began my 70KM ride with thousands of other ladies. Admittedly, it was tough for me to be “stuck” behind so many people on the bike paths – I like to go at my own pace, but obviously, in this case I was only as fast as the slowest group in front of me! Eventually I made it to the lunch break stop (at Land van Ooit) to pick up my lunch packet and have a little bio-break. At this point we were at around 28KM. I probably was off my bike maybe 15 minutes when it looked like it was going to rain in the distance, so I layered up on clothes and decided to head off. This time I was wonderfully pretty much on my own! The day started off as a beautiful, kind of chilly late summer day but about halfway the heavens just opened up and dumped a mass amount of rain and hail the size of ping pong balls on us! I stopped before the hail to put my rain gear on, but after three minutes I had to just pull over and wait under a shop awning, it was too much.

Then it just stopped.

And the sun came out again!

So I took off my rain gear, re-packed it in the bike bag and headed off again. For about 20KM I was blissfully alone, cycling through such a gorgeous area of Brabant, up until the point where the “short-route” ladies met up with our route, then I had to slow down again. My family was following me on my GPS, but unfortunately it wasn’t correct so when I crossed over the finish they thought I still had 7KM to go. No one was there to meet me :( I felt bad that they made the trip down on their own to see me and then ended up not anywhere near the finish when I came over.

Sidenote – I bought cycling shoes. I have to say I was not convinced (but spend the cash anyway) but actually found they made a huge difference on the bike! Usually I just wear my mary janes but they do slip on the pedals and I didn’t even think about whether my feet were sturdy or not. Cycling shoes really keep your feet stable and don’t slip for the most part, so I’m really glad I invested in them! (Side to the sidenote: I most certainly wasn’t the only one in a skirt, but I did wear bike shorts and tights underneath – for this distance I do find bike shorts a complete necessity) 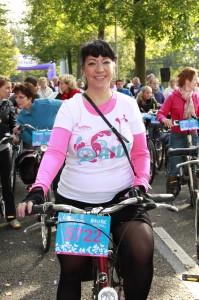 Anyway. All in all it was nice. The family and I had something to eat and drink and then Hubs took the kids back to their mum’s…. it was time for me to get back to Arnhem with my bike on the train. I did a total of about 80KM with the round trip cycling to and from the train stations – the most KM I”ve done in one day to date! I would definitely like to up this mileage, I just don’t know when – I may need to get some better biking clothes.

Next Posts Berlin, Work Event, Social Weekend, Arnhem Food Fair and then I might even talk about what’s going on in the weight and exercise areas…