Did I tell you guys I also got to meet Tara and Meegan? 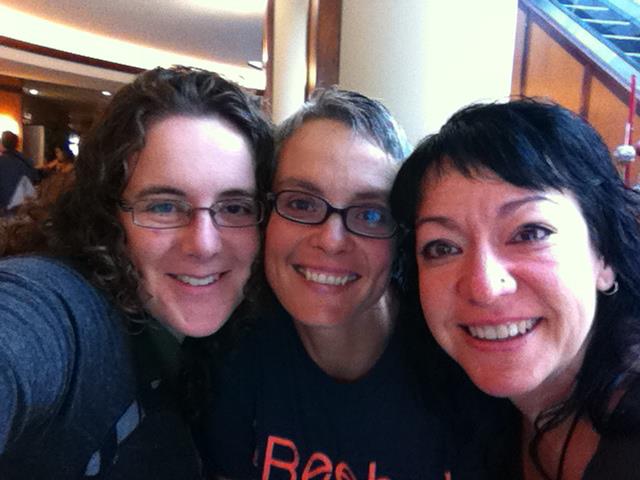 So Saturday I somehow messed up the clock on my phone and was up 1 hour earlier than planned but still too late for the 6am Boot Camp (yeah that was never going to happen anyway). In fact we were all up within about a half an hour of each other and managed to go downstairs for breakfast. There was a jump fitness class scheduled that I decided also NOT to participate in. Jumping on a trampoline and my bladder do not mix! It looked like great fun though! 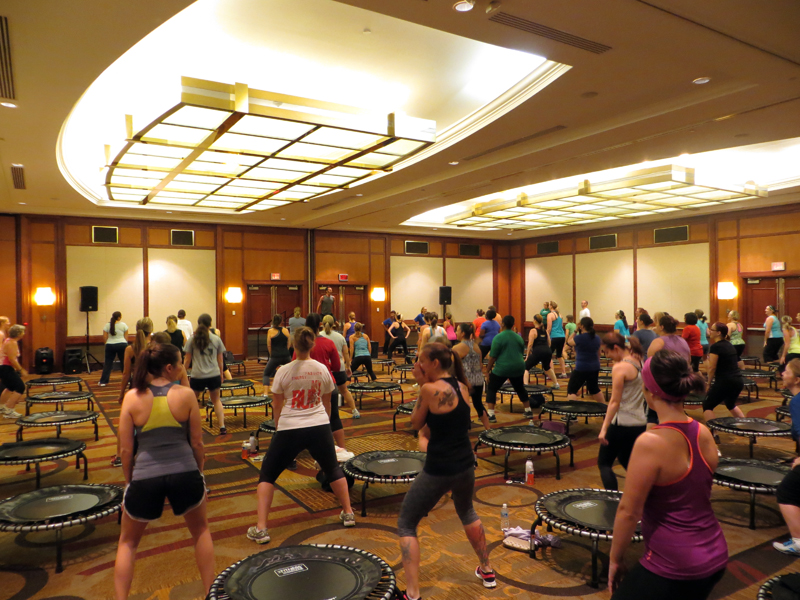 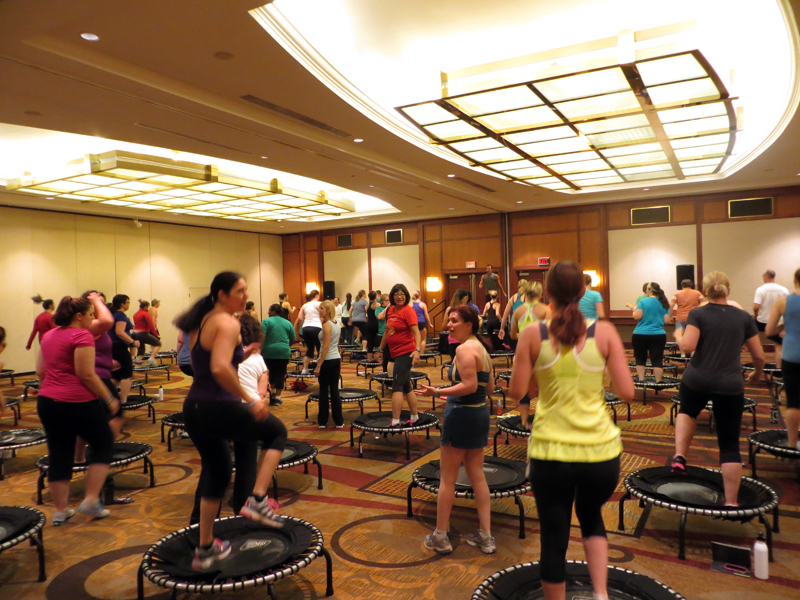 After jump fitness was Sue and Sam‘s Zumba class! I have done Zumba before and this wasn’t much different than the classes I’ve been to, with the exception that the moves weren’t really explained, just performed. Tons of energy though, loved both of them and was totally impressed with their mad gyrating skillz! I’m unsure if I would continue Zumba here at home, mainly because I have limited time, however if anyone has a DVD recommendation, I’m open.

After class more chatting, snacks and of course coffee (I think Michelle was concerned with my coffee consumption; not to worry, I am in fact a professional) and then upstairs for a shower.

In the afternoon, I attended “When you have a lot to lose” which to be honest I was afraid I didn’t really belong – as I mentioned before, I’m not one of those people who had/has to lose more than 100 lbs and I haven’t been overweight my whole life. I have however had body image issues since I was 10, however and I believed I was “fat” and “ugly” and abused my body pretty badly for a good chunk of my life.

When you sit in a session like this and you hear people telling their stories you soon realize that issues faced are not only for people with a lot to lose. I identified with so many people. I told myself I wasn’t going to cry yet I was already in tears when Nikki spoke. Then when Alan spoke up I completely lost it. Not because I’ve been through the same thing with Nikki or Alan or Amy or Kenlie – I cried because I really felt love and compassion in my heart for them and hated to know they had suffered or were currently suffering. In a way if one of us is suffering and it affects us so deeply, does it matter that we have 10 or 100 lbs to lose?

From there many of us just sort of floated around, talking with each other, taking pictures, participating in fun things like the Grow Soul Beautiful Yoga poses and Oakley’s Performing Beautifully campaign where several of us received a pair of sunglasses. I also got to speak to Annelies from Attune Foods, turns out she’s half -Dutch and even had relatives that lived in or around Arnhem! How cool is that?? 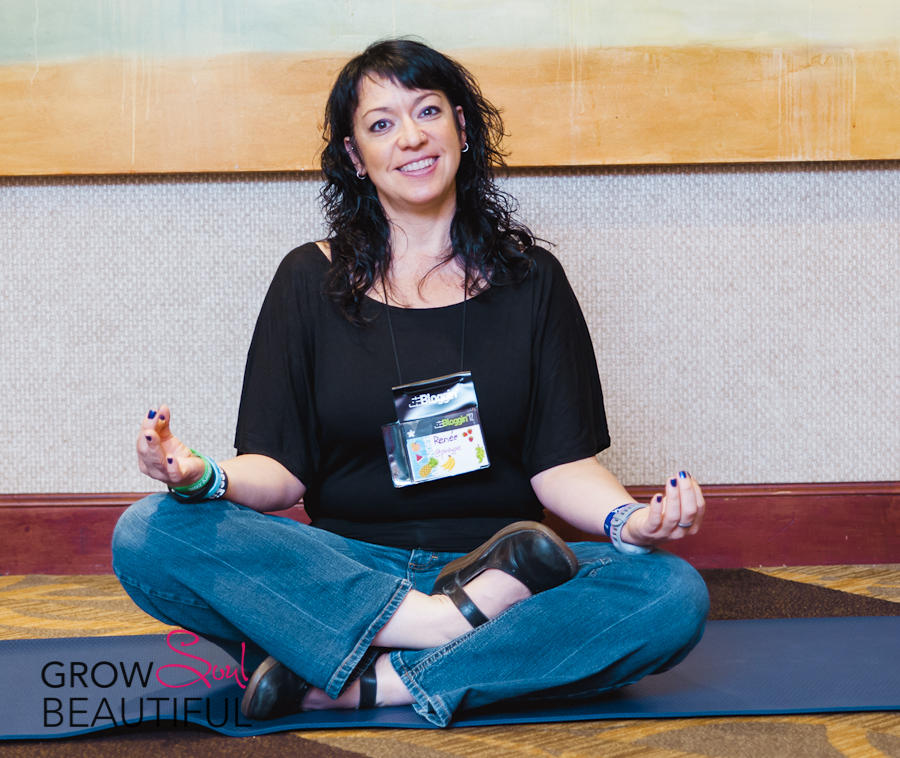 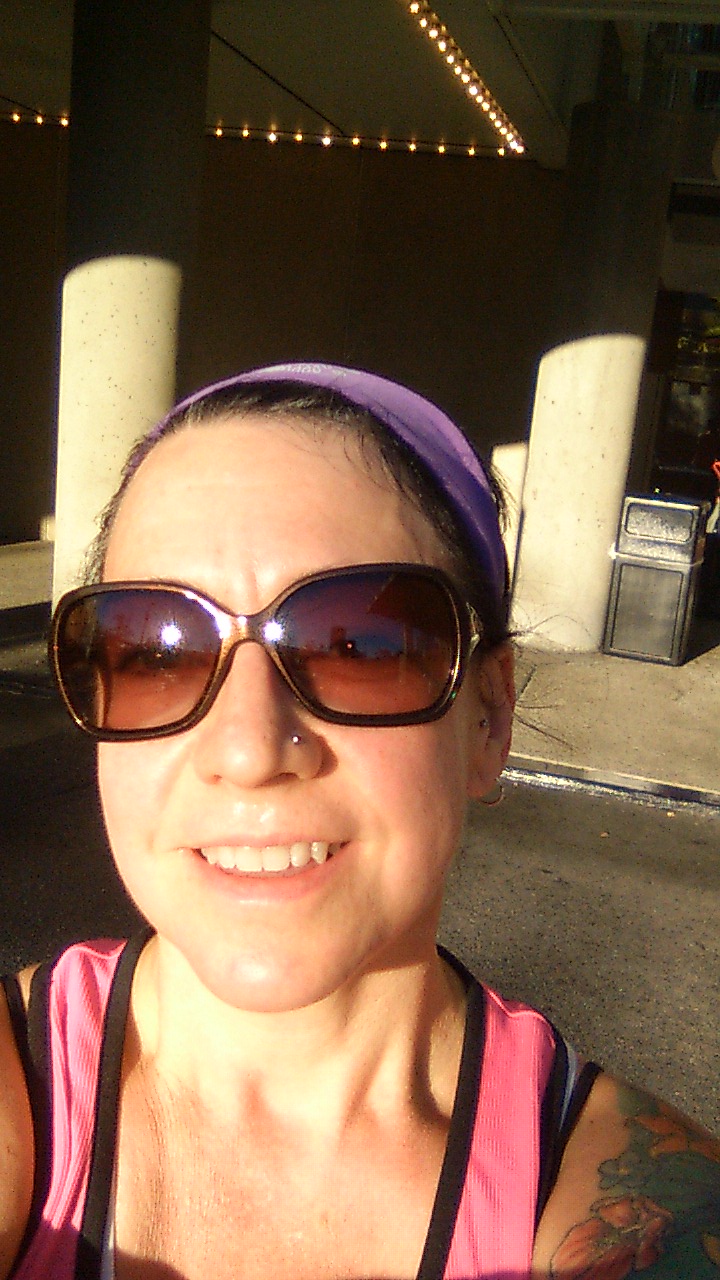 At some point the four of us roomies went out for dinner where I had crab cakes (again), beer, corn on the cob and other noshables when suddenly the wind kicked up and the heavens opened up, with an umbrella from another table nearly knocking Robby’s eye out (I’ve decided that it’s always exciting with Robby no matter what) and slightly dinging Michelle’s shoulder. Luckily we all lived with a silent moment of “thank dog that didn’t actually go in Robby’s eye…”

After dinner was the reception, which was, in my opinion more promotional stuff (things to win, coupons and goody bags to take home) a free drink (or two if you were lucky to have someone give you a drink ticket) and some food items (that I didn’t participate in, because I just had dinner – though I had a two bites of potato something or another and 2 bites of a cupcake I think) but mostly it was about talking to newly made friends, mingling and getting more photos (something I regret I didn’t do much of).

And the end of the reception we were going to go to the bar with our own wine, only to find out we couldn’t go to the bar because some local football team was in town. We ended up talking to Mark from the Biggest Loser (at home winner, season 10) as I had actually been in a few tweets with him earlier so I wanted to introduce myself to him so he could put a face with the tweet. Since we weren’t really able to go to the bar, the responsible ones went upstairs to bed, where we prepared for the next morning’s early alarm – the 5K was taking place at 7am!

Look at these peeps ready to go for the 5K! Even the trainer thought it was too early to be photographed! loving the start, it truly was a beautiful morning in Baltimore My last post on Fitbloggin will probably be scattered with thoughts, swag, other friends I was happy to meet and the rest of the day, saying goodbye and the long journey home.