I don’t know how else to describe this month.

In my case it means a lot of different things. Good. Bad. Stressed. Busy. Exhausted.

First of all, the work thing is just insane. I can’t really give you too many details but the stress has just been incredible. I have worked a lot of extra hours and had hardly any time to train. Because, you know, I’m running a half-marathon in a week… I pretty much haven’t followed any plan at all this time around, but I have to say I’m not really worried about it, I still think I can accomplish it within 2.5 hours. Still the stress hasn’t been good for me. I have felt on many occasion that I was about to explode. You know, when your blood pressure is so high you think your eyeballs are going to pop out? Yeah, that. Hopefully this is going to calm down soon. I would love to have my life back. I haven’t been to the gym in ages and I’m still stress eating, which I really hate, though I have to say it’s less than a couple of weeks ago.

As you know I did the Tilburg 10 Miles on the 1st of September (haven’t used my gift cards yet, but, will be buying new sports bras soon!), on the 8th of September I did the Arnhem Bridge to Bridge, which I’ve now done 3 times… however, I’ve also done three different distances! We initially thought the weather was going to be crap, and when I woke up in the morning, it was raining but then right when we arrived in town to meet up with Samantha and Alex, it cleared up. It actually turned out to be a really sunny, beautiful day. Oh and we met up with Babette as well, and I finally got to meet Marco who I’ve been chatting with for quite some time now on Twitter. 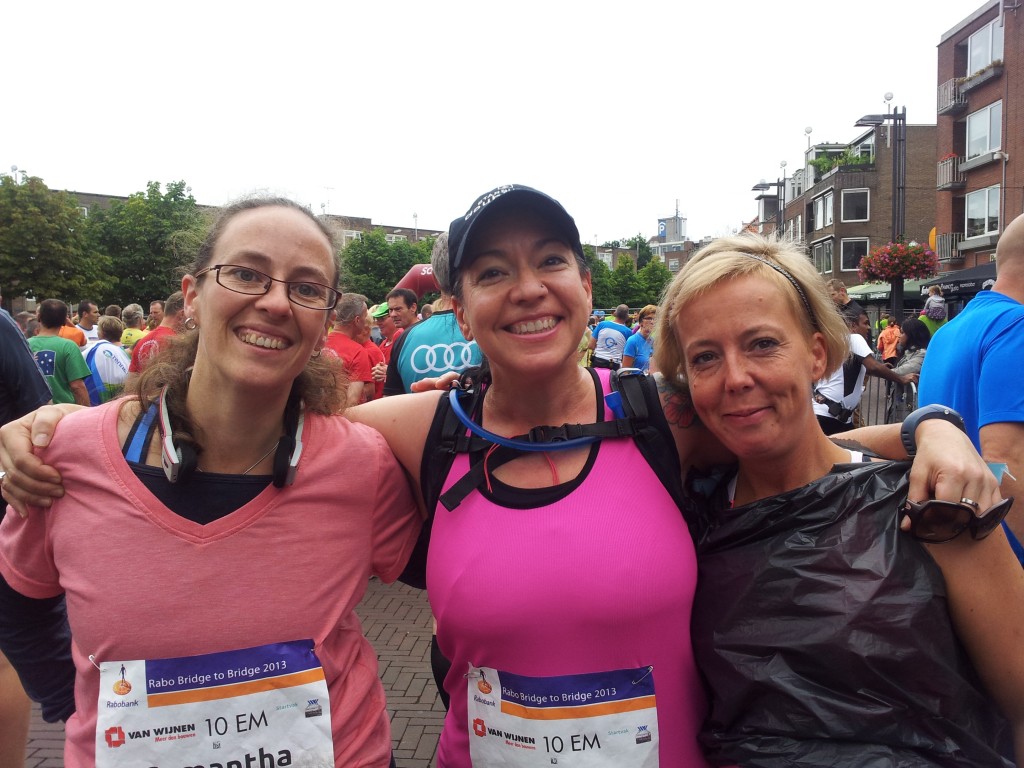 Sam, me and Babette, ready to start! 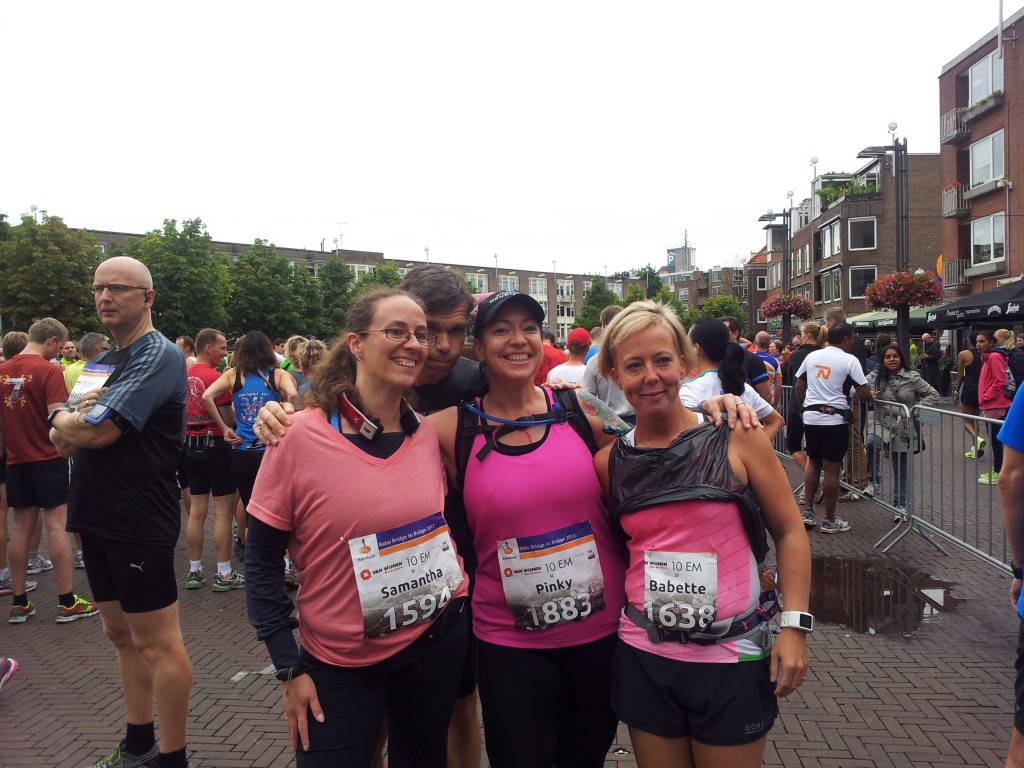 The Hubs sneaks in with the girls

So proud of my girl too, she did the 3 Mile run after we did our 10 Miles. 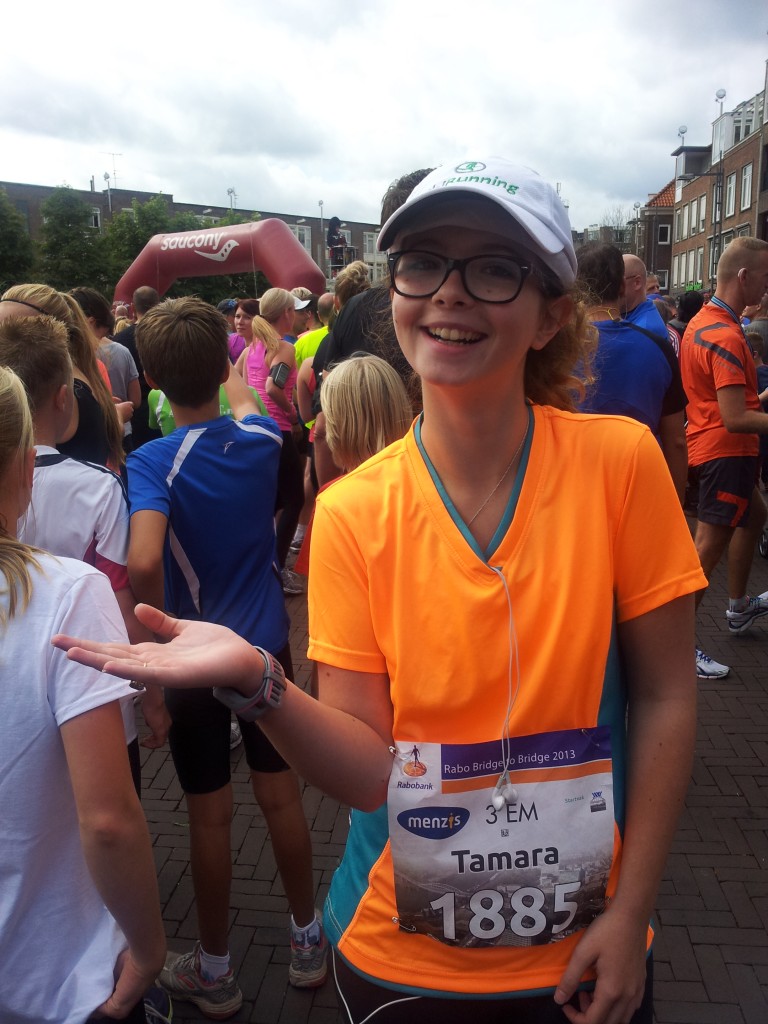 The Girl is ready to rock and roll!

and my friend Mike ran the 6 miles so after we were all done with running we of course had some nice, ice cold beer! 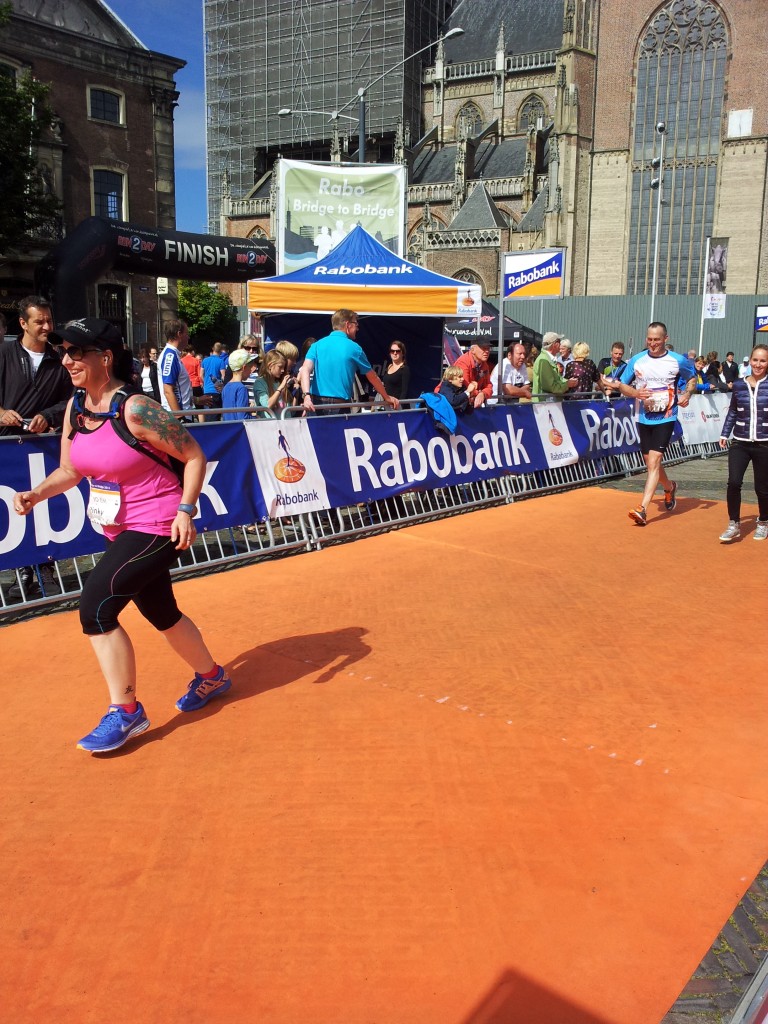 Running towards the cold beer taps!

The next weekend I had an EPIC bike ride with my friend Penny. This was my third year to do the Leontien Ladies Ride and this time in Rotterdam. Again the weather hadn’t been great but then luckily the day of our ride it was beautiful out! We both arrived in plenty of time to find our way to the festival area and Penny made us the coolest tutu’s to wear during the event too. However, it wasn’t all smooth sailing… right when we arrived, several of Penny’s spokes broke on her back wheel. There was quite some stress and panic. There were bikes to rent but they were all reserved. We tried calling the emergency bike repair service and eventually found them on site, but they couldn’t fix her bike. Eventually we were able to get a bike for Penny but we had to wait until ALL of the reserved bikes were picked up. But, whoah, what a relief to finally get a bike and start! 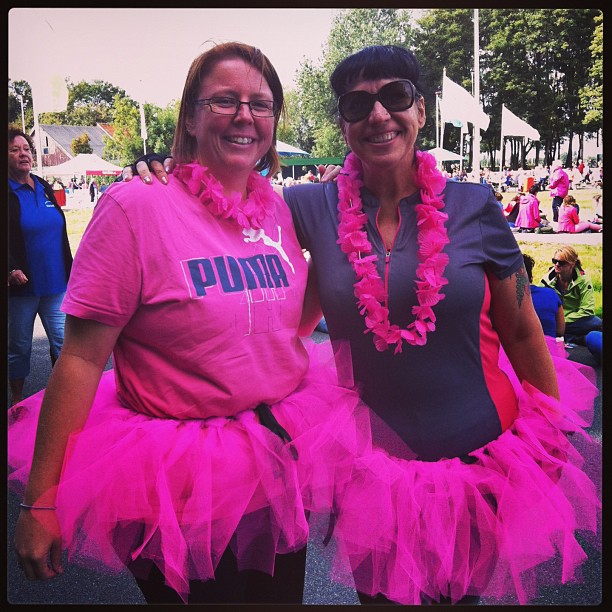 at the lunch break area, still super happy we actually got to ride! 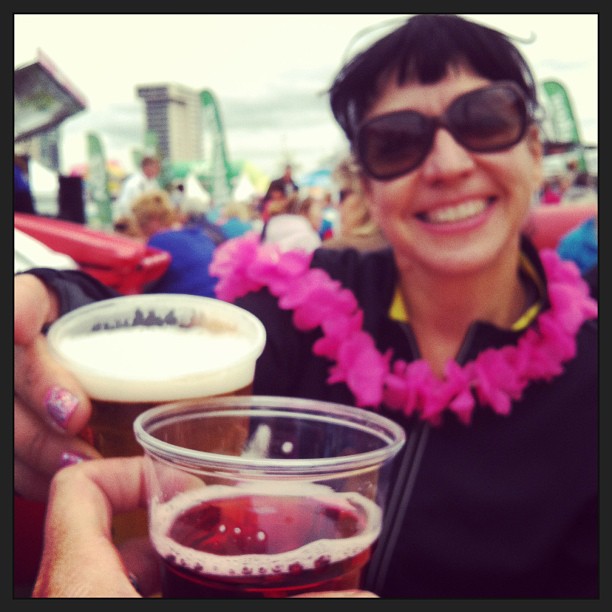 celebrating our 35K ride together in Rotterdam

The next week I did the Dam tot damloop and this was also another stress in itself since we were running as a work team and my trusted Team Partner was on holiday AND ended up being sick, thus not running at all. And try organising 20 people to all show up at the same time in the same place and get professional tee shirts ordered all in 2 weeks time… but I did it, amazingly enough and everyone showed up so I can feel good about that.

Again, we were really lucky with the weather. In fact, it was quite warm! This was my 2nd time I running the D2D and this time was a totally different experience. The first time I ran it was in 2010 and I have to say it, to toot my own horn I’m way fitter and a much better runner now than I was back then. And, lucky me, my friend M wasn’t able to run so Babette took his place and ran with me the whole time (she’s much faster than me usually), making it so that I actually made my best time for a 10 miler ever at 1:46:24. Babette was an awesome pacer and cheerleader, I wish I could take her with me to every race!

Hubs beat his B2B time by about a minute and was actually #1 on our Team (we had two teams participating) and #2 of 20 overall on both teams. He’s like a machine!!

As per usual, there was the reward waiting for us at the end – 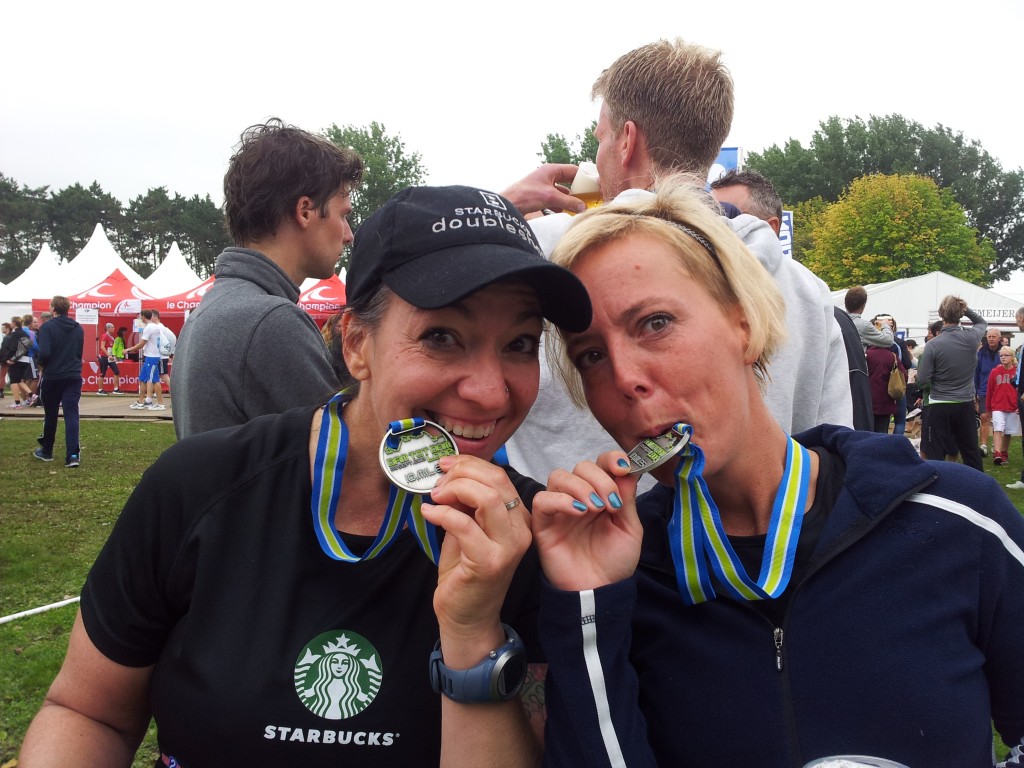 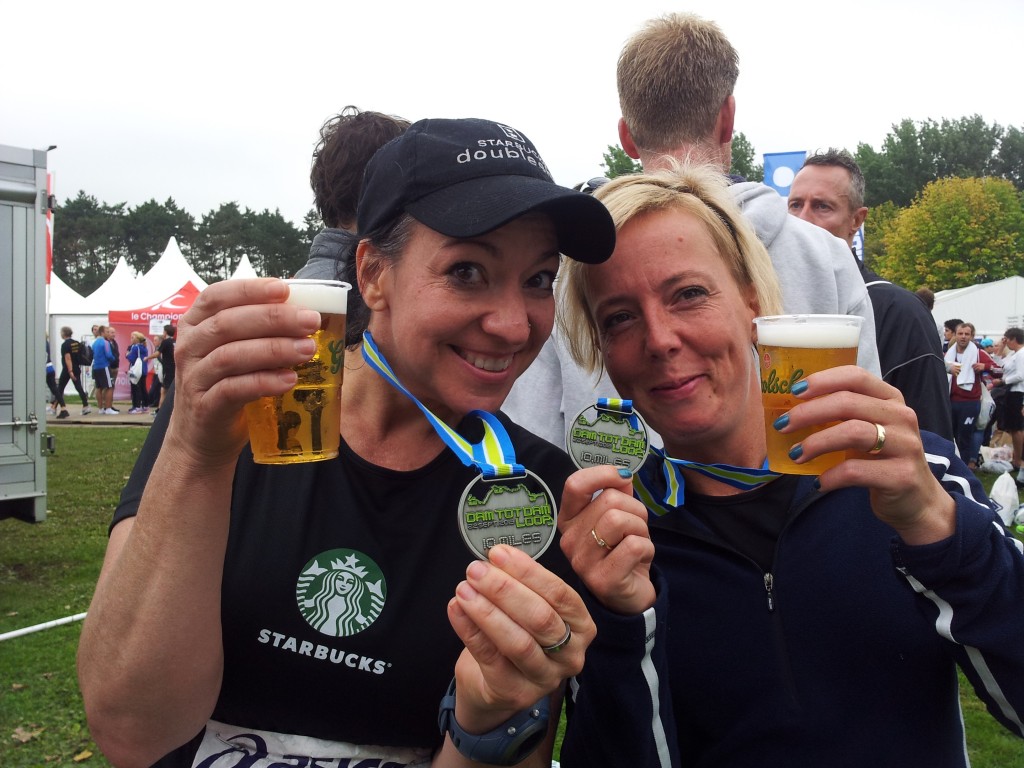 So, would you believe it, I’m doing another race tomorrow! A 15K, here close to home, the Posbankloop. Hubs really wanted to run this and I told him I would join, but I can tell you… this one is NOT going to be easy! Oh well, another “training” run before Lisbon, eh?

Have you ever done so many events in one month? Do you think I’m crazy to have basically 6 weeks of events in a row?

Pretty sure I am taking a break after this but… knowing me, I will get tempted to do another race soon… let’s see what happens!