It’s Friday, but no Friday Five from me today. wah wah wah…. Instead I bring you the recap that was January.

January was a fairly decent start.  I would like to see some improvements.  I would like to manage my time well and I would like to sleep enough.  Managing my life seems to be a bit of a challenge.    I do feel good about all I did this month though especially with my office job, my massage gig, working out, attempting to eat well and even doing the Burpees, Planks and Push-ups challenge (I think it’s the FIRST time I’ve actually completed a challenge, unless you count the Marcothon that happens each December). 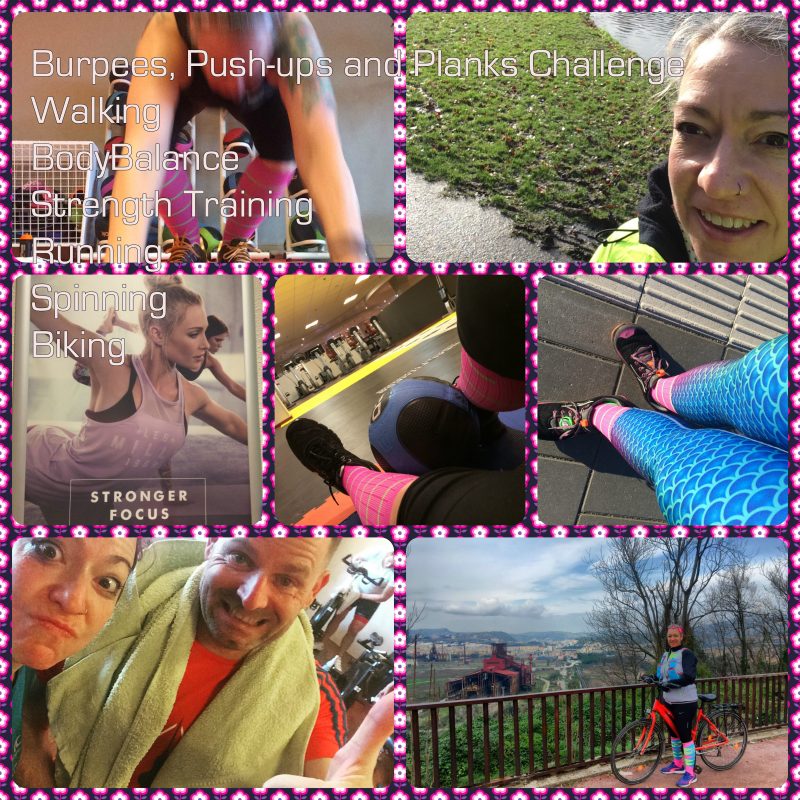 A lot Accomplished, A lot more work to do.

No Junk At Work:  I was in the office 17 days this month and only 2 days I had an argument with cookies and lost.

And I wanted to just touch on that subject for a moment, since there were a few (positive I may add) comments from my last blog post.   I bring my lunch and snacks with me to work every day.  And trust me when I say, I bring loads of food.  I do not, pretty much ever, go to a vending machine to buy junk.  Every once in a while I have gone to the brasserie on the ground floor and I have bought something, but even that was several months ago.  I don’t even buy coffee anymore because I can get free coffee on our floor (which is awful by the way, but so is the stuff downstairs if I just order a black coffee) and I’m not drinking cow’s milk anymore so no cappuccinos.   The challenge at work is all the crap that people bring in.  There are at least 60 people on my floor so that’s a lot of birthdays that people are celebrating with cake (it’s tradition here – for your birthday you bring and treat everyone with cake).  Then depending on the time of year, there’s always some sort of candy or chocolate around.  I know that in times of stress I tend to go directly to this junk to solve whatever issue I’m having.  Which we all know… doesn’t really work.  So, it’s not because I don’t have food with me.  I do!  I never am without food at work.  I will continue this as a goal, basically until it becomes a habit.  Like not drinking pop –  I just don’t drink it anymore unless I’m out and I don’t want alcohol but still want something besides water.    I don’t use alcohol to solve my problems anymore and I don’t use cigarettes to solve my problems anymore, so I would really really REALLY like to stop using food to solve my problems as well.

Logging my food:  Still hit or miss but I have been making more of an effort to prepare the right type and right amount of food based on what I think I need during the day.  And the key phrase here is “based on what I think I need”, because to be perfectly honest I just still don’t know how much or what I need as far as macros go.  Now that I’m training again, I will probably fiddle around with this more in the coming weeks.  Biggest food challenge (besides NJAW) is not eating enough on massage evenings since I have to go straight from my office job to my massage job.

And as you know we had a nice weekend away in Naples, which was probably the most fun of January.  I feel like I’m way too busy and I don’t have enough time to do everything.  Job #1 is super busy, Job #2 I still want to hold on to as long as I can (not for the money but for the experience), running and working out are priorities, so yeah my house is a real tip and pretty much I am only getting the basics done.  My To Do list is not getting crossed off.  This is something I really want to improve so something is going to have to give.  But how to figure that out?  I don’t know yet.

I weighed in again on the 31st but to be perfectly honest, I don’t trust my scale as far as I can throw it.  And… the cleaning lady at work asked me today if I had lost weight so I’m going with that kind of feedback instead :)

If I were to give my month a grade, it would probably be a B.  I did a lot, I’m proud that I completed the challenge, most of the month I ate well and I was able to stay strong for the most part around sweets at work.

February has begun and I seriously  hope I can manage my time and all of the stuff going on.  Training has started again and that’s a priority. I’m so glad I have a race to look forward to;  I’m just not glad there are only 24 hours in a day.

How was your month?  If you were to give it a grade, what would it be?