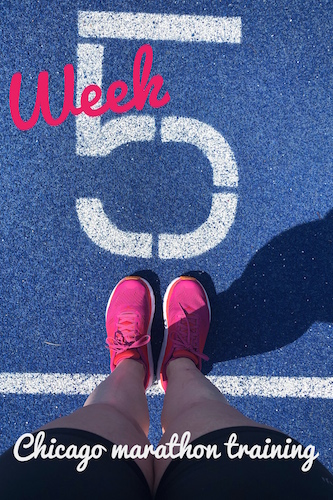 This week was much better as far as work goes, but it was finally “our” turn to experience the Heatwave from Hell. Training continued, sleep remained difficult, at some point the airco at work didn’t even work properly anymore (and it’s normally freezing in the office). We had two days that were the “hottest in the history of the Netherlands” – 38 degrees for us on Wednesday and 41 on Thursday (that’s 100 and 104 I believe in fahrenheit). We suffered and yet made it through. It’s FINALLY cooled off a bit. Let’s all do a rain dance now and hope for wet and cool the next week (really! now we need some rain!).

The Plan vs. Actual was a bit closer to each other this week:

On Monday I had to go back to the podiatrist with my new Hokas and we decided that I would try them with my old insoles for 3 weeks to see how it goes. The new insoles are made to fit Altras so they are too wide in the toes area, the old insoles were made to fit in my Nike Vomeros and they actually fit perfectly in the Hokas. I biked 9 hilly kilometers for 5 min of discussion, but in the end it was worth it (I guess, haha!). I was glad she made time for me on such short notice.

Tuesday -I did do a small lunch walk round around the grounds and parking lot; I did not record it but it was probably 2 or 2.5KM. It was blazing but i just wanted to get some fresh air.

Ron and I went over to the business park area not too far from here to do intervals after work. It was tough since it was around 37 degrees (98.6 F) but having Ron pace me was absolutely amazing. In the end I needed a bit more recovery so my rest was the first two rounds 200m and the last 3 rounds 300m. When we were done he went off and did his hill sprints at the Hert – maybe you’ve seen me posting photos of a large deer on top of a hill before? It’s a real b*tch of a climb is all I can tell you. He did 5 x 100m – that’s not quite all the way to the deer itself.

Wednesday – I slept horribly Tuesday night and when I got up in the middle of the night to go to the toilet my legs were like concrete columns. I had all my stuff ready to go for a run Wednesday morning and once again it was a NO GO. Ugh. I do actually have good intentions. In any case, I went after work with Ron – first to Sonsbeek Park and then over to the gym. I was going to do some strength exercises but my “easy” jog ended up being challenging from taking the wrong road back up to the gym, which turned out to be what felt like one continuous uphill road. Gym was just 20 min cardio cool down, waiting for Ron to come back.

Thursday – I was so happy to get back to Bodypump and Sprint but I *knew* once again it was going to be challenging. Ron got home a bit early from work so we went to the gym with about 15 min to get changed and get to class – he was off for a run and then would come back later with the intention to do some strength work. It was THE hottest day and there was hardly anyone at the gym! About a handful of us badasses were in class – the temp in the room was 32 degrees (90F) even though the airco was on! I don’t think I’ve ever sweat that much in class! After a 15 min break we were on again in RPM Sprint and Vincent was there to join me. It was cooler in the bike room but as it’s a pretty intensive class there was still a puddle beneath me. As hot as it was I felt really good to have both classes done!

Friday was my day off and also a rest day… but I spent the day cleaning the house. It was a necessary (and not even fully done *sigh*) chore. Would not be a coincidence either that we had Vincent and Wendy over for dinner before they are off on holiday.

The poor cats and this heat – they are really dramatic!

Saturday – track day! I was looking forward to this all week really – I love running out at the Olympic Training Centre – it’s been absolute ages! We did get up too late and get started too late though, so we didn’t manage to get to the gym, due to Ron having an appointment in town to get his hair cut (we just ran out of time). My assignment today was 6 x 800 / 200 rest at threshold pace and I actually went too FAST except for the 5th set. It was a bit cooler but we were more than prepared with lots of water (and slathered in sunscreen). Totally happy with today’s workout.

I went with Ron to his appointment, since that’s where I got my hair done 2 weeks ago and a couple of the hairdressers were surprised to see me and see that my hair has already faded! So they made a new appointment for me for next Friday to get it redone. Everyone agreed that my hair color should fade but not that fast!

Sunday – Long Run Day! When I initially read my training schedule, I thought that 1:30 hour would be 14KM. Since I haven’t exactly been running 6:30 per kilometer, I decided I might be a bit more honest with myself and I calculated it again at 7:00 per KM, ending up with 13KM instead. I had also already decided that I was going to run the first 7KM without stopping. Instead of being so hard on myself about my endurance, I’m chopping up my training a bit instead. Last week I was able to do 6KM in one go so I have had it in my head all week that I was going for 7KM next. And while I was running I just kept repeating to myself “I am strong today. This is a perfect pace” and I had my Garmin just on the time and not on my actual training. Sometimes it’s just better for me to not know my pace or how many more meters or km’s to go. And I did feel strong! My first 7KM I did in 48 min. Then I took a short break to drink something and have a gel and then we started up again. After that I ran to 10KM, walked 500 m as a bit of a break and then ran again for 2.5KM. This was by far the strongest long run of my Chicago marathon training.

So, hotter than Hades or not, I’d say this was a successful week!

Ugh. I knew this week was kind of a cutback week – I can’t believe I need to do 21 km already on Sunday!!

How was your week? Did you race? Are you preparing for a big race? Do you have furry kids that are basically winning Oscar Awards for best dramatic role in a season? Do you love or hate track intervals?