Even the Blog has Jetlag

I did not mean to take so long to update!

As you (may or may not) know, last week I returned from visiting my family in Albuquerque. It was a good visit but also a little bit heartbreaking. That sounds dramatic, but let me tell you why.

My grandmother – she’s very old, she’s in a home and she’s suffering from Alzheimers. She knew who I was (but not at first – she didn’t recognize me without my glasses, but I haven’t worn glasses since I was 13!), but nothing really stays with her for a long time so the conversation was really a 10 time repeat of the same questions. The part that is heartbreaking is that she just doesn’t know where she is or how she got there (even though we tell her) and she just wants to go home. She was very independent up until a little over a year ago but it seems her mental health is going steadily downhill. It’s heartbreaking that of everyone, only my father is there for her, even though other family is near and could go to see her. I’m not saying they have to see her. The thing is, when we have problems or quarrels with family, at the point where a person doesn’t know what is going on, why not just let go? When are we ever going to learn that life is very short and if you get a chance to let go of a grudge that is not adding any value in your life, why not do that. The look on my grandmother’s face when we were there was absolutely priceless. It made her day (even though she wouldn’t remember later). She was smiling, truly happy, and remembering bits and pieces and that made her feel good. When we left she almost started to panic and I thought she would cry. It was awful. If I were there I would see her every day. She doesn’t have much more time on this earth. In fact I have no idea if I ever will see her again.

My long-time friend T – she’s my age, we’ve been friends since we were 10 or 11. She’s one of those friends that even if you don’t talk to each other for a while you always pick right back up. I think last year when I was there we were saying that for our 45th birthday (we are I think less than a week apart) we would do a marathon together. Well, she has cancer. While I was there she had surgery and we’ll find out soon what next steps will be. She’s doing her best to stay positive and I know I should as well, but I have a sick feeling in my stomach when I think about it. I’ve mentioned before about my good friend Michael who died 4 years ago; this had a huge impact on me and makes me really think hard about our mortality and how important relationships and friendships are to maintain. I didn’t get to see T, it was just not a good time what with surgery and family staying with her (and I didn’t want to impose – I’m sure it was NOT an easy week for her!), but if you could keep her in your thoughts or your prayers if you do that sort of thing, that would be awesome because I think she has many more years to enjoy in her life.

Then there was my Aunt – she hasn’t been well and on Wednesday she had the right mind to go to emergency where she basically was immediately hospitalized for almost being in a diabetic coma. I did not get to see her but again, this makes me think about how maybe I need to reassess how I handle and maintain my relationships with my family.

To summarize, I need to get my arse home again soon. I feel more and more homesick anyway, but this is getting ridiculous. I don’t know yet how or when I can make this more permanent (it will take at least a couple of years; it’s complicated!) but we really need to start thinking about how to make it work. In the meantime, I will focus on getting back possibly for Thanksgiving, maybe the health level will be up by then.

It wasn’t all gloom and doom! I got to hang out with both of my parental units, and I got to see some other good friends up in Santa Fe! Last summer I saw them with T and her husband and this time my friend S came down from Los Alamos. It was too short, again, so I’ll have to spend a wee bit more time next time!

On the Health and Fitness front:
Dad got me a week’s pass at his gym so I went a couple of times with him. In hindsight it was the BEST IDEA EVER to continue training because last week, after I returned, I had the WORST jetlag so far (you’d think I’d be more used to it by now). I did three runs (2 outside) and one strength training session at the gym. 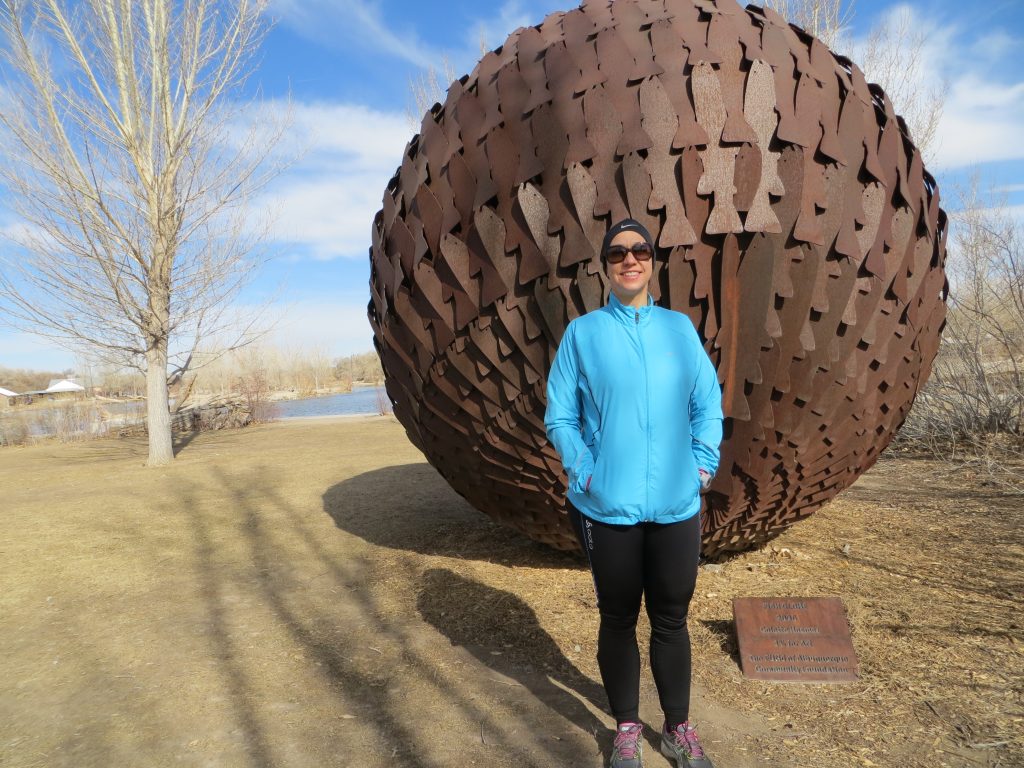 At least there was a blue sky.

Run one was down at Tingley Beach (the name is hilarious – knowing that we are in New Mexico and there is no ocean), suggested by Debra from Miles To Run. It was cold and very wintry looking (ie dead trees. A LOT of dead trees). Hubs wasn’t feeling up to running so he decided to just hang out in the park and read while I was off for an hour. I have to admit it was very uninspiring. I had no music with me (I’m about 50/50 with music now and if I’m not familiar with the area, I’ll just pass on the tunes). And get this… about 3 or 4 KM into the run there were two dogs not on leashes just running around and one came at me and tried to bite me! Seriously what is it with dogs not on a lead!?? I’m pretty nervous about dogs since the crash in Cornwall but this was just a tiny dog who thought he was a big dog and he didn’t break the skin when he bit me. There was a cyclist on the side of the road and she was apparently trying to call animal control – they weren’t her dogs and no owner could be found! 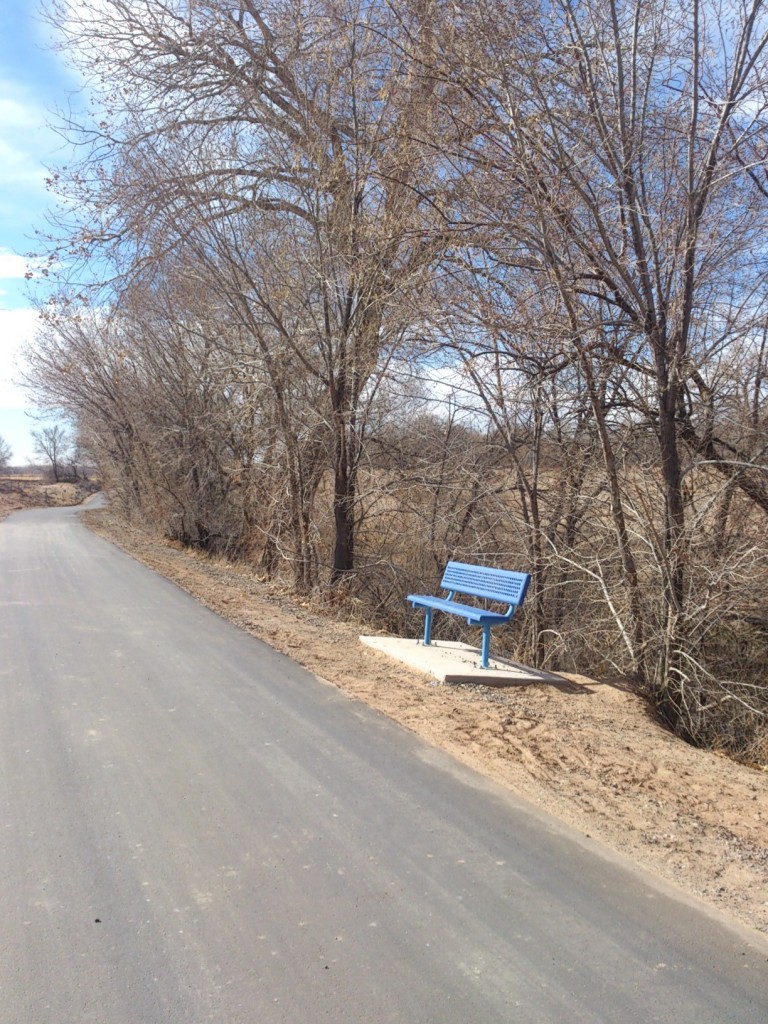 why would anyone want to sit here? 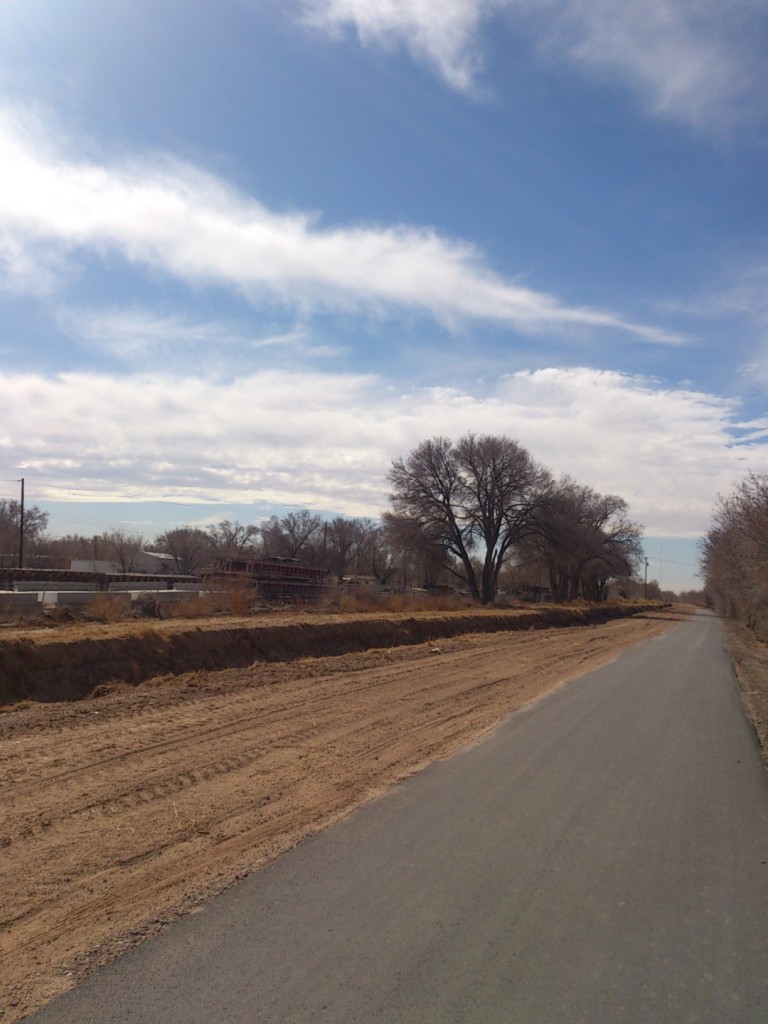 the sad road to nowhere 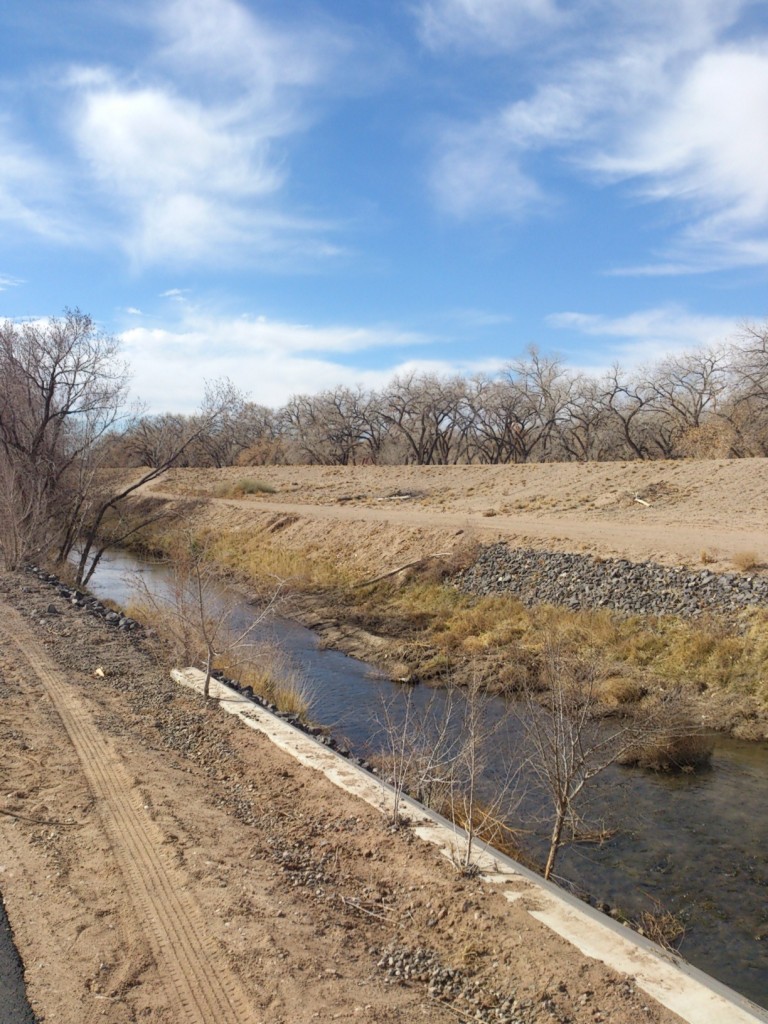 really, this was not inspiring.

Run two was on the treadmill at the gym. I think it was around 5.5K total running with 30 min in D2, 3 min in D3 and 7 min cooldown. (should have been 10, but I needed to be sure I was on time for when dad needed to leave.

Run three was a real challenge. I was suppose to do fartleks but wow is this hard anyway, let alone at a high elevation. I did what I could but it was not totally to the training schedule. Was supposed to 10 min D1 3 times with 2 min fartlek in between. There was quite some walking involved in this run.

So that was the Week 5 update!

Week 6 was not at all what I had planned. Jet lag was a killer and I managed exactly one run on Thursday of 6KM. It was a good run though, much faster than my normal D1 (it was supposed to be 40min at D1) and I managed it in 37 minutes. I was kind of surprised that it went so well when I felt so exhausted.

It’s March 3rd and that means it’s just over one month to Berlin. Kind of freaking out! Tomorrow we are announcing to everyone at work that I’ll be running for charity and that will pretty much seal the deal. Of course I’m going to do it anyway, but once I announce to all that I’m doing it for a specific reason there’s really no turning back. I guess I also better arrange my travel to Berlin as well. On top of all of this, I still have Rwanda to think about and I need to get my shots ASAP. I think I’ll be doing that Wednesday. Keep your fingers crossed that I don’t get too ill from the shots!

Do you work out when you are on holiday or do you take a break from your training?