So far so good. The first day was actually odd since my foot still felt a bit numb, slightly tingly. The 2nd day was when the pain kicked in but all in all it wasn’t that bad. I spent quite a few days on the couch doing nothing but binge watching Netflix (Making a Murderer and for a total switch New Girl), mixed in with some homework and some online coursework for my First Aid course I’m doing in a couple weeks. The third full day after the operation was a national holiday in the Netherlands so at least the hubs was home keeping me company (when he wasn’t running). 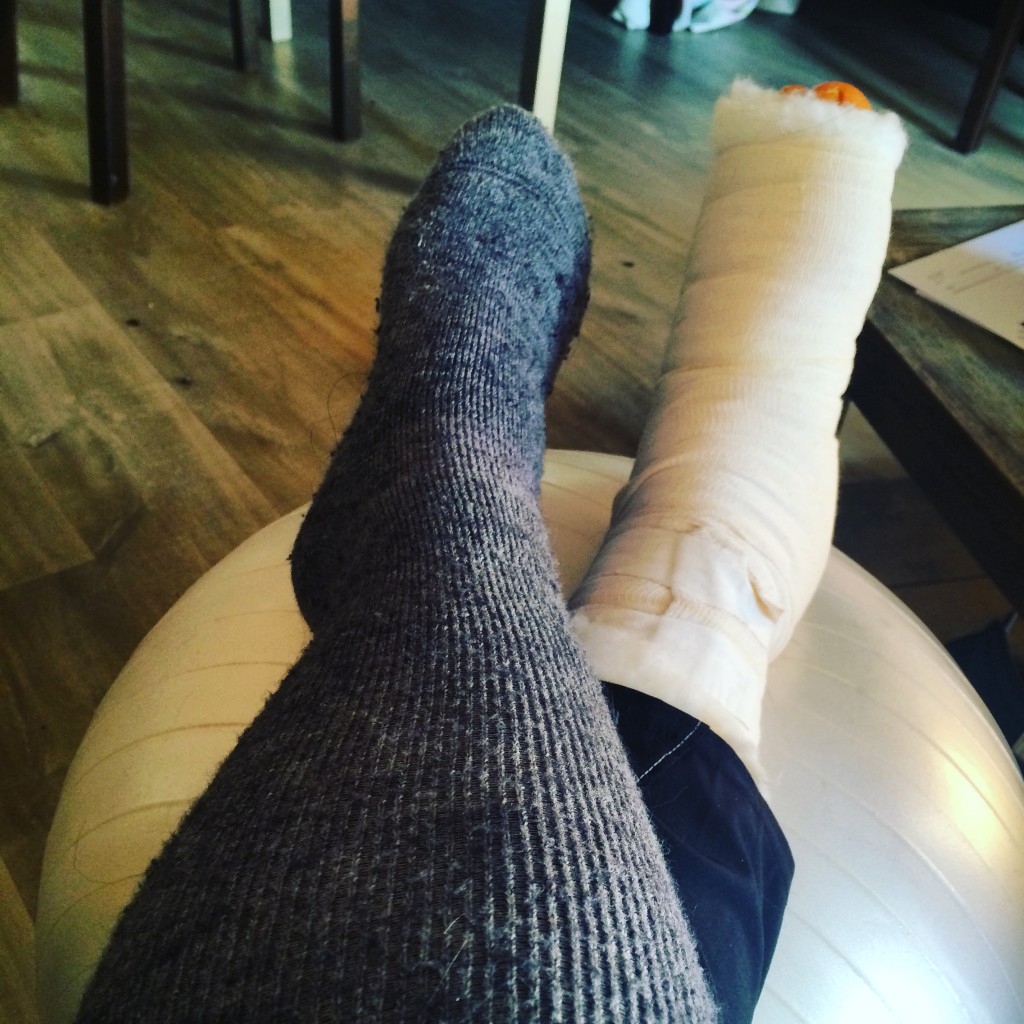 Foot had to stay wrapped for 2 full days.

The Giro D’italia actually STARTED in Gelderland this year, first day in Apeldoorn (about 50KM from here) and the 2nd and 3rd days in Arnhem! YES!! My city went PINK! Sadly I could not get out to watch the cyclists speed past places very nearby my house, places I run and bike, but the hubs was so sweet and bought me a Giro D’italia shirt and accessories so I would feel a bit like I participated as a cheerer! FYI: A Dutch guy is LEADING the race in the Pink Jersey!! YES!! DUTCH PRIDE!!!! 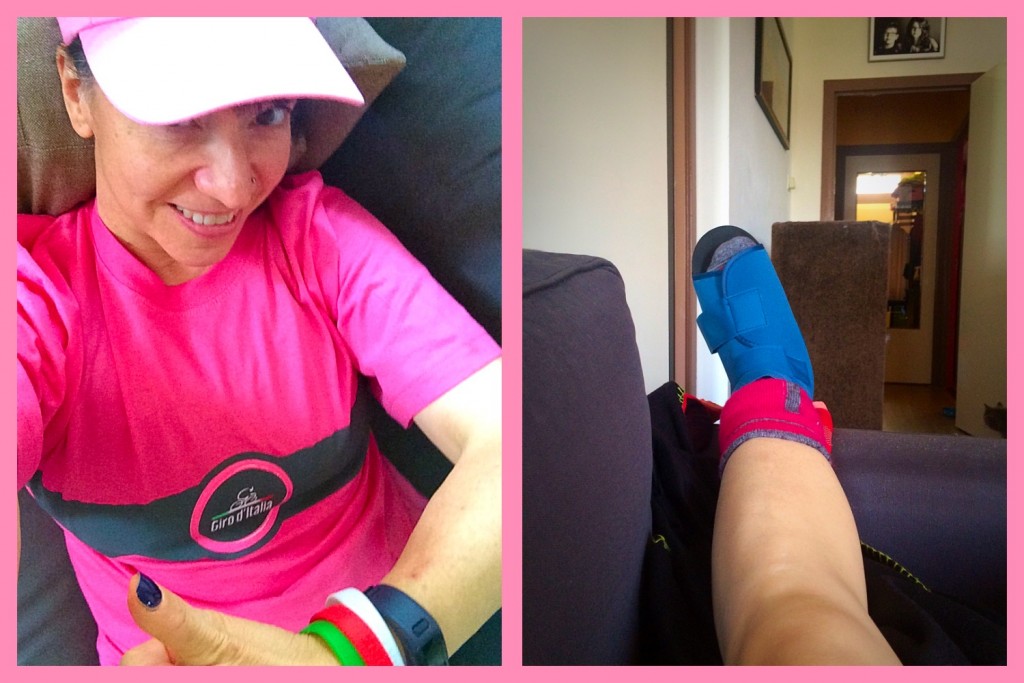 supporting from the couch!

Day 6 post-op was Mother’s Day. I noticed that out of 4 stitches, the 2nd ones broke open. This concerned me a little. I phone the weekend health services and asked if there was anything to worry about. They advised me to keep an eye on it and if no pain and weird goo (ok, “goo” is my word, not theirs) coming out, there was probably no reason to worry. I made sure to change the bandage and occasionally had a look to see that it was ok while we were out and about – we dropped by my mother-in-laws for Mother’s Day of course and then the four of us Little Fonzies went out for Dutch Pancakes for dinner before we dropped the kids off at their mom’s.

Monday I decided to stay home one more day, called the doctor in the morning and went in to see if indeed everything was ok. I was assured it was no issue. We went and picked up crutches as well even though I didn’t want to use them this time (really messed up my back last time with crutches). I realised that I may need the help getting through the building at work to get to my office (it’s a long walk!). 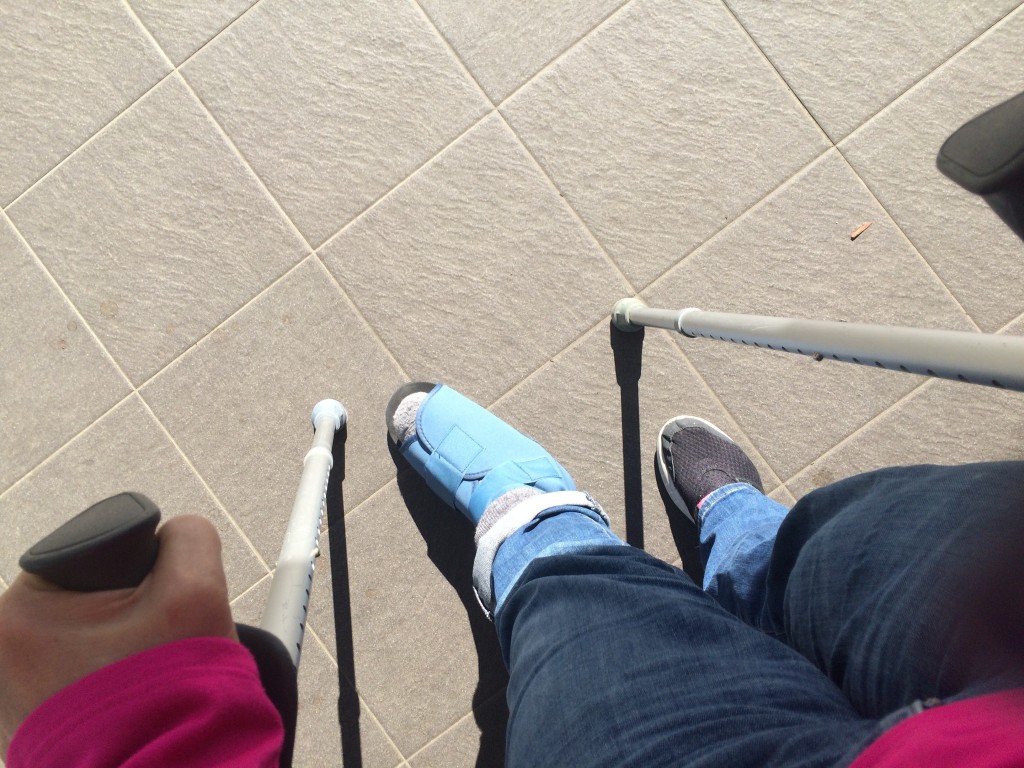 Tuesday (day 8) I went back to work. Realised what a huge difference 7 years makes when there is weight loss and improved fitness level involved with regards to crutches. I’m like a speed demon on those things! Ha! OK not really, since that would be dangerous for a clutz like me, but it’s much better this time around.

I have the nicest colleagues – everyone was kind with the occasional joke thrown in – and one of my colleagues picked me up in the morning on Weds – Friday. Hubs was able to come and get me after work. The weather has been super nice so that’s been a bummer not being able to really just go on the bike or go for a walk, but it will happen soon. I used the crutches Weds and Thurs but the walking is improving so Friday I went without. I even tried shoes again after work Friday! Progress!! 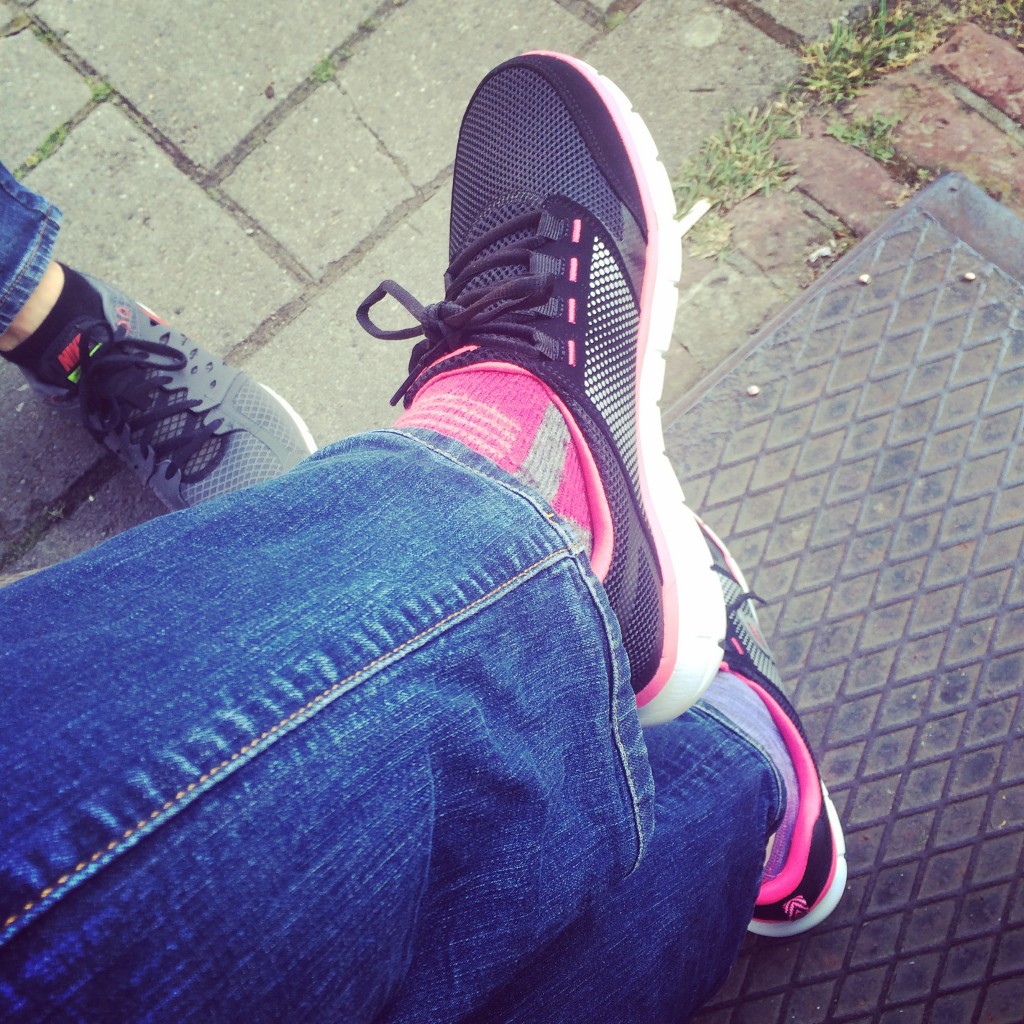 trying these shoes out for a bit more comfort.

School – finished my internship report, started my First Aid Course, got certified at school in CPR. Still to do: client cases. Also probably need to contact NGS to see when the H E double Hockey Sticks my exam is going to take place. 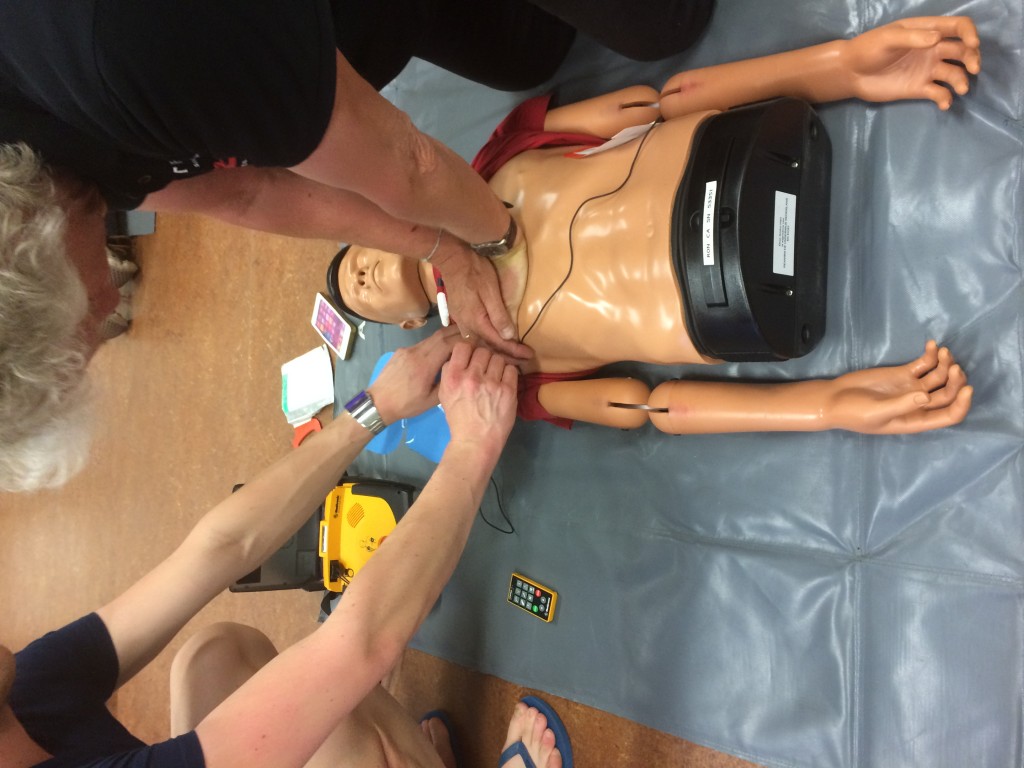 refreshing my CPR knowledge after 30 years… 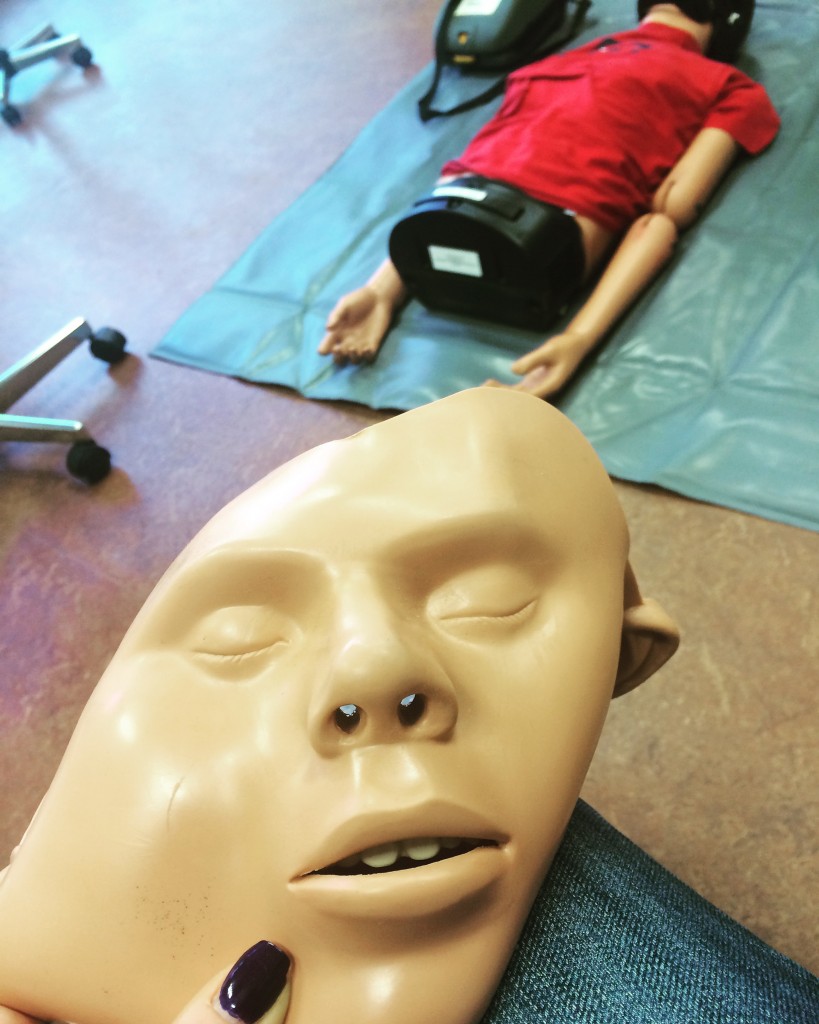 we all got our own creepy face to resuscitate.

Liverpool Rock ‘n’ Roll Marathon weekend – it’s ON but I’m not running. The hubs is running and my friends Rob and Adi (who ran with us last year) will be there too. And other friends too of course (like Joni!)! I was able to volunteer for 5K Medals on Saturday and Marathon medals on Sunday!! So YAY! I’m still participating in a way!!!

Berlin Marathon Training – starts as soon as I can run again. Stitches come out on Tuesday (there are now only two left!) and I see the Ortho on June 6th.

With that I’m off to do more of my First Aid course. Need to get that out of the way!!