Week 17 recap is here;  I’m not certain it was seen and it’s not important that it’s read, but just in case. (Mainly running woes, getting a tinnitus masker/hearing aid, feeling a bit crappy, then having a good run despite falling after only 1 mile.  Oh and pizza.  Yummmm).

This week my intention was to really FOCUS again and plan out my week without making myself nuts or cutting my time too short for myself.  Self-care is everything right?

First, let me tell you about May Goals.  I have only a few and they should be reasonably easy to achieve:

So this was the plan for the week:

Let’s see how it all worked out:

Monday – I prepped all my food Sunday night and got my clothes and workout items ready.  And though I still found it was early enough to be grumpy about it, I did get up and do my morning workout! Whoo hoo!   I did however not run in the evening.  Instead I prepped food for the next day as it was going to be another early start and a long day. 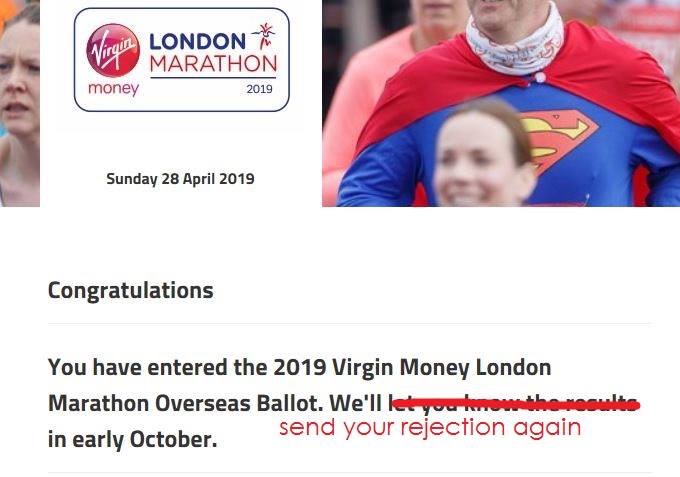 Oh yeah. Today was the day to sign up for the London Marathon.

Tuesday – up early again as I needed to be at work by 7:45 (end of month).  It’s May 1st and that means it’s the start of Running Around The World again at work.  Each year hundreds (thousands?) of colleagues participate in this challenge to not only get more fit but we plant trees for so many thousands of steps made.  It’s a great initiative and I enjoy participating.  So this month I’m tracking ALL activity! biking, steps, cardio, everything!

I had massage clients in the evening and finished pretty late.  Then I had to do a coffee beans run and go to the supermarket to get food for the next days to prep. 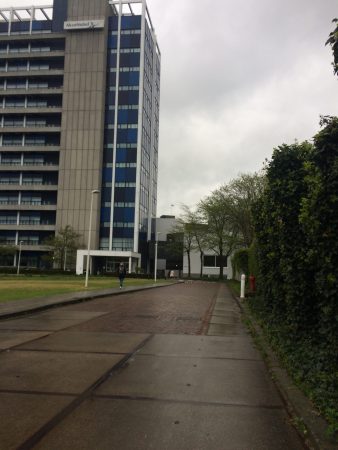 the weather is not so promising. 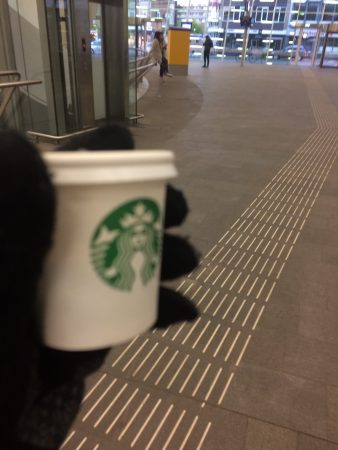 yes, I’m still wearing gloves at this stage (to be fair it’s also to protect the wound on my hand a bit)

Wednesday – dry needling in the morning so another early start.  She did my gluteus medius and then hit up my peroneal muscles and around the ankle to try to alleviate the pain/ pressure in my toe.  It wasn’t pleasant but hardly as painful as last week.

In the evening I finally made it back to RPM with Vincent!  I was a tad nervous for the new release but it was fine.  Only not my favorite instructor but you can’t have everything, right? 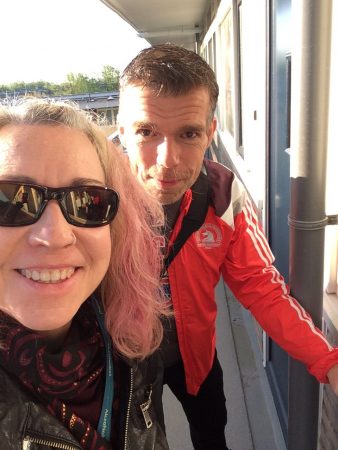 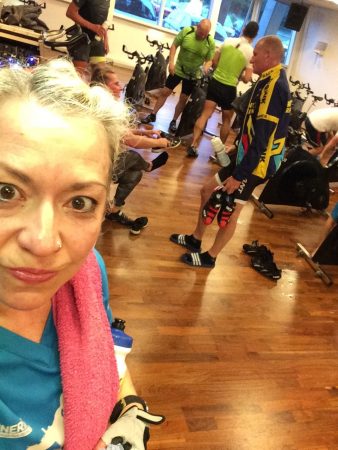 yeah! good to be back at spinning!

Thursday – well, guess what?  another early start and off to the Osteopath.  This was my first of a planned 4 sessions.  He seems to think that the issue is really coming from my back since I already have issues with L5 – S1.  He worked on my foot for a bit as he said it was really, really stiff, like range of motion was really limited (I don’t feel it really myself since I’m so used to it) and then he did a lot of stretching of my left leg (think acrobatics leg-over-head action, that’s what it felt like anyway) and a lot of manipulation on both sides of my psoas (think heavy pressing on your intestine).

Afterwards I went to work, had a fairly busy day but still made it out for a walk at lunch.

Once I was home I put on my running clothes and attempted a run in my new Altras.  Third time now trying – these are unfortunately NOT the shoes for me.  Ron found the same Torin 1.5’s that I have now on ebay and ordered them for me.  Problem solved. 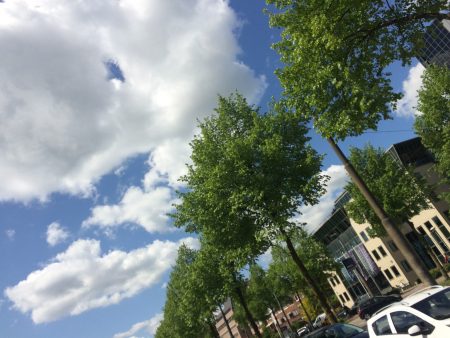 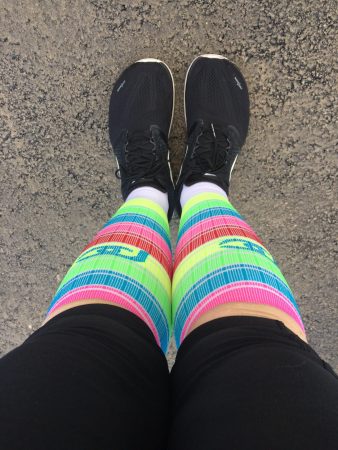 my new running shoes are now my new everyday shoes…

Friday – AM workout planned and DONE!  So that’s 2 for 2 this week.  Not bad.  I had clients in the afternoon.  It was a gorgeous day out so on my biking back home I took the long way home along the Rhine.  So beautiful.  I love spring! 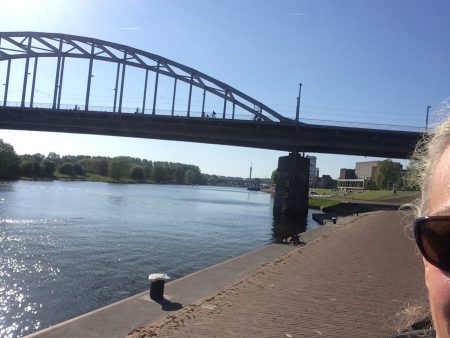 At the John Frost Bridge (aka The Bridge Too Far)

Saturday – No RPM this morning.  It’s Liberation Day in the Netherlands and on holidays at the gym you have to sign up for classes since they are not open the whole day.  I was too late with signing up and Vincent had to work so I opted to go for a run instead.  It was SO gorgeous out!  I didn’t really have much of a plan, no real km’s in mind (now that I’m not *really* training I’m just running when I can and going a bit willy nilly), but we were already planning on running Sunday so I didn’t want to overdo it, especially after dry needling and the osteopath visits.  I pretty much headed out when I normally would go to the gym, because I had plans for the afternoon!

I headed out towards the Rhine again with Central Station in mind as a destination.  I was feeling good though so by the time I had a choice to turn right and end the run around 5.5KM I decided to go left instead, a little bit up the hill, then over towards GCE (where I do sport massage) and then down the hill again to the station for a perfect 7KM.  It was just enough.  I had time enough to stop in at Starbucks, get an ice cold Cold Brew and jump on the bus home. 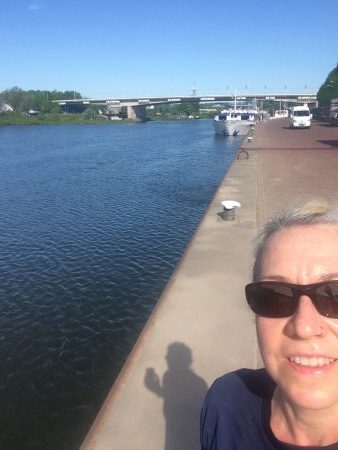 I do love a good run on a sunny morning!

I ate something, showered and got dressed and then headed into town again.  I was meeting up with my friend M-J.  She recently was voted into local government in the party that I support and she had mentioned to her friends that if she did get voted in, she would show here appreciation by visiting the glass balcony at the Eusebius Church (even though she is deathly afraid of heights).  She asked me some time ago if I wanted to go with her as support and I’ve not been (the balcony is pretty recent but I’ve never been up in the church in all the time that I’ve lived here!) so I figured why not!

The view was absolutely incredible, but the balcony was a bit nerve wracking.  Even though I was up in the Sears Tower back in October in Chicago, it still makes my stomach flip a abit!   It took her awhile before she could step on the glass floor but she finally did it.  Afterwards we enjoyed the sun a bit and had a drink and then I went home to hang out with my two boys (my stepson came over while I was away). 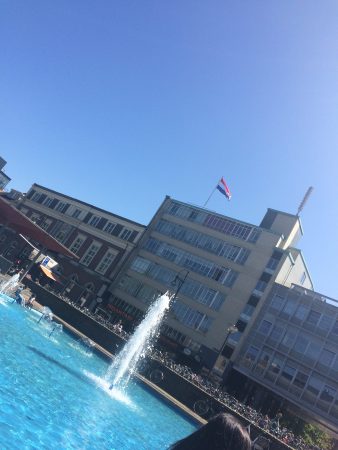 view from the terrace 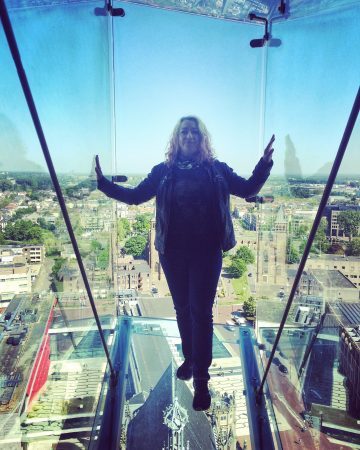 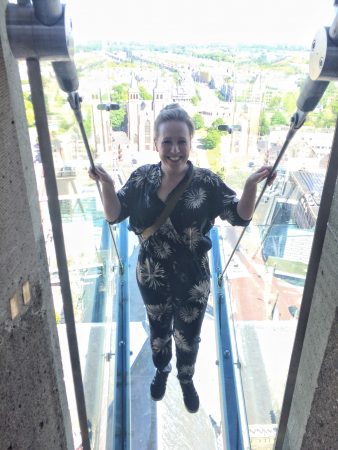 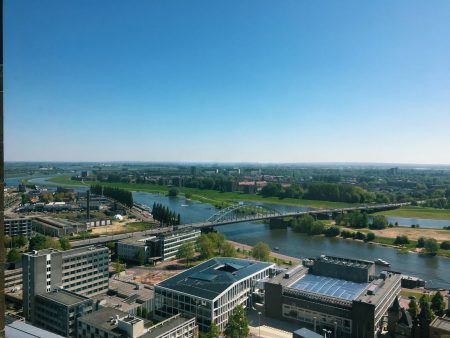 The John Frost Bridge from the top of the Eusebius Church

Sunday  – The 7th Edition of the Cheesecake Run was on the plans for today!  I believe it’s every quarter that my running group does a Half Marathon distance Cheesecake Run, that is to say, from Starbucks Arnhem to Starbucks Nijmegen OR the other way around.  It was perfect weather for it and, although neither Ron nor I wanted to run that full distance, we wanted to see our running friends anyway.  So the plan was,  we would bike/run to the station and then he would run the first half of the run with the group and we would switch at the train station in Elst.  And that’s exactly what happened.  I ended up running in between two groups (there were 3 in total) which in the end was fine.  The second group was too fast for me and the 3rd group was taking it easy.  Normally I would be fine with this but I wanted to give myself a bit of a push to just do the 10KM with little or no stopping. 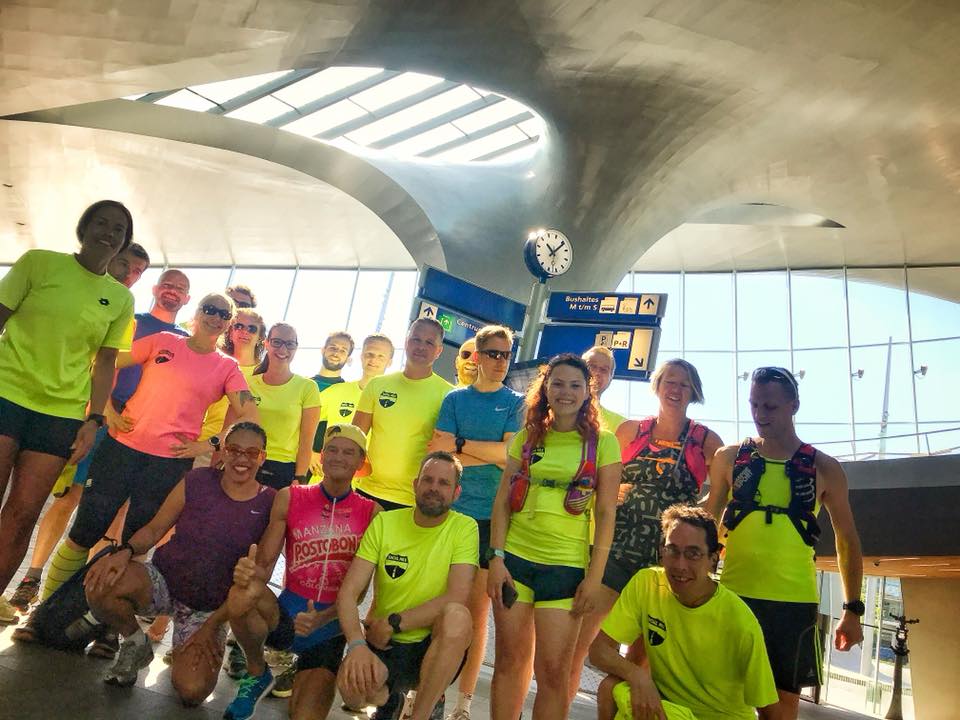 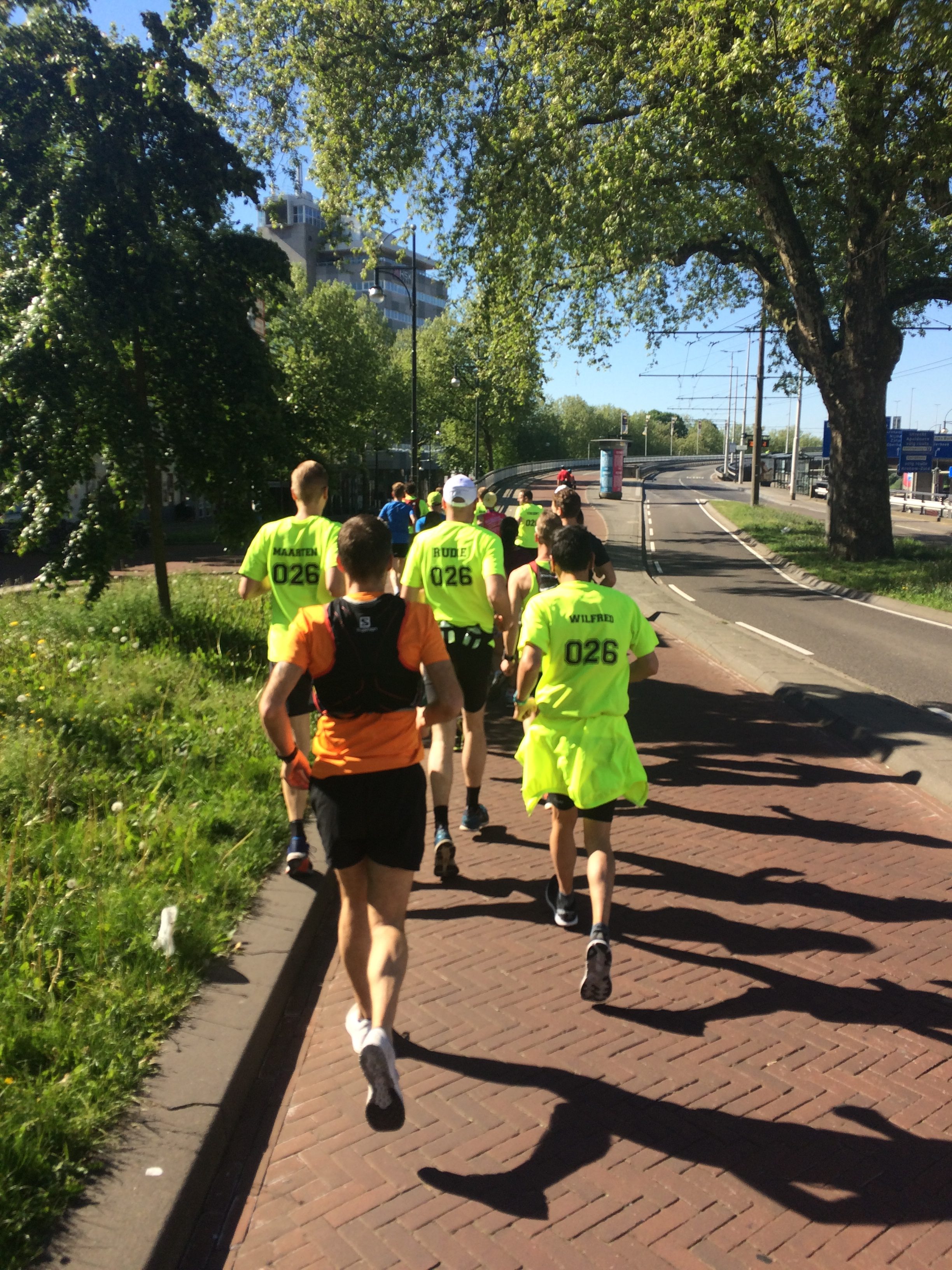 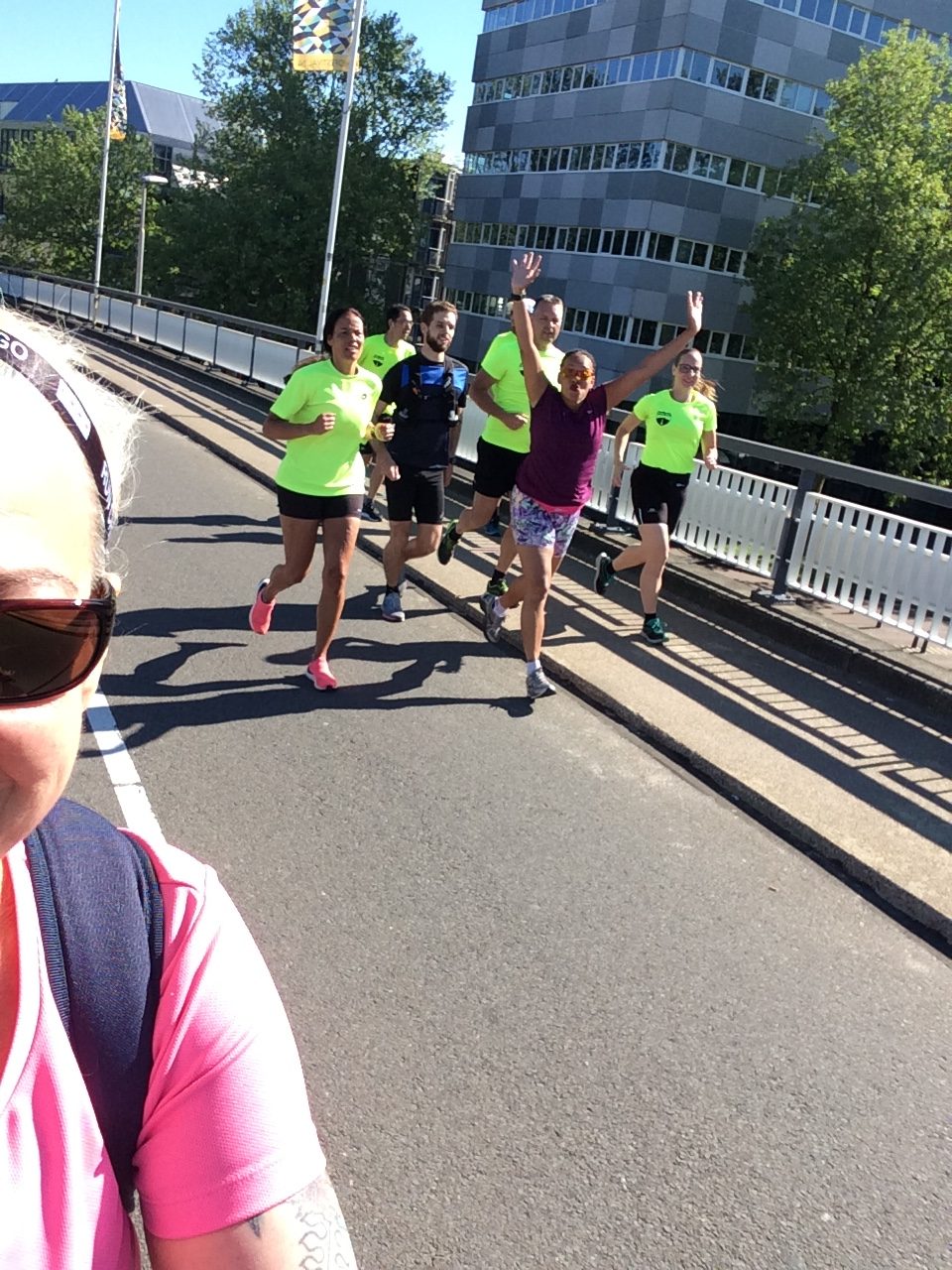 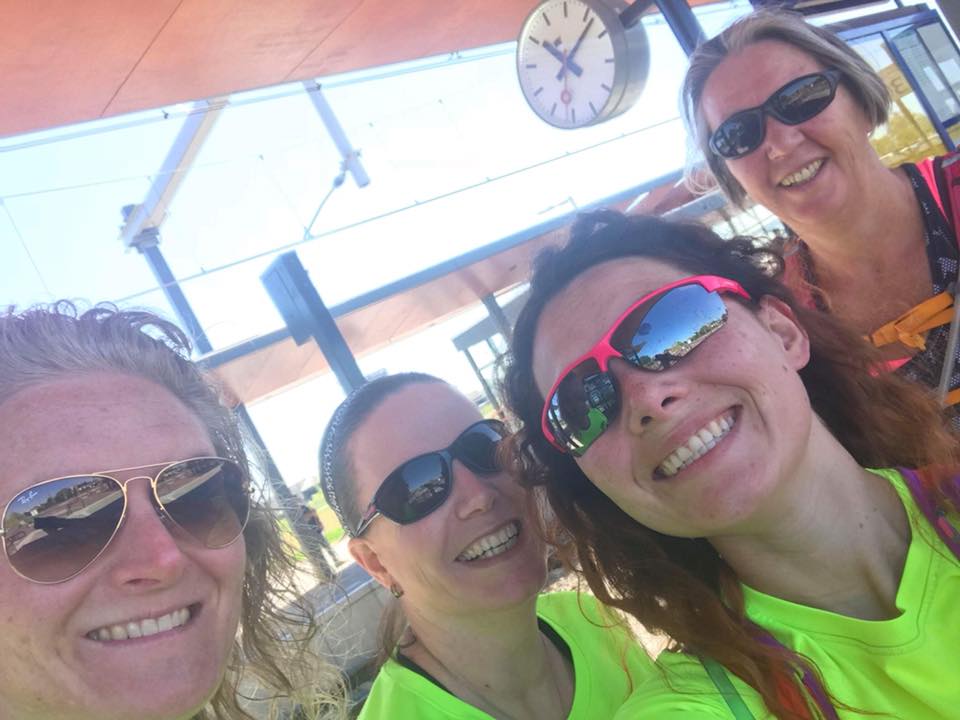 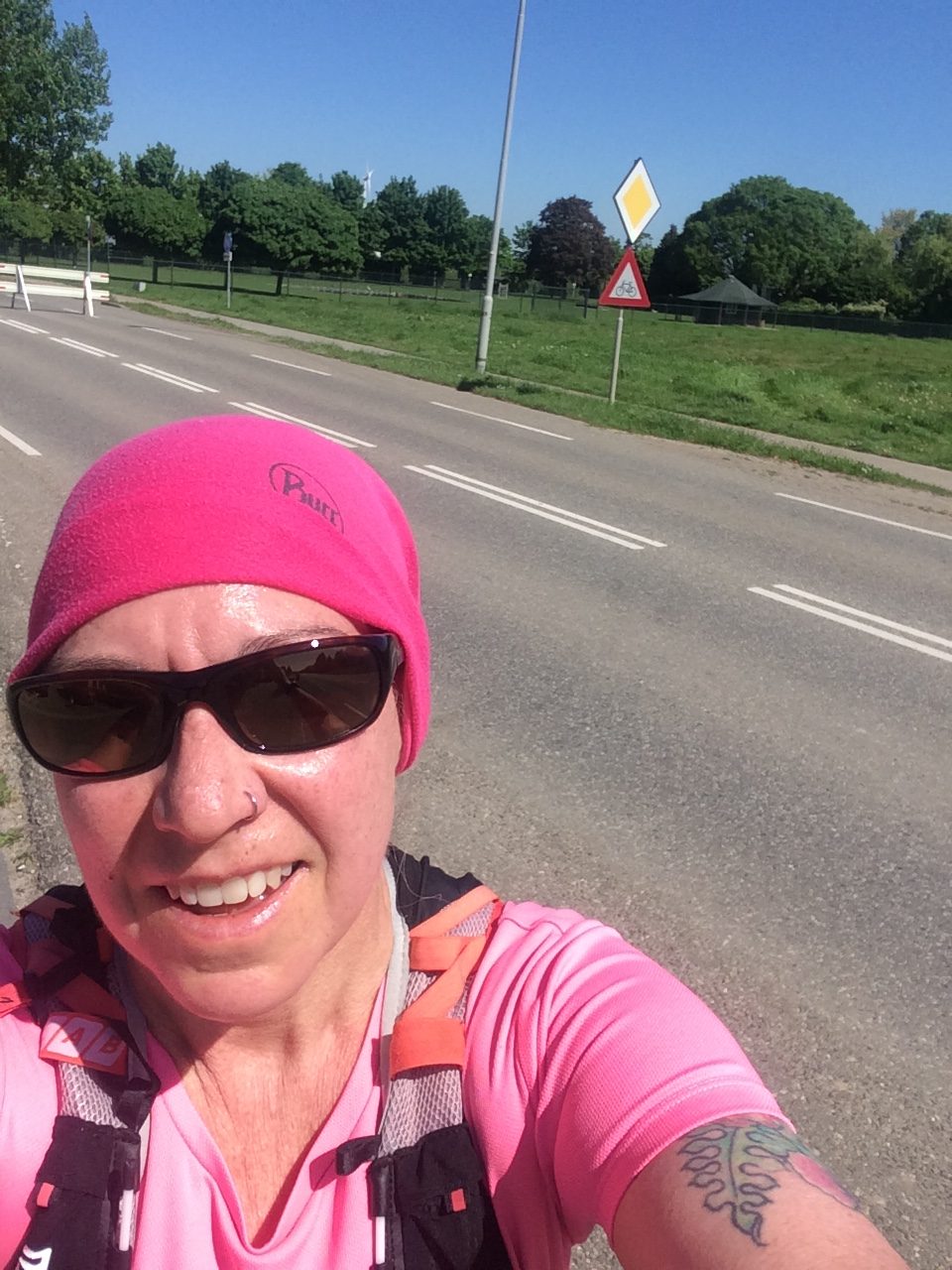 Of course once we arrived at Starbucks we ate all the cheesecake they had in the shop haha!  (side note:  I did not have cheesecake as I fancied their yogurt cup with nuts and fruit instead).

It was too gorgeous to take the train home, so I cycled home with my friend K.  Such a fabulous morning and afternoon!

Once I arrived home I had a little bit to eat, showered and got ready to go out (again) so that Ron, The Boy, and I could go out to dinner. 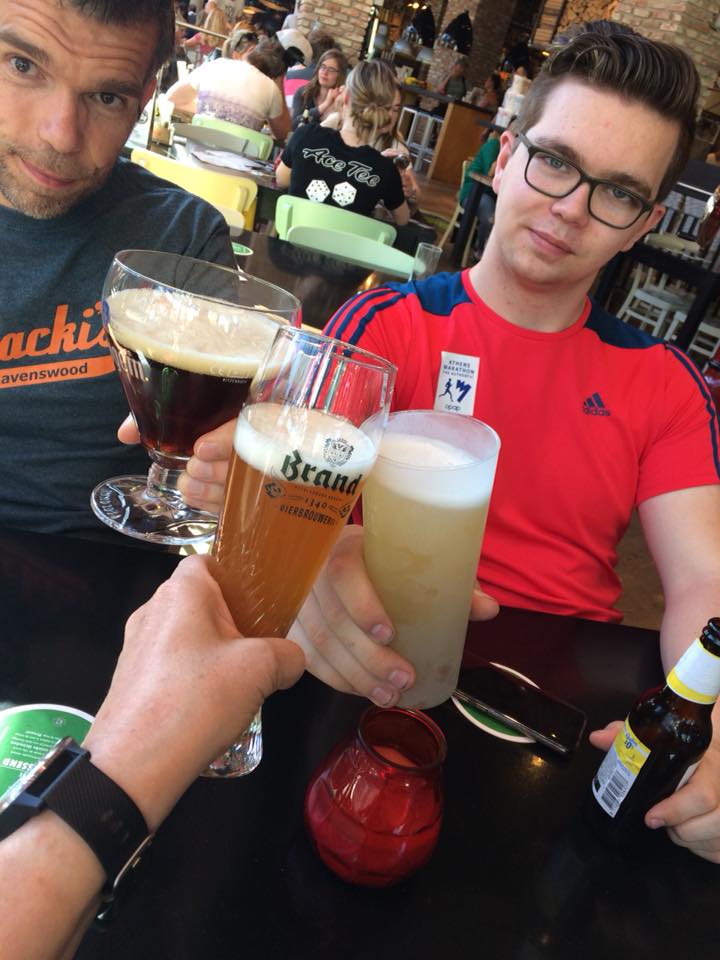 It was one of those weekends that you just didn’t want to end!

So even though I was busy and there were quite some early starts I still had a good week.  I have to admit my food was basically shit the first few days, I have been stressed about making certain decisions and also over my foot (and not sleeping well just makes for a short fuse).  I’m never going to lie or pretend that I’m not an emo-eater;  I definitely am and I’m definitely trying to stop these situations sooner rather than later.

How was your week?  Have you ever had such a perfect weekend – weather, sport, friends, family-wise – that you just didn’t want to end?

Do you work out at home?

Are you also having amazing weather these days?