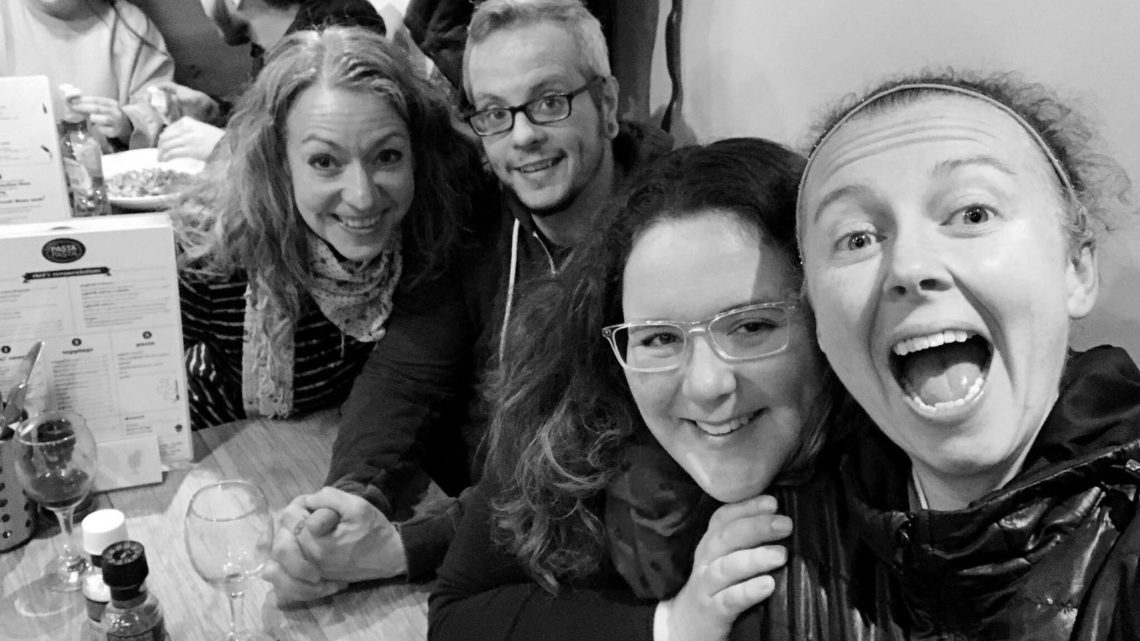 As you know or may have noticed, I missed the Weekly Run Down last week because I was in the process of moving my blog to a new host as well as updating the name of the url. So I’ll try to keep this short and sweet, which shouldn’t be too hard considering week 13 there was literally nothing going on…

So week 12 actually went to plan, except I did make the decision to let go of the 10KM PR and take care of some things so I’d be prepared for surgery. Saturday was also quite fun, but nothing really fitness related unless you count running around town arranging things (my crutches, Ron’s glasses) and eating and drinking with one of my favorite couples in the evening. I was definitely flexing my biceps and facial muscles that night with burgers and G&T’s!

My other favorite moments of week 12: Seeing my friends Carver and Meegan with Dani in Amsterdam, PT with Chantor and on Sunday, Ron ran his 23rd marathon as a training (I know!) and I was there cheering him on from the sidelines! Even with some issues (mostly with his back) the guy still finished under 3:30.

Let’s make this easy, shall we?

There was no real plan for week 13 except surgery and Monday was the day. Everything went well, in fact better than I expected (knowing what it was like at the hospital two times previously, and this was at a private clinic). My room was great, nice and private and comfortable for Ron, who took the day off to drive me to and from the clinic. I arrived right at 9am and was almost immediately set up in my room, my vitals taken and my lovely hospital gown issued to me. At 10:45 I went up to the the operating room where my vitals were taken again and at 11:00 I was given an epidural. it didn’t take long until I literally had no feeling at all from my waist down and the surgeon started on the surgery. It went so fast!! at 11:15 it was done and Dr van Dalen even showed me what she removed from my foot, including the nerve ending and some built up tissue (not unlike 3 years ago, though a much smaller amount). I spent about 45 minutes in the recovery room and then back to my own room-for-the-day for a couple of hours. We were out around 4pm and back home before 6pm. Actually this was the most efficient of my three foot surgeries.

Something else that is different this time: I have to keep my bandage on until my follow-up appointment, which is Tuesday (so 8 days). Also, I have no pain. Like, really, nothing. I started taking my “prescribed” pain meds (which is a hilarious joke, yet extremely Dutch in the meantime) of paracetamol and naproxen (two items you can buy over the counter) and I stopped as of yesterday (only taking it in the morning). I did get Tramadol and I haven’t taken it. I’m not into taking pills if I don’t need them.

Speaking of pills, I will stop my Nortriptyline in another week; I am taking this for nerve pain in my foot, but it is actually an anti-depressant. This has worked for the reason prescribed but I asked my doctor if I could stop and she said “after two weeks”. I can’t tell you how happy I am to stop putting this crap into my body, especially if I no longer need it. Fingers crossed I won’t have to go back on it later.

Other than that, bored, watching a lot of Netflix and about to work on a movement plan for next week!

How was your week last week? Anything exciting to tell me so that I can live vicariously through you?