Well I’ve got a lot of catching up to do! May and June have just been nuts, but I guess you guys wouldn’t expect anything less of me right?

After the glorious, warm, sun-filled weekend we had at the end of May, I would have thought that the first weekend in June would have shown us a nice time as well. Unfortunately it was not the case.

On Sunday morning I was (or I should say “we” ) up bright and early drive to Raalte, which is in the province of Overijssel (I live in Gelderland), not too far from us, but I’d say about an hour. It was already raining and the forecast wasn’t really showing anything better. I really hate complaining about weather, because, yeah, what can you do about it, but I was not really looking foward to cycling in the rain for 4 hours. So I made a little plea to the Universe on Facebook to at least compromise with me and give me a couple of dry hours.

Once we arrived it seemed like rain was definitely going to be the weather du jour, so I sucked it up and made my way to pick up my starters pack and tee shirt. If there is something I DON’T like about these types of events, it’s the chaos of picking up your pack. I personally prefer to have everything sent to me so that I’m organised on the day. My experience is (and mind you, it’s only in the Netherlands really so tell me if yours is different in another country), people don’t queue well. Or rather, people don’t really queue at all. So there’s a lot of pushing and shoving and people tending to butt into the line when you’ve already been waiting for 15 minutes. So yeah, Leontien, take note and send us the packets like you did last year thankyouverymuch. 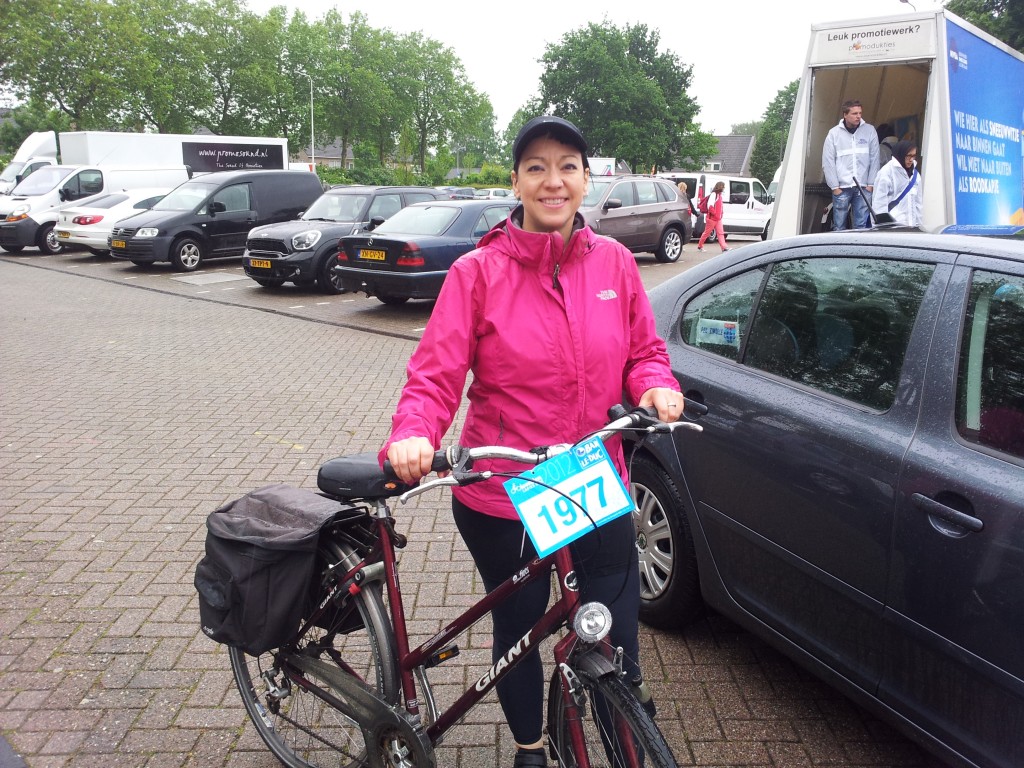 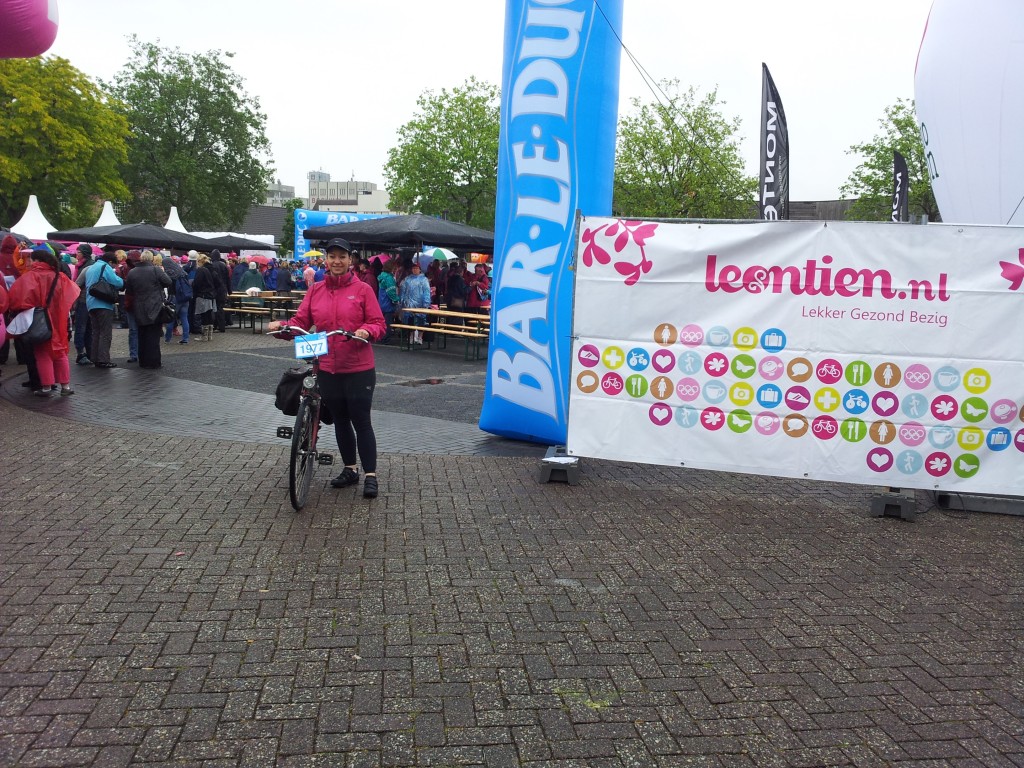 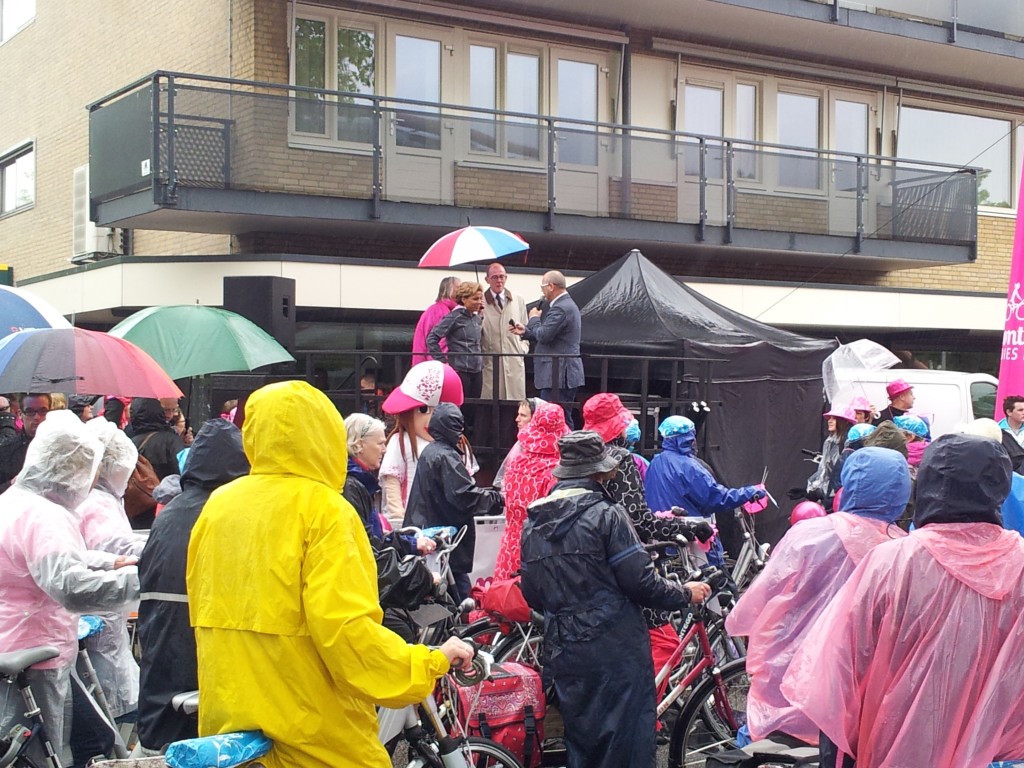 Once I was ready I wanted to head to my starting area, which was… where? Seemed like so few people in the area deemed as the “long ride” section that I went over to the “short ride” because it seemed more likely. Not the case at all! Quickly back through my section and I can hear the announcer talking about us starting like any minute so I just went up to the starting line to take off! It happened so fast that Hubs didn’t even have a chance to see me start (he was still walking towards the front).

What else can I tell you? It rained. And rained. I don’t think I really enjoyed it as much as I could have because to be honest I was just trying to get through it. The area is nice, went through lots of forests and farmlands and ended up break area just about at the time I thought I would be there. Next bit of fun was waiting in the queues for the toilets. In the rain. And of course the “free lunch” is sandwiches, which I no longer do, so I had my own stuff with me and continued on as soon as I could (there was an espresso bar there, but you had to pay for it and I had NO CASH with me. seriously? they could have let us cold ladies have a cup of coffee!! this saddened me greatly).

As if the universe decided we did in fact have enough, it stopped raining for the second part of the trip! Total time was just over 4 hours and it was 65KM and NOT 70 as expected. 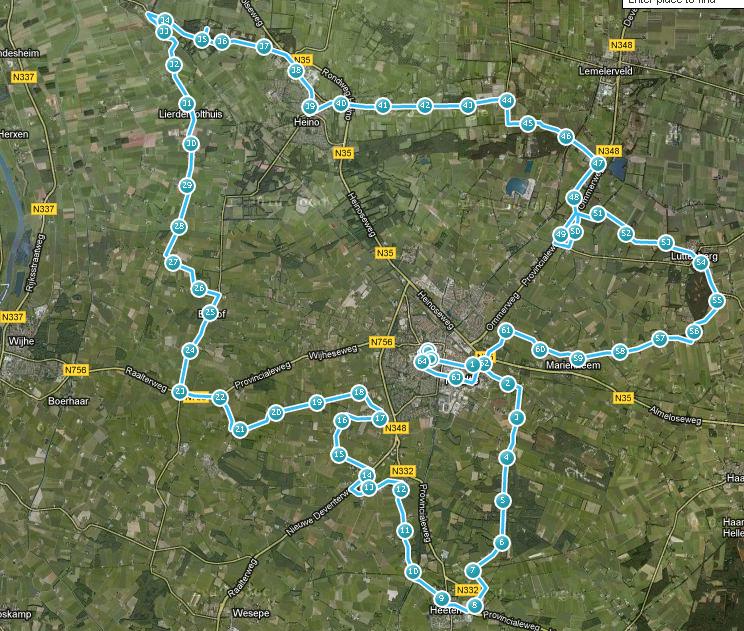 I have to say I was glad to be finished with it. I could have just cancelled all together but I really hate signing up for something and then not following through. Once I finished, hubs found me pretty quickly and we then got ready for the next part of our day (I would have preferred it being laying on the couch) – the BBQ Birthday Party for my mother-in-law. Before we arrived I’d warmed up a bit, had some beverages and some chocolate (mmmmmmm… ) so I was ready for the party. Several bits of meat later and some nice conversation, I was well and truly ready to go home and SLEEP.

Would I do the Ladies Ride again? Yes. I think I’ll wait until the second one though in hopes that the weather will be nicer. Usually that is Rotterdam, so, fingers crossed I can rope in a few friends for that one next summer (hint: Tammy, Penny… ).