*I always liked this 30 Seconds To Mars song, but now it’s on the playlist of the new BodyPump release – so it’s constantly in my head (and I have the desire to grab some weights and do bicep curls)

Not gonna lie, glad it’s the end of July.  Don’t mind me while I sit here in my bra and underwear because it’s 3gazillion degrees inside the house and not much cooler outside.  Totally normal, right?  Sure, I like a real summer season, but the Netherlands is not equipped for this, we don’t have air conditioning, for example, and at some point the fans are just circulating hot air around the house.

This means that July has been a tough month for training and such, I’ve mentioned this in my last few weeks’  recaps and it hasn’t really been much better this week to be honest but at least I’m off the Struggle Bus.  Mainly because I’ve given in and accepted that this is what it is right now. 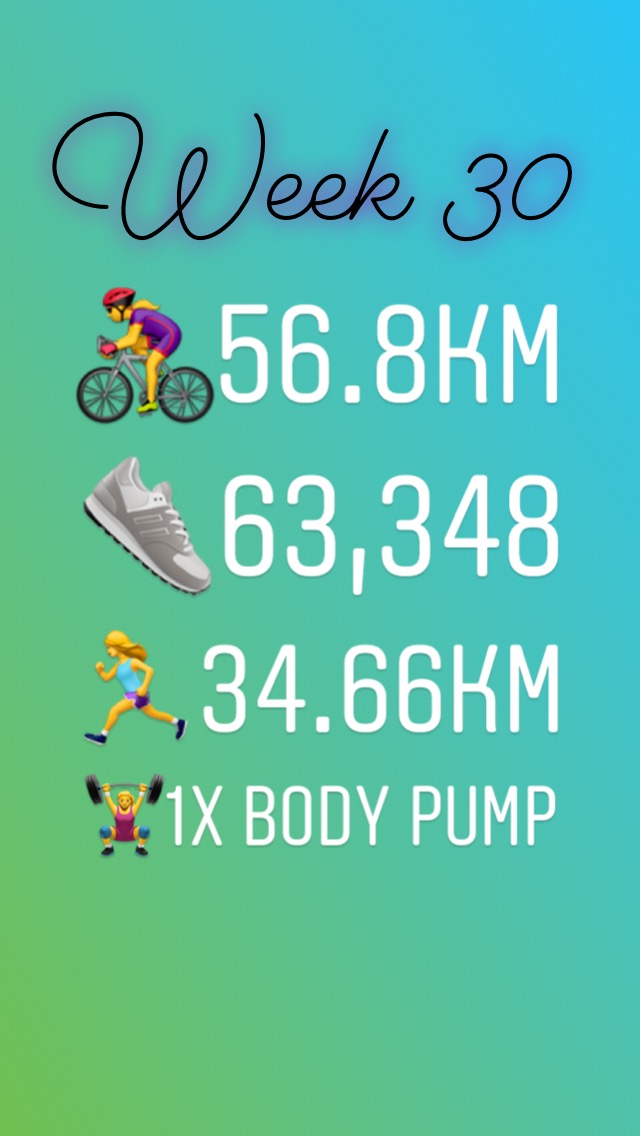 This week’s planned vs. Actual:

Tuesday – Runiversity – done  I was not really looking forward to training this evening.  It was the hottest point of the day (which is odd, that the temps just kept going up;  training is at 7pm and it was 34C (93F) when we started…  training was also not in the usual place (which is already a 7KM bike ride one way) it was about 2km further at Rijkerswoerdseplas (A small lake in our area – this is also where we do the polar plunge on New Year’s Day).  I I biked over with my running friend Martine who lives around the corner from me.  We were already toast by the time we got to the location.  The plan was a progressive 6KM run – 2 loops of 3km each km slightly faster than the one before with a small break in between rounds.   I did ok the first round, it was definitely negative splits but basically petered out at that point.  We started the 2nd round and I did try to get my speed up but it just wasn’t happening.  Oh I also had a liter of water with me and in no way was it enough.  After training we all dipped into the lake for a cool down (we all planned on having our suits with us).  That made it worth while.   I made sure that my run was exactly 6.66KM as we were basically running in the temperature of hell (yes, I know, I am being dramatic). 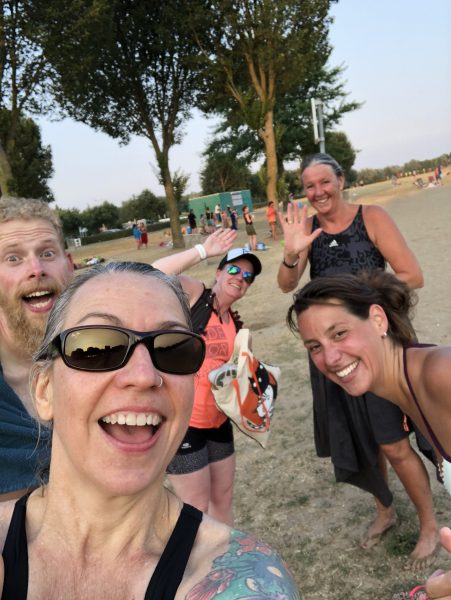 Wednesday – BodyPump? RPM? not sure yet.  Neither.  I don’t know what possessed me, but I thought I would do an “easy” run with SocialMile instead of going to the gym.  Seemed like a good idea at the time.  I haven’t been for ages and I was kind of missing a non-training run with a good crew of local runners.  I seemed to have conveniently forgotten that there is nothing “easy” about SocialMile runs these days – a shame for me because I just can’t do these kinds of things when I’m training for a marathon.  Usually there are two groups but tonight there was only one, which meant there was nothing “social” about it for me.  All the way in the back with everyone running ahead of me mostly in a group.  Don’t get me wrong, it’s OK, plus running hills is not a bad thing, I can only benefit from it.  However, I missed the “slow” group, because then at least there is a slight social aspect of it.  Never mind, afterwards the social stuff began for me.  Only after I chugged down a litre of ice cold water did I sit down outside with a cold beer chatting with friends.   Remind me not to do that again whilst in training?  Thanks.  Funny part was, Vincent couldn’t go to the gym because of a previous appointment, but he was able to get out early from and HE showed up at SocialMile, as well as Ron, so there we were the three muskateers again. 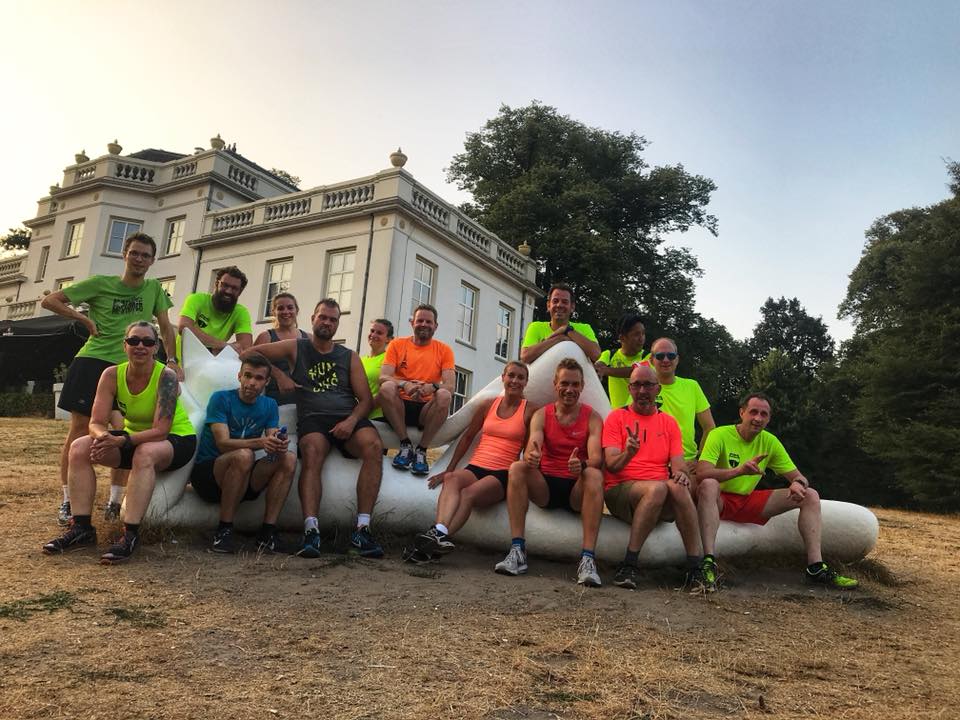 Thursday – possibly BodyPump, depends on Vincent’s schedule. BodyPump! This class is a bit later than the Wednesday class so I was able to come home, chill a bit, and eat something before Vincent picked me up. It was a great class, but tough.  My arms and legs were jello afterwards.  Good feeling though! 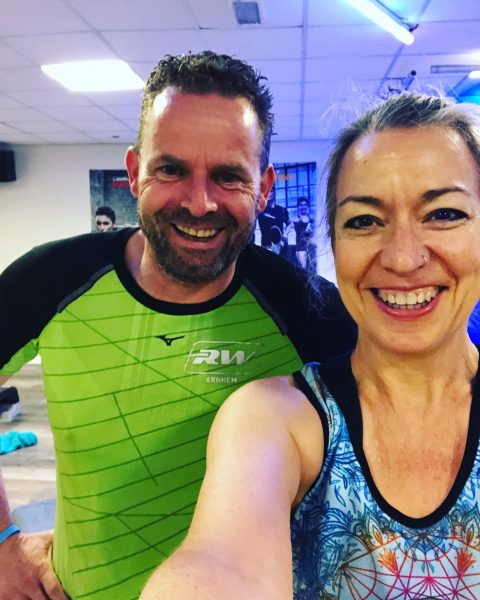 Friday – Massage clients in the afternoon, training at Runiversity. Clients but no training. Another super warm day and with no airco at the health center I was completely wiped out after 3 hours.  Also, my training group decided at the last minute to do a “mini triathlon” for training instead of what was planned.  That meant swimming in open water.  No, thank you!  Yes I could go IN the water near the edge but I ain’t swimming in it!!  Everyone else thought it was a great idea.  Sigh.  I feel more and more like an old lady hiding behind my curtains and in the front of my house there is a sign that says “get off my lawn”.   But seriously? It’s a running training group.  RUNNING.  RUNIVERSITY.   Anyway, my bitter ass decided that ice cream with my husband after clients was a better idea.  And pizza.  Yep.  We did both and in that order. 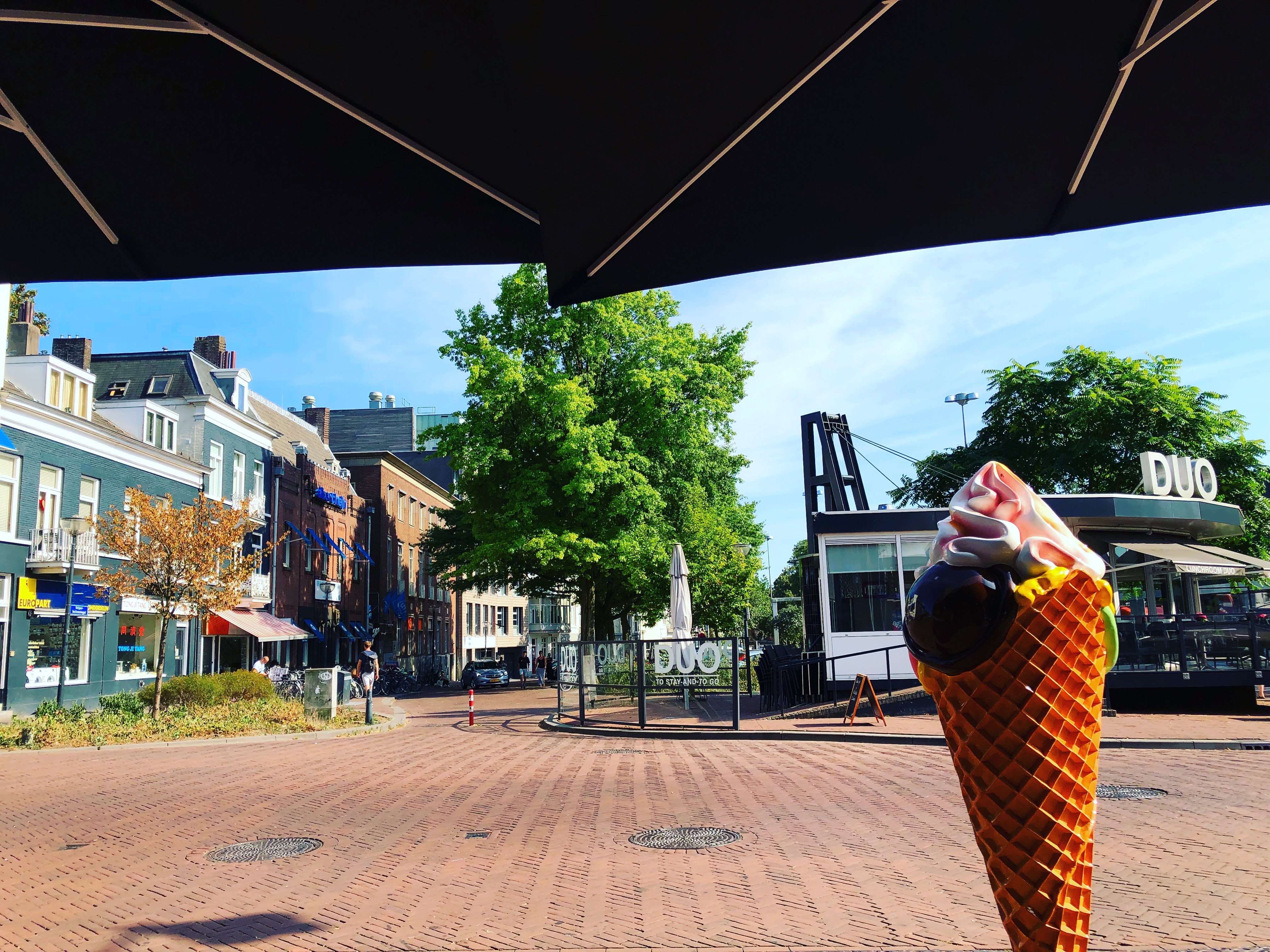 Saturday – maybe RPM but then I’m on my own. Otherwise I might do a bike ride (to work out a bike tour for Arnhem Life). Neither.  I did nothing. The hubs and I thought we’d go to the track in the morning, to run the missed intervals on Friday, but it was raining in the morning (HALLELUJAH) so we thought we’d do it later.  Later never happened.  It’s fine, I obviously needed the rest.

Sunday – the Long Run. It’s going to be much, much better this week. Well, not sure it was better, but I did 19.5KM. Ron came with me this time and at first it was fine.  The temperature was great and there was a nice breeze.  But again around 7KM my legs just didn’t want to go.  My heart rate was up and my negative thoughts were coming back in my head.  I managed almost 12KM before I told Ron to go and do his training and I would meet him back at the house.  We actually met up again around 18KM.  It’s fine, but I don’t get it.  It was going so well and now the last three runs are just crap.  I will try again next week and I think I’m going to start carbloading around Wednesday or Thursday – I wonder if I just don’t have enough gas in the tank.  Since I’m eating less carbs for weight loss, this is maybe not the best idea if I want to run 14 or 15 miles (in excess of 25KM).   I’m glad it’s done, I’m ready to rest again. 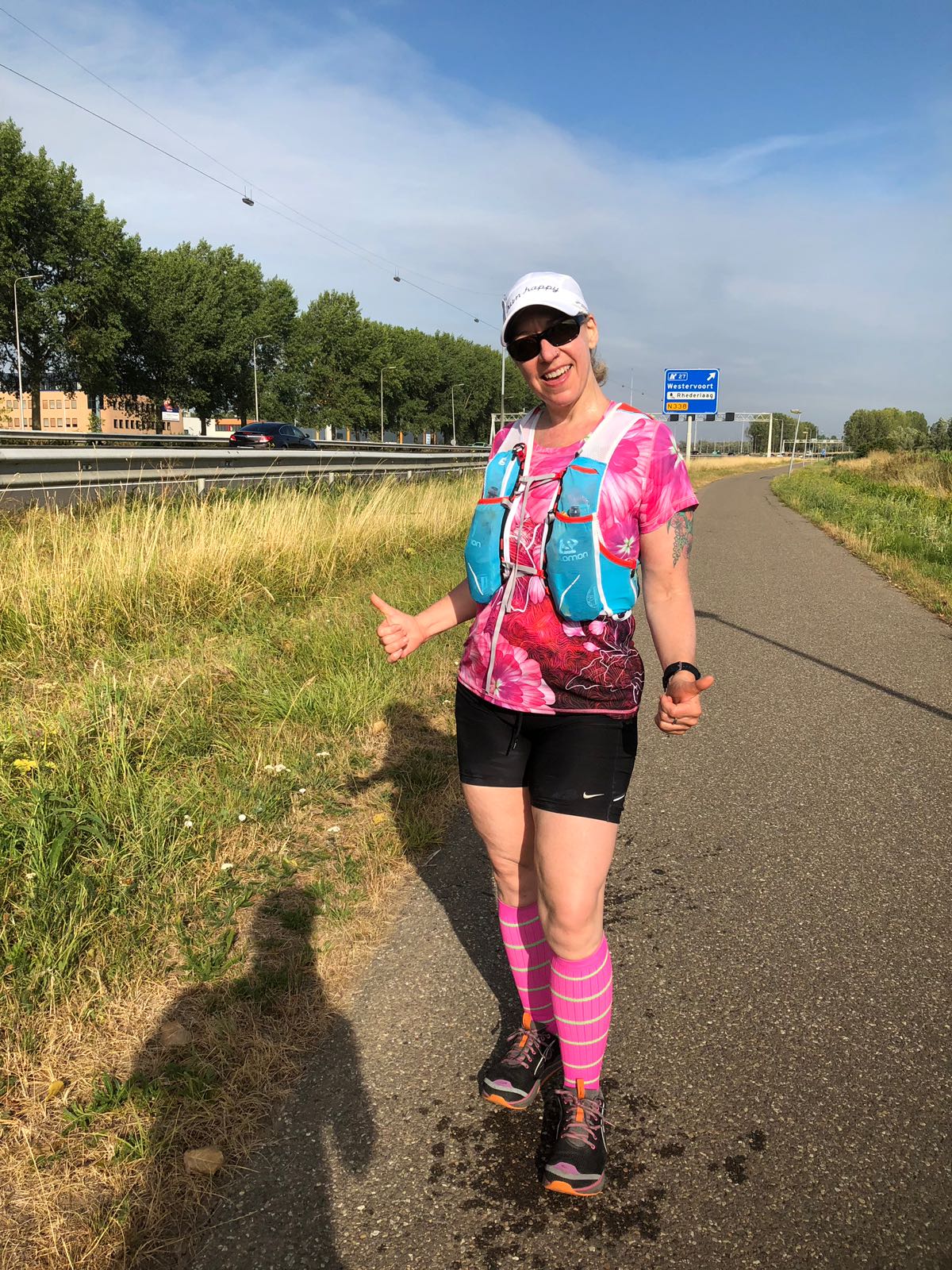 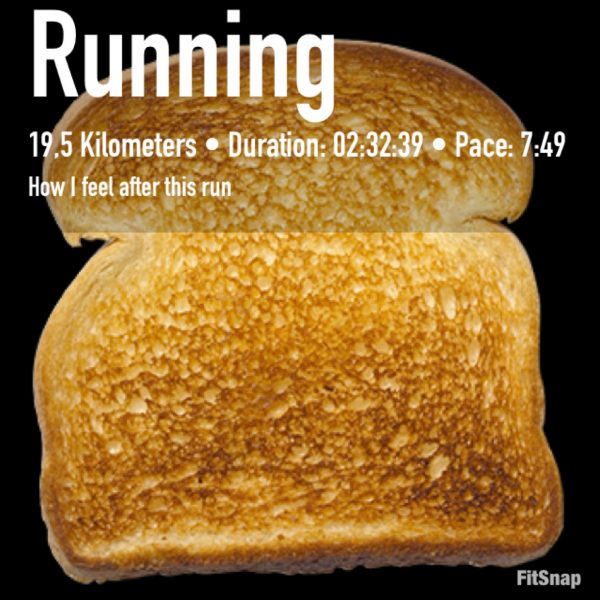 I haven’t posted about it but I’m still doing it.  This was the result of the last 4 weeks: 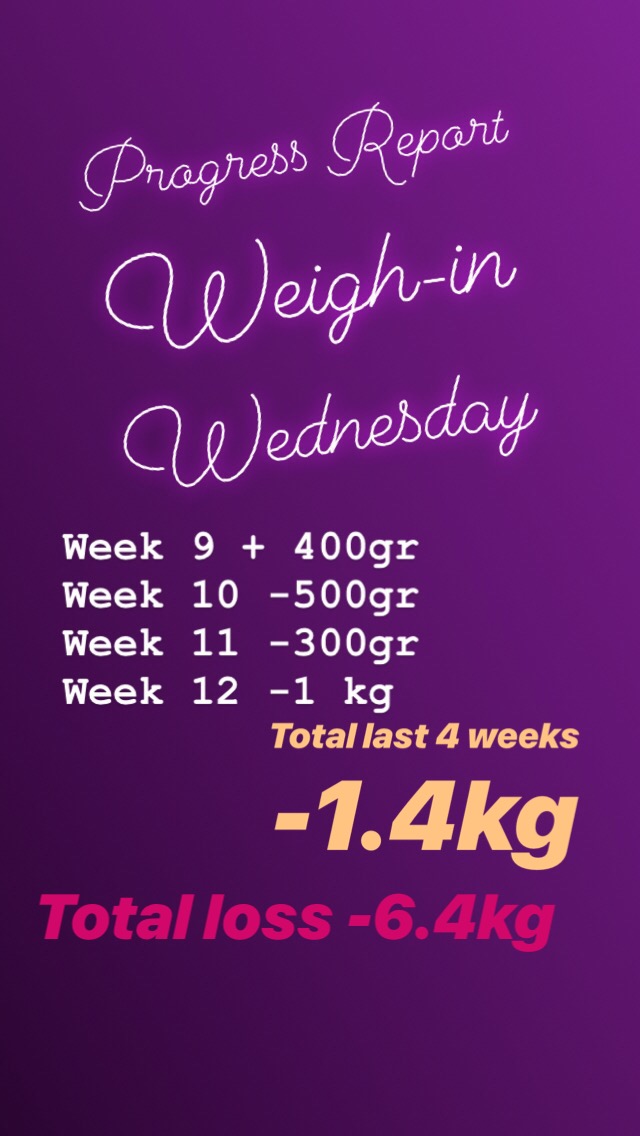 I’m going to extend my online subscription through to the end of September.  If I’m around 72KG then (or less;  as of last Wednesday I was 72.6) then I can stop the online membership and go for free to meetings in town.  I just have to find a meeting.  Since I’m a lifetime member I can be 2KG over or under my goal weight (70KG) and not have to pay for the weigh-in or the meeting and I also get class materials.  It’s so odd that I kicked WW to the curb more than 3 years ago because I felt the program wasn’t geared towards athletes with weight to lose.   It has changed though and I’m really happy about that.  I do want to make clear though – no program out there is “the one”.  You have to do the work yourself.  And… you have to make it sustainable.  This is what I struggle with the most.  And I think that’s why I keep going back occasionally to Weight Watchers because they give you the tools but YOU have to make the choice with every meal, snack, drink, whatever.  There are so many diets out there and truly it makes my head spin.  I need to get out of the mindset of wishing I didn’t have to keep an eye on it.  The fact is, I am a person with weight and food issues so I kind of HAVE to keep it in check, always.  I’ve raved about acceptance for years but seems like it’s only a place I visit for a while before moving back into denial.

how about I just sum it up as this:

There were good (really good) runs and crap runs

Work has been stressful.

There are no answers regarding my foot (no new appts for now, just meds).

We are still sorting out junk from our room renovations.

Coming up in August:

Decided NOT to go to Dublin this year.  So that’s a weekend freed up.  I’m not feeling it, I don’t really want to go alone, Ryannair employees are striking and many flights are cancelled – it’s the only airline I can really afford right now and so I can’t take the risk my flight will be cancelled.  They are NOT compensating passengers.

I still have a ton of days off from my employer so I’m just taking off from the 16th of August until the 6th of September.  Even if I don’t go anywhere.  I plan on sleeping in, running, hitting the gym and biking.  Maybe I’ll even go to the pool.  We’ll see.  Ron said anyway I’m not allowed to make any plans from 31 Aug to 6 Sept.  My birthday happens to be the third.  Coincidence?  I think not.

On August 16th I will be in the Netherlands for exactly 24 years.  I did not expect that. AT ALL.  I thought maybe 5 years in total!

Ah but I am going somewhere – I’ll be participating in the Ragnar Relay Wattenmeer on the 25th and 26th.  The relay is from Hamburg to St Peter Ording, Germany.  I’m crapping myself, but ok, another experience for the books right?  I’ll be runner 6 in van 2 – basically the 1st runner of van 2.  In total I’ll be running 27.7 km’s in two days.  The race goes through the day and the night.  Right now I don’t know exactly where I’m running because the damn map won’t load on the website.  I’ll go the day before to Hamburg by train and then after the race will go back to Cologne with some of my team (From Fat to Finish Line) and then the day after that catch a train home.

And obviously I’ll be building up my mileage for the marathon in Warsaw.  I will have my longest run in August.  I hope the weather chills the eff out.

How was your week?  Are your temps too unbearable for running?  Could you live without airco? Have you ever done a Ragnar Relay? Are you glad July is (almost) over?