The Dietitian, The Scale and Two Races

Ugh. It’s been so difficult time-wise to put together my thoughts on several different areas right now. There are only 24 hours in a day and I have to use them wisely. Sometimes that means putting the blogs on the back burner and doing whatever I need to do to get through the day.

Last Monday I went to another dietitian. At the very least she listened to me. I had 45 minutes with her as opposed to the guy at the gym where I got 10 minutes. He basically told me to follow a list and train more and harder. I needed to work out minimum 3 hours per week in addition to the minimum 2 times a week I was going running. He didn’t seem to hear the fact that I work 130 kilometres away and training 5 days a week (at least going to the gym 3 times) is just not possible. He expected that I should lose 2 kilos a week if I followed his rules. This new dietitian listened to me, did give me a list but tailored it to what I like to eat. She took into account that I often replace dairy with soy or at least goat instead of cow’s milk (not all the time, but often). She took into account that I am NOT a sandwich girl and told me that I was doing a great thing with my little salads at lunch. She told me that actually there wasn’t much wrong with what I was eating but maybe we still had to work on portion control (and I don’t disagree). She asked me if I got enough sleep. I have mentioned before that I think my lack of proper sleep has something to do with my very-often-hunger feeling but she is the first professional to ask me (I have said it to my doctor before many, many times). She said it could very well be lack of sleep that is messing with my ability to lose weight right now. It’s not for certain, so first I have to try again a few things (like what is on her list). It’s been an entire week since I saw her and to be perfectly honest, I have not followed that list to a “T” so I can’t really complain if I’m not losing any weight, right?

Speaking of which – the scale: I have been on it a few times since I returned from Rome. It has gone down and then up again, just like the usual. At this very moment (or as of this very morning) it was 80.2 KG. I have also said this before – I do not want to weight 80KG. It’s still in the overweight category. However, I am slowly feeling calmer and accepting of the fact that this is what it is right now and as long as I keep doing what I’m doing (exercise, being mindful of what I eat, running) I am fine. I feel fine. I look fine. I’m not perfect, but then again I don’t want to be. I would like to weigh less. What more can I really do if I’m already doing the best that I can? I will keep focusing on feeling good and being healthy.

So everyone knows that I had a 16K race this past Sunday, but I also had a race the Sunday prior to that – the Bridge to Bridge in Arnhem. I *only* did the 5K but it was actually my first 5K (my first actual race was in March, the Zandvoort Circuit Run 12K and then in April I did the Zuidas 6K). This was purely a logistical decision on our part (Hubs ran too) – we had the kids with us and didn’t really want to leave them alone for too long. They are old enough (12 and 9) but we just didn’t feel great about dumping them in the rain with an umbrella and EUR 10 for an hour had we done the 10K). For this race I decided to just go for it, enjoy and experience it all. Which meant I ran without my music. Six months ago I couldn’t have imagined running without my music, I always thought I would be bored or just wouldn’t be able to do it, but I’ve proved myself wrong a few times now. Anyway, it was really nice to do this race, in the city I live in instead of schlepping all the way to Amsterdam. Where I live we do have several bridges and quite a lot of hills (for the Netherlands, where the west of the country is either at or below sea level), so I knew it would be somewhat challenging as we normally just run on pretty flat elevation (at the park across the street or through some long stretches of farmland). I ran this race with a smile on my face – all of the people running gave me so much energy, and even the rain made me feel so good. I ran this race with my official time being under 30 minutes (29:58 to be exact!!), which is really a first for me. I ran this race also giving my kids an example that they, we can do anything we want to do, anything we set our minds to (my stepson seemed interested in the 1K kids run after seeing several groups running). They know I have had a weight problem, they know that we smoked cigarettes and now they have seen both of us change our lives and better our health. That makes me feel really good.

But the 16K… I’ve been working on this one for quite some time. I have only done 16K two times previously whilst training and there was quite a bit of walking involved so I was quite nervous about it. I was also nervous about the fact that there were over 35,000 participants, that this race was one of the biggest races in the Netherlands (as far as number of participants goes). I was nervous it was going to be hard – several of my colleagues had mentioned that in the past, when it was really hot, it had been really difficult. I remember a few years ago, one of my colleagues actually puked after the race. So yeah, I was feeling kind of uneasy. I also wanted to do the race under two hours and I wasn’t sure I would manage. The day of the race though, I just decided I was going to do it and do my best. I wanted to run the whole way, no walking and that I managed with the exception of 1) a potty break just before 5K (though I went three times prior, I was not going to make the whole 16) 2) I walked for about 10 seconds to drink water at one of the drink stations and 3) I walked for about 45 seconds when I had a bit of a stitch, right before the 10K mark. I was kind of hoping I could do it in 1:45, but 1:50 was probably more realistic. In the end my official time was 1:53:01. Lots of things to be proud of there; the fact that I did it and the fact that I came in before three other more seemingly fit colleagues are the two things that are in the forefront of my mind.

I have to say I really loved this race! There were so many people out, fanfare, singers, people cheering – the energy was just fantastic! I also loved the villages that we went through, really “typical” Dutch – small streets, dikes, tiny houses. Normally what is conjured up in people’s minds about what the Netherlands looks like (tulips, windmills, etc), that’s what it was. I had my headphones off much of the race, just to take in all the cheering and music. I would definitely do the Dam tot Damloop again!

I noticed in the videos that I am waddling. I think it’s time to work on technique. If you don’t recognize me, I’m wearing a pink Chicago Cubs Spring Training ball cap, like this: 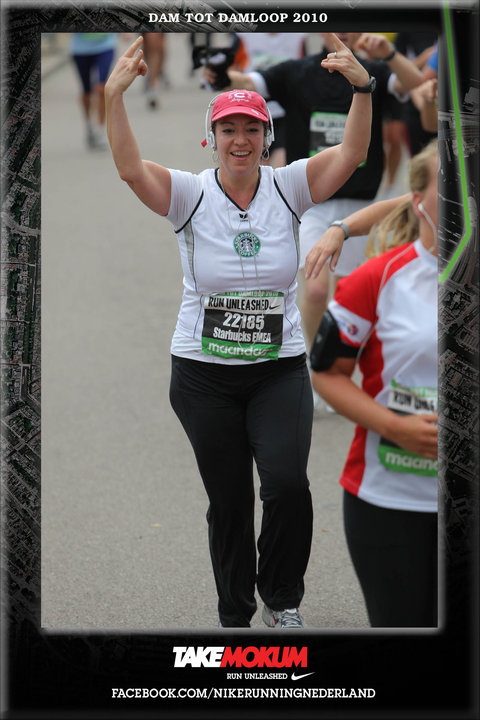 My running friend and colleague and the one who motivates me a lot of the time tried to convince me to at least do the 8K in Amsterdam (while he does the Marathon) in October, but I’m done now until November. I have too much going on and I want to be really ready for the next two races: the 9.6KM Berg to Berg on 5th of November (a night race!) and the 15K Seven Hills in Nijmegen on the 21st of November. My training will now be focused on elevation and endurance. And not waddling :)

That’s the latest and greatest – life is good! I am alive!!