Dang it I wish the weeks wouldn’t fly by so quickly! There’s a big lesson I learned this week – all the things you try to do in your own reality, it’s definitely not like on TV. You don’t transform your entire house within a week (or less), you don’t become an amazing athlete just by practicing your craft regularly, and you don’t slim down and end up in your perfect body in just a few months. This week we were on “vacation” (at least I was off Tuesday – Friday and Ron Tuesday – Thursday), trying to get ish done but I already knew it would be a challenge for me food-wise. I did weigh in on Wednesday, but I just didn’t have time to blog about it, besides I didn’t have much to say about it – I gained 400 grams (just less than a pound) and that seems logical to me as my last loss was pretty “big” (in my opinion).

Planned vs. Actual – Let’s see how it all panned out:

It’s funny I didn’t mention Monday on my plan, like it doesn’t exist!  what does that say about my love of Mondays?  haha! 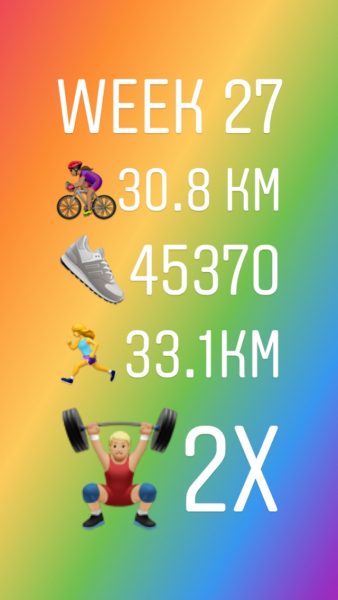 Monday was a rest day.  I had to work of course and I ended up staying later than I really wanted to, but the fact that I was off the rest of the week meant that I needed to make sure stuff was done.  Plus it was end of the month (beginning of the month is always month-end for us) so quite busy.   After work I met up with Ron, we did some practical errands and ended up having a bite to eat in town.

Tuesday I skipped Runiversity and did my own run (at 11pm even!) according to what was on my Garmin schedule. 4KM / 26 min (on the plan, recovery run 30 min).  We were actually up and at ’em pretty early, starting the renovation of the 2nd bedroom. Cleaning, sanding, taping, and painting.   Super happy with the result but it wasn’t done in one day (it’s not fully done now – at least it still needs to be decorated but we are getting there). 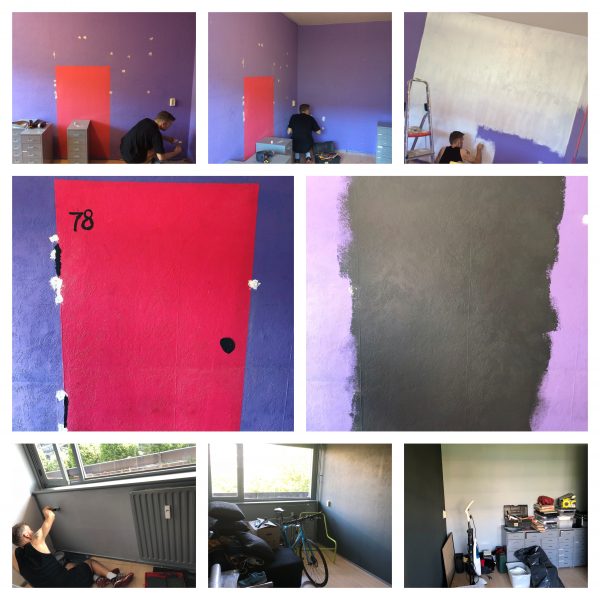 Wednesday was more of the same.   At 5pm Vincent picked me up, however, for BodyPump.  I’m glad I had a little sporty break. 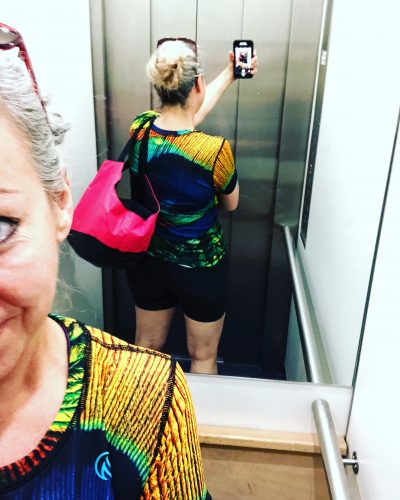 Thursday I continued going through stuff to pack up / give away or throw out and mostly organized my cupboard in the green room (that’s the first room we did).  We also put in the “gym floor” so that the exercise bike and my kettlebells, weights, and other exercise stuff could go in there.    I did have to go for dry needling at noon and that hurt like a mother.   We are not convinced that it helps, so I’m done for now with that. 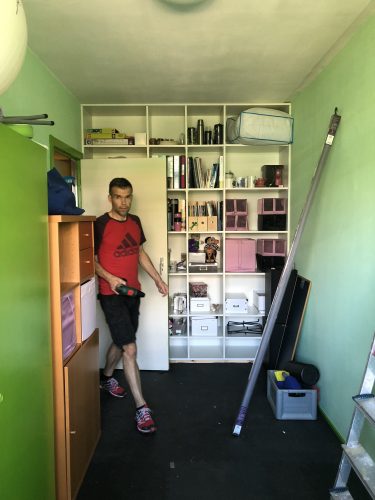 the green room is looking quite tidy now (the man too!) 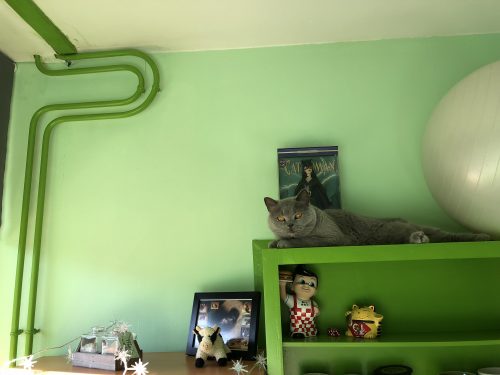 Priscilla has found a new spot. Right next to Cat Woman Barbie.

Friday Ron had to go back to work but I had the day off.  I did some more organising and then took a break to watch Queer Eye on Netflix .   I wanted to be chilled out for my exertion test at Papendal (This is where all the top athletes in the Netherlands train but little people like me can also go to run tests to see if they are in good shape for whatever endeavour they set out to accomplish.  In my case to see how things are going with  me in general and how fit I am for the marathon).  I did well on all the tests, though I’m still too heavy (“need” to be 68 according to them, I told the sports doctor I’d be fine at 72), my heart and lungs are in good shape and I’m in the extremely fit category with my V02 max (when I turn 50 I go into the Outstanding category automatically).   What didn’t change was my threshold point; it’s still at 10.5KPH and I only managed to get up through 11.5KPH and I wish I would have pushed myself to do 12KPM for the one minute and then stopped. I was disappointed afterwards – mostly because there’s “no improvement” since Dec 2015 – but even the sports doctor said that if my test was done before my foot surgery and before all the drama of recovery and injury AND I’m actually as fit now as I was then, that says a lot. I think I am, by nature, a glass half empty person so it’s hard to see it as a positive, but I’m working on that.

Afterwards I went to the podiatrist where a foot surgeon was also there working with her. He is not impressed with my story (or I should say, not impressed with how things have gone for me since my surgery) and wants me to have another ultrasound done on my foot. I’m kind of sick of it all and not sure I really want to start this up again, but my only alternative seems to be live with it and take weird medication the rest of my life. NOT super excited about that.

Friday evening I DID go to Runiversity! We had intervals on the books – 4 x 750m (so odd, usually it’s like 800’s but hey, I don’t challenge the trainer). I felt like this training went really well, even with the warming up run to the location I was feeling light and speedy. Total running: 8KM

Saturday I picked Vincent up while Ron ran to the gym as per usual protocol. Super excited for spinning this particular morning due to the new release! And it is a quad killer! Looking forward to super strong quads by the end of this one! After RPM we took Vincent home and then headed off to Ikea for more house stuff. (no wonder I got all my steps in on this day!). We spent the entire day doing things in the rooms; organising, packing stuff up, assembly things, etc. 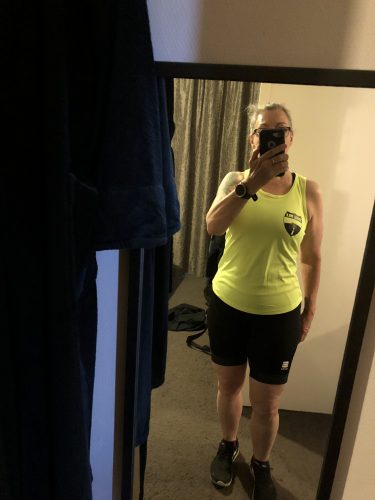 now that I’ve moved exercise stuff from my bedroom to the Green Room, I can actually use my mirror properly 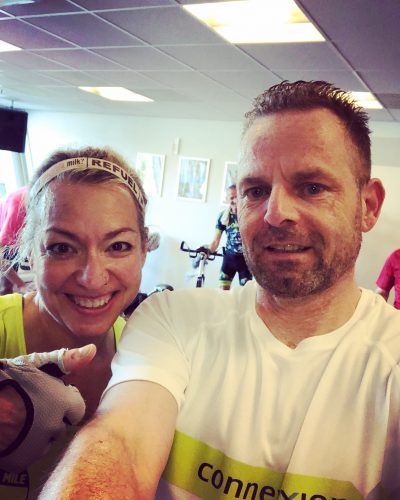 Spent the morning in Ikea and no one was harmed!

Sunday Long Run – Ron, Vincent and I all had approx. a half marathon distance on the schedule (mine was 2 hours 15 min which would have been around 20KM so why not just do the extra 1.1K? Always sounds like a good idea at the time). We planned on going at 9:30 in the morning, which I felt was already a bit late for the temperature but…ok. We met up at the train station and took the train to Nijmegen. Often we run from home to Nijmegen, this time we did the opposite. It works out to a half marathon distance.

The first 5KM went really well. Even though we were busy the whole day Saturday I was surprised my legs felt pretty good. Unfortunately this lasted until around 10KM. The last half of the run was pretty hard. It was really warm the first half as well and then later I had a really nice breeze – I was super grateful for that! But man I was warm and sweating like there was no tomorrow. I drank all the water I’d brought with me (1 liter) and around 17KM stopped off at a gas station to pick up another 2 bottles to fill my flasks. I wanted to stop and just call it a day but at 18 I thought “ok, just get to 19” and at 19 I thought “just finish it already!” I would make no sense to stop running and then STILL have to walk 2 km home!  Total running:  21.1 KM. 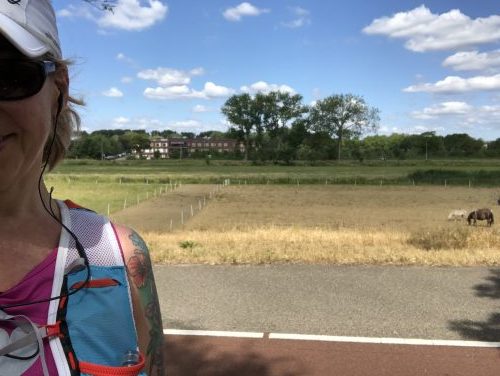 The rest of the day was pretty lazy – laying around rolling and stretching and half sleeping on my yoga mat in my “new” exercise room (with the cat), then I finally got it together, showered and got dressed. My stepson was with us for the weekend to help assemble and set up the 2nd room (his room previously) so around dinnertime we all biked into town for a well deserved beer (not the Boy) and pizza. 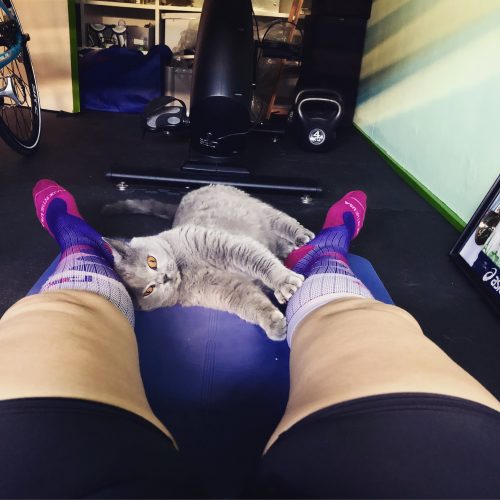 Priscilla showing me how to stretch properly 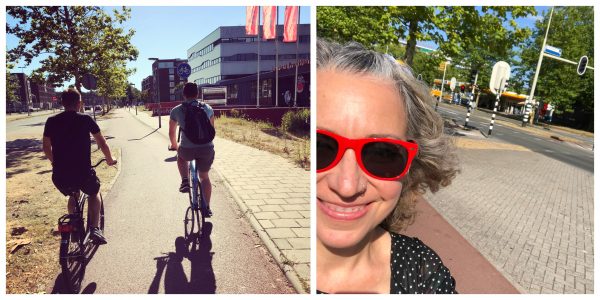 It’s not like it was a “bad” week, not by any means – we got a lot done, I still did my training and eating could have been worse (really!).   I guess I’m just ready to be back on schedule with everything again.

So, Questions!   Have you ever done an exertion / V02 max test on a treadmill?   Have you ever been disappointed at a checkup where you thought you were in “better” shape?  Do you still eat well and healthy when you are doing home projects?  Have you ever watched “Queer Eye” (and are now subsequently french tucking your shirts?)?

I’m skipping the weekly wrap linkup again because I don’t have the time to reciprocate but am still hoping to jump over and visit several blogs rest of today and tomorrow!