I’M JOINING WENDY AND HOLLY  AGAIN THIS WEEK FOR THE WEEKLY WRAP! JOIN IN WITH YOUR FITNESS RELATED POST TO GET AND RECEIVE SUPPORT FROM OTHER SUPER COOL AND FABULOUS BLOGGERS. 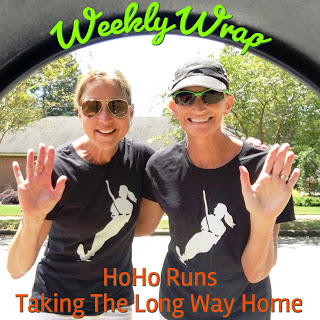 This was not the greatest week ever, however I’m kind of tired of “complaining” and want to just move on now so hopefully next week I can report something in a more upbeat manner. 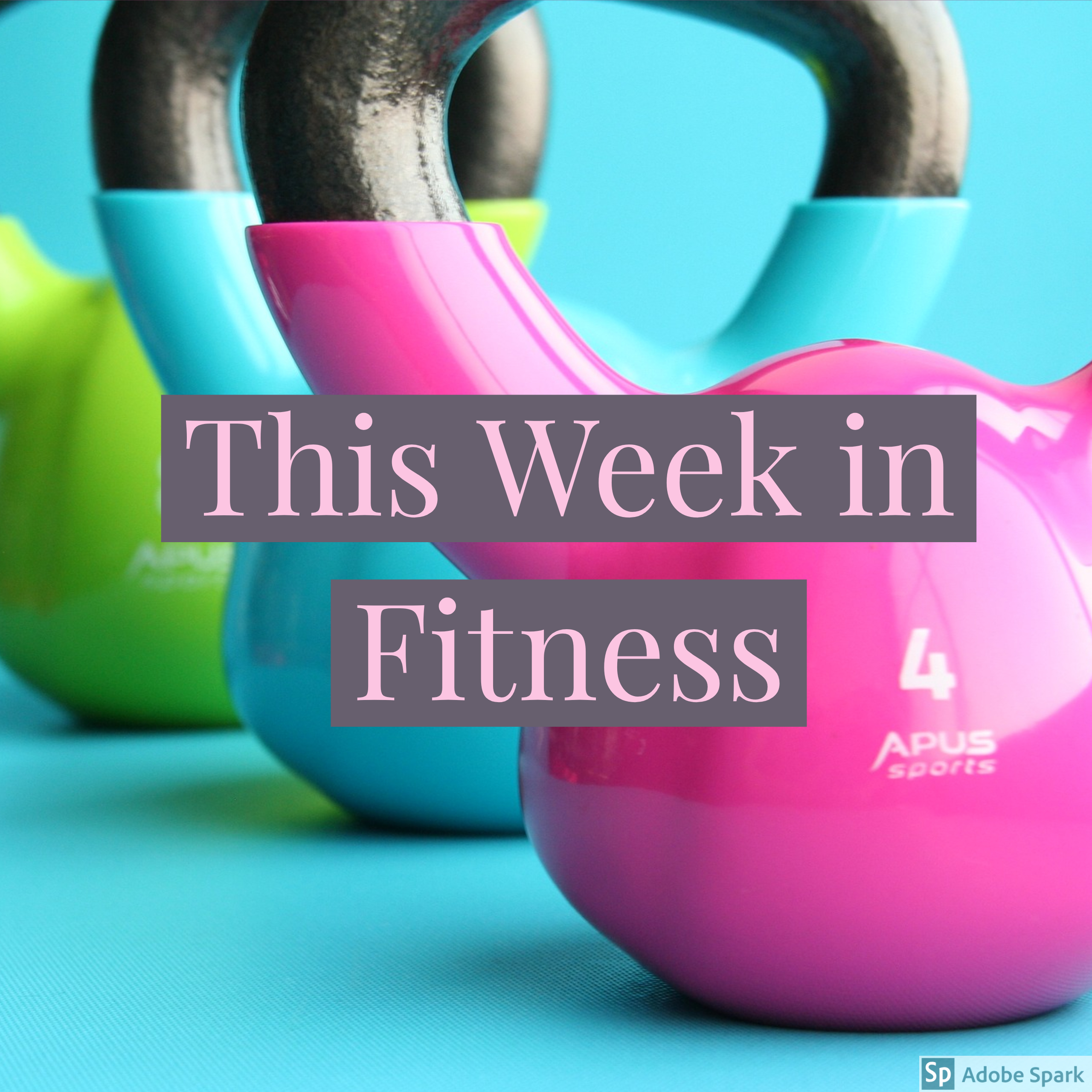 Another week where not everything went to plan; this time a combination of the weather and my own motivation levels being low.   On Tuesday I was fully prepared to go to Runiversity but around 1pm it started snowing and it didn’t stop until around 9pm!  Training was cancelled for this reason  – no one was prepared to run in the snow and the streets and bike paths weren’t really cleared until the next day.  For me it’s a no go anyway when there is more chance to slip and fall and break / damage something.  I have enough issues as it is, I’m not about to add “sprained ankle” to the list. 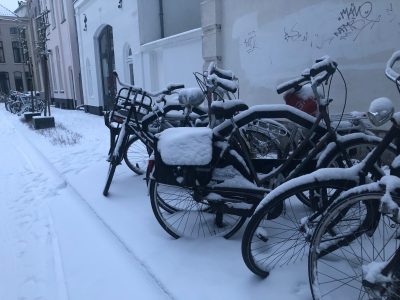 these streets don’t get cleaned right away – impossible to run in with regular running shoes!

Speaking of which, on Tuesday I also went to the physio, but until I get new insoles for my running shoes my tendinitis will remain. We decided to stop treatment until a bit later down the road.  I did ask my physio if he would help me with a recovery program so I’m still in top shape by the time I can run again and he agreed this was a good idea.

By Wednesday it was safe enough to drive so we were off to RPM. Thank goodness too! I needed that. 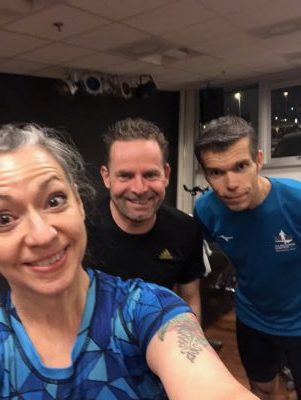 yeah! RPM night with the Boys!

On Thursday I had an appointment with the anaesthesiologist and assumed that I was fit enough for surgery (I am) and that I would be get a date in February or latest March for the operation. After all, 2 weeks before this appointment they gave me an indication that there were still possibilities in February so my assumption didn’t come out of nowhere.  Welp, I got an April date.  To say that I was extremely disappointed is an understatement.  There were quite a few ugly tears in the car when we left the clinic.   I need 6 – 8 weeks for recovery and am not allowed to run before that time. The last time I started running again after 4.5 weeks.  I often wonder if it was too soon so I’m definitely not going to take any risks!!   Six weeks = 16th of May.   Liverpool weekend is the 24th – 26th.   This means no running Liverpool (again) this year.   The 2nd time I will DNS my Liverpool races for the same reason.   I’m pissed but I’m also picking out the positives.  Obviously the most important race is Chicago.  I should be fully healed by the time marathon training starts.    I also already contacted the organisation to ask about volunteering.  I’ll make the best of it.  Just like I did 3 years ago.

Suffice it to say, I did not do my kettlebells that afternoon (I took the whole day off) and in the evening we went to my stepdaughter’s school – they were having an open house and the students all participated in presentations and workshops not only to entice new students for the coming school year but also to show the parents and family what they have been working on.  It was a good evening; we were quite impressed with the students work, but it was long drive there and back and we were exhausted by the time we got home.

On Friday I went to the movies with my friend Sheena in Den Haag. While I was on the train back home I was chatting with Ron about our training in the evening and in a way we were both trying to get out of it because the weather was about to turn crap again.  Eventually though I said “Let’s just go.  We know it’s going to be crap and that’s the worst that can happen;  if it’s not crap, it’s a bonus”   So we went and it was not that bad. However, during my 7th (of 8) interval of 800m suddenly my right knee tweaked and I had a shooting pain through my hamstring, knee and calf.  It was really going well too, so I was bummed.  I walked it out and then ended up slowly jogging back with the rest of my group. 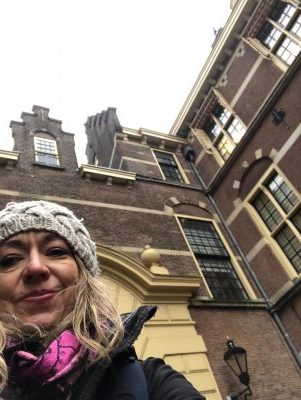 In my old “stomping ground” – The Hague

On Saturday morning it was already better so we went to RPM.  Afterwards I went home, showered and changed and went into town to meet my friend Marie-Jose, also to go to the movies.   I was home in time for dinner and spent the rest of the evening chilling out.

Ron missed BodyPump last week (and I did as well, plus I hadn’t done my kettlebells and I stopped with burpees) so we decided to go on Sunday morning! I had a 9.5KM run on my training schedule (progressive every 500 m for 4.5KM then 5KM steady) but I just wasn’t sure about my knee.  I thought maybe I would skip it all together but decided around 3pm to just go out and try.  I ended up with a 5KM run pushing several tempos to feel when the pain came.  I’m glad I didn’t try the progressive run!  The pain was definitely there at faster tempos. 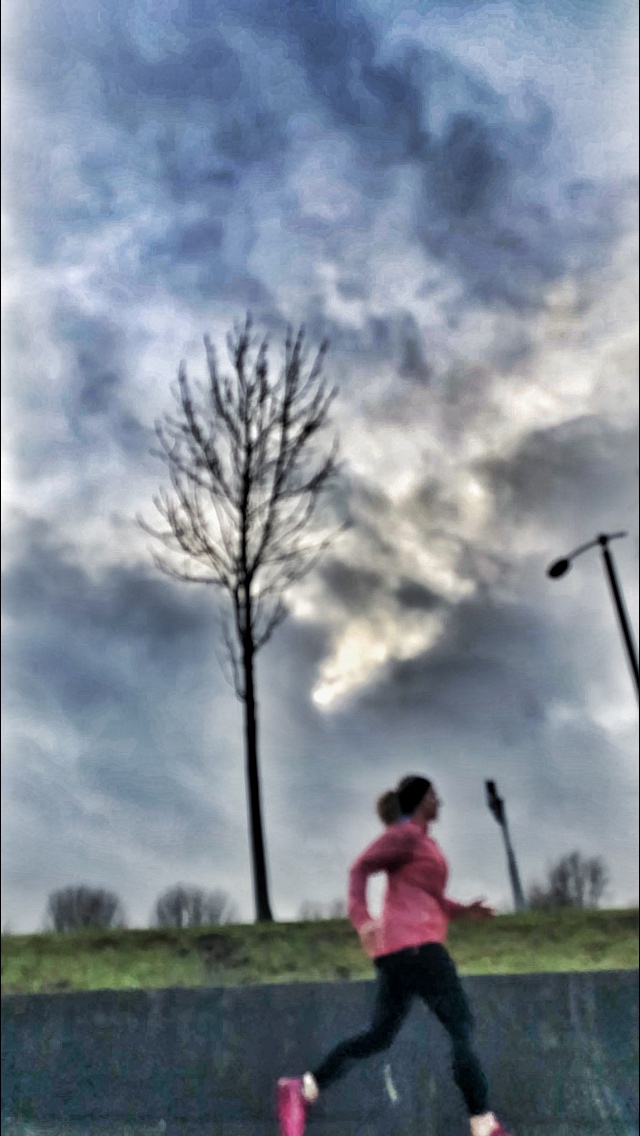 I weighed in on Wednesday with an 800g loss. I haven’t however been logging my food and I haven’t been 100% on program so I have no idea what next week will bring.  I know it’s sounding like a broken record now.  So I’m moving right along.

Since I can only start training again in May, I’ll try to do a Half Marathon in August.   But it’s all really TBD in between middle of May and the marathon in October.  Watch this space!

There will definitely be an improvement in week 5 with the things I’m slacking on.  I am proud of the fact that I’m still avoiding junk at work (and believe me, there is something here every day) and taking the stairs at home.

How was your week? Do you run in the snow?  When is your first race (or did you run a race already)?