And Now for the Real Weekly Update

In hindsight, especially after my whingefest, it was a good week.  So I went out and had two off days.  That’s better than a lot of other weeks I’ve had!

I did not do everything I said I was going to do.  I didn’t go to the gym for example, but I did other things.

I tracked my food and exercise on my online Weight Watchers program 5 out of 7 days.  Actually 5½ because I tracked on Thursday all the way up until I went to my Cupcake Workshop.  I could update Thursday even still, as I know exactly what I consumed the rest of that evening. (I can tell you this… it’s not pretty! I had a couple glasses of wine, 3 cupcakes, 3 glasses of champagne and all that without eating dinner, which led me to Burger King at midnight… and I don’t even LIKE BK!!).  So, whatever, it is what it is.

Drinking and bad eating always, always ALWAYS leads me to comfort eating the next day! On top of that I got only 4 hours of sleep (yes, it’s my own fault, so I’m not really complaining about it) – these are things that I KNOW for a fact trigger being off plan.  But this is life.  Unless I want to give up EVERYTHING – I can never expect to be successful after a night out like this.  I also know that I don’t have to drink to have a good time, but I LIKE to have a drink now and again and I CHOSE for that on Thursday.

Not to go too far off the subject of the update, but this week I also read The Amazing Adventures of Dietgirl by Shauna Reid.  If you haven’t read this book, I highly recommend you do so.  This was probably the most real Weight Loss Memoir I have ever had the pleasure of reading.  I could relate to so many things.  Not just the weight loss “journey” (I hate that word), but other things – I was really emotional at times reading it because unfortunately I relate to the low self-worth and self-esteem issues. I relate to that feeling that I don’t deserve to be happy or successful.  I even relate to thinking that people just see me as the “fat girl” and nothing else.  Shauna’s journey took her over 6 years (so there you go, it’s not a race, people) but she also lost half of her body weight (175 lbs) and actually she’s still on the journey.  That’s the point.  This is for the rest of our lives;  it’s not over just because we reach goal.   There was finally a point where she stopped with the tracking and the numbers and just intuitively worked her program.  Exercise was no longer a chore but something she enjoyed doing.  I feel like I’m a little bit at that point.  I am actually enjoying going to the gym (when I make it), bicycling (if it would stop fricking snowing), and running (when the paths aren’t thick with ice).  Every time I go out and run I feel more success than I ever felt by just counting points and seeing the scale go down.

Anyway, back to the weekly update.  If you like numbers, here they are: 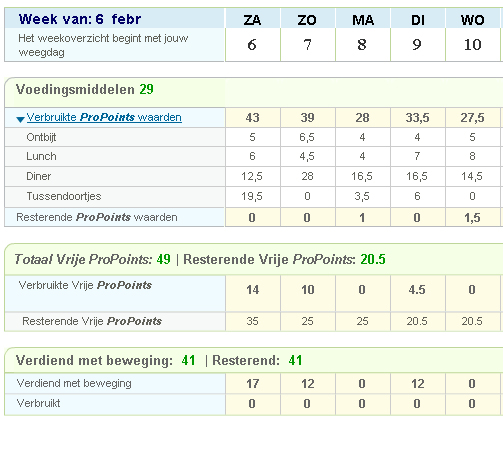 So Saturday I had 4 glasses of wine, which costs 14,5 points these days.  Normally you would not see me ever having 19,5 points for “tussendoortjes” or snacks (now my non-dutch readers can step in for their Dutch language lesson).  If you look further down, you can also see that I earned 17 exercise points.  So actually, to me, that was a good day.

Sunday was a bit high also – we made pizzas for dinner – but I went running with Hubs later on that evening, earning me 12 points.

Monday, Tuesday, Wednesday were just plain successful days.  Nothing out of the ordinary.  I went running again on Tuesday earning another 12 points.  Up until the end of Wednesday, you can see I still had 20,5 free points left (which may have covered the mess of Thursday evening, but probably not), plus ALL of my exercise points.

So, yeah.  The scale said I gained 200 grams.  No big deal, I know.  I have pretty much stayed the same, give or take a few 100 grams for 4 weeks.  4 weeks.  What do I do now?  I’m counting, weighing, measuring, exercising, drinking my water, eating only fruit and veg as snacks.  How can I move down the scale?  I’m OK with my weight right now.  I mean, jeez, it was absolute YONKS ago that I weighed 81.something KG.  I think I weighed even more than this when I moved to Arnhem 5+ years ago.  I’m just not sure of my game plan anymore.

So, the running thing.  That’s going really well I’m happy to say.  Including yesterday, I’ve run three times this calendar week, each time a bit more.  Yesterday was 10K!  So I think I can stop panicking now.  You can have a look, for example, on the Garmin site if you are interested in the route we ran.  The numbers are not mine,  Hubs was wearing the Garmin yesterday, but it’s pretty much the same (he’s a bit faster than me!).

Hubs and I also completed Week Two of the 100 Pushups program:

My plan for this week?  I don’t have a plan really.  On Monday night we fly to London and are staying there until Thursday.  Our Favourite Band is playing a Cancer Benefit at the Royal Albert Hall.  Hello! Royal Albert Hall!  Call me a small-town girl (I am, sometimes) but this is something I could have only dreamt of had I never left the US.  But now I’m going there, to see my favourite band of all time!

So, yeah.  Monday travel, Tuesday we meet up with an old friend of mine from high school (another small-town girl living in another country), Wednesday is the gig (meeting other fans for pre-gig drinks), Thursday we have some time to just wander around a bit in London and then fly home that evening.  Friday I’m going to a surprise birthday party of a friend of mine in Rotterdam.  I do have my standard plan of “all things in moderation”  and if I can manage that I think that will be success enough. Saturday or Sunday I WILL get myself to the gym, but that’s already a new WW week…

I may also not weigh in again for a little while.  I let the scale tell me how to feel yesterday and I don’t like when I get to that point of giving a mechanical object power over me.  Maybe I just need a little break.  Not a break from doing the right thing, but a break from the statistics.  Sometimes it’s more important that I feel good because of what I’m doing, not because numbers tell me it’s ok.