An Update and an Update

On Monday I totally had a post ready to write.  I was going to tell you all about my Plan for the week.  That plan included hanging in there, eating right and exercise. I’ve been hanging in there AND exercising, but I’m not super sure on the eating right thing.  It’s Thursday now, so clearly I haven’t had time to post that amazingly witty and insightful journal entry I had ready for you.

So the eating right thing – like, chocolate.  Really, who came up with this shit!?  Why am I able to resist it *most* days and then other days I’m shoving it in my face.  Maybe, just maybe, the shoving of chocolate has something to do with the brain still being in “screw it” mode and the fact that I simply have NOT been tracking.  I need to rectify that – STAT.

It hasn’t been all bad, but it hasn’t been all good.  I am not sure but I think part of the reason I’m also eating things I don’t normally eat (like chocolates and ohmygod the crepes I had this morning with whipped cream *slaps self* ) is because I’m HUNGRY.  Yes, I’m going to continue saying it, I’m hungry people.  Maybe I’m not starving, but I’m empty.  I am suffering a bit. Still.

As I mentioned before, I have cut out my mid-morning snack and have been drinking tea instead, but this is not sustainable.  This is not going to the be the way that I live my life, for the REST of my life.  So I gotta figure this out.  I just don’t know what to do yet.

I have also not had any eggs this week!  I was eating a lot of eggs (I still love them so much) but this week I had none.  The result on the scale was 1.4KG less than last week.  Was it the lack of eggs and fruit in the morning?  I really don’t know to be honest!

Something happened on Monday (which makes me think about this thing I have of having to eat every few hours) that really bugged me.  I mean, I know these girls didn’t mean anything by it but it went like this.  I made lunch for myself and for two of my colleagues (last week they both gushed over how gorgeous my lunch was and to make a long story short they begged me to make it for them as well and even gave me money!) which was the following:

Now let me make it clear: I do NOT feel that this is a huge amount of food. I eat a lunch similar to this daily. Well at least I change out the protein and the dressing if it doesn’t fit. I told them I would make the exact same thing for them on Monday. Which I did.

One ate about 3/4 of the lunch and to be honest I have never seen her eat that much EVER. So, ok. Even another colleague said he thought she would explode because she’s so skinny and just really never eats that much.

The other one ate less than half. I made a joke as if she didn’t like it and she said “No, I loved it! I just don’t eat so much food!” This one I would also classify as “skinny” but was dieting this summer because apparently she was a kilo too heavy. (Don’t get me wrong here people, I KNOW it’s all relative and when people feel like they have weight to lose it doesn’t matter how much, the feeling is still there. I’m sure there are people out there right now who scoff at my *only* 30 Kilos to lose in total. Whatev.)

So if I don’t eat very much I will be skinny?  (For the record I do not want to be “skinny”.  My goal is to be at the teetering edge of overweight and healthy BMI)

What if I’m already eating less?

It makes me wonder… do “normal” people feel hungry too and they just don’t eat?  Do they feel fueled?  Do they have enough energy to exercise, with so little food?  Is my brain and my body so effed up at this point that I simply can not eat less food?

I do not recall this being such a struggle the last time I was actively losing weight.  Really.  It’s hard and that’s ok.  I am in this for not only the goal but for the rest of my life.  I’m in this for my health.  I’m healthier now than I have been in a really long time. But damn, cut me some slack now!  How can I even celebrate a loss this week when I know I didn’t exactly do it in the right way?  And if I keep shoving chocolates in my mouth, well, it’s not going to stay off either now, is it.

Last bit of news, got my number of my first race Sunday – I’m nervous as hell, but I just have to get through it now.  I ran nearly 13K on Sunday, but only 6KM on Tuesday.  Tomorrow we are going again, maybe just for 7 or 8 KM.  Don’t want to push it too much.  I figure I’ll run 5KM, walk/jog 2KM on the beach and then run again 5KM.  We have 105 minutes to complete it.  Piece of lowfat pie :) 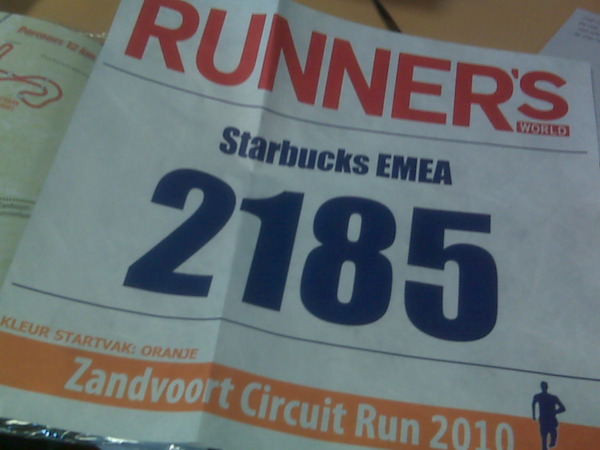