I’m no longer linking up on the weekly wrap, but if you are interested in my posts from the last few weeks you can find them here:

Week 27 – And I Keep Moving Forward

I do appreciate that people take the time out to read and I love having interaction via comments; thank you for stopping by!

I’m finding out that the less pressure I put on myself, the better.  At least right now.  This week was about going with the flow…

Monday –  Normal work day (well, “normal”) I had Runiversity (Intervals) to go to and decided not to go because of the “new” foot issue.   I thought maybe I could manage a little round around the park or some kettlebells – I did neither.  I thought maybe then I would do them after my client on Tuesday… 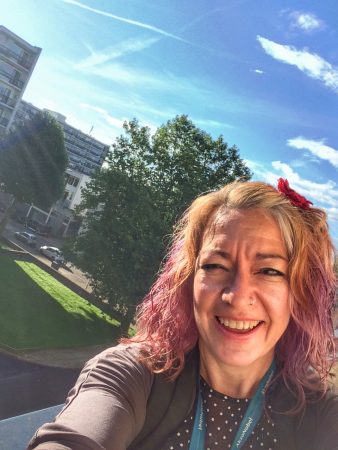 putting on my Happy Monday face

Tuesday – regular work day again, and I had an 18:00 appointment with my client from last week.  I worked a full hour,  then I went home, ate something and basically was completely done for the day.  No intervals today. 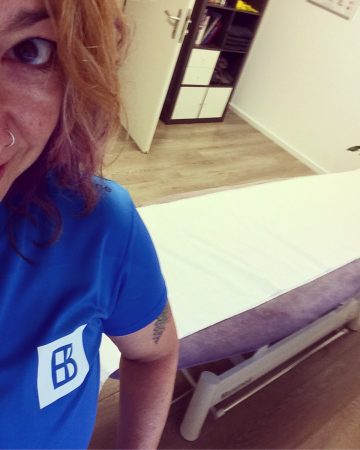 Wednesday – last day at work this week, since I took Thursday off (and Friday I’m always off!).  I got a last minute request for massage and decided to take it and while I was preparing to go to the location I got another call!  So two new clients on Wednesday!  Afterwards, though, I was beat.  I was still planning on doing my intervals!  Didn’t happen.

Thursday –  Day off, but… I made an appointment with the podiatrist on Tuesday, so I was up early for that.   Basically I wanted to check with her what could possibly be going on.  So she checked and measured and tested and she decided to have another pair of insoles made for me.  I probably did something wrong … because the last month or so I have been running withOUT my insoles.  I didn’t need them after surgery on my right foot and I thought they were really for supporting my foot when I HAD the neuroma in my left foot… but ok, good that I discovered this sooner rather than later.  She could actually see that i was putting different pressure on my left foot than on my right because of the nerve pain in the toes, so I probably will always have to wear insoles from now on.  I can handle that.

After my appointment I went into town to drop something off at a friend’s shop and decided to go in for a hearing test. This is one of those things I’ve been saying I am going to do and then I never do it.  Several months ago I had my hearing tested at work and I promised my colleagues and my husband I would get an official test as soon as possible. Since the first time I had an “attack” of vertigo (BPPV) I’ve had a pretty bad ringing in my ears.  Like I just went to a concert only non-stop.  I have a lot of trouble hearing people in regular conversation, so add Dutch to the mix and sometimes I’m lost.  It gets pretty funny around here sometimes when Ron and I are talking to each other.  Totally whacked conversations.   Anyway, they pretty much confirmed the same thing that work did, and explained to me that my “score” is not high enough to warrant a hearing aid but it’s real close (I have 32 in my left ear, 28 in my right – 35 is where you get a hearing aid).  It’s not that I WANT a hearing aid, but sometimes I zone out, especially at work because I just can’t hear and I get so tired of asking people to repeat and / or say “I really can’t hear you”.   I need to now go to my GP so that she can properly refer me to a hearing center here in town to help me deal with the tinnitus.

Afterwards I headed home, hung out for a bit, did laundry, the usual day off stuff… then took care of some packages I needed to send and later headed out to the gym for my training at the gym.  This was a lesson in the punching bag.  With the way I feel lately I have a feeling that thing is going to come in handy, haha!  I did a wee bit of cardio as well and some bodyweight exercises and then I cycled home again. 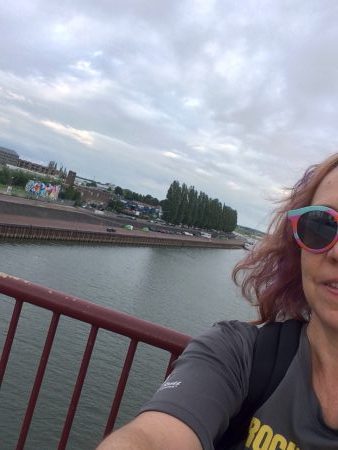 Friday – up early again, this time to go to the orthopedist!  Ron decided to come with me, in case they were going to give me the runaround or even worse, not listen to me (like last time), but his mean look and stern voice wasn’t necessary.   After telling this new (to me) doc the story and what I had already arranged with the podiatrist, I asked him for the solutions.  He said – orthotics, a cortisone shot, and if necessary surgery.   He didn’t quite get the part where I told him I’ve been wearing orthotics for years and he wanted me to wait until I got my new ones to see if it improved.  I told him I was already doing that, the pain was there before and during orthotics and it existed as well before my surgery.  I said “I want the shot!”  and he said “ok I’ll go get the shot!” *cue being slightly shocked and unprepared for it to happen right away*

So yeah, I GOT THE SHOT!  But now, no running for, officially, a week.

The rest of the day was more typical day off stuff and since Ron was working from home, as soon as he was done we went out for his training run, with me on the bike of course.  Afterwards we ate and watched a few more episodes of Orphan Black. 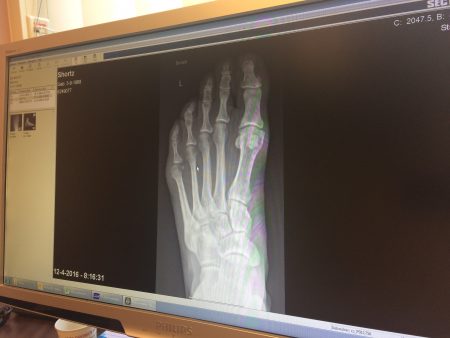 Saturday –  didn’t have to get up too early, but I had an appointment at the gym at 12 for kettlebells.  My knee has been hurting (for unknown random reason) since Thursday morning so it was just as well we did not have Primal Movement at Runiversity.  I finally had more of a feeling about the gym and I’m certain it’s something to do with the trainer.  I told Ron on Thursday that I’m not yet “in love” with the new gym and it is kind of far away so I’m really glad I have such a cheap month to make up my mind rationally. 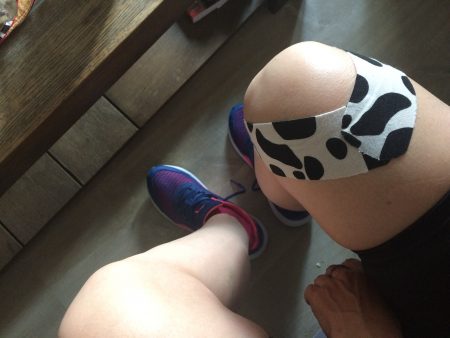 knee taped and foot ready for the gym

After the gym I dropped off to buy The Man a yogamat for his stretches at home and then took a longer way home just to enjoy the sunshine.   Once I got home I carried on with my project in the kitchen (it’s a disaster, needs to be cleaned and cleared out) and that took up several hours of my day.  Cleaning is not fun, but needs to be done, amIright?

Later on we had a lovely dinner, watched more Orphan Black and hit the sack at a fairly decent hour to prepare for Ron’s long run Sunday.

Sunday –  Runday!  Ron made a date with Vincent to run 25KM and I went as bike support.  I think the guys really appreciated it!  They hadn’t run together for a while and are now both officially training for a marathon (cue feelings of FOMO) so we were stocked with gels and water bottles and hydration packs!  We pretty much had 3 of the 4 seasons as well.  Lovely sun, then wind and a bit chilly, rain and then sun again.  But they did it!  Tons of hills and bridges and at an amazing pace.  Super proud of these guys! 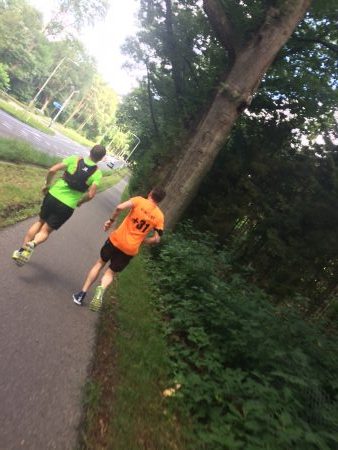 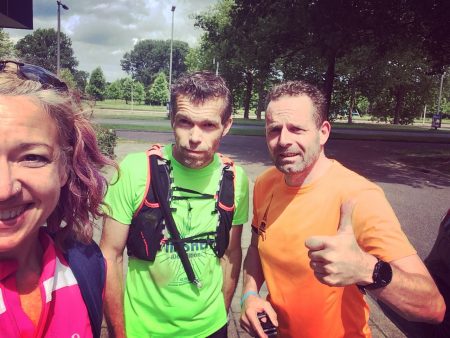 Oh, and I did do a kettlebell round in my bedroom BEFORE we headed out as well.  I always say it and I never do it… I really want to do something EVERY DAY even if it’s just for 15 min. 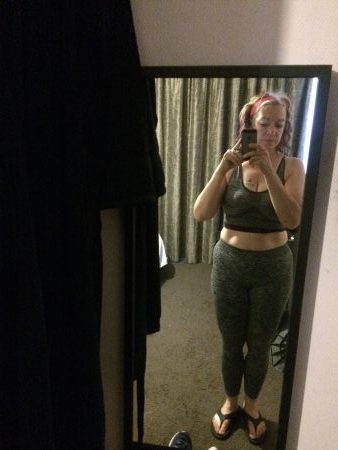 After the run there was food, showers, hanging out and later we went out for a burger and a beer.  I totally spaced it because I didn’t realise the actual date, but Sunday was 14 years to the date that we first met each other.  That was most certainly a life-changing event!

I definitely have been going with the flow lately, I still don’t feel that great mentally – I AM trying, I’m trying to push through, I’m trying to find the positives, and there were quite a few.  I want to be able to push myself again, to do things that are necessary for training, to eat well because it’s good for me (healthy food goes often by the wayside when I don’t feel emotionally well) and to actually enjoy doing that stuff.

So tell me –  Do you do Kettlebells?  Do you wear a cute outfit to work out in even if you are at home?  Do you ever feel like you are just going with the flow rather than taking hold of the reins yourself?