Sometimes I say I can’t even remember what I did yesterday, so I thought I would try to recap my weeks on Sundays, to celebrate the good stuff and perhaps learn a thing or two from the not-so-good stuff.

Last week Sunday I didn’t do much. We had the kids last weekend and pretty much did a whole lot of stuff on Saturday (including me going to the gym AND buying a new couch). I have this little ritual lately (since last spring) where I sit down and take the time out to do my nails and just have a little me-only time. Kids were busy with homework, nails (the girl does her’s too) and lego and the Hubs was busy with his computer-creative stuff. Sundays are our Pasta days – Hubs makes his own sauce and basically we always know we’re in for a delicious treat for dinner on Sunday evenings! Before bed, I did a bit of prep for meals coming up for the week.

On Monday, I was all ready for a good week food-wise but mentally not totally ready for the stress of the week. A colleague made me blueberry muffins for helping her out with something – literally gave me a plate of 12 muffins!! This is something I struggle with – when people give food gifts how to say no? I mean she went out of her way because I helped her when no one else was able to and she was thanking me; isn’t it rude to refuse? I gave all of them away but two, and promptly ate those. I left work early, because I knew the next day would be the long day, got home and had leftovers for dinner – lasagne and chile con carne. I did not log those two items at My Fitness Pal. It wasn’t much, we just split what was left (it could have been one person has the chile, one the lasagne, but we both wanted to share). Here’s a lesson: figure out how to count these types of dinners, i.e., get the recipes in MFP! Once we were all digested, we went out “running” – half walking, half jogging:

All in all I may have come close to breaking even for the day, but I don’t really know, because I didn’t calculate calories for dinner.

Tuesday I planned my food and logged it, but it looked too much like I was going to be over for the day if I didn’t come up with a solution for dinner quickly – I offered to make fish, rice and veggies instead of hubs cooking and if I hadn’t gone to the candy jar again I’d have been under my calorie goal, but as it was I was *only* 86 over for the day (thanks to very careful weighing and measuring out dinner!).

On Wednesday, again planned the day for food and watched my intake but I had an appointment in town with some friends and I knew I was going to eat dinner out. I counted 700 calories for my dinner, though I just really don’t know (We had greek). Instead of having only wine (I don’t usually drink during the week, but on this occasion I did), I opted for two waters with lemon and then two wines in total. According to MFP I was over 287 calories (this is why I do not lose weight!!).

On Thursday the plan was to go to the gym, so I packed my bag the night before and got up early as usual to get my food ready. I was planning on buying a salad at the supermarket to eat in the train on the way home, but they didn’t have what I wanted. I ended up with a pasta salad that was only 500 calories and actually quite delicious! This, plus my yoghurt and fruit was enough for dinner. I got home, got my stuff and cycled to the gym. I worked out for about an hour, came home, did burpees and passed out in bed.

Friday went a little bit wrong. I prepped my food for breakfast and snacks and planned on something “light” at work. I thought what I chose would be fine, would be reasonable, but it wasn’t. This is why I don’t eat a lot of bread – I had two pistolets, 1 tomato, 65g of egg salad and 65g of sellery salad. This cost me over 600 calories! Usually my lunch is around 400. I had a salad with me as well, that I ate as a snack but by the time dinner rolled around I had only 200 calories left. I had plans to go out for drinks and dinner with a friend and my husband and we had Tapas and Wine… we we all know where that put me at the end of the day… Lesson learned: prep every day and don’t just assume two little sandwiches are going to be a light meal!!

Saturday I was a little bit hung over. Well at least I felt tired, and was craving savoury food and normally I don’t have real cravings for anything. I had a hearty breakfast and cycled to town to do some necessary shopping and to get my hair done. Ended up having quite a savoury lunch as well. Hubs made a curry for dinner (but a very low-fat, healthy curry) and we had a few glasses of wine (I swear, I’m not an alcoholic). We did do our grocery shopping together and I made sure to get plenty of things needed for lunches and snacks the upcoming week.

Today I’ve done a bit of hanging around, catching up on the web, cleaning, folding… the normal Sunday stuff I guess! I did go out for a “run” 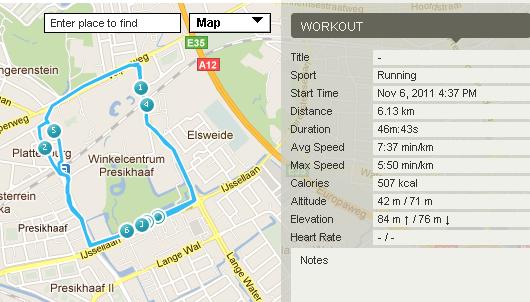 Hubs has made our pasta for tonight which was delicious… I love pasta after running! Now to calculate my calories on MFP…

I’ve prepped quite a lot for next week, planning most days up until dinner. I’m out with a friend of a friend on Wednesday (a girl who is a friend of a guy I went to High School with is in Amsterdam), but I can control that situation well because we’ll only be together until about 8pm (I can eat the pasta I had in the week from the Supermarket). On Thursday I go back to the physio, so I’m working from home that day and will go to the gym after my appointment. One other day this week I’d like to try to go for a “run” again – probably Tuesday, and I want to cycle at least once if it’s not raining. Staying active and staying in control really helps my mind-set; even if the scale doesn’t move, I can do what it takes to make me feel good, right?

How was your week? Did you learn anything from it, even a small lesson?